An afternoon in the 'Capital of the Lake District'? That's not official, by the way, but Ambleside and Bowness-on-Windermere are the only other credible candidates before you run out of water at Kendal.

Not quite a full afternoon here, it's already been said the 'Lake District', you see, and there's no way SlyBob are going north of a Winston Churchill for a three-hour stay in the big car park off Heads Road. Going south, more like, for there's a lake that needs a right good looking at before a browse around town that last let Bob loll around in the late '80s.

It's under an overpass or over an underpass if you'd rather to reach Lake Road, which is a big clue. To the busker with the ukelele, some fine work there fella, seriously, and you're very welcome but Mr Blue Sky is very optimistic, what with today's cumulative cumulus.

Derwent Water isn't one of the district's largest, nor strictly a lake, neither, even if it is 10 miles to walk right round. It takes a quarter of that time to cruise it, just not today since last night's wind still hasn't fully died down and conditions are still considered too choppy to set sail, shame. Settle instead for a short stroll down to Friar's Crag and John Ruskin. John Ruskin? No, SlyBob's never really heard of him, neither.

The London-born, Victorian critic became an adopted Cumbrian and is celebrated in local slate with his recollection of first visiting here as a five-year-old.

He would later write on subjects as varied as geology, architecture, myth, ornithology, literature, education, botany and political economy, all of which are given equally considered coverage elsewhere amongst this nonsense, right fans?

Theatre by the Lake (Lake Road)

Ruskin may well have had something to say about the productions at Keswick's idyllically located Theatre by the Lake. Some famous faces have passed through the repertory including, well, anyone who's ever been in Coronation Street. That's unnecessarily cheeky but it does include one of their founding patrons, Dame Judi Dench, no less, who cut the ribbon in 1999 and it's nationally known to those looking for an 'in' in the industry.

There's a diversion on the way back through the previously overlooked Hope Park. It's much as you might expect with formal, Interwar-era gardens, remote-controlled boats and a form of golf that's never quite as crazy as advertised. 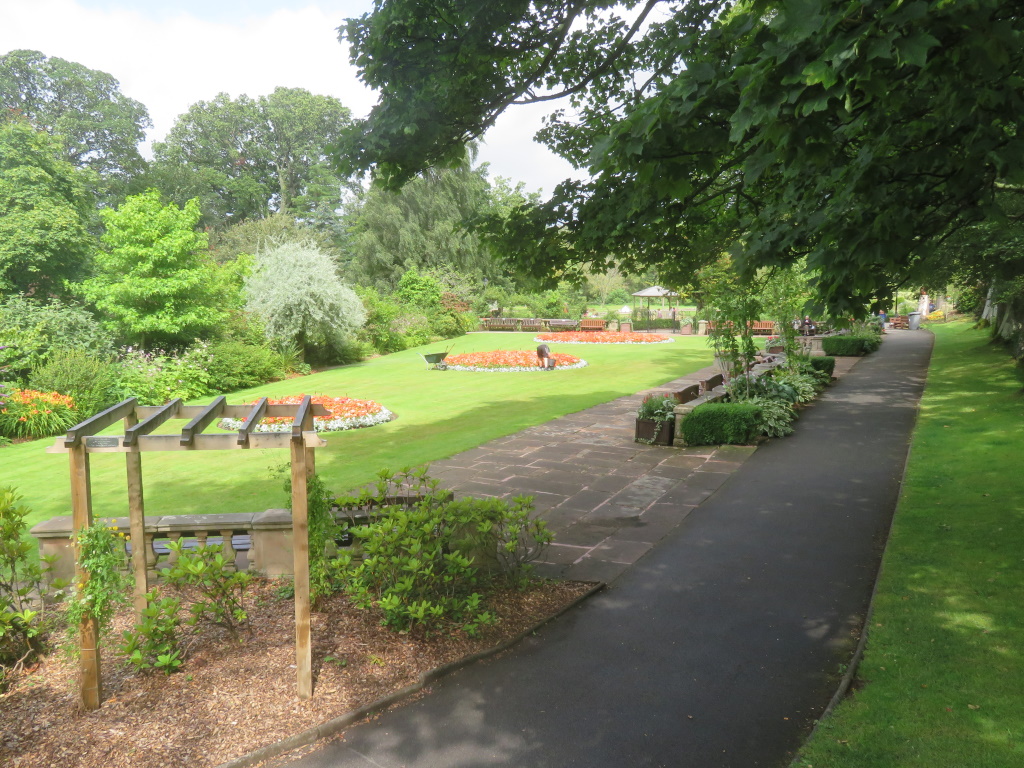 When there was no hope left for Sir Percy, whoever he was, it was donated to the town and is now run by a charitable trust whose ice creams help fund the upkeep.

Not then, as presumed, by the local council where austerity might have explained the reason for the wild flowering but, whatever the whyfors, it looks bloomin' marvellous. Other highlights include the Wedding Cake Tree, not shown, making for a procession of newlyweds in June, no doubt.

That perfect snap with the romantic backdrop will have to wait, however, as they all huddle in the underpass waiting for the latest shower to pass, probably.

Back through the underpass and it's up towards the Wainright, West Cumbria's Pub of the Year (Runner Up) although which year[1] isn't specified exactly. 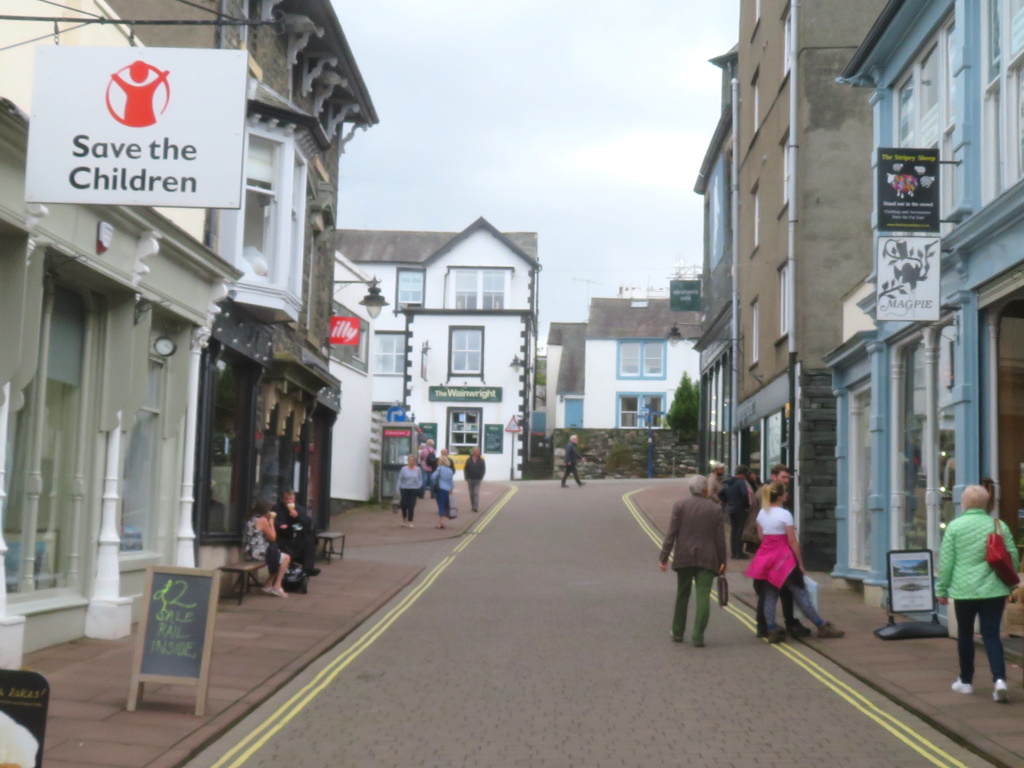 Beardy blokes are more than welcome but not those of the hipster variety. The award was handed out by CAMRA™, you see, so any requests for a Single Hop Amarillo will be met with a stern... 'That's not CASK son!' Probably.

It's left to Keswick's centre and that most Cumbrian of all the delicacies, the Cornish Pasty, but a right and up brings you to the Alhambra Cinema. Opened just before the first of the World Wars, it's one of the oldest in continuous use in the UK so not so much your typical Art Deco rather more red-brick Edwardian. Not so much  Gone with the Wind, neither, more 'with the wind gone' and, wouldn't you know it, the sun's now out, just about.

That makes for an excuse to ignore the shopping up along Station Street to arrive, past the war memorial and over the bridge, at Fitz Parks, Upper and Lower, no less.

Now, they're not exactly short of open space in the Lake District but this is Keswick's prime piece of public greenery. It's prime enough for a café-cum-museum but not the famous one full of pencils, that's around here somewhere but details are a bit sketchy. This one's largely rock-hard artefacts[1] and fine art, the café that is, and that's a joke, of course. The scones aren't really so solid but as for the museum, that can't be commented on. The car park clock is ticking and have you seen the time?

[1] Yes, that is how they're spelling it nowadays.

The Keswick Cricket Club's wicket often doubles as a polo pitch, water polo, that is. The River Greta is frequently full, you see, and here provides for some of the overspill. 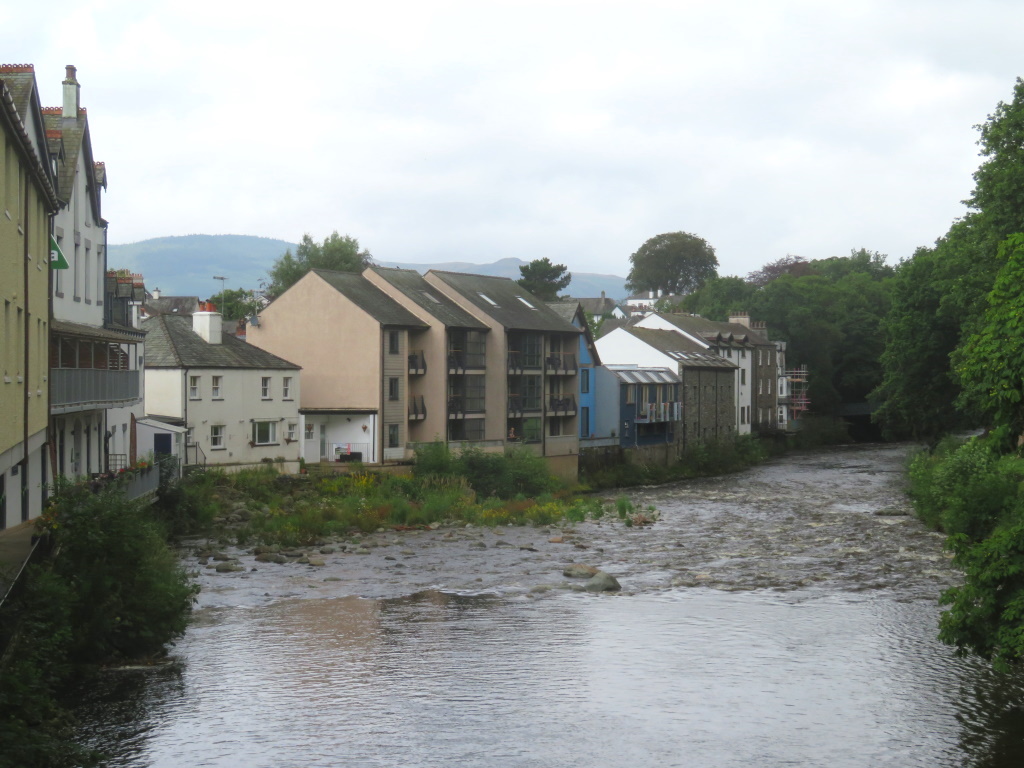 Flood-watch obsessives will already be familiar with warnings for the 'River Greta at Keswick, Keswick Campsite', which is a long-winded way of saying 'Keswick', really. When there's ever an autumn without a warning, that's when things will have become really worrying, climate-wise

The new footbridge was necessary thanks to a visit from Storm Desmond who took the original on a trip halfway to the theatre in 2015.

It's over that and right to reach Stanger Street from where there's a fine view of town and beyond. That looks to be Cat Bells[1] in the background, Cumbria's most climbed hill, they reckon. It's relatively modest, just shy of 1500 foot, but on any given day in August, every family from the flood-free campsite will have the same idea.

It's like that now-famous photo of Everest and with some of it quite steep, it's all enough to make you mutter 'Hells Bells', more like.

The locally quarried slate stone walls and matching roofs along Stanger Street couldn't be any more Cumbrian and, just for once, you couldn't just about be anywhere.

It's just one of the distinctive and delightful sights in these parts and every single one of these turn-of-the-20th-century toff's townhouses is now a B&B, some even operating as the 'Air' variety, right kids? Not quite so delightful is the more modern Museum Square that's largely shopping but home to the Puzzling Place, a curio of optical illusions and handy for when it rains, again.

Equally puzzling is why it's called Museum Square since the museum, as you well know, is back in Fitz Park and do you know what? Nobody else seems to know, neither.

The shops around Museum Square cater largely to hardier, outdoor types preparing for base camp up Cat Bells. Just after the cars are barred from Main Street, though, this is more like it with all the trappings for the day-tripper. The Moot Hall is, debatably, Keswick's main landmark and much of the mooting was between landowners over who owned what and where.

It's the Tourist Information, these days, with a Himalayan craft fair upstairs, today, and the chance, perhaps, to pick up some yak bells.

The Himalaya connection is a bit of a stretch, however, Cat Bells is just shy of 1500 foot, remember?