'Who do you think you are?' No, Bob's not being cut down a peg for being a bit of a big-head, Sly's only gone and gone all genealogical. Her two-week free trial with Ancestry.com™ has just run out and yes, some fake details mean they only think they know who we are.

The results are in and there's a great grandfather going back to Nairn who moved to Gateshead in the 1860s, married a lass from Alston and the rest, as they say, is... FAMILY!

That's a good enough reason to go somewhere not been to before and that includes his doorstep. 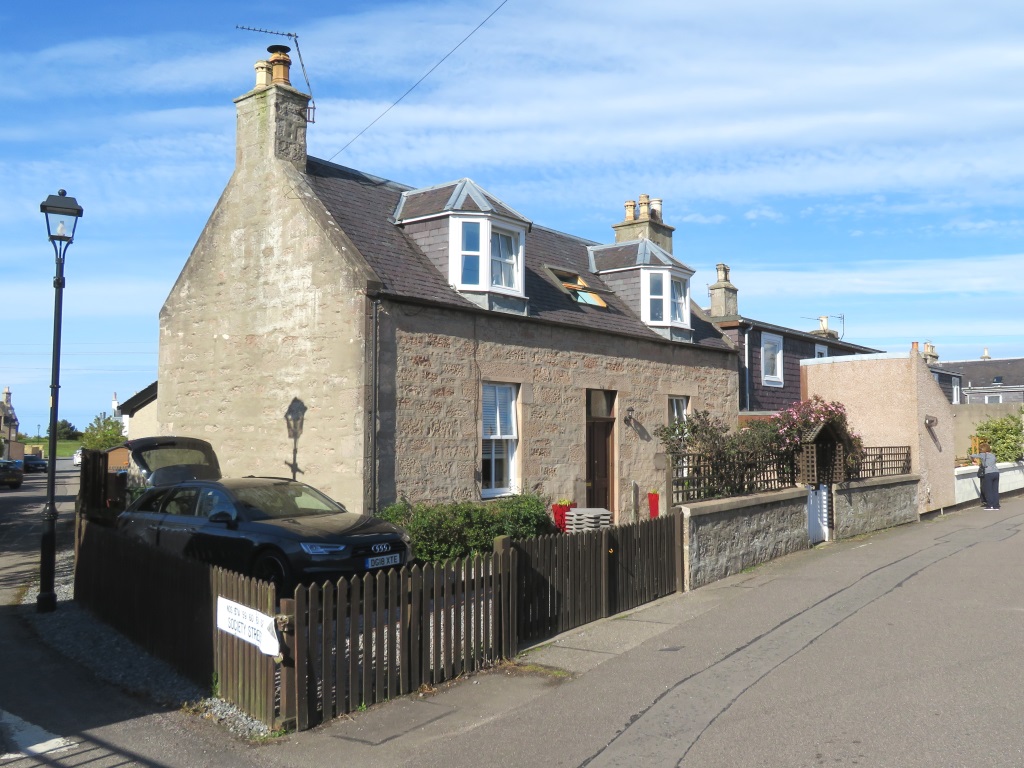 Ten of them once kipped like sardines in here and might go some way to explaining his exit south. Tracking him down took longer than expected, though, several, same-named streets all run parallel off a main one with that name.

He would have moved away earlier but those train tickets kept getting lost in the post, possibly.

Nairn's premier, pub-with-outdoor-seating provider, probably, and after a couple of crafty, draughty ones you'll be wondering why you went self-catering. No comments can be made on their brilliant looking burgers but can on the friendly staff and the, not too, lively bunch of locals who are absolutely killing it at pool.

This is Fishertown, a small area of narrow streets that was once, indeed, home to Nairn's fisherfolk. These terraces of traditional, stone cottages have since had their lofts extended but themselves extended the area up by Thomas Telford's new harbour in 1820. 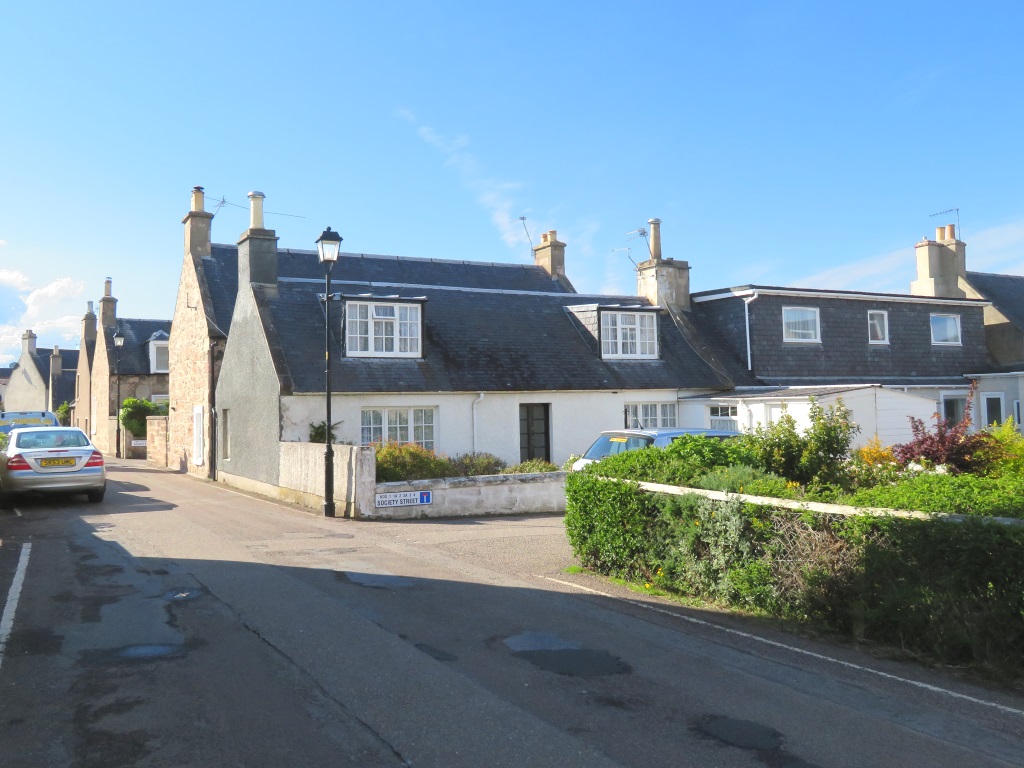 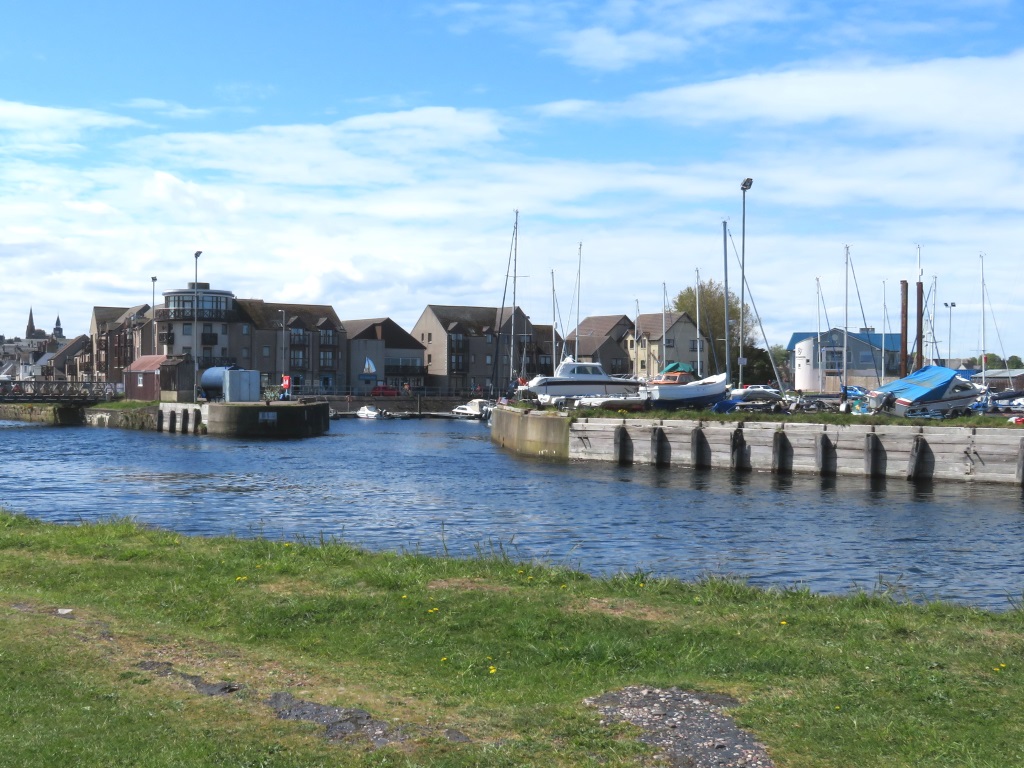 This was boom time, fishing-wise, but by the 1930s, and with the industry in decline, the even newer harbour provided far fewer berths for the bloaters.

Nairn has an interesting history linguistically, no honestly. The area to the west and up into the Black Isle was predominantly Gaelic speaking but to the east, they spoke Doric, a dialect of Scots specific to the north-east of Scotland.

This is stuck in the middle and both tongues could be heard prior to suppression with, literally, clans to the left of me, Jocks to the right,  here I am, all week.

The river cuts right through here and flows out into the Moray Firth at the Maggot. Some say the name's down to the once rotting fish on the boggy plain in summer, others that magh is simply plain Gaelic.

Either way, there's a loop to be done under the road bridge, along the river then over and up into town via Jubilee Park, it's thought, and it's all rather rambletastic.

Head east from the harbour jetty along the, quite frankly, fantastic stretch of white sand that's hard enough in places to not be too much of a calf-killer. 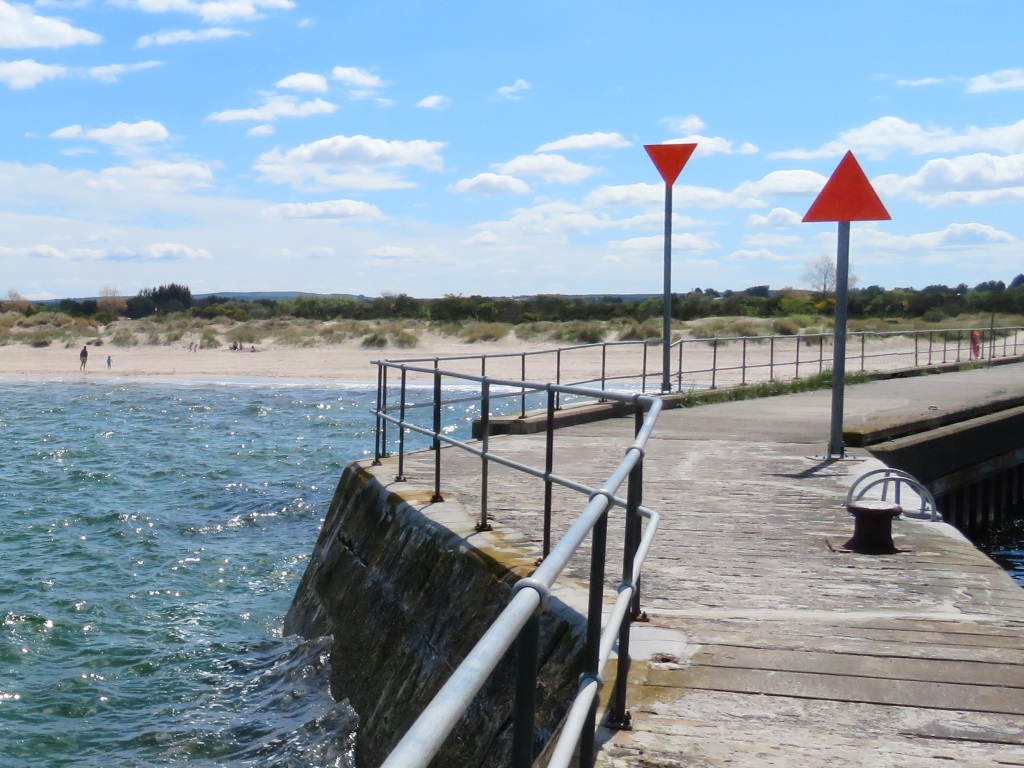 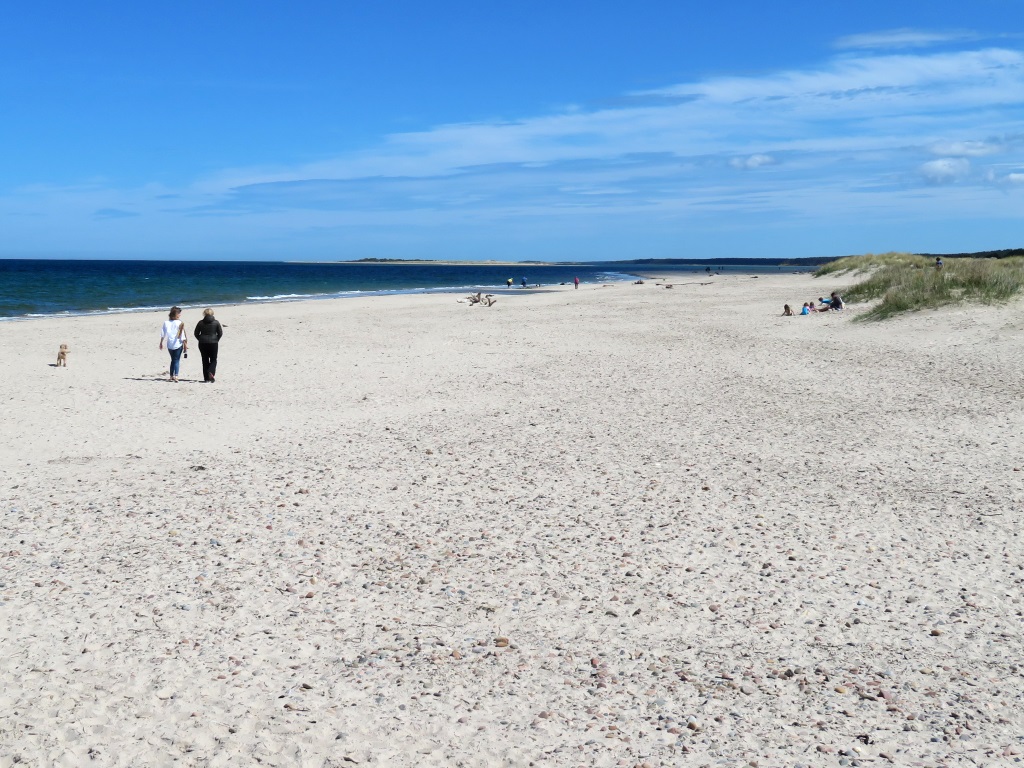 This all gets put to good use since it's bang in one of Scotland's driest[1] and sunniest areas with the caravan park testament to that. A school-pod-colony of dolphins in the Moray Firth also adds to the attraction but there's no flipping sign of them today.

[1] Admittedly, that's a bit like saying it's one of the warmer parts of the Antarctic.

Bar and restaurant that's Nairn's newest and all New England with marvellous views over the firth just not on Sundays or Mondays. The reasonably priced surf and turf are thankfully separate and the sommelier's impressed at the choice of the Picpoul.

Little does he know, it's only been ordered because it's sort of been heard of, it's not the second cheapest on the wine list and SlyBob's both going with the fish.

The caravans soon give way to woodland but Culbin Forest isn't as old as you might think, it's a 20th-century invention put here by the Forestry Commission, Alba branch.

It stretches eight miles to Findhorn with the restored sand dunes and the largely pine plantation helping to prevent further erosion of what was once the 'Scottish Sahara', they say. 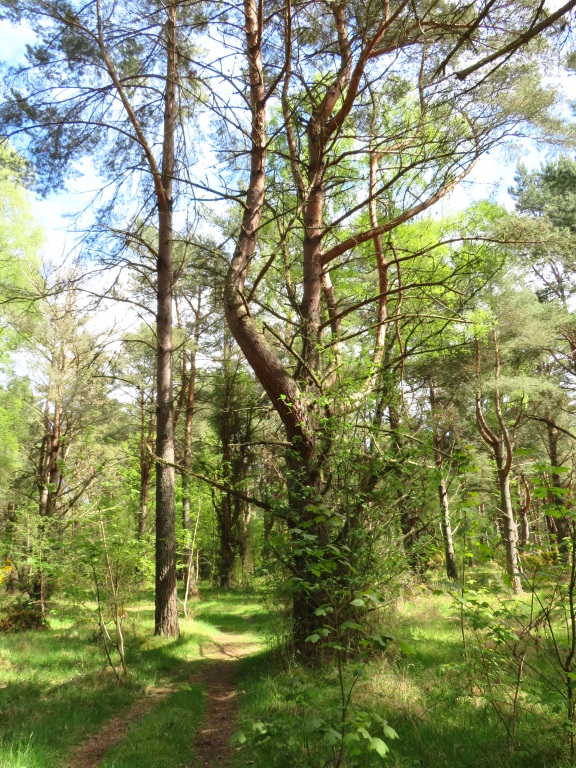 There's a small loch in here that you too might fail to find emerging instead near Kingsteps in a slightly irritated, older lady's back garden even though there's no sign of no No Entry signs.

Meanwhile, back in Nairn, the main road south of Fishertown has been crossed to reach the town's high street. This all had a major facelift when the Victorians arrived with the railways and just about retains the period feel. 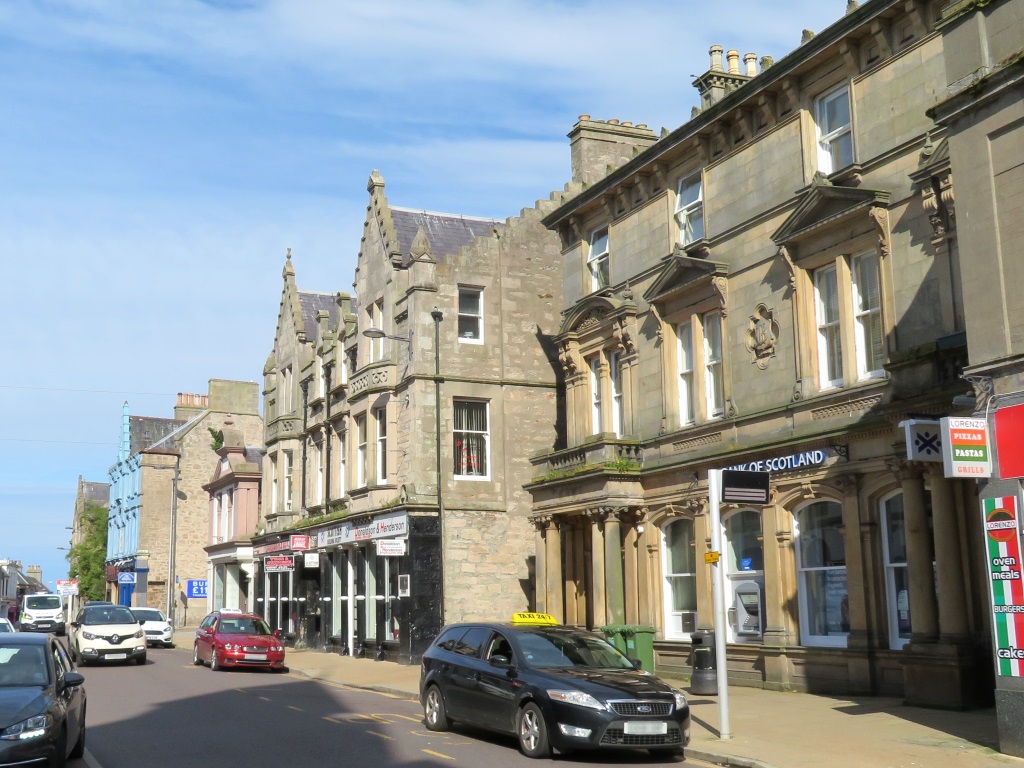 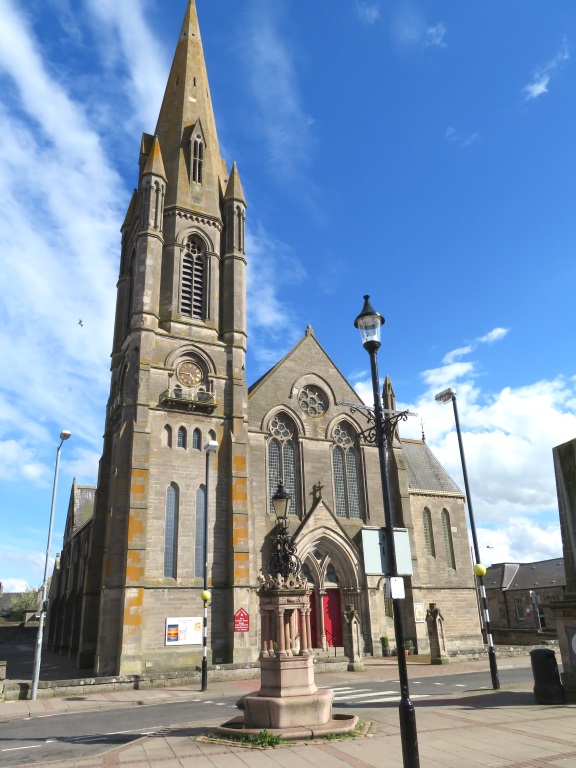 Highlights, architecturally, include St Ninian's Church, which dates from 1881, and on further investigation, doesn't actually appear to exist on the Google™!

They've been trading along here since the 1100s, at least, although it's more the 0900s, or earlier, these days. Despite Nairn's reputation as a seaside resort, things are slightly disappointing with nary a knick-knack[1] to be had.

It's best described as, erm, functional with a good line in tandooris and takeaways, discount shops and the odd independent that didn't quite make it. 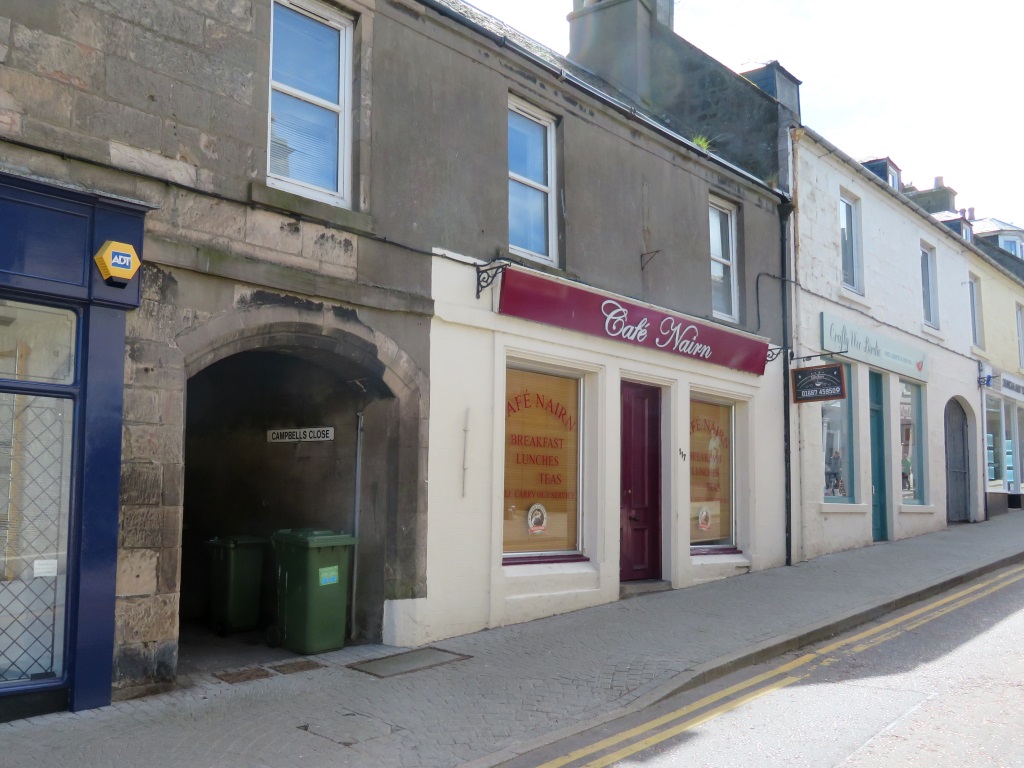 [1] They all flock to Forres for that.

Need something central and self-catering? Of all the options, of course you're going to book this. Not for the clean and well-appointed lodgings but more for the bare-faced cheek of the name.

All completely unnecessary, actually, that unseasonably freakish, high-pressure system is justifying the sunny reputation so you'll be dining out tonight, again, although that toaster will come in handy in the morning.

Just west of Fishertown is where Nairn flourished as a resort in the mid-1800s. As is now known, they steamed in by train and the Victorian fixtures and fittings soon followed. 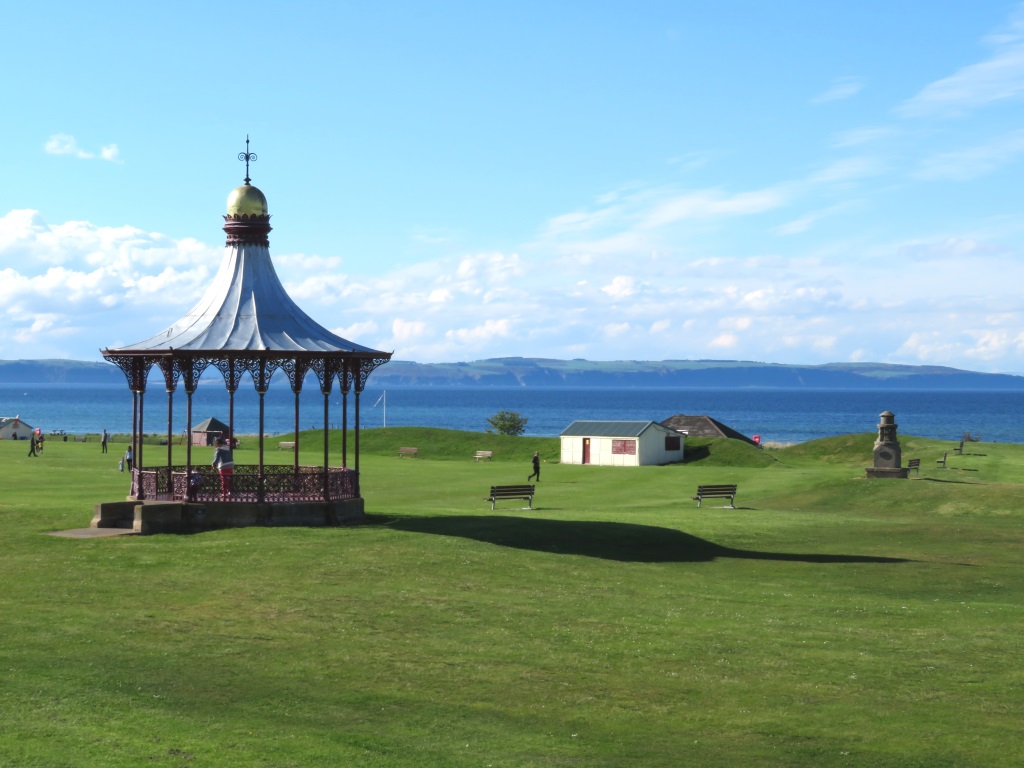 That included the grand lodgings behind the bandstand and the Newton Hotel was where Charlie Chaplin, no less, holidayed in later life, they say.

It will all look like this later, which is one of the upsides of looking west over water at sunset. One of the downsides, however, is golf or rather the type of people who come here to play golf. 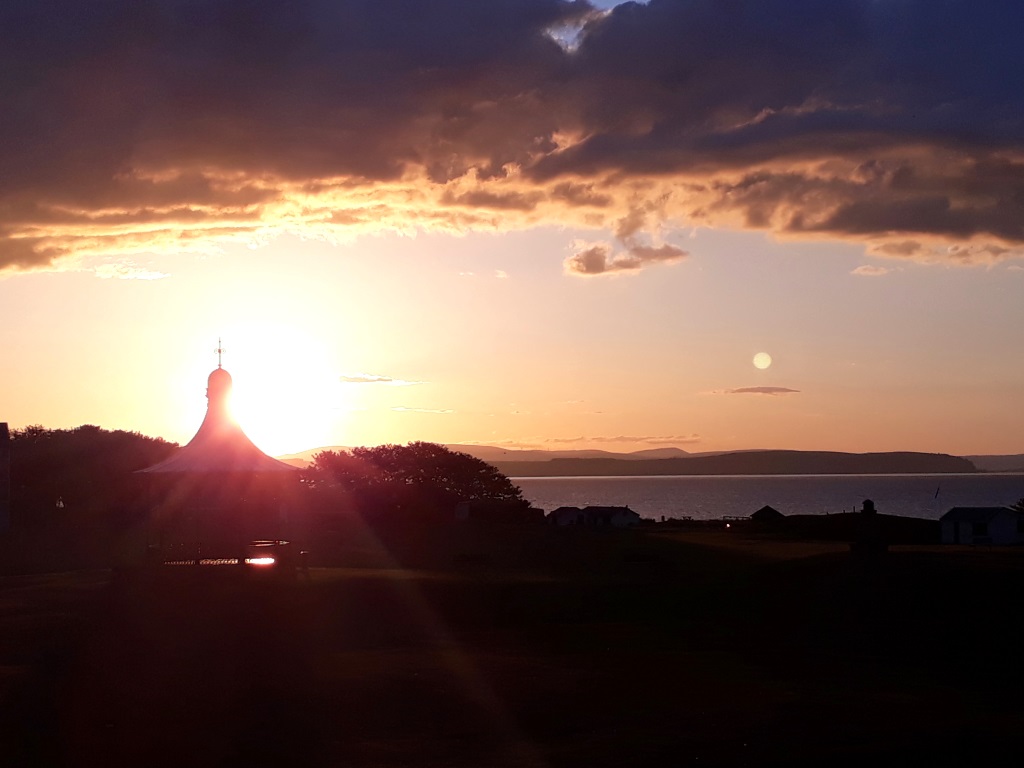 What do you mean? You already know that? You're staying at the Golf View Hotel & Spa? Having just done a quick check, that's coming in at £197 a night!

Little bit swanky innit?... Just who do you think you are?

Poshed-up pub grub, really, but still better than expected. Quite possibly the friendliest waitress, ever, who loved the new-found family connection but loves Cawdor even more, which is where she was married.

Asking about the accommodation, the name of the street is revealed... 'I know exactly where you are.' Not in a sinister way, mind, it's just a small town.

A large, ruddy-faced Lancastrian has plenty to say for himself on the next table. There's not nearly as much from his near-silent dining companion but it's good to hear that Brexit™ will 'sort itself out'.

It's clear they're not in the oil or offshore industry and there's a temptation to ask but he's off to the bar for a nip then an early night... 'We've a 700-mile drive to Blackpool tomorrow.'