The old, land-owning laird of Luss, Sir James Colquhoun, no less, kicked all of this off in the 1770s before going on to name it after his missus[1].

Right on the Firth of Clyde, he nicked the layout from Edinburgh's New Town with room at the top for the toffs although it's not too shabby at the bottom. 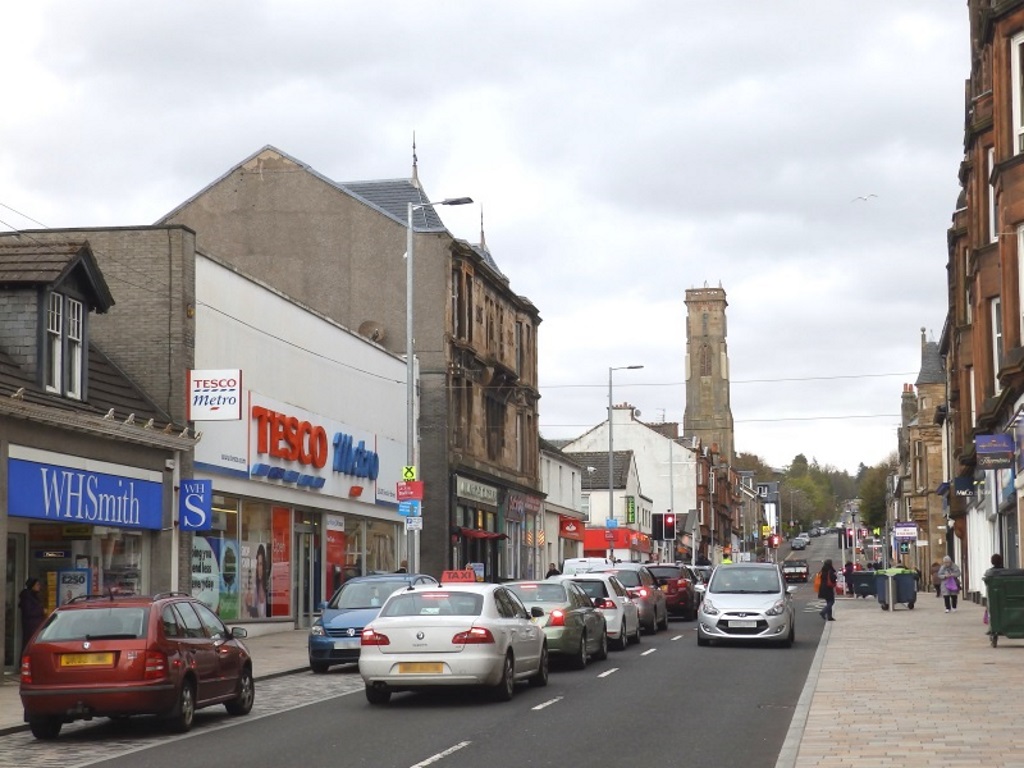 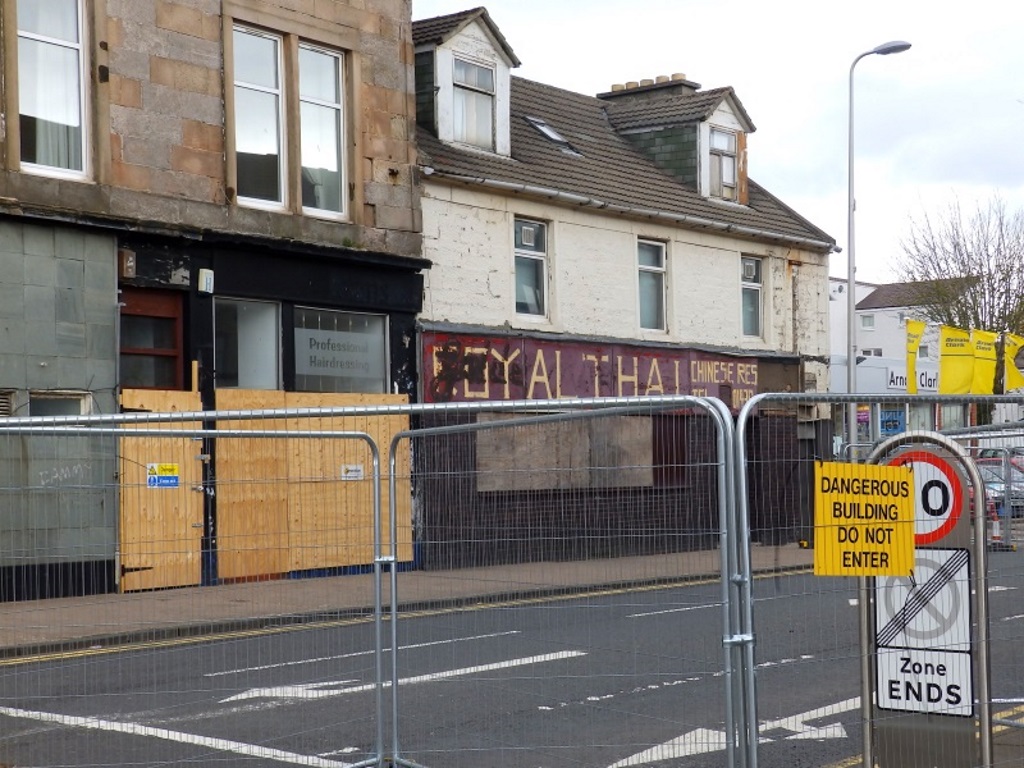 Oh! Hang on! This block is although it looks to be one of the last bits due for redevelopment. The improvements have been noticed over the years and there was even a Waitrose™ a mile or so east of town, now a Morrison™s following this part of Argyll & Bute just not buying into the brand.

Charles Rennie Mackintosh and his wife designed and decorated this National Trust™-run attraction that's in the posh part at the top and where highlights include a banquette and a tiny window. Bob was once forced to spend a shamefully wasted, sunny afternoon in May here and yes, it bucketed down the next day.

Argyll & Bute Council have been very busy, sprucing up-wise, although some of it is more required than recommended.

Tidal surges make West Clyde Street prone to flooding and the last Perfect Storm in 2014 required quite a clean up. The defences are still under discussion but a metre high wall has been suggested to keep this part dry. 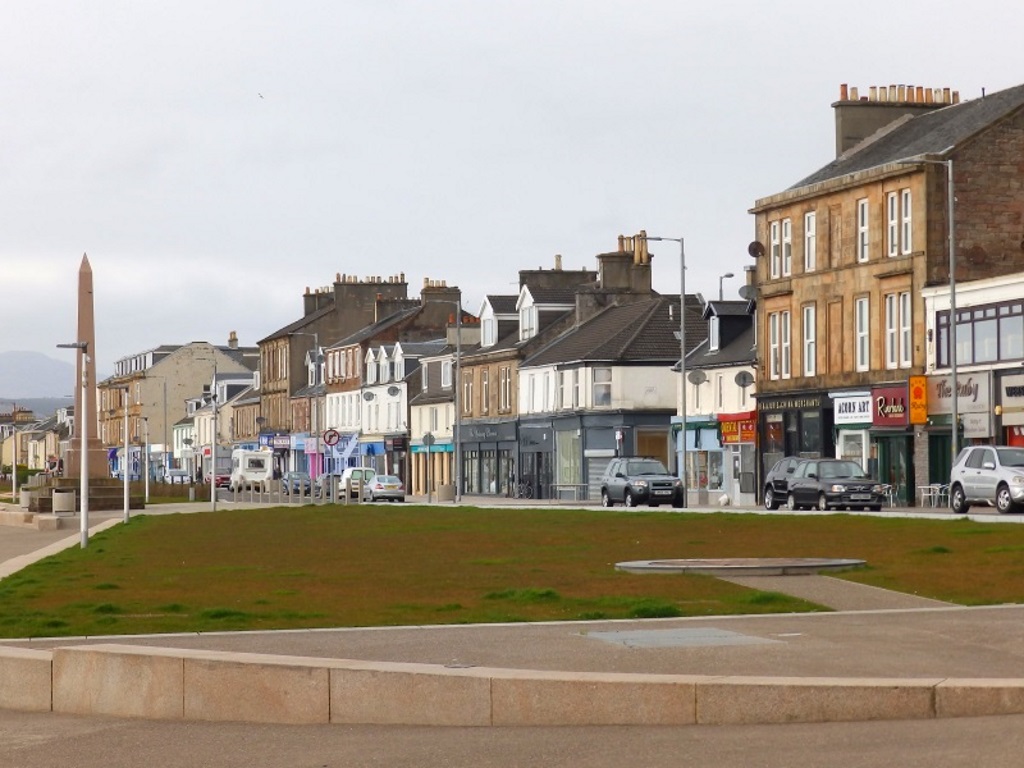 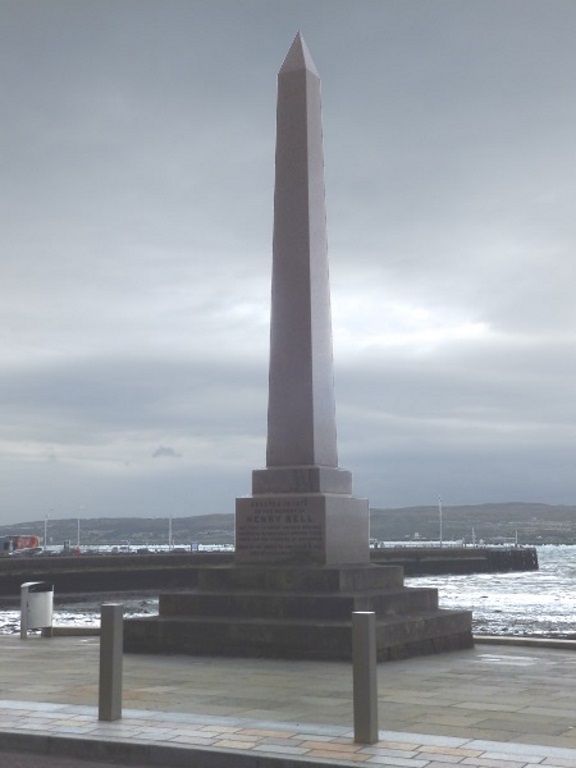 That big old obelisk? Why it's only a monument to Henry Bell. Henry Bell? No? SlyBob's never heard of him, neither.

At the time of writing, it feels that the world is a very different place. President Trumper has celebrated 100 days of office by not pressing that button just yet and PM Theresa May is attempting to negotiate a Brexit with all of the benefits of being in the EU but without having to pay for anything[1]. 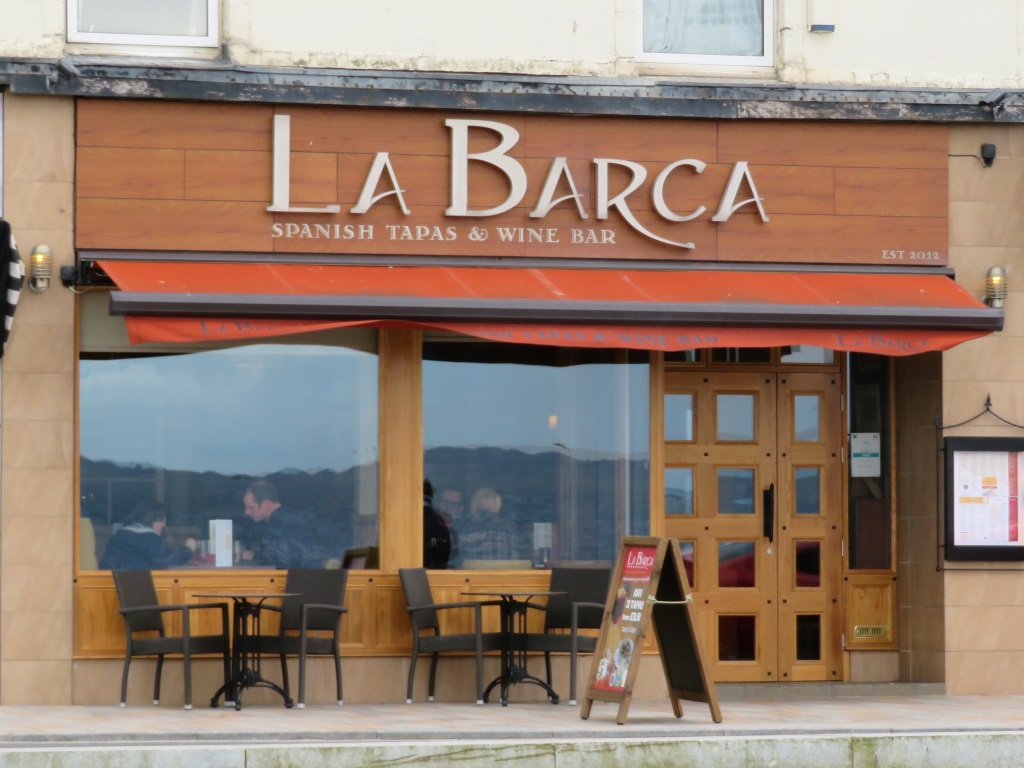 Stranger still, people are now sipping Rioja and eating tapas outside... in Clydeside! The world really has changed[2].

[1] Best of luck with that luv. If that sounds a bit inappropriate and condescending, well, she can be a bit can't she?
[2] This just in, Dr Who's now a LASSIE!

His Comet II wasn't so successful and sank just over the water off Gourock in 1825 with 62 passengers drowned. With this on his mind, he abandoned the pioneering, drifting like his steamship into oblivion. 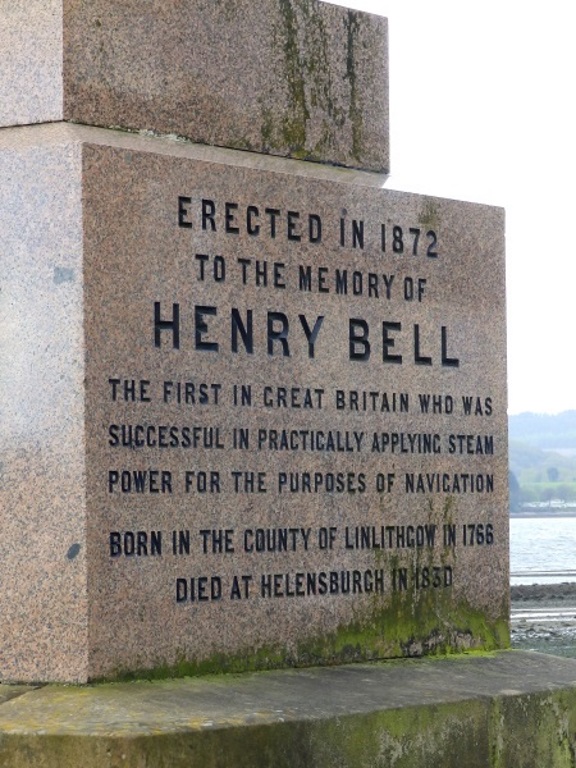 Having failed to patent any of his inventions, others simply nicked his ideas and the father of shipbuilding on the Clyde died here, penniless, in 1830.

Good coffee and cakes with outdoor seating in a now redeveloped and largely pedestrianised public square.

Wetherspoon™s have a tradition of naming their pubs with a local connection and they've gone with Henry Bell here. Seems they had little choice, the better known John Logie Baird was already taken and actually occupies a much nicer spot opposite in the old, Art Deco cinema. 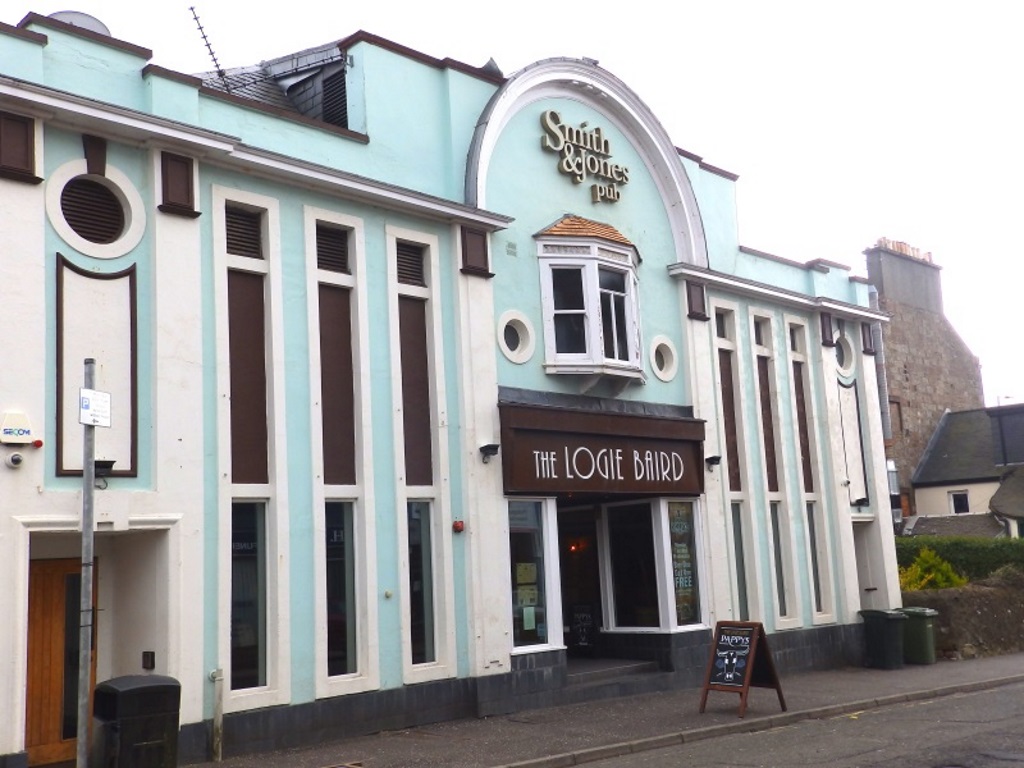 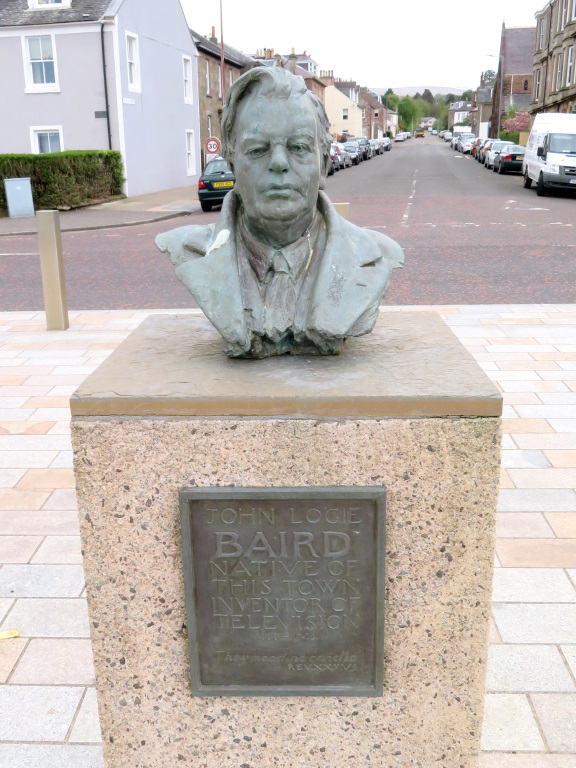 Although they're both buried here, this isn't Bell's birthplace but it is Baird's. Baird invented the television and is known worldwide, Bell, as is now known, died without a pot to hiss in.

There's a TV in the Logie Baird for your Sky™ Sports but not in the Henry Bell, which doesn't have a steamship, neither. The best they could do, as a nod, is a kettle in their kitchen, probably.

Indian restaurant serving that most traditional of all the curries, Mince and Tatties! 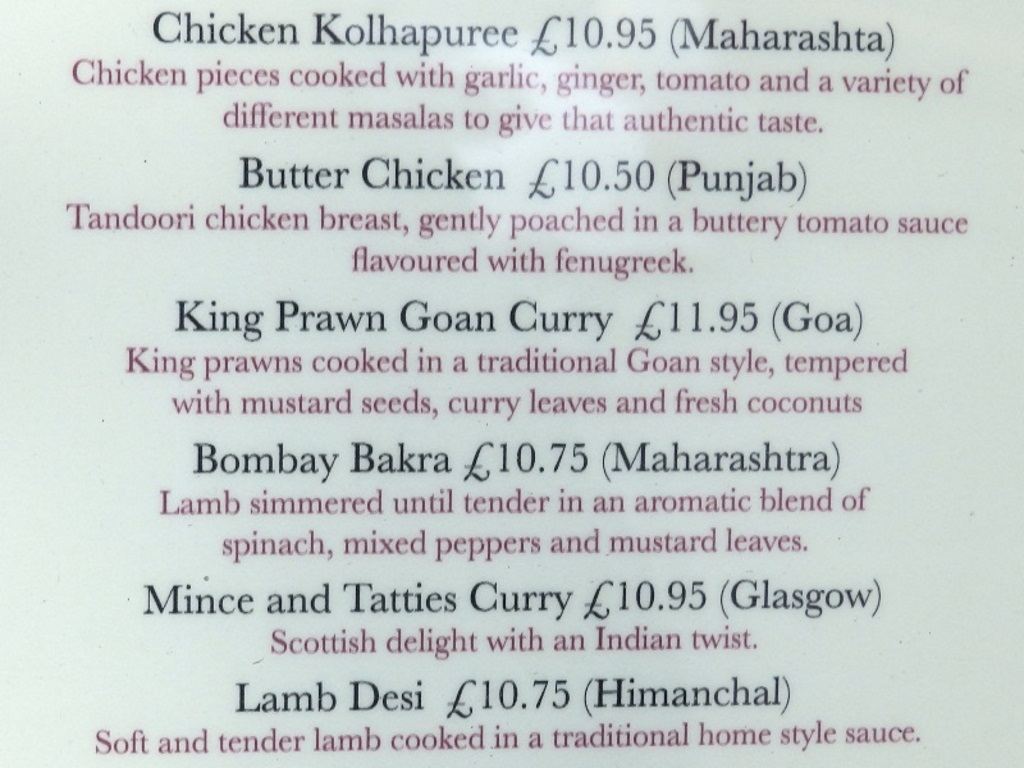 No kidding, it's just a shame there's no neeps in the naan bread.

Ferries no longer run from the quay but if you wait until the end of May, excursions on the PS Waverley paddle steamer are an option. Not an SS, of course, that would be a Single-screw Steamship, obviously, but if you can't wait until April, head to Loch Katrine where there's a smaller one that is. 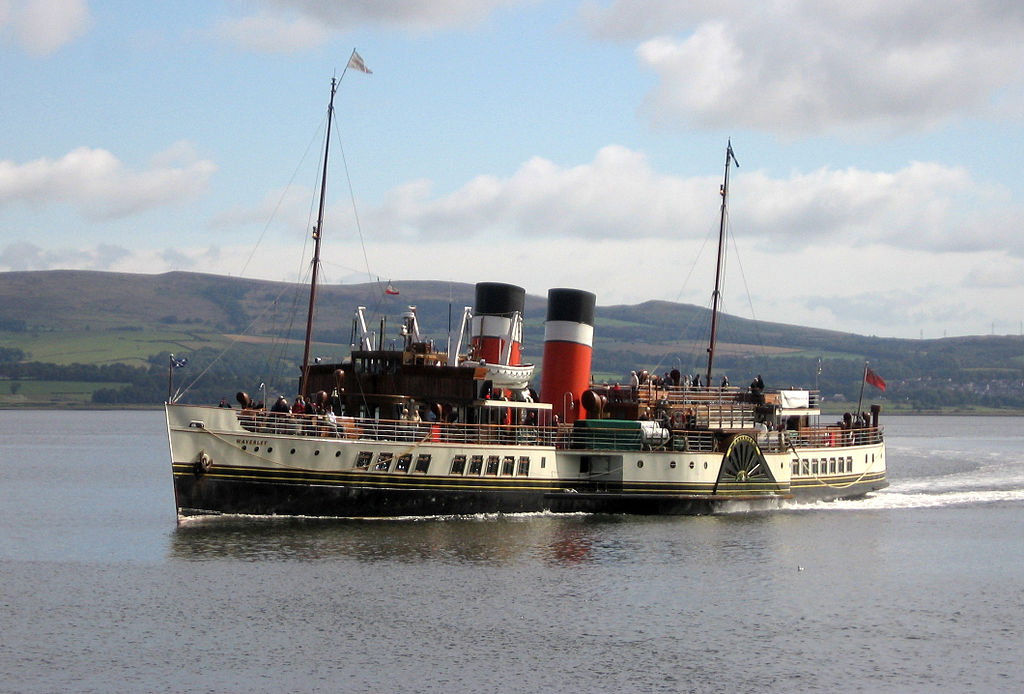 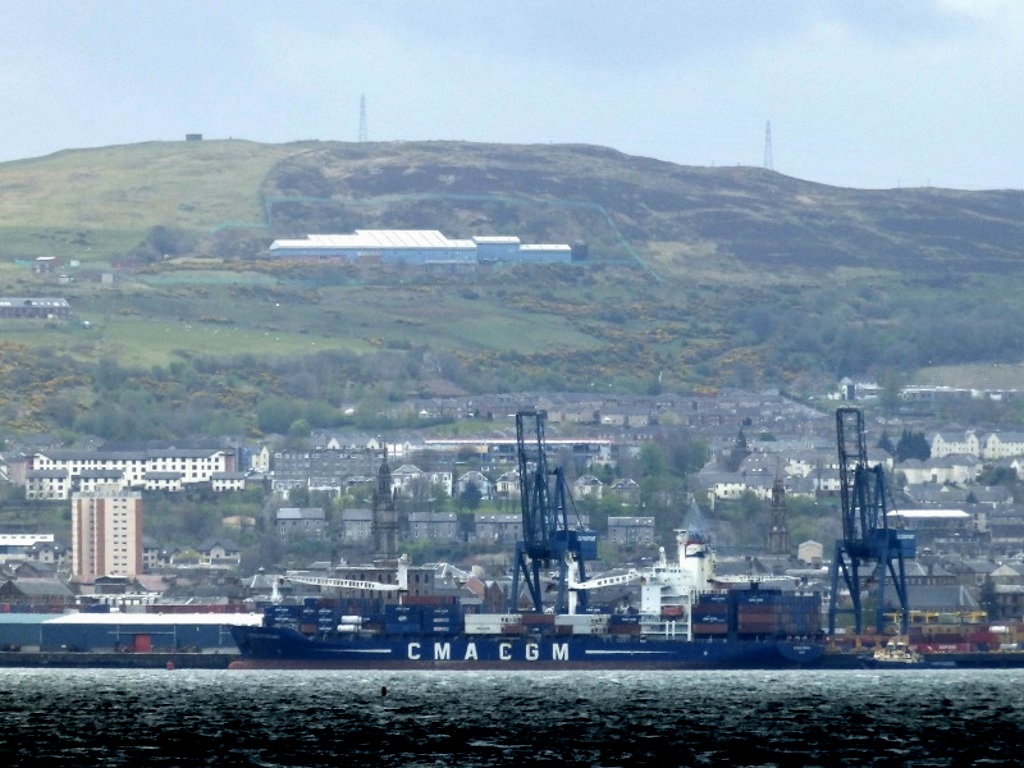 You're not missing too much ower the watter, Greenock is best described as post-industrial but you can get to Glasgow by one of, get this, one of Helensburghs's three train stations. Because of that fact and the shoreline location, this was found in 2006 to be the second most expensive town in Scotland, property-wise that is.

The final phase of major redevelopment looks to be the Pierhead or the bit that currently sticks out into the Clyde if you'd rather.

Proposals include improved parking and a replacement for the swimming pool although the current car park does a pretty good impression of one during unusually high tides. 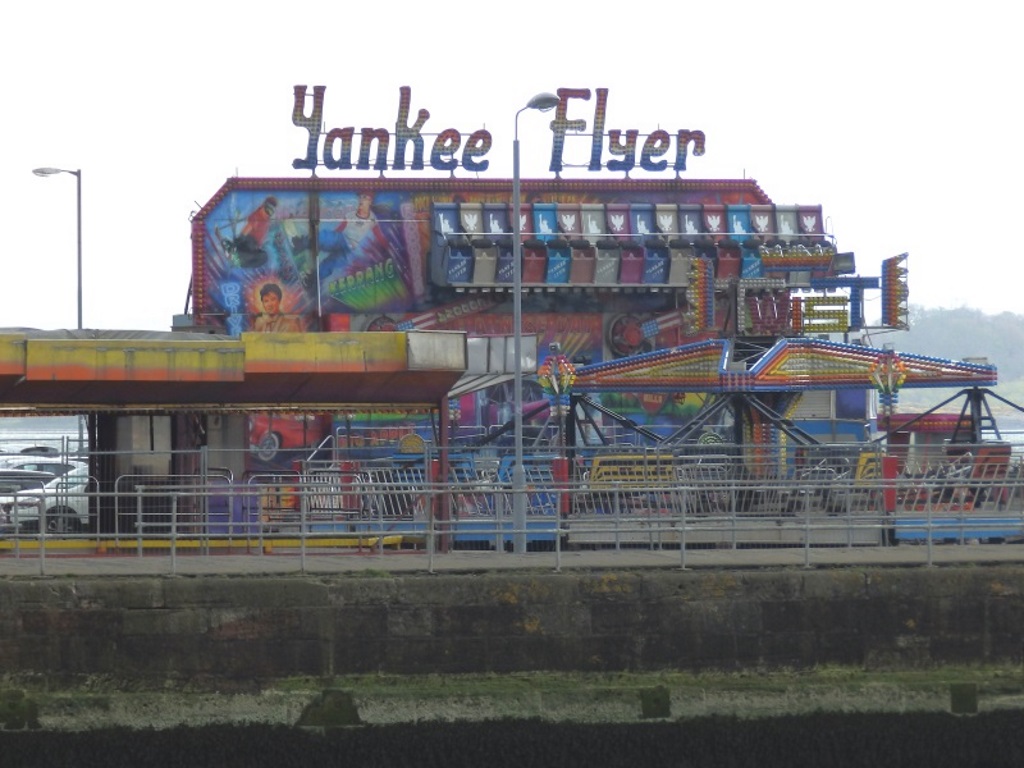 That'll be goodbye then to the small funfair, which when out of season, no amount of screaming will make the Yankee Flyer go any faster.

These plush, glass-panelled offices are the back of the new headquarters of Argyll & Bute Council. It's a shame they weren't here back in 2011 when this photo was taken, they presumably could have advised one unfortunate individual. 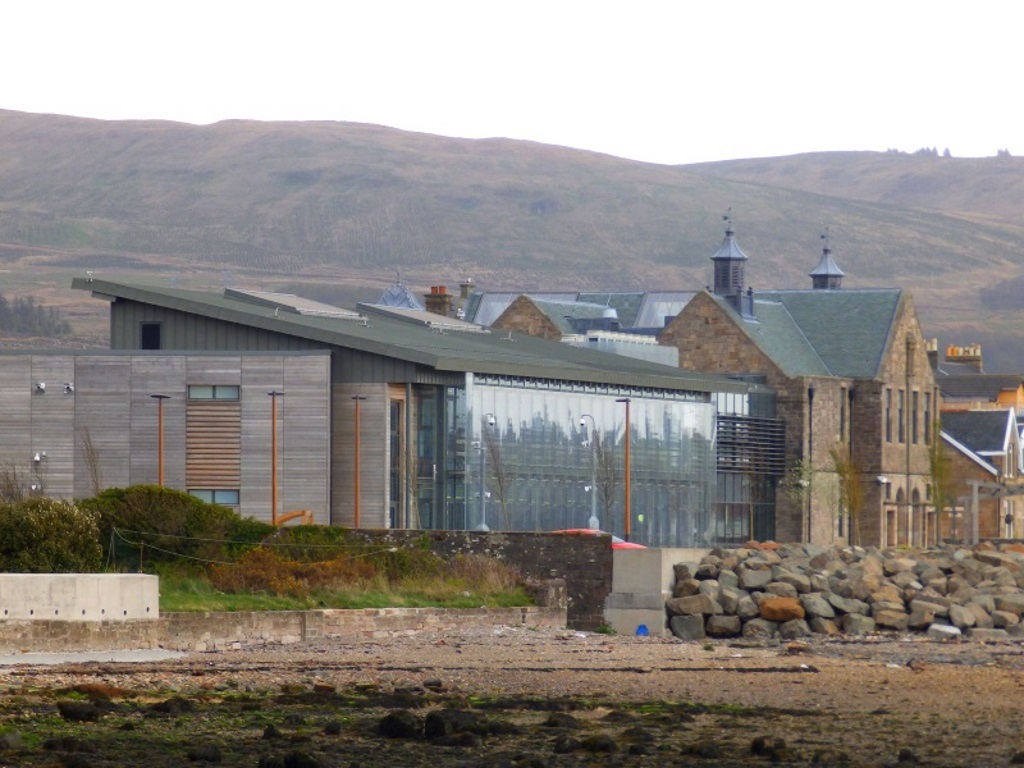 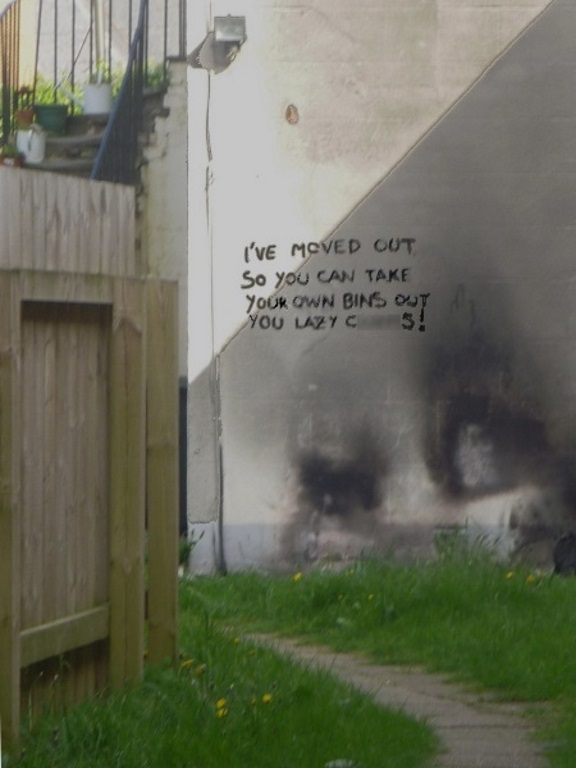 OK, the graffiti's been tweaked a bit but there looks to have been some kind of ongoing issue with the bins?