Land's End or even Ironbridge, say, say what you see! But where are these wide steps of which they, quite literally, speak? Seems they've since been built on and were carved into the cliffs to bring you up from the beach to St Mary's chapel. 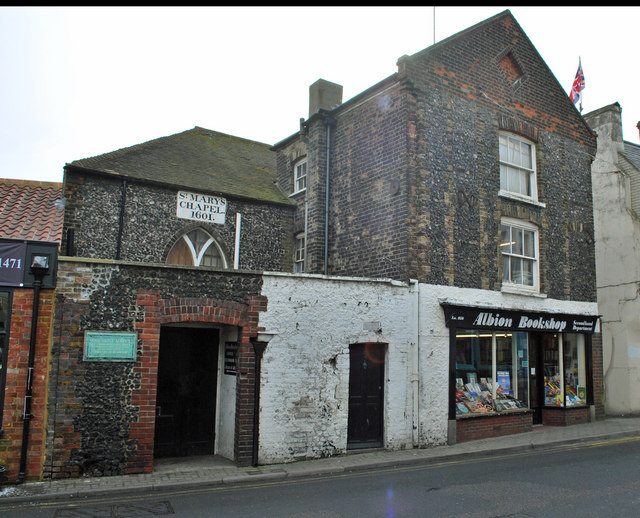 Some say some parts of it date from the 11th century although the signage reports a more recent renovation at just after four o'clock.

Not that there's any real sense of the seaside along Albion Street, mostly non-nautical knick-knacks and some fancy-looking fleshpots if Prezzo™ is your benchmark. 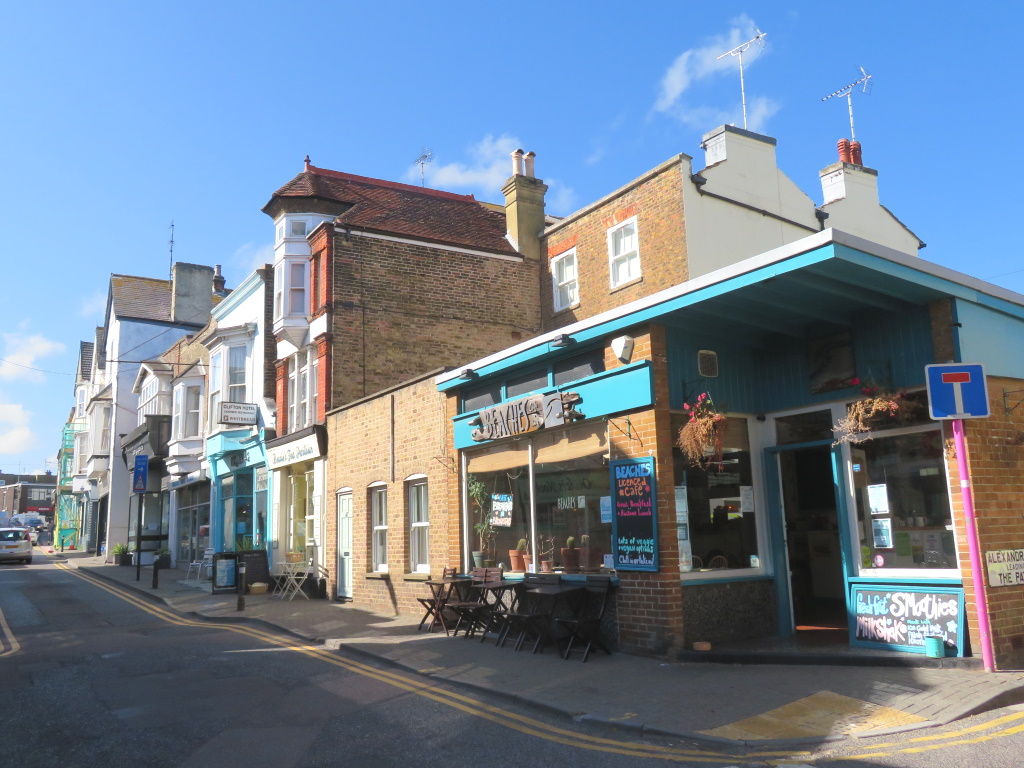 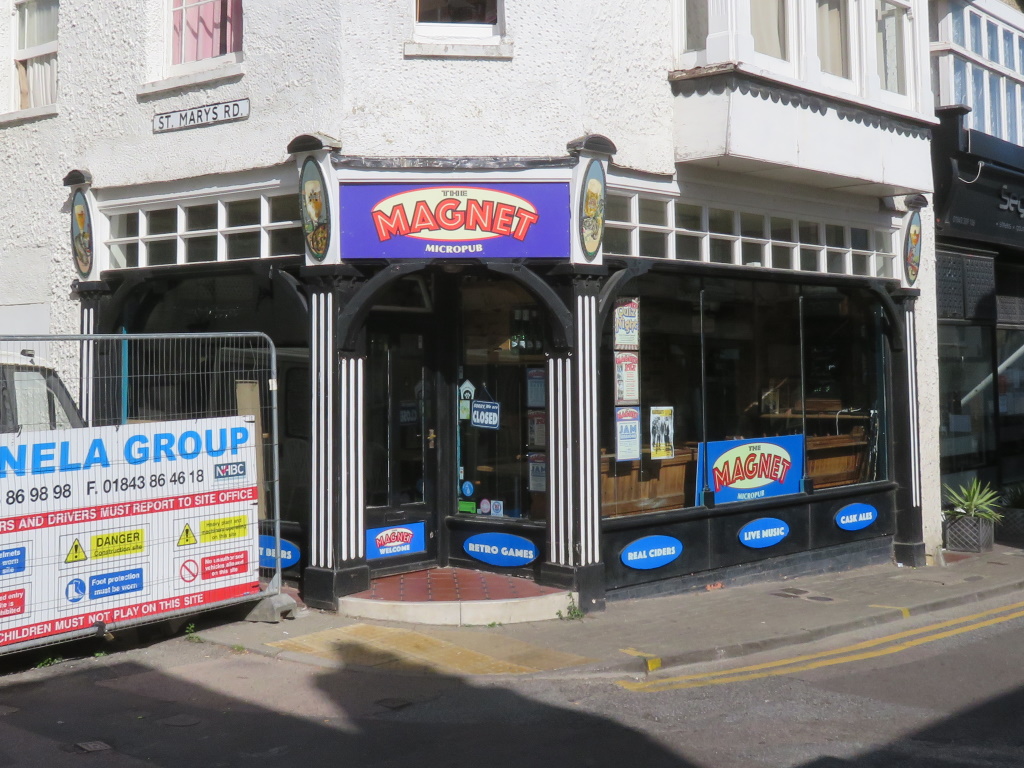 The fish and chips are nowhere to be seen and you'll have to head to Margate for that kiss-me-quick hat.

Or you could head down the slope of Harbour Street where it's reassuringly old-skool in an amusingly small-scale way. 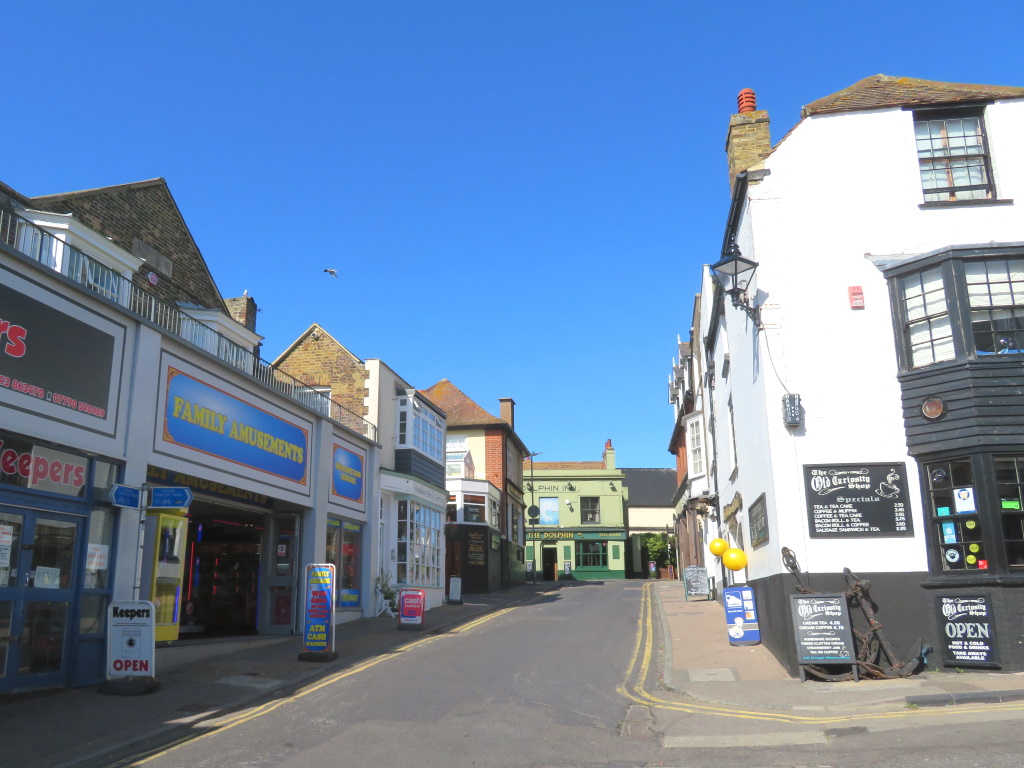 Additional candy for the eye is provided by the town's, Neo-Georgian cinema and an arch that's considerably older but not just any old arch. 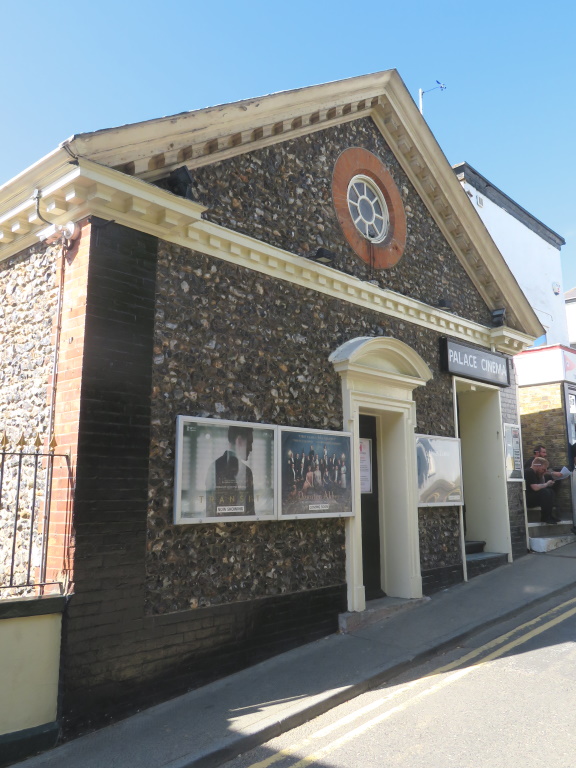 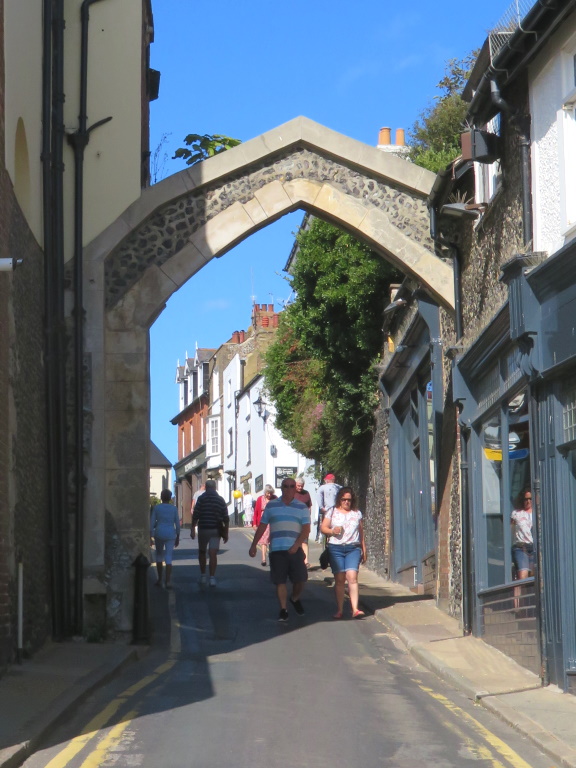 This is a flinted gate, some even call it a portal, and heavy doors would once have hung to provide protection from the French. The year 1540 it dates from so just over 20 minutes before they finished St Mary's, then?

It used to be just that but the knick-knacks have been ditched for a full-on tearoom. That kind of explains the name, which sort of sounds familiar, but even curiouser, there's a skeleton in a well, not real, the skeleton that is, the well, well is, to whom you can flip your change.

Alternatively, just leave it on the table for them bringing the bacon sarnies outside, thanks very much.

Harbour street leads, naturally, down to the beach so that'll be more of the, quite frankly, unsatisfactory shingle that stretches up from Deal?

Not the case, this one is more than serviceable, but more on that in a minute. If you head north past the ugly, yet necessary, concrete, there's a bigger and even better stretch up towards Stone Bay. 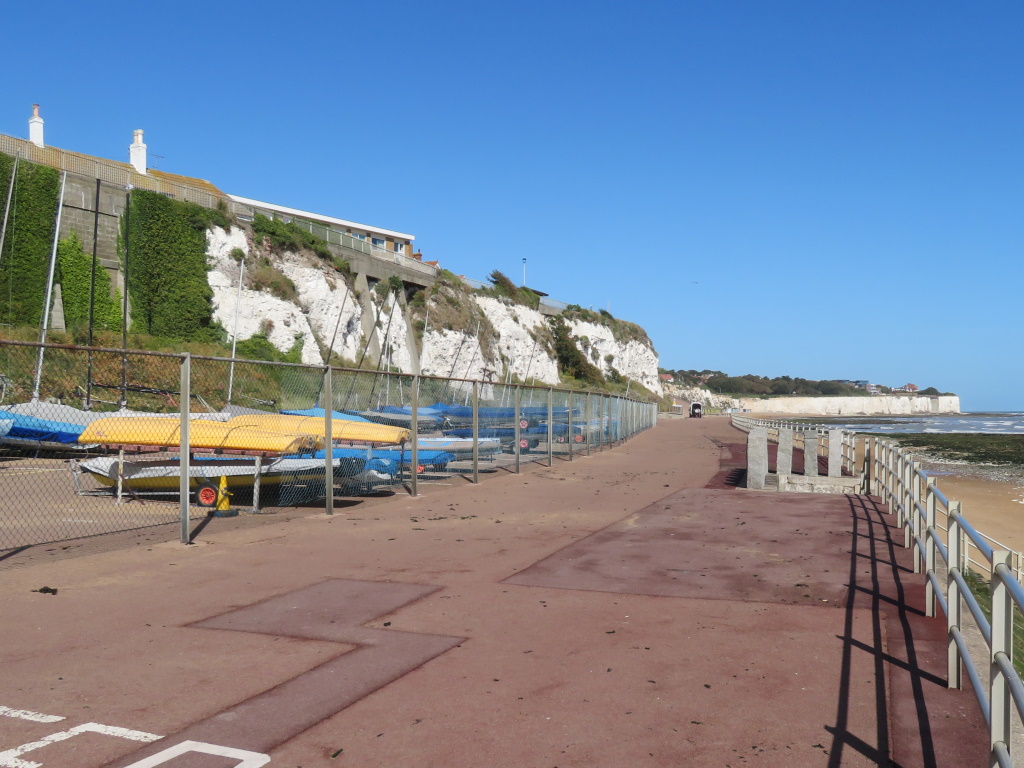 Head north even more from Stone Bay to arrive at Joss Bay. Hang on! Joss and Stone Bay?

Born and bred in Dover, it seems a little local knowledge of the Kent coastline provided Joscelyn Eve Stoker with her stage name, possibly, and does anybody else wonder what happened to the raspy soulstress?

The harbour wall provides a brief distraction before lugging it back up to the not-too-bleak-looking housing in the background. 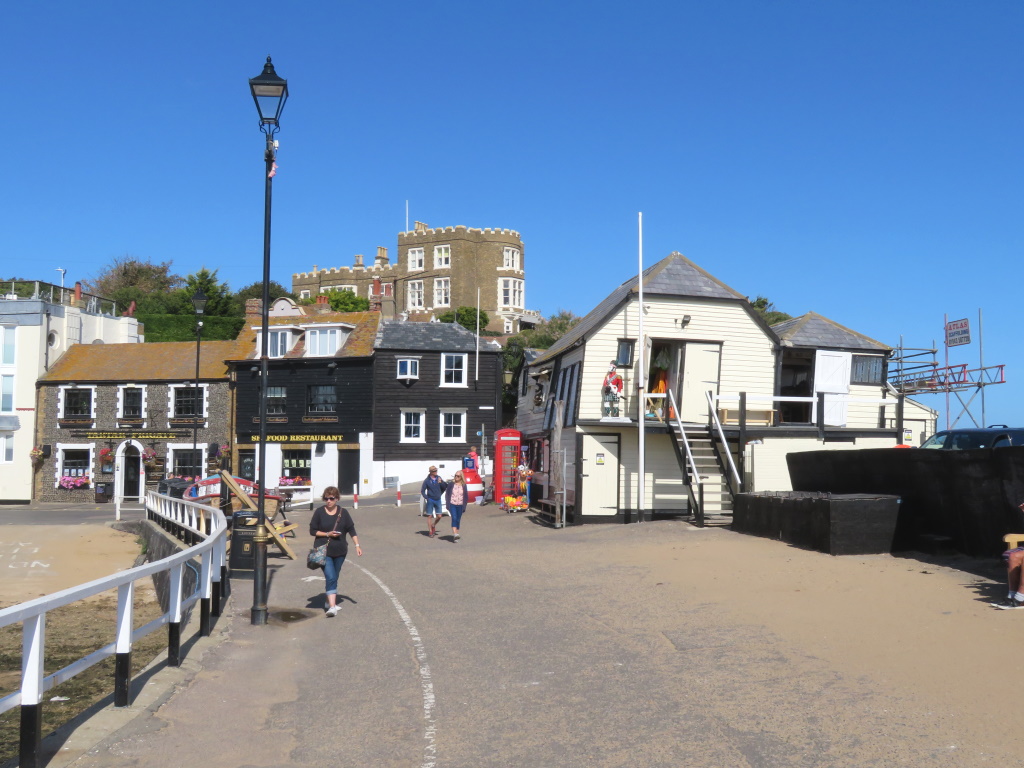 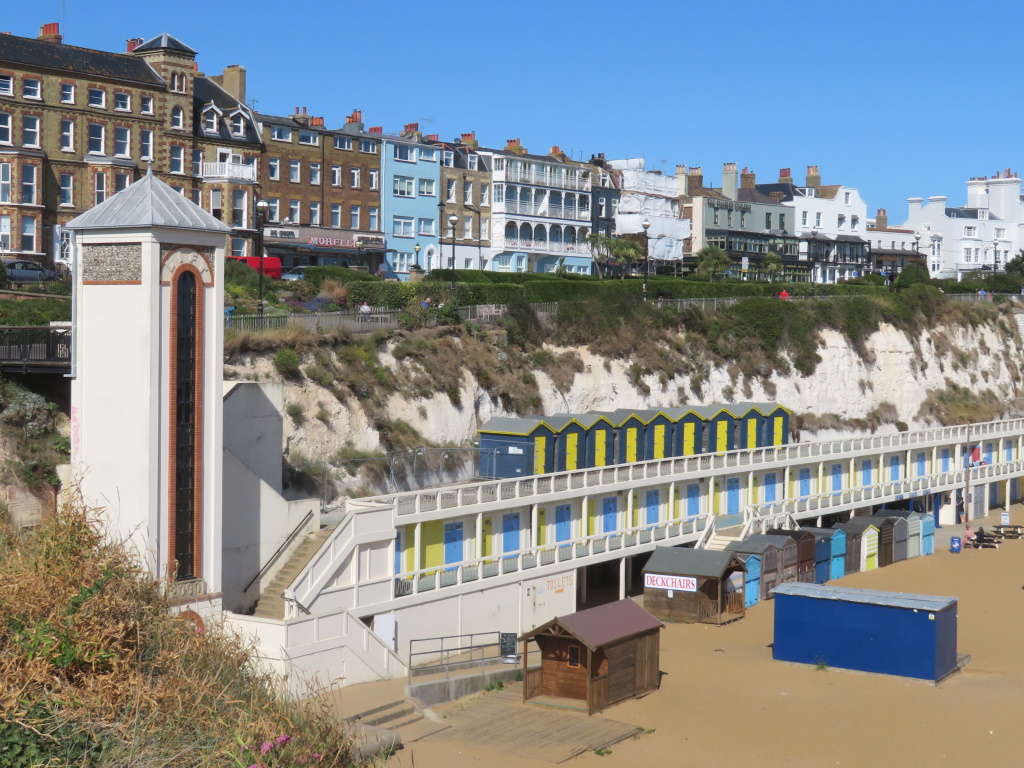 You could head across the sand to take the Art Deco lift up or the less-lazy steps to arrive, either way, at Victoria Gardens at the end of Victoria Parade.

The Victorians demanded the traditional fixtures and fittings and there's a mandatory bandstand, not shown. It's just behind Queen Vic's clock tower, erected in 1897 to celebrate some diamond work, jubilee-wise. 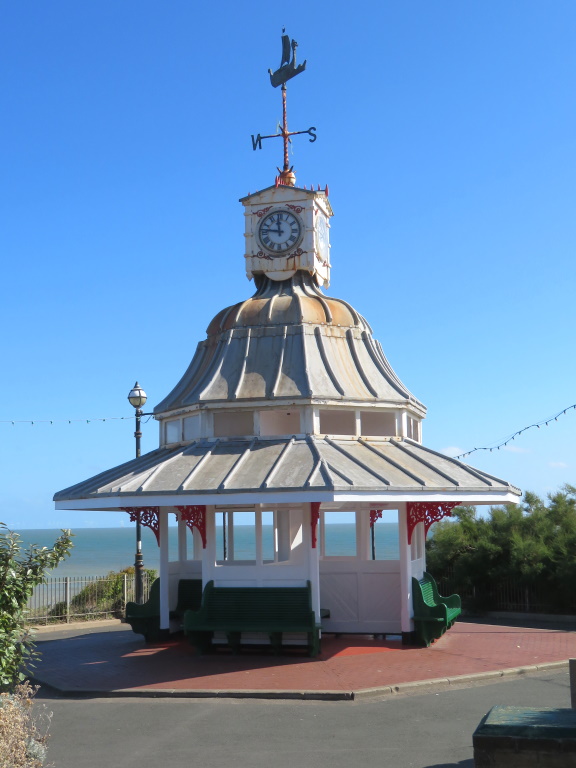 At least it would be if it was. The original burned down in the '70s and the 1977 replacement now celebrates Lizzie II for some simpler, silver work on the jubilee front.

The only reason you're in Victoria Gardens is because you've resisted the temptation of the Charles Dickens pub and Copperfields restaurant upstairs. 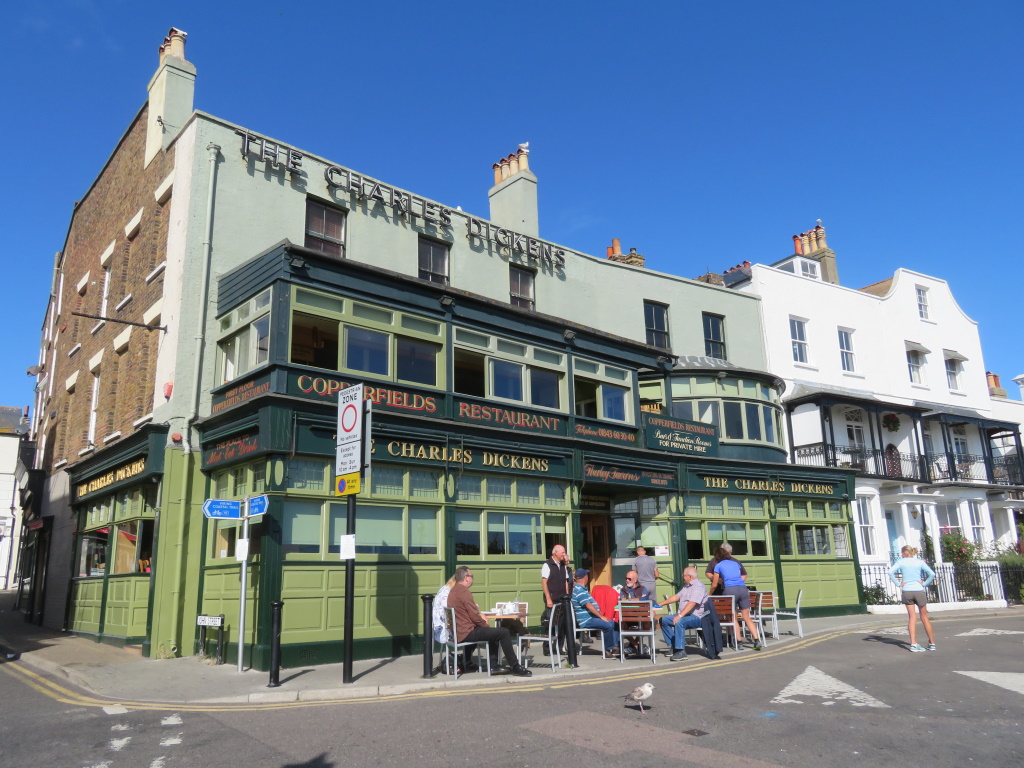 A couple of hints have been dropped already but Broadstairs was a favourite of the social-minded scribe and Dickens was a frequent visitor.

Amazingly, this isn't a Wetherspoon™s but it's what it would have been called if it was one, anyways, probably.

The aforementioned, not-so-Bleak-looking, House on the cliff was formerly Fort House and is where Dickens is said to have banged out David Copperfield one summer but the building wouldn't be rebranded for another 50 years. 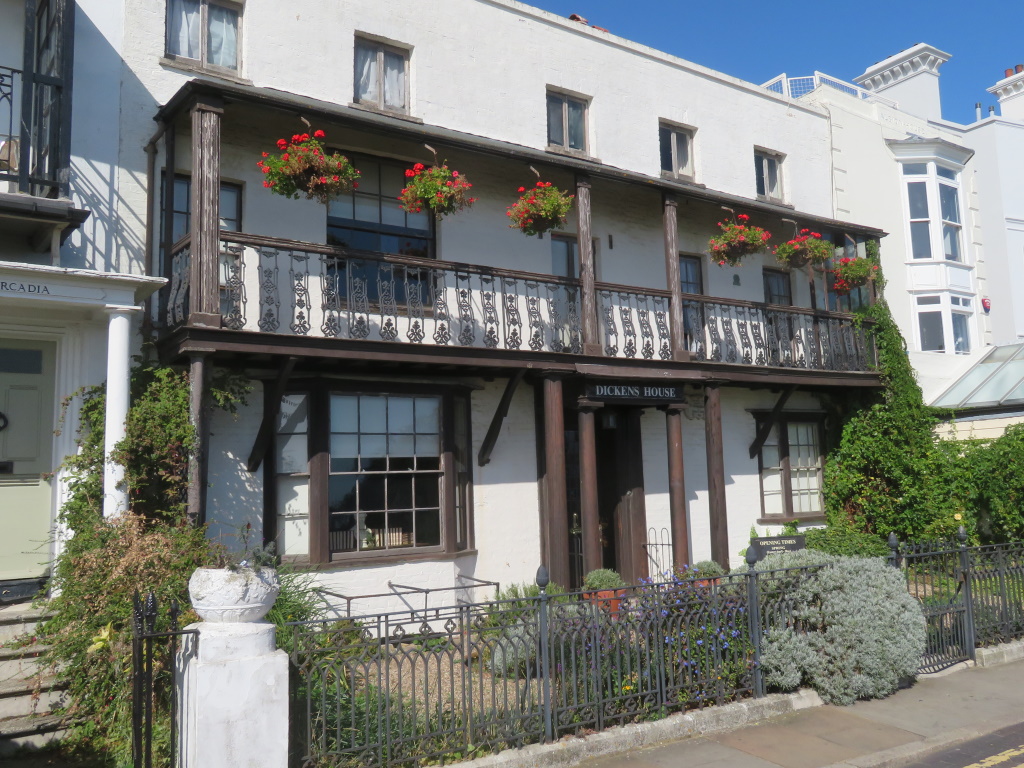 The Thirty-Nine Steps boozer is a clue to another of Broadstairs' literary connections and John Buchan also holidayed here right at the outbreak of World War I.

The 78 steps down to the beach are said to have been the inspiration but that's not nearly so snappy a title.

John Keats, Hans Christian Andersen, DH Lawrence and Oscar Wilde, no less, are also known to have stayed but all of their combined talent is outshone by former Broadstairs resident, Oliver Postgate. 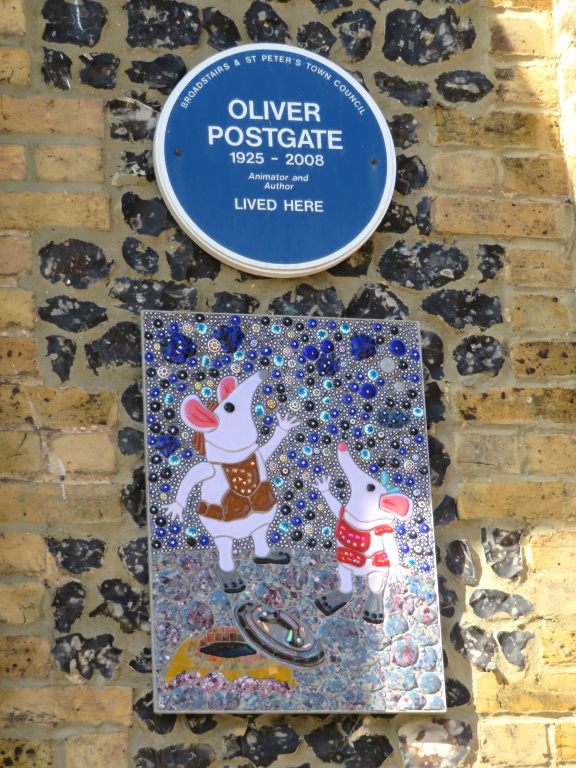 Meanwhile, back near the bandstand, this all overlooks a tidal pool, not that you'd know it unless the tide's oot, and a much better sense of the shape of the sandy bay with which you should already be familiar. 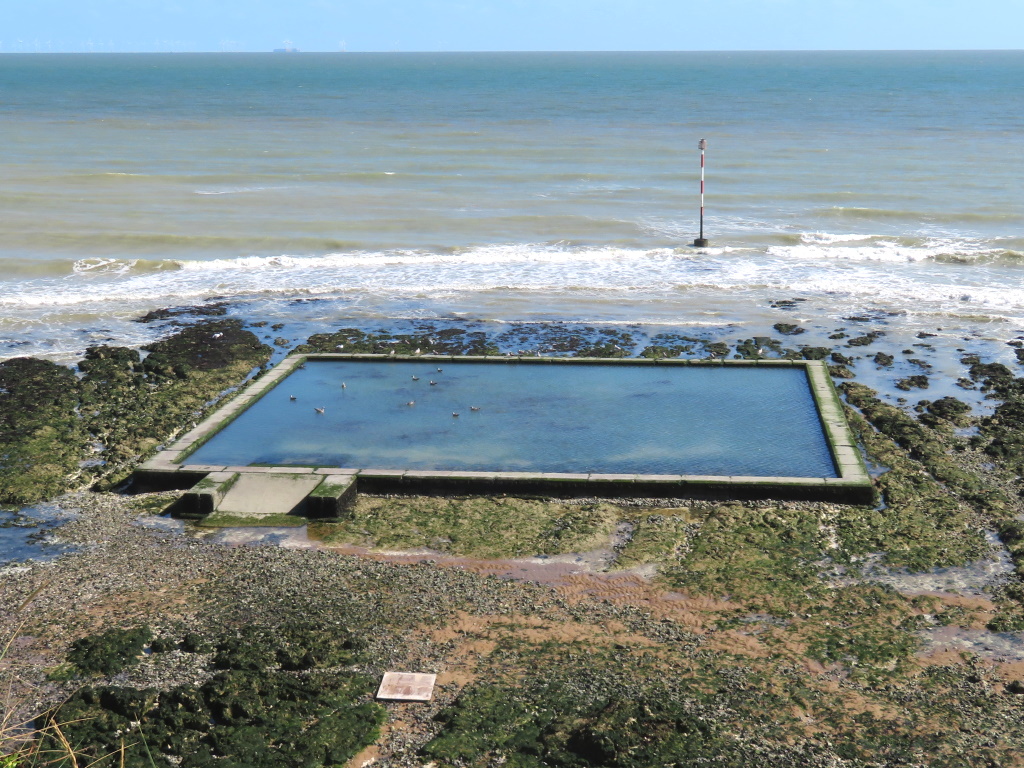 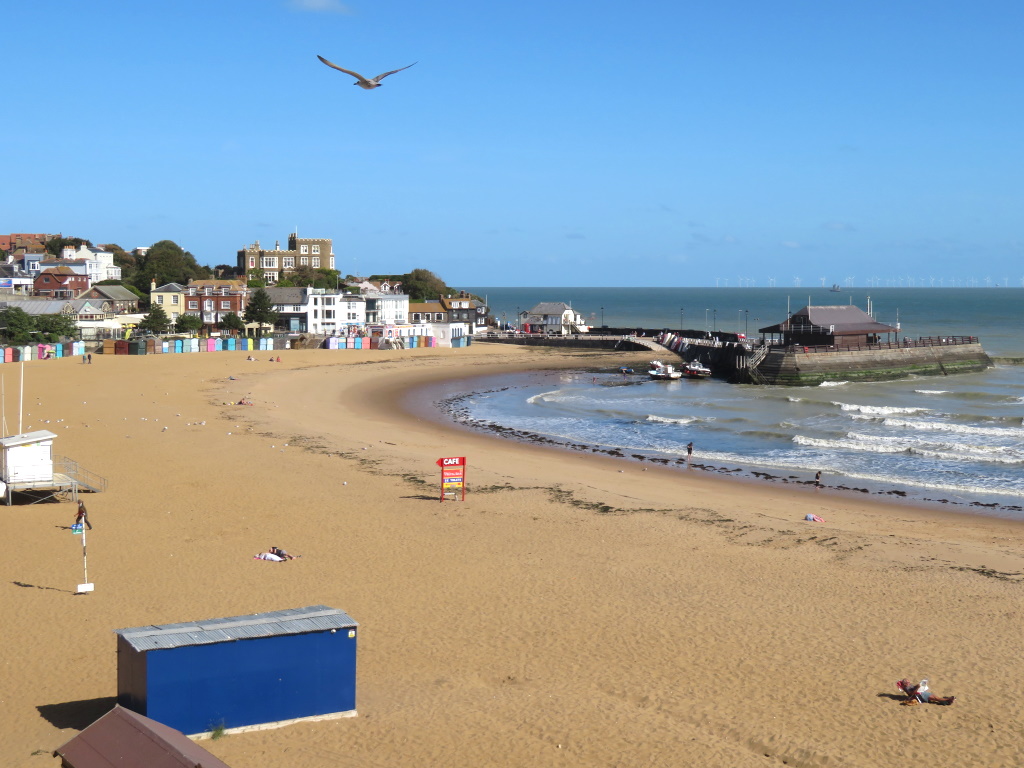 Remember them doors to keep the French out? Well, they would have been no good in 449 AD and not just because they hadn't been built yet. No, a Viking longship landed near here, some six miles south at Pegwell Bay.

The two main Danes were the brothers Hengist and Hortha although not that much light can be shone on them due to the Dark Ages. To 'celebrate' this event, if invasions are indeed to be celebrated, the trip was reenacted in a replica that can still be found down in Pegwell.

This in 1949, 1500 years after the original incursion and it's only since then that this has been called Viking Bay. Prior to that it was rather unimaginatively called Main Bay and just the other side of this jut is Louisa Bay.

If Joscelyn had opened that A-Z on a different page then that could have been a very different career for Louisa Viking.

Doesn't quite have the same ring, does it? Still, it's better than Louisa Dumpton?