The cable car to the top of Sugarloaf Mountain is actually in two hops and you start here at the station in Urca. 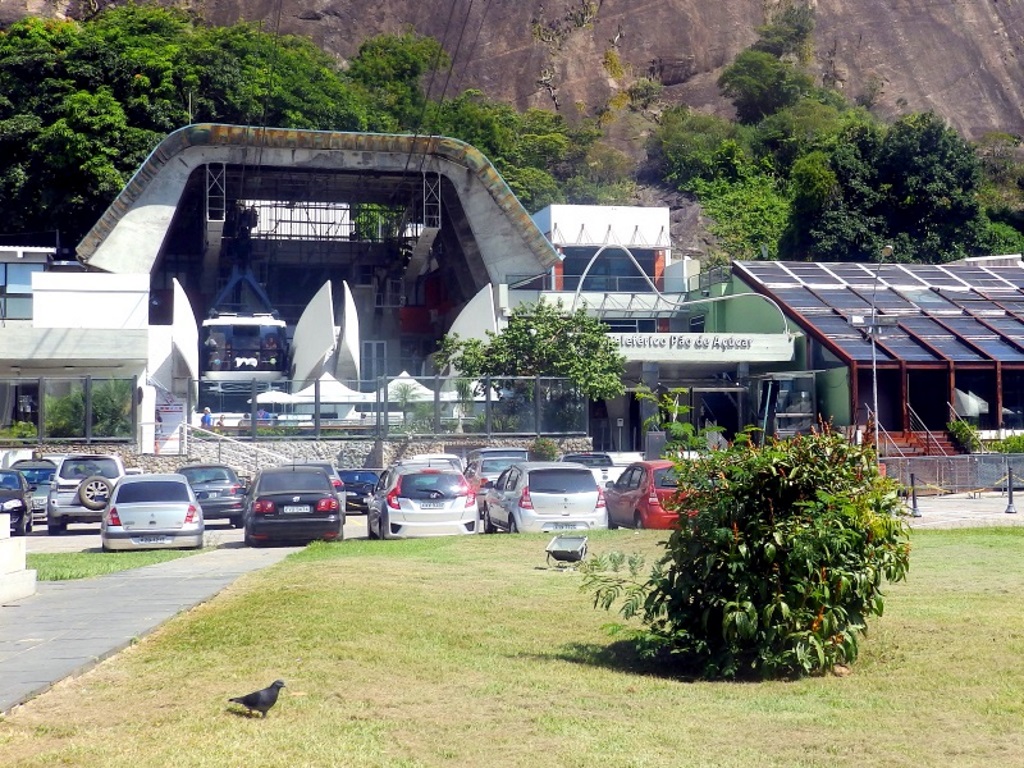 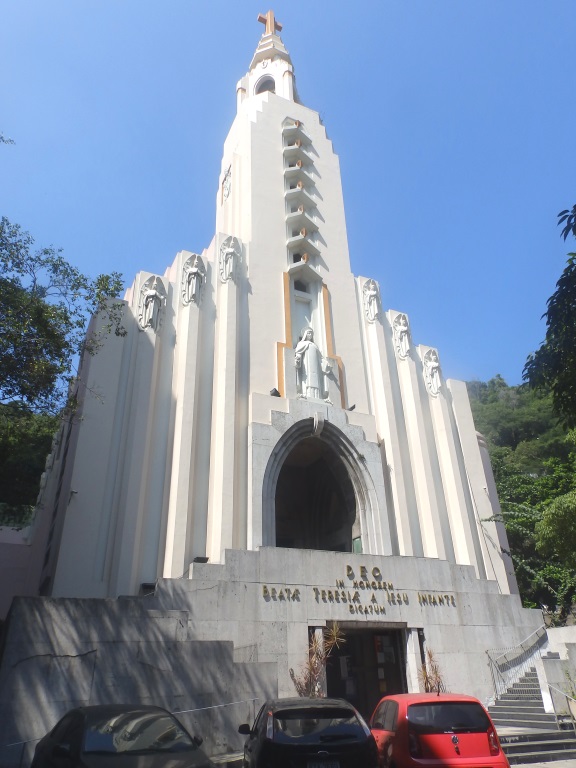 You can walk here through a tunnel, past a church then through a shopping mall but the Rough Guide™ to Brazil will have you murdered to death if you do. A parked up cop car back at the tunnel and a steady stream of locals suggest that's unlikely.

Alternatively, take a taxi, just don't ask for the Pão de Açúcar. You'll mispronounce it badly and the driver will just shrug and say 'What, Sugarloaf?'

You can hike the first leg from Praia Vermelha although the beach isn't really red. 88°F? 75% Humidity and no rain? Hmmm, that'll be two for the cable car then.

It's thought that skinflints have missed the chance to walk up the first leg for free, a 'clippie' now seems to nab you on your way in at the top.

There's not a great deal at the beach unless you fancy signing up for the Brazilian military but a nice view of your final destination. 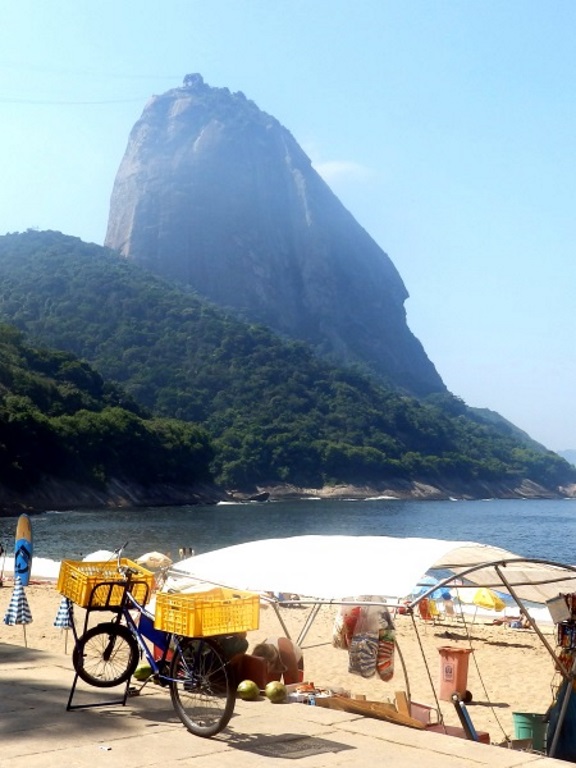 The name is from the similarity to the shape of old refined sugar cones or loafs. Dunno about that, looks like something else from here, some kind of helmet, perhaps?

That makes it sound not nearly so appealing.

If you came by cable, they'll kick you off at Morro da Urca, which is just over halfway up. If you hiked up the hill here then there's no idea why you're reading this tepid nonsense but well done nonetheless.

While you're here, you might as well enjoy the views down to Urca or Flamengo or Botafogo, probably, and let's face it, names of Rio's barrios are just being listed here. 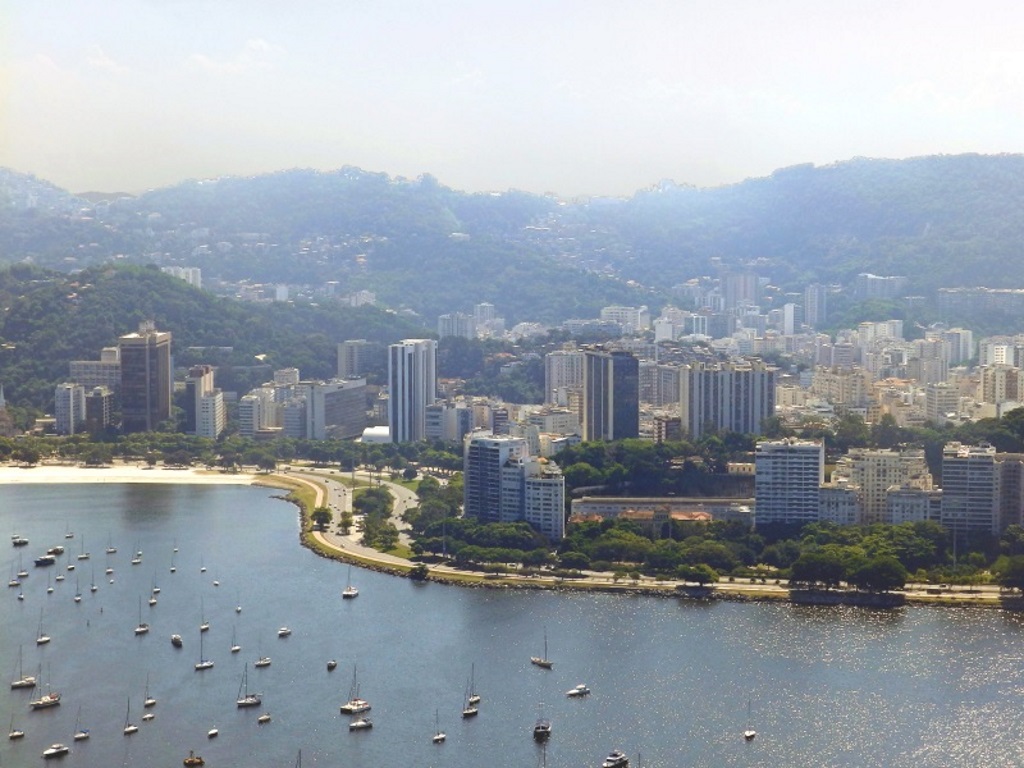 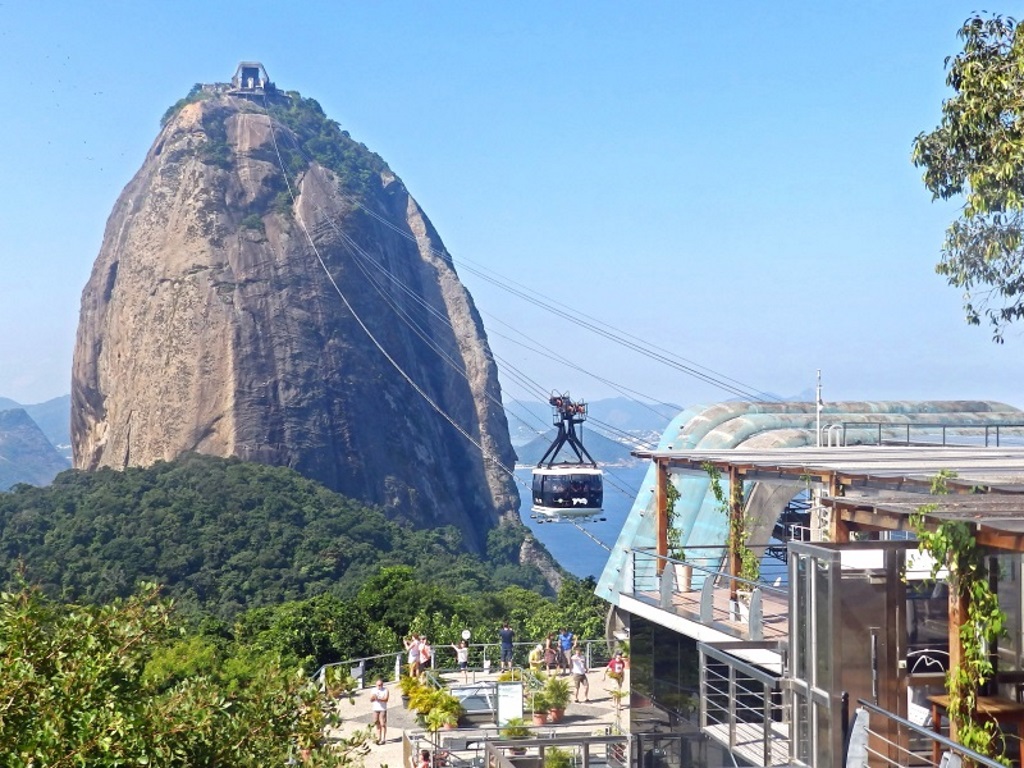 The wobblies might well kick in as you clock the climb up and across to Sugarloaf. Just remind yourself that at 1299ft, it's only slightly higher than Conic Hill near Loch Lomond and you've been up there loads.

To calm your nerves, relax with a glass of tinto and an interminable wait for a mediocre toastie at the larger of the two cafés but there's no way that you're not going up there now?

Once you've white-knuckled it up to Sugarloaf and you're not shrouded in cloud, the views are unsurprisingly even better. 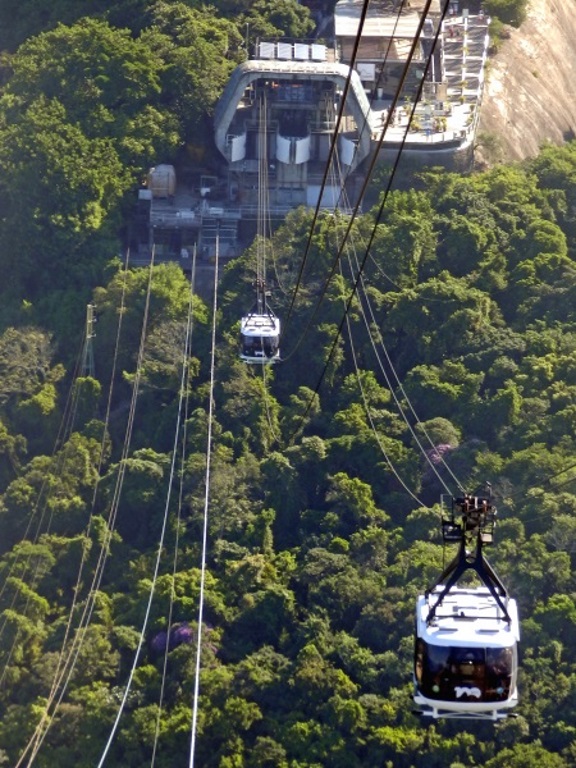 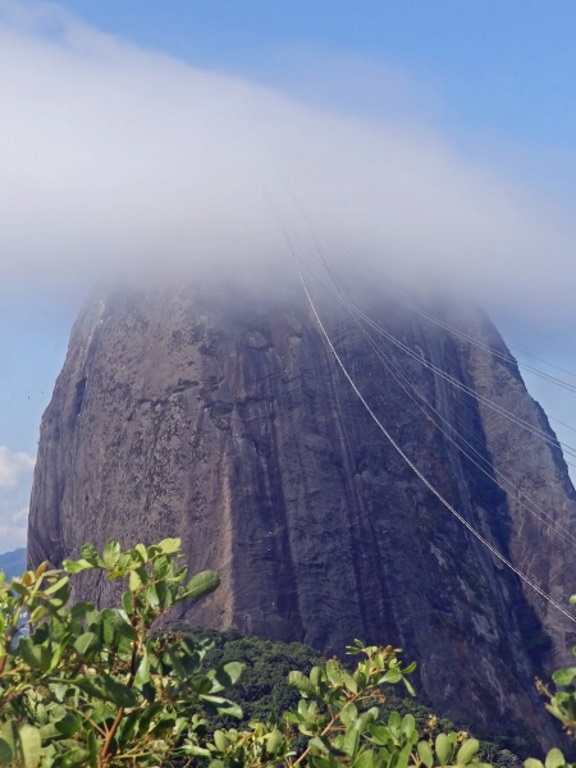 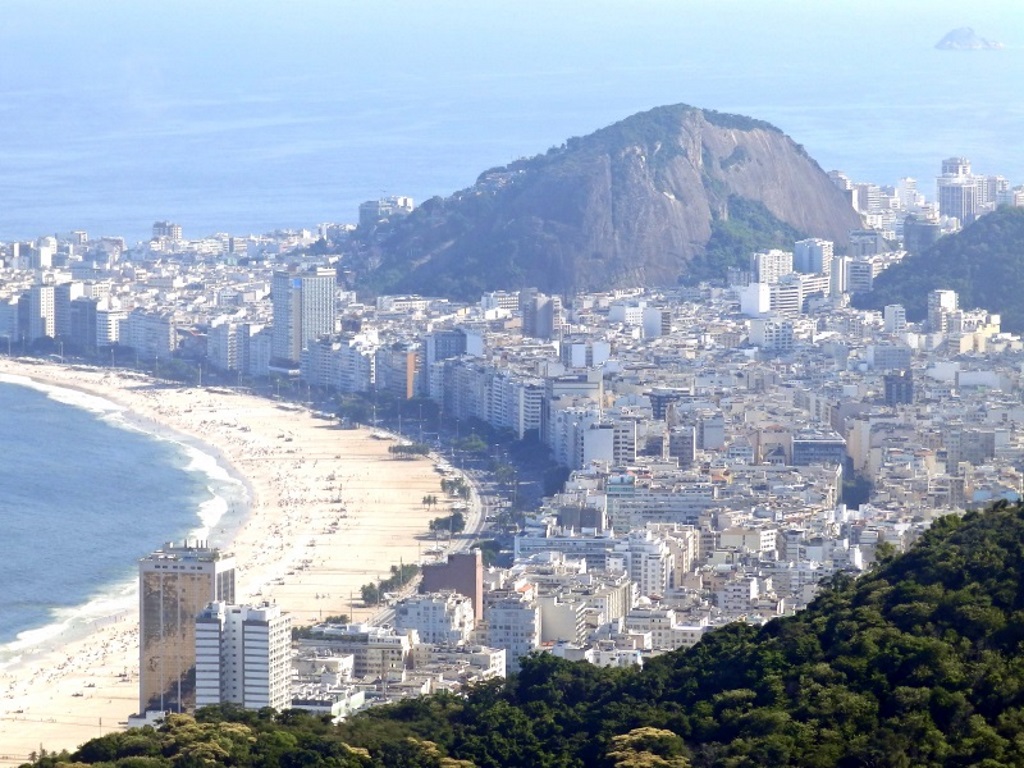 This one's down to Copacabana with Ipanema hiding behind the hump.

There are two airports in Rio and Santos Dumont mainly handles domestic flights to São Paulo. 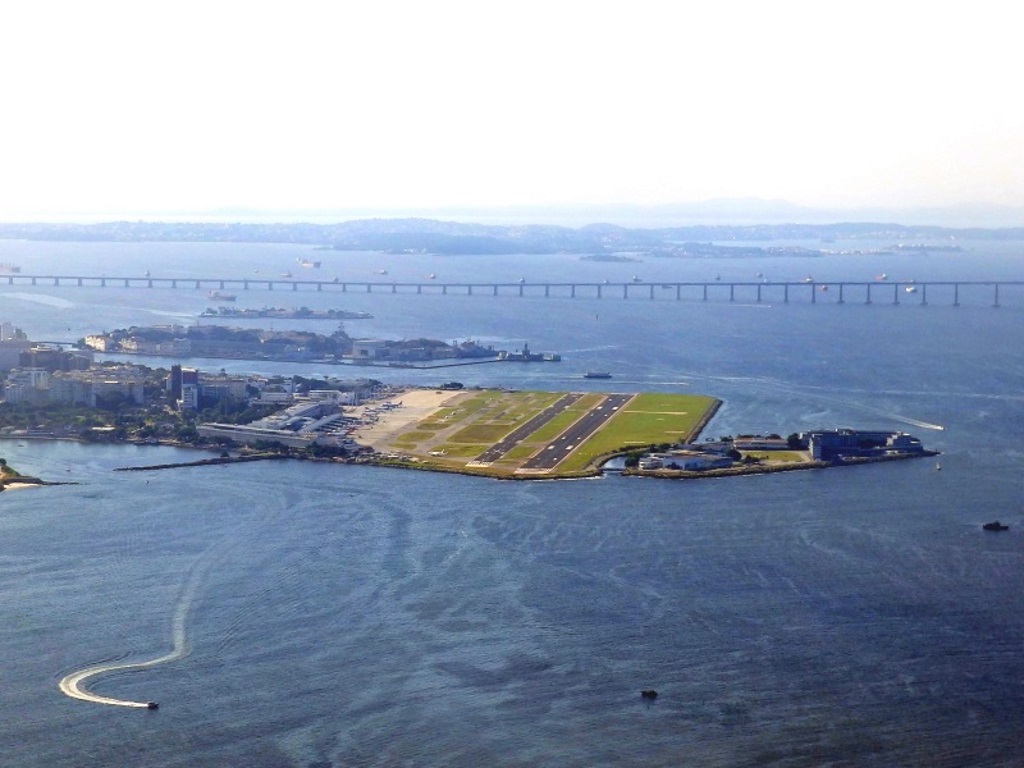 Planes take off from a runway that's not nearly long enough then veer sharply left to avoid clipping the cable cars. The Rough Guide™ doesn't mention the dangers of that.

Back in the 20th century, Bob inherited a nephew and he came here for the 2014 World Cup of Soccer. England may have failed to get out of the group but, after asking a girl for directions one night, he came back home with his own Jules Rimet[1].

That's the reason for this trip to the Southern Hemisphere, they're getting married, you see. Lovely Nathalia's from Niterói, which is over the bay and is where that eight-mile-long bridge takes you.

She says that residents of Rio say the best thing about Niterói is the view back to Rio. The poor lass is soon to be living in  Gateshead so not much change there then.

Look west and is that? Yes, it's thought that it is, at last, that, admittedly overexposed, statue. Despite four nights but just two full days here, it's still not really known where it is. 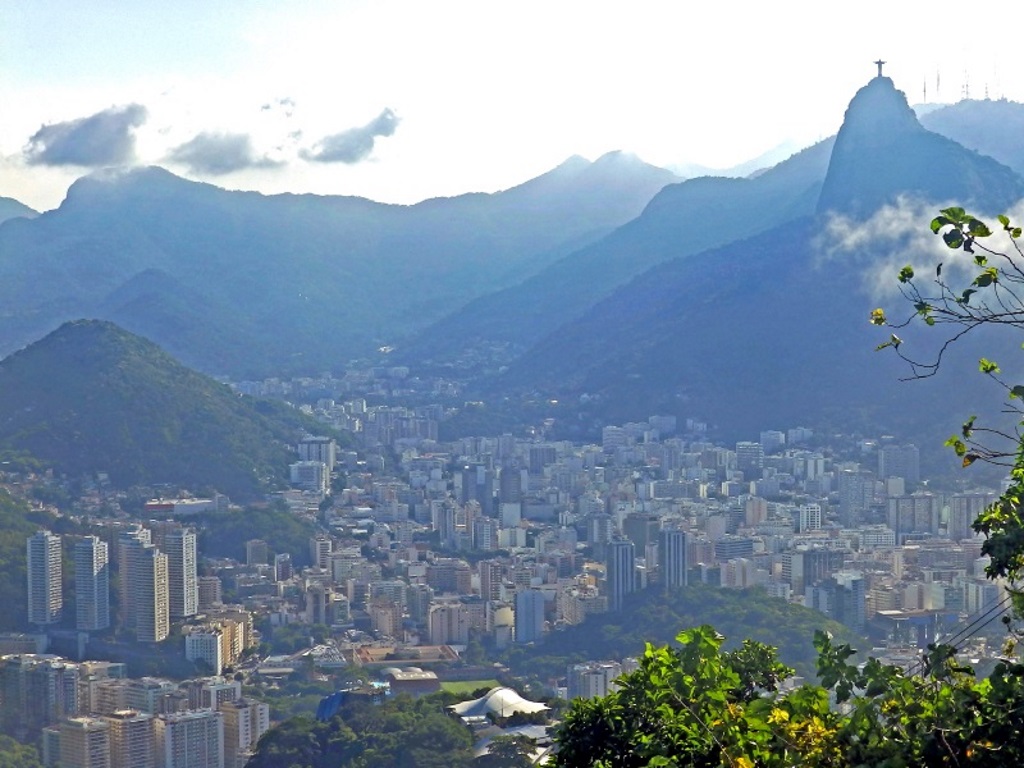 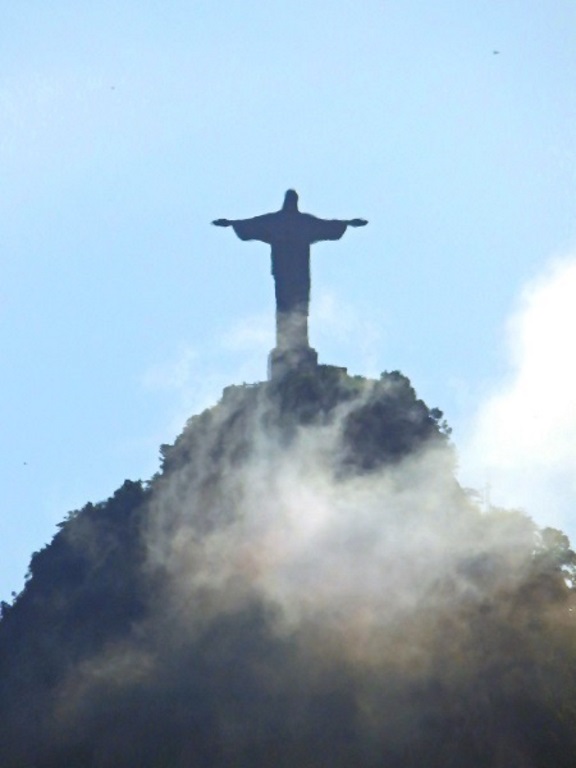 You'll need to figure out how to buy tickets in advance although some hawker down in Urca will promise to get you there and back in two hours. That sounded optimistic and the closest SlyBob got to it was this blurry zoom.

Now, it's known that 'selfies' are a thing but just when did they become a thing? Up here, you'll need to jostle for position with the preeners and with all them sticks being waved about, it was like South America were playing Japan...