This is just about as far north in North Yorkshire as you can go before the comparative dullness of County Durham kicks in. 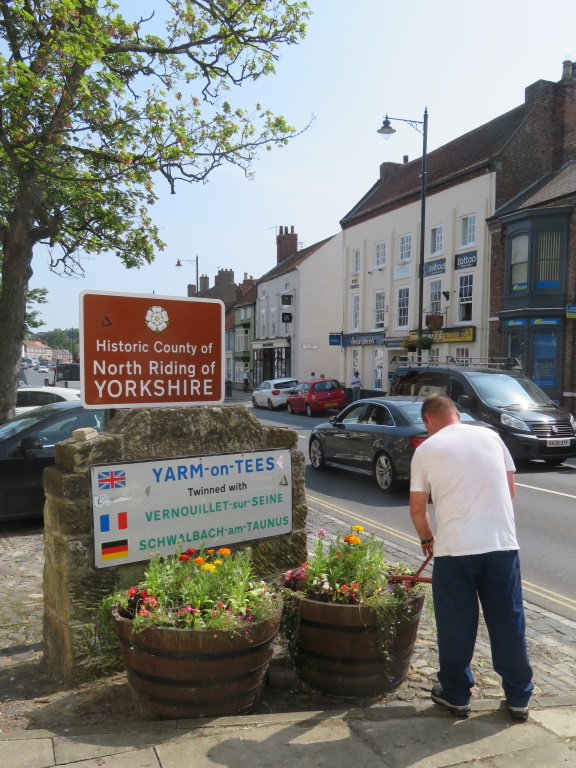 Controversial, perhaps, but the Borough of Stockton-on-Tees is the only unitary authority to straddle two ceremonial counties, you see, and that kind of fact is right up SlyBob's street.

There are two sides of an ultra-wide one to wander as well as a watery diversion but it's all being ruined by some booming bass in the background, at least it would have been until 2010.

A medium-sized Sainsbury™s means there's no need for a market no more and where once there were stallholders is now a free-for-all parking provider. 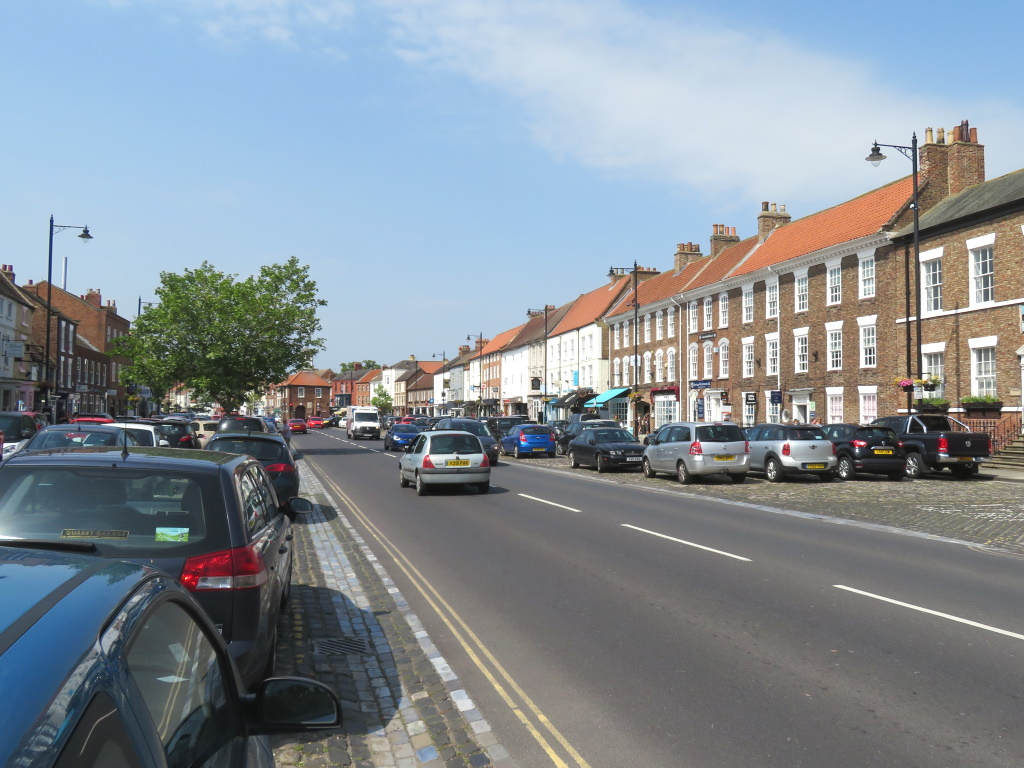 Not that kind of free, however, by that it's meant busy, and this well-kempt stretch is packed with up-market fleshpots, beauty salons and purveyors of things you don't really need.

These affluent offerings have attracted modern-day footballers and, come sundown, a fair few have been known not to throw just £50 notes around but also their fists, prior to passing out, face down, into a parmo, probably. 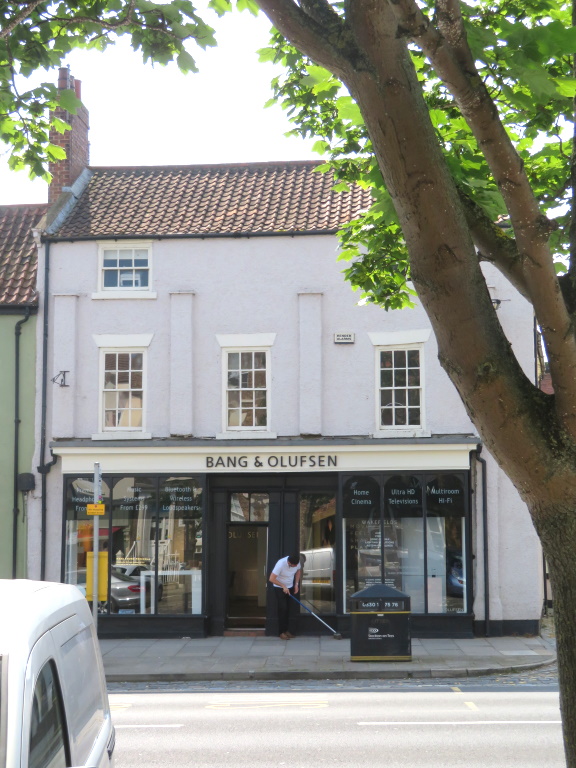 Not that a lairy left-back should put you off, it's like a smaller version of Alderley Edge but mostly Middlesborough not Manchester and the fact they've got a Bang & Olufsen™ is a big clue like you hadn't realised already.

The charms of Yarm are evident but the chimes of the old Town Hall's bells rang for revolutionary change when, in 2014, 90% of people voted to sever links with the controlling council in Stockton. 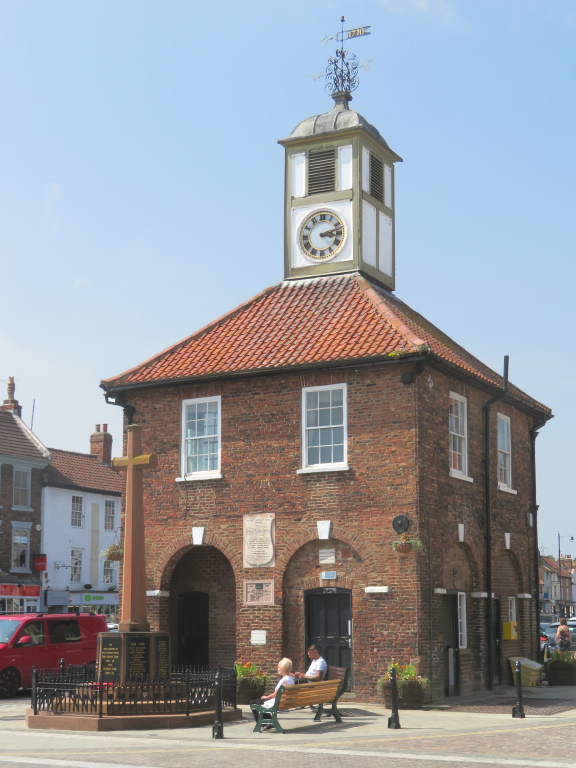 They hoped to hitch up with William Hague in Tory-run North Yorkshire but the resounding result was rejected so the Bolsheviks running Billingham are still responsible for the bins.

Less than a quarter of those eligible turned out and while it's good to see a frank and lively debate, it's not like these geopolitical polls ever cause any long-lasting problems, right kids?

The George and Dragon (High Street)

The largely Georgian constructions include the George and Dragon, which, back in 1820, hosted the meeting of a consortium including George Stephenson, no less. 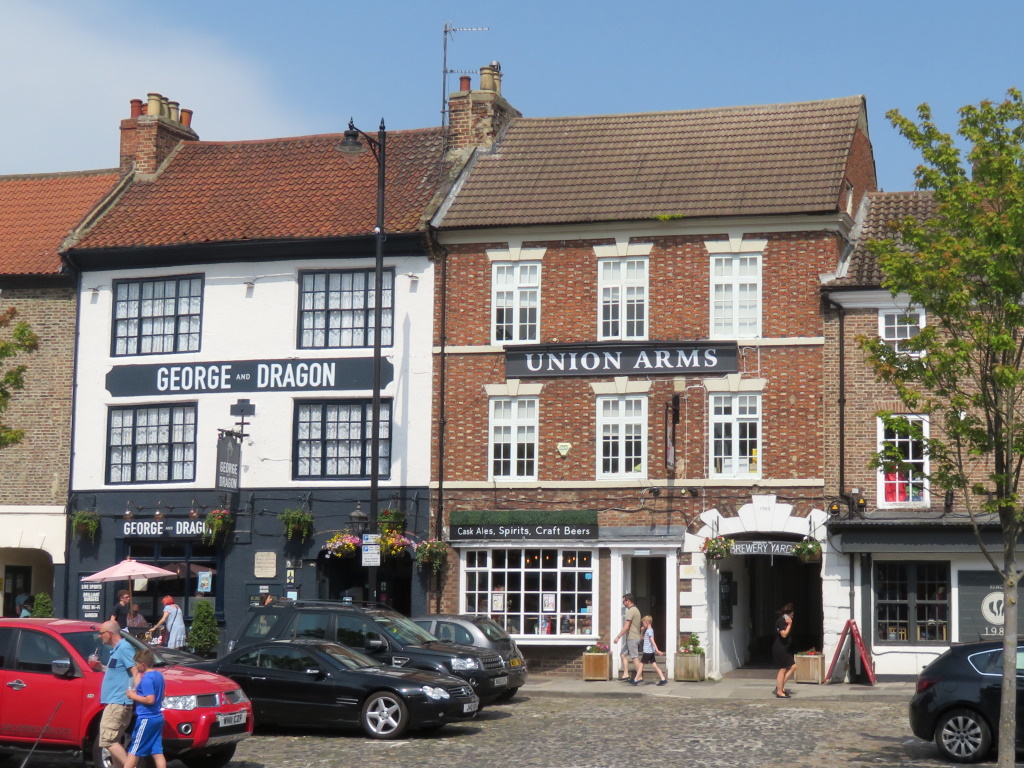 All this to raise funds for the world's first, steam-run public railway, no lesser, and that, by George, is one for those loco about the locomotive.

Being home to the first public railway in the world, it wasn't unreasonable to want to head south from Stockton but there's a problem with Yarm... it's got the River Tees looping round it.

No problem, get yourself seven-and-a-half-million bricks from Wickes™ and construct a 43-arch viaduct some 60 foot above the river. 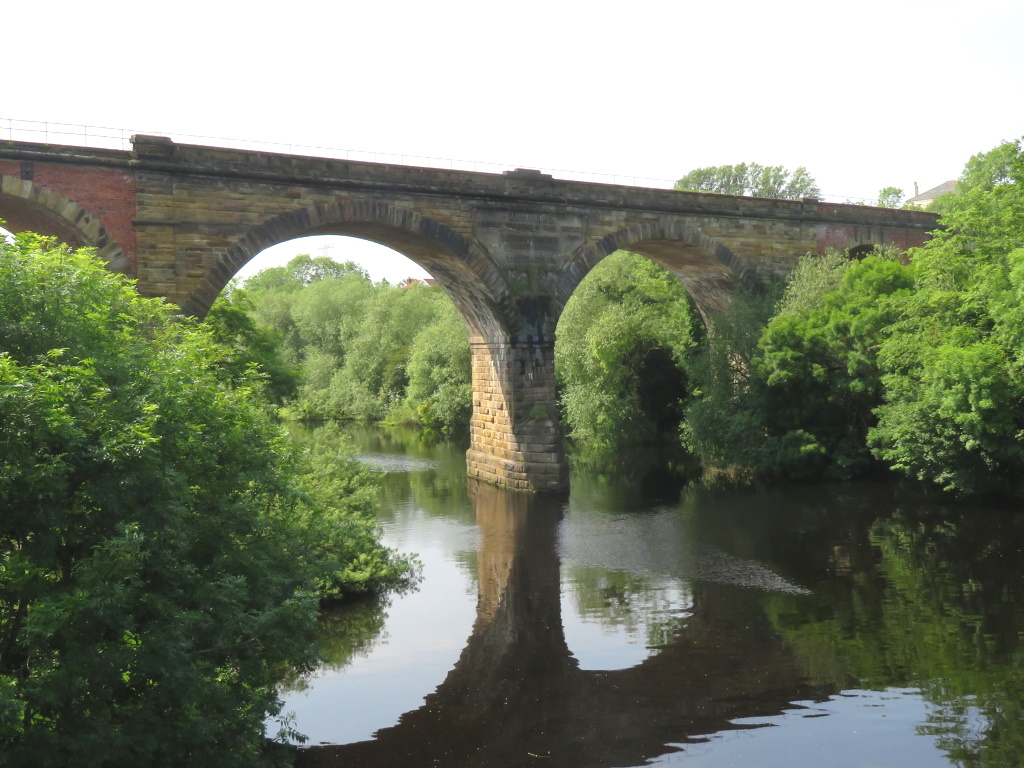 All of this built-to-last, Victorian engineering from the 1850s and the trains still trundle over on their way down to Leeds and even on to fancy London if you're too much of a skinflint to fork out for the fare from Newcastle.

Below the road bridge, there's access to True Lovers' Walk, whoever they were, and the river, which is the River Tees, of course. 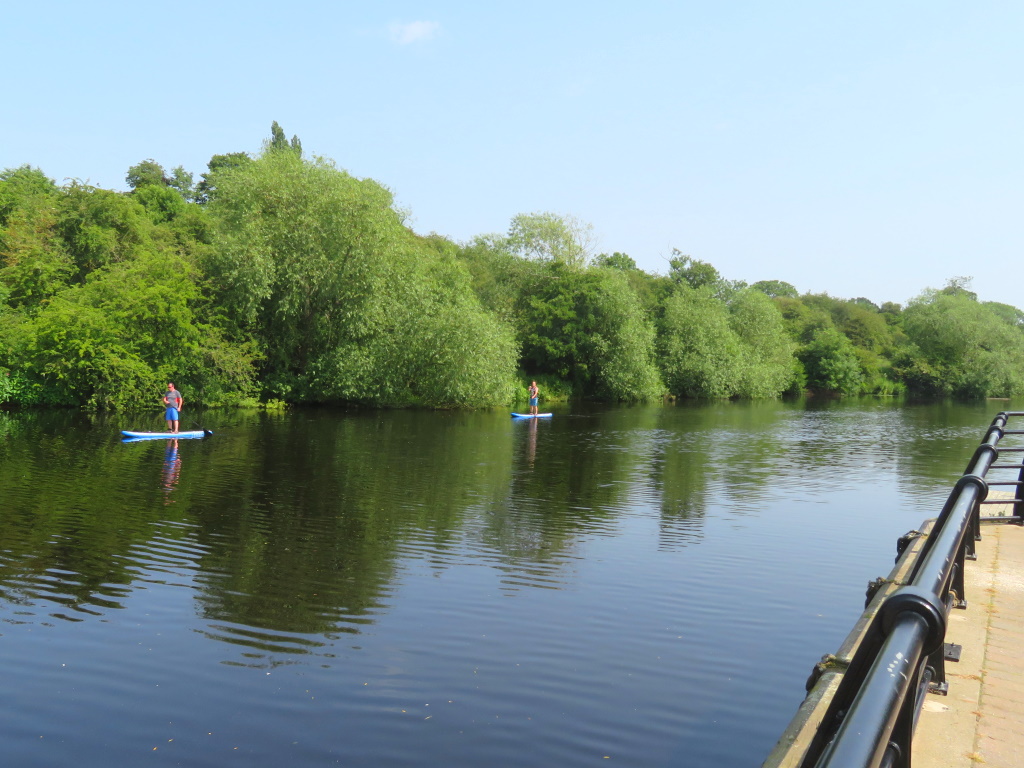 The River Tees you say? Home to one of Europe's busiest container ports and nothing more than a chemical overflow pipe that drove the seals from its mouth?

Well, you're forgetting it's nearly 90 miles long and rises in a remote part of the picturesque North Pennines.

Cauldron Snout and High Force, England's highest and biggest waterfalls, are in Teesdale, a designated Area of Outstanding Natural Beauty and, as should be known by now, they don't hand them awards out willy-nilly.

That all adds up to the Tees being the best river in North East England and, since they cleaned up their act, the seals are back since you ask.

Not that the seals can normally be seen this far upstream, unlike the paddleboarders, for there's something significant in their way.

The Tees Barrage may well help stop RSPB™ Saltholme from getting too soggy but its primary use is leisurely. It stops that stretch of the Tees from being too tidal, you see, with watersports the regenerative reason for the project.

Whitewater rafting is the main attraction and there's a river cruise from Yarm, when in season, which will nearly get you there but will definitely bring you back. 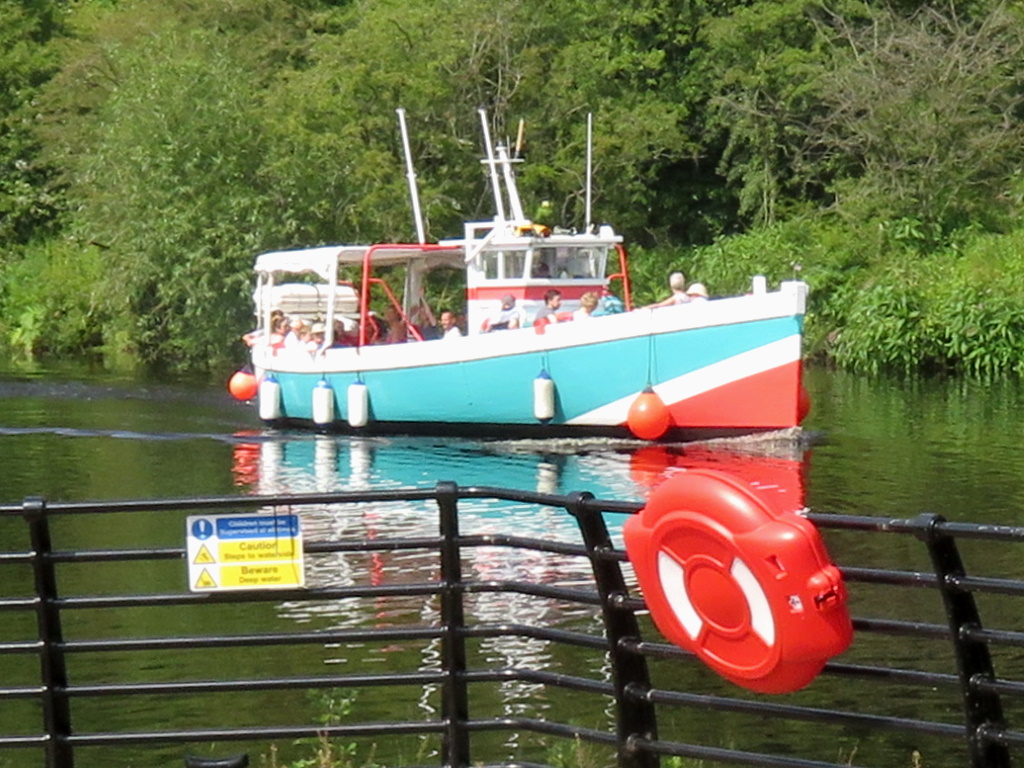 Five minutes earlier and SlyBob would have been on board in a flash but, without having done even the most basic form of homework, embarcation wasn't an option so nothing wrong with a friendly wave, eh?

An eye-catching high street and a kinky river are all very well but that's not why you're really here, is it? You bunch of whistle-blowing loonies want to know about Tall Trees, don't you?

Not poplars but the popular nightspot with 7,000, full-to-capacity glowstick wavers providing most of Teesside's lighting every other Saturday night.

All this in the grounds of a hotel, it made for a lost weekend on all sides, mainly revellers from Tees, Wear and Tyneside but also those unwittingly booked in for some hiking in the Cleveland Hills. 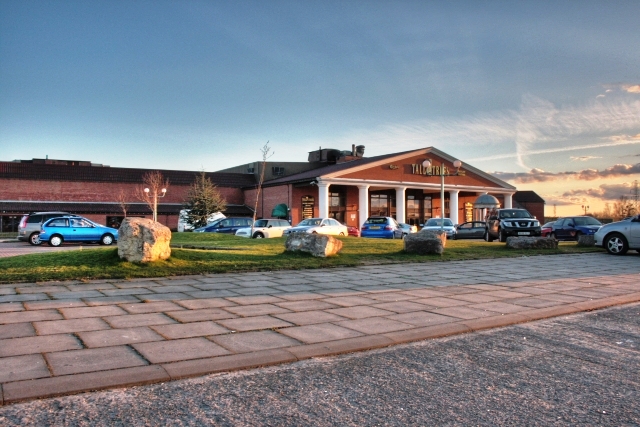 It was a raving success until the noughties arrived and is somewhat surprising for somewhere near the middle of nowhere in a pre-Uber™ era.

It's a housing estate now following a, taps nose, fire that  The Trammps predicted over 30 years earlier.

That leaves a little time to try and locate Yarm farm, the original homestead around which all of this grew, possibly? It seems there's no such thing although the name suggests a pool full of fish that was namechecked in the Domesday Book.

Since this is North Yorkshire, remember, there are potential visits to Barden garden, Blades glade or even Malham Tarn barn so, having missed the boat and with no high-end retail requirements, there's not an awful lot left to do here until the disco opens...