Over here in Umbria[1], it's a little like  Tickle-on-the-Tum only Passignano's the place and Trasimeno's the body of water. 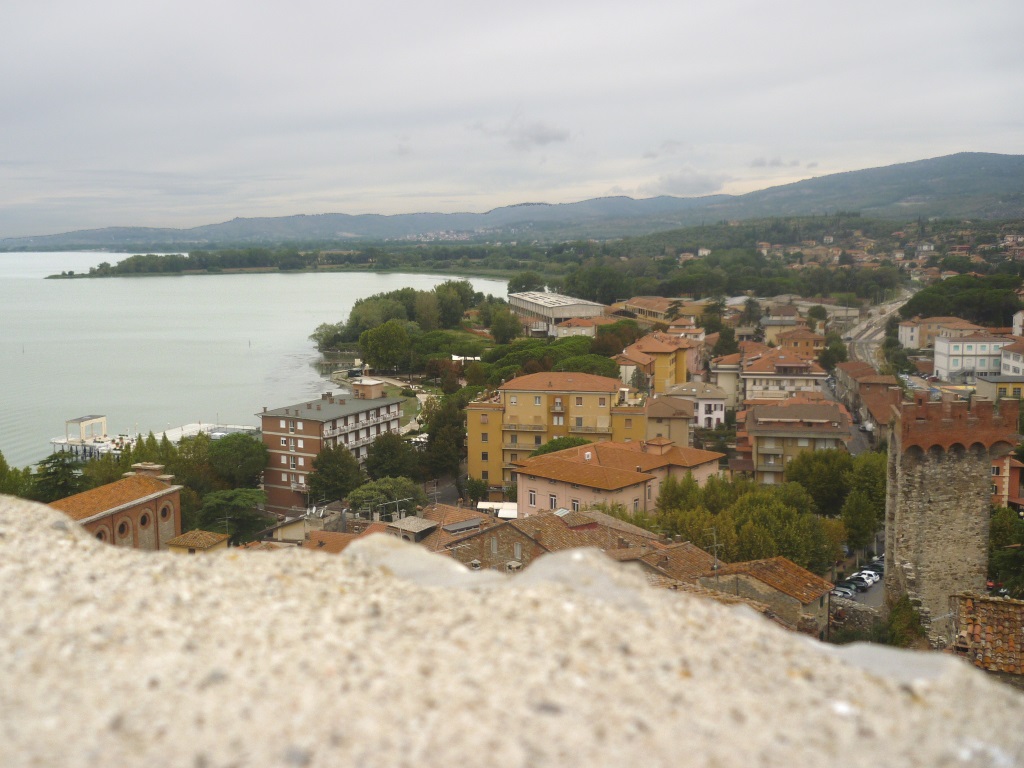 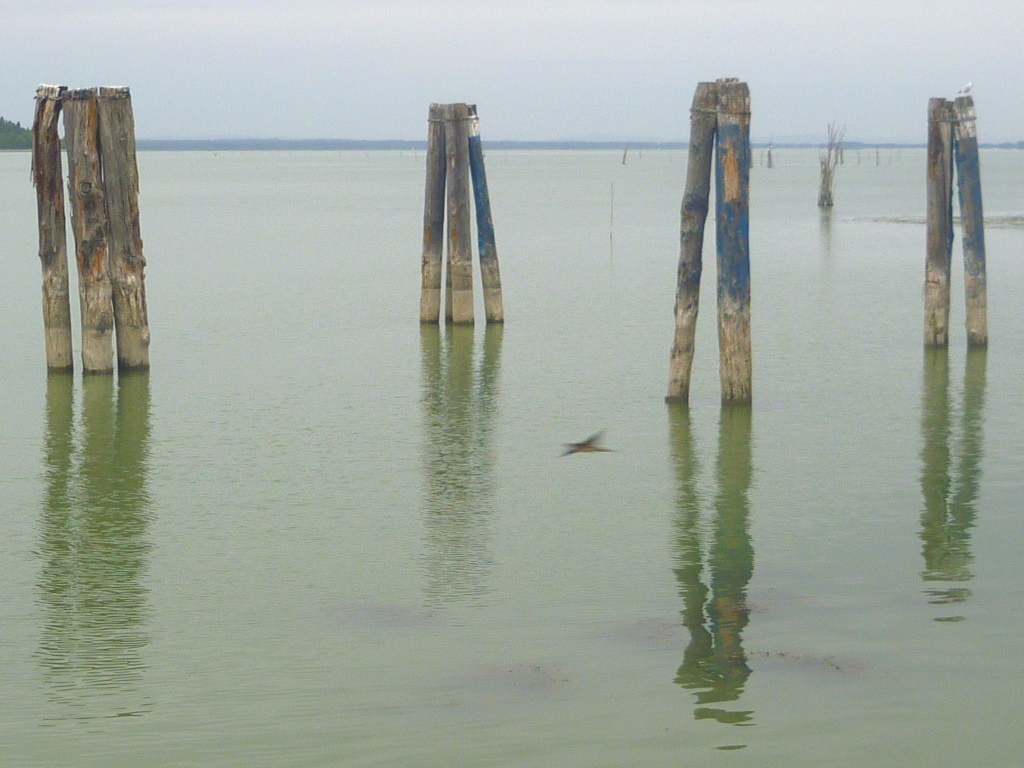 This ain't no river, though, it's a lago or a lake if you'd rather and the fourth largest in Italy after the ones that most people go to  up north.

That included Percy Shelley, no less, back in the early 1800s and his often muddied mind may have convinced him not to detour south. Despite 50 square miles of water, Trasimeno is largely just 15 foot deep and that's the main reason why they're not swarming here in vast numbers.

People, that is, Shelley included who would have just been sat here sucking his quill anyway because there's really not much that rhymes with 'mosquitoes'.

[1] You know how Cumbria got its name don't you? A Roman soldier is doing the night shift on top of Hadrian's Wall when there's a shout from down in the ditch. 'Where you from?' to which the soldier replies 'Umbria'. One of them newfangled but rotten tomatoes splatters on the soldier's shield and the insurgent runs off shouting into the woods. Sensing dissent but not quite catching the words, 'I think he said "For Cumbria?"... Ah! So that's what they call this place.'

Satisfactory, self-catering lodgings with a small swimming pool, which with hindsight was a little too far from town. 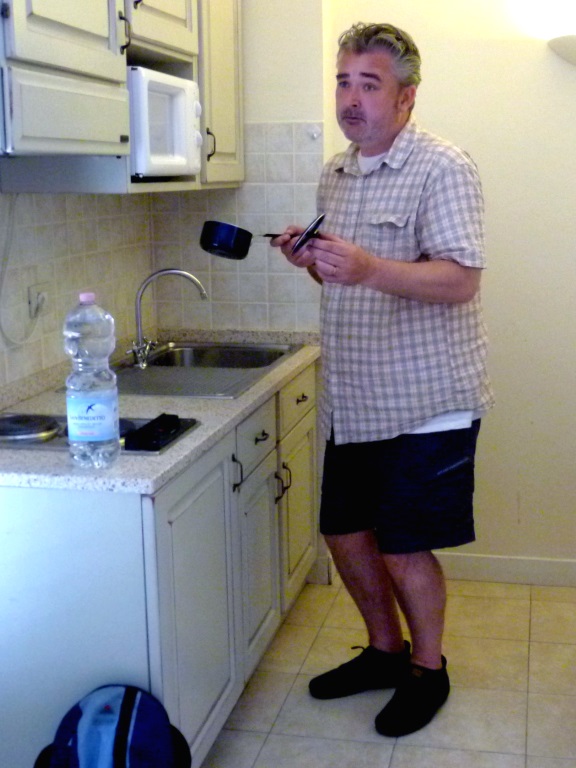 Maybe it's an Italian thing but the small kitchen didn't contain a single item of crockery or cutlery. Luckily, there's a supermarket next door for some paper plates and a tiny saucepan that you'll be needing when you're confined to barracks during the next downpour.

The small town of Passignano itself is solid if unspectacular so you'll spend most of your time here elsewhere. Castiglione, on the western shore, is home to a  palace and castle combo but the 'Fortress of the Lion' isn't any older than Warkworth. 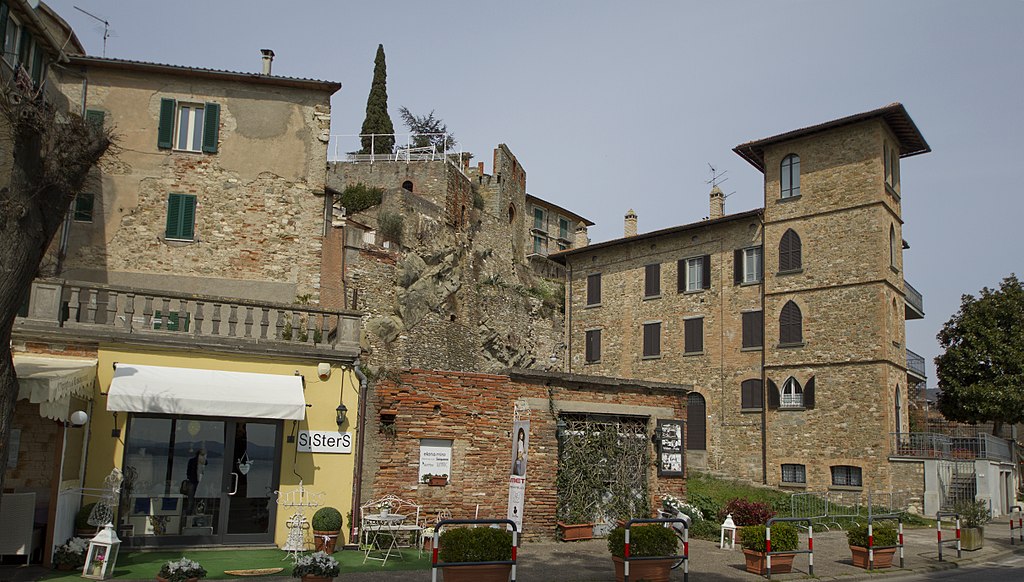 They'll let you up and inside for a few €euros where, amongst the mainly standard medieval fayre, it's one-way traffic on the narrow ramparts with a, not entirely unexpected, nice view of the lake. 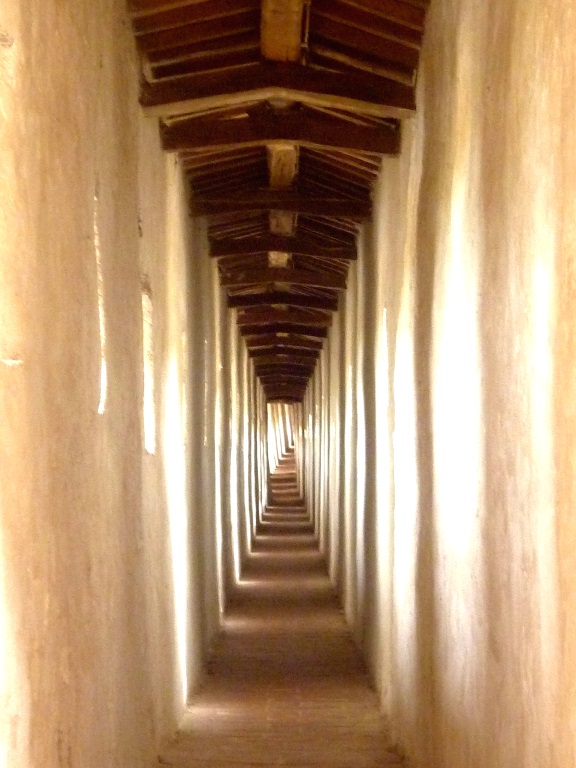 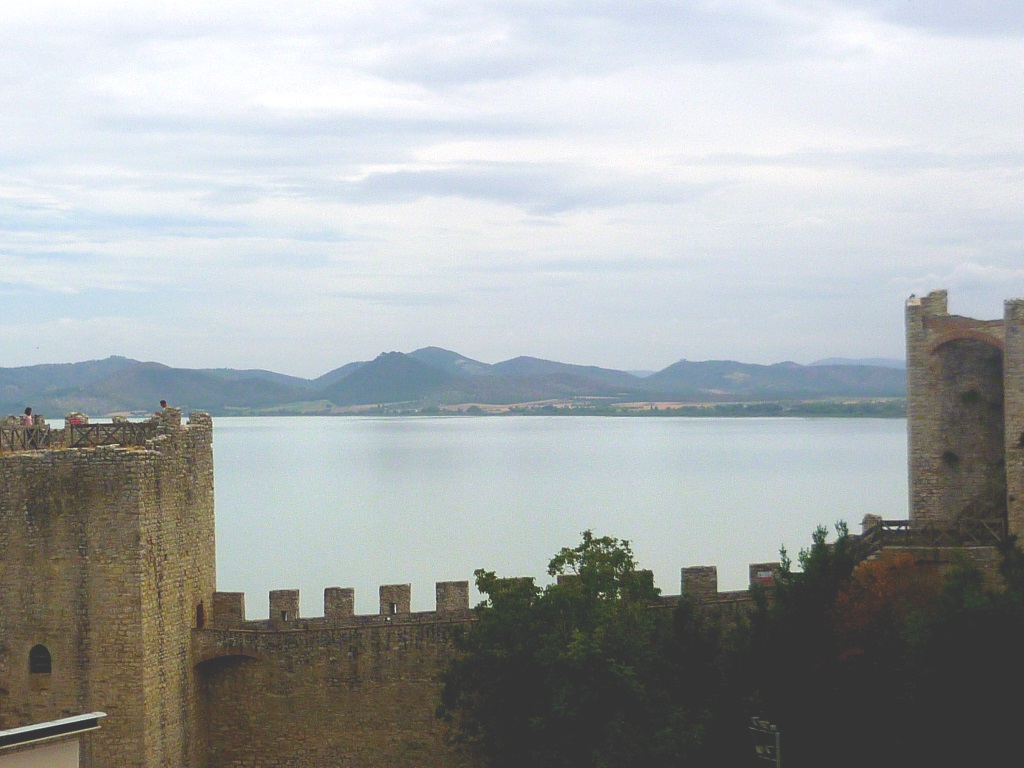 To distinguish it from dozens of others in Italy, the full name of the place is Castiglione del Lago and is one of a few acceptable pit-stops on the 25-mile-or-so[1] drive round.

Pick of the half-a-dozen-or-so pizza and pasta providers, possibly, because they've got Pesce del Lago on the menu here. Literally, 'lake fish', yum, the flakes are of an unspecified species although it's likely to be pike or carp or tench and wasn't as muddy tasting as expected.

They shouldn't be eaten, really, they keep the insects down, you see, but millions of mosquito larvae will still make it out even during September.

The terrain hereabouts is best described as ' hilly' and it's up and just five miles east that you'll find yourselves in Castel Rigone, a smart-looking village that sounds to be popular with some English. 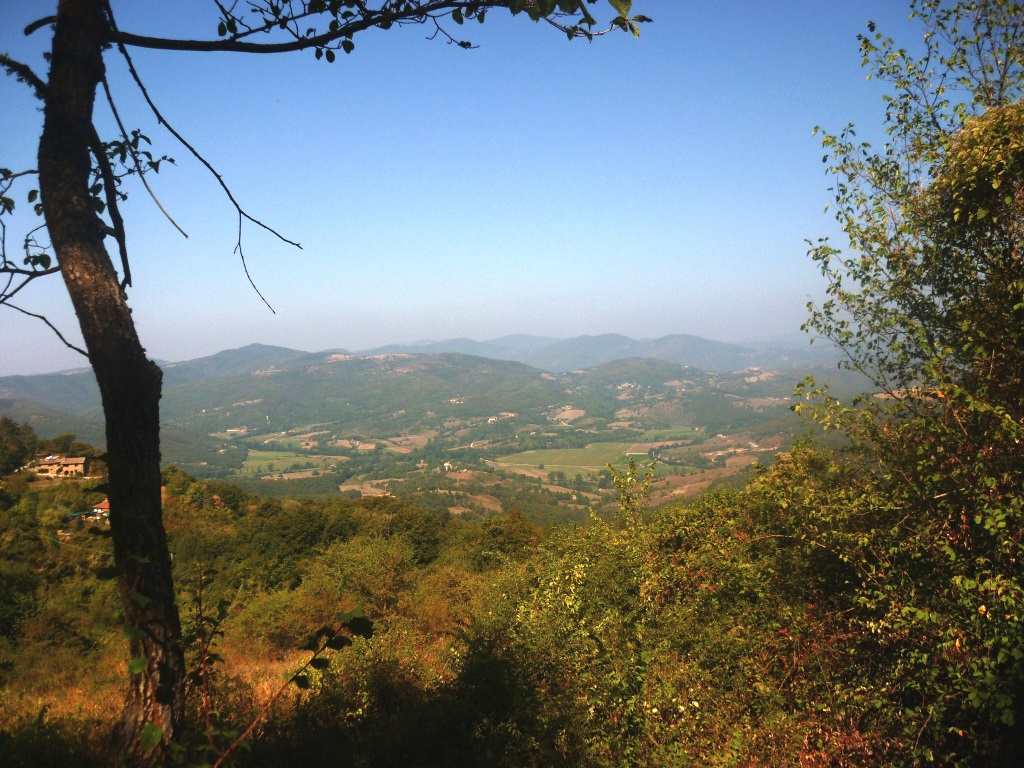 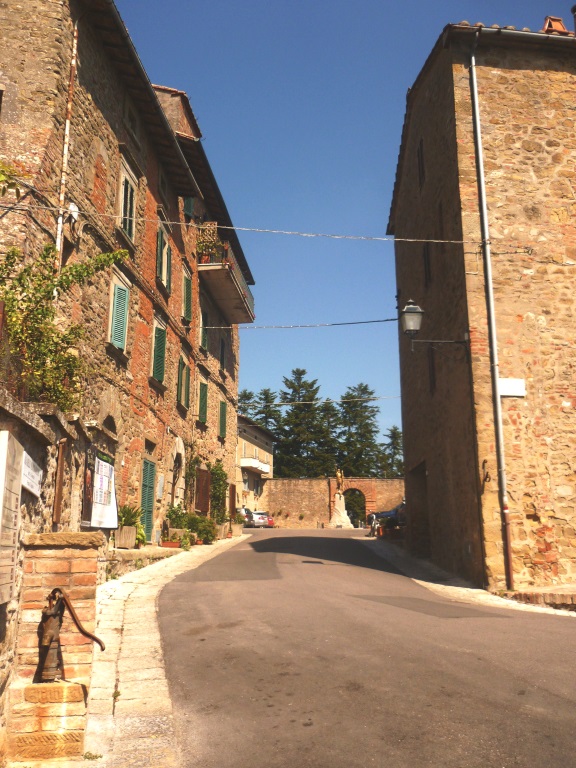 Highlights include Castel Rigone Calcio's football ground and that's a joke, of course, the real one was inexplicably overlooked and the team was disbanded the season after this visit. 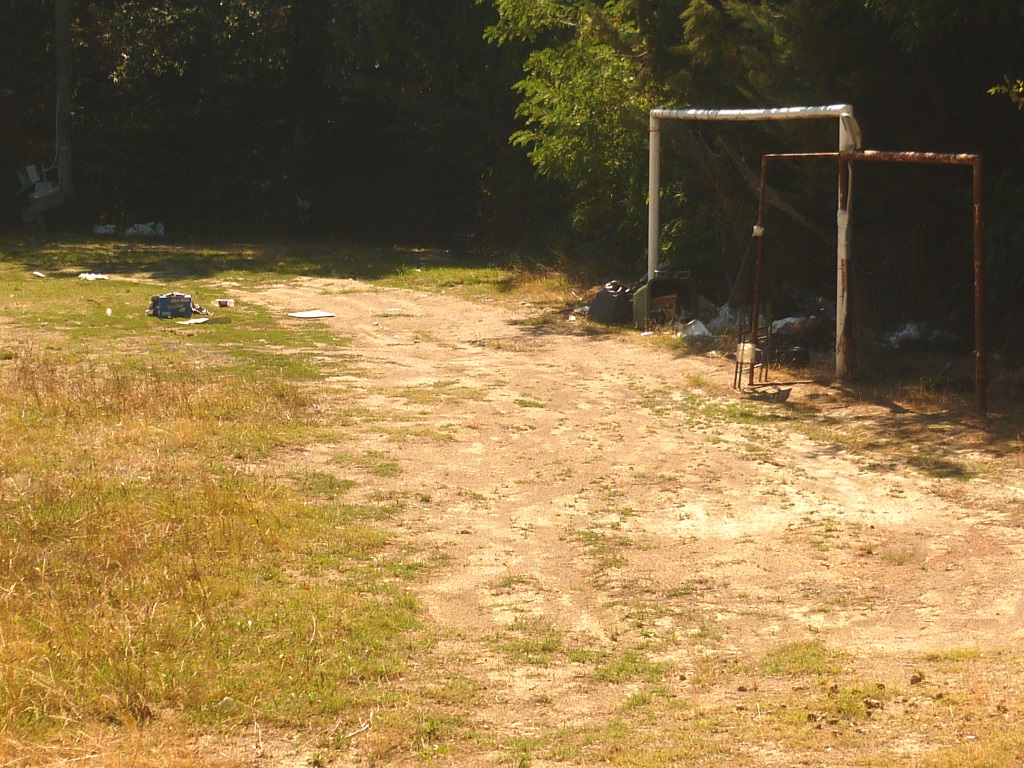 The ground's now as lively as the local cemetery whose walled caskets were not so much forsaken but, rather respectfully, pictures not taken.

Umbria's not quite as refined as its next-door neighbour Tuscany, which while no stranger to mountains in the north, here has the Apennines running right through it. 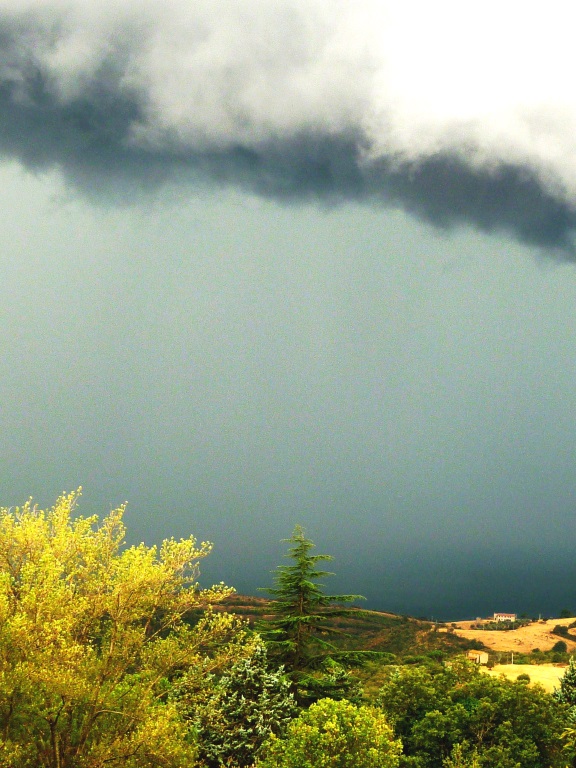 That'll explain the late-summer thunderstorms, probably, and it'll soon 'Piove a catinelle' as they say in these parts.

Just a few miles further on through Castel Rigone, the fortuitous find of a roadside restaurant with suitable seating outside. A plateful of antipasto to share, some bits less familiar than others, then some pasta with 'wild' boar.

There's phrasebook fun to be had with the waitress... 'Ci sono cinghiali nella foresta?' although a man on the next table had to help with the translation. The silence wasn't because of not being understood, more of an 'Si quindi cosa?' Well, you don't get them in  Chopwell Woods luv! 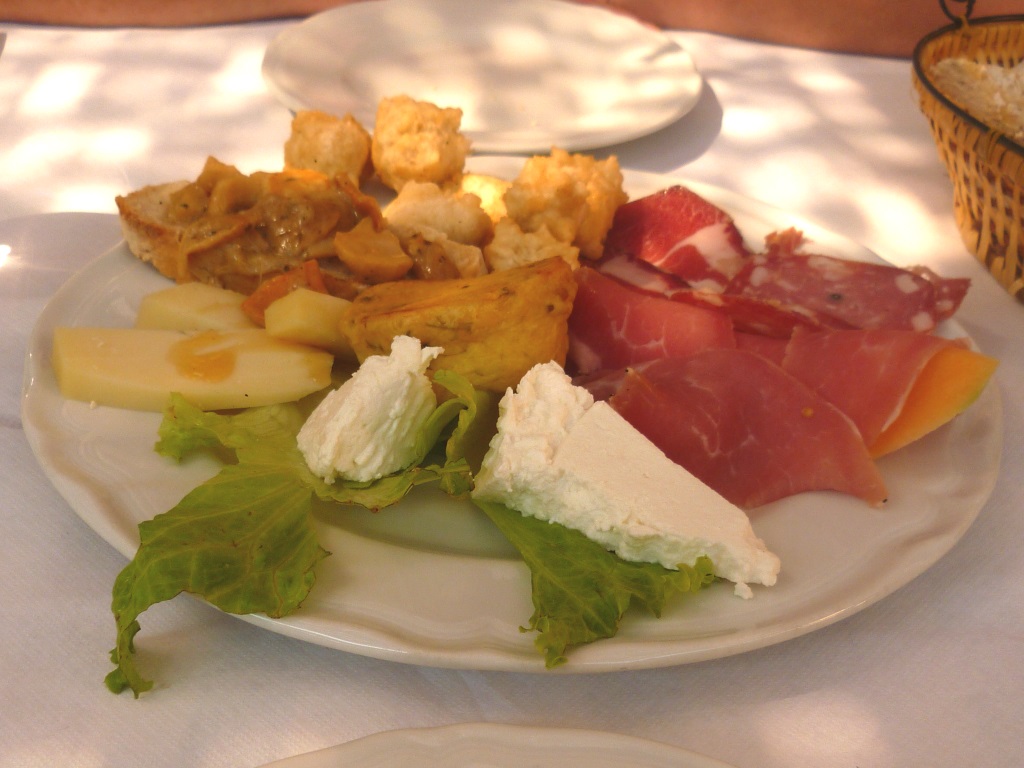 As for the fella, a plate of antipasto to himself, pasta then a steak the size of a wild boar's head. With his briefcase and business-casual dress, it looked like he'd soon be heading back to work. These Italians really do know how to do lunch, don't they?

Meanwhile, back in Passignano, there are three islands in the lake although Isola Maggiore is the only one that's accessible from Passignano. It isn't, however, the largest so it's not quite your standard Major \ Minor, Majorca \ Menorca scenario here. 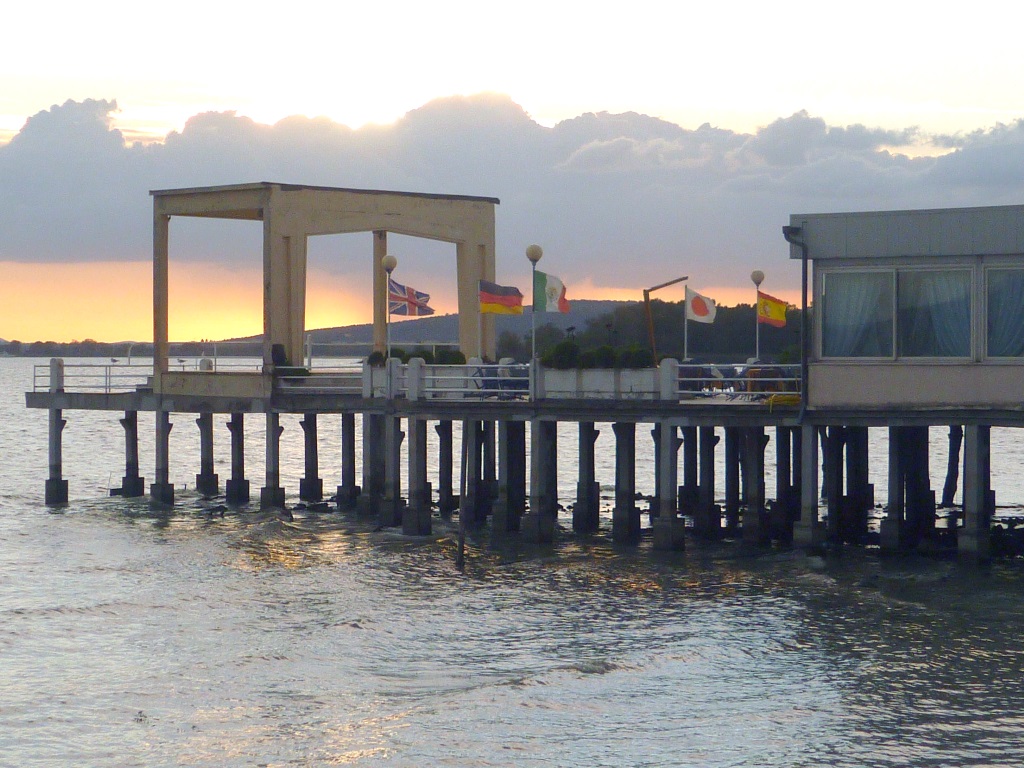 That'll be Isola Polvese and the troublesome negotiation[1] at the ferry landing involving having to change to get there, even though you didn't want to, was put down to the local dialect.

St Francis once spent a Lent on Maggiore, they say, and yes, that's he of Assisi fame and at just 60 acres, or about 100 abandoned football pitches, you can walk around it in less than an hour. 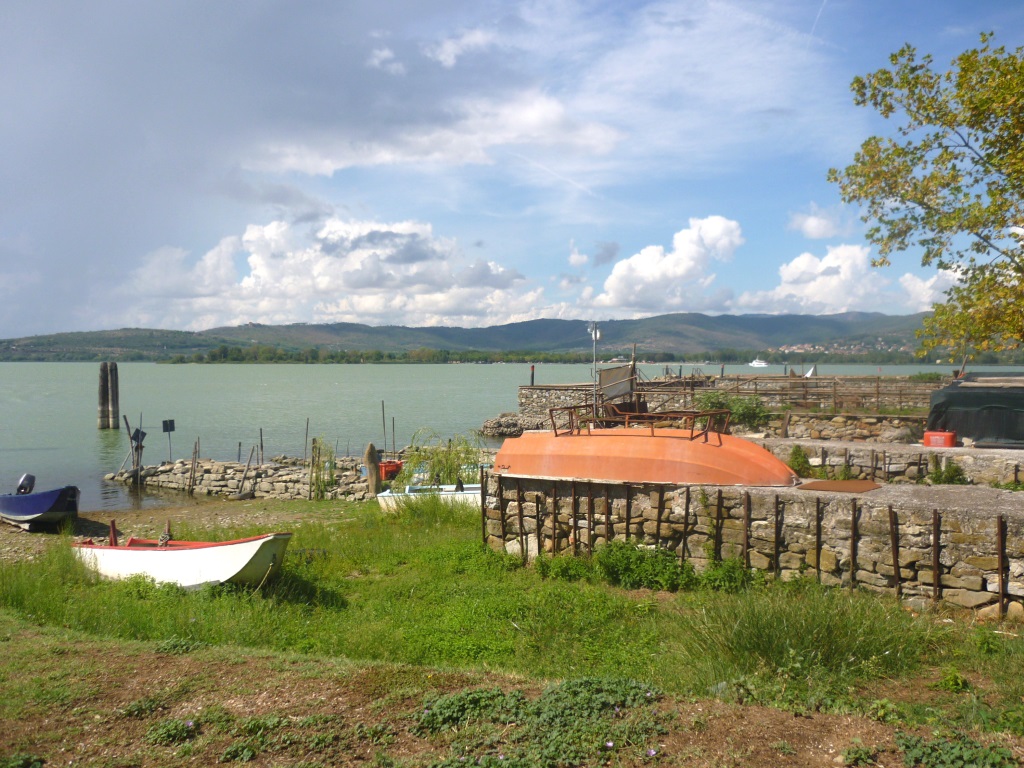 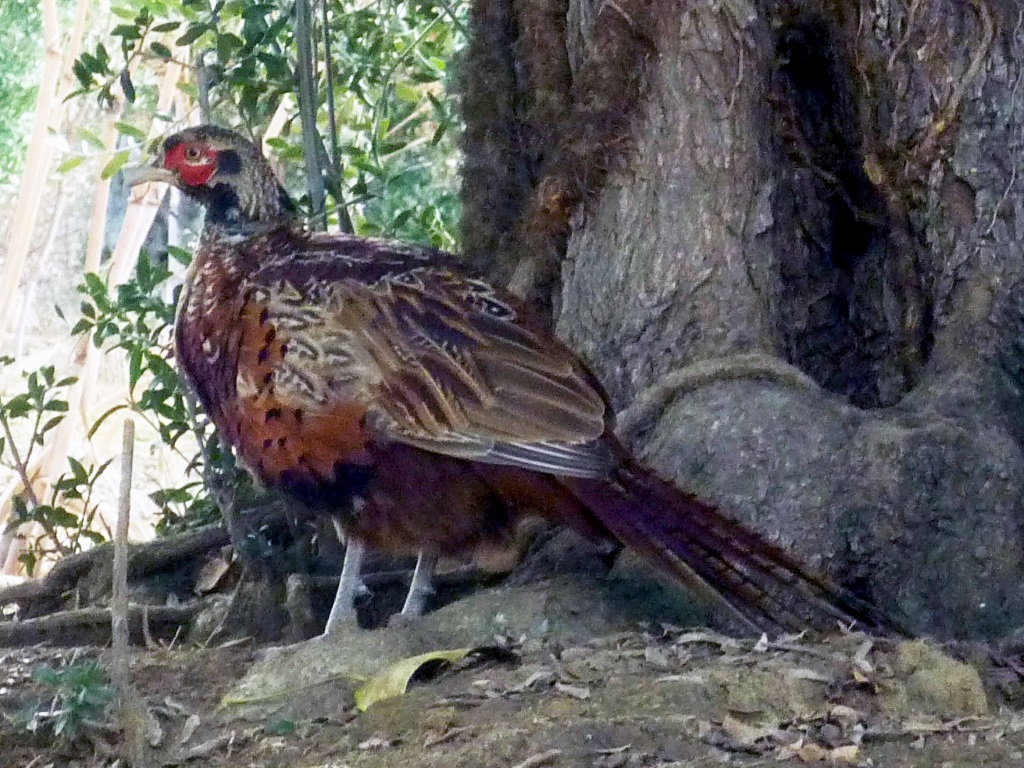 Highlights include a couple of churches and a crumbling mansion, none shown, and the odd, exotic-looking pheasant. They're not thought to be on the menu at the Ristorante L'Oso but the cocksure waiter will soon lose his head when a party of 30 pile in off the ferry.

There's a small, Irish lace-making 'industry' and museum here, obviously, although it's not entirely clear why and how. 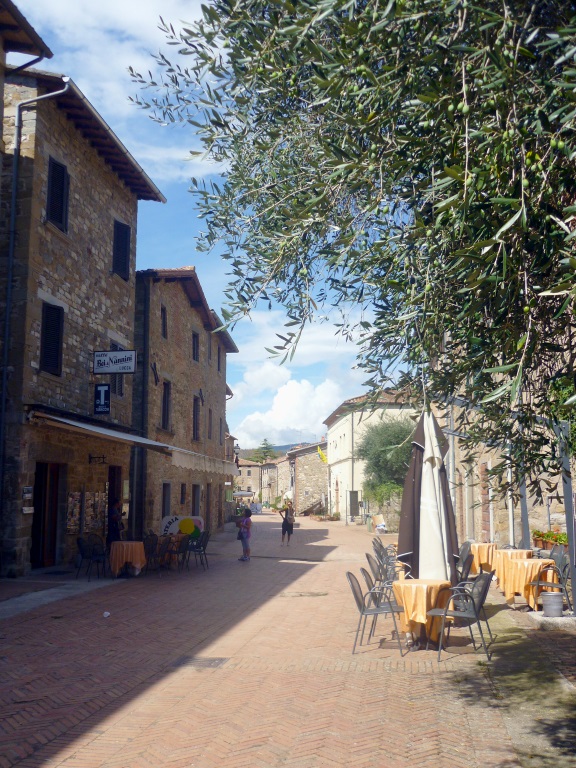 By the 1900s, fishing was dwindling so to boost his coffers, some local aristocrat or other exploited the net-mending skills of the idling wives of the fishermen.

The Irish connection is said to involve a friend of his wife who was brought in to teach them a different kind of knitting and whatever profits he made from the fish, he was soon Dublin it from the lace.

Meanwhile, back in Passignano, the reason for being here is because it's not too far from Tuscany, which isn't that hard to reach if you've a local flight provider. It's a chance to mooch around an area that's not quite so well known and there's also a train for when you're too scared to drive to Perugia. 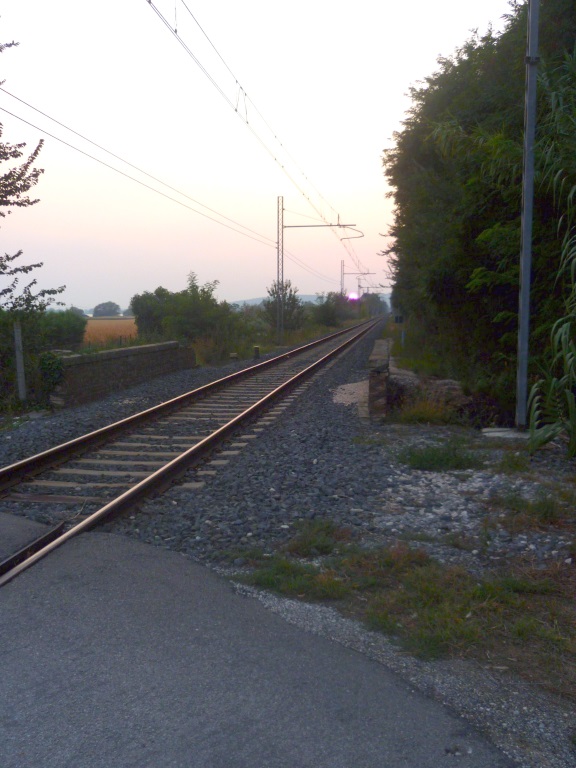 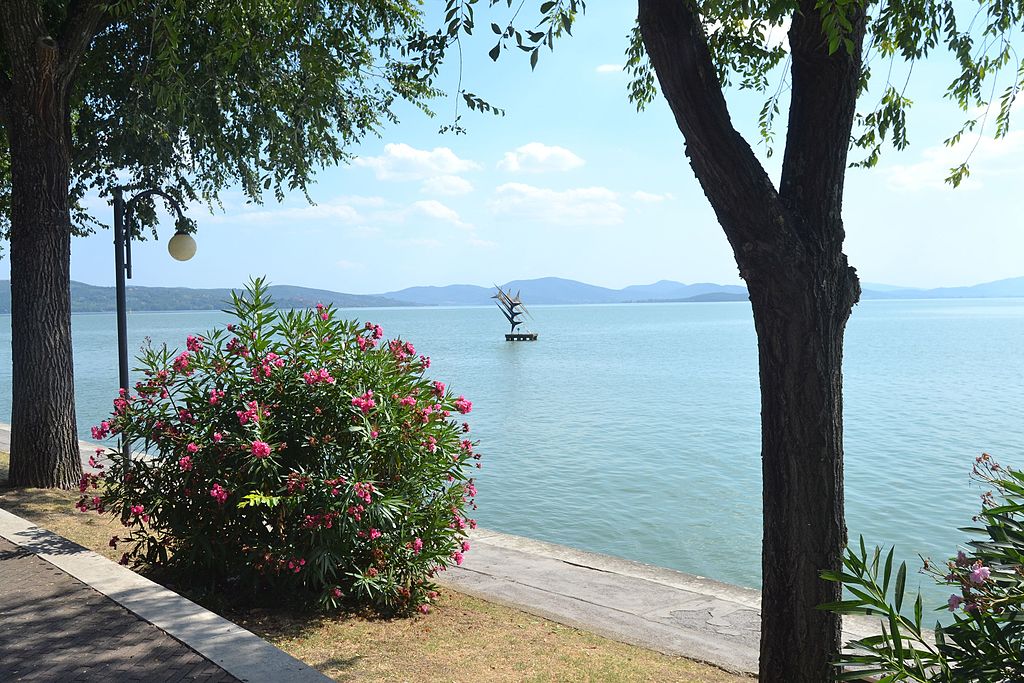 There's some hardcore strolling to be done down by the waterfront and most of the mosquitoes have scarpered by mid-September[1].

It's a shame that Shelley didn't make it here because the fig-eating fop might well have written, as he popped yet another one into his gob...

There once was a lake of mosquitoes,
That would bite arms, legs, heads, necks and feet, toes,
There's not yet a train,
And what with the rain,
Tuscany's where me and Keats go.

Nominally an ice-cream parlour but the big screen's up for the match and there's Peroni™ on draught. Where better to watch the Azzurri cling on for a disappointing 2-2 draw in Bulgaria with a crowd of increasingly crabby locals? 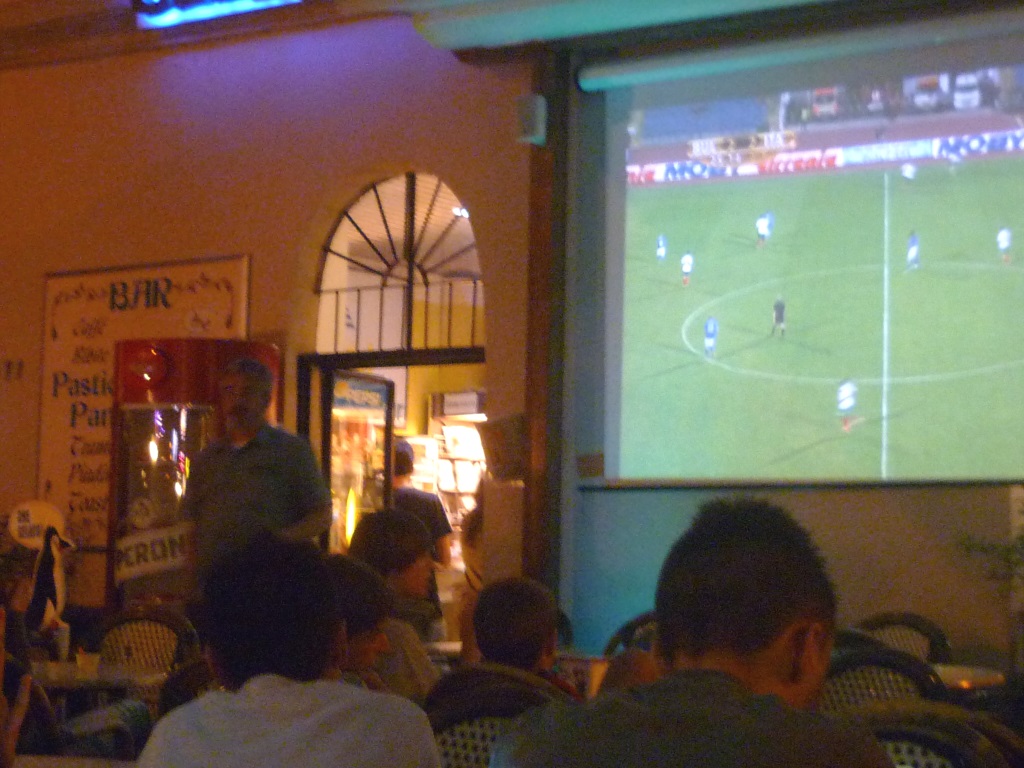