You'll likely have arrived in Dachau by train. It's only 15 miles north-west of Munich city centre and takes roughly the same number of minutes.

In the 1930s, some prisoners would also have arrived here by train, this the old station platform for the camp. For others, they would have been marched north-east from Dachau's main Bahnhof and beaten on the way to boot. The bus that brings you here follows the prisoner's route and you can walk the signposted, two-mile  Path of Remembrance.

The smart-looking buildings you pass on the left, just before you arrive here, were requisitioned by the Nazis for offices and accommodation. They're still in use today and serve as the training headquarters for the Bavarian Riot Police.

Just behind the old station platform is the main gate to the campground. Visitors enter by here and the first thing you will see is a Jewish gentleman sobbing at the memorial wall. That's the main reason for most of these photographs being borrowed from elsewhere. Quite simply, that's simply not right.

The buildings at the southern end of the campground originally housed the kitchen, laundry, showers, workshops and a prison block. They're now the main source of information for visitors and a required read. 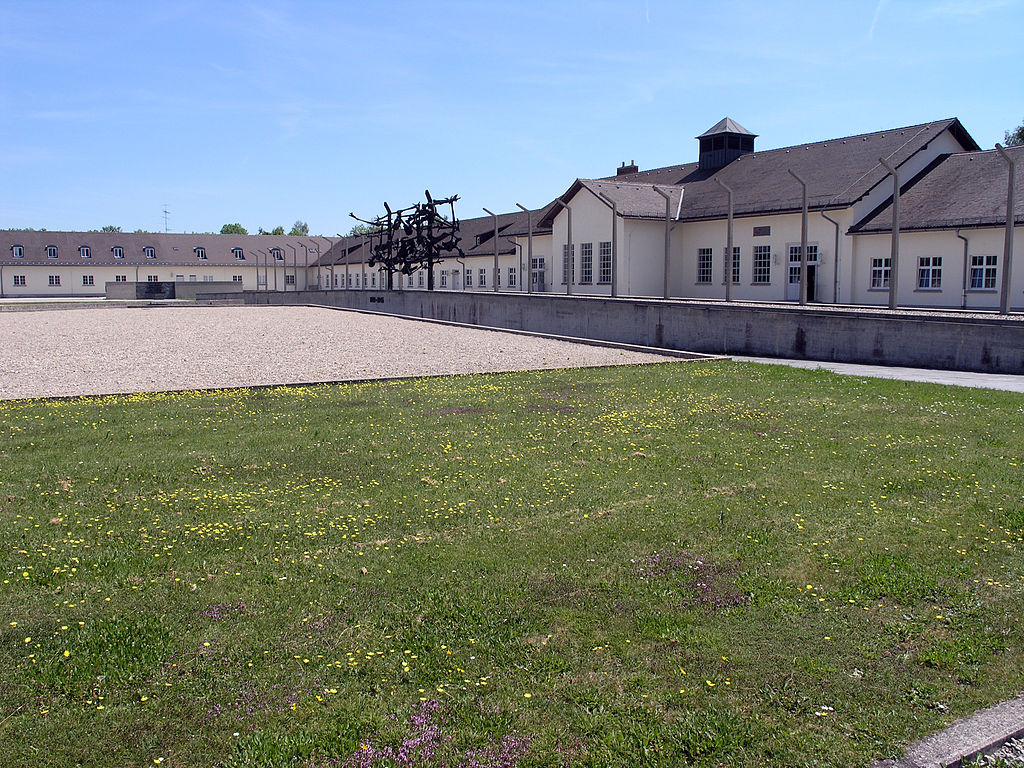 Opened in 1933, this was the prototype on which all other concentration camps were based. Originally housing political opponents of the Nazi government, it soon expanded to accommodate religious groups[1], homosexuals, targetted ethnicities[2] as well as the physically and mentally handicapped.

The memorial sculpture is by Yugoslav artist Nandor Glid who himself survived internment in a labour camp.

Two of the original wooden barracks have been reconstructed. Visitors can access these but only the foundations of the other 32 remain. In total, these were designed to hold 5,000 prisoners. 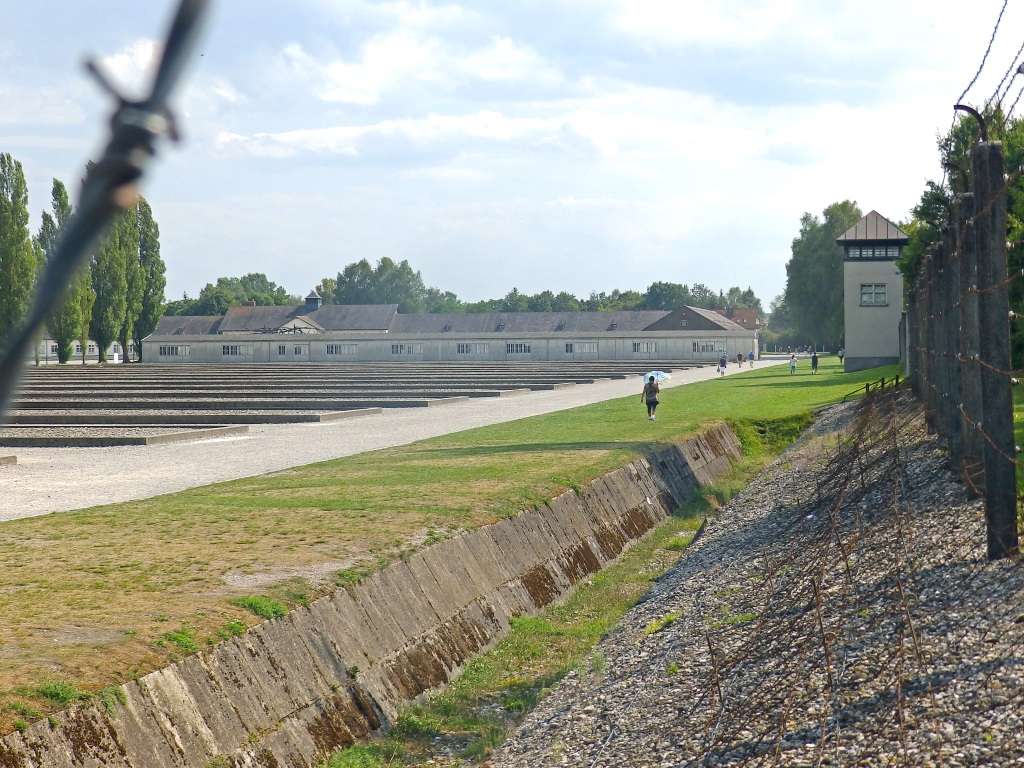 In 1945, 30,000 prisoners were liberated and roughly a third of those were found to be close to death.

Four religious memorials have been built at the northern end of the campground since 1960. The Roman Catholic Mortal Agony of Christ Chapel is circular and open and deliberately faces the other side of the camp to symbolise liberation. The Protestant Church of Reconciliation is strangely modernist and the angular concrete leads you underground.

The Jewish Memorial also takes you underground and is naturally lit by an opening in the ceiling. The slope is deliberate and symbolises the attempted extermination of Judaism in Europe. Just outside of the nearby exit gate, the small, wooden Russian-Orthodox Chapel is the most recent and sits on soil taken from the former Soviet Union.

Exiting by the gate will bring you to a building that should be identifiable from its chimney, the crematorium. 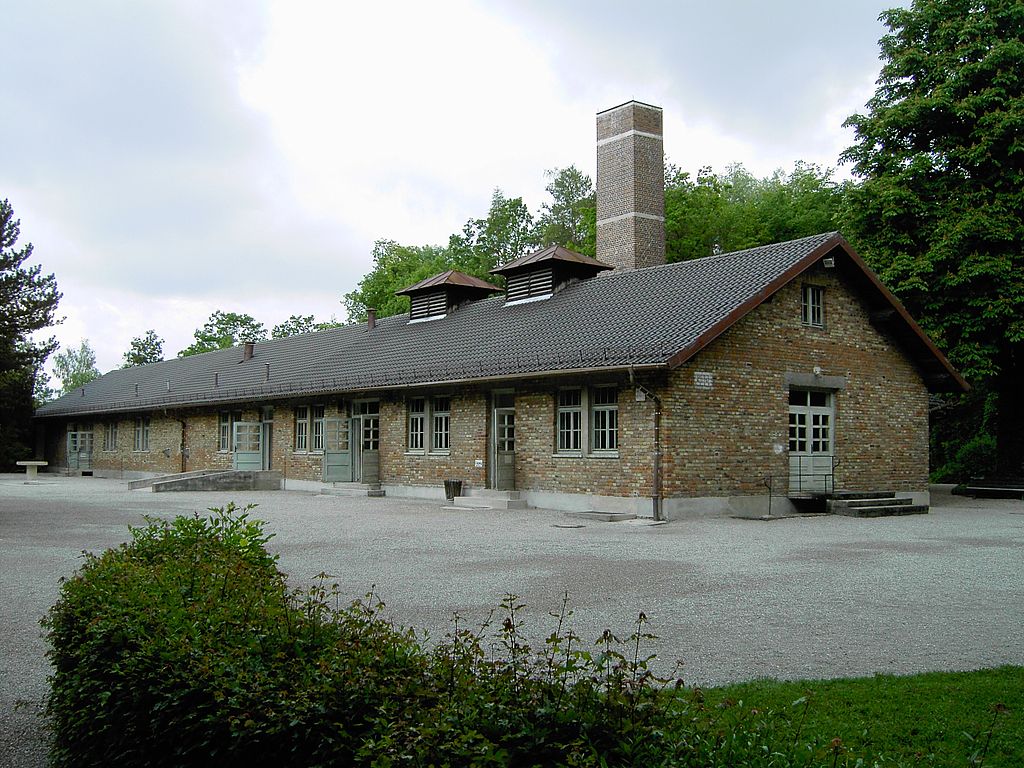 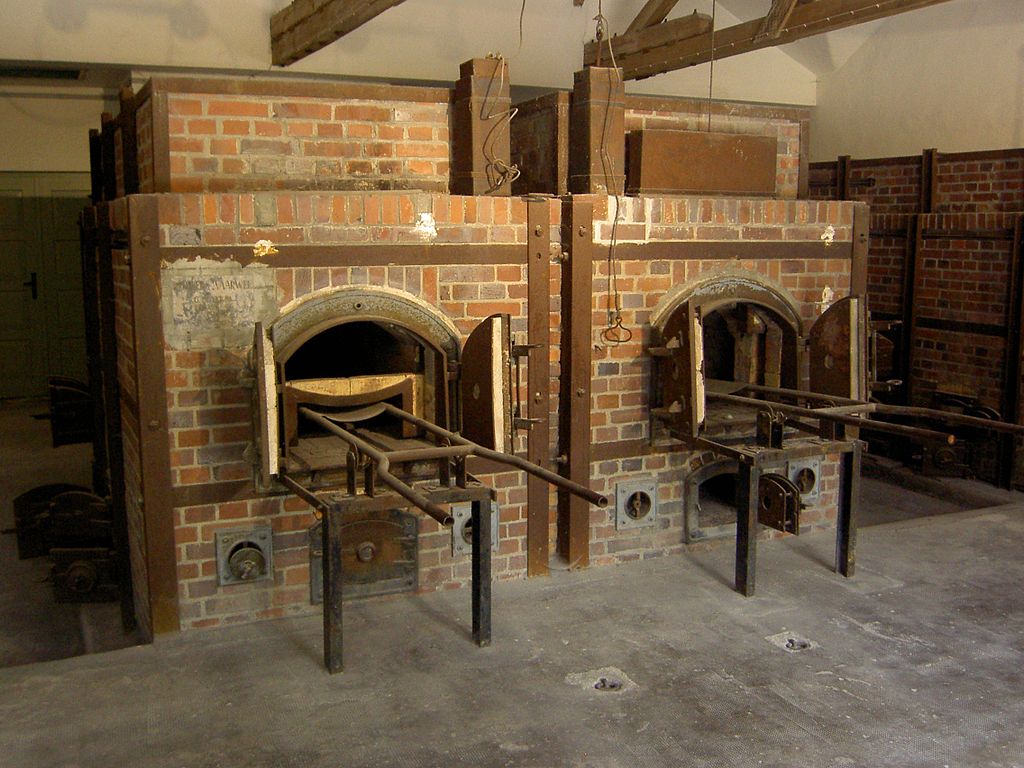 By 1944, even 24-hour operation of the ovens was unable to deal with the high number of daily corpses that required disposal.

There's a sign at the main entrance warning that some content might not be appropriate for children under the age of 12. It's probably hard enough for most adults to get their heads around this insanity?

In the same building, it's said that the gas chambers were never actually used here[1]. Researching this, some blogger or other claims that they were built by the Americans after liberation. What? To make the Nazis look bad? Now, not much usually gets these hackles up, including the above, but to the dad who hasn't yet learnt to read... your four-year-old child is being allowed to run around screaming in here. Really?

Back outside, the birds do sing and the trees still sway and swish in the wind. It's definitely hard enough for most adults to get their heads around this insanity.

The origin of the name Dachau can be traced to the Celtic language and the tribes who inhabited this 'loamy meadow'. Despite today's experience, the town centre could be anywhere in what's considered to be Northern Europe although perhaps not Glasgow. There's a generation approaching for whom there is no visceral connection to any of this afternoon. It's not being suggested, it's definitely not, that a visit here should be one of the entry requirements for pleasure seekers to Munich[1].

It's not suggested, it's definitely not, that you hand your passport in at the airport and then get it back once you've visited the camp[2].

That might mean some lengthy queues towards the beginning of Oktober but for some of those people, at least once, they won't have forgotten what they did the day before.