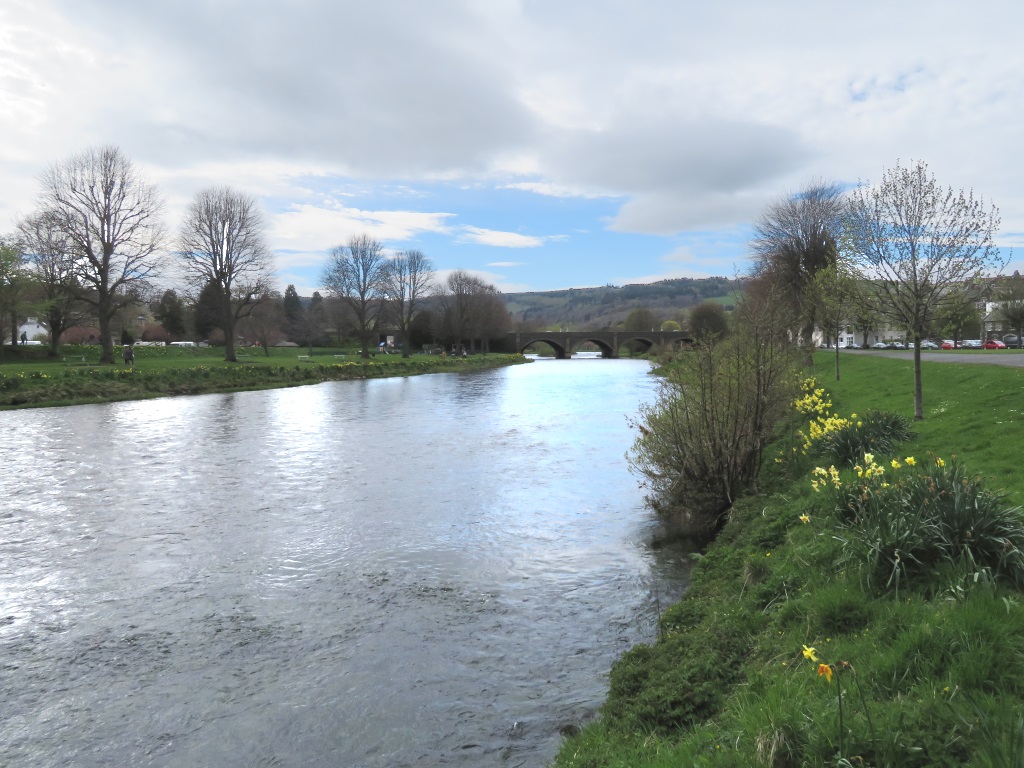 By tweed, what's really meant are the woolly mills but it's not like they needed the Tweed, the river that is, to transport it, the tweed that was, because Edinburgh's only 20-odd miles up the road.

Peebles isn't particularly off-putting but most of today will be spent huffing and puffing in the countryside and it's all the fault of Paths around Peebles, a Pulitzer Prize-winning publication[1] for the periodical plodder at least it would be if this was Peebles, Ohio.

If you fancy following in some famous footsteps, for a not too strenuous stroll, the starting point is the free parking next to it, the Tweed that is.

[1] In the Public Service category, probably.

There's a footbridge option over and up to the high street where a man in the Tourist Information is a little too keen for your email address. He's very helpful, however, and will not only accept your £2 payment for Paths around Peebles, he'll also throw in some suggestions of his own.

It's how it's known to be called 'Hammy' and not Hamilton Hill and, with that little bit of local knowledge, you'll be strutting off like you own the place.

It's just a shame they've all since closed, this one included, and you'll have to head to Auld Reekie to be personally informed. A combination of technology and austerity, apparently, so it's good to hear the latter's all over and things can get back to how they were in the '70s, right kids?

In the interest of full disclosure, a couple of nights here have been arranged so the town and the river have already had a right good looking at. Those you can explore easily enough for yourselves and it's why Paths around Peebles is currently being flipped through.

What about west along the Tweed to pass below Neidpath Castle then under a Victorian viaduct? To the south, there are Iron Age hillforts up on Cademuir Hill but Glentress Forest is a little too far east and it's full of mountain bikers anyway. 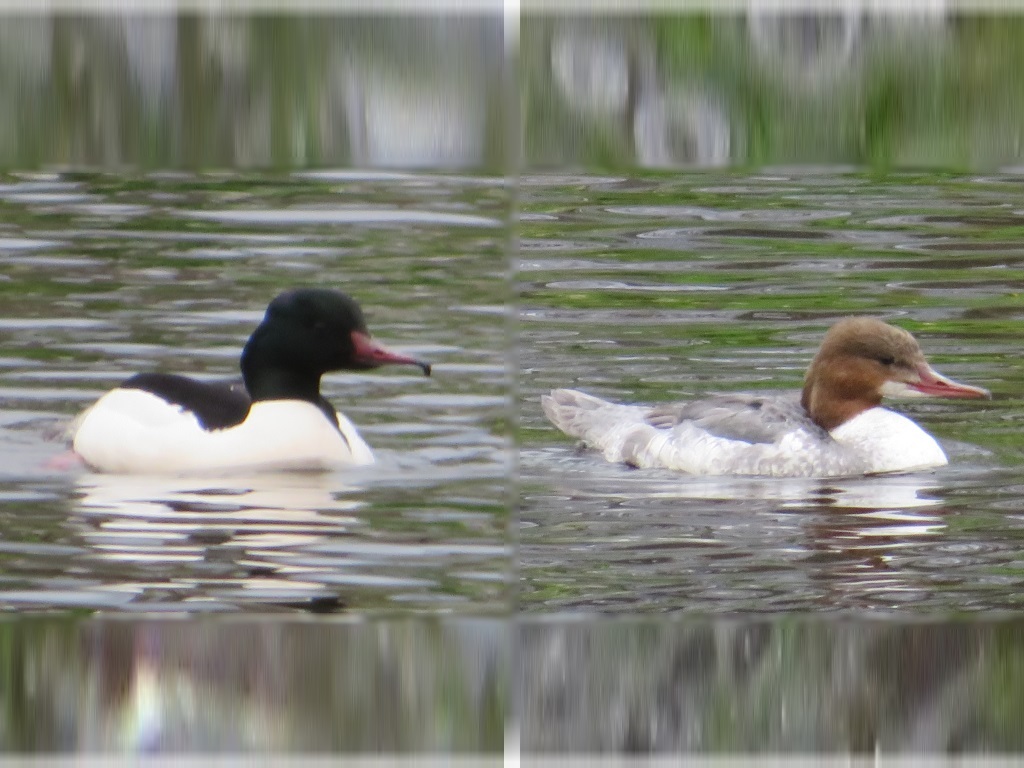 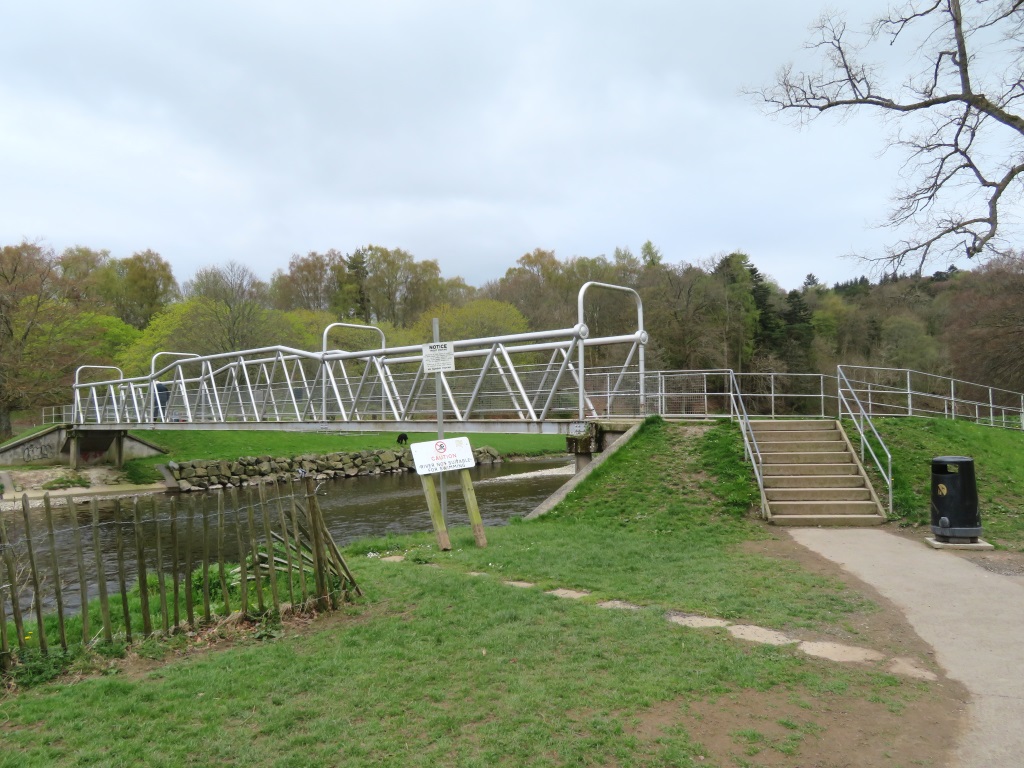 That just leaves north and the goosanders agree along the river path west to the bridge in Hay Lodge Park.

Head up and out to cross the A72 and follow the track to Jedderfield Farm having scoffed at some golfers. An elderly gent with a dog will soon fill you in on the history over the river at Cademuir and, no sir, you are definitely not boring us[1]. 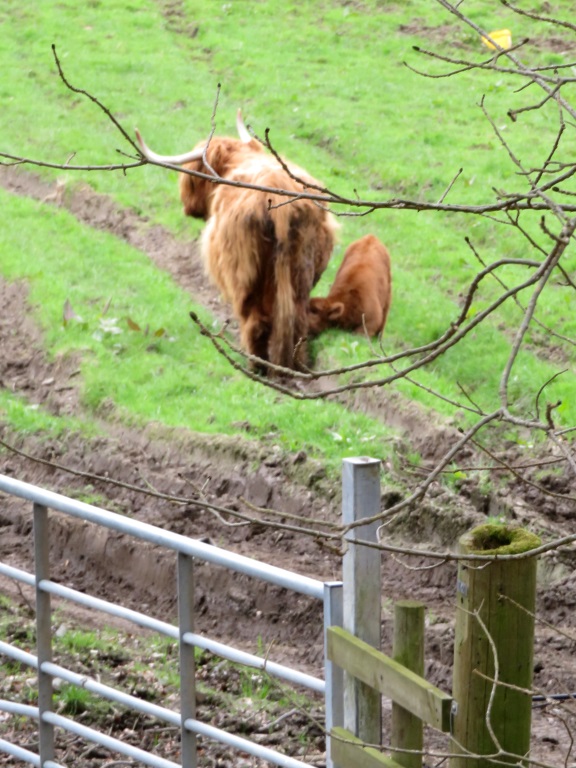 The way of the forts was an option but that's more of a full day out and there's no guarantee, that way, of a Highland coo and her calf.

[1] quite the opposite, actually.

'Hammy' Hill is the destination, which is just a 1200-foot hump with a transmitter on it, really. 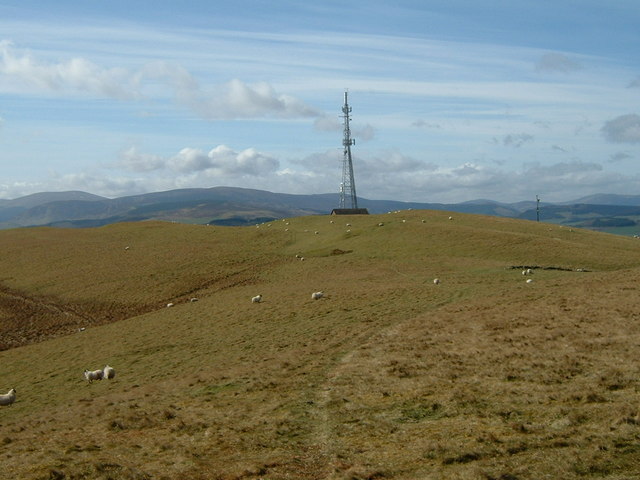 There is, not unreasonably, a reasonable view back down to Peebles, they say, but before that, you need to lose your bearings in the woods and before that more chit-chat.

At first, the shifty looking character looks like he's rolling a fag but it turns out he's playing with some double-sided sticky tape to leave in the boxes of nesting squirrels.

By examining the extracted hairs under a microscope, they can estimate the respective red vs. grey populations, you see, and of course one of his samples was misidentified.

It's thought he just loves doing that.

Any reds that are seen are promised to be reported online but they're giving everybody the brush-off today unlike this fella, the unmistakeable wheatear, male. 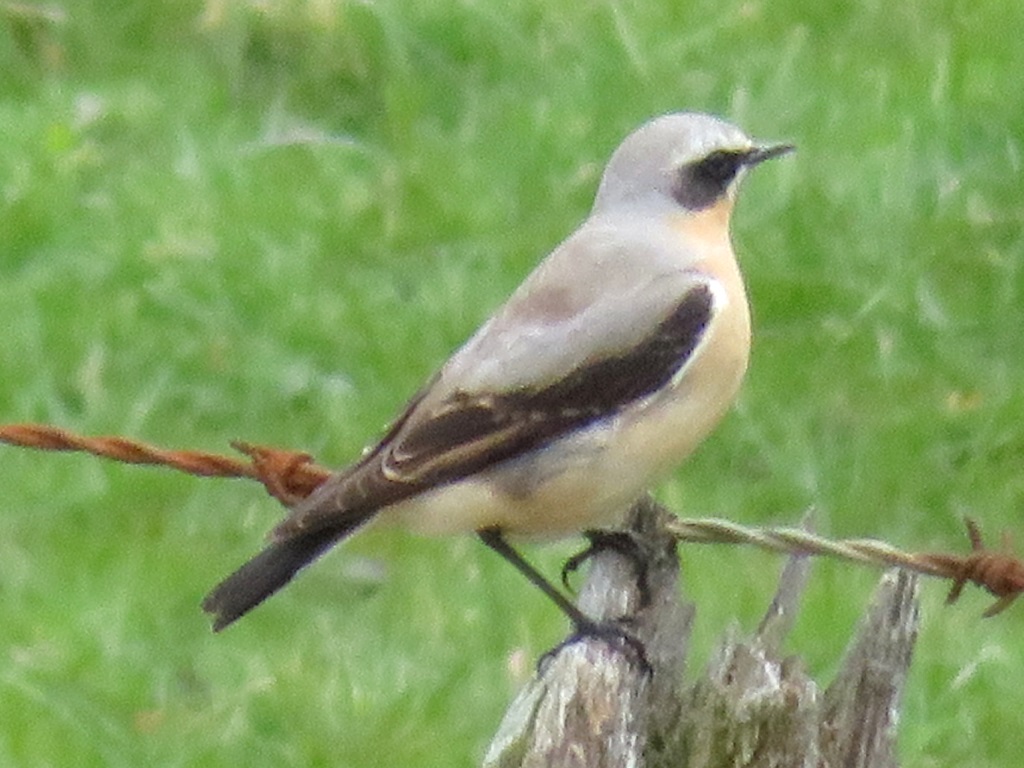 A first in the feather, so to speak, and this one gets a big tick, literally.

Although born in Perth, the famous author and statesman spent childhood holidays here and the museum in town can fill you in on that.

This walk west to Broughton takes his name and follows the paths used for centuries by droving folk. It's only 13 miles and can be done in a day so while it's hardly long-distance, you'll be doing considerably more than 39 Steps.

The marvellously named Standalone Way leads back down to Peebles where things are rather smart, residentially, and many of the lodgings display their date of birth. 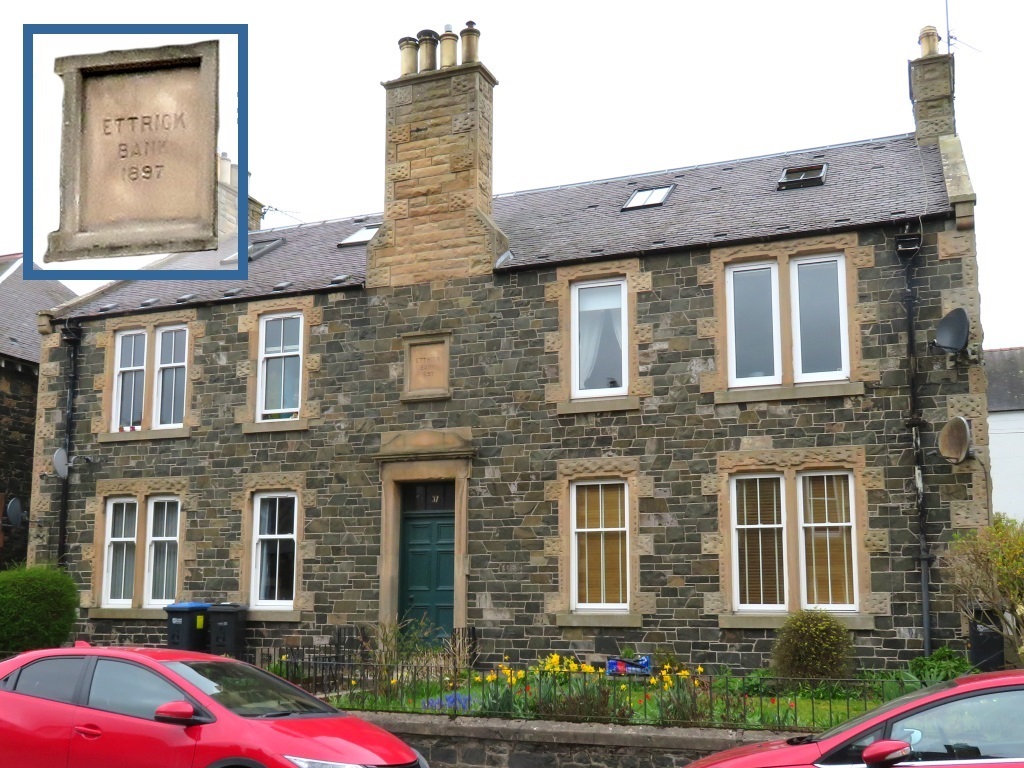 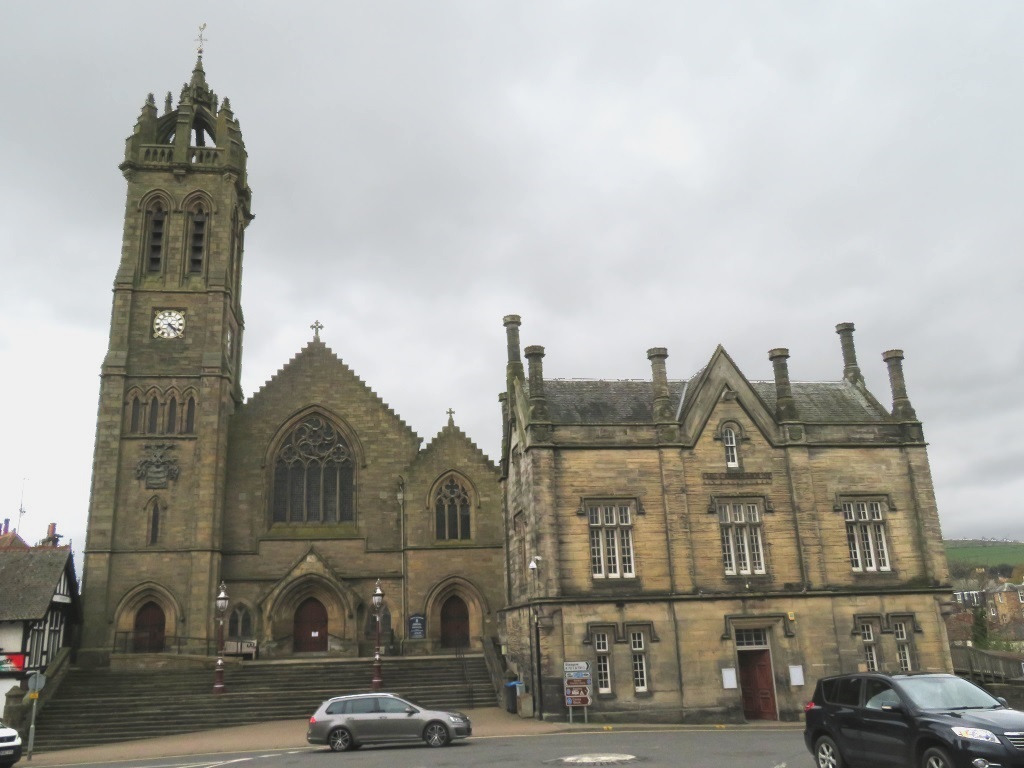 Church fact fans will instantly recognise the whopper at the end of the high street as classic neo-Gothic, late Victorian, possibly 1880s and what must be the old courthouse on the right?

None of this is nearly as old as the Cross Kirk, though, which is 13th-century old despite some rebuilding having been, and still being, necessary. 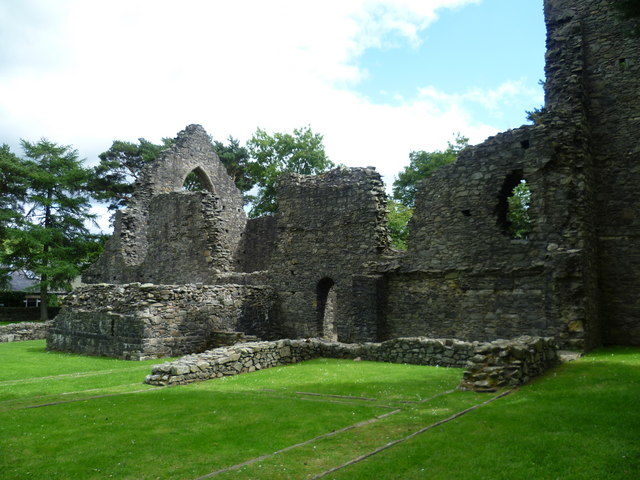 Neither is none of this of that much interest, honestly, they just happen to have been passed having just walked back in this way. It's time for another wander now and £2 for that copy of Paths around Peebles is proving to be a right bargain.

Proper old-skool Italian and no-frills fayre where the menu hasn't changed in the 20 years since they opened, probably. 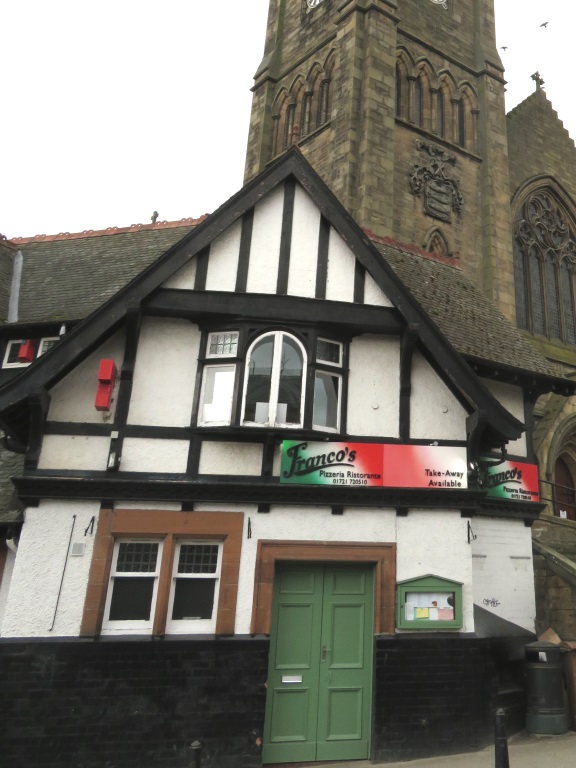 Right next to the big church but if you're having to wait for a table upstairs, settle on the Bridge Inn's elevated, outdoor seating or the cracking atmosphere inside.

The Prince of India (High Street)

Just the two nights here so the classic Italian-Indian combo it is. It's busy because Panna on Northgate is showing no evidence of actually still being open[1] and, should you be self-catering, advising trippers speak highly of the local takeaway.

[1] Nor opening anytime soon, neither, it's a Chinese now.

The railway used to run to what's now Sainsbury™s until so-called 'Dr'  Beeching reported for duty. 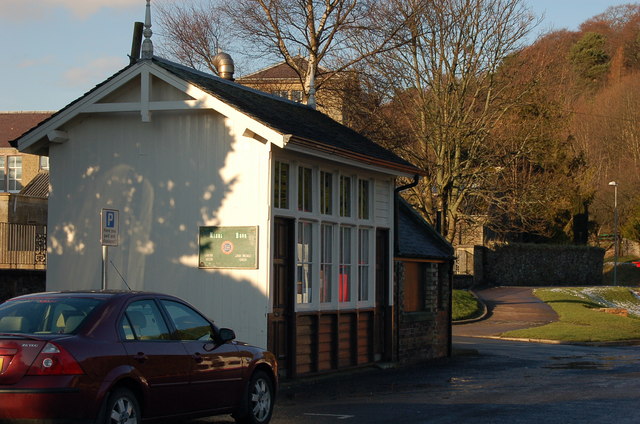 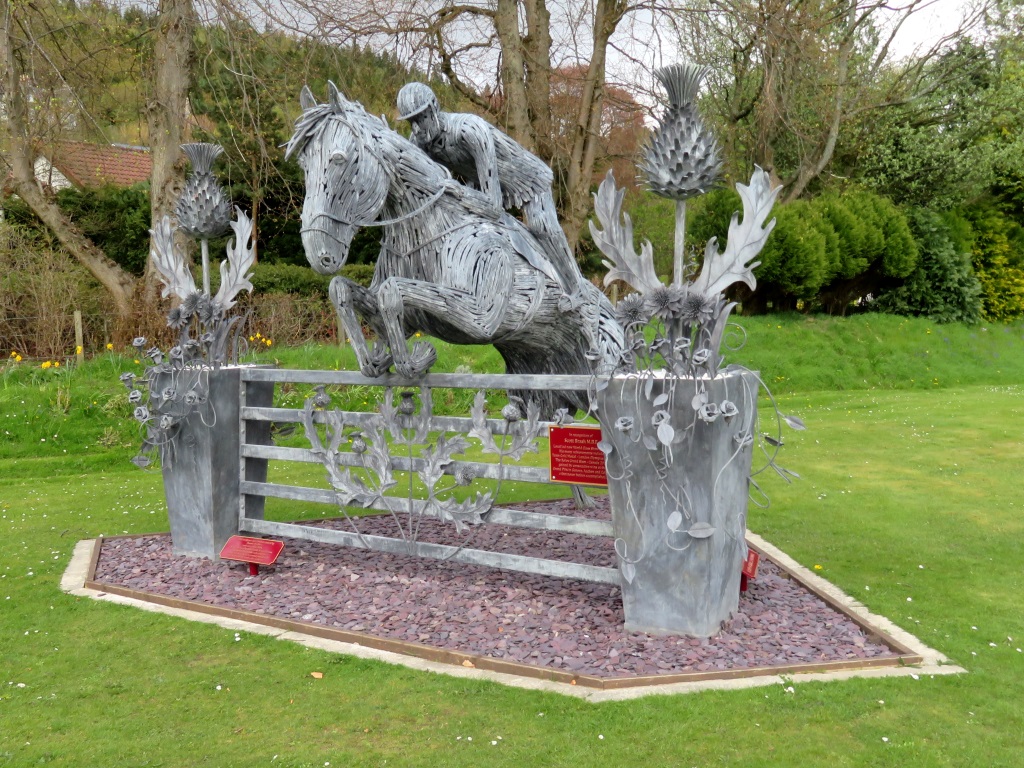 Just opposite is an imaginative piece of artwork that celebrates local lad Scott Brash's Show Jumping team gold at the 2012 London Olympics.

A horse would come in handy now since it's a little bit of a lug up towards Venlaw Hill Wood, an area of community, erm, woodland with a clear and fairly flat track to follow.

The howling hounds in the distance are from the Glenbield Boarding Kennels and if you're close enough to chuck them a biscuit then you've gone too far. You should have taken the steep descent down[1] to loop back via the other side of the valley passing some quirky accommodation. 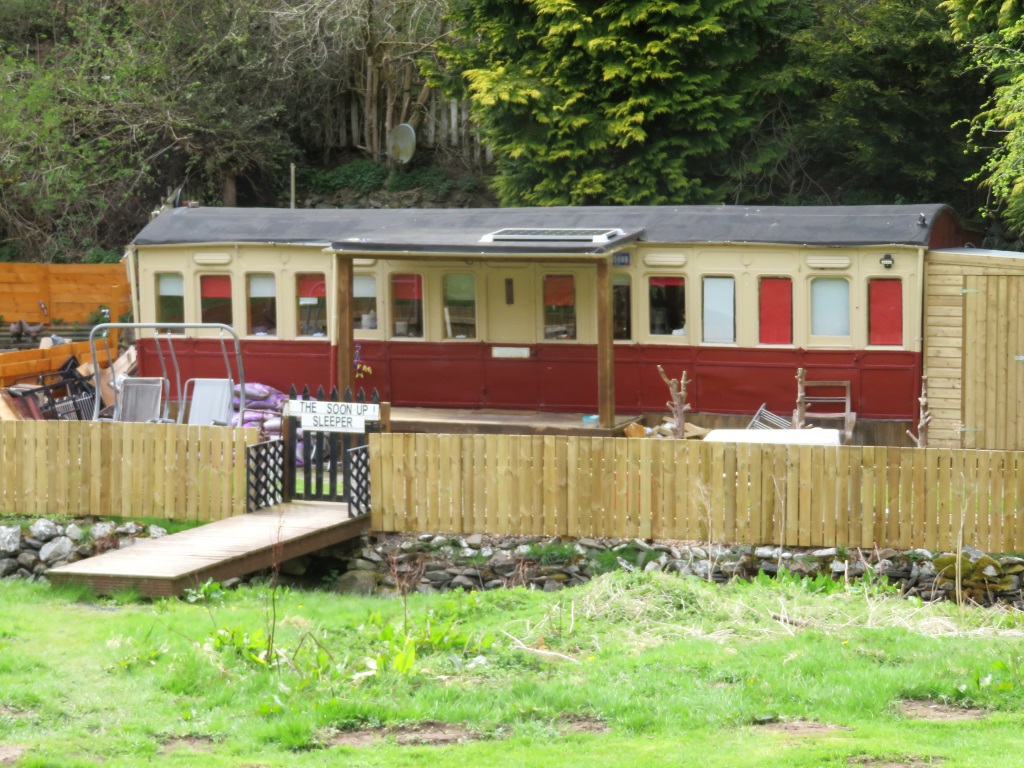 Some of these huts are more ramshackle than others but they're all very much off-grid and were built by wealthy landowners to provide a week away for the workers although they'd probably have preferred a pay rise or a lav that flushed.

[1] What? Not enough detail for you? Fork out £2 for a copy of Paths around Peebles then!

The way back to Peebles is by the old railway track although it's not thought the bridge is still strictly necessary. 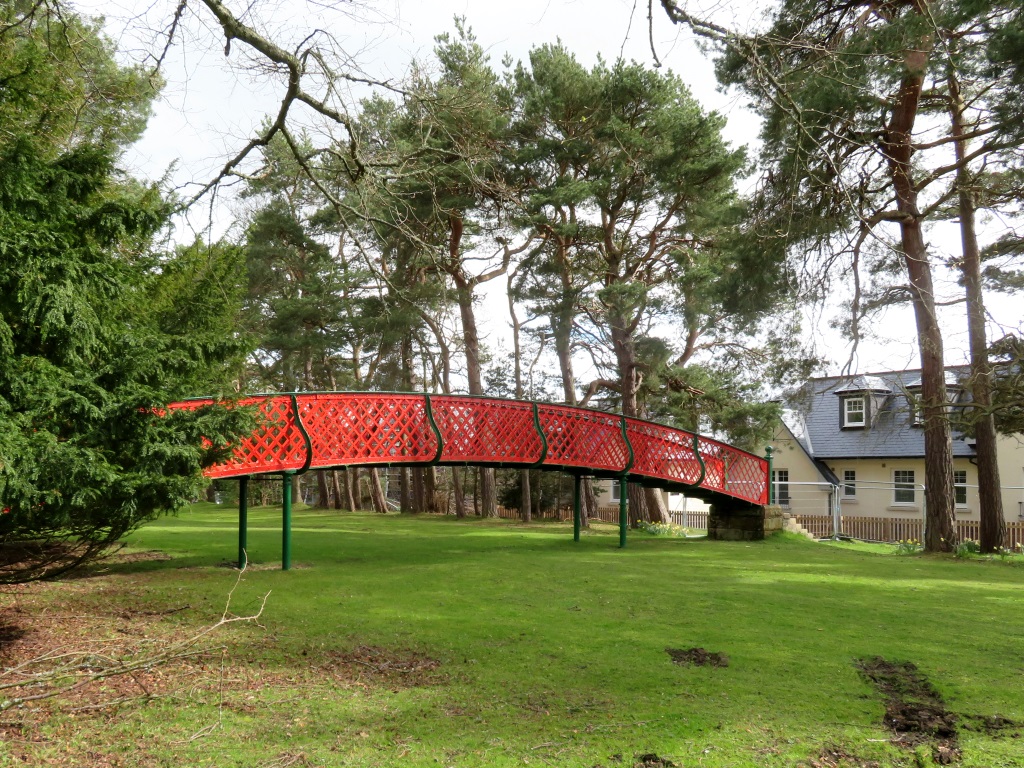 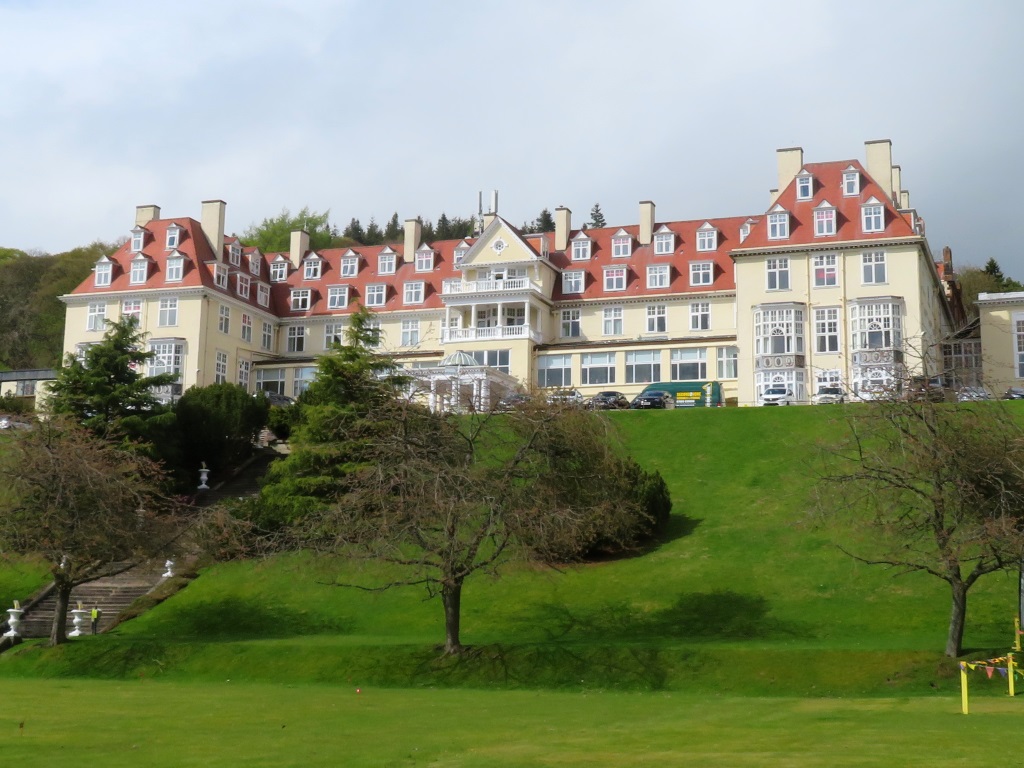 It's also along here where you'll find the Peebles Hydro and the original hotel did just that until it was realised that the benefits of hydrotherapy were, indeed, found to be stinking.

It now belongs to the same chain who run the one in Crieff but the fancy refurbishment is ongoing so advising trippers are still moaning.

Run by the same people behind the Peebles Hydro and they're working their way through the rooms here as well. Originally home to some old mill owner or other, you can't miss the vintage double-decker bus outside, obviously, and their initially baffling bakery is a nod to a very different kind of mill, maybe?

Alternative accommodation is provided at the Barony Castle Hotel, just under five miles north at Eddleston on the way to Edinburgh. It's where the Polish army had a World War II presence in Scotland with their officers trained in and around the requisitioned mansion.

Although based elsewhere, army sergeant Jan Tomasik extended his UK stay post-1945 and ended up buying the place in the '60s but why a 2,000m² relief map of Scotland in the grounds? 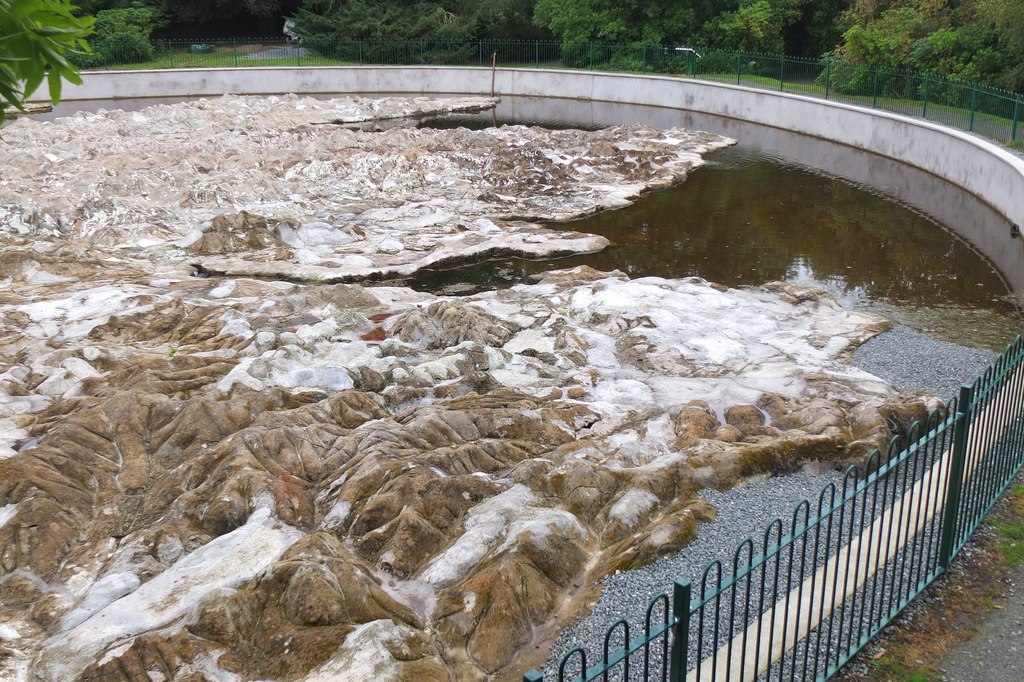 Seems he'd just seen one similar in Belgium and with the help of some academics from Krakow, the largest construction of its kind was completed in 1979. It never really did bring in the tourists, as intended, and suffered over 20 years of frostbite until a charity-run restoration finally finished in April 2018.

This is all known having also been billeted at the Barony several years ago but a far cheaper option would just have been page 32 of Paths around Peebles although that doesn't mention the alpacas.

Peebles hasn't been ignored deliberately, it's just some value needed to be extracted from a, now tatty, copy of Paths around Peebles.

That's why there's been no mention, as yet, of the, erm, White Stone, a random lump of quartz on the way back in that marks the boundary of the burgh and even gets a 1462 mention. 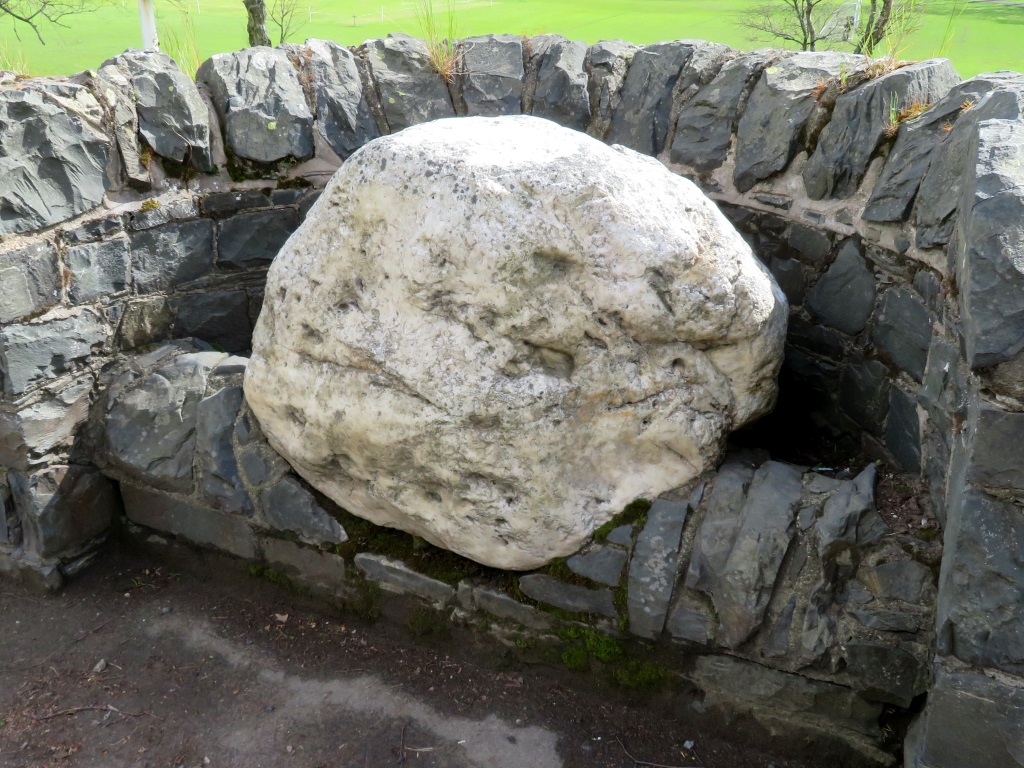 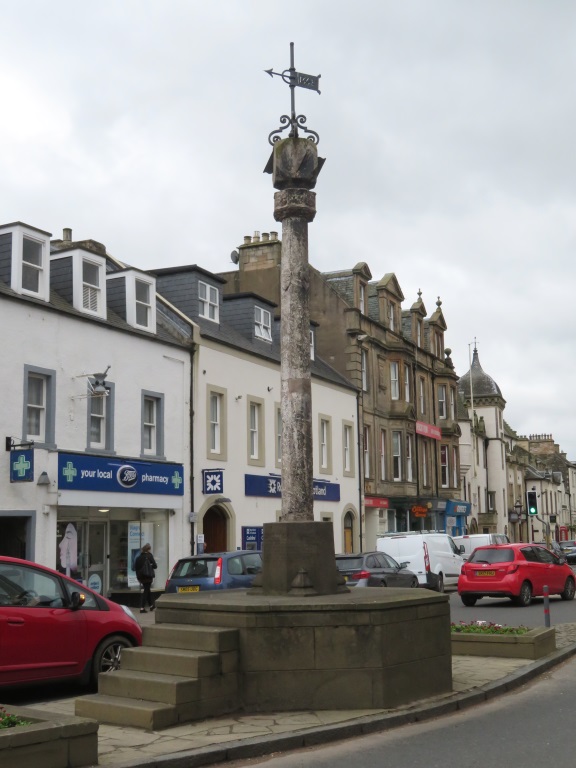 Nor a mention, neither, of the Mercat Cross, the symbolic centre of a Scottish market town although this one's more 1662. Over 350 years old eh? That's quite a piece of work what with no modern, state of the art, stone cutting equipment back then.

Peebles' fanciest sustenance provider, probably, with head chef-owner Ally McGrath a contestant on BBC's Great British Menu, no less. They've been turning them away ever since, SlyBob included, which is a shame because rabbit and pickled beets served in a cigar box is right up our street.

The woolly mills flourished in the 19th century and after the railways came, well, two words... boomtown! 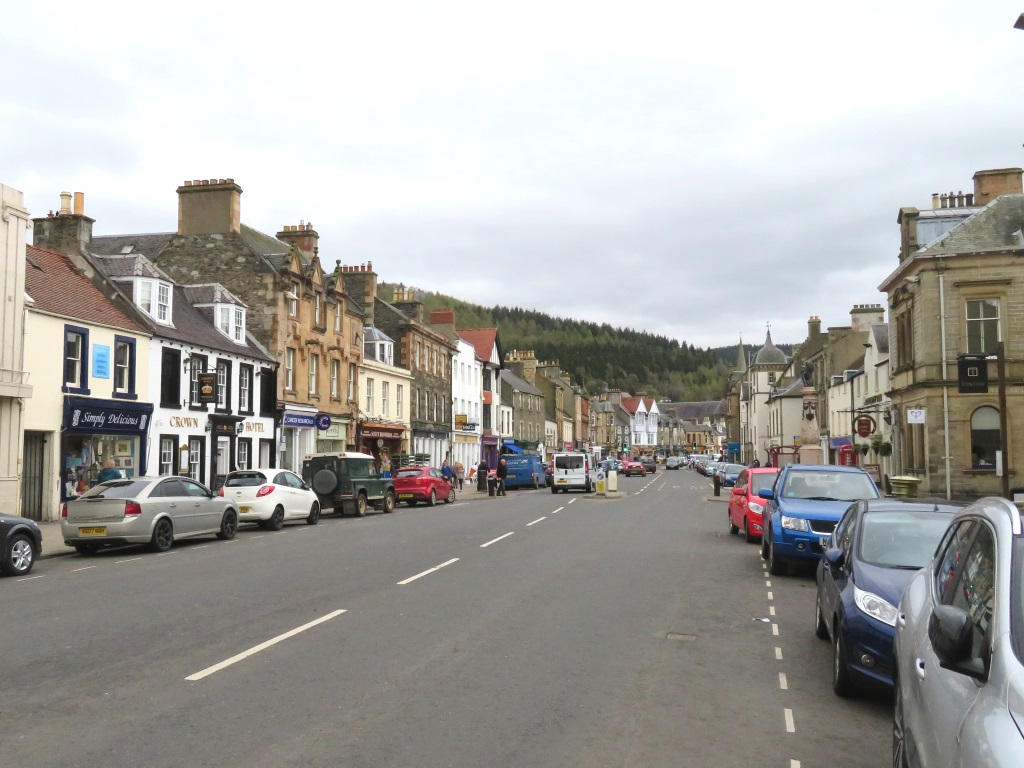 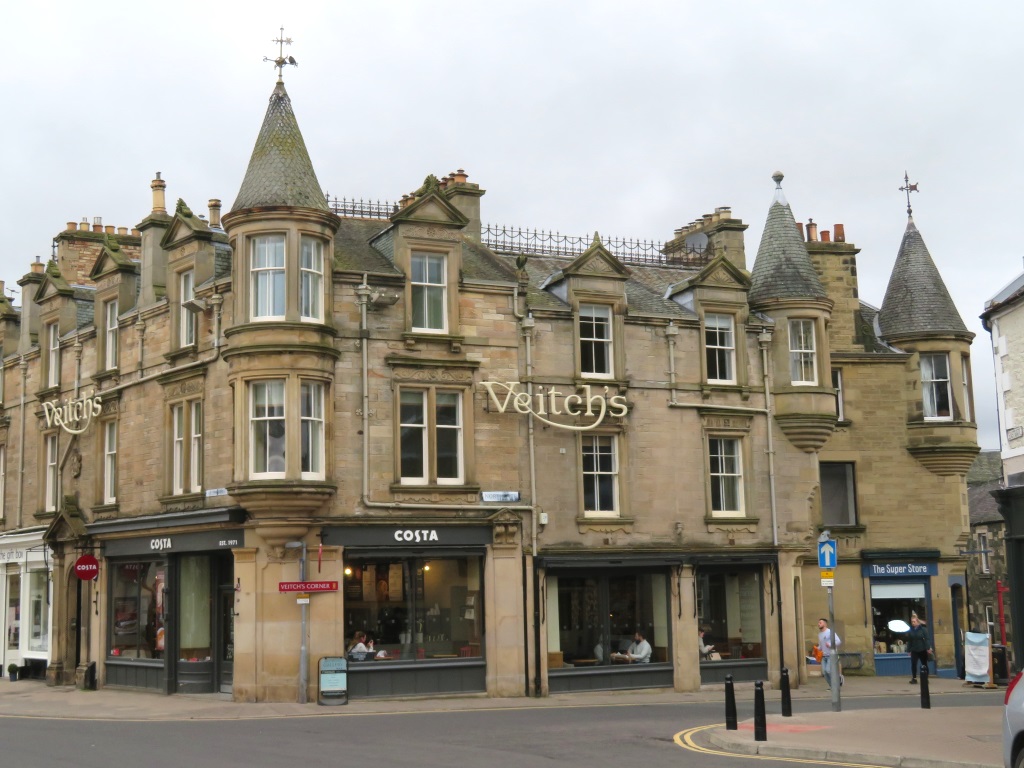 That means this gentleman's looking forward to getting outfitted at Veitch's who've been doing just that since the 1880s.

They're still doing caps and chinos, sort of, it's a Costa™s now and the objectors were foaming at the mouth when they invaded in 2008, it's said.

[1] Hebden Bridge since you ask.

It's the last night before a big revamp but they're not giving any of their Belhaven™ away. Not exactly regulars but certainly no strangers to the pub quiz, here's a new one, the 'wipeout' round. Don't know the answer? Leave it blank, then, since a single wrong scribble sees nul points at this point.

That's the reason SlyBob are going home without any winnings. Who knew Mount Elbert was the highest point in the Rockies and not the Appalachians?

More than half of the other teams, actually.

A courtyard, of sorts, leads left off the high street and down to the river for the footbridge back over to the car park. It's still being wondered, however, back in the 17th century and without today's technology, just exactly how do you make a Mercat Cross?

Stamp on his foot then pour boiling water down his burrow.