The gas is running low and what little is left can be heard sloshing about on the rollercoaster ride in that is the A379[1] and the steep drop down to the River Dart and just about the mouth.

Famous, of course, for the Britannia Royal Naval College, the Royal Navy's centre for starting officers off on their training and passed on your left on the way in, probably. Many of the major royals have attended to learn how to be, on top of already being posh, authoritative on the water. That doesn't include the theatrical one although, to be fair, he did give the Royal Marines a brief go.

It does, however, include a fresh, young, Greek prince and this is where he first got the glad eye for a visiting Lizzie, it's said.

That's a joke, of course, and while James Watt often gets the credit, local lad Thomas Newcomen can lay claim. Ironmongery was his main business but, in between some preaching, he also did a bit of inventing on the side and was up and puffing by 1712. The tin mines around these parts were prone to flooding, you see, and his steam-powered pistons provided the pumps for down the pits.

Watt would go on to add a separate condenser, obviously, but not for another 60 years and Newcomen's original is on display in an outhouse next to the car park. It's actually part of a visitor centre and while every other piece of old, operating machinery in the UK will make some kind of similar claim[1], this is the oldest, surviving one in the world, they say.

It would be nice to have a steam-powered engine because there's plenty of water here but no sign yet of any all hands to the petrol pumps.

[1] The widest flywheel in the West Midlands, for example.

The centre leads into the Royal Avenue Gardens and they've packed quite a bit into what's no more than a funny-shaped football pitch, area-wise. The ornate, Italian marble statue was donated by a local philanthropist in 1950 and the fountain some 60-odd years earlier to reward Queen Victoria for some golden work, jubilee-wise. There's another memorial to a local Dartmouth lad, Private Theodore Veale, who was awarded the Victoria Cross after the Battle of the Somme. Veale rescued a Lt Eric Savill by dashing in and out of no man's land, several times, waving just a flimsy pistol and the Bosche didn't like that one bit.

Savill survived and went on to become Deputy Ranger at Windsor Great Park and himself was knighted, King George VI suitably impressed with his green fingeredness[1]. Veale's heroics are remembered in a small area here with a plaque and some of Savill's magnolias, which have made their way from Windsor.

The recommended route to Windsor is 214 miles and, based on today's gauge, it might be pushing it to make it to Windsor Road on the way to Sainsbury™s.

The park abuts a rather marvellous riverside promenade, technically an estuary, and the brightly coloured booths are pushing boat trips as the main attraction. Some head over to Greenway, Agatha Christie's holiday home, no less, which is where she used to relax 'in-between books' and everybody knows how challenging that constant churning out can be, eh?

The gardens are part of the attraction but the first flower needing navigation is the river by ferry or canoe for the more adventurous. You have to ring ahead to arrange for parking, you see, so somebody has committed a crime but it's already known who-what-dunnit...

The National Trust™! They charge north of £20 a pair and more if you go with the parking.

Fortified fun for all the family down at the late-14th-century castle that's largely still intact. It's described as 'One of the most beautifully located fortresses in England.' but that is by English Heritage™ and something this fully paid up pair didn't know at the time.

That means it remained inexplicably unexplored and an unforgivable failure to recoup some of that capital outlay since being so beguiled by Belsay. It's only about a mile south of town so you won't necessarily be needing a car with at least a little petrol in it.

Not so much a small harbour, more of a 'boat float', apparently, and while that's the usual way in, anywhere, here it's a tunnel below the road. That makes for nothing too tall to obscure the fine buildings that line two sides and hint at Dartmouth's significance.

Defensively less impressive and a couple-of-hundred years younger than the castle so English Heritage™ don't even charge. If they did, that would have definitely been a profit-tipping opportunity rather than settling for just a glimpse of it down the quay.

An important port going back to the Crusades, a pilgrim-packed Mayflower set sail from here in 1620...

'United States of America? Aye, straight on mate, turn right, keep going and after a couple of months you can't miss it.' They say they set sail but they were really only here because the sister ship sprung a leak leaving Southampton.

The same thing happened leaving Dartmouth and they limped into Plymouth, which is just around the headland. Plymouth is where the US leg of their journey properly started but the commemorative plaque doesn't tell you that.

Plymouth? With this nigh-empty tank? If only it ran on gin, now there's a resource that rarely runs dry.

Had Horatio Nelson trained at the Naval College, he'd have had his good eye on the magnificent buildings in town even though he'd yet to lose the other one. No clues as to any former function or why the fancy frontage but it's thought this might be mocking, Tudor-wise.

Some of the medieval does remain but it's worryingly wonky in parts. Much of the centre sits on the reclaimed mudflats of the estuary, you see, with just the hint of a hump and St Saviour's Church. 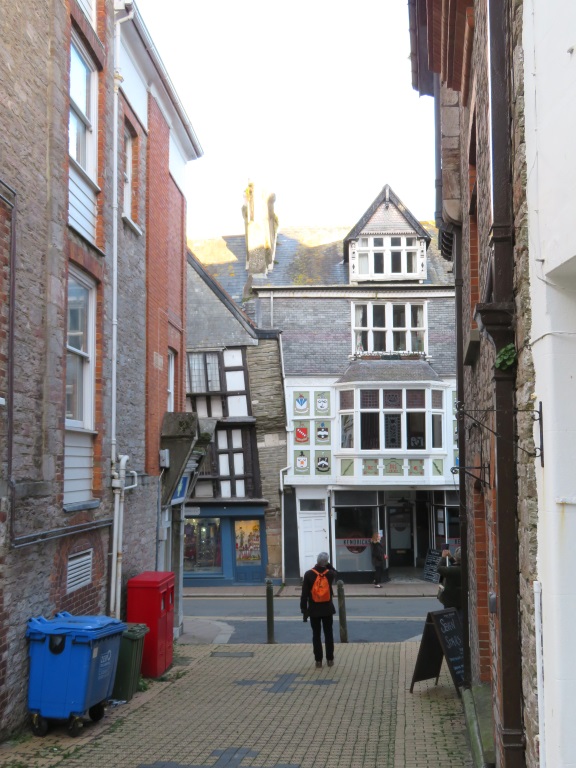 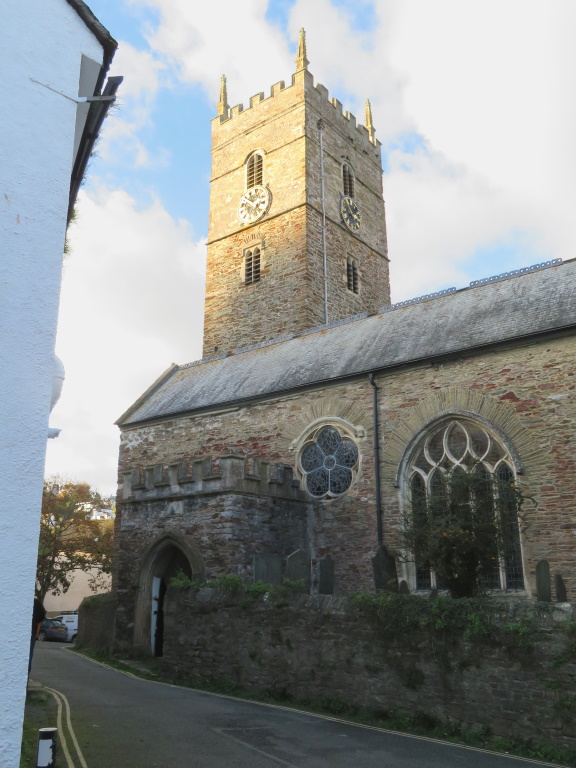 Consecrated in the 14th century, that makes it older than the Taj Mahal, say, whose menu looks to date it around 1975. There is no Dartmouth University, of course, the fictional setting cleverly bringing some backstory to the central pairing's continuing underachievements unless the writers were obscurely referencing Dartmouth University in New Hampshire, USA, which existed briefly in the early 1800s in an attempt to acquire public university status?

Whatever the whyfors, this is one of the better episodes because it's got Super Hans in it.

Just the two main streets, really, running off at right angles from the 'boat float' before things head uphill into the residential. It's a day-tripper's delight and the sort of place to stock up on some chandlery, something else you've run low on recently, eh?

Highlights are largely historic-looking but since they don't do pies or old football stickers or unleaded petrol, Gifts for Gentlemen was, quite frankly, a bit of a disappointment. If you're walking England's longest National Trail anticlockwise from Minehead then well done, you're about 470 miles in so just the 160-or-so to go to Dorset. If you're coming from Dorset then it's still about 470 miles to Minehead.

There's another ferry for those on foot that actually qualifies as part of the path. It's either that or 10 miles upriver to the first bridge at Totnes, which would be crazy but no more crazy than Totnes itself.

The hill come in on might not be made back up thinking isn't that the bad one for a near-dry tank? The technology reports some pumps near Brixham but that's on the other side of the River Dart and if only there was some way across with the wheels?

Of course there is, of course, by ferry and there are two, actually, Dartmouth Lower and Upper, which both take you over to Kingswear. One is council-run, the other is privately operated. One will have you having to navigate Kingswear's narrow streets on the other side, the other to a more accessible A road. One is 60p cheaper than the other so the council-run, inconvenient, Lower one it is then.

You need to queue, engines off, thankfully, but because of the way the one-way system twists, there's no idea of how many ahead of you or even how many it takes at a time.

Eight as it happens, on not so much a ferry but more of a pontoon, and something comes from somewhere and clamps itself on to pull you across, somehow. For this pair of landlubbers, it's a right adventure and a potentially troublesome situation but these guys could do it with their eyes shut. As will you for a couple of seconds at the sound and the shudder when that clamp bites.

Advising trippers, rather randomly, give this experience an 82% rating for five stars but what's really required here is some four-star.