Grasslands, cliff and shoreline with a monumental backdrop.

It's a clifftop country park, alright, and you get at it via the village of the same name, just off the A299 as it picks up pace out of Margate. Parking is by a small Visitor Centre, by the meter, buying time for a clifftop and an I Clavdivs-era construction.

A pair of binoculars will come in handy and not just for the whistling wildlife. Margate sits glistening in the distance but there's something much less familiar on the horizon.

If you're that way inclined, a clifftop path leads up and away to the left. It's largely on this type of terrain with evidence of the Great Thanet Faultline, which might make this all slip to the beach. 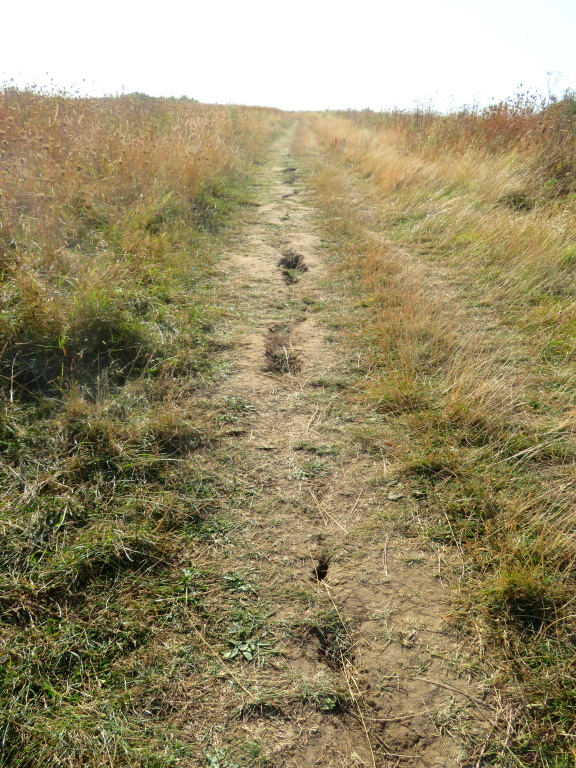 That's a joke, of course, just evidence of a drier-than-usual summer that's caused the earth to crack and turned the grass to straw. That'll soon be put right by a wetter-than-usual winter, which might make this all slip to the beach.

It's about a mile to the start of, what's just about, Herne Bay and, with a bit of elevation gained, a rather marvellous view is revealed. None of this could really be captured by camera so this is where the binocs are beneficial and look!

Ignoring the tankers on their way to Tilbury, there's Essex over there although no sign of Southend and the longest pier in the world, no less. The wind farm is likely to be Kentish Flats but pan right, pan right, keep going, stop!

A fella walking his dog isn't sure, neither, but is that? Are they? Surely not?

Remember the Little Swotty Kids' Book of Facts and Stuff and something about Maunsell Forts within the well-flicked leaves? Well, it's finally known where they are now, focused off the North Kent coast, as it happens, somewhere in the Thames Estuary. 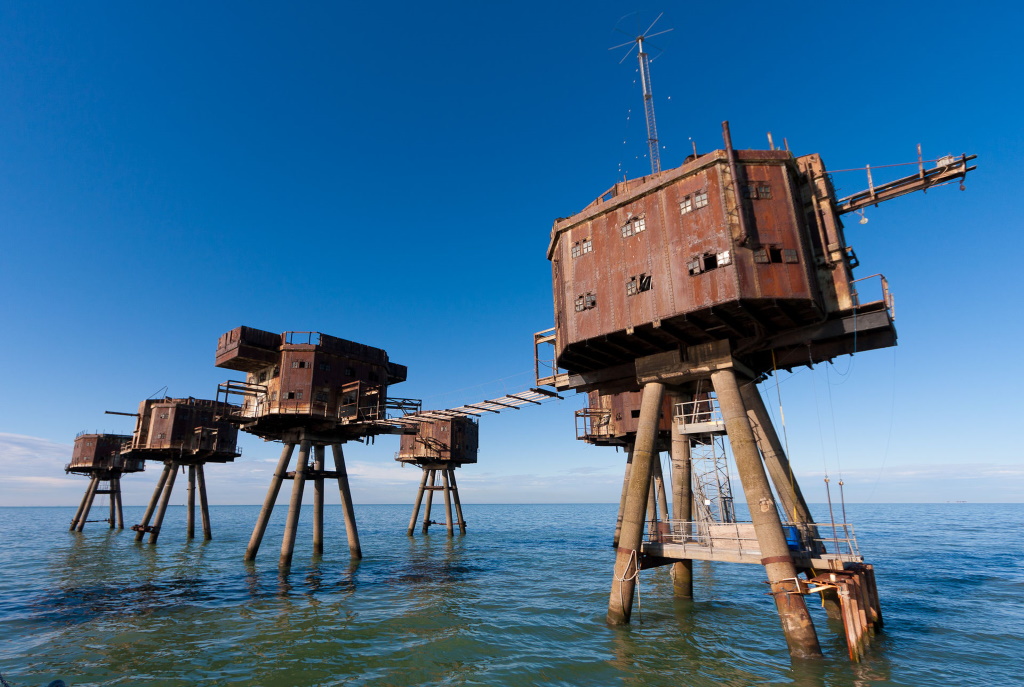 These defensive structures are more War of the Worlds than World War II and it's suspected these are the ones at Red Sands. Screaming Lord Sutch, no less, thought this as good a place as any for a pirate radio station before he soon became bored with that deciding to concentrate, instead, on serious, political reform.

Abandoned in the '50s and wishing to distance himself from their legacy as a nuisance to shipping, the engineer Guy Maunsell went and dropped a 'u' and concentrated on helping his son, Nigel, to drive faster than is normally necessary.

Meanwhile, back near Reculver, it's back the way you came only this time something much older tempts in the distance. The remains are of the 7th-century monastery of St Mary's with some of the bottom bits unmistakably Roman.

Reculver, or Regulbium, is a clue although they nicked that from the Celts suggesting an even older settlement of some significance.

That was before the Wantsum Channel went and silted up, though, and by the beginning of the 16th century, the Isle of Thanet was nothing more than a name.

There's still plenty of St Mary's left although not quite so much of it round the back[1]. 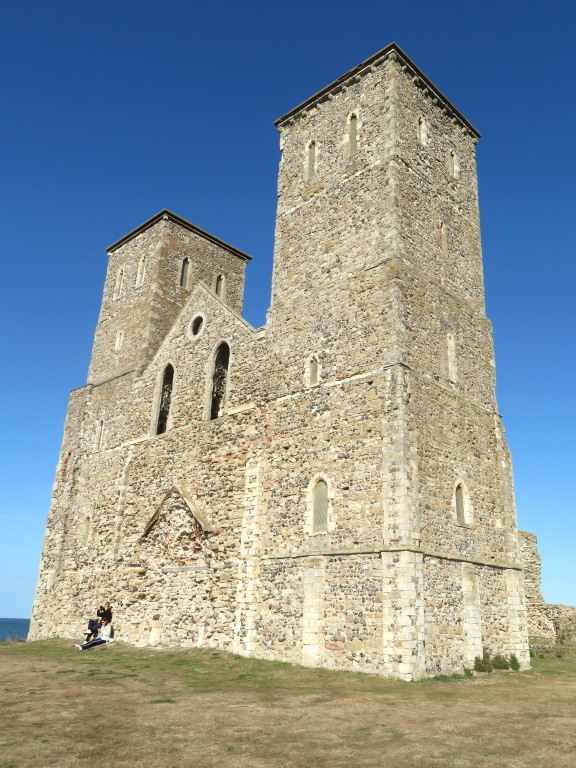 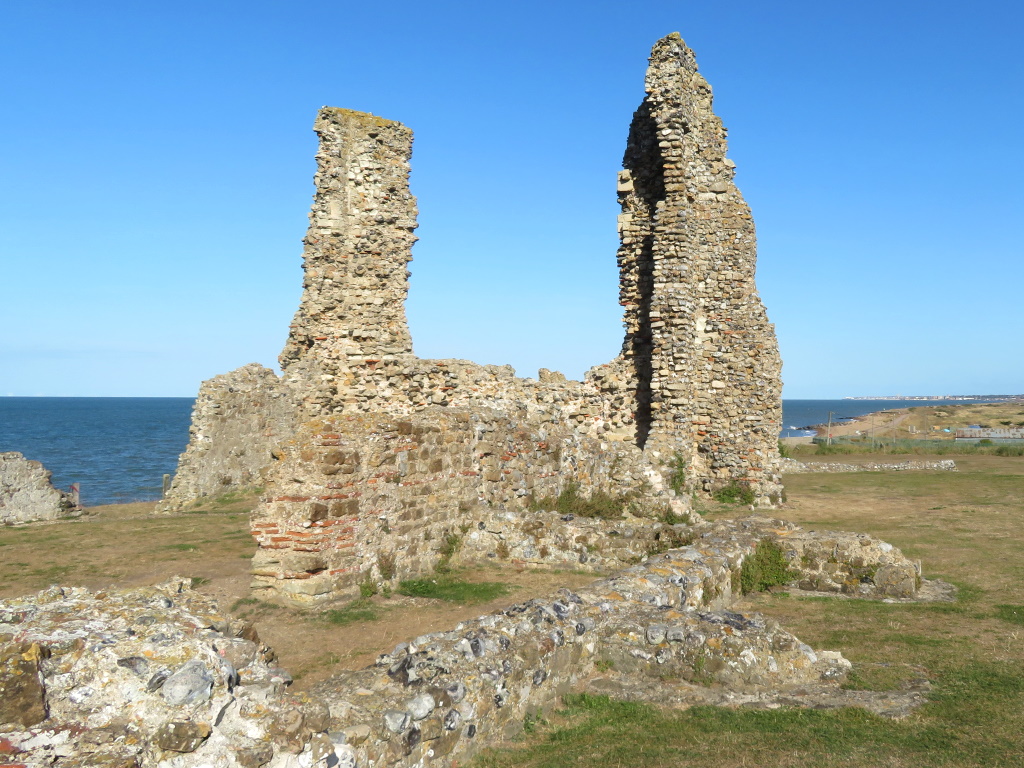 There may soon be even less of it with ongoing erosion the issue and the previously passed promenade is concrete evidence of that. 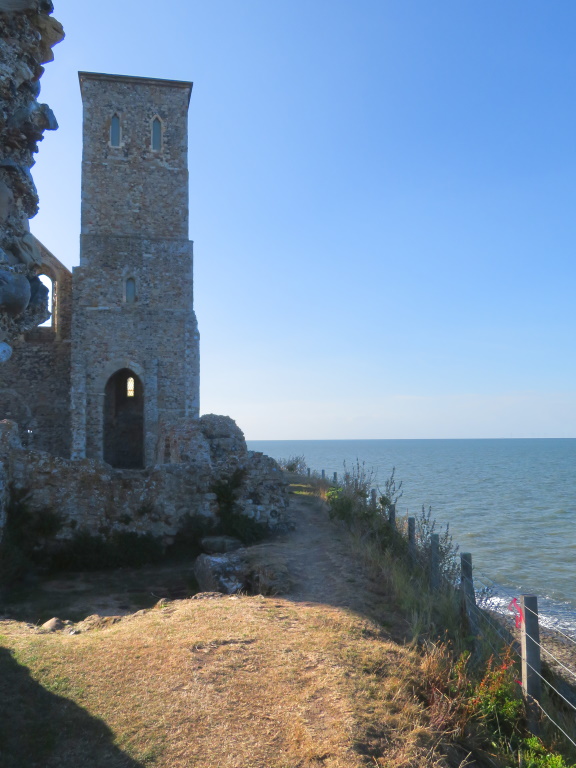 That means English Heritage™ don't, sorry can't, charge for an up-close encounter so SlyBob are no further forward to getting back into 'profit' today.

[1] More than made up for with a blurry view of Margate.

Refreshments are restricted to a café next the car park or the marvellously named King Ethelbert Inn. Quite the progressive was old Æthelberht, kickstarting the Anglo-Saxons' conversion to Christianity in Kent and forging friendly relations with the French, right kids?

They're a progressive bunch here, as well, pushing local ales on the pumps and it's somewhere you can get a Sunday Dinner after 3 PM!

Today's location provides a stretch of the Saxon Shore Way[1], a 160-mile clockwise canter round Kent until it halts in Hastings after East Sussex makes an appearance.

The path actually avoids Margate and cuts south to follow some of the reclaimed land of what was once the Wantsum Channel. The local language, however, proudly preserves the sense of detachment previously provided by the geography and can still be heard in many of the coastal settlements of North Kent...

[1] Confusingly called the Oyster Bay Trail if you happen to be on a bike.