The road in doesn't actually come from Luton, that's just a local one that happens to be handy for the Hatters. This afternoon also makes for a game of two halves with not much action in the first and the second running slightly over.

It'll include a half time orange, juice, but no penalties, parking-wise. That'll be behind a Barclay™s, initially, before a trip up the road that nearly beats 1966, history-wise. 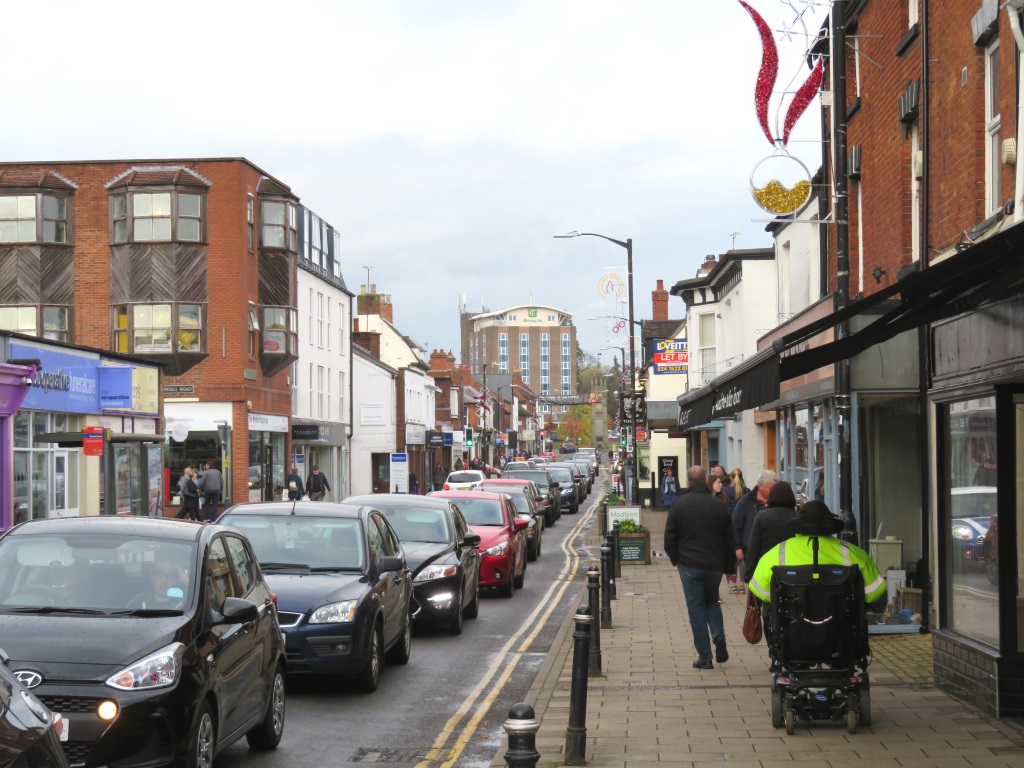 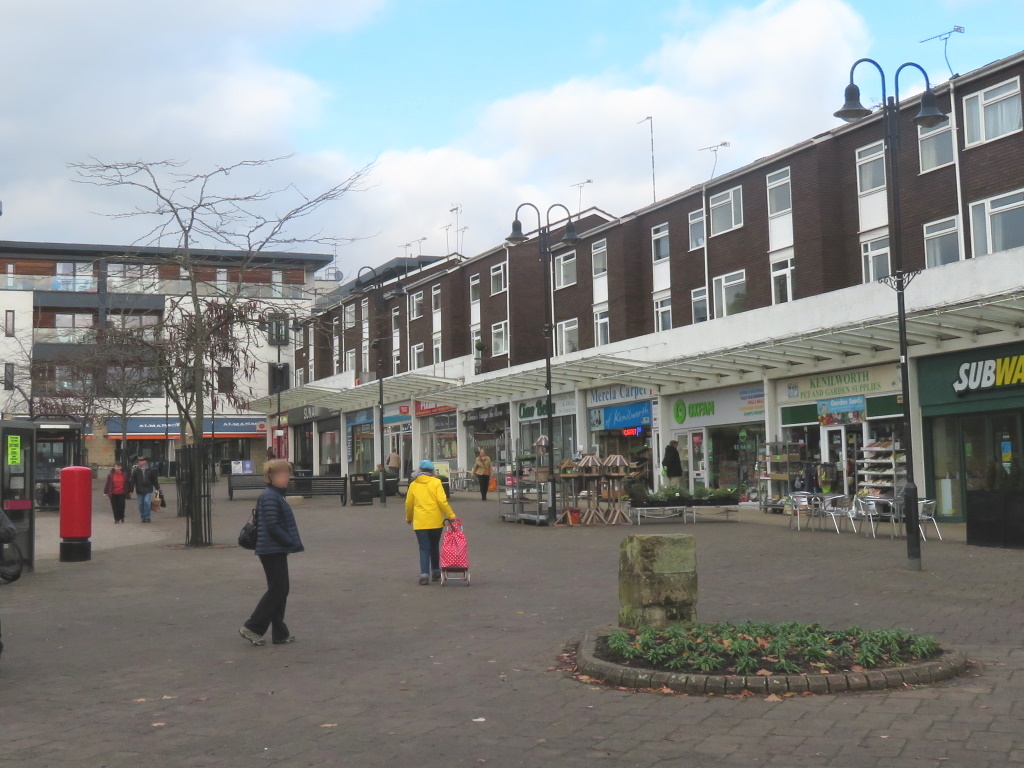 It does have its own distinct feel, though, due, no doubt to there being nothing much taller than two floors here, including the more modern marketplace.

That includes the clock tower and no, not one of the many in the UK to celebrate some golden or diamond work by Queen Victoria, jubilee-wise. This one was 'gifted' to the town by a local benefactor, in memory of his wife, and narrowly avoided going all hands-free during the Blitz. 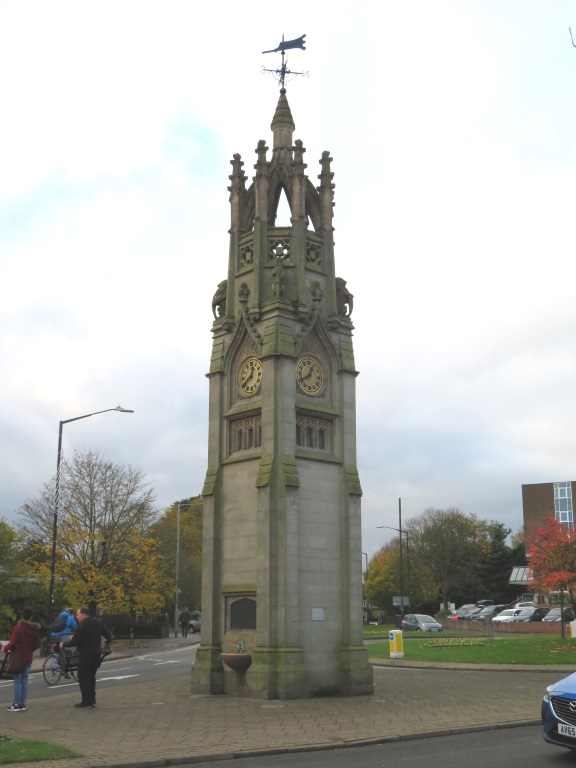 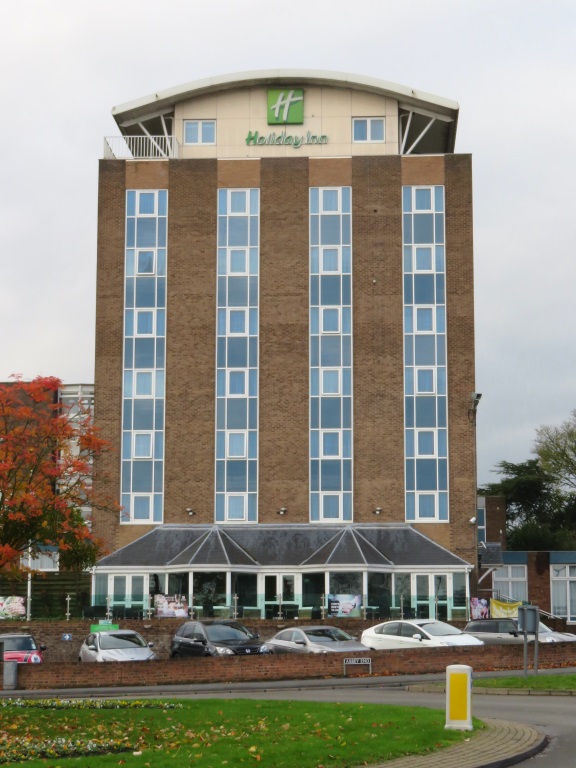 While that could hardly be described as a tall story, neither, the Holiday Inn™ skyscraper can be and it's the reason why you are here, probably.

A wedding, perhaps, or a bar mitzvah, maybe, or god forbid, a team-building day and everyone remembers how much fun they were, eh?

It's all English Heritage™'s fault that SlyBob are here. Remember when you signed up for that annual membership last summer having been so beguiled by Belsay?

Well, ever since then, and wherever it happens to be, there's a 30-mile search for anything remotely attractive in an attempt to get back into profit from that initial capital outlay. It's a false economy, of course, but Kenilworth Castle is a £25-a-pair saving so stick that in your spreadsheet[1].

It's walkable from town but it wasn't once all fields round here as can be seen today. No, entrance to the castle grounds is over an ' earthen dam' that created a defensive lake and it was all water to the horizon, they say. 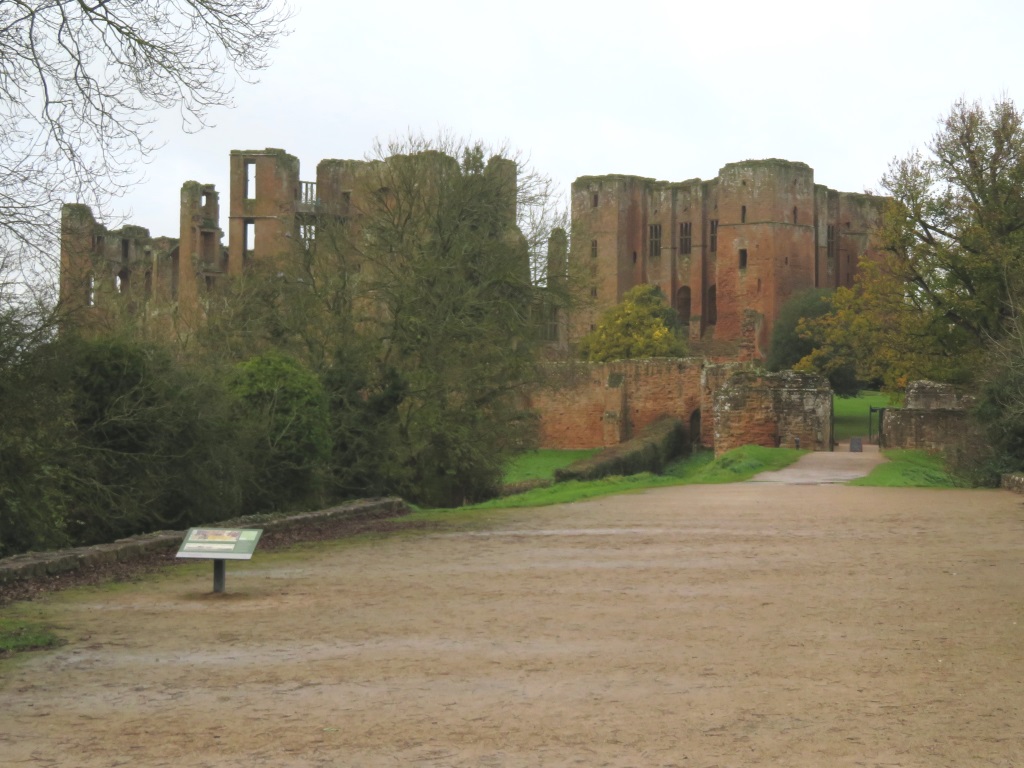 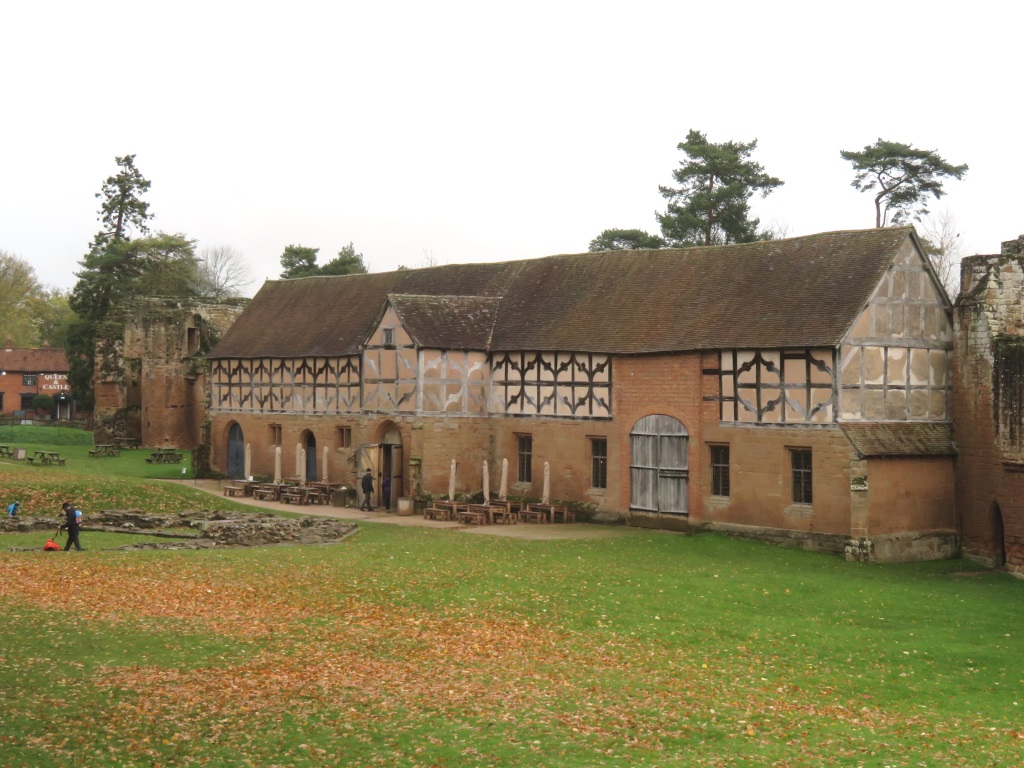 There's a chilling experience in the old stable block that's home to a draughty café and an informational display to warm you up, history-wise. If you're a fan of the past, this is one of the big hitters but only if Queen Elizabeth gets you all excited.

Not the one that can be normally found on a stamp but Lizzie I although philatelists might remind you of the 'Kings & Queens (2nd series.) The House of Tudor' set that was published in April 2009.

Robert Dudley, 1st Earl of Leicester was a childhood friend of Queen Elizabeth I well before they both went on to spend some separate time in the Tower of London. On finally getting her crown, Dudley was rewarded for his loyalty with an executive position behind the Queen's scenes and then, a little later, with Kenilworth Castle[1]. 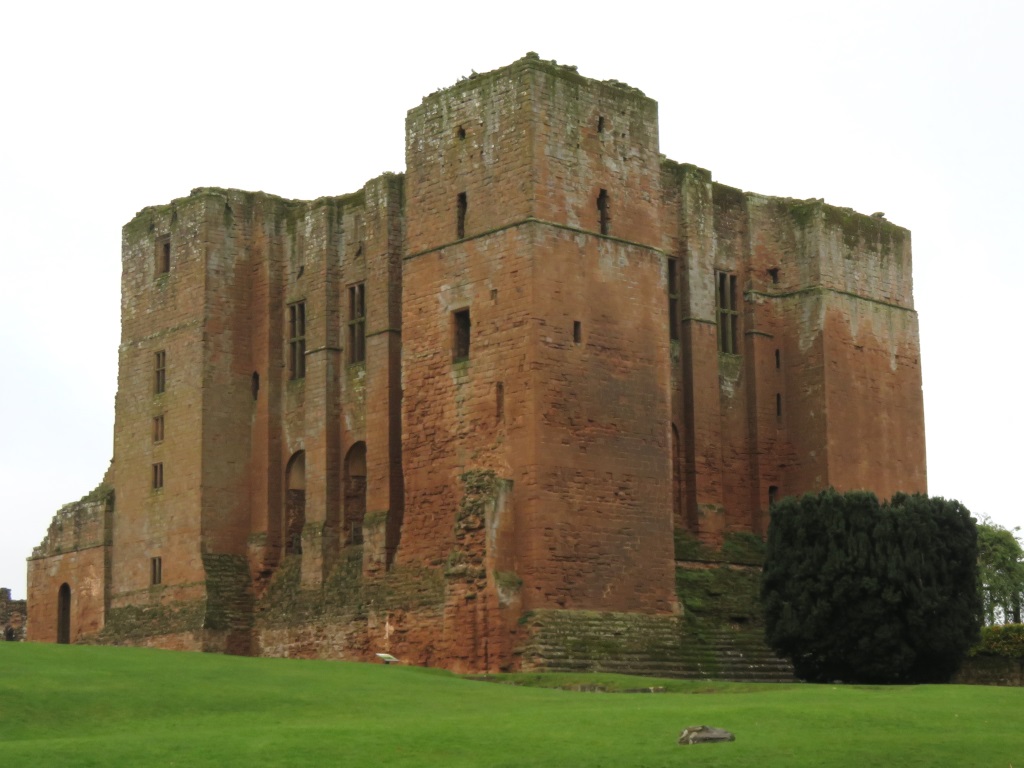 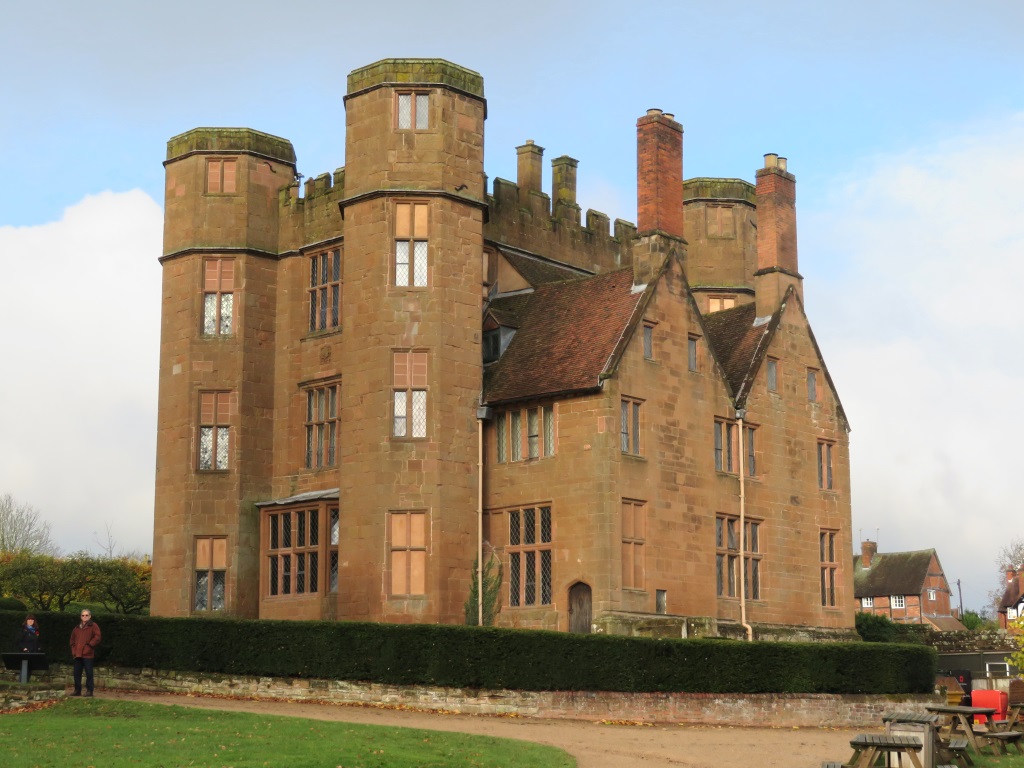 It took him 10 years but he built a new gatehouse for no other reason than to show off, really, and none more so than to Good Queen Bess herself. Rumours were rife, you see, that he'd copped her in all her Gloriana with the king of Spain, no less, chipping in with some early fake news on the subject of illegitimacy.

[1] It was sort of his anyway but had been confiscated from his dad for his backing of the wrong horse in the 1553 race for succession, Lady Jane Grey, that is.

They'll let you up and inside the gatehouse these days where highlights include an alabaster fireplace. 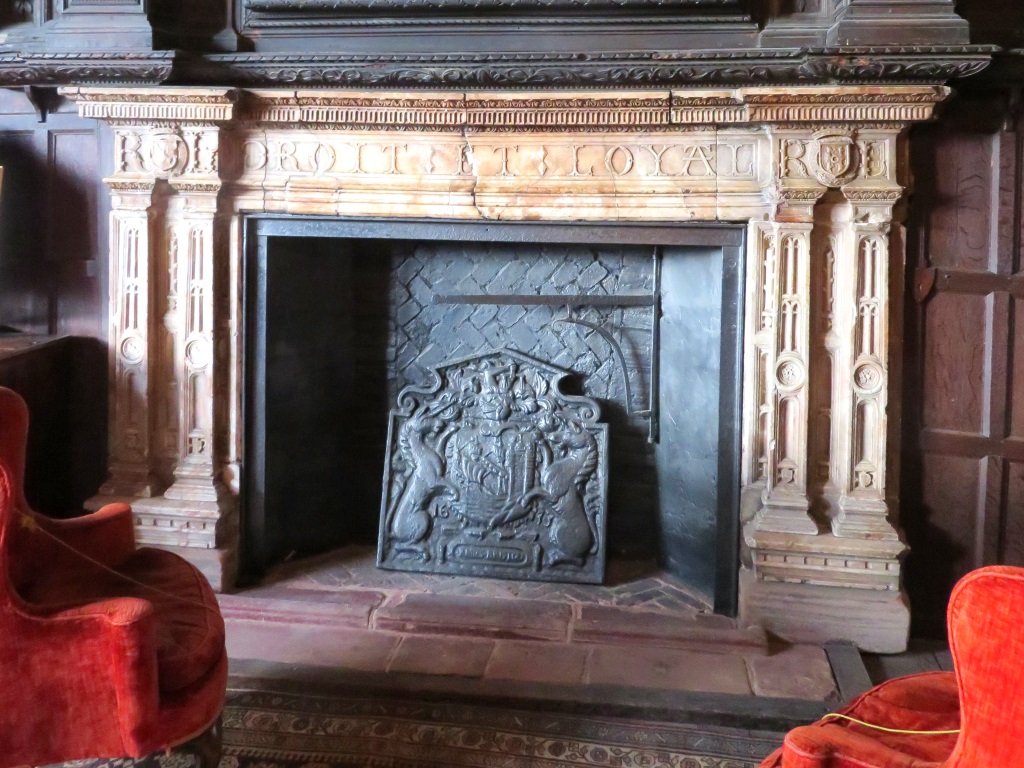 Before you too go 'whoo-hoo!', this would have provided the warmth to keep the royal tootsies toasty when QE1 was said to have stayed over. There's more information on the walls, which might help you make your own mind up on the nudging and winking front.

The gatehouse's most recent act of usefulness was as the drawing offices for Armstrong Siddeley, manufacturers of luxury motor cars whose Coventry factory took a pounding around the same time as Kenilworth's clock tower nearly did.

Not so sketchy as first thought since the castle had been sold, just before the war, to industrialist Sir John Siddeley, you see.

There's evidence of over six hundred years of ageing although some upkeep has been required to keep the keep up. 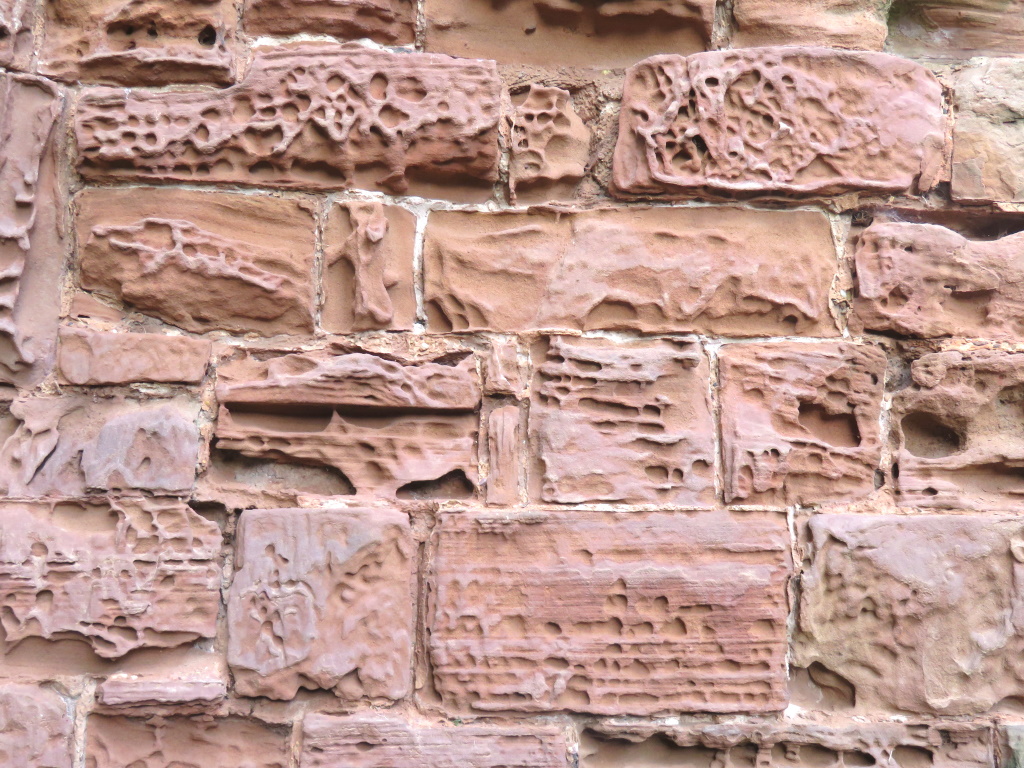 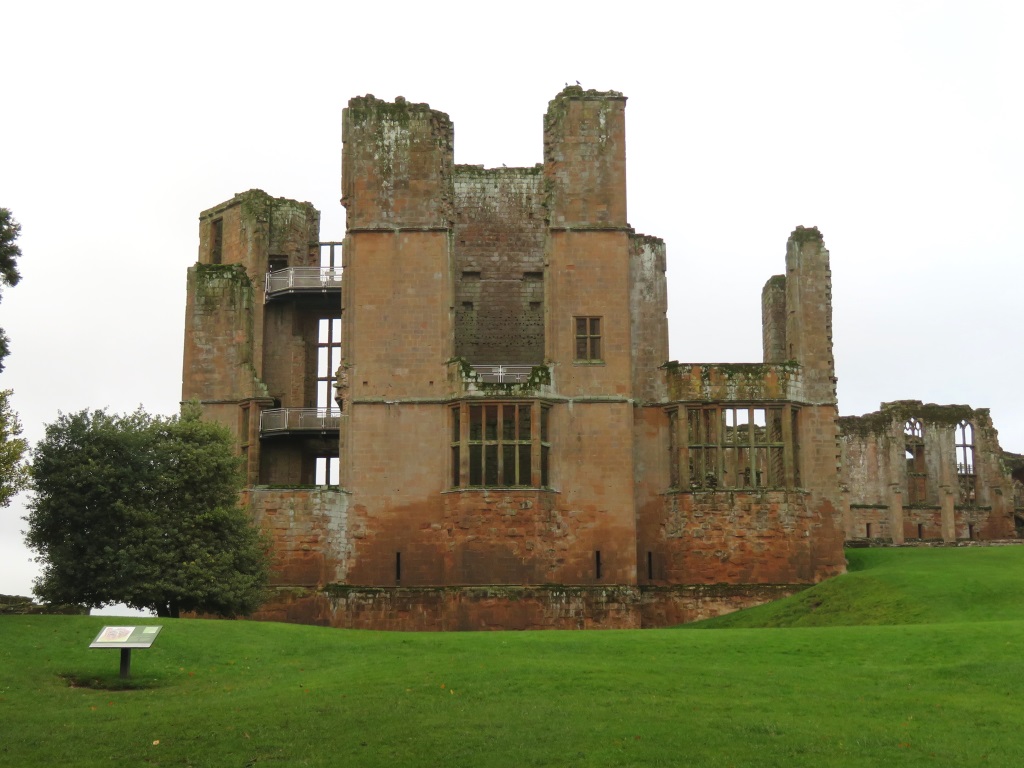 That's largely down to Oliver Cromwell and his army ransacking the castle in 1649 to prevent any rebellious, royalist types from using it as a stronghold, again.

What does remain requires some imagination of the then and now and there's a written reminder this is the Inner Court and this is the Great Hall, obviously. 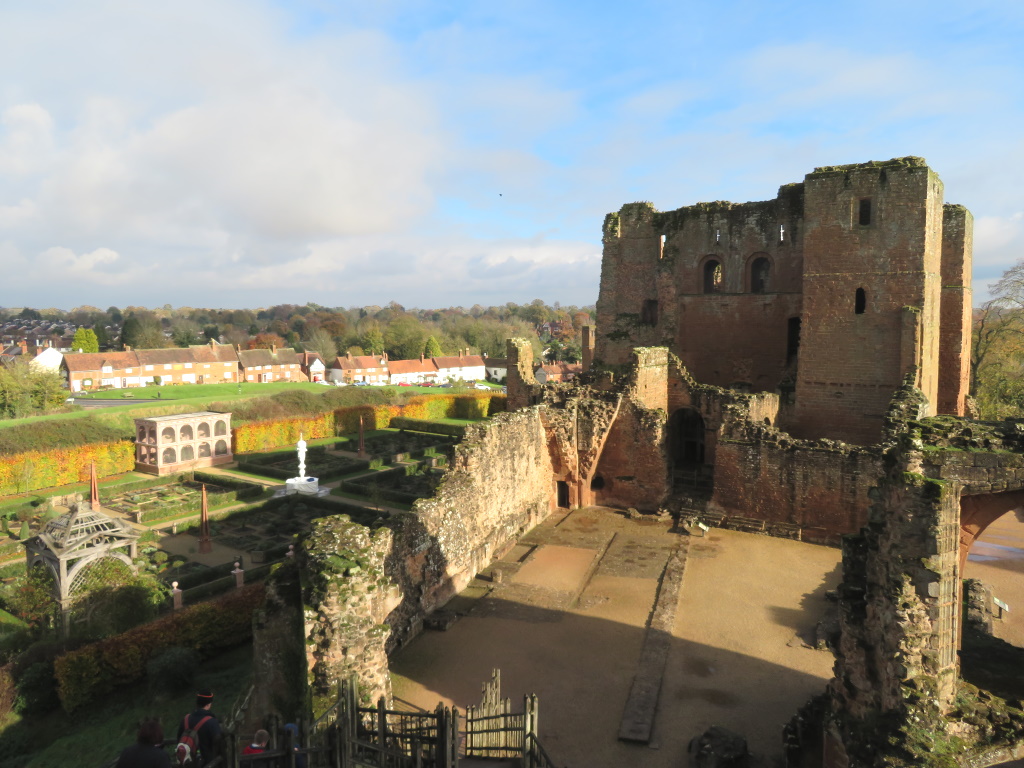 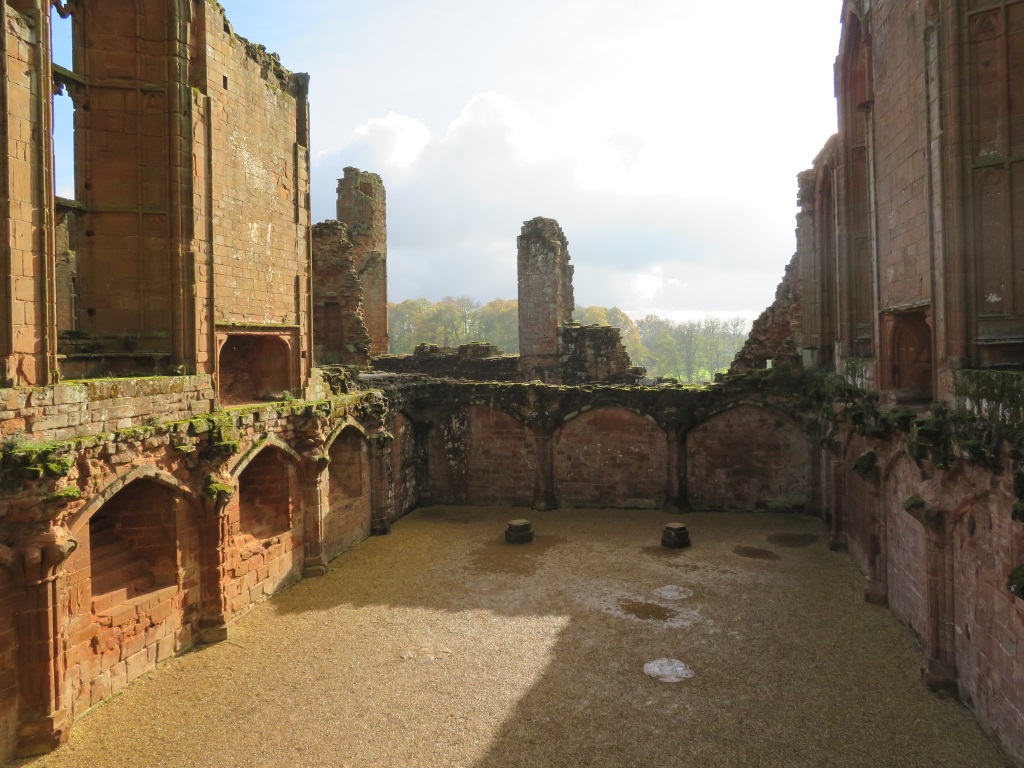 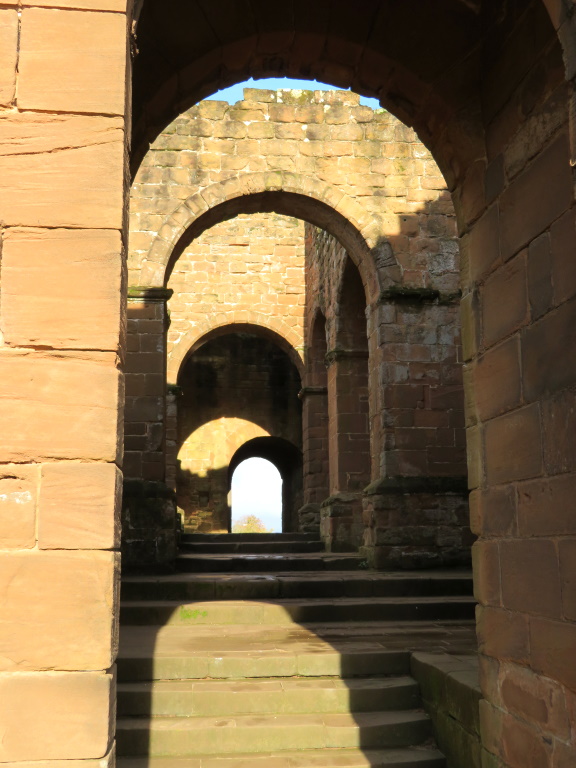 Just out of spite, Cromwell might have pulled up the bushes in the Elizabethan garden, restored quite recently to look as it would have in 1575. 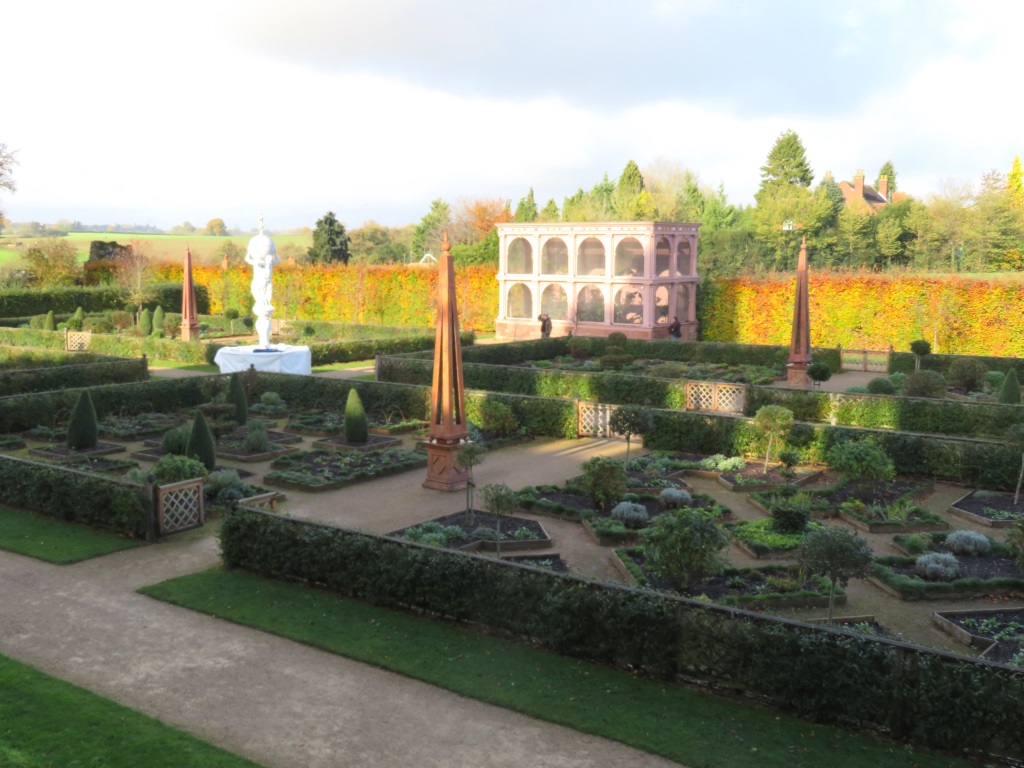 That's when Dudley laid on a three-week-long, lavish bash and Elizabeth was top of the invitations. This was one last attempt to tempt her into marriage, they say, but there was a problem.

Dudley's first wife had died mysteriously 15 years earlier by falling down the stairs in an empty house.

While the Queen polled well with the public, Dudley didn't and there was still a whiff of the scandal about him. To stay popular with the peasants, she said no and Dudley went on to die without a penny while he was still paying for that party, probably.

That's quite some story and somebody should make a film of all this. Oh! It seems they  have and Ms Blanchett might explain things better than this history flunker's interpretation of events.

They may well have filmed it but do you know what?... You put some words and music to that sunshine and you've got yourself a show! Hey! Lloyd Webber! Can you knock out a few tunes and make 'em jaunty, like the ones in Joseph...

Robert Dudley, he had a bit of history His first wife broke her neck when she slipped and hit the deck.
Robert Dudley, did they or didn't they? He plied the queen with fizzy and it's said that they got busy.
Robert Dudley, the only man Liz loved, they say, But after all the kissin', dead without a pot to...