There doesn't look to be too much wrong with the old one, Lanark, that is, perched high above the River Clyde as it makes its way north to Glasgow.

When the cotton mills came they built a new one, Lanark, that is, but that was at the bottom, fuelled by the forceful flow of the falls, sort of.

That means you park halfway and drop down for double social history, some fundamental physics and an urban planning primer. If that sounds a bit studious, stuff your satchel full of sandwiches for a geography field trip up a gorge where single file isn't always strictly necessary.

The evil[1] industrialist David Dale founded New Lanark in the 1780s on the back of the invention of the water-powered loom. The Falls of Clyde would spin the wheels that spun the cotton that spun the heads of those in for a potentially profitable investment. 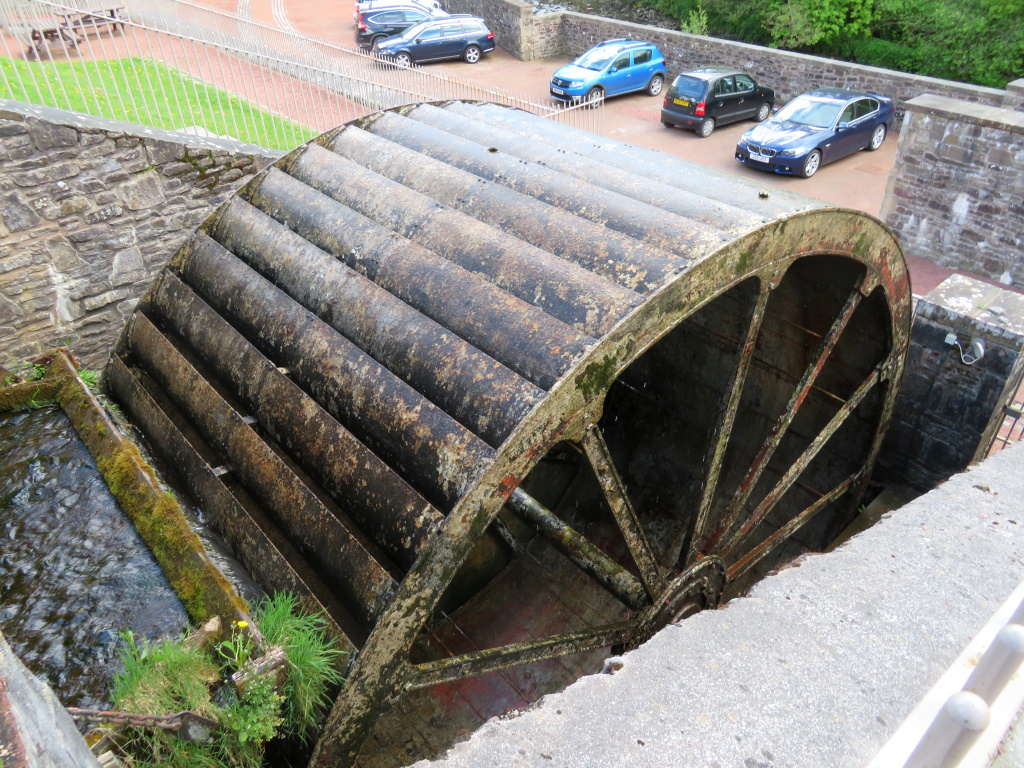 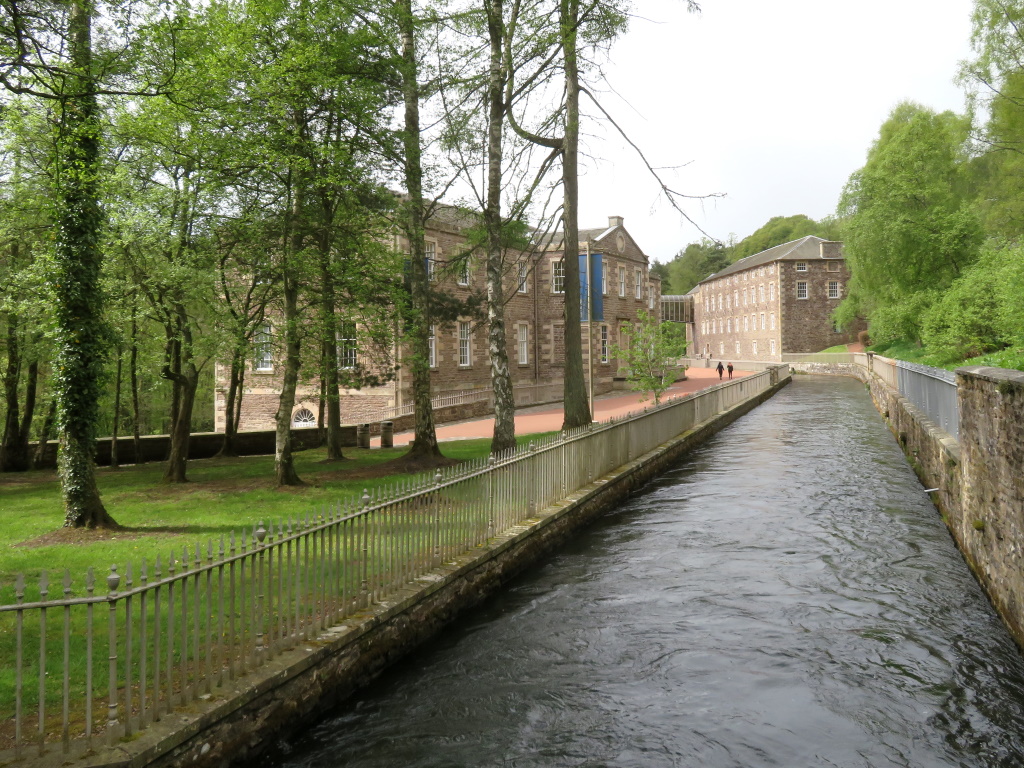 Ten of these at the time but just the one on display, these days, but only because the mill that was once on it burned down. Cleverly fed by a canal constructed parallel to the Clyde, well done! That is a classic Breastshot wheel design.

The swots can put their hands down now, all turn to page 11 and... STOP TALKING AT THE BACK!

[1] Some exaggeration may be necessary for the narrative.

By 1800, Dale had been bought out by a bunch that included his son-in-law, a Welshman called Robert Owen. Owen strove to improve the atrocious[1] living conditions of the near-2,000 workforce who lodged largely in the tenements, just a short walk from the mills. 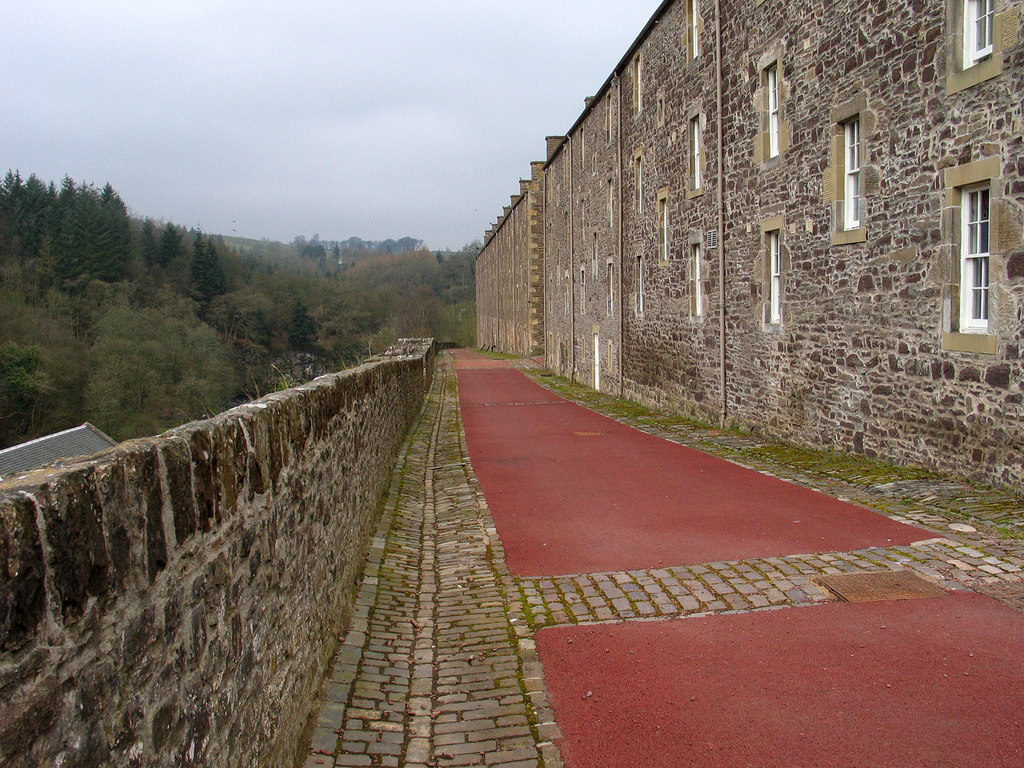 Nothing new with this urban arrangement you say munching on a Cadbury™'s chocolate bar but Owen was the pioneer of this form of social reform. His not-for-profit on-site shop opened the doors to the Co-op™ and the scene was now set for the trade union movement.

Owenism became a thing and with a touch of the utopian about him, he headed off to Indiana where an experiment in socialist idealism wasn't quite so successful.

Seems it's not so simple to share the spoils when those around are likely to pull a pistol if you insist. That bit, by the way, isn't necessarily on the syllabus.

[1] Enough with the exaggerating already.

Largely because of Owen, New Lanark has a UNESCO™ Word Heritage Site stamp and, as should be known by now, they don't hand them awards out willy-nilly. Unlike Pompeii, say, these buildings are largely intact making for a mid-double-digit entrance fee. 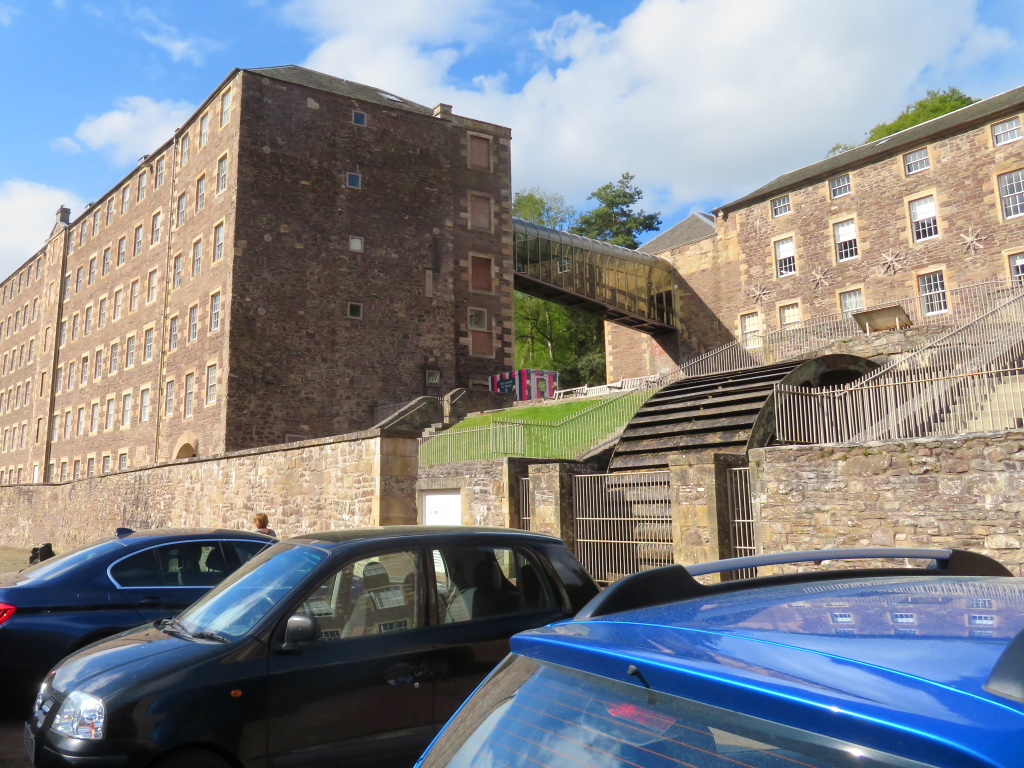 Their facts, though, are much more fully formed and the mechanics of the mills get more than a passing mention. You can get at 'em via the Visitor Centre or the old 'New Institution for the Formation of Character and Engine House', which just sounds like an Owen afterthought and he had nowhere else to put it.

With an 'exciting' educational element, there's a good chance you'll be sharing with large groups of pupils and students...

Ding-a-ling-a-ling-a-ling-a-ling! There's the bell for the break so it'll be nice to get some fresh air after that stuffy lesson. Looks like you're heading straight behind the bike sheds, though, it's typically gone and started to rain just in time for playtime.

The entrance fee is for the upkeep, as is a resourceful use of the real estate. Rent from the long-term tenants in the tenements, holiday lets and a hostel-full of youths with further funding from Mill #1, now the New Lanark Mill Hotel.

The conversion is more imaginative than the name and there's access to Owen's restored rooftop garden when there isn't a wedding on. They're not cramming 'em in like they used to, neither, wide, ample corridors and spacious rooms with, just for once, a window you can open. 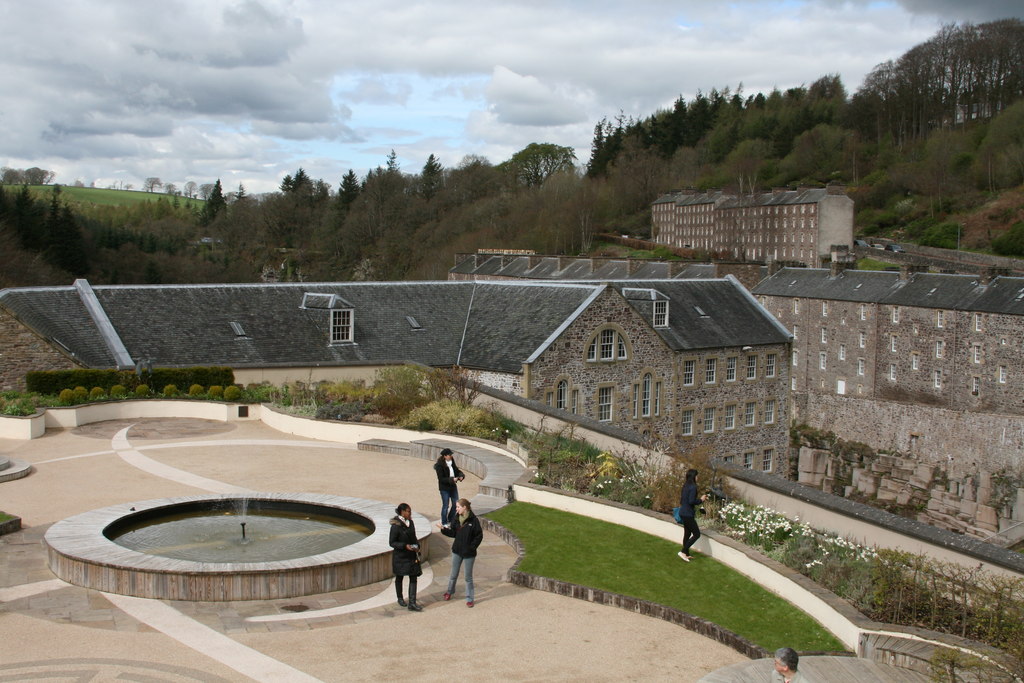 The lady on reception is from Germany but she's been here long enough to sound wonderfully like Jan Mølby would have done had he gone and signed for Celtic instead. She's happy there are no objections to an accessible bathroom since some guests have been heard to complain... 'But I'm NOT disabled!'

A sympathetic 'People are quite stupid aren't they?' gets you a reservation in the restaurant that's way better than their menu suggests with the confident, youthful staff just the right side of attentive.

Leaving, a slightly damper than when you arrived, New Lanark behind, absolutely everybody will take exactly the  same snap from exactly the same spot, apparently. 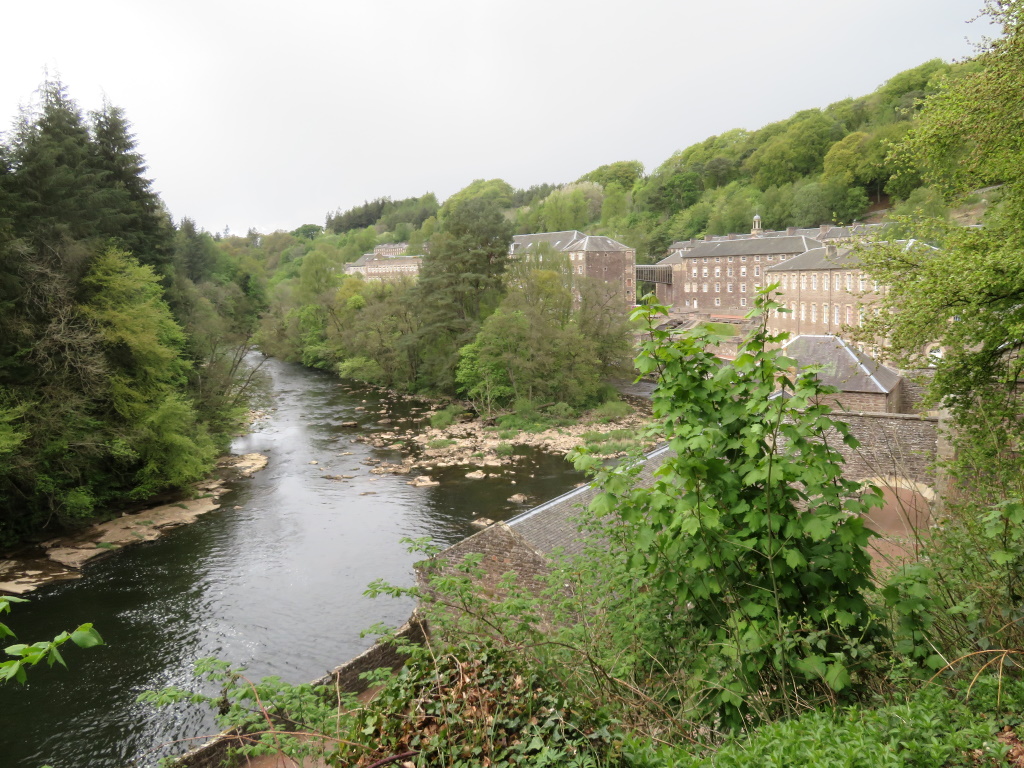 There's a signposted path, you see, heading south by the river to what's been known to many for centuries as the Falls of Clyde.

Before them, though, this Art Deco outbuilding is the Bonnington Power Station, a later example of harnessing the hydro. 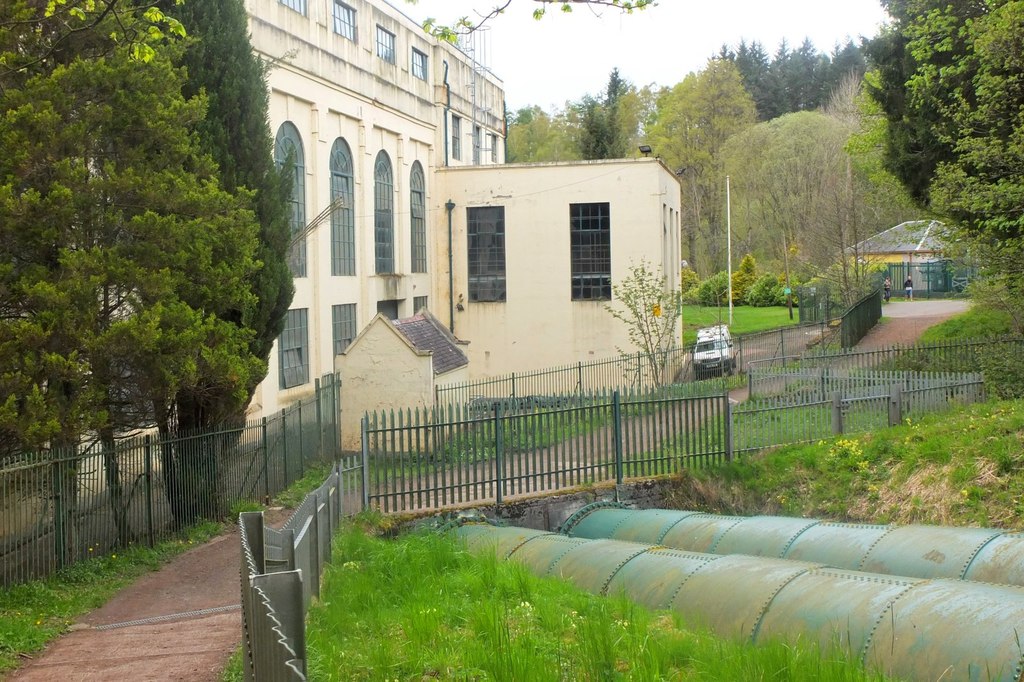 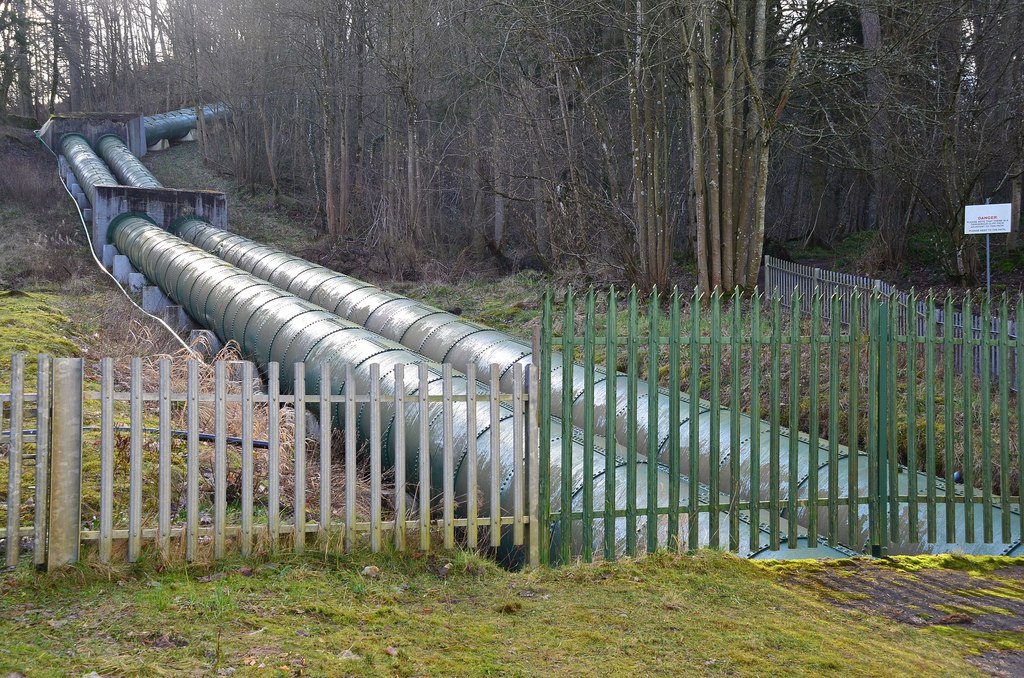 The pipes lead uphill to where the river is diverted, somehow, back down to the turbines to provide enough electricity for 17,000 homes, it says here.

To put that into perspective, Chernobyl #4 reactor could power a million condominiums before the meltdown and yes, since you ask, it has just been  watched thanks to Now TV™'s free trial.

You did cancel it before coming away, didn't you?

It's a short lug up to a viewpoint and, finally, the Falls of Clyde, sort of. Three falls here, actually, and while it's no Niagara, Corra Linn is the Clyde's highest at about half the Horseshore's height[1]. 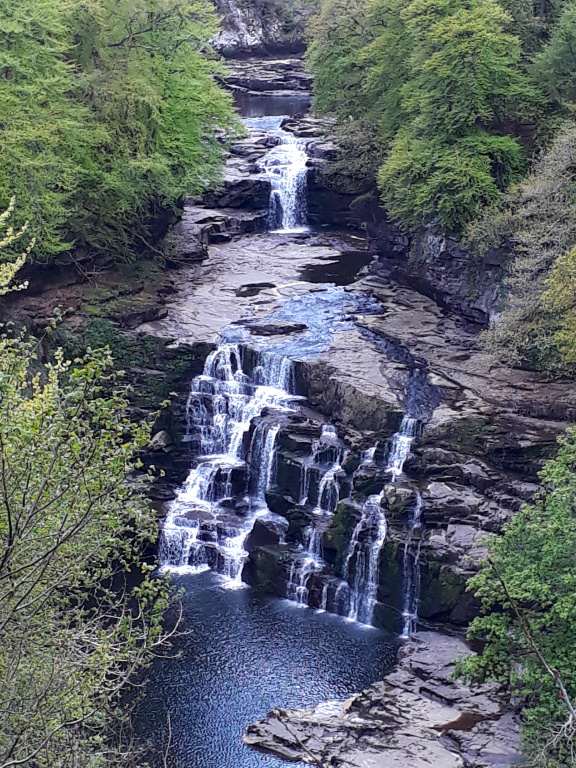 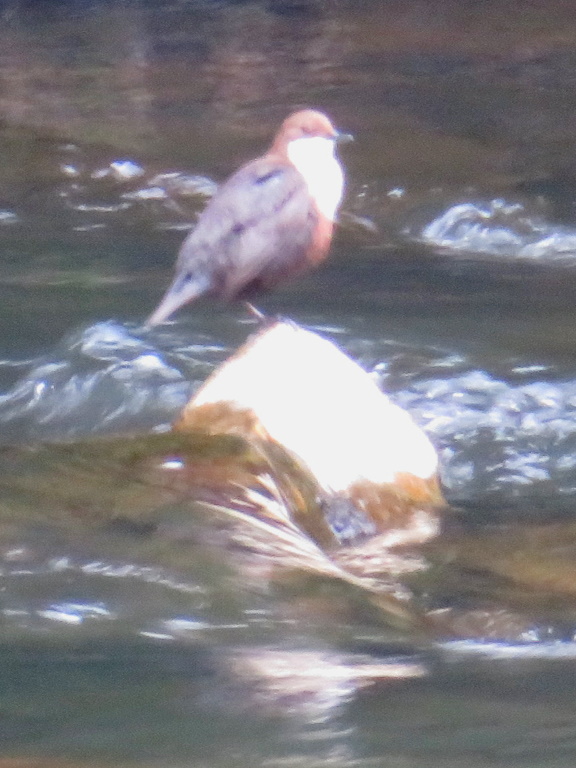 Peregrine falcons nest in the cliffs opposite, not shown, which explains the flightiness of the common sandpipers, not shown, neither, and both too fast for this amateur snapper. Unlike the, admittedly blurry, dipper who has no such fear unless it's just a young 'un and has no idea of what's eyeing it up from above.

This designated nature reserve and trail is managed and maintained by the Scottish Wildlife Trust who have an unmanned presence back in New Lanark in what's thought to be an old workshop.

The bigger bit of it over the water is even better, they say, if only there was some way across?

Careful now as you make your way over and while that's a joke, of course, there is a crossing point down at Bonnington Weir. 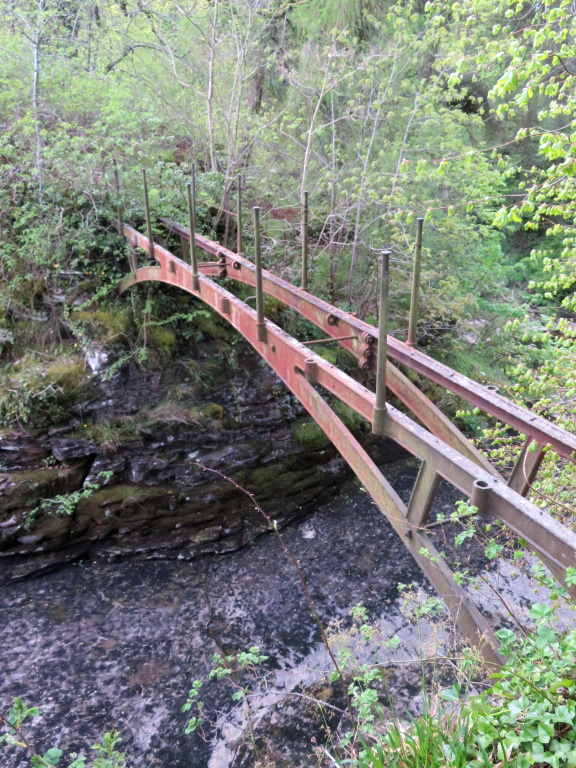 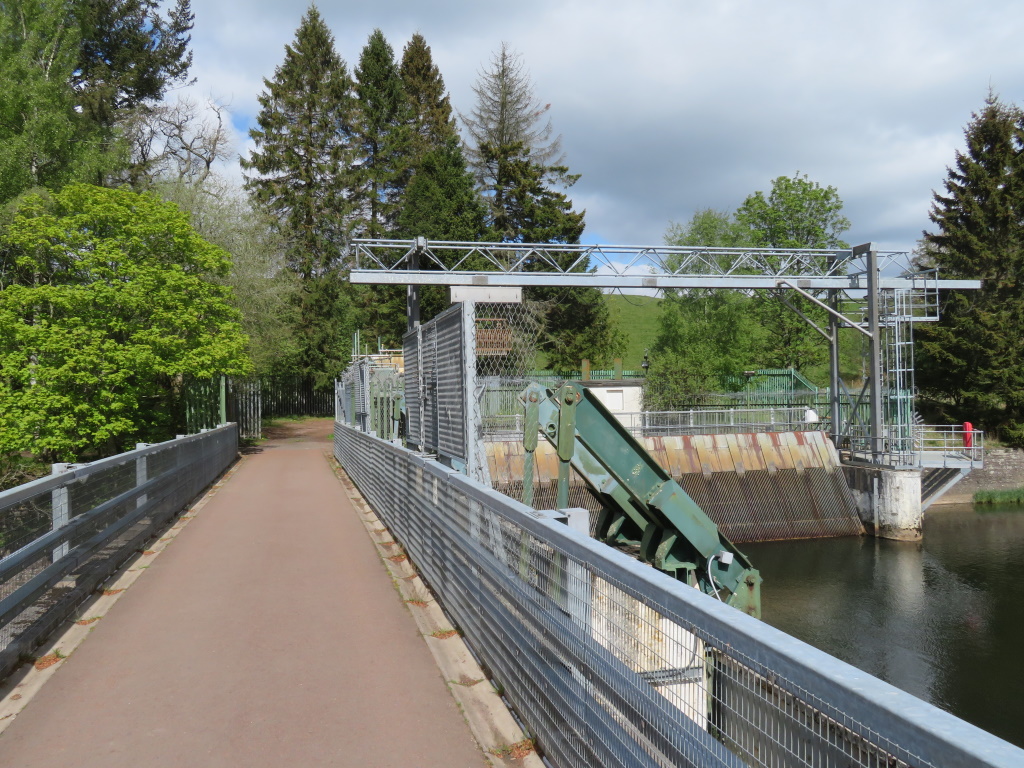 There's normally a dam involved in such scenarios of semi-industrial sabotage but this river don't never run dry with SlyBob's pair of hoods pulled up twice today already. 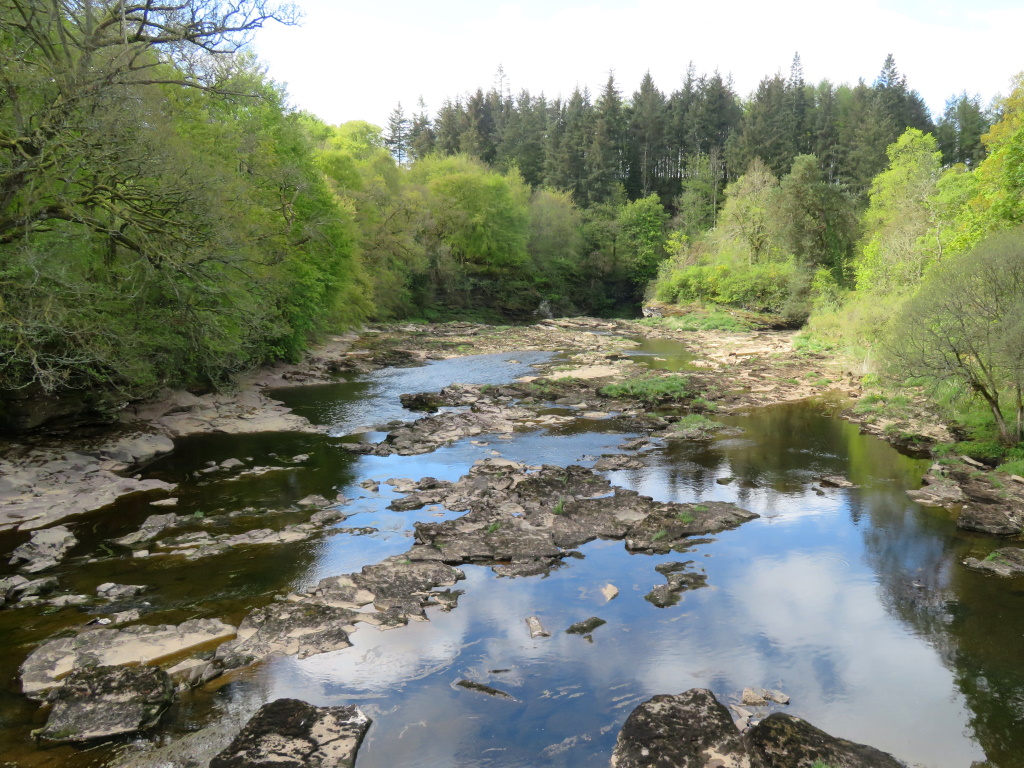 The weir is just here to stop the flow from fluctuating too much and that's good news for the otters, not shown, who won't end up washed up in Lanark.

If you do decide to cross, you can make your way up by the west bank of the Clyde where most visitors don't venture and the squawking isn't solely the sound of schoolkids. That, though, is a full afternoon out with the next crossing point back more than a mile than you might like.

If you didn't decide to go full circle, it's simply back the way you came to arrive at, get this, Britain's first infant school. 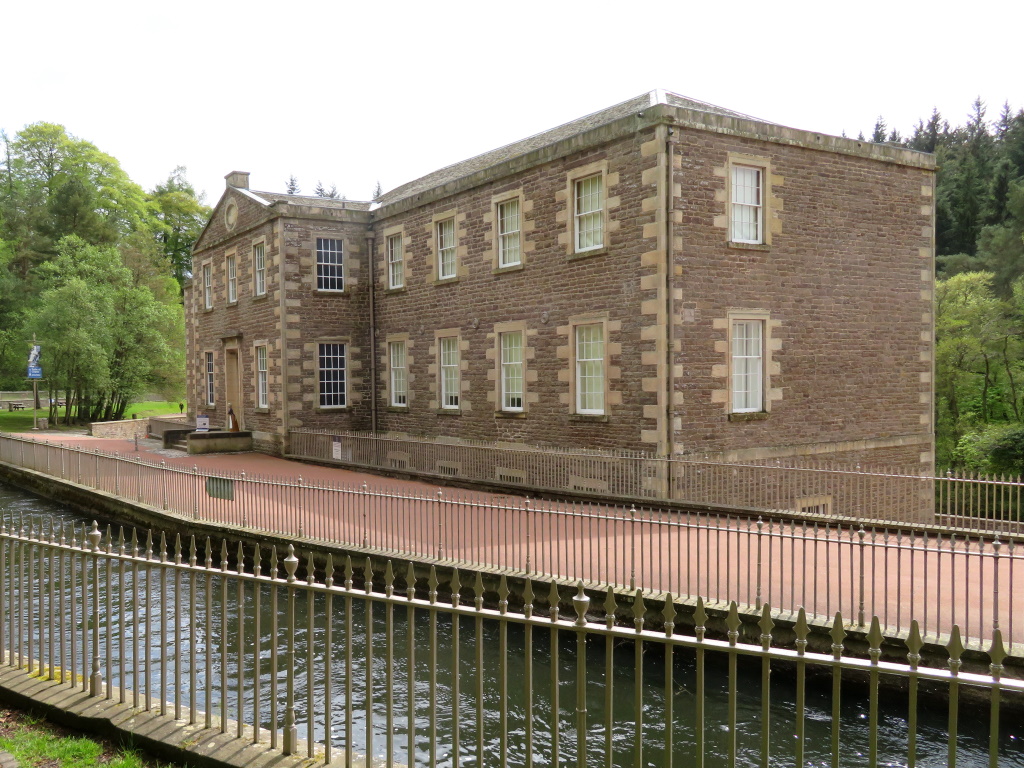 More fine work here by Owen and no fear back then of any milk being snatched but full circle is something Owen did do, back to his birthplace in Wales.

He had relinquished all interests in New Lanark by the time he returned from Idaho, or wherever, so you won't find him under the graves, a diversion on the way back up to the car park. 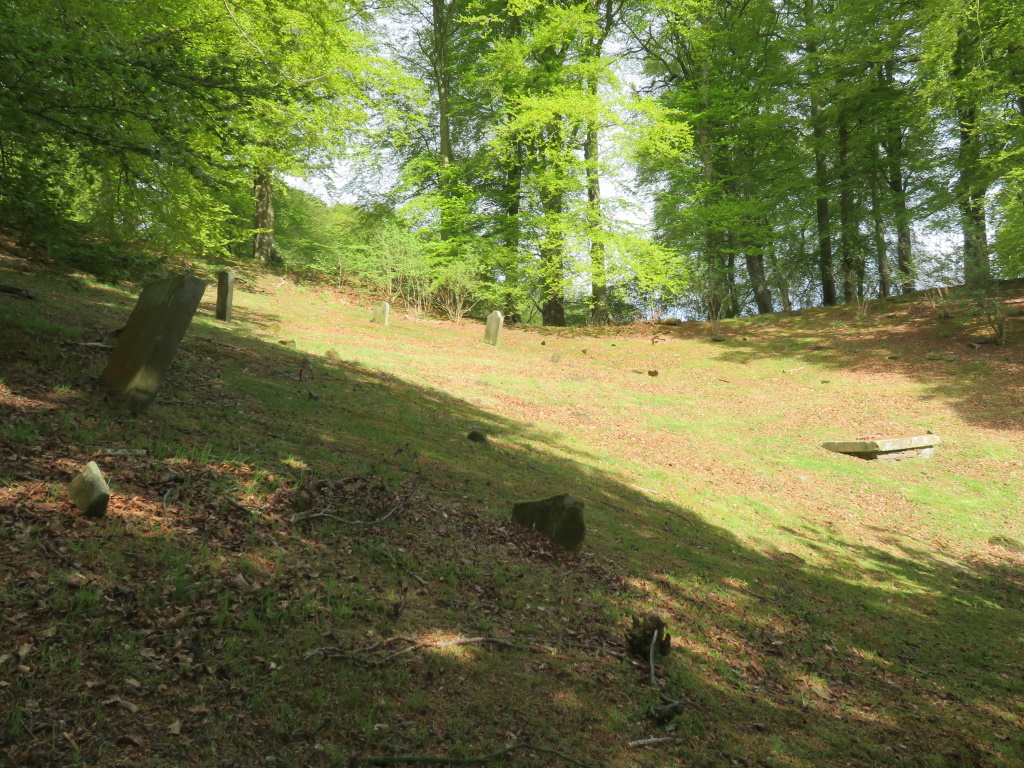 He died penniless in Powys and there's a museum there that remembers him best but his fate was sealed from the very beginning...

What else are you going to go on and do if you're born in a place called Newtown?