Enchanting garden steeped in history and surrounded by dramatic scenery, they say.

It's an enchanting garden steeped in history, alright, but Benmore's all about the botany, basically. It belongs to the Royal Botanic Garden Edinburgh, you see, and it's one of three satellite gardens outside of 'Auld Reekie'. 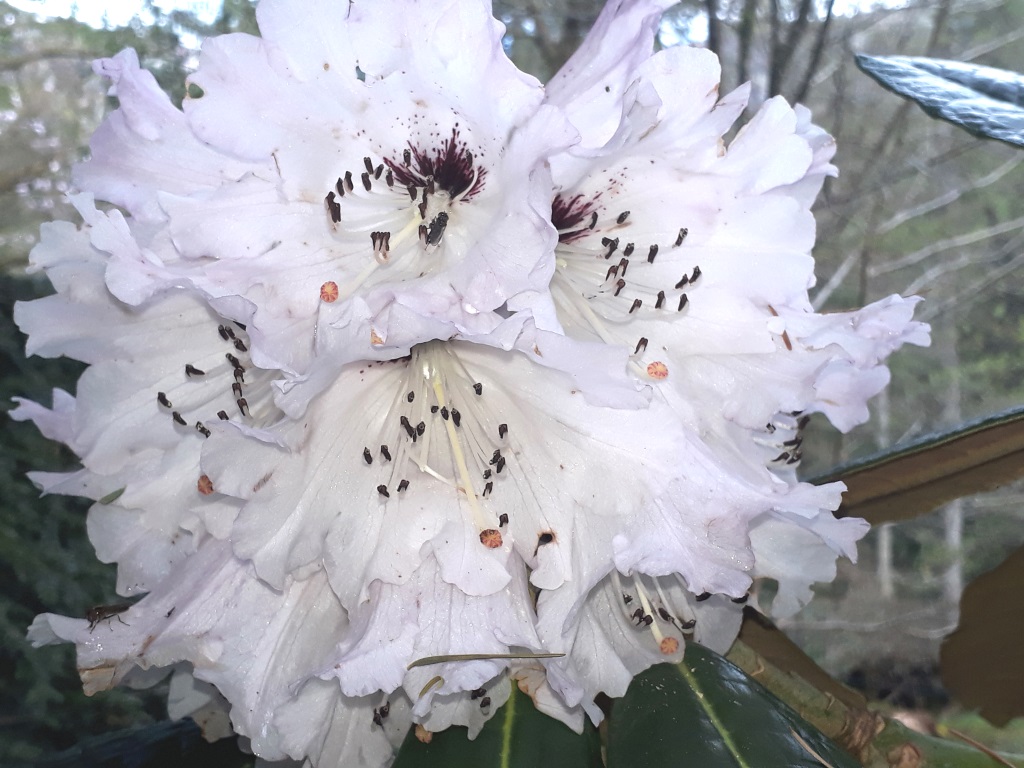 There's one in the Borders and another way out west where the milder winters mean palm trees proliferate there. That's all down to the Gulf Stream, they say, but that's still not convincing.

You ever been to Stranraer in December?

SlyBob's been here before, at least twice, because it represented fairly good value at less than £5 a pop. There's since been a 30% hike[1], which is way steeper than the seven miles of trails around the lower slopes of Beinn Mhòr. 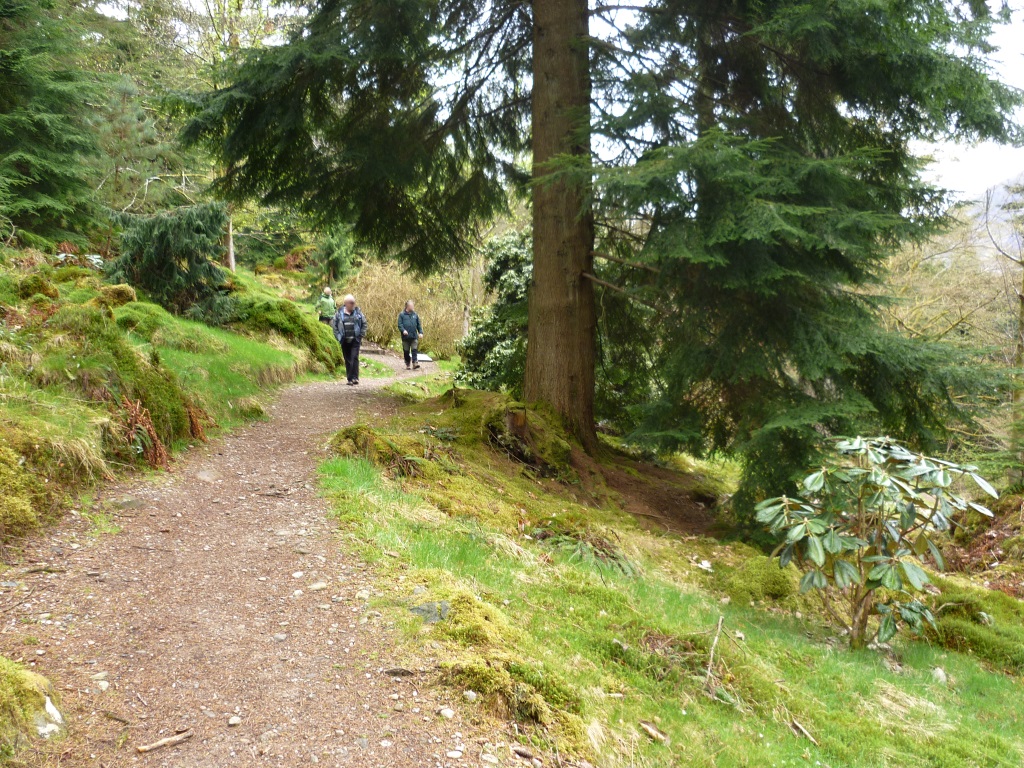 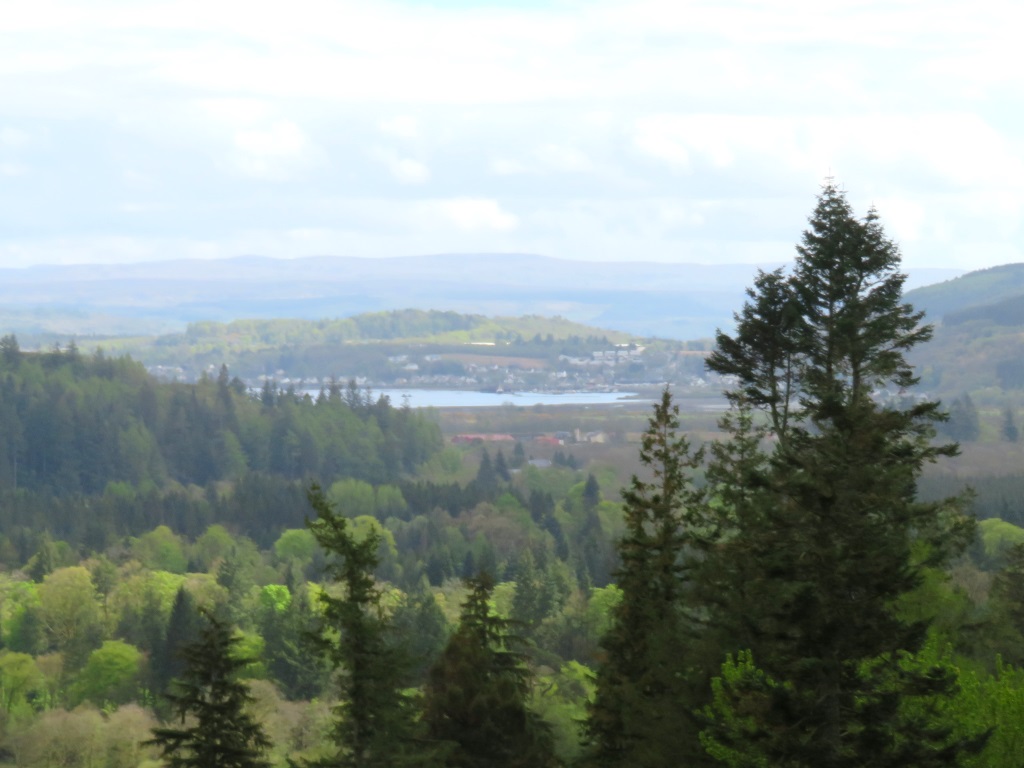 That makes for a fine view and a full day out, nearly, just not November through February. The other gardens keep similar hours and if you find their shutters down, you really need to ask yourself why are you in Stranraer in December?

[1] It was jokingly suggested in 2009 that they could put their prices up and they'd still get a visit. So they did.

Not being botanical types, unless your're talking about a clear bottle with 'London' or 'Plymouth' printed on it, but isn't that an avenue of sequoias or giant redwoods if you'd rather? 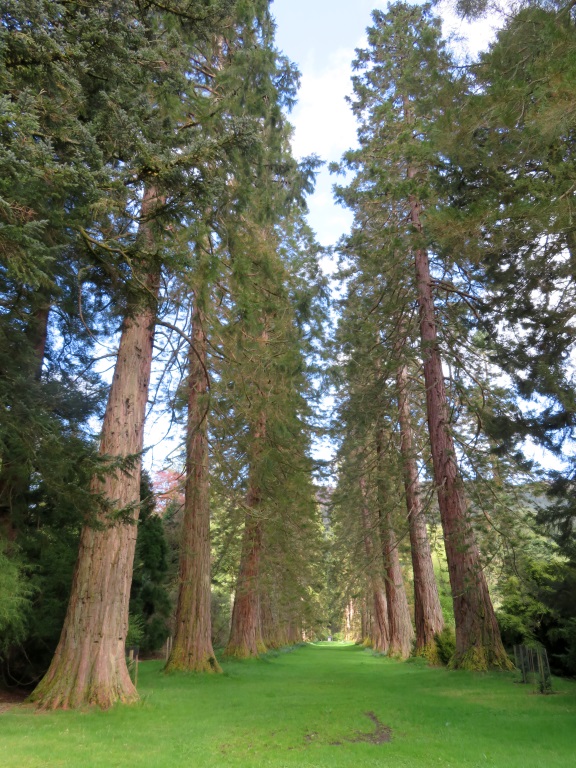 It certainly is but at less than 200 years old, these are mere saplings compared to their Californian cousins and the only thing being driven through these is a big lawnmower.

Being so clueless, it's not even known if it's too early or too tardy for the flowering rhododendrons, which are an annual attraction, they claim. 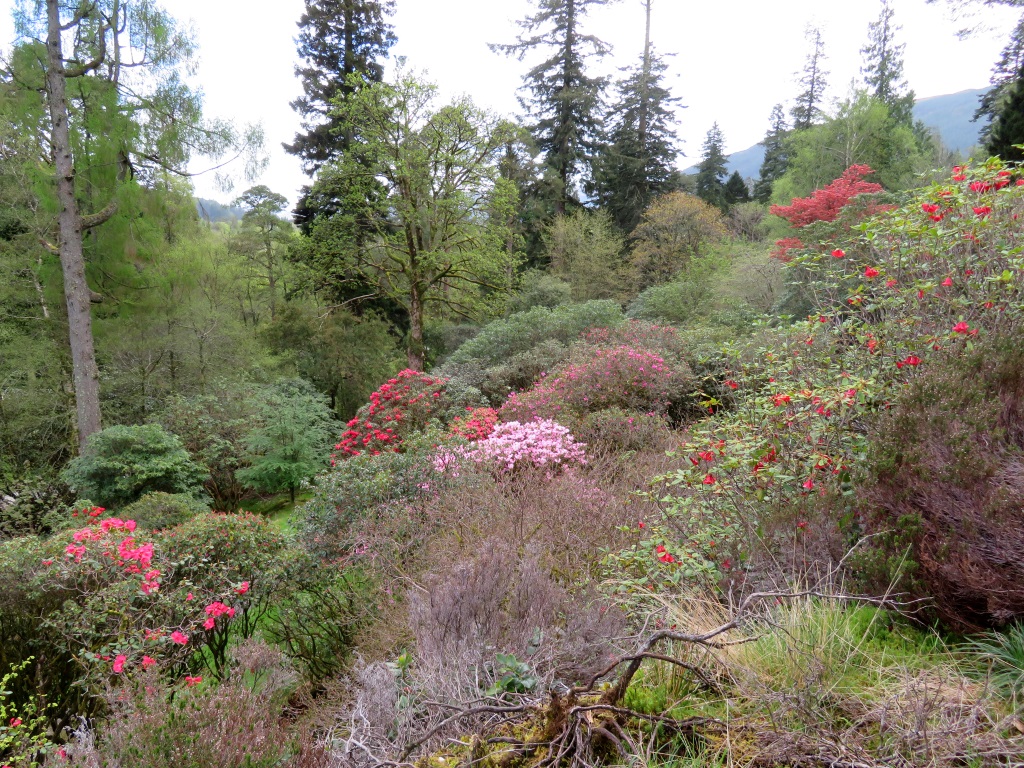 Turns out it's a fortnight late and this was a riot of colour towards the end of April although things could hardly be called hueless today.

It might not be December but it's a different kind of chilly up the hill. Chilean, actually, and the recreation of a traditional, 17th-century church found on the island of Chiloé, obviously. 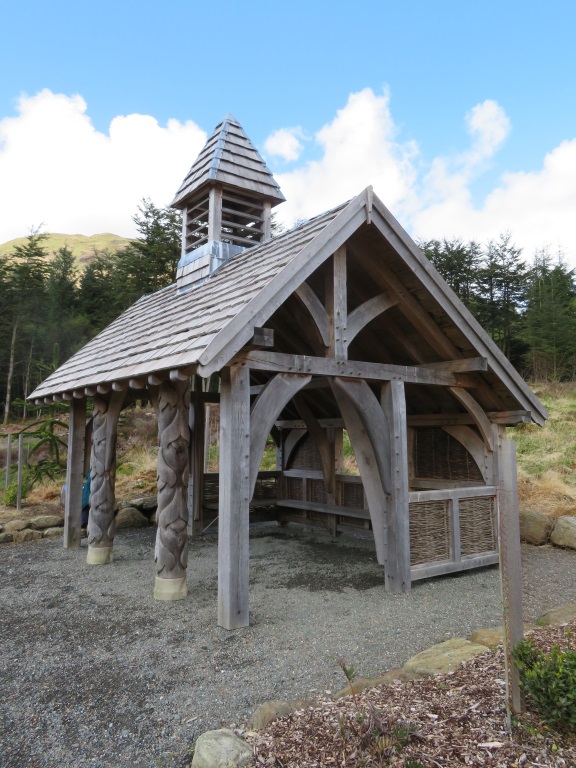 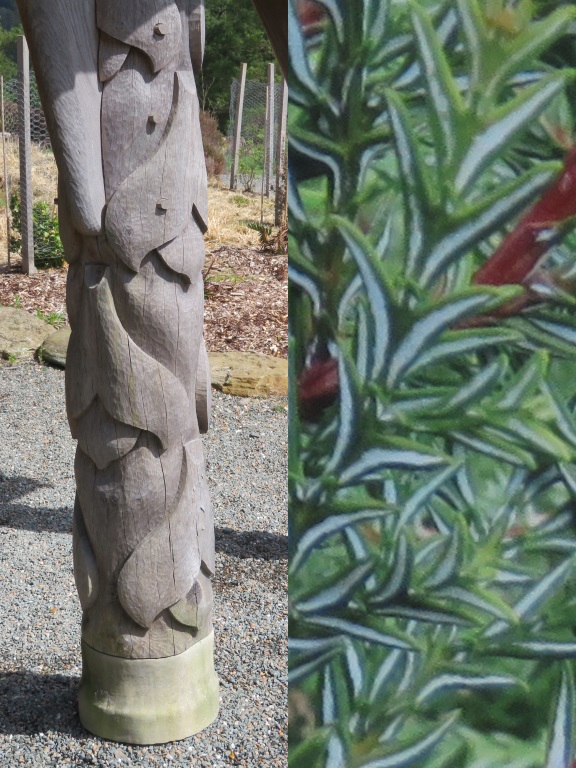 Not from the native conifers this one, though, more your Northumbrian oak and American cedar for the shingles. The intricate carving of the pillars is nicked from nature and the shape of the leaves of Austrocedrus chilensis, which is just a posh way of saying a cedar tree from Chile.

This wasn't here on the last visit but it's not thought that the pricing suggestion paid any part in its construction.

It's more likely down to the suggestion of a dyslexic resident of Dunoon, just back from what they thought was a week on the island of Clitheroe.

There's some upping and downing to be done to reach the Victorian ' Fernery' and they went mad for these during the fern 'craze' of the mid-1800s, honestly. 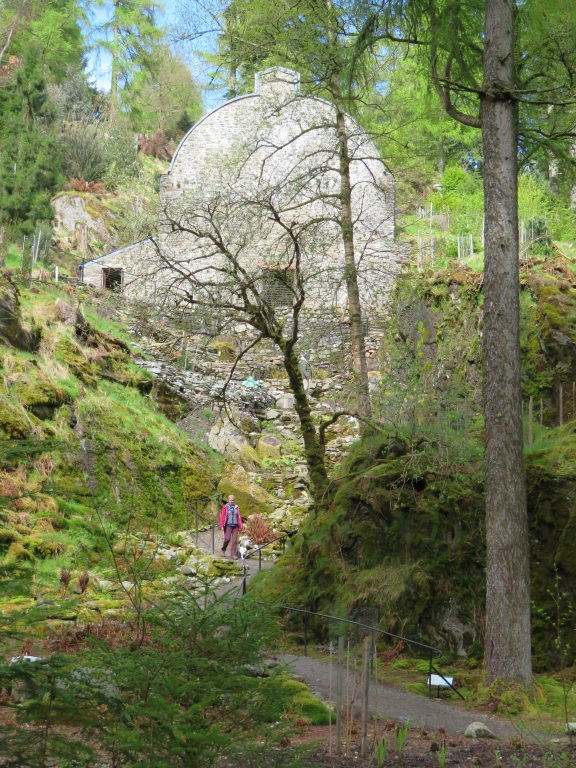 It even caused Charles Kingsley, no less, to coin the term 'Pteridomania' when he wasn't too busy peddling period racism and putting a satirical spin on the subject of children underwater.

The fernery's function was simply to show off the foliage but ferns were firmly out of fashion by the 20th century so the restoration of the 1870 building is relatively recent.

There are no records, written or pictured, so it's anybody's guess as to what specific Polypodiopsida were once in here. What they have managed to recreate, however, is a big, clammy greenhouse with a little bit of a whiff and, of course, it's still got quite a few ferns in it.

Benmore House and the surrounding estate had a succession of owners who just happened to inherit some pioneering conifer plantations. In a spirit of solidarity, they all kept up the gardening on a grand scale and that included Mr Redwood or whatever his name was[1]. 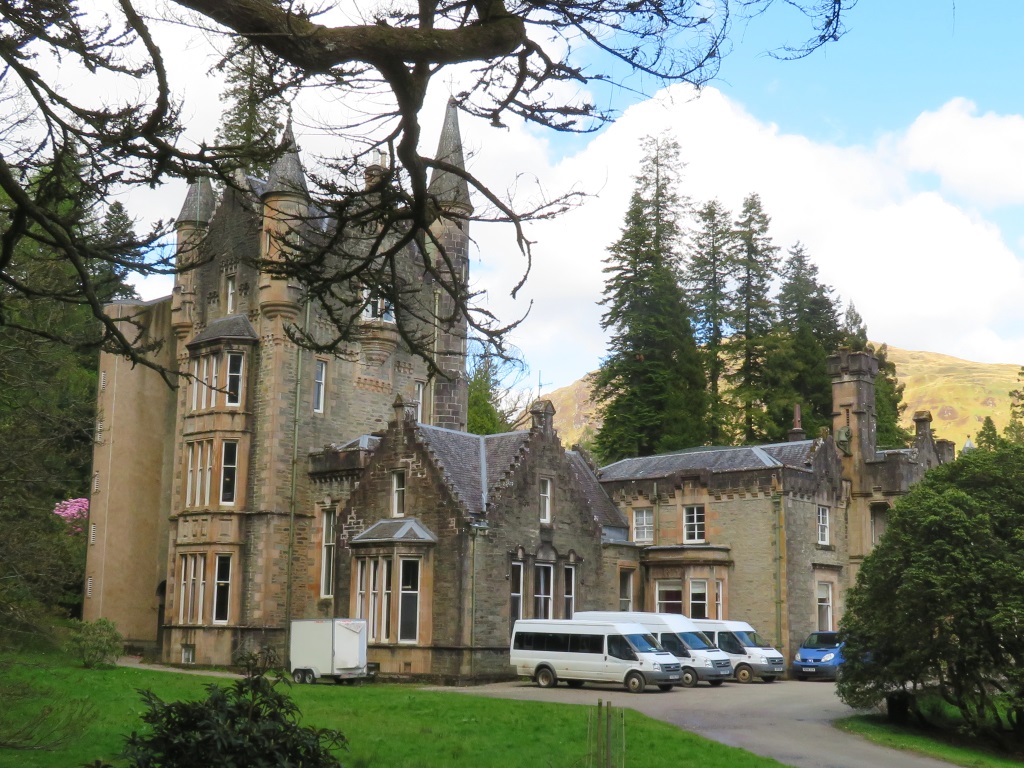 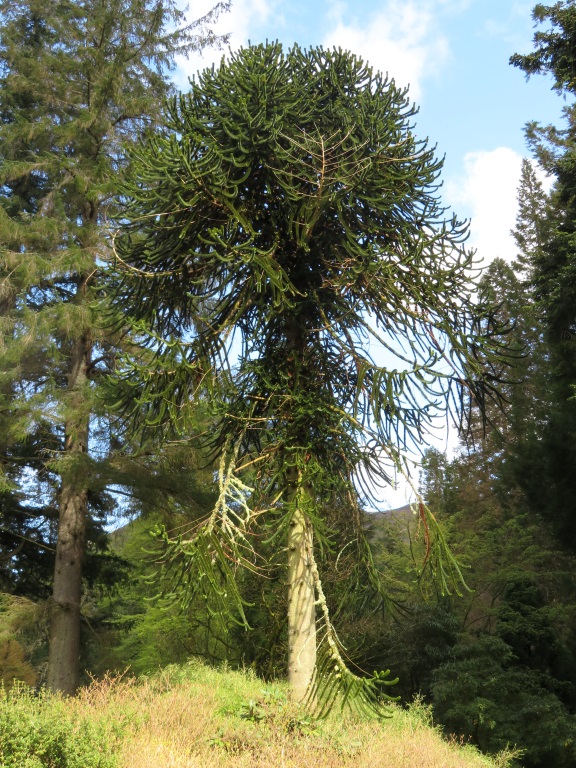 It wasn't, however, until the Younger family, of Edinburgh brewery fame, that things started going truly exotic thanks to them sponsoring Victorian macho men with twiddly moustaches and machetes to bring stuff back from Bhutan and the like.

That's the rambling reason why all of this is here, halfway down a random peninsula in one of the soggier parts of Scotland.

There is, however, a shorter version that can be spelled out in two words... rainfall! That and the relatively mild winters that they've got with their old pal the Gulf Stream to thank for or the North Atlantic Drift if you go with current conventions.

Harry George Younger, the younger, would later gift the estate and in 1929 the Royal Botanic Garden Edinburgh was finally able to uproot shedloads of Chinese shrubs they'd found themselves nursing.

The rest, as they say, is Gaoligongshania megalothyrsa or it would be if they could actually say it.

[1] James Piers Patrick and, in his defence, he was American.