In 79 AD, Mount Vesuvius erupted with such force that molten rock was thrown over 20 miles into the air. It's well known that Pompeii copped for most of the pyroclastics later that night but the lesser-known port of Ercolano didn't go undamaged and by that, it's meant buried under 60 foot of debris.

The culprit is just over four miles away but digging didn't really start here until the '20s. Earlier efforts in the 1700s were abandoned in favour of Pompeii, which was starting to unearth its secrets by then. 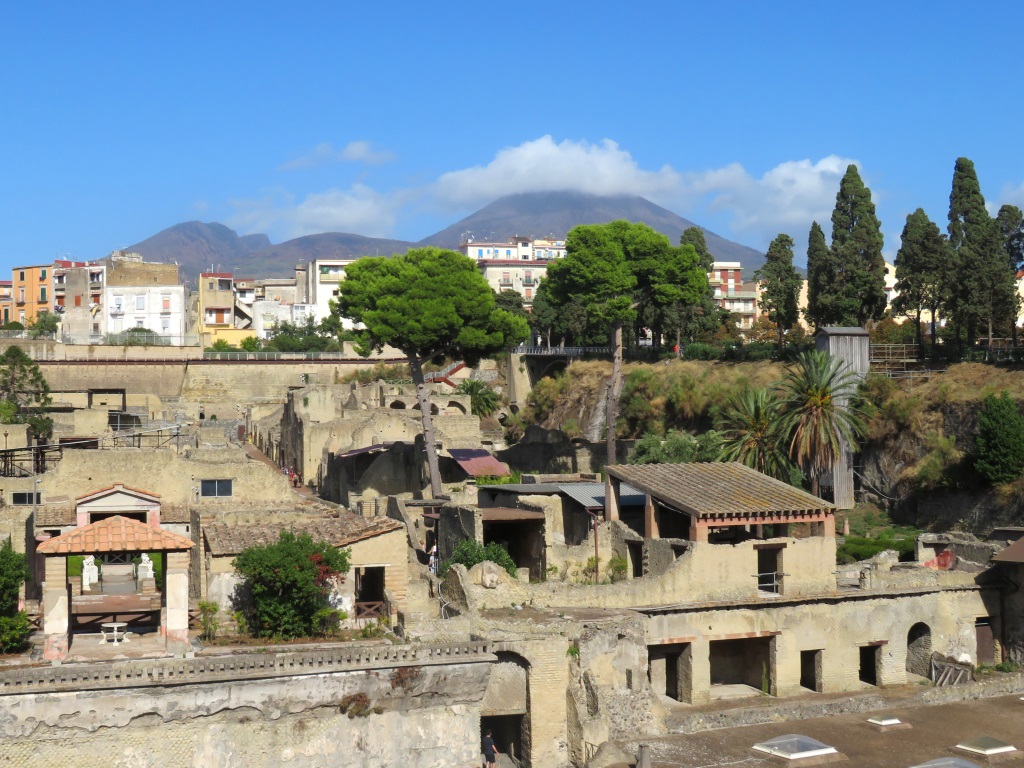 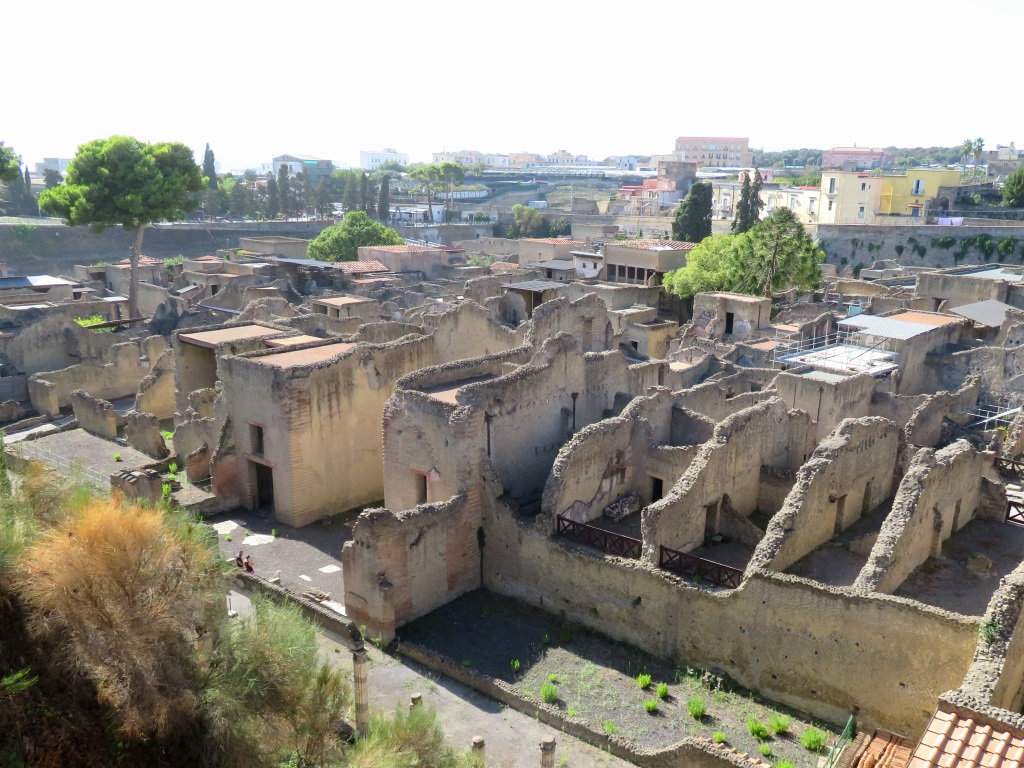 There's a big spoiler beneath you on the way to the main entrance, all 10 acres of excavations or nearly five football pitches if you'd rather.

Most of it is remarkably well preserved, considering nearly 2,000 years underground, and that includes the original wood and the roofs. Most of the heavy stuff landed on Pompeii, you see, which despite being 15 times the size[1], what remains there is largely not even half the height of what's here.

It all sounds a bit dodgy round here but it's a surprise to learn that a Taberna isn't necessarily a boozer even if a Thermopolium is just a hot food takeaway, really. What first reads as the 'House of Sex'[1] is just the name of the master baker for these were well-to-do folk and this was the posh part of town.

They know that largely from the fancy interiors although this was no deliberate colour scheme. Yellow turned to red as the poisonous gasses descended meaning there was nobody left to comment 'I like what you've done with the spare cubiculum.' 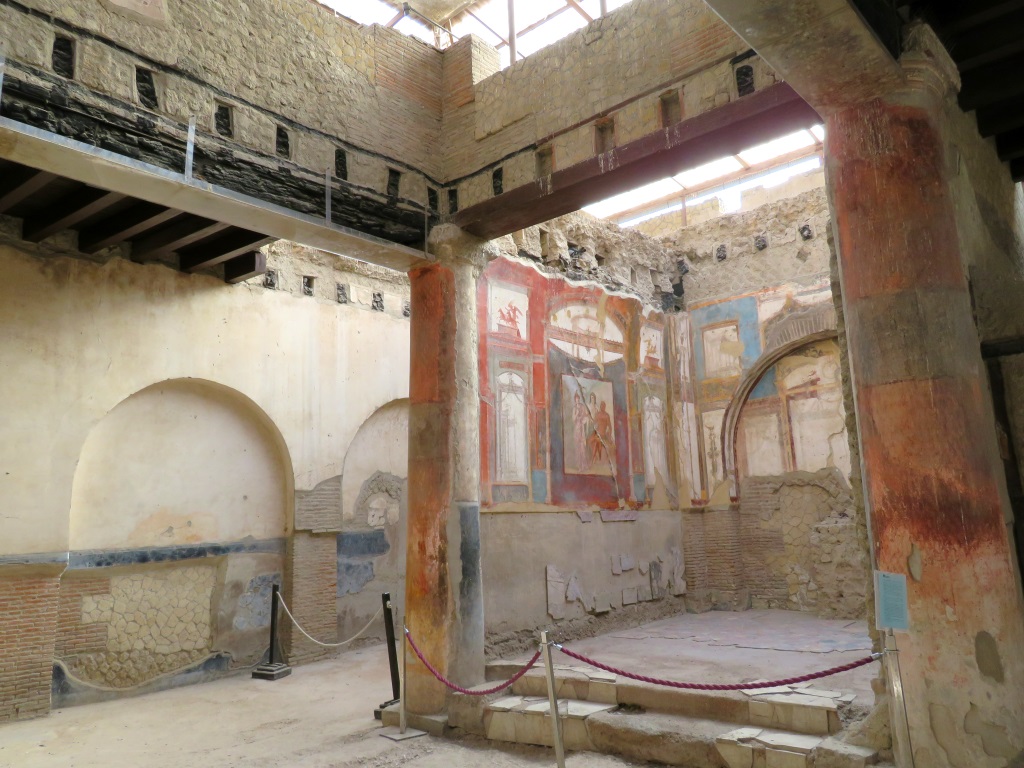 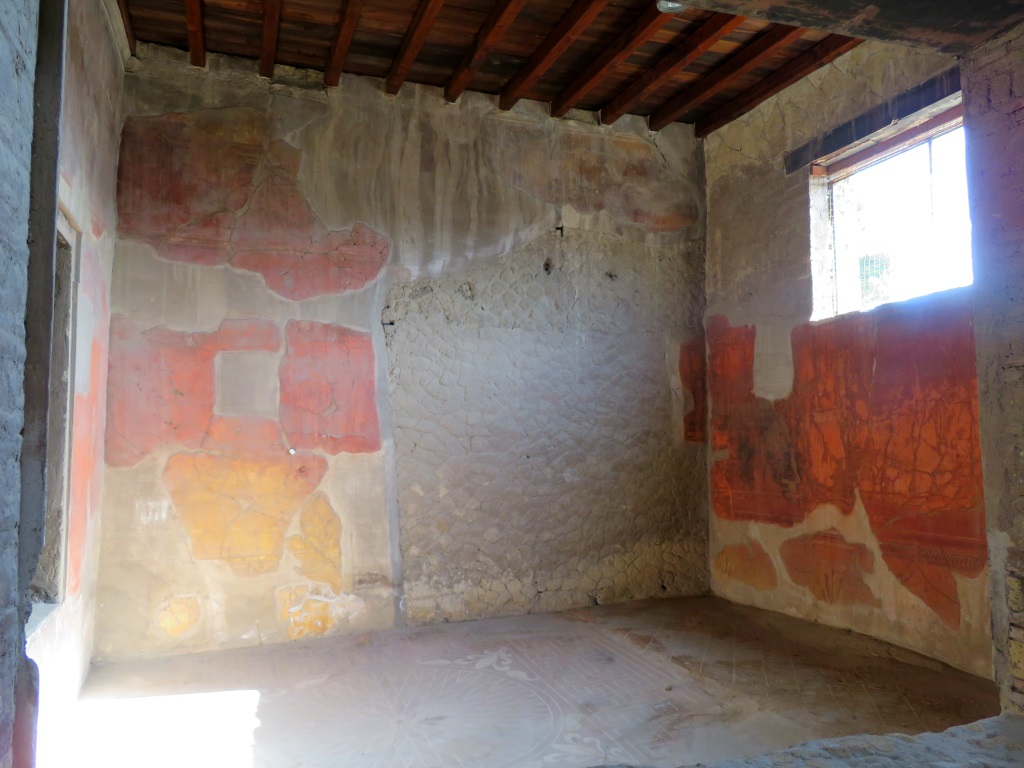 They rotate access to the buildings to try and reduce the cumulative damage from people's greasy mitts and, astonishingly, graffiti. 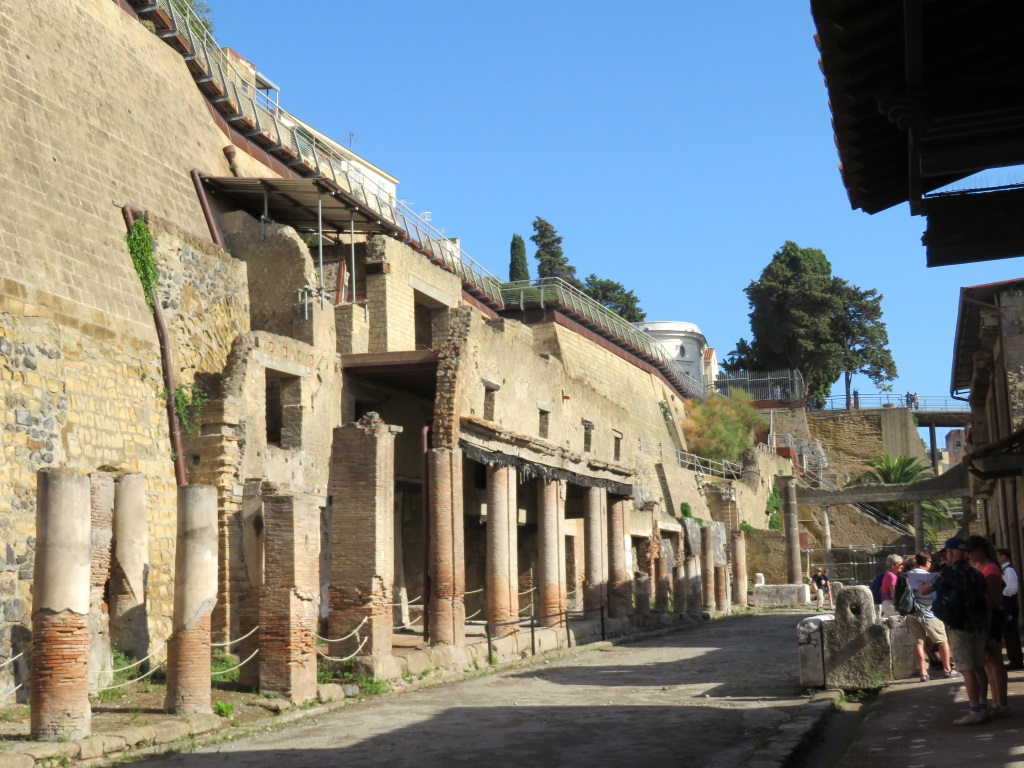 There are plenty of other advising trippers out there who can act as visual content providers for every single building here. No, there's curiousity at the crowd downstairs who were clocked on the way in. 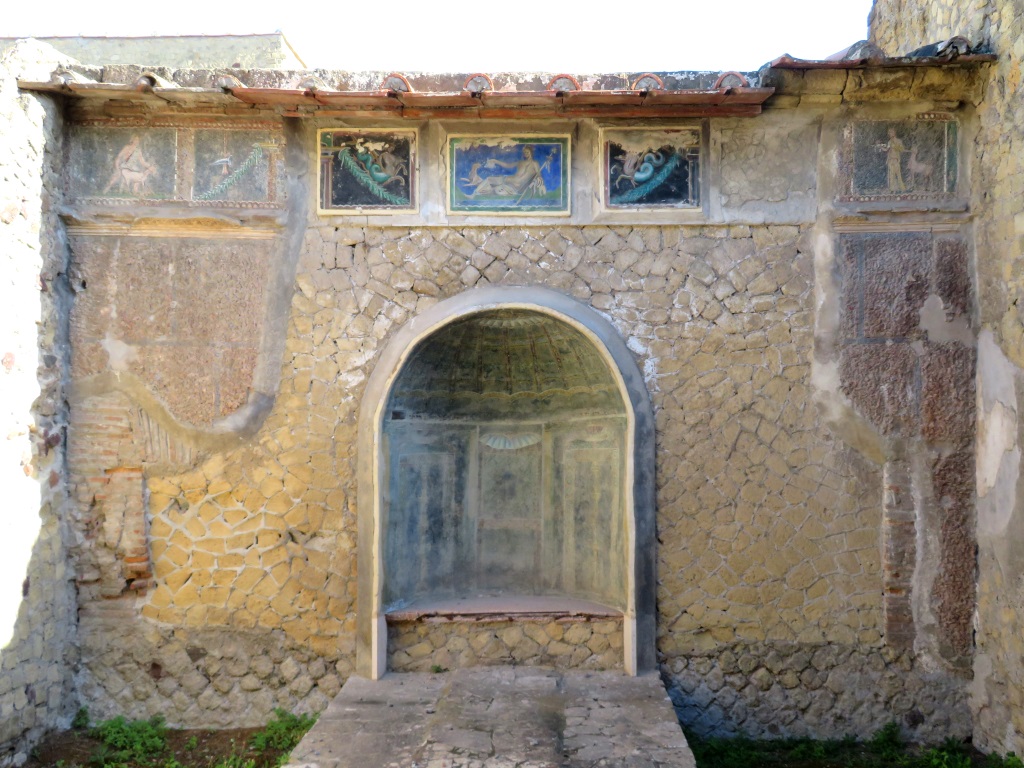 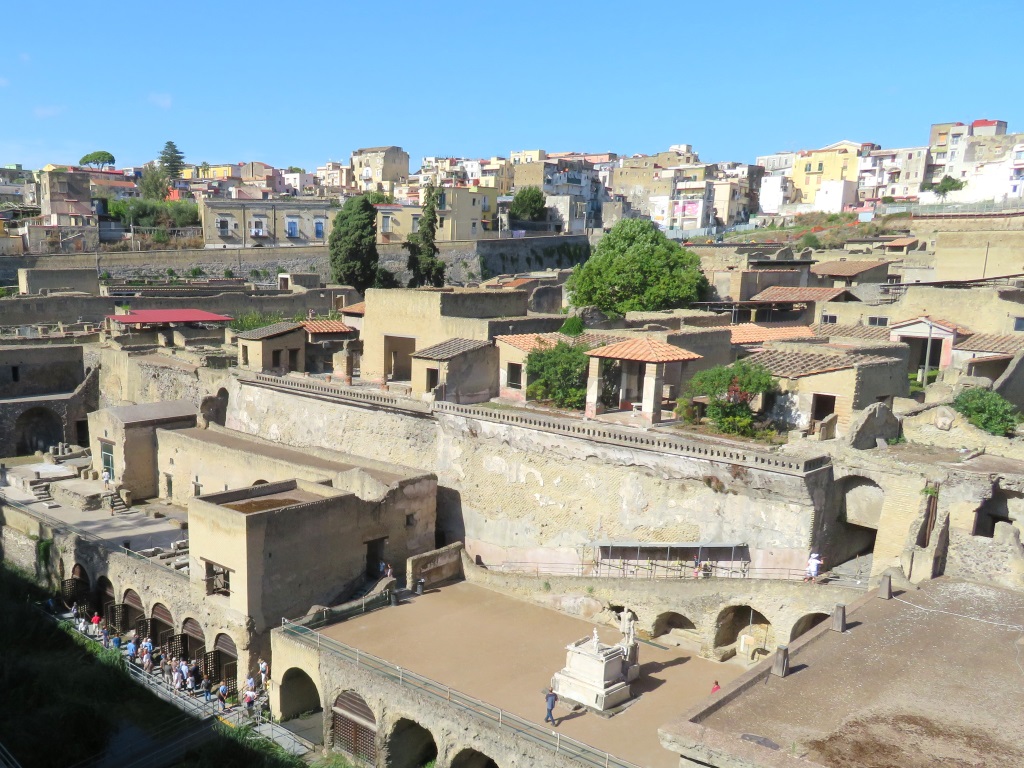 When it's said 'crowd', it's now known they're ghouls because those are the boathouses that contain some of the skeletons of some 300 men, women and children. This used to be the sea, you see, and while waiting to evacuate, they were fried alive by the pyroclastic blast.

Cheery stuff, for sure, but it felt a little insensitive to take a photograph. It isn't thought that a weeping lady was directly related to those inside but a more recent reminder for her of mortality, perhaps?

A chubby 10-year old, oblivious to this, was getting some much-needed exercise by racing around in the roped off areas. His inner voice is just shouting 'LOOK AT ME! LOOK AT ME!' but there's no parental rebuke and this a UNESCO World Heritage Site sunshine!

'Pack it in or you're going in with the skeletons!'

Quite a few cafés here seem to have taken the name of the mount but this one's on the main street down from the train station. Unassuming and easy to miss but some of the best gelato that's been had this trip. 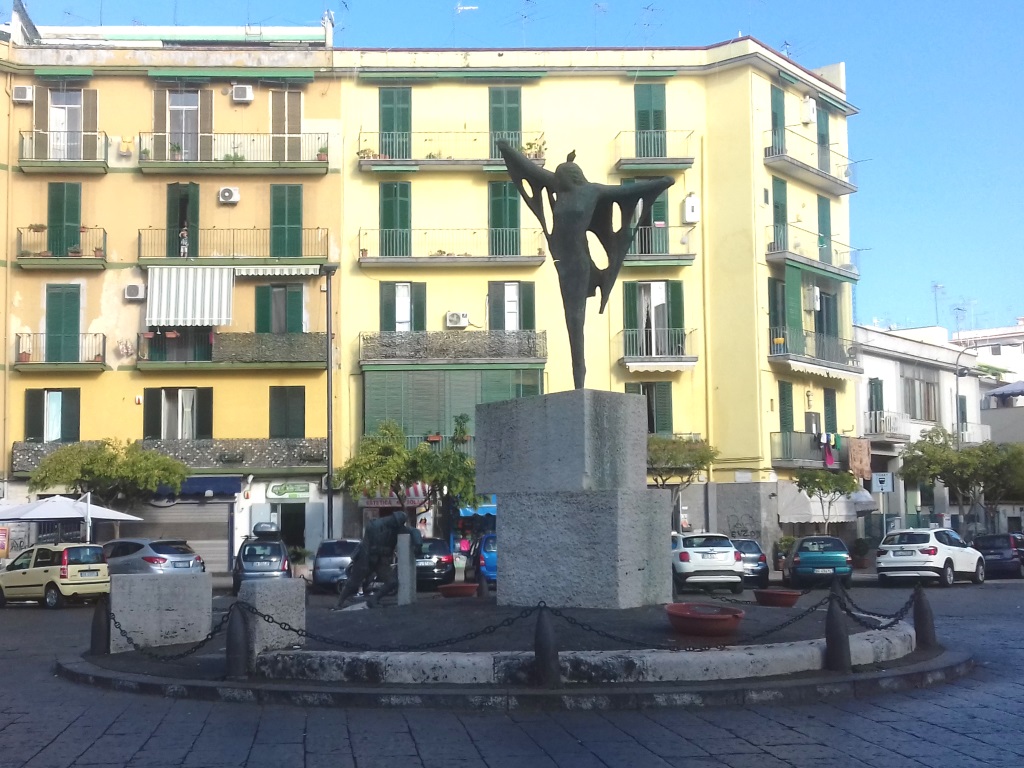 The town itself is worth a look since they've made a bit of an effort for the constant stream down from the train. There's almost a resort feel to it even if the sea is a 1/3rd of a mile further away than it was in 79 AD.

Despite being 4,000 foot high and an active volcano to boot, you can drive up all but 600 foot of it. Be that by your own diesel, bus or taxi, you'll need to do the rest on foot and, from memory, just looks like someone has flicked a fag-end into a quarry. 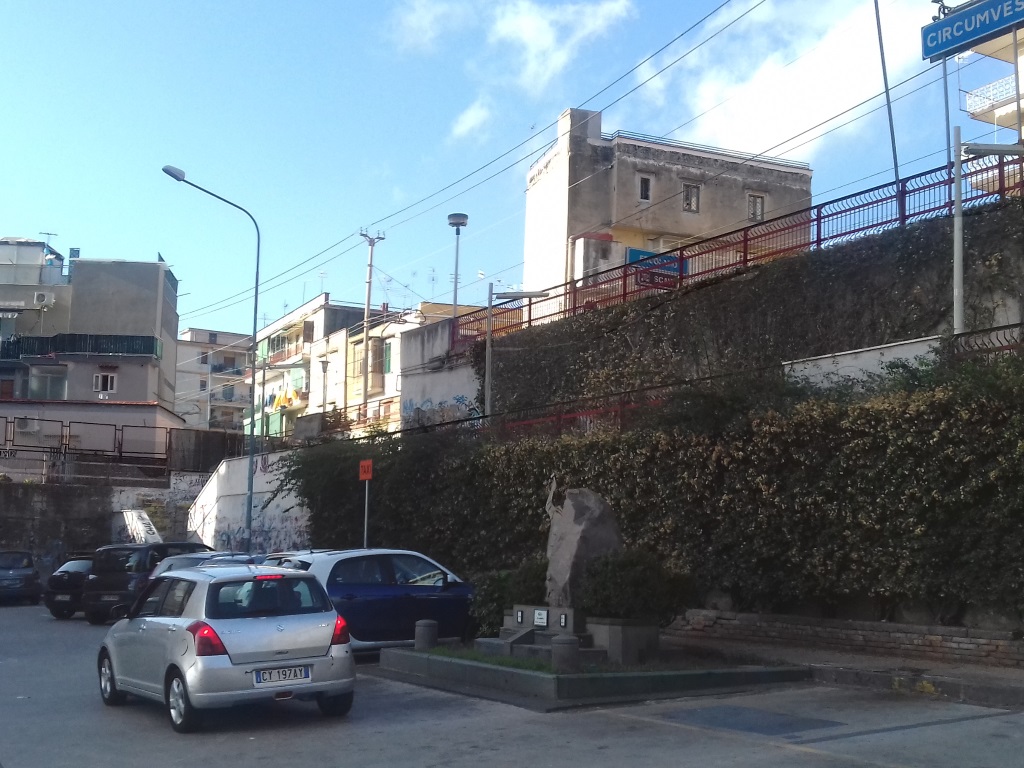 There are taxis from the train station who'll happily wait a couple of hours once you're up and who'll do a small discount on the entrance fee to the top.