That inadvertent, wrong left turn isn't necessarily a bad thing because there's a newish multi-storey behind the train station that not too many seem to have cottoned on to, just yet.

Somewhere else further south beckons but the short hop to the high street still leaves time for some Dickensian diversions and evidence that King Henry the whoever clearly had a head for heights.

It's over the A2 for the high street via the back of Rochester's Visitor Centre, which, it has to be said, looks a lot better from the front. 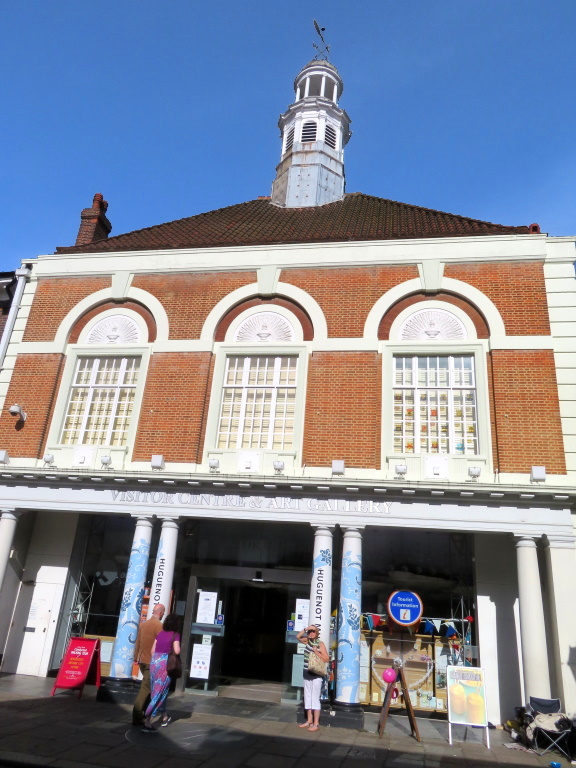 Upstairs is home to a Huguenot Museum, the only one in Britain, no less, Kent being the first port of call for many fleeing from France in the late 17th century.

Frowned upon for their shabby sense of dress and for speaking in a tongue not fully understood, it's not thought the Huguenots fared much better here.

Nigh on 100,000 exiled Protestants made their way across the channel and the French Hospital was founded in London in 1718. Not just to heal but to help those with largely empty pockets, La Providence relocated to a cul-de-sac just off the high street in 1959. Their almshouses still support those without much in the form of life savings so long as the old lineage checks out as legitimate.

Turning right, it's an eye-catching introduction with most of the monarchs worthy of a mention, architectural-wise. Elizabethan-era Tudor through all the Georgians to the inevitable Vic but some idiot has only forgotten to charge the Fitbit™ and if only there was some way to check how the time is ticking along?

Twentieth-century representation is provided by Pizza Express™ but back in the late seventeenth, the old Guildhall will let you in and up for free. 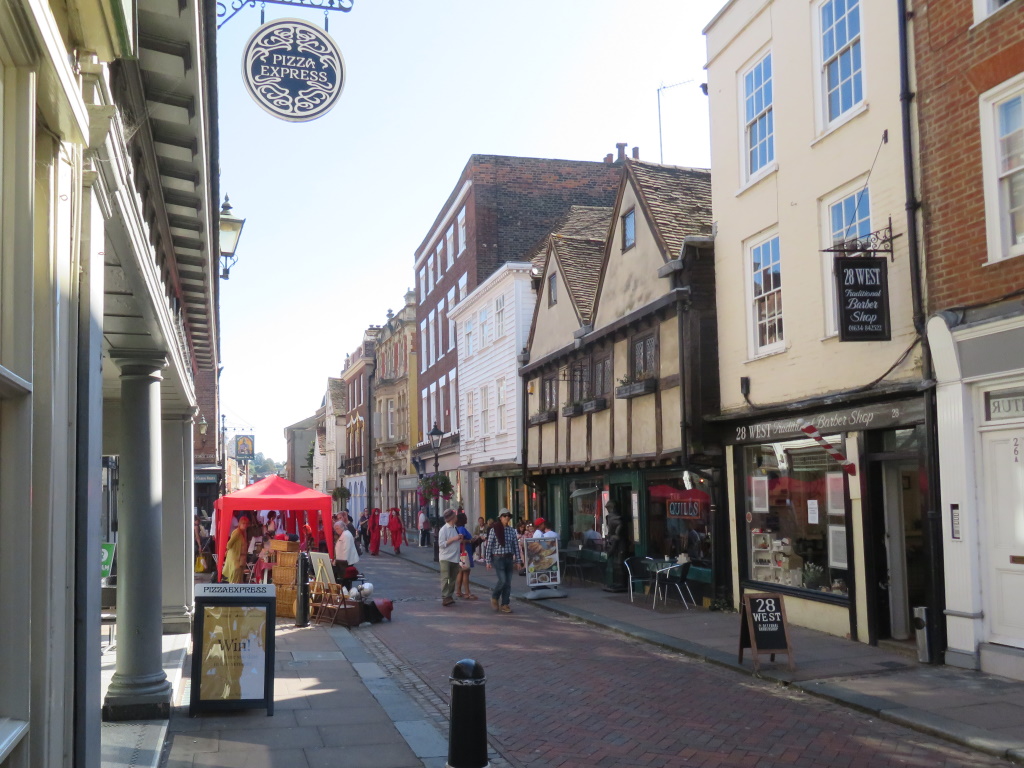 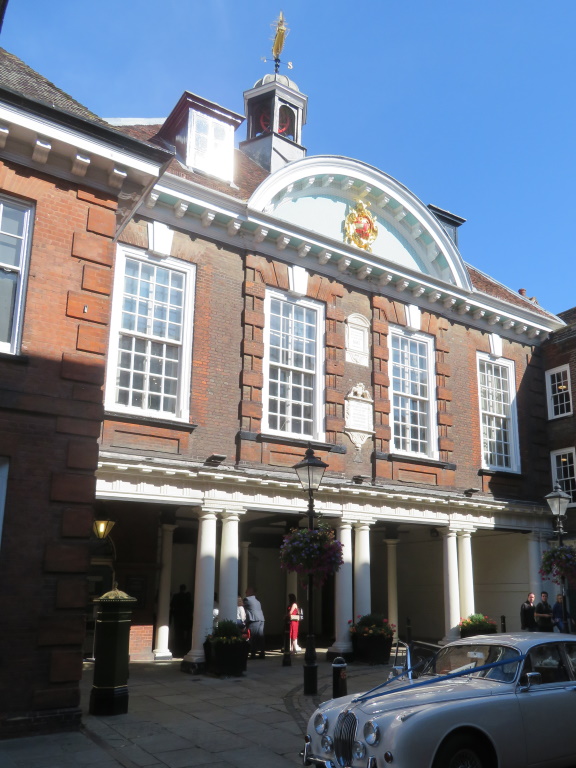 There's access to the ornately furnished main hall unless there's a wedding on and who on earth comes down the aisle to the strains of The Cure?

It was, in fairness, one of their  poppier numbers but the highlight of this small museum of local history is the recreation of a prison hulk. Several of these decommissioned ships were moored up in the estuary and acted more HMP than HMS well into the 19th century.

An imaginative use of mirrors makes it look bigger than it is and the thought of these hulks is, well, incredible. Cramped conditions and sub-standard rations, Pizza Express™ really need to up their game to compete with those new, authentic Neapolitan-claiming independents, eh?

That's quite enough switcheroo-ing, for now, but a left turn is required when the high street runs out. The leisurely area of The Esplanade is right on the river, that being the River Medway, of course. 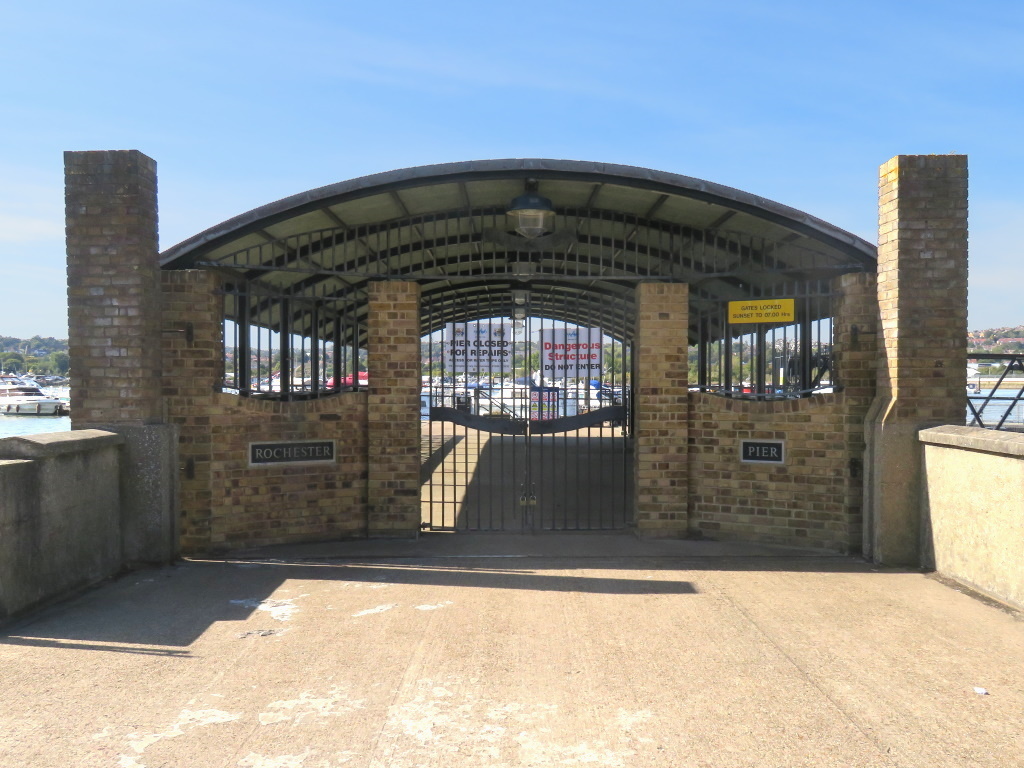 Not that you'll be accessing it via the pier since it's been declared dangerously unsafe, again, apparently. That's not unlike the river that's well on the way to being the Thames and is tremendously tidal to boot.

The wall behind advertises its Roman roots but the plaque is stamped with the 'City of Rochester', the City of Rochester? That's not a Pointless answer, no more, but it could still be if only somebody hadn't forgotten to fill out the forms. 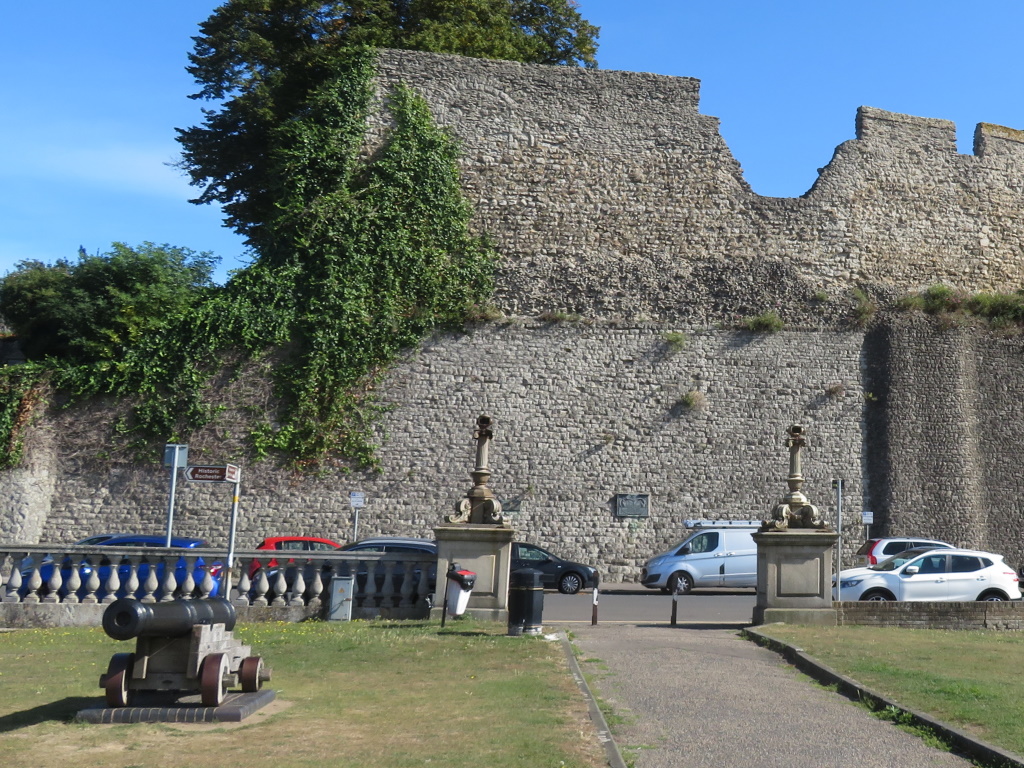 In 1227, Henry III granted city status when it was nothing more than all fields round here. It's now just part of a much bigger, built-up area, really, and along with Strood, Chatham and Gillingham, mainly, make up what are collectively known as the Medway Towns.

Historic city status was retained in 1974 when the Borough of Medway was cobbled together and ditto in 1982 with the City of Rochester upon Medway. In 1998, however, the unitary authority of Medway Council, whatever that is exactly, saw the application overlooked and it looks like there's no way back.

Don't get the City of Rochester Society started on that and it's an administrative oversight on a par with when that fella said... 'Guitar groups are on their way out, Mr Epstein.'

There's no point pretending that Rochester might have a castle because this one can be seen from the moon, probably. Over 110 foot high, English Heritage™ will let you in for 'free' if you too were so beguiled by Belsay to sign up.

That means it's straight to the top of Henry I's handiwork for some dead pigeons on a net, not shown, but, not unsurprisingly, nice views from up here.

There's the River Medway in full flow and a better idea, if you look closely, of the four bridges over to Strood but it's all very, very borderline for these wobblies and yes, that'll be the old vertigo. What's largely left is the original Norman brickwork and it's remarkably intact given the age. That and what happened in 1215 and you might want to pull up a chair...

Following some post-Magna Carta nonsense, a rebellious bunch of barons stormed the gates or rather their henchmen did. King John was obliged to lay siege but the squatters had pulled up the drawbridge and, really rather rudely, refused to answer the door.

No problem, dig below the outer wall and fill with 40 slaughtered pigs, their fatty flesh perfect fuel for a fire. It managed to bring some of the house down but the rebels resisted for another two months until they were eventually starved out. That's somewhat surprising to hear because the crackling must have smelled fantastic?

Rochester is being greedy as far as big old buildings of interest go and the cathedral is a reminder of its former city status. There's been one on this site since the six hundreds although the oldest parts are more Norman than Saxon with the spire as recent as 1904. 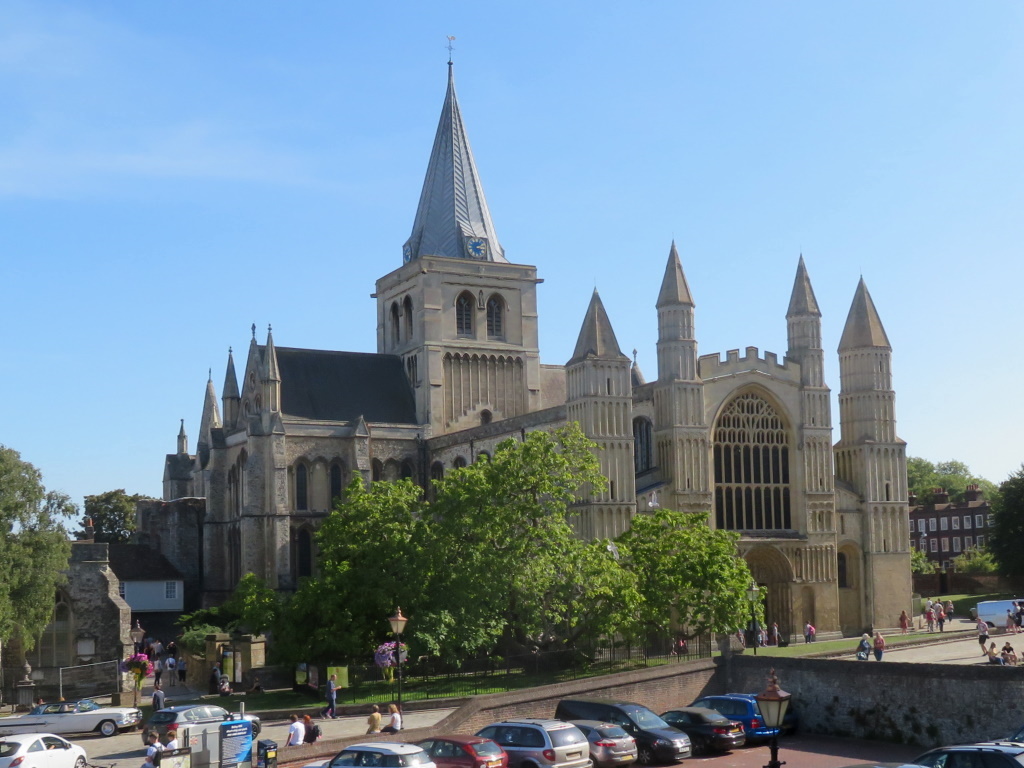 Not wishing to diminish centuries of elaborate construction, it looks like standard cathedral fayre in there with an ever so slightly disappointing wooden ceiling, not shown.

Advising trippers are far more praising but that's at the full treatment and there's no access beyond the narthex today thanks to some afternoon service or other.

The grounds are free to wander around and today they're home to the Knife Angel, a striking piece of sculpture made from thousands of blunted blades handed over in amnesty. 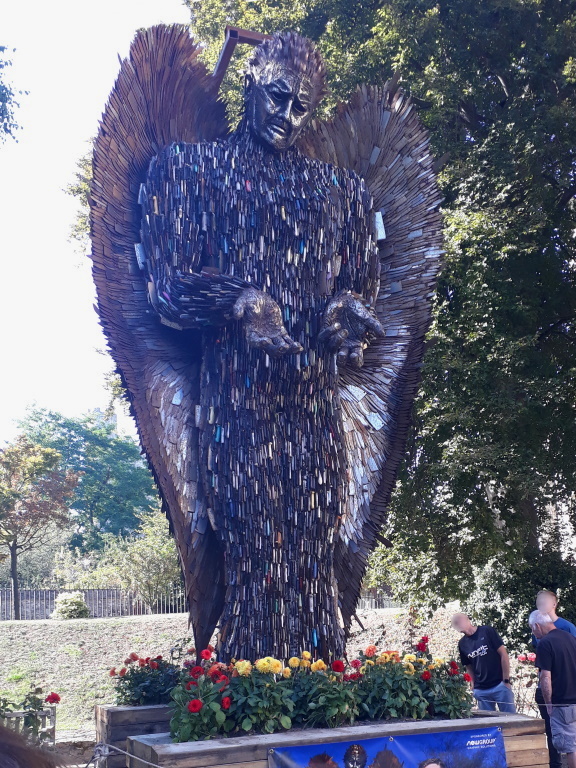 It's quite a piece of work and tours the country raising awareness and campaigning against the epidemic of knife crime in the UK so what three middle-aged selfie-takers from the US found so funny still isn't known.

It's hipster coffee and homemade cake time and if the trendy interior is proving too popular, today, you can hang out with the cool kids on the cathedral's grass.

The Rochester Coffee Co, three doors down, claims the best coffee in town but they've got some competition here and not everywhere gets a 'Good coffee, see ya!' on the way out.

That includes the Costa™s just up the road, probably, like there weren't enough options on the high street?

Mr. Rochester, you must neither expect nor exact anything celestial of me...

So wrote Charles Dickens in his famous novel Jane Austen or something, which is about the extent of this Eng Lit flunker's knowledge in this area.

What is known, for sure, is that Charlie D grew up in these parts although Chatham can lay more claim to being his playground but, back on the high street, boy are they banging on about it. 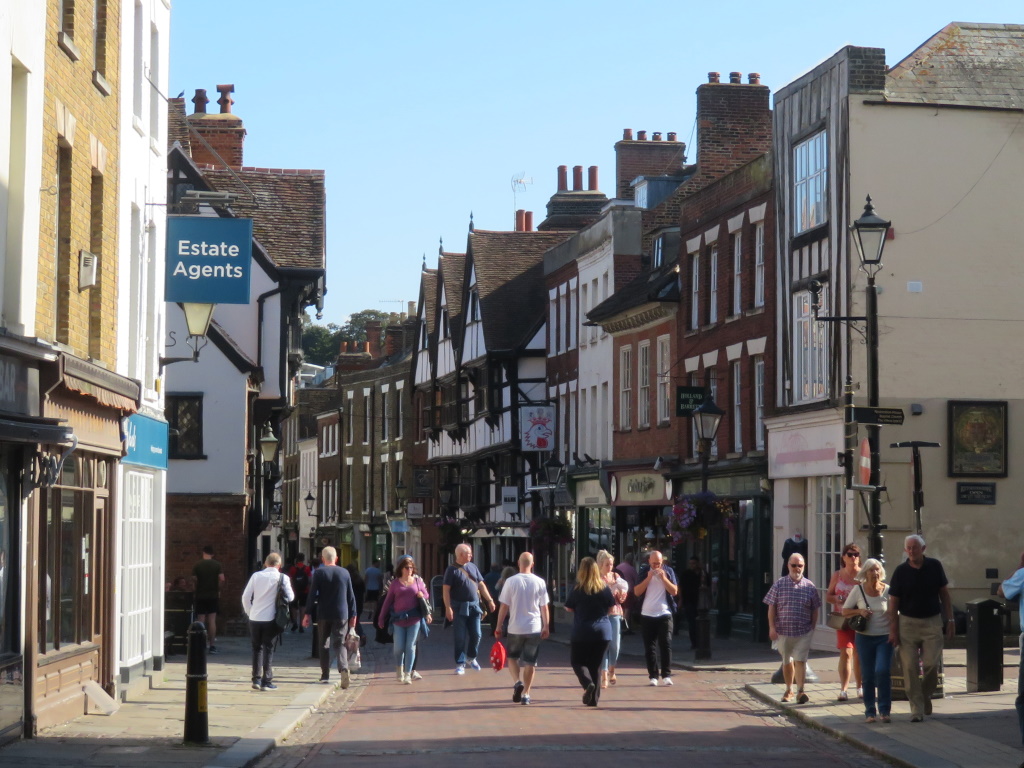 Along this impressive stretch, fine work by the owners of a Taste of Two Cities, RIP, but the New Age operators of an old curiosity shop, Little Dorrit, seem to have missed the punning point.

A wedding-free Guildhall is said to be the workplace of the young apprentice Pip in Great Expectations and Eastgate House is the inspiration for both Nuns House in Edwin Drood and Westgate House of Pickwick Papers[1] fame. This Elizabethan mansion was built by the 'Right Worshipful' Sir Peter Buck in 1590 with the knighthood awarded for his  earlier work, which everyone knows was generally better.

Meanwhile, back near the car, the new multi-storey is part of a larger project that's looking to regenerate 'Rochester Riverside' into a destination.

All of this '80s-looking block of bleak housing is already sold and one of the old cranes is now surrounded by something rather smarter-looking and residential that'll be nice when it's all fully finished. 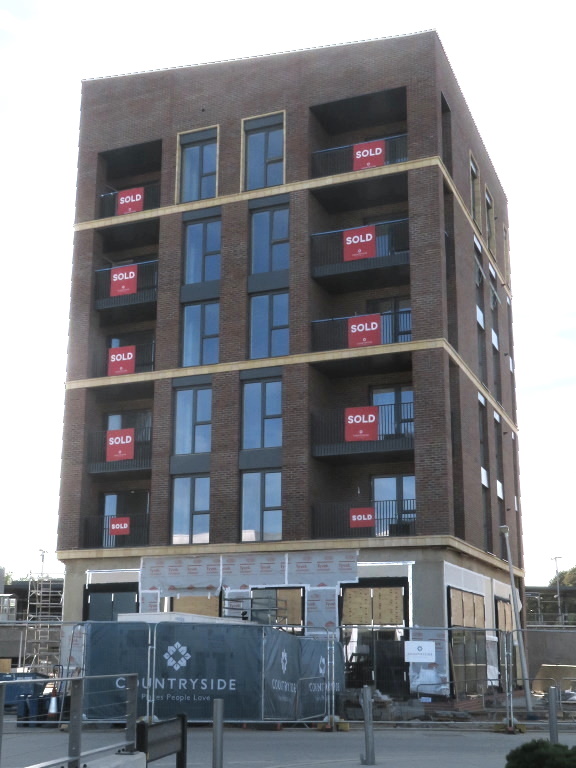 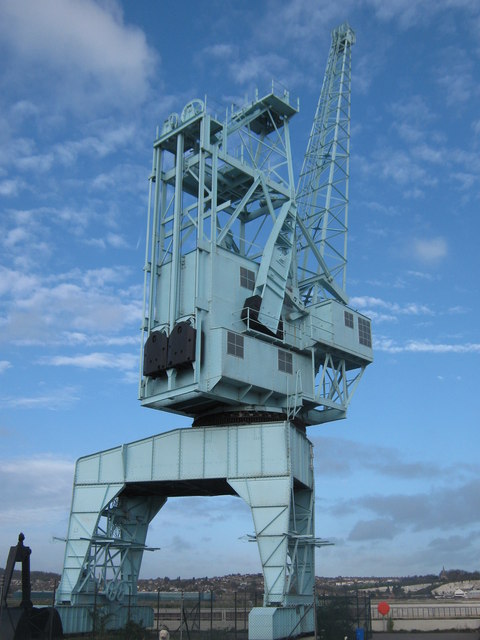 The crane is a clue to the industry of the old riverside and a pair of 'creeks' have even been left to run wild for the wildlife. 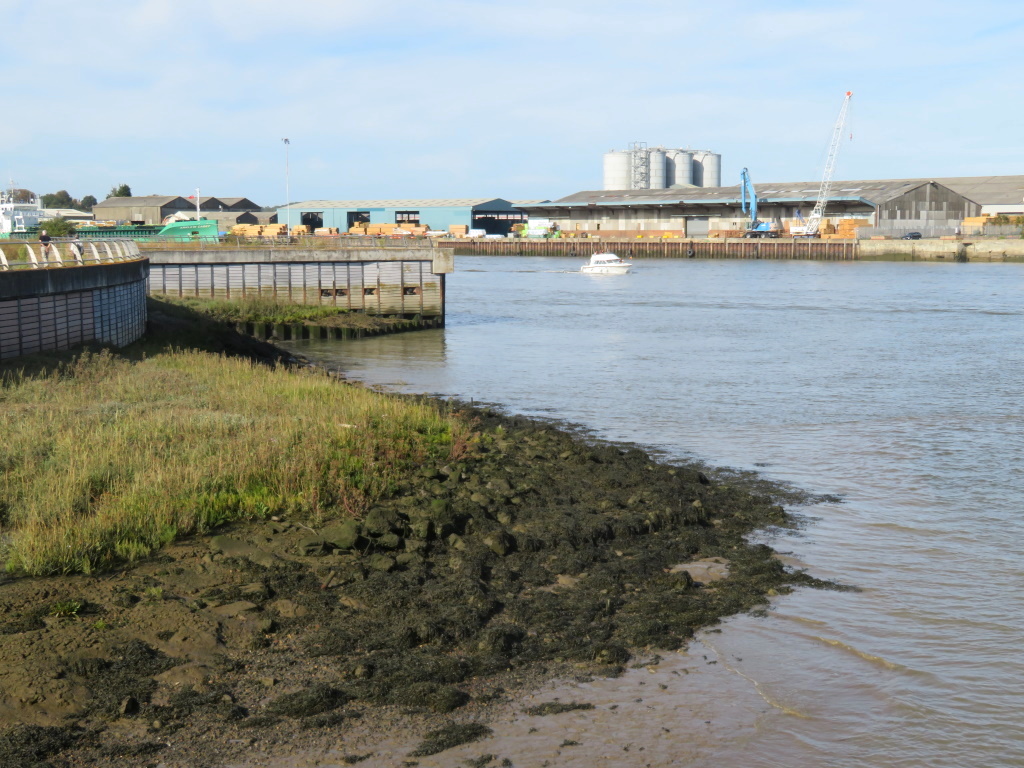 The problem with such developments, however, is often a lack of local amenities for when, for example, you've forgotten that pint of milk.

There's an ideal opportunity therefore and, as is now known, a readily available name for that new newsagents, surely?