No, not that Sunderland, silly! This one's on a peninsula in Lancashire and only accessible when the tide's oot.

Isolated and desolate, Sunderland is the North East's second-largest city but, switcheroo-ing back, that tidal fact makes this one a place of interest, perhaps?

Tide waits for no man so, having checked the tables, there's a window of opportunity for a coastal stroll and the first use of the word 'anachronism' for a very long time, if ever!

Parking is a shingle bank at the end of, what's now known to be, a causeway. It's so remote, Google™ Street View hasn't even been here, yet, but they've laid on some lavs for your convenience, not shown. 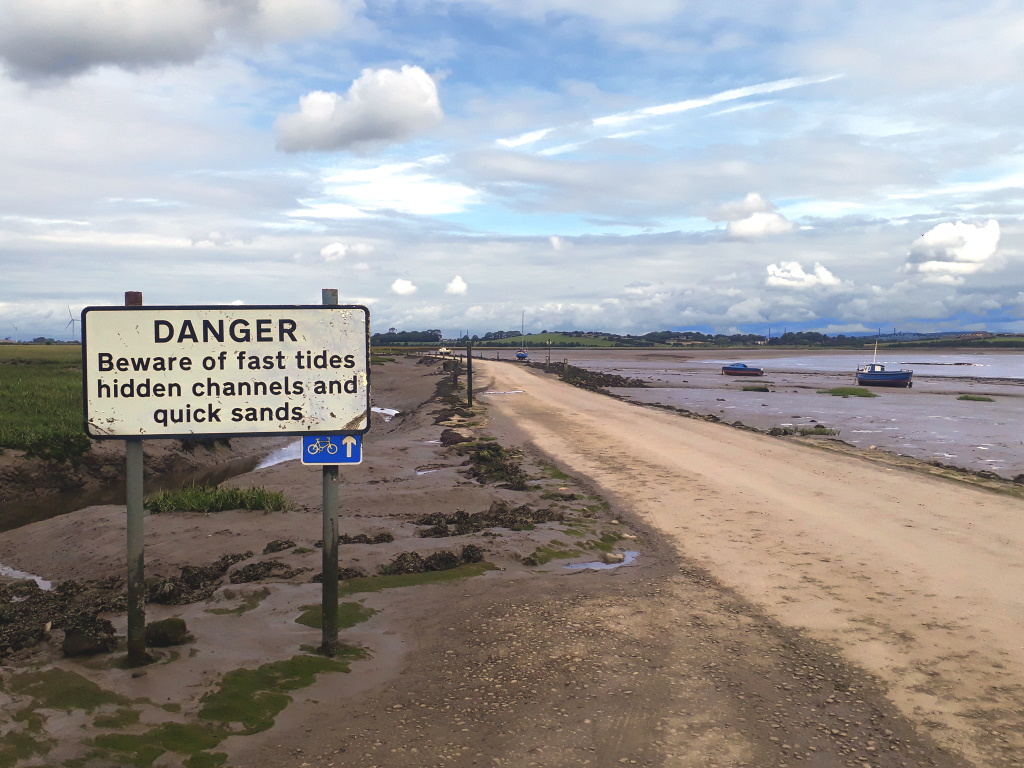 That's your lot, however, facility-wise so you might want to bring a sandwich. There's a chance of getting stranded, you see, but more on that in a minute.

Unless you're here with the fisherfolk, for whom this appears to be a destination, the only option is a wander up the private road that's not nearly so private as it thinks. 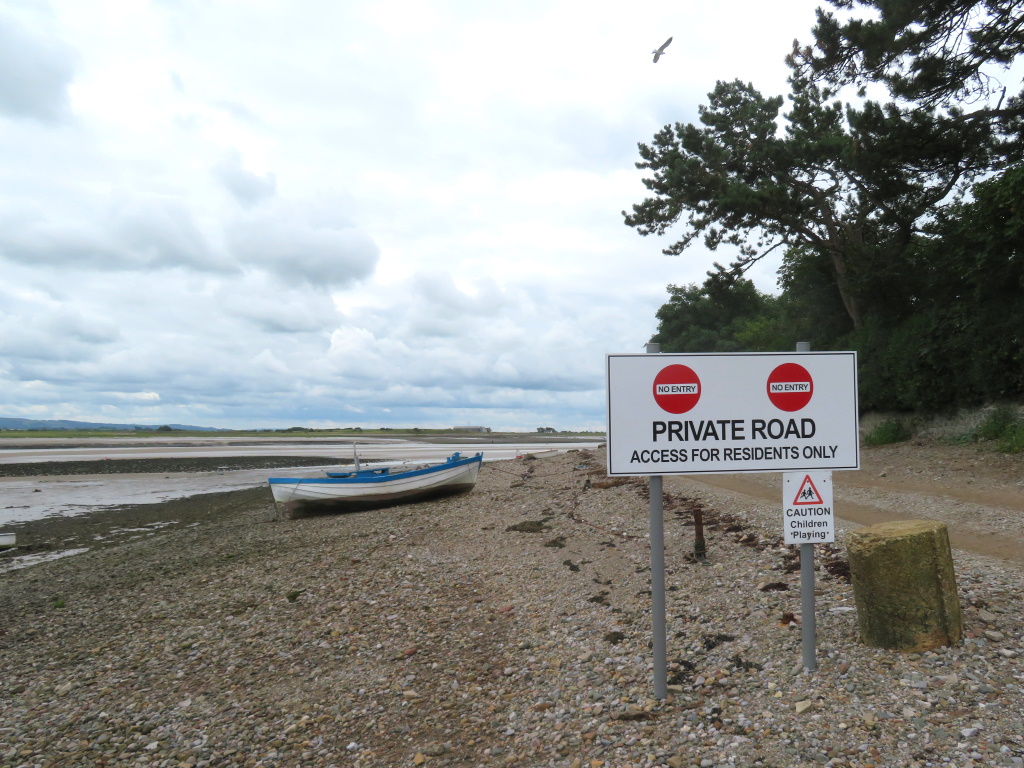 Still, nice views to the mainland over the River Lune and you'd have to be one to venture too close. What's looks no more than a muddy channel now, the levels rise alarmingly and the fisherfolk are a clue that the tide is on the turn but more on that in a minute.

Local artist Ray Schofield is remembered fondly with one of his sculptures and the backdrop is apt for his nature-loving nature. 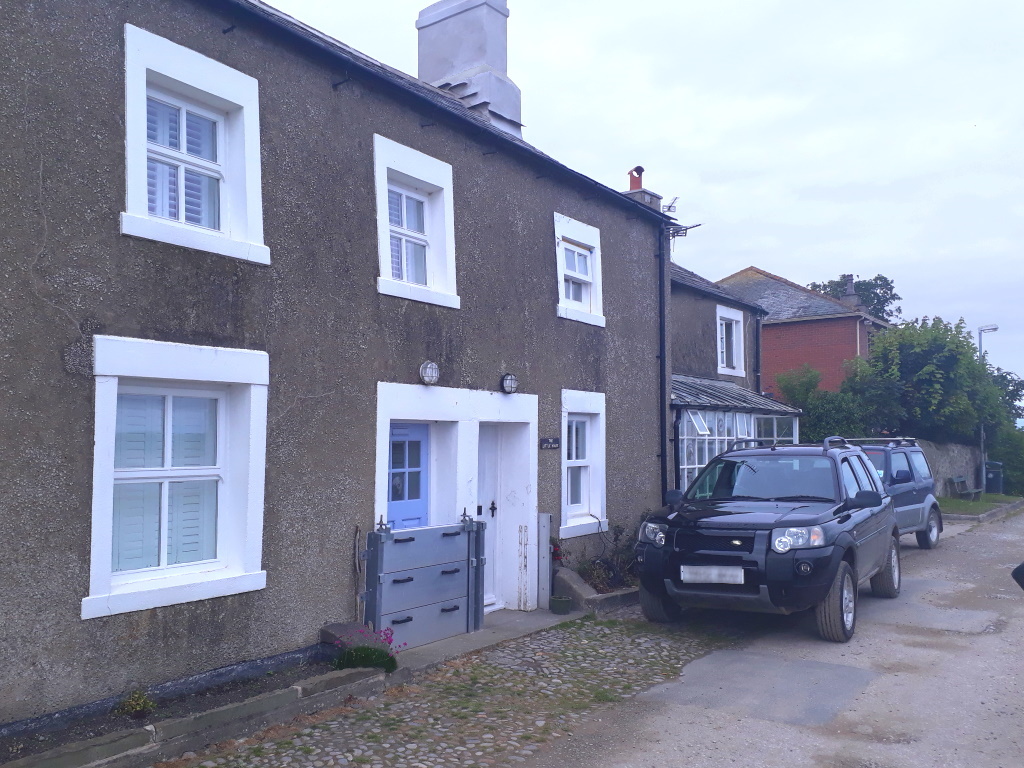 He lived just behind in First Terrace, the first row of the residential reached, so yes, people do decide to live here. They're all fitted with floodgates, another reminder of the tide, but back in the early 18th century, they were largely amenities for the mercantile.

A thriving port was Lancaster at the time and the big ships had to wait here until it was deep enough to get to, you see. Sunderland was awash with cries of 'Anchors Aweigh!' and it was all 'Yo ho ho's and bottles of rum in the fleshpots on the quay, probably.

If you thought First Terrace was unimaginatively named, turn right up 'The Lane' to head west across the peninsula. 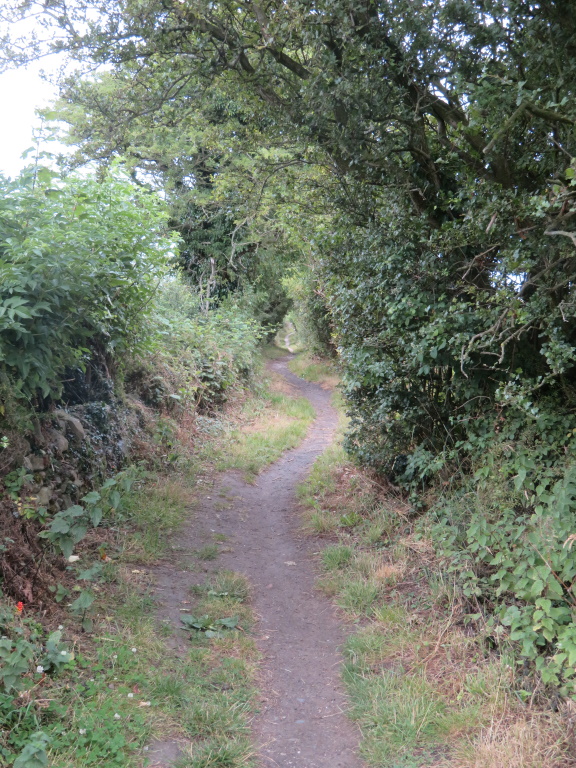 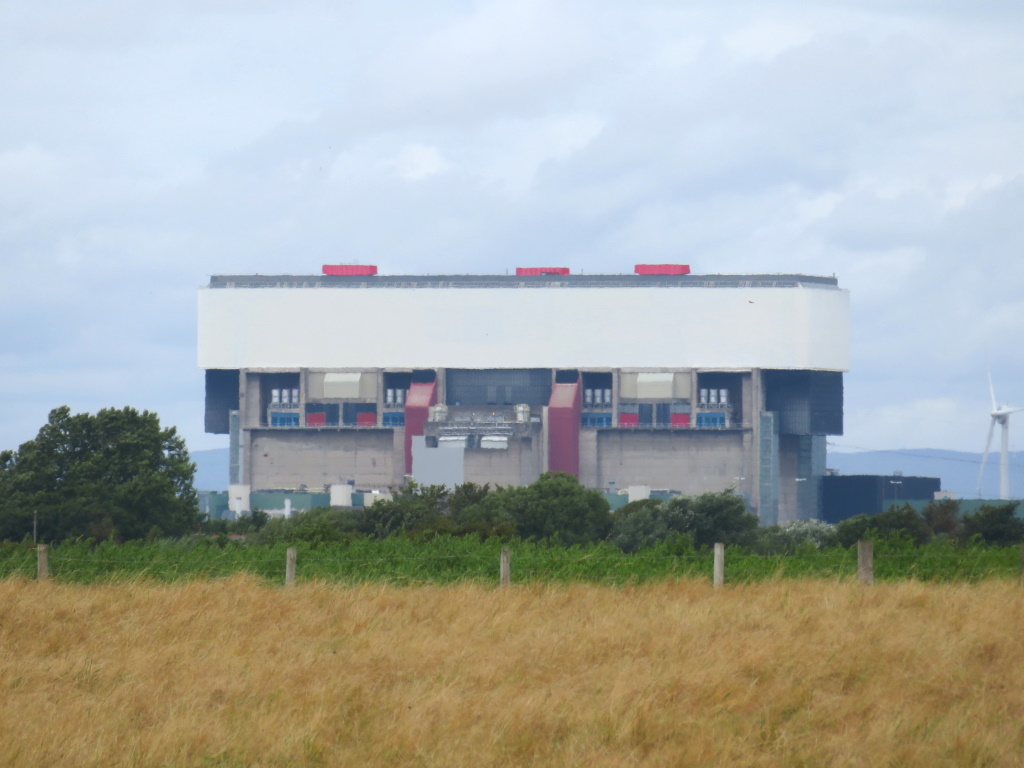 Passing the church, not shown, things are wonderfully overgrown before a hint of the Nuclear Power Plant up at Heysham.

With the sea now in sight, some fine, recent work by the Friends of Sunderland Point in the form of a new wildlife hide for the waders, when in season, and that's not all... 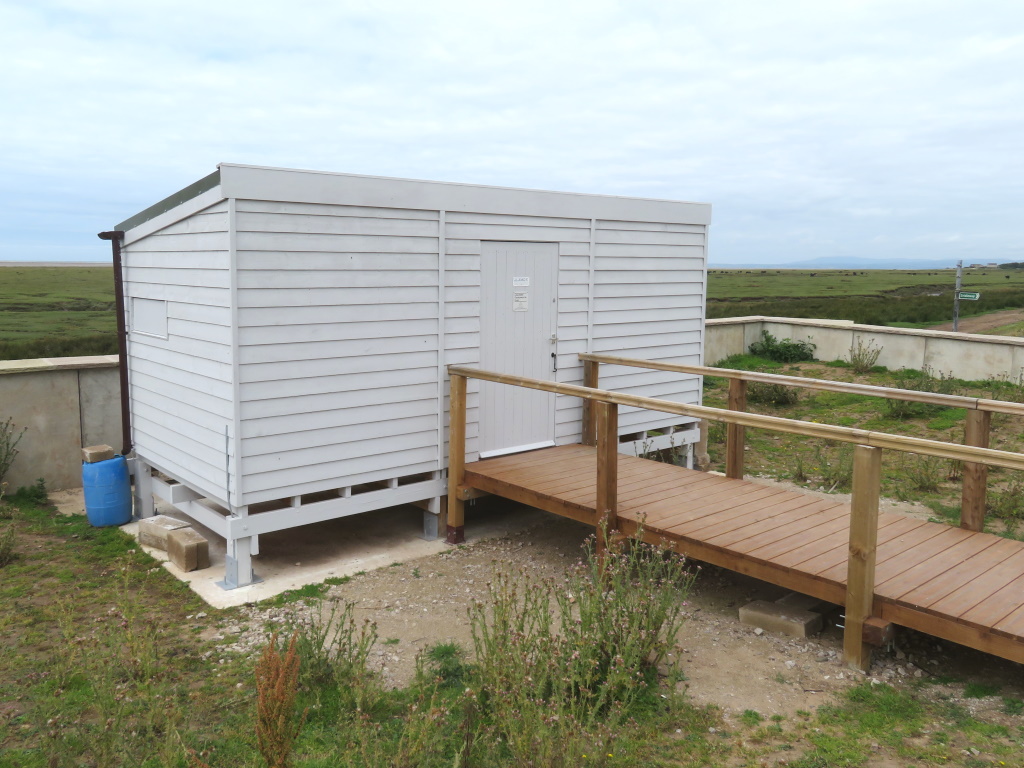 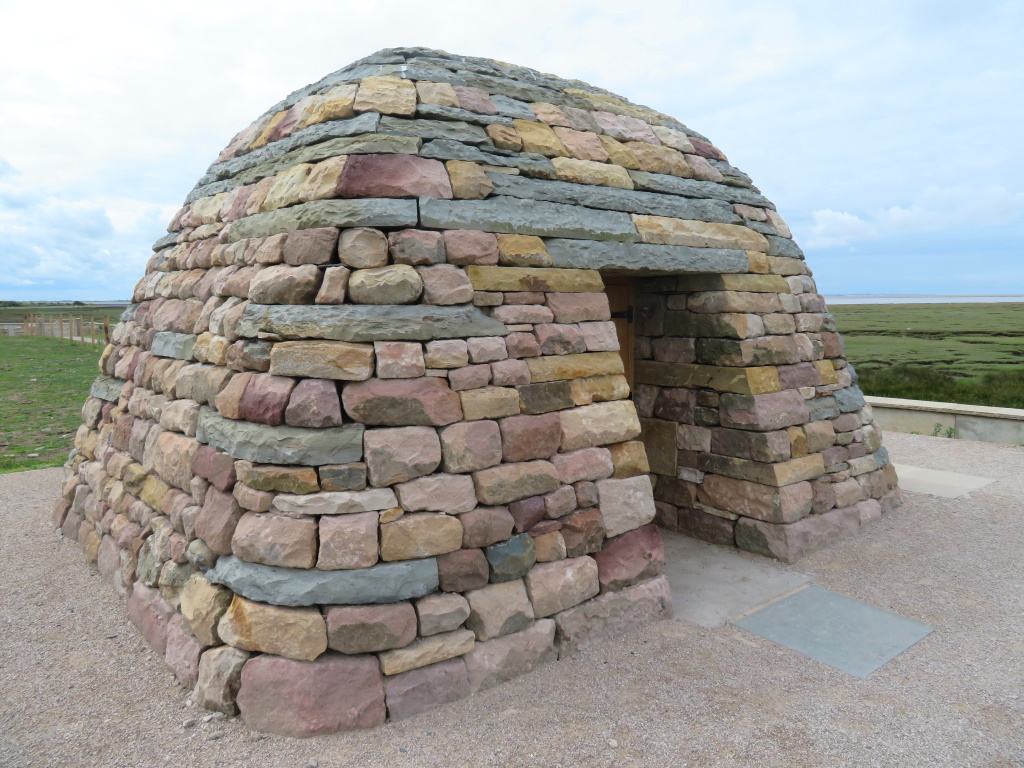 The Celtic-looking roundhouse could be a crannog or it might be a broch but it's none of those, actually, rather a camera obscura, obviously.

Artist Chris Drury may have had a helping hand with the eye-catching stonework but it was his idea to project the big horizon onto the whitewashed walls inside and with that door fully shut, it ain't half dark in there.

A little further along the path is the grave of a young employee from Lancashire's thriving import\export trade. 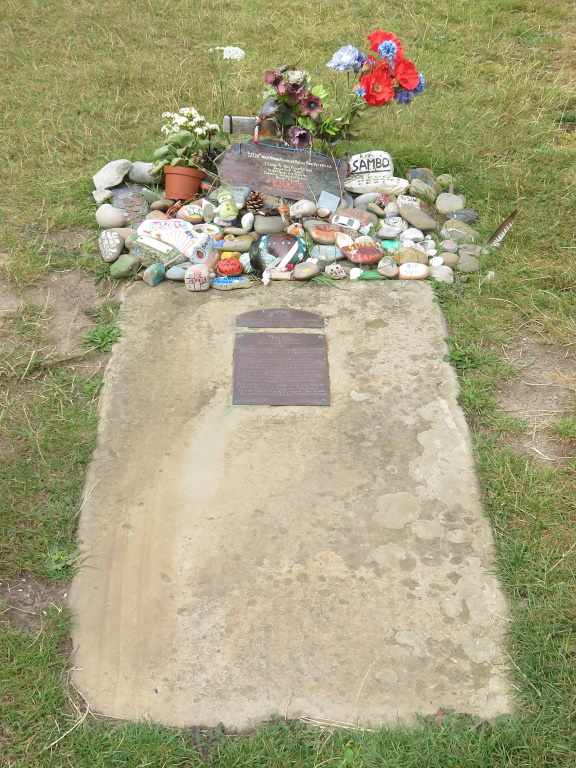 His name isn't known but it wouldn't be too far off to call him Sammo although it actually rhymes with 'mambo'[1] so yes, a 14-year-old African boy enslaved to the captain of a ship! In 1736!

If the romantic image of galleons anchored in the estuary has previously been painted, Lancaster, along with Liverpool, had a bit[2] of history in the slave trade. When his 'master' nipped up the Lune to Lancaster on a business trip, the young lad, fearing abandonment, died after three days of 'a complete state of stupefaction'.

Whether it was really the smallpox or not will never be known but, not qualifying for a church plot, he was buried in unconsecrated ground here next to the shore.

It wasn't until 60 years later that the brother of a leading Lancastrian Quaker-cum-slave trader, really, raised funds for a memorial on his unmarked grave.

It is, at best, what's thought to be called, here you go, an anachronism but shouldn't come as a great surprise since it was signposted back at The Lane. 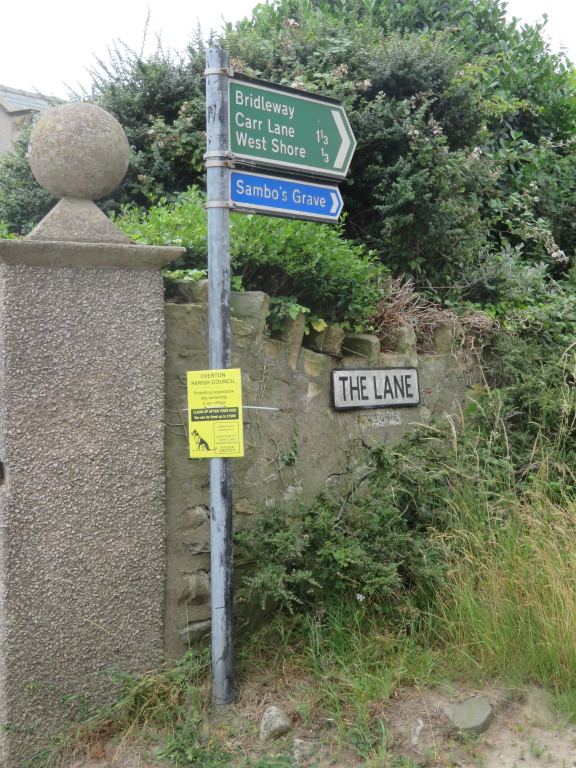 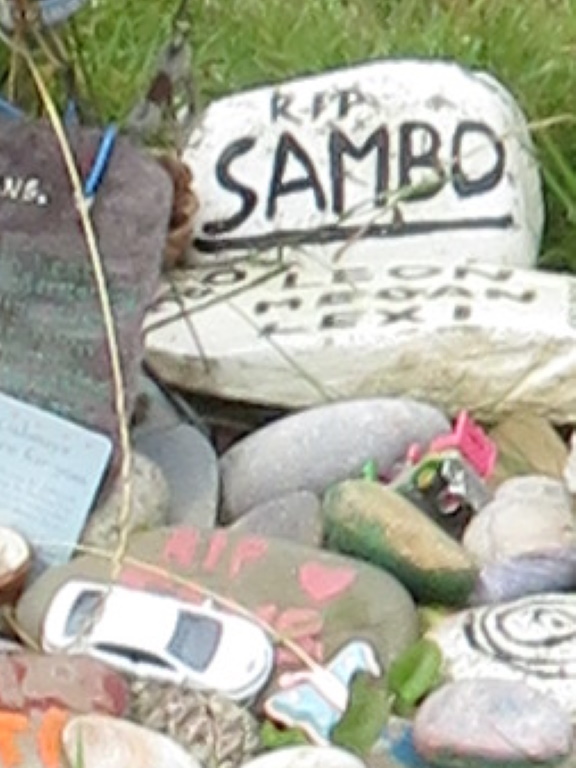 The hand-wringing sentiment is no doubt well intentioned but it's awfully mawkish and was it really necessary to write that on a pebble? Also, somewhere near Sunderland Point, a six-year-old boy wants his little toy car back.

Still shaking your head in slight disbelief, head south to return by the tip of the peninsula. It's captivatingly flat and, strictly speaking, Sunderland Point is the bottommost bit but the village has now come to be known by that name. 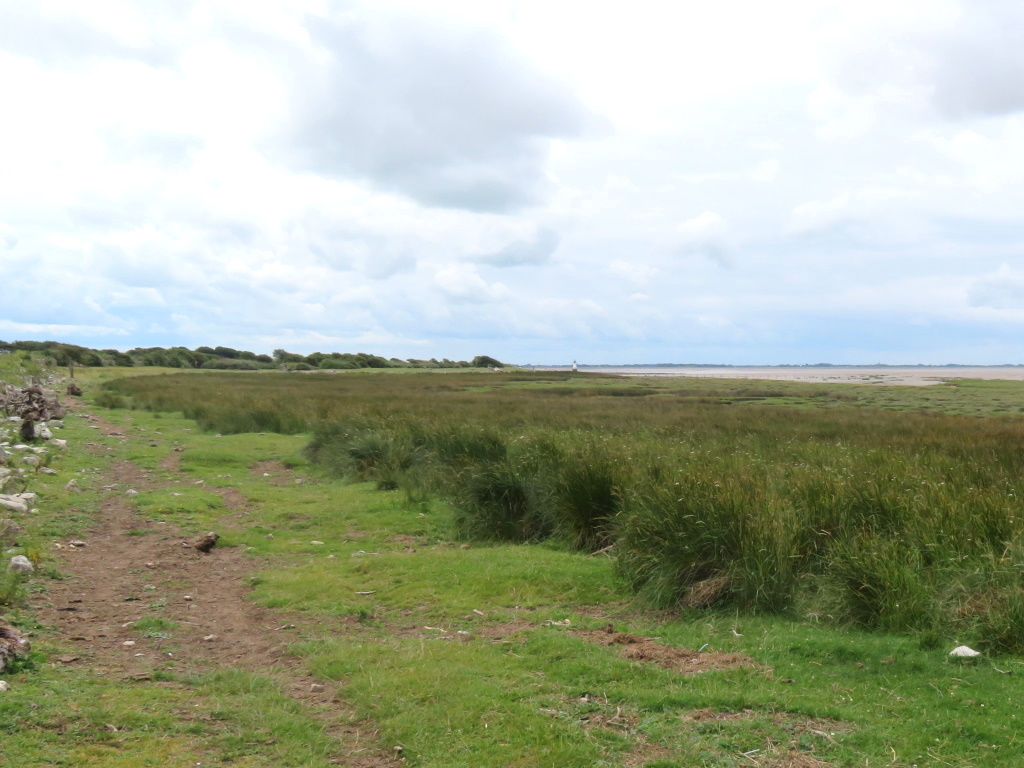 Even strictlier speaking, this is still Morecambe Bay and with the help of some binocs, Blackpool Tower can be seen, seriously. That, however, is only because there's not much else to focus in on, wildlife-wise.

What do you think you're looking at and just the single, as yet unidentified, passerine. 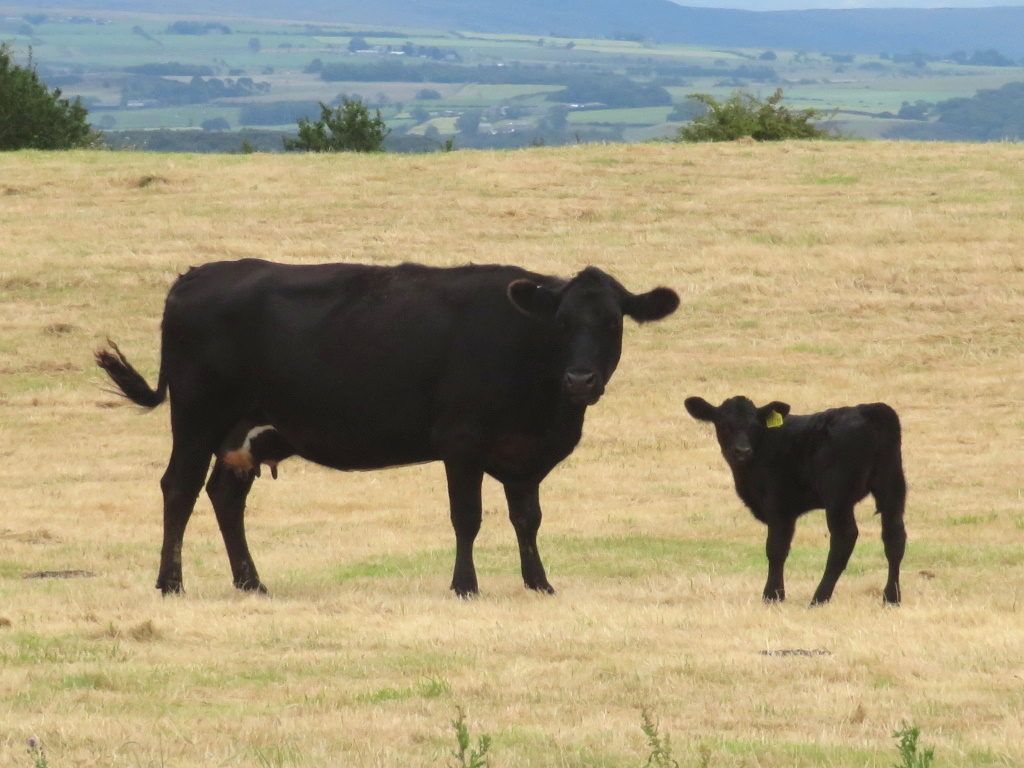 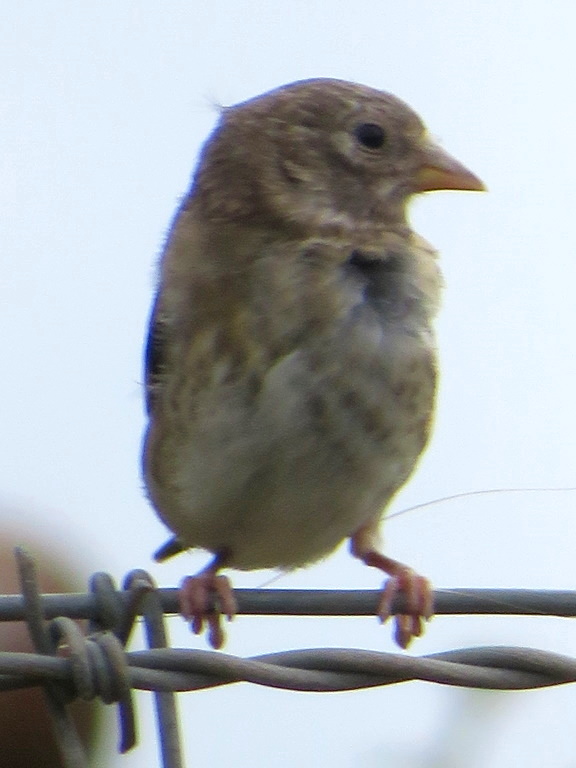 It's probably some form of warbler and undoubtedly not a dunnock. Pipit? Well, the nuthatch definitely does, it's the BMW™ of the bird world.

Heading back up past the mouth of the River Lune, the path isn't exactly clear and might not even be accessible soon. 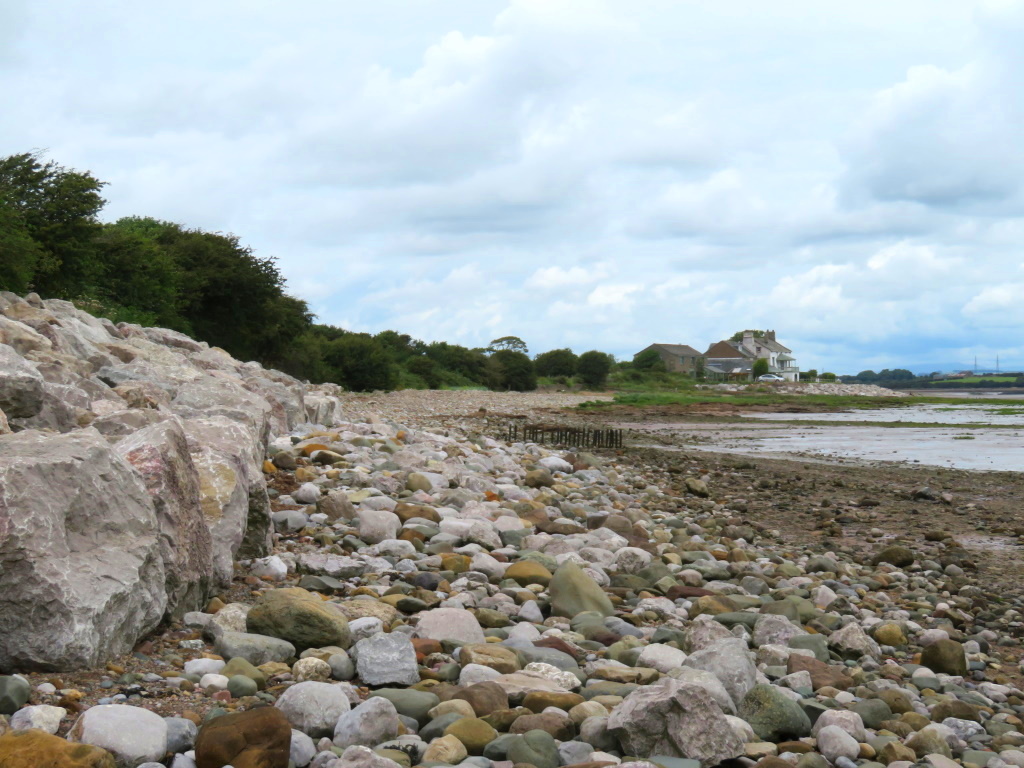 The tide is starting to come in, fast, and a steady flow of fisherfolk are further evidence of that.

Not too much time left, then, to dwell at Sunderland Old Hall, advertising its date of birth as early as 1683. 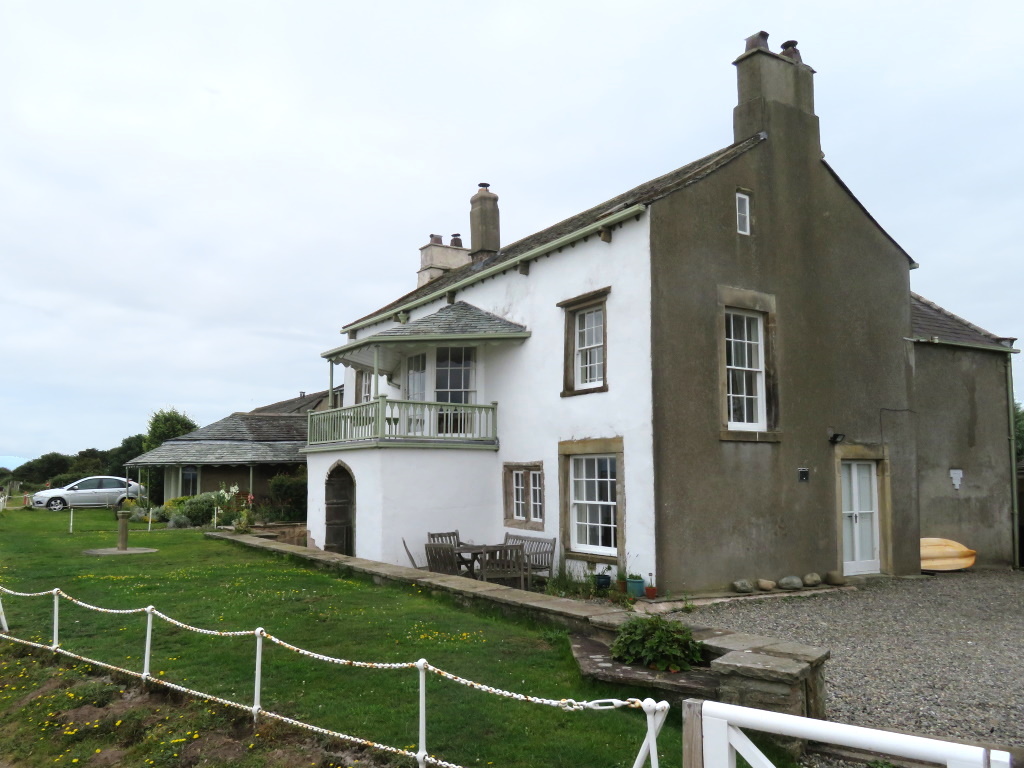 The colonial, West Indian-style balcony, apparently, is a further reminder from earlier so it's slightly more sinister than it initially looks.

Just beyond the Old Hall, a further block of buildings and Second Terrace. Cotton tree cottage is a hint to some local folklore of an arboreal anomaly growing from a seed accidentally carried over from the Americas, they say. 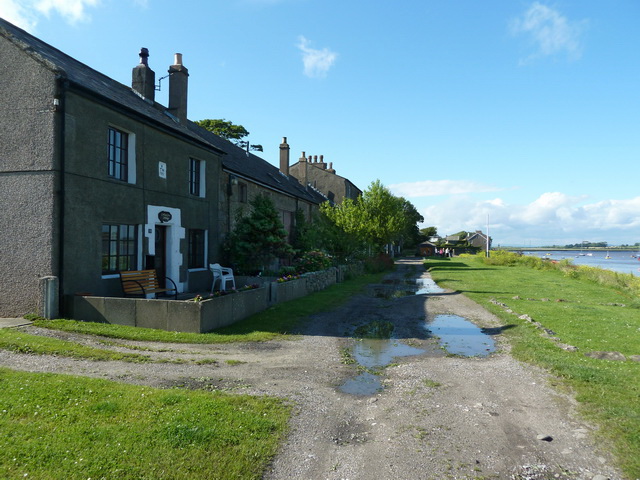 The roots of the rumour are in Lancashire's association with the cotton industry, probably, but the facts are far less fanciful. It's now known to have been a black poplar, a native, albeit scarce, source of wood so that blows that load of fluff of a theory out of the water.

Unlike a great gale in 1998 that blew the tree into the water and all that remains of it now is a stump, not shown.

On the subject of debunking, some may think the opening gambit to this nonsense could be interpreted as a slight against the fine city of Sunderland.

It's not, it's honestly not, even when this fairweather football fan's loose allegiance is taken into consideration. Therefore, in the interests of balance, a further word on Second Terrace...

The single block consists of, say, half a dozen dwellings so, there you go,  six in a row.

Here's some final advice for when you're visiting. You might think you've left enough room for your fellow day-tripper to reverse out but with no purchase on the shingle, the wheels have started to spin and have dug right in. 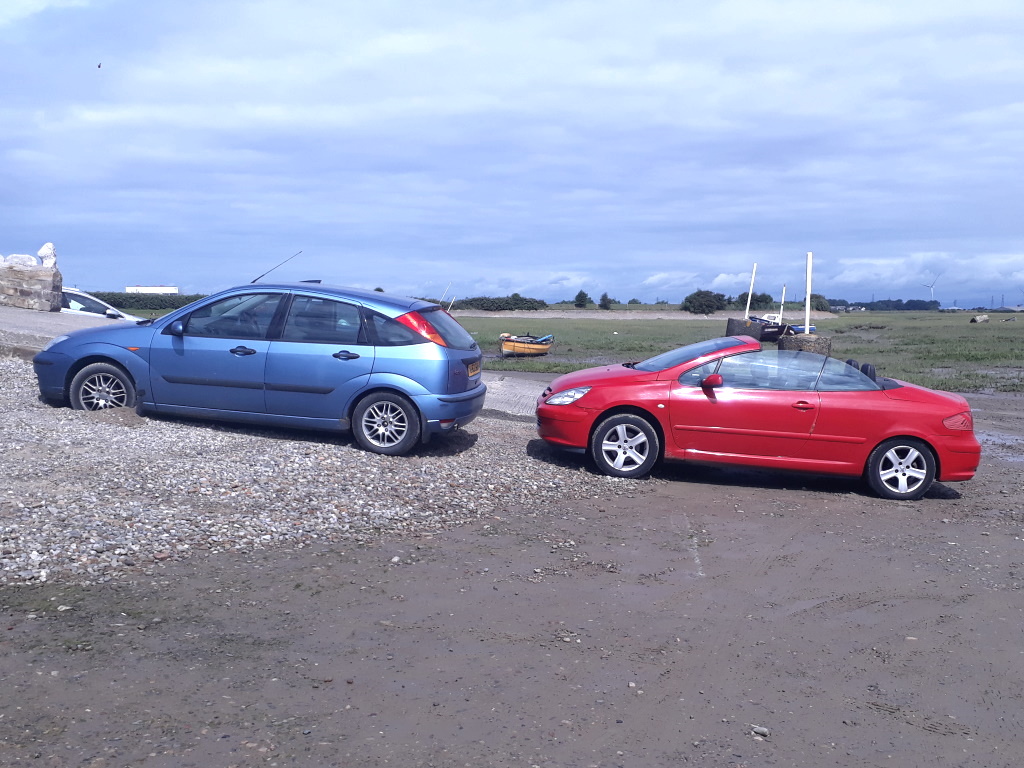 He won't return with the wife and kids for nearly half an hour and that tide's coming in fast, remember?

Through no fault of your own and with just some chewing gum for sustenance, you really might want to bring that sandwich.