Just a handful of quaint, fishing villages on this coastal stretch south of Stonehaven. Too many cliffs, you see, but more on that in a minute. It's a rare haven, alright, but who the heck is John, you not unreasonably ask? Here's the thing, nobody seems to know. He's Dear John, he's John Doe or maybe John was Jane but that simply wouldn't do in the 18th century despite doing her fair share of the heavy lifting, probably.

That would have been baskets of mackerel, definitely, and while you're considering pitching this empowering romp to the BBC™[1] in the Sunday Night, period slot, there's time to check out filming locations and the prospect of some pastry later, mmmm.

With the small lifeboat and local history museum keeping weekend hours only in early May, it's next door to the tearoom for a savoury snack in a bap. 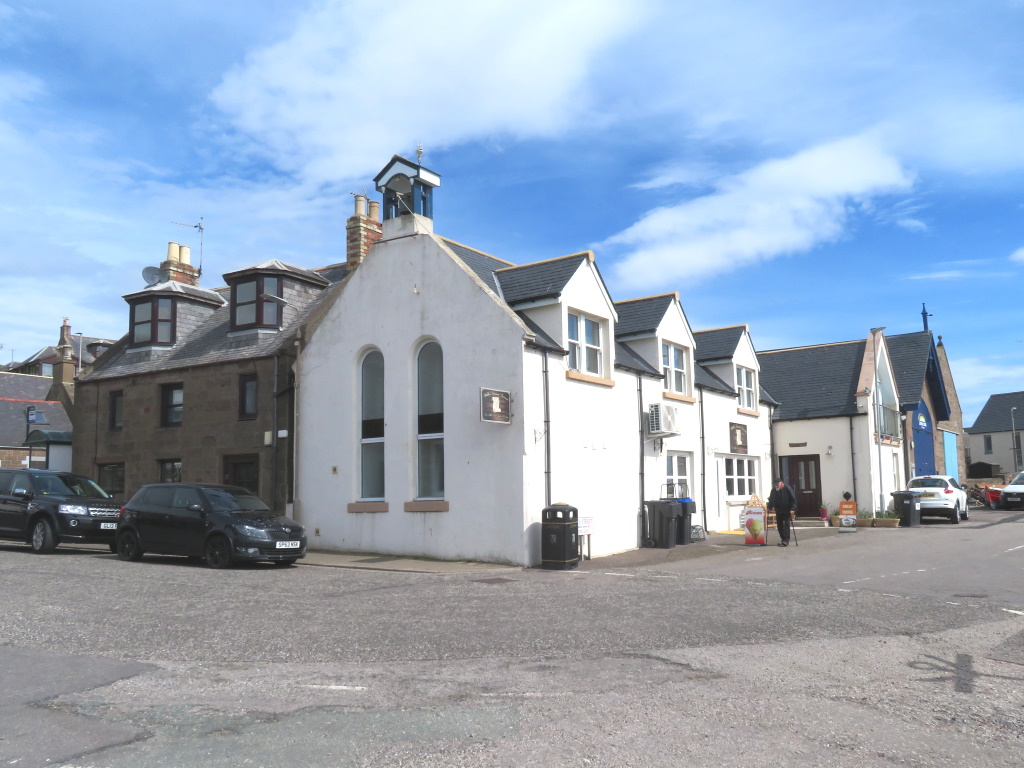 Advising trippers speak highly of the sweet stuff all served in a restored chapel that has two new converts today.

The woman did not speak but accepted the invitation to the shelter of the chapel. Sensing her distrust of the sanctuary, the minister did not question the stranger's appearance that stormy evening but simply asked... 'What is your name?'

My name is Jane. Jane McBay.

The fishing would dwindle, naturally, but there's a small whiff of the workaday and some sub-aqua activity still continues. 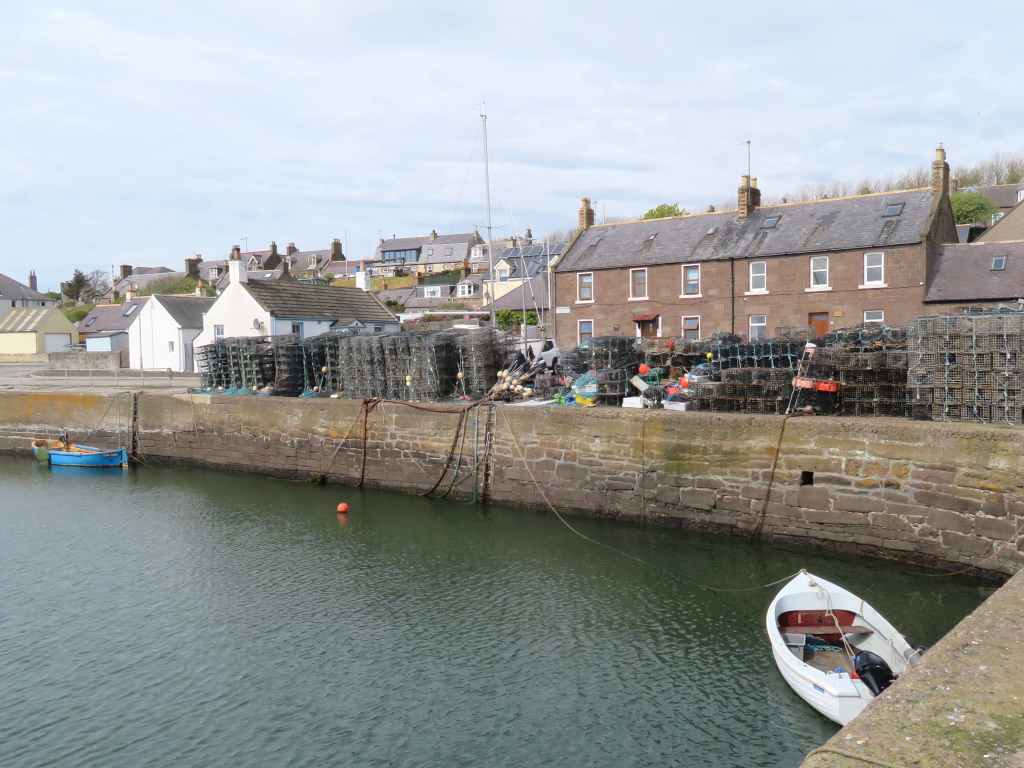 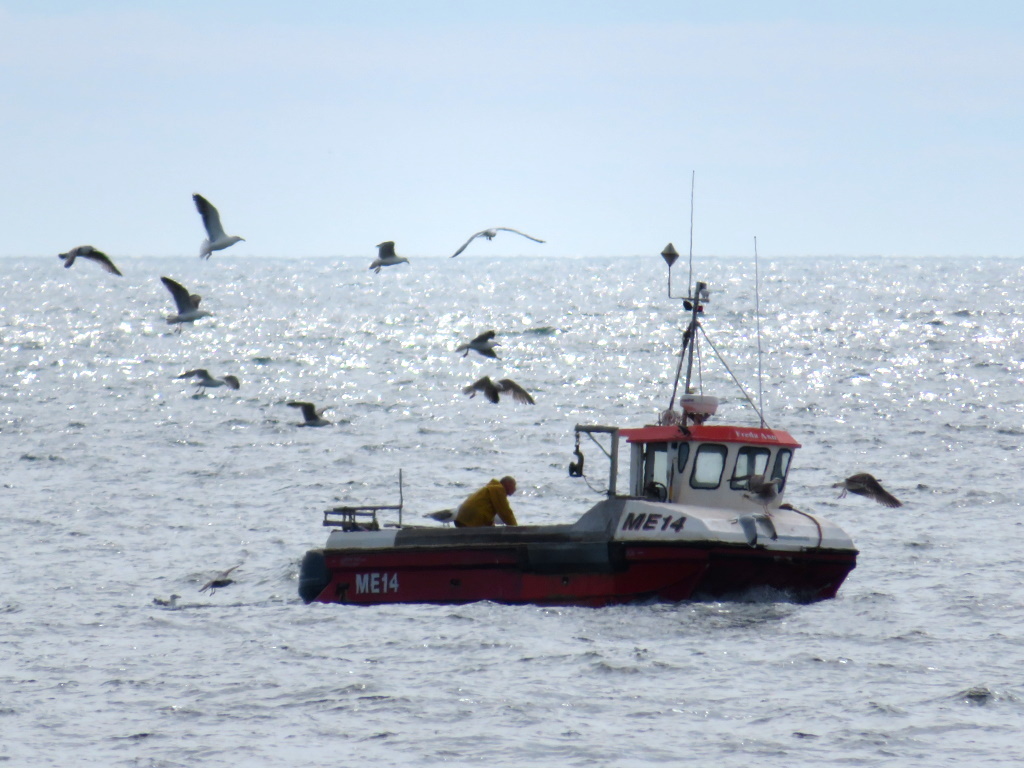 It's mainly shellfish, they say, and Murray McBay & Co pack and dispatch to... Europe and the Far East! 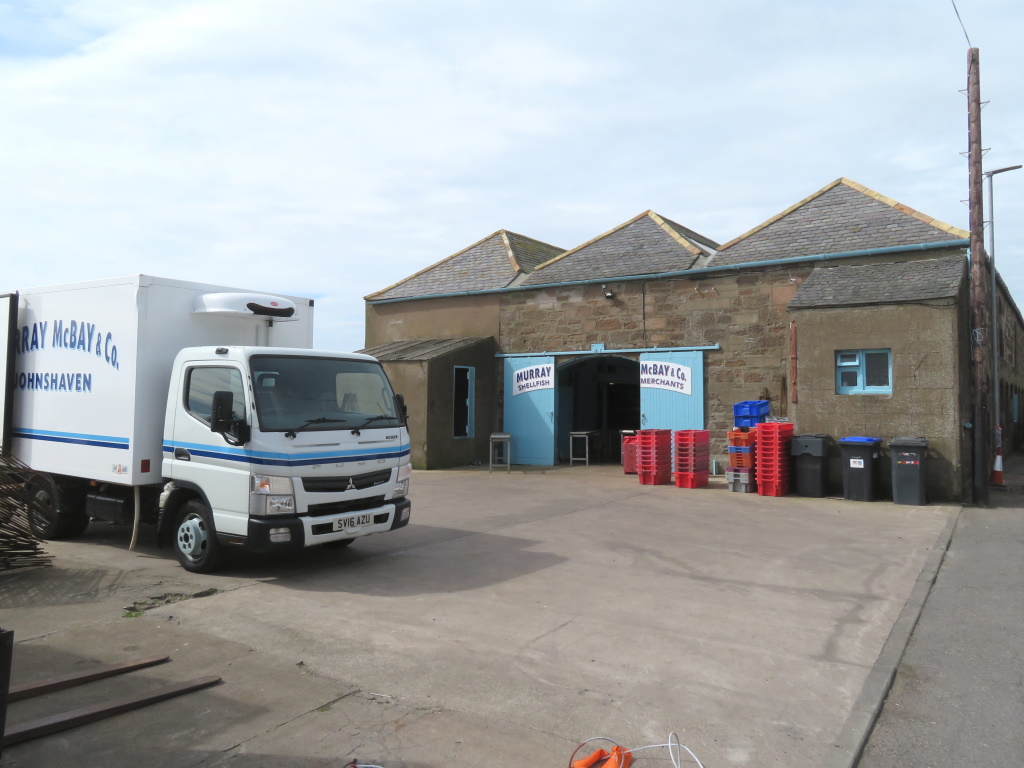 Sixty per cent of this stuff ends up being exported and that'll kickstart Rick Stein off on one of his rants. Come on Rick, who's really eating lobster regularly or paying a premium for a pack of prawns only to drown them in mayonnaise?

Jane remained a mysterious presence but was soon providing work for local women. By bartering for and processing the fishermen's catch, the goods no longer went elsewhere and for that the village was grateful.

When Taobh na Mara failed to return that morning, fear and premature grief gripped the village. When the skipper appeared, awakened, the prospect of a storm and a dangerous return meant he had not sailed the previous day but there was no sign of his vessel, nor Jane and her bed was unslept in that night.

Not until later did the boat appear with Jane at the helm but with cargo not taken from the ocean. Seven hungry children, cold and tired just as Jane when she first took shelter in the chapel.

Nine miles up the coast, the RSPB™ Fowlsheugh Nature Reserve is closer to Stonehaven, really, but that's got more than enough to say for itself.

A single-track road leads down to the cliffs and the second-largest[1] seabird colony on the British mainland, naturally. Nearly 200,000 of the little breeders from April through August but not so many puffins, shame, what with the sand eels all but gone. 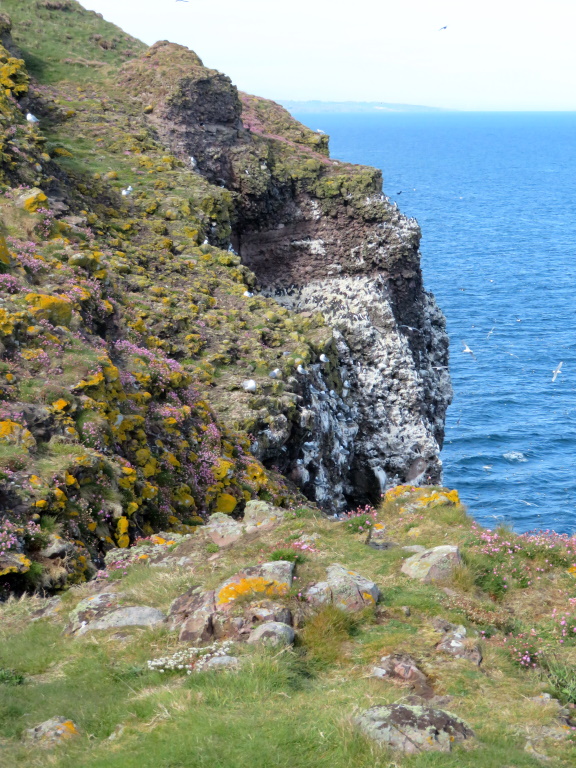 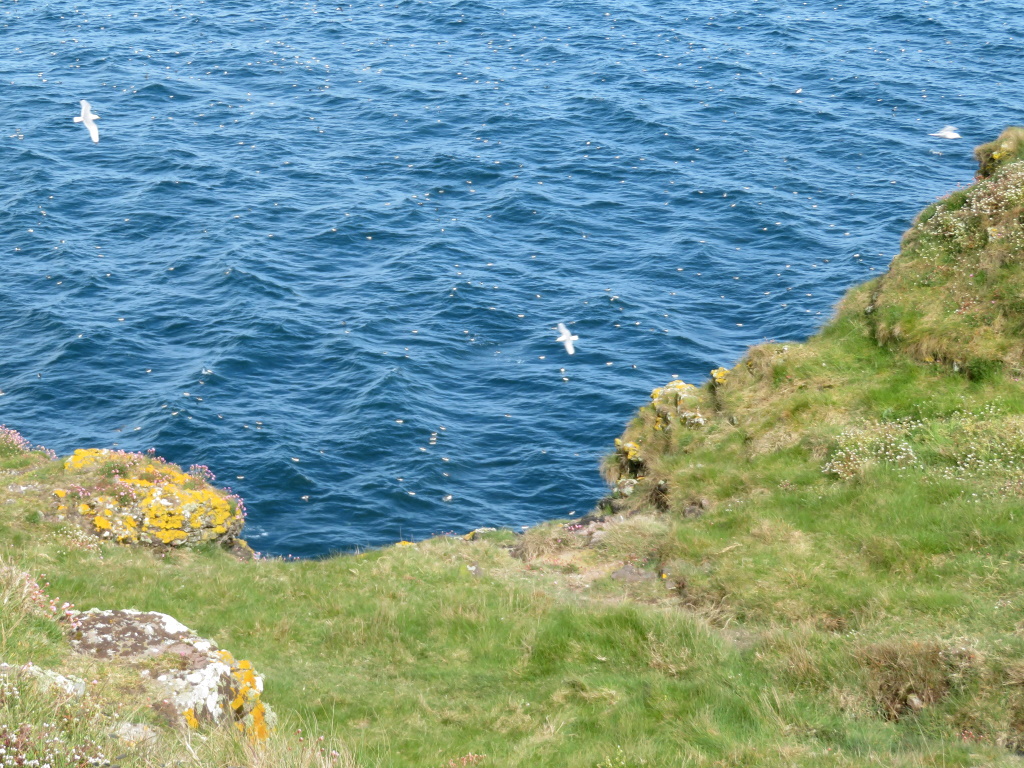 There's a mile-long trail along the top where the chalk-stained sandstone stacks are evidence of guillemots, razorbills, kittiwakes and a few fulmars, mainly. The sea is dotted-white like a busy driving range and this is still early in the season, remember?

Fans of the flora are also catered for, all amounting to a designated Site of Special Scientific Interest and, as should be known by now, they don't hand them awards out willy-nilly.

[1] Flamborough, since you ask, where the population doubles and the cliffs are twice as high.

Meanwhile, back in Johnshaven, it's either here or Gourdon or Inverbervie, if you prefer something bigger, for a still-working harbour, of sorts.

They're all considerably more convenient than the clart on getting down to Cornwall but people here aren't trying to sell you things you don't really need. There's hardly a holiday cottage to be had with more than enough local caravans for that.

You're unlikely to lose your bearings even if South Street does run west before it becomes West Street. Homemade signage points the way and it's a little bit  Wicker Man[1] with nary a soul to be seen in the deserted streets. 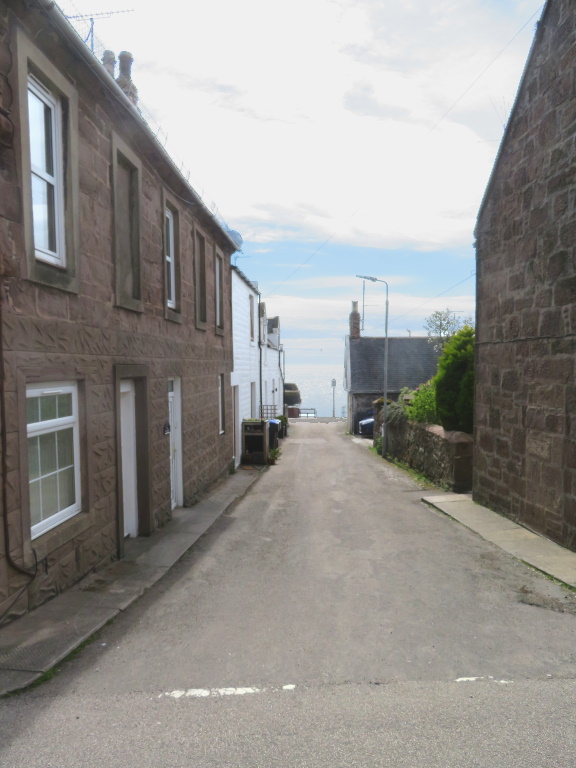 Other highlights include the remains of a house but it's all rather relaxing with just the odd individual idling about. You can continue along the coast but that looks to soon run out as have any other options so it's time to head back to the harbour. 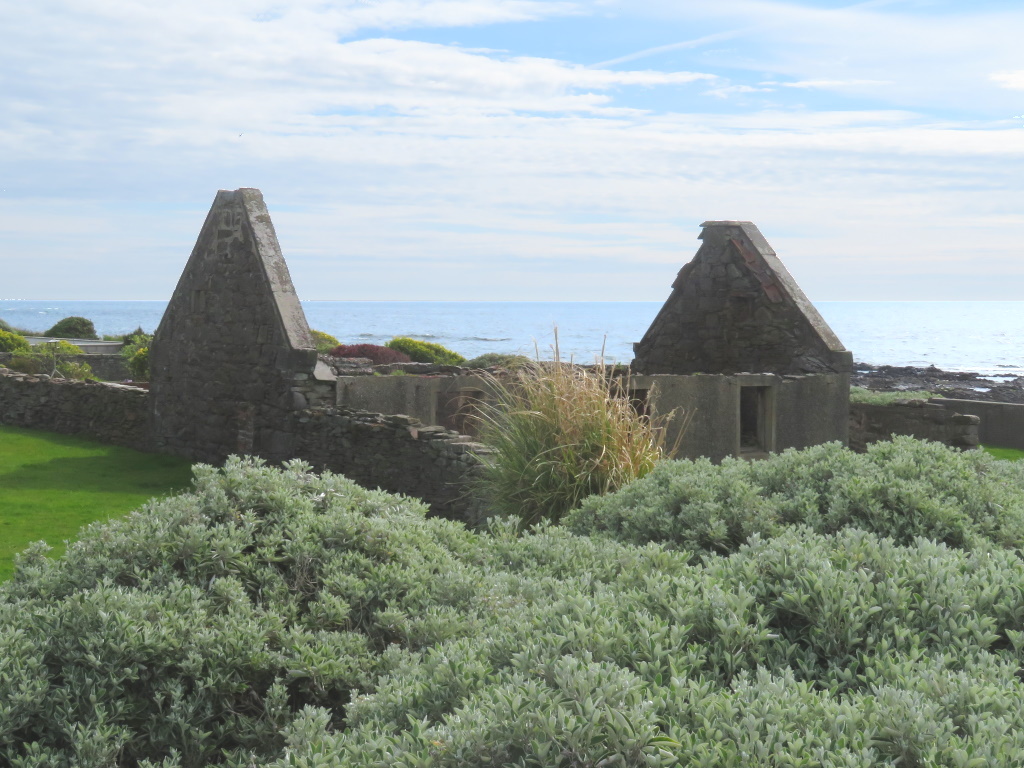 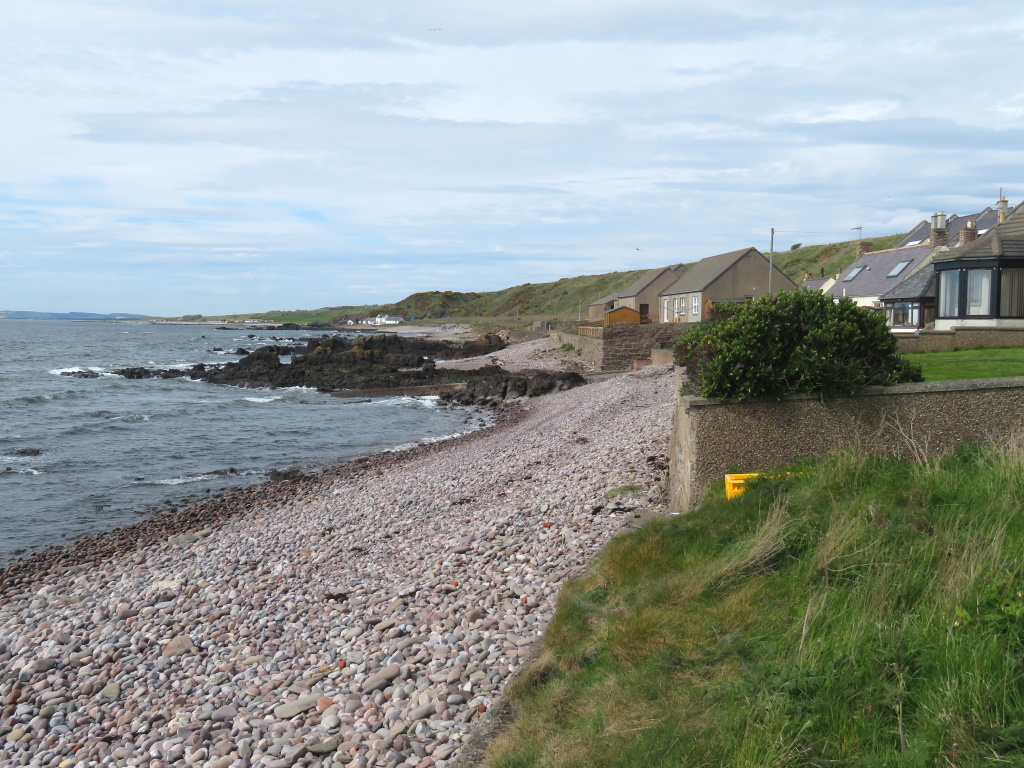 [1] "No sir, it does NOT refresh me!" © Eh-Wah Woo-Wah. You can use that in the bar of the Anchor Hotel if the beer isn't any good although it's definitely not being said that it isn't, honestly.

Seana Bewny was a fearsome man with a reputation for ripping out and eating his enemies' hearts. When he arrived in the village with his henchmen, the residents locked their doors and hid but not so Jane.

Fashioning a false nose from a turnip and wearing a wig of seaweed, Jane set about her business as usual. When Seana entered the premises she denied any knowledge of the recent arrival of a stranger of the same sex, height and build.

He stared deep into her eyes, something not quite right in his mind, but soon settled to search elsewhere taking just a package of excellently filleted mackerel. As he clicked the latch to leave, a small voice from beneath the counter and the eldest of the children... Father?

Things may be quiet today but come August the sparrows are evicted and the creels replaced with reels, traditional Scottish dancing and a feast from the sea during Johnshaven's annual Fish Festival. 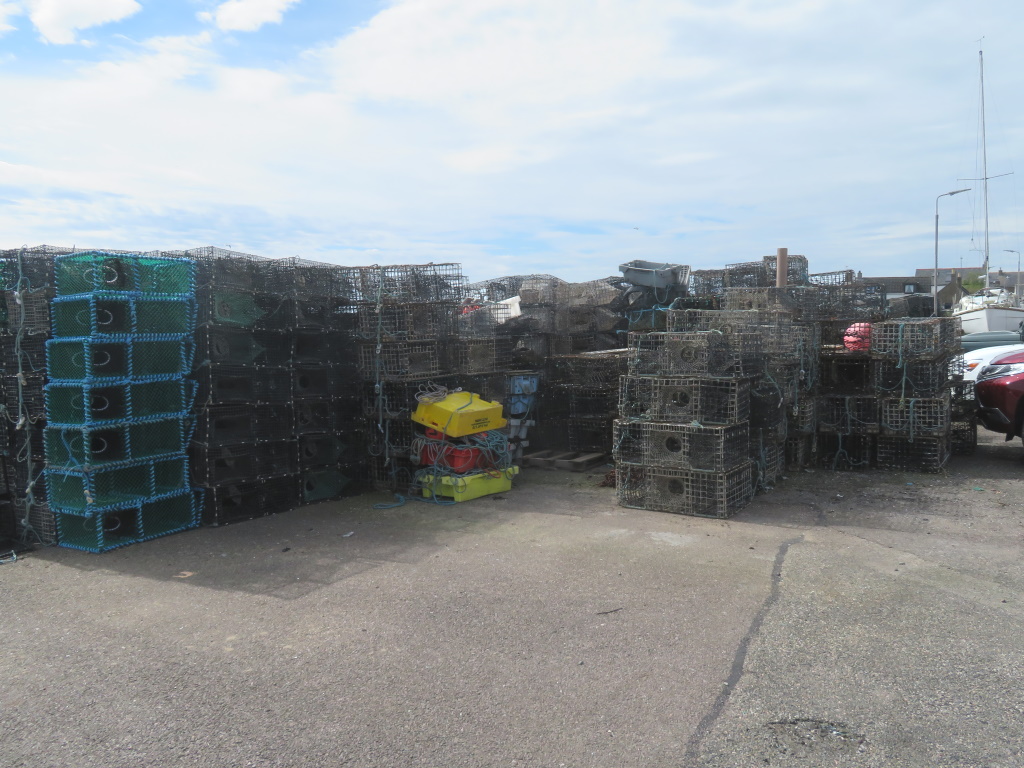 This community-friendly event celebrates the celebrated Sea Pie, a local mish-max of ex-marine life all expertly poached with precise and differing times to perfectly preserve each element's texture.

No, not that sort of Sea Pie, silly, this one's steak and potato and taken to sea, you see, to keep the fisherfolk fed during a long old trawl.

Jane was now surrounded. Seana and his men to her front and sides and the harbour wall behind, beyond that just the icy sea.

'Jane McBay?' shouted Seana, 'Morag Bewny more like!' 'You take your mother's name? You take my fish processing business? Then you take our children?'

With that Seana charged and tackling her by the waist, they plunged together from the wharf into the murky depths of the, unusually deeper than it actually is, water.

That cliffhanger sets up the second series nicely but it's bad news from the BBC™ and they won't be commissioning Jane McBay. Something about a jumping shark in episode two although that could be argued to have arrived a lot earlier.

That's a shame because Jane, or is it Morag, could be a mermaid, or something, and Ray Winston would be perfect if he can do a Scottish accent, which he probably can't so Martin Compston in menacing mode might work. That's now an idea for Netflix™ where the quality of their original programming isn't nearly quite so high, right kids?

Time to head off up to Gourdon for a look around and that's got to get you thinking... so who was this Gordon, then?