So sang Chas 'n' Dave, no less, in their 1982-appropriate  video of the old-skool seaside charms and heavily peppered, pickled bivalves.

That much of Margate is already known but it's a genuine, bloomin' shame they won't get to revisit and mention the late-Georgian splendour of which Cecil Square is a marvellous example. 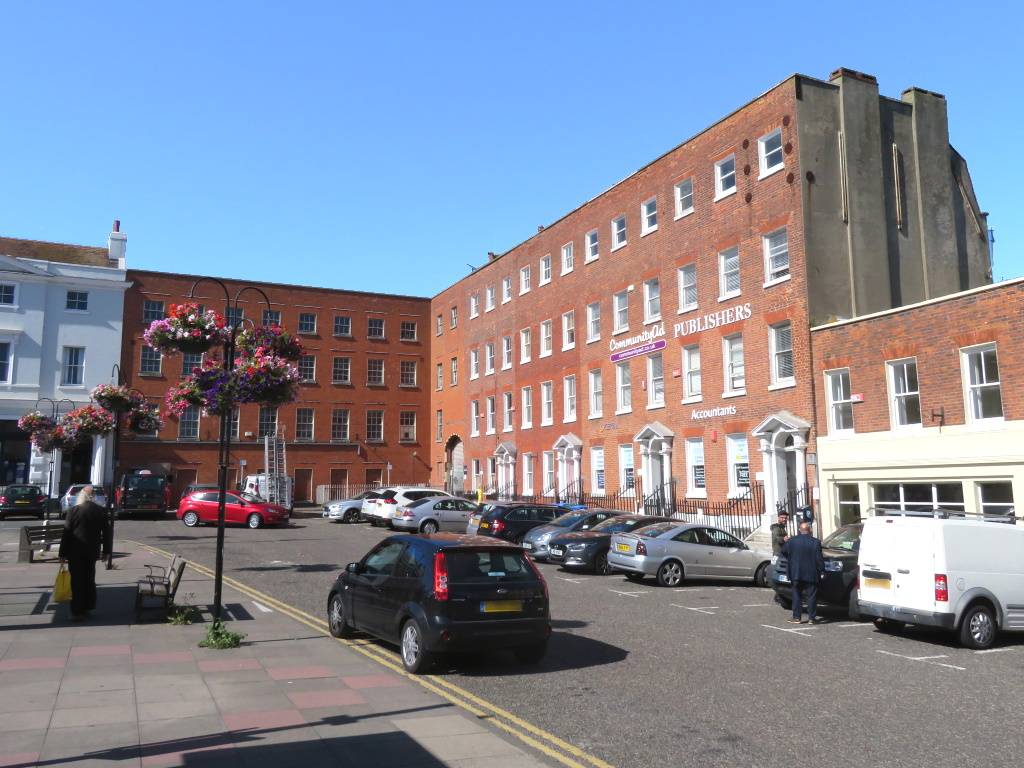 The ongoing, regeneration of the town as a creative hub is no secret, neither, but is one afternoon enough to appreciate the contents of Margate's Turner Contemporary Art Gallery?

Hmmm, but more on that in a minute.

With the parking on Cecil Square prohibitively priced, there's far better value under the concrete at the College Square Shopping Centre.

Why then, with the seafront and the Old Town straight on is a wrong turn being taken onto King Street? That would be passing over the chance of an artisan sourdough Reuben with a triple, venti, soy, no-foam latte all served by a hipster with a foot-long beard, surely? 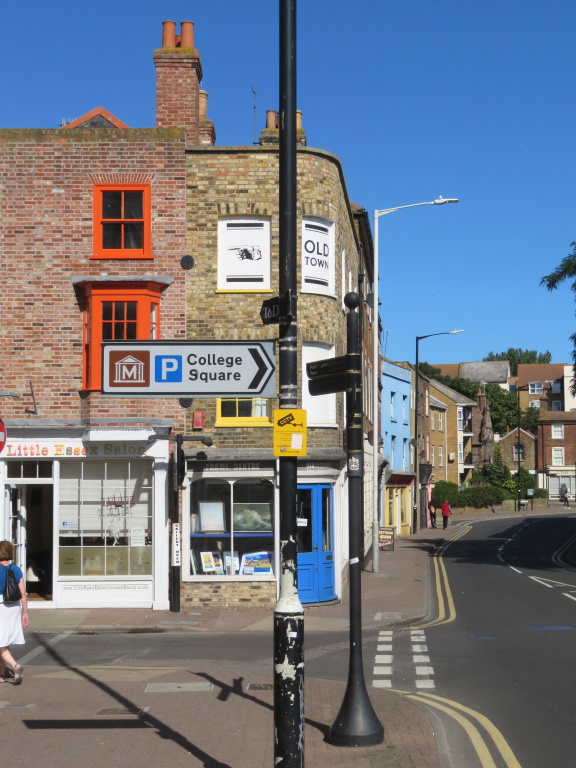 Here's for why, something about a Tudor house, or something, it says here and a 'Shell Grotto' although that just sounds like a petrol garage forecourt that's only open at Christmas.

Turns out the Tudor House is Margate's oldest building, coming in at 1525 although some work was required after World War you-know-when. 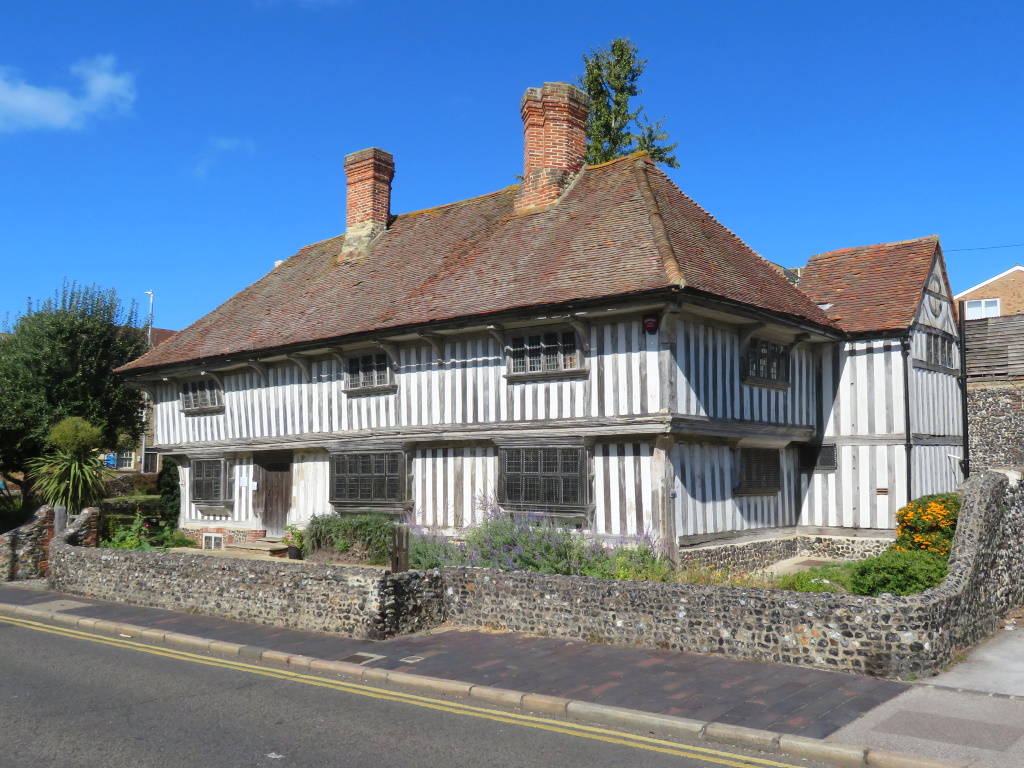 They'll let you in and around the garden or at least they will whenever the urgent repairs are complete making it sound like some right cowboy builders got the call back in 1946.

Head further along King Street, resisting the temptation of the Best Beano Café and 'Restaurant', until Grotto Hill is the big giveaway. 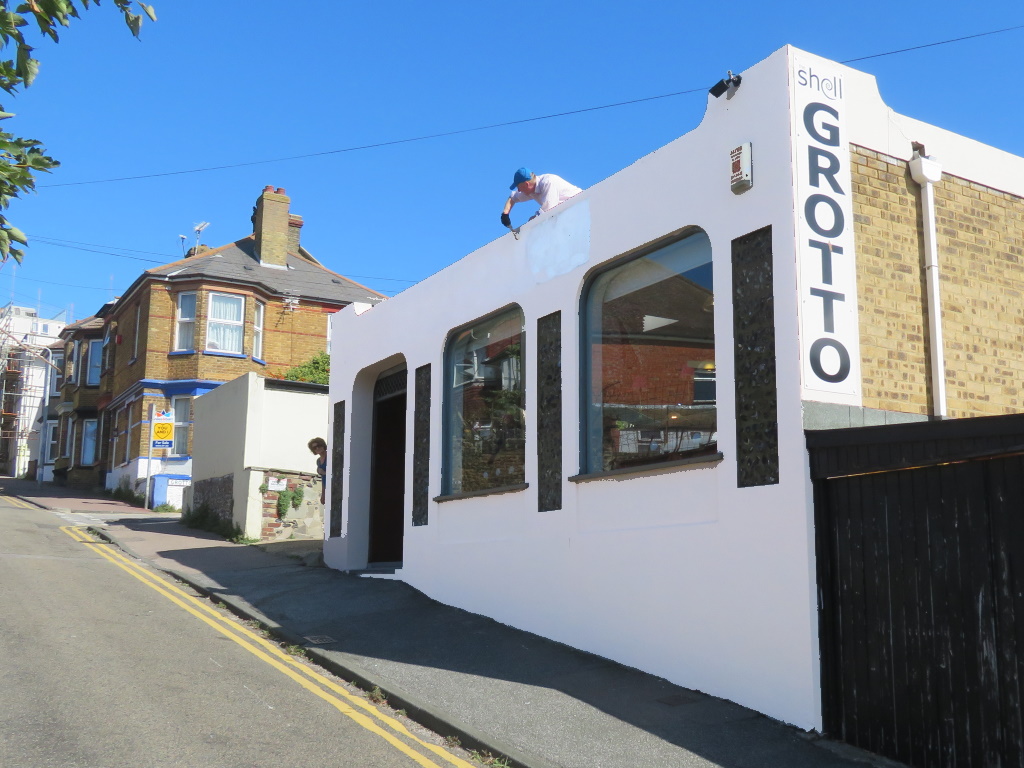 The lady behind the counter is surprised to hear this couple of customers hadn't even heard of the place until half-an-hour ago but all is soon revealed for a single-digit number of pounds per pair.

The stairs down arrive at a circular passage but not just any old underground passage, only one with ornately decorated, seashell mosaic walls. There's more of the same along a snaking corridor where things end at the open space of the 'Altar Chamber'. 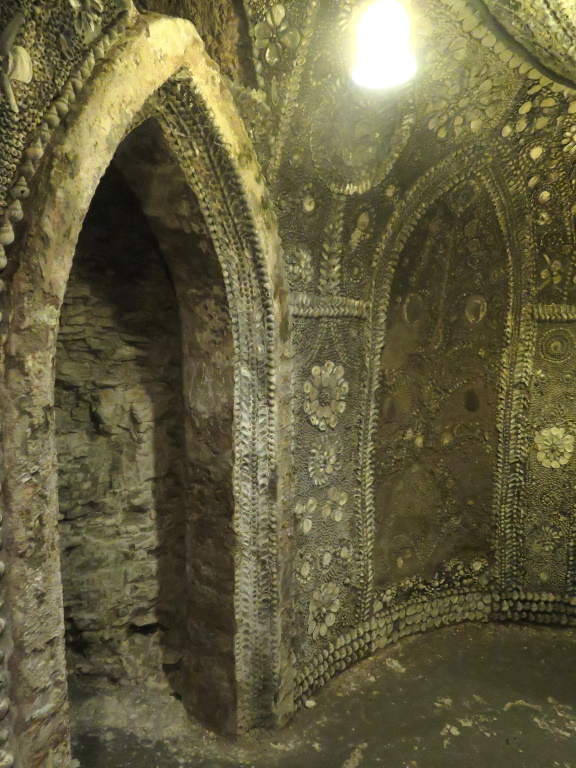 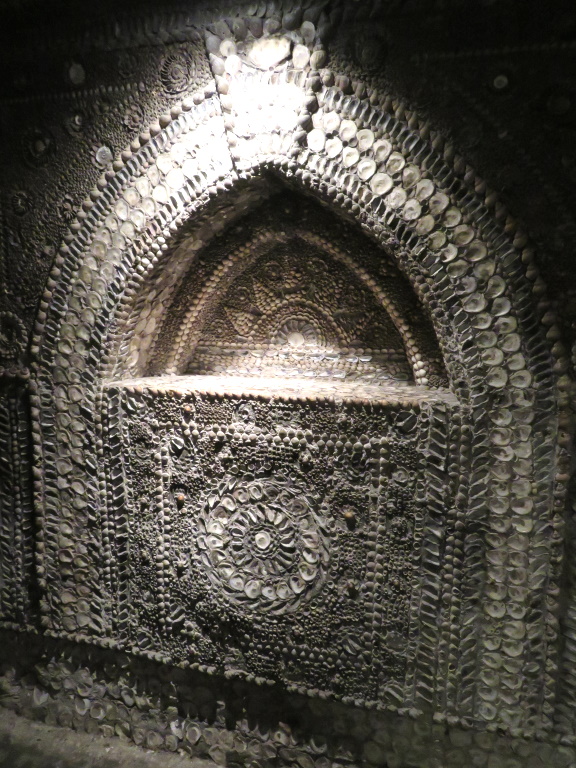 The east wall suffered bomb damage at the same time as the Tudor House, probably, but a cleverly incorporated photograph recreates the scene of an eerie, 1930s seance. 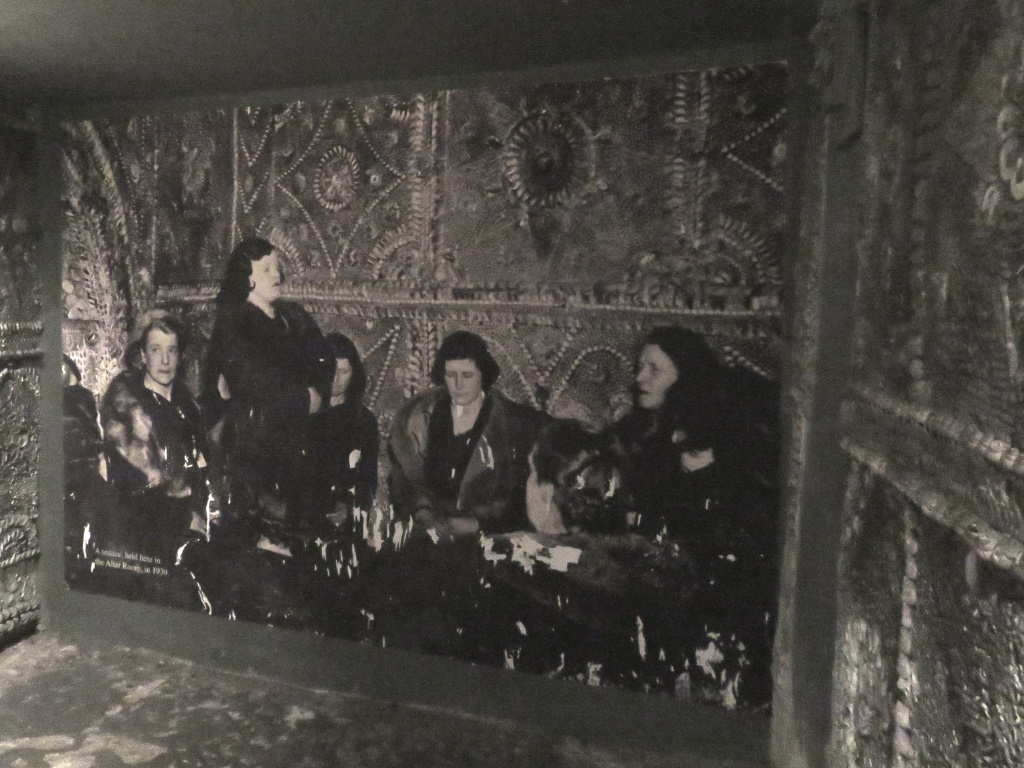 This was all only discovered in 1835 when the owner of the cottage upstairs decided to do some digging in the basement. That makes the mosaics much older and they date from, well, here's the thing... nobody knows!

Was this a meeting place for a secret, 18th-century or even a medieval society? Was it a pagan temple or could it really be Roman? Pointier heads than SlyBob's have pondered but what is known is that it's made from 4.6 million shells although you too will lose count after about 100.

The shells can be traced locally, mussels, whelks, limpets and the like and the only certain thing is this wasn't the result of Chas 'n' Dave cleaning out the cockle stall in 1982.

There another subterranean surprise around the corner but no great mystery here. Just an old, 18th-century chalk mine that's recently been restored, reopened and rebranded as a community-oriented attraction with an imaginative use of the space for special events.

Heading up the hill, Northdown Road is best described as functional although one block, in particular, catches the eye. No time to linger, however, for there's a sudden scent of the sea so cross and carry on up to meet it by heading for the lighthouse. 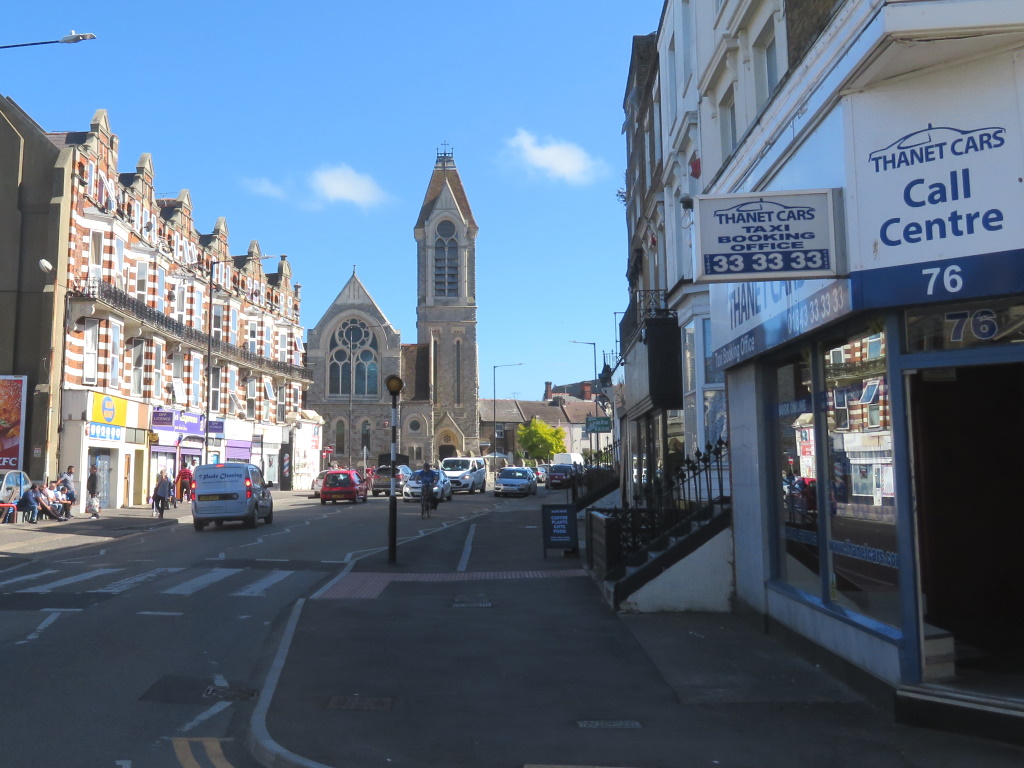 What was thought to be a lighthouse is now known to be a beacon for the Cliftonville Lido, a 1920s Art Deco complex for those who preferred their sea within these walls. 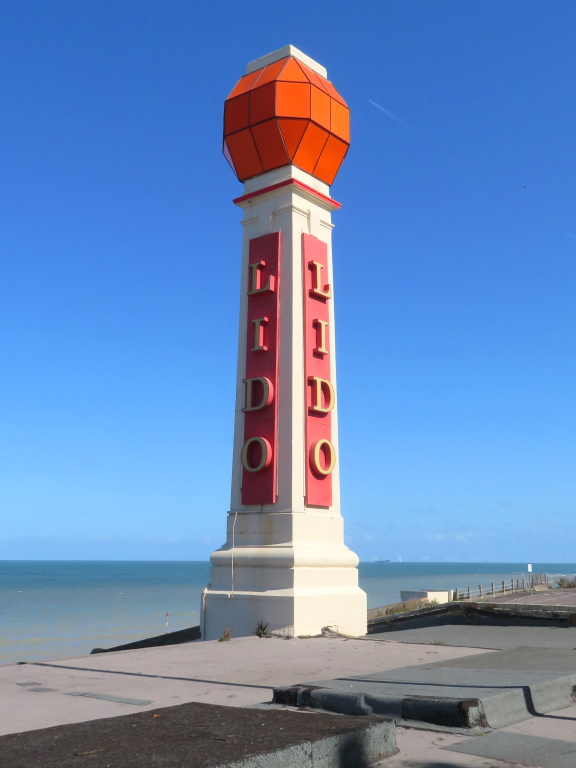 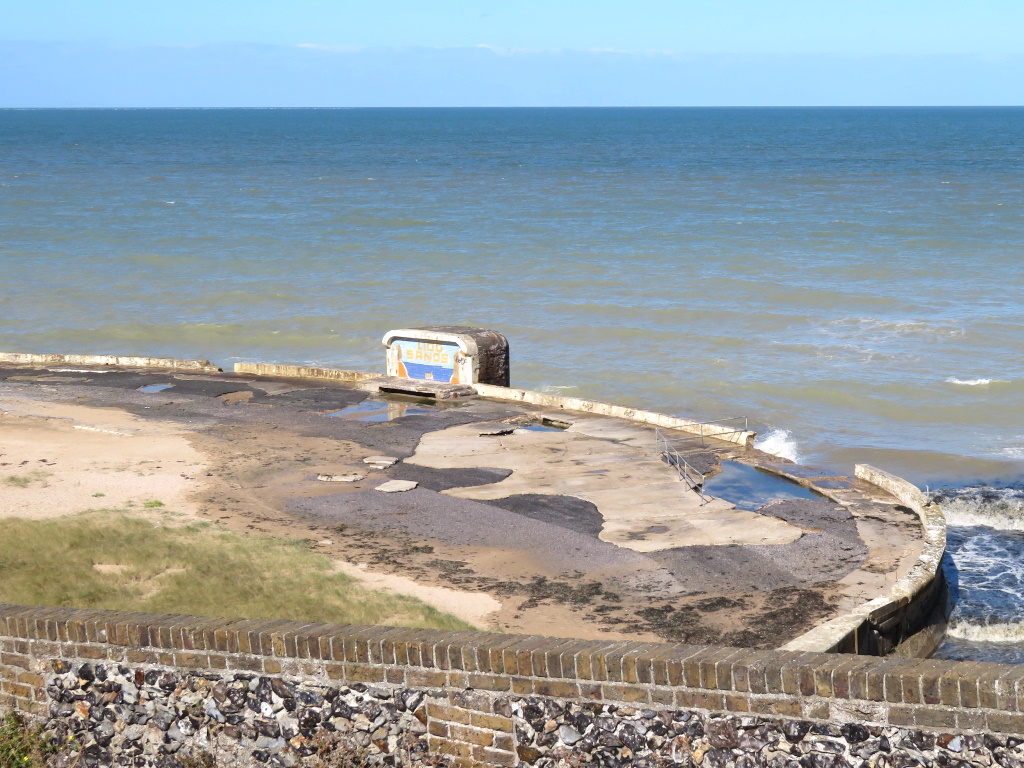 Failing to heed Chas 'n' Dave's advice, the cossies have been forgotten but nobody's been bringing theirs since the '70s, neither, after most of this was washed away.

There are ongoing campaigns to restore what was formerly glorious including a Victorian tunnel, built to provide access for the modesty-preserving bathing machines, some of the earliest in England, they say. 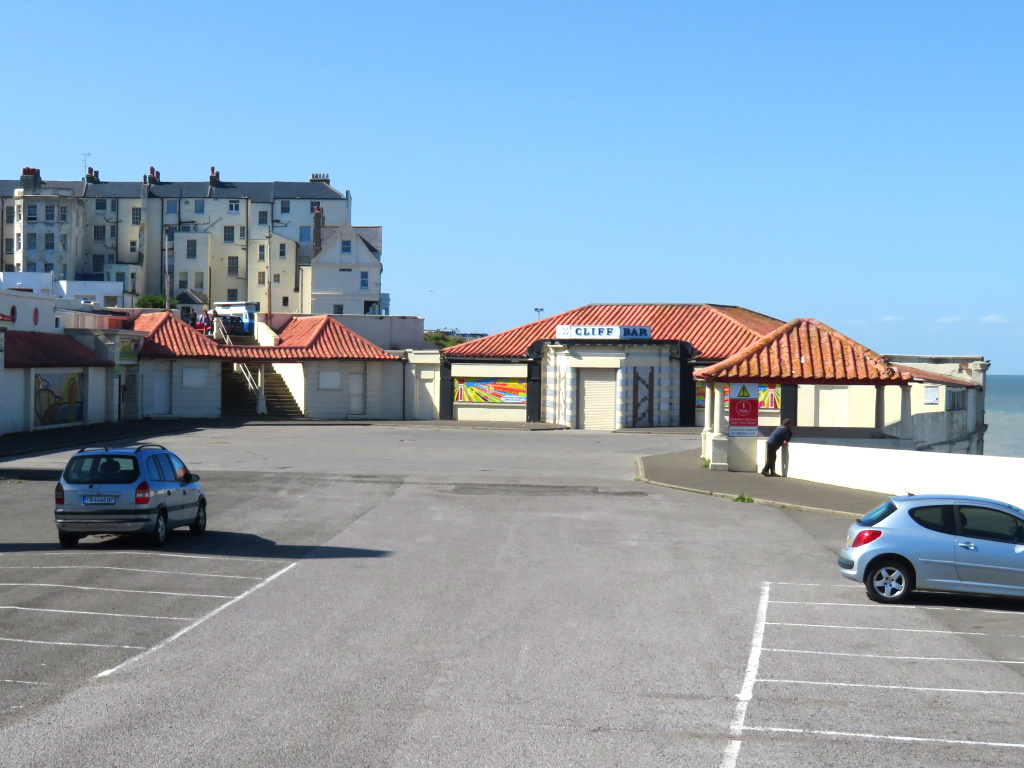 That could prove troublesome since someone went and built a lido on it and the only thing remotely underground, these days, is a dodgy-looking nightclub with a snooker hall attached.

This just about marks the end of Cliftonville, a formerly upmarket area to the east of where the oiks went for their whelks.

Following the seaside decline seen almost everywhere since the '70s, they're now selling soap made from the seaweed that's said to stink up the harbour and vintage, Danish furniture. 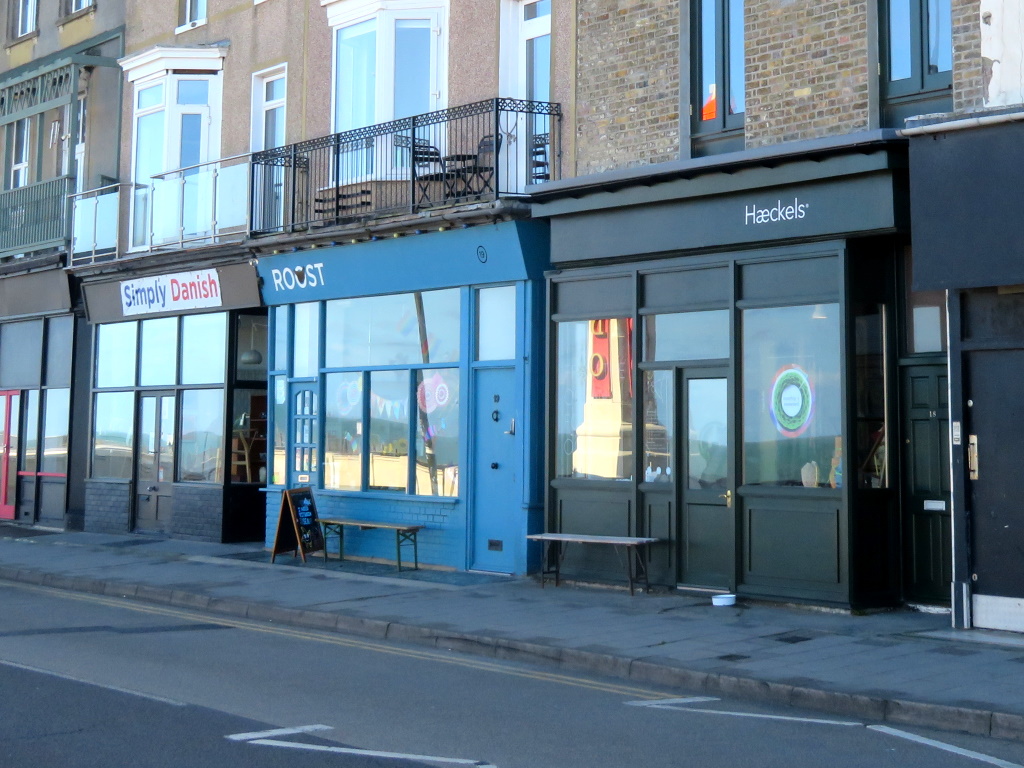 This ongoing rejuvenation is attracting them creative types from fancy London and this is the first real sighting of 'Shoreditch-on-Sea', a dreadful description devised by an egregious estate agent, probably.

The mysteriously named Fort Paragon is the name of the road that runs in front of Paragon Court, a block of Georgian lodgings that now look a little faded. 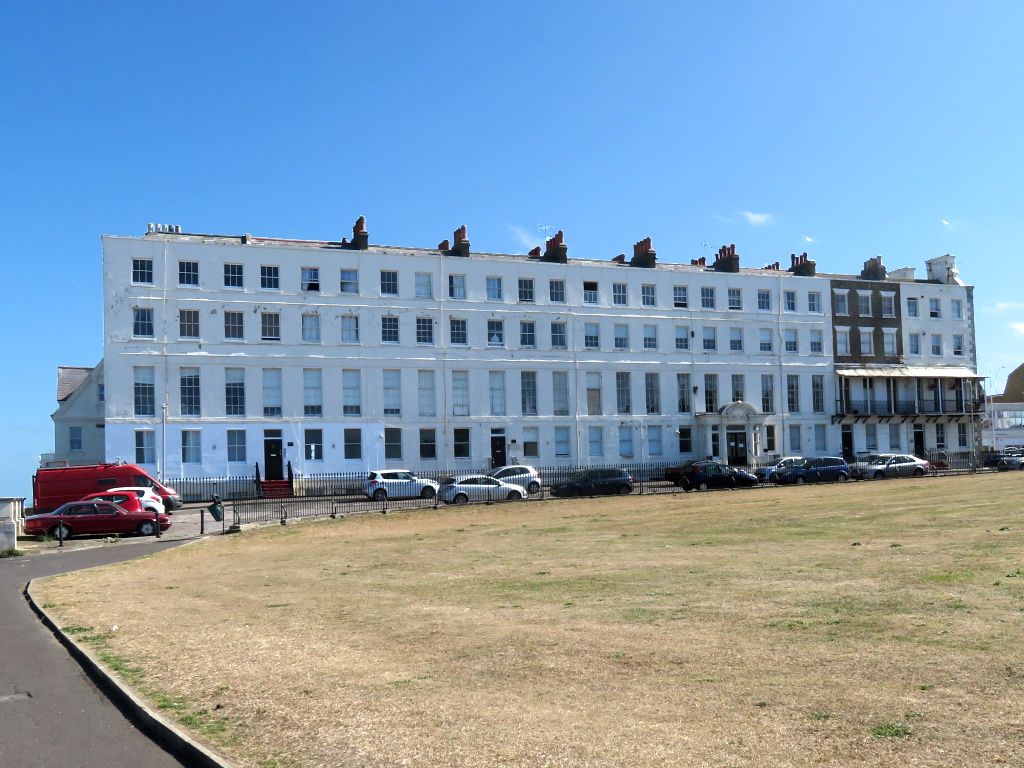 It's also the intimidating name of the former hotel that once occupied the block but the nearby fort in question disappeared when Napoleon was no longer considered a threat.

In its place, Margate's Winter Gardens but there was a caveat with the construction. To preserve the views from the bedrooms of the surrounding blocks, it was built in a dip but that hasn't stopped it catering to fans of the performance for over 100 years. 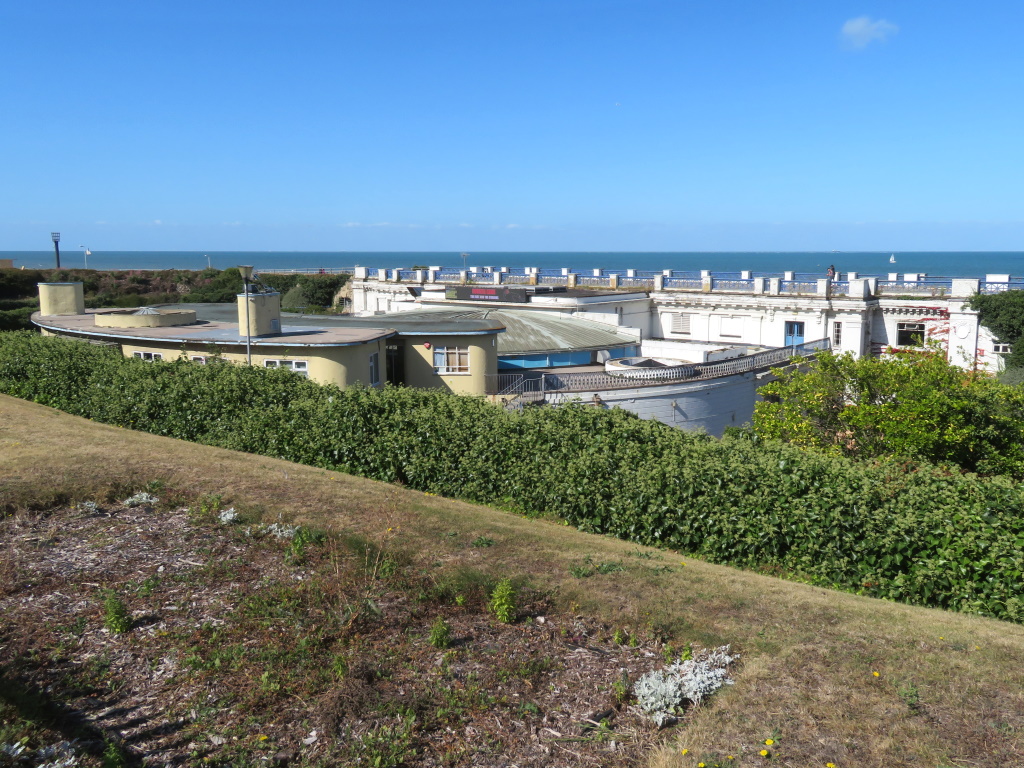 It's a month too early for From the Jam's 40th-anniversary tour of Setting Sons and From the Jam are only the band The Jam could have been. Settings Sons, by the way, would have been the greatest album ever if it hadn't been rushed out with a criminally short, closing cover track.

Ironically, that means they won't be playing  Going Underground, probably, even though they definitely will, definitely.

Looks like that was one of the last gigs played here with management back in the hands of the local council who don't seem to know what to do with it? I don't know, how about multi-function spaces for dance and theatre shows, events and expos like it was for the previous 111 years?

That musical diversion leads nicely into a more cultural segment with the appearance of Margate's Turner Contemporary Art Gallery. 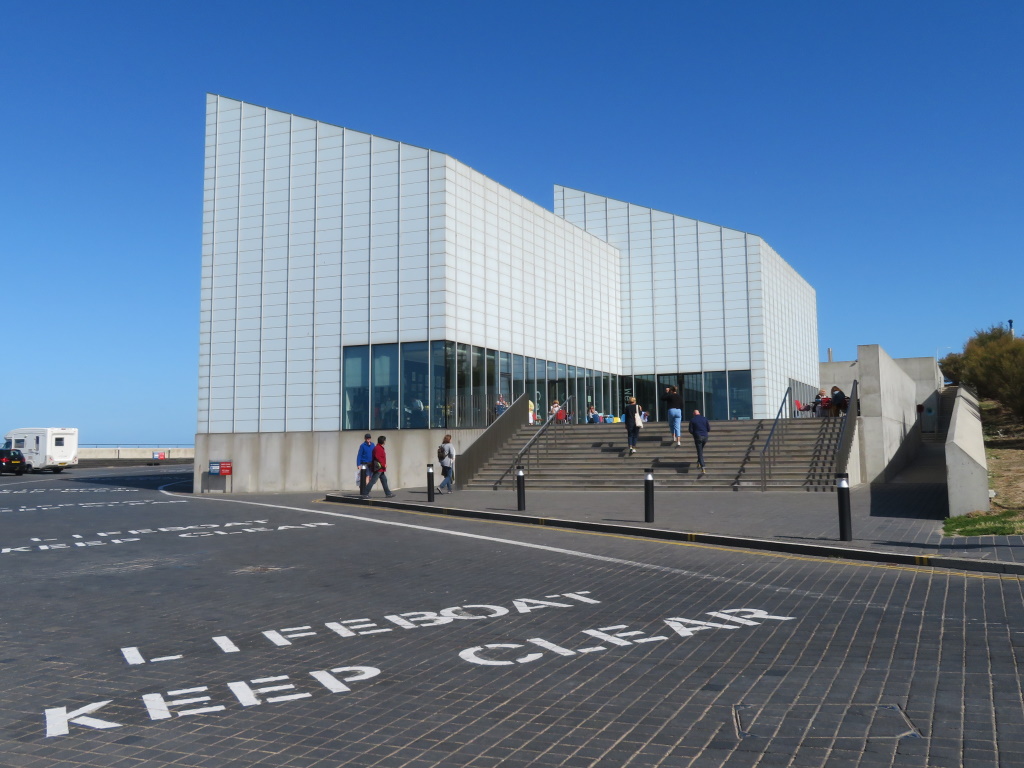 You too are probably no strangers to these places and may even yourselves have let out an 'I could do that!' but there isn't even any of that today. All galleries are being Turner-ed round, literally, for the Turner Prize, no less, and upstairs is off limits leaving just a handful of hangings to justify the free, at any time[1], entrance.

Still, at least there's a café and, in the bookshop, quite a few volumes of digitally enhanced dilapidation from around the UK coast although you used to be able to just look out of the window for that.

The lifeboat station isn't taking the cries of a man drowning seriously but that's because there isn't, of course, and there's a much better idea of it when the tide's oot. 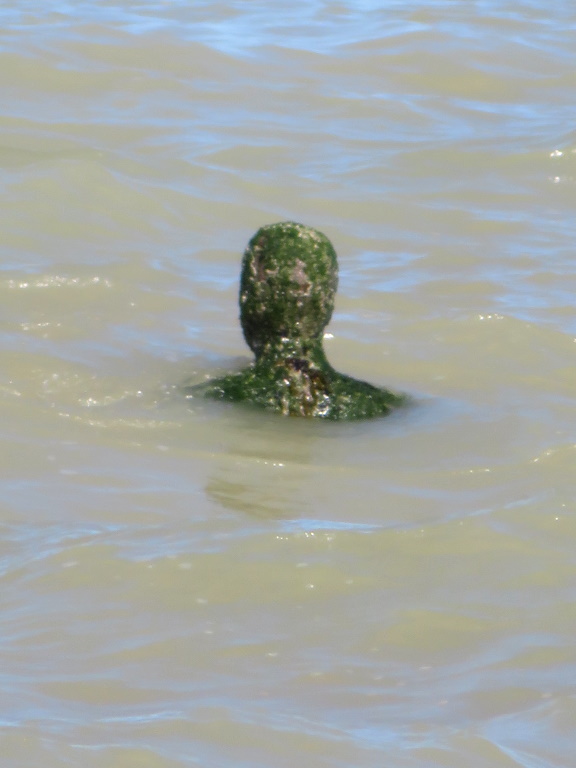 It's temporarily loaned to the Turner and is one of Antony Gormley's series of Another Time sculptures, which asks '...to bear witness to what it is like to be alive and alone in space and time.' Beg pardon?

Tracey Emin famously grew up in Margate and her much-derided bed made an appearance here in 2017. Say what you like about a dirty mattress but her purely personal piece of work doesn't require an unfathomable strapline.

All this from near Margate's marvellously informative Visitor Information Centre and the start of a, more than, serviceable beach and bay. 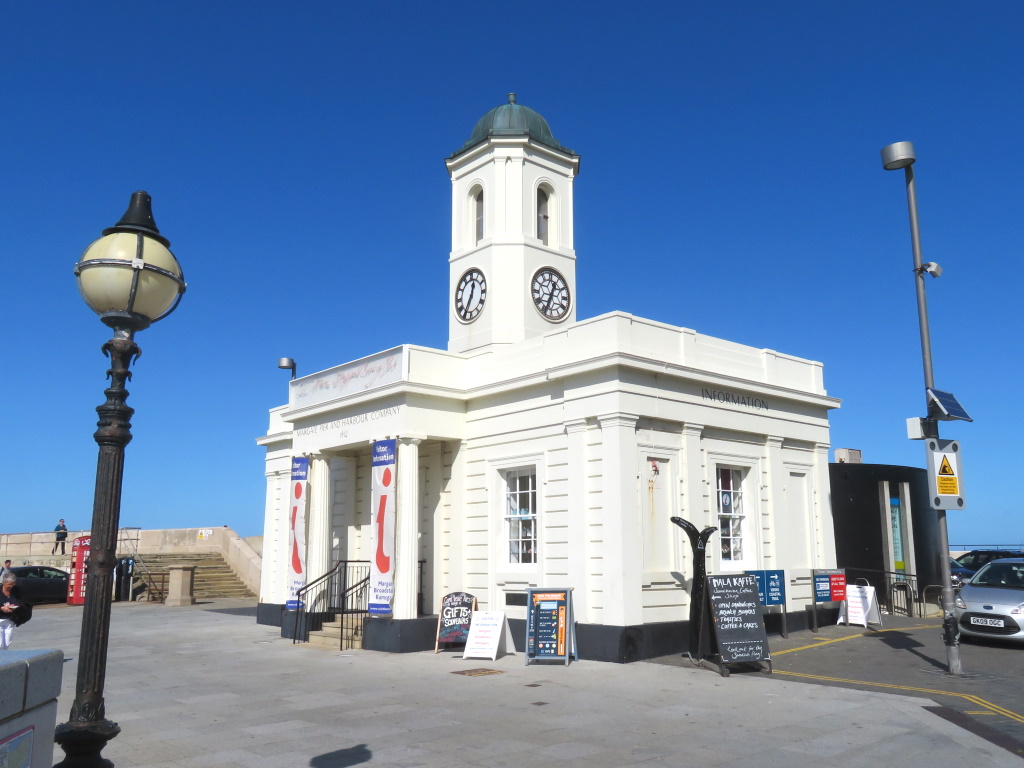 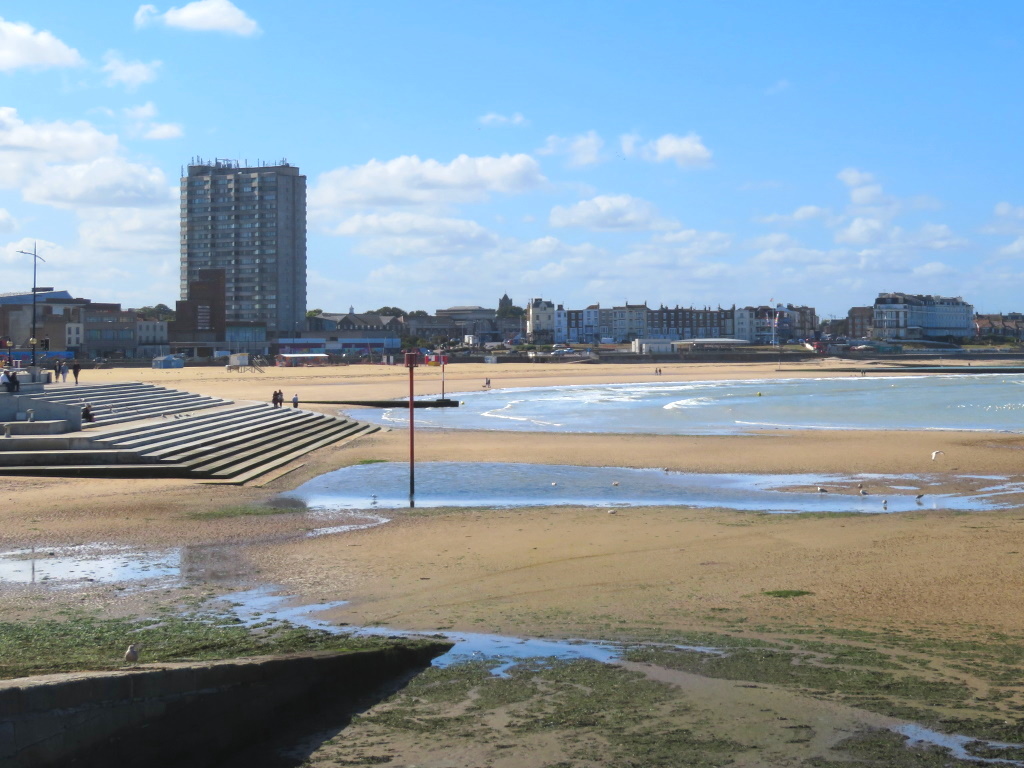 Advising Trippers state the steps are a 'Great place to sit' but what they don't say is the King's steps don't date from some Edwardian heyday. Less than 10 years old, these, and necessary to keep, what's still just about, the North Sea away from Marine Drive so that's why they don't make an appearance in Chas 'n' Dave's day out.

Following Marine Drive round and this is more like it, the heart of old Margate where it's all fish & chips, 'musements and the now mandatory Wetherspoon™s. 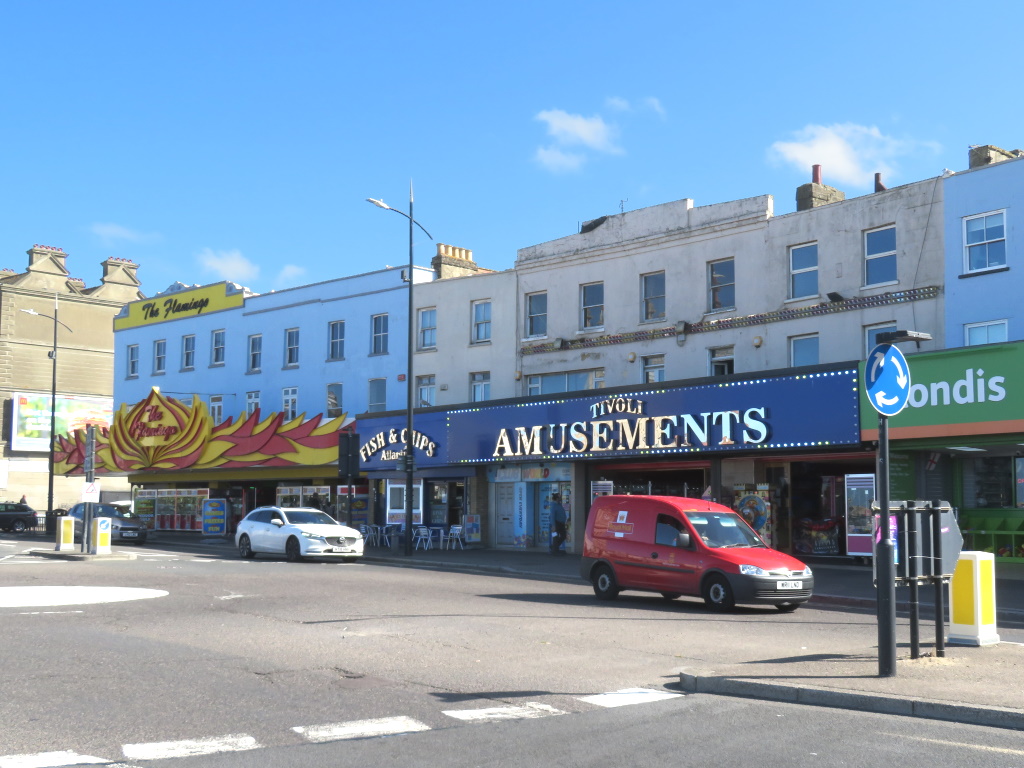 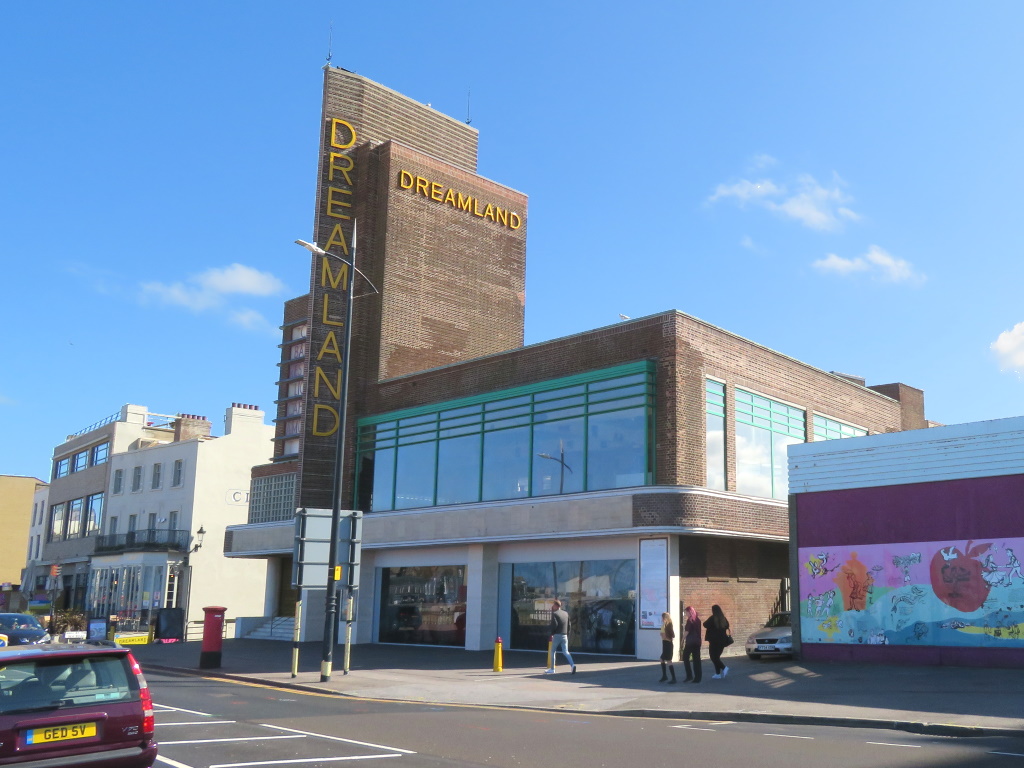 Margate's main attraction, however, was Dreamland, an optimistically named amusement park containing the oldest rollercoaster in the UK, no less. Its Grade II listed status meant it couldn't be touched when plans to redevelop the site for the residential were proposed in the 2000s even after, erm, taps nose, a couple of fires.

The park eventually reopened but not until 2015 and you'll be disappointed today at being told off for trying to snuck in since it's weekends only out of season, this being the back end of September. 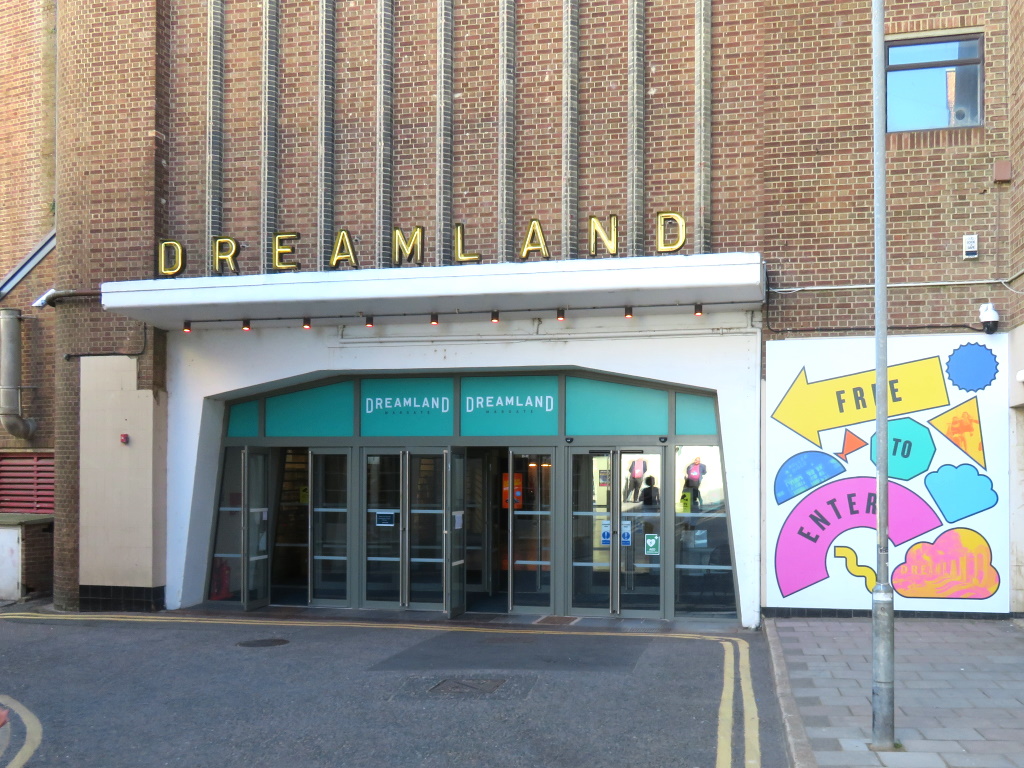 Margate and Dreamland feature heavily in 'The Jolly Boys' Outing', the Only Fools and Horses 1989 Christmas special, a show that people forget only became really good when John Sullivan wrote some proper female characters and the running time was upped to 50 minutes, right kids?

Named after a contraption that gave children's rides along the promenade, Wetherspoon™s' Director of Contrived Waterhole Naming very nearly gets a full (5/5) for that. It's only because there seems to have been  several operating around the country even though the one in Margate might have been bought by Peter Sellers.

It's back the way you came past the Queen Victoria Clock Tower, commemorating some golden work, jubilee-wise, and up to the raised area of Marine Gardens, a convenient resting point. 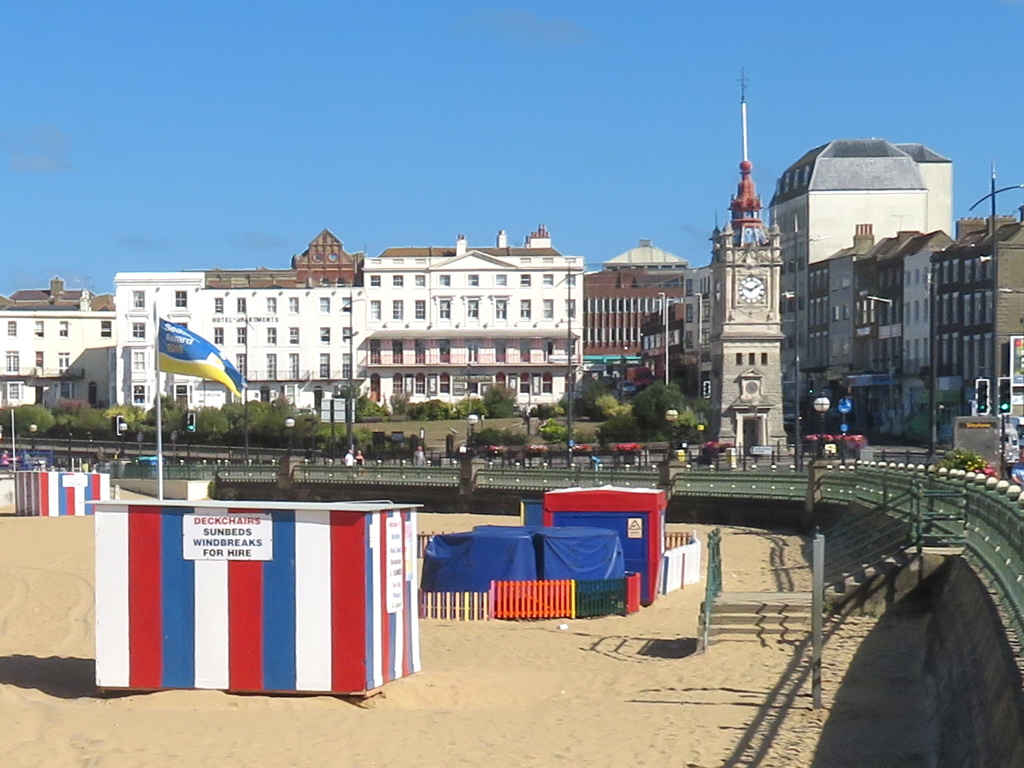 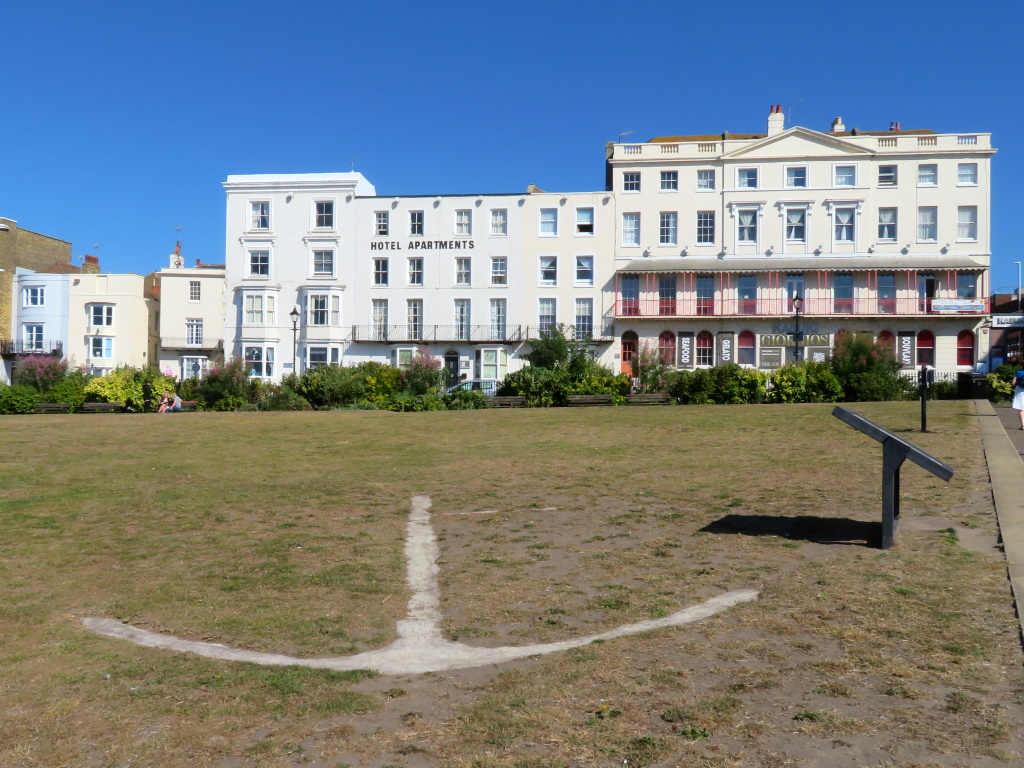 Here is a chance to reflect on what it is that still brings people to Britain's seaside and a chance to reflect that Margate just seems to be missing something. Serviceable beach, check! Fish, chips and 'musements, check! Funfair, finally reopened even though they won't let you in to nose at an old rollercoaster, check!

That's it! That's it! There's a piece missing and it's obvious there's no pier here! There used to be one and access to the prolific Eugenius Birch's 'jetty' was just behind the clock tower once you'd avoided any mechanical elephants.

Just for once, a mysterious, taps nose again, fire didn't see to its destruction rather a winter storm in 1978 that also took out the lido.

Eighteen months earlier, Health & Safety had already stopped you walking along it and with the elephant also gone the way of the Mods and Rockers, nobody except Chas 'n' Dave would ever speak of Margate again. Not, that is, until the 21st century when they went on and opened the Turner.

All this talk of gentrification isn't overly evident with the Leko Holiday Apartments not returning any calls for a week next June and the pedestrianised shopping area could, sorry Margate, just about be anywhere. 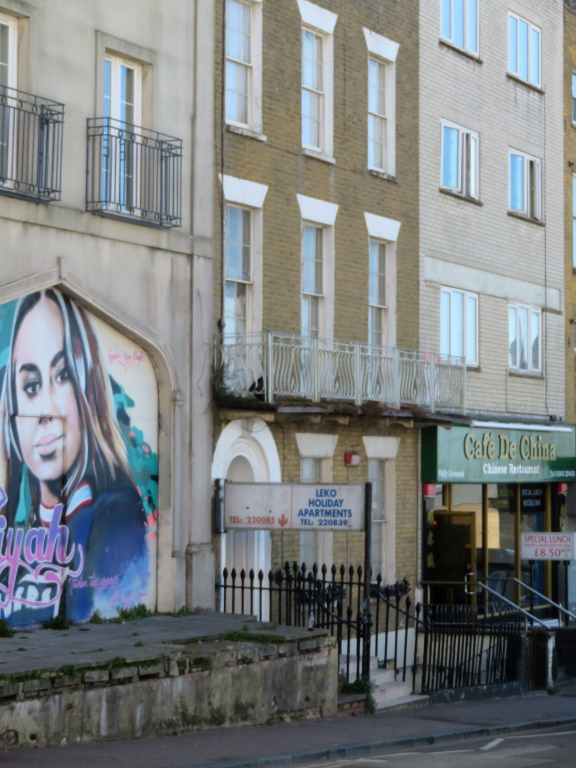 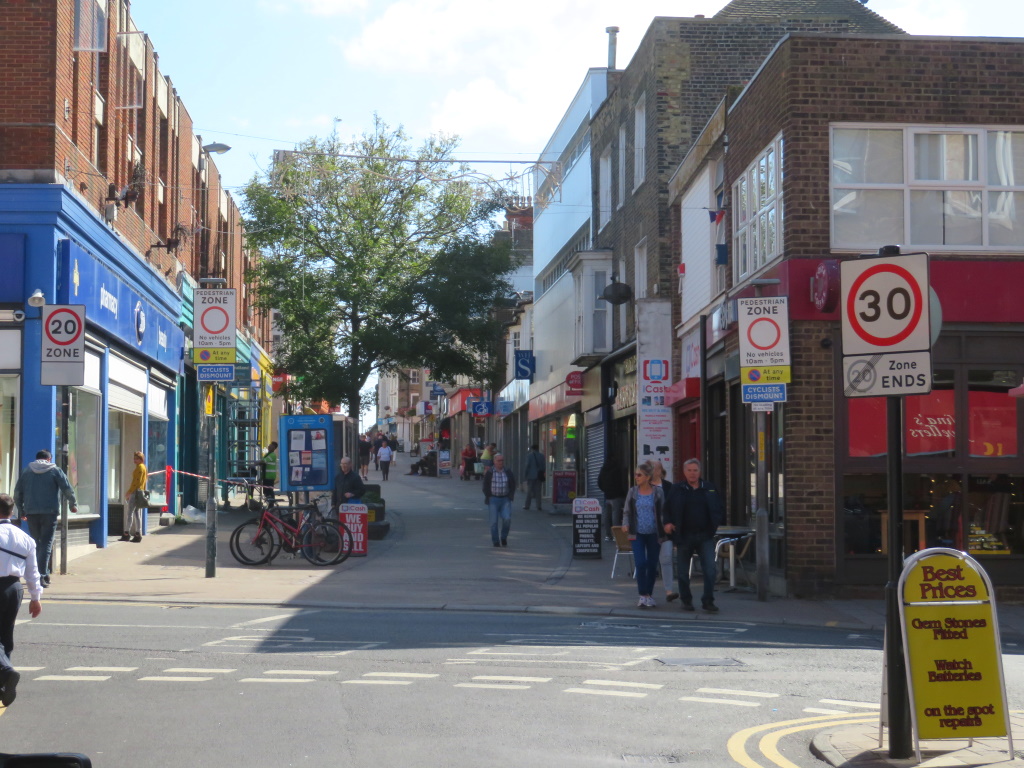 A left turn down High Street, however, and Betfred™ and BrightHouse™ soon give way to designer coffee and trans-seasonal modern utilitarian womenswear.

This leads down to the previously overlooked and trendy Old Town, you see, but the claims of regeneration appear to have been greatly exaggerated. The area only extends for a couple of streets, really, where every available outlet now tempts with something you neither need nor actually want. 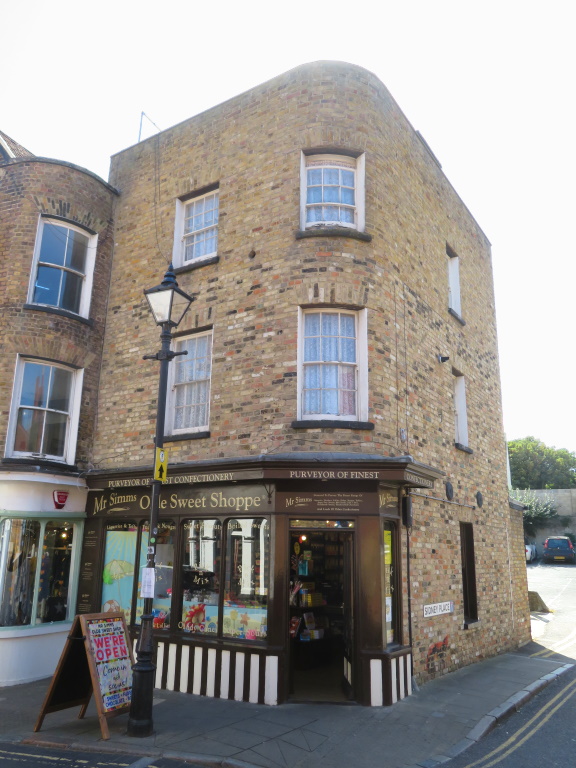 Still, it's where Guardian™-writing types effuse over bowls of rustic  verdura e fagioli making Margate a very different place from the one in 1982 and Chas 'n' Dave would now be singing...