Bang at the bottom of Loch Lomond, 20 minutes to the Trossachs and half an hour to the Highlands, proper, Balloch should be a booming base but people tend not to linger. 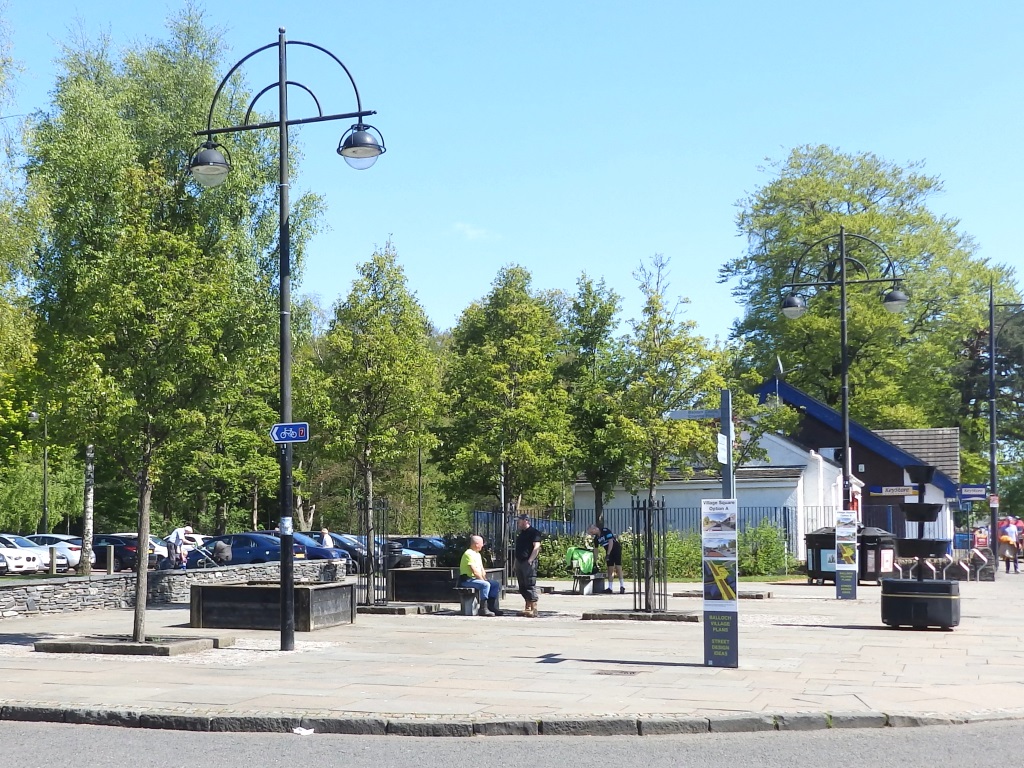 If you're not here for the boating, Balloch's missing a heart and doesn't entice you to pull over, park up and part with some pounds.

Beyond the old-skool B&Bs, the tills aren't really ringing and the only change seen over the years is this mini-parade of shops[1] and 'apartments' that used to be a petrol station. 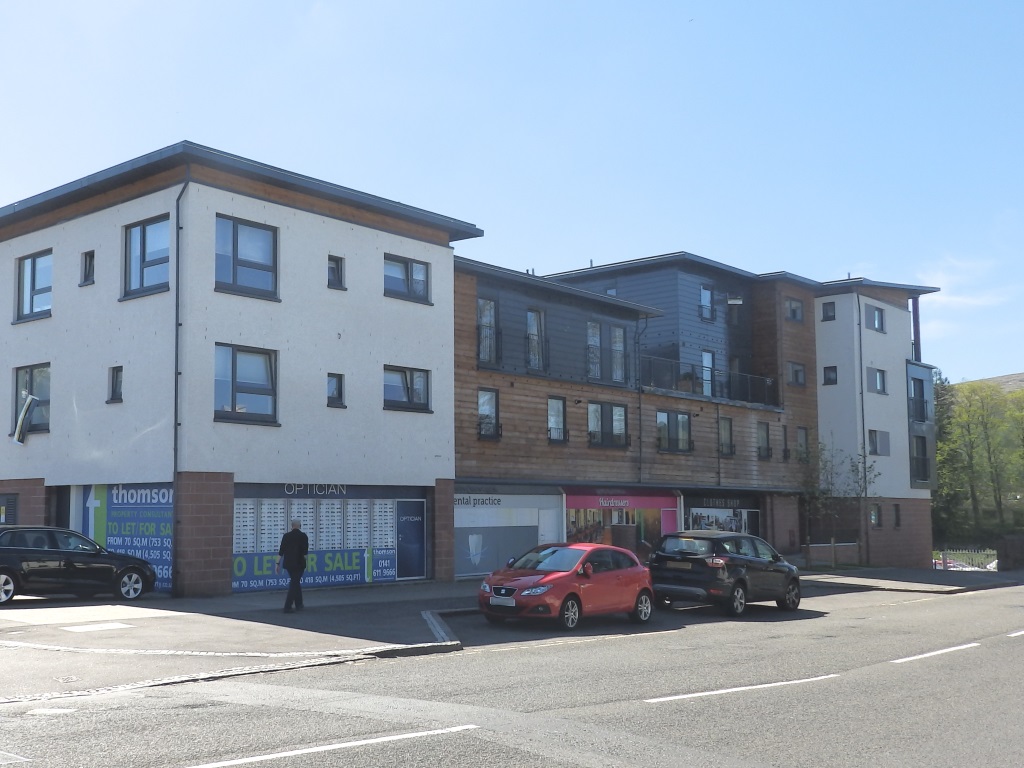 That's now an inconvenience as you head up into the largely hydrocarbon-free Highlands with just a quarter-full tank having forgotten to fill up in Alexandria.

[1] Still sat empty after all these years.

Big changes, though, are planned on the west bank of the River Leven by the people who run Flamingo Land™, no less.

Flamingo Land? A North Yorkshire theme park with tigers and giraffes in it. Their plans here are a different kind of lofty, namely lodges, a boutique hotel and 'glamping pods'. 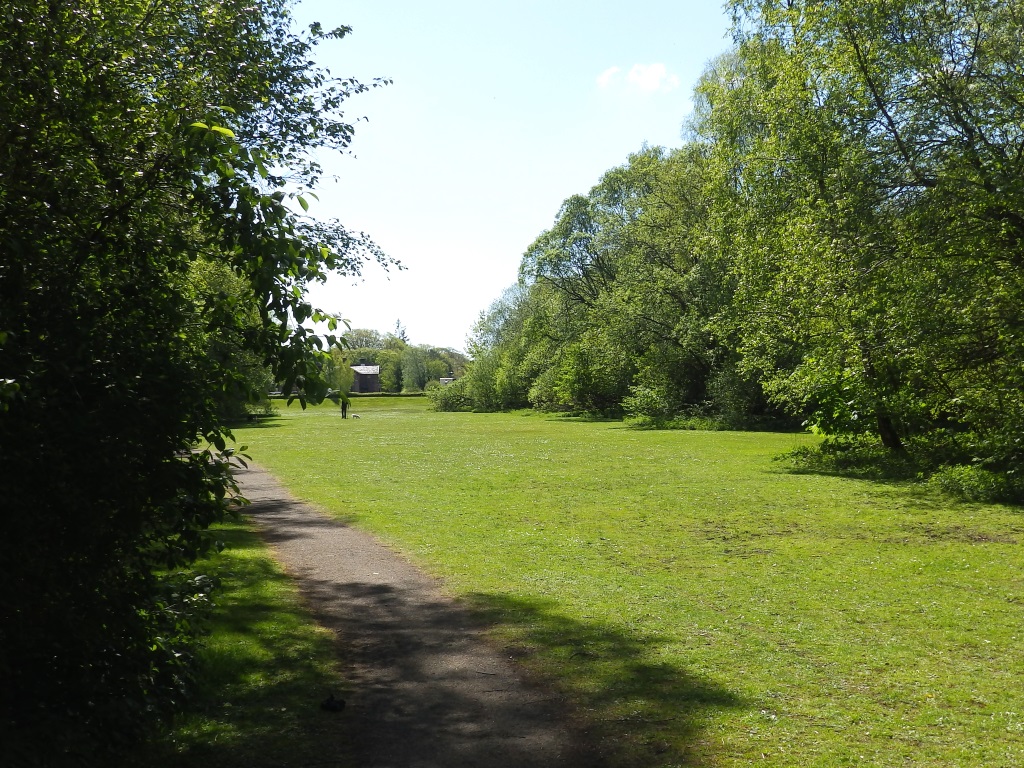 Family oriented, the grass will be free from wild animals and if you've ever been here on a sunny Bank Holiday, in what is essentially Glasgow overspill, you'll know exactly what that means.

All of this will provide a proper link between Balloch and Loch Lomond Shores that, at less than a mile away, claims to be 'Scotland’s most spectacular visitor destination'. 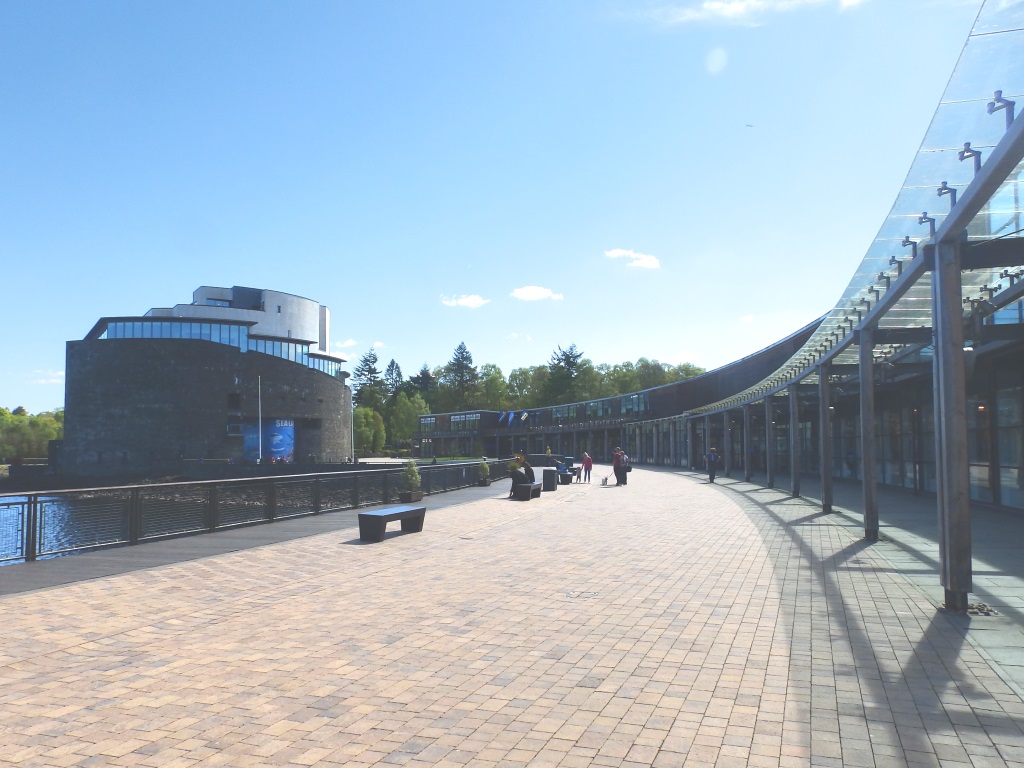 Unlike the road signs from the A82, that's a little misleading because this relatively recent development is mainly posh shopping with not that many options for a sandwich.

They used to let you up Drumkinnon Tower for a free, bird's eye view up the loch but it's a fishy Sea Life™ Centre now and at least £10 for the panorama and the pirañas. 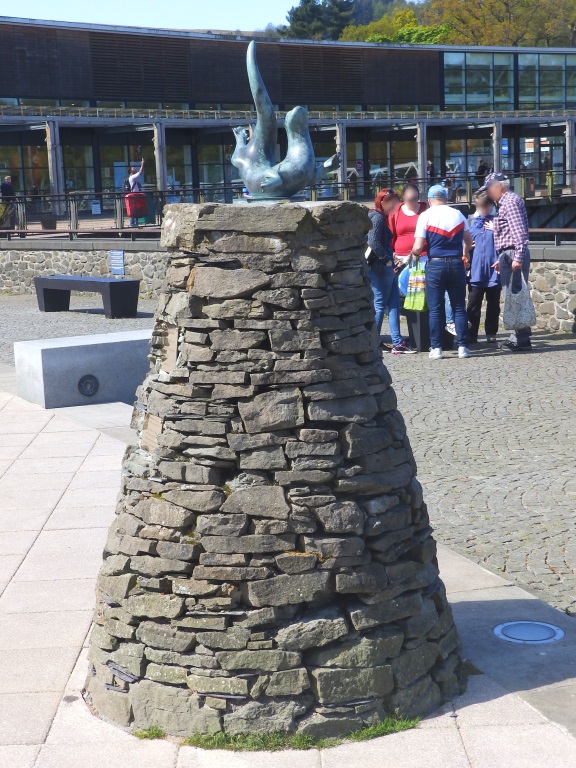 That includes their otters so you'll have to settle for a bronze one outside by Bristol-born sculptor Laurence Broderick.

The largest inland body of water by surface area in Great Britain[1], there's her brother Ben[2] in the background. 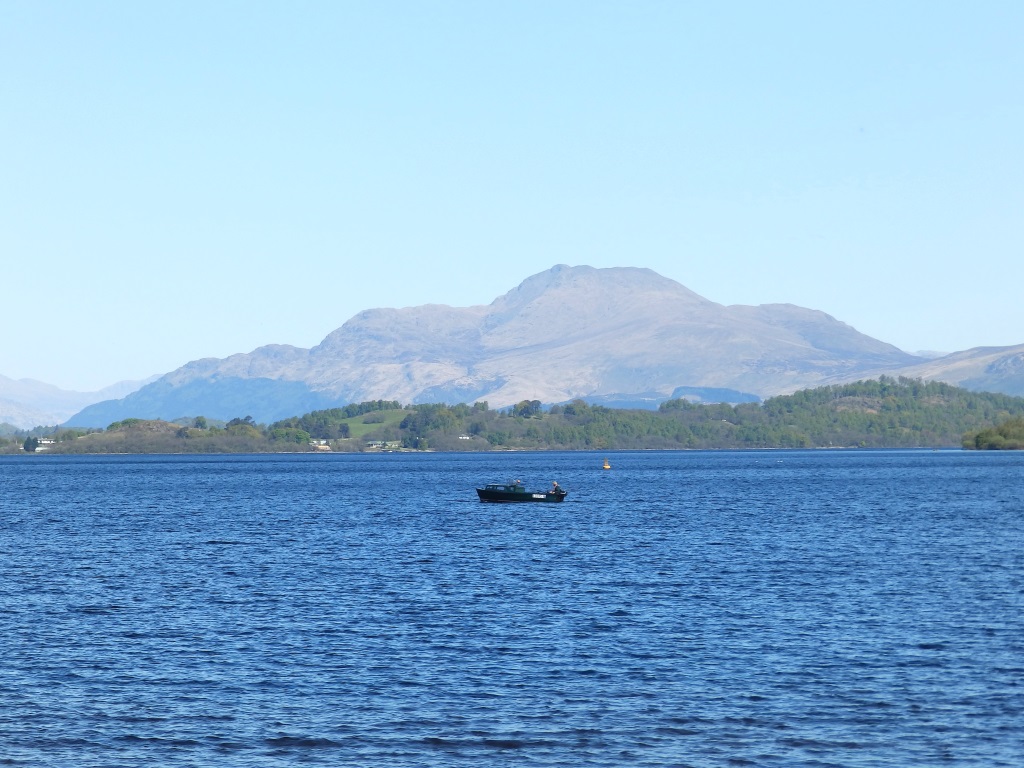 Twelve miles north and Scotland's southernmost Munro, can you believe that SlyBob 'bagged' that bad boy[3] a few years ago?

The ascent is interminable and, even on days like today, there's a gale blowing on top so any plans to do it all again are currently on hold.

[1] There's a couple of whoppers in Northern Ireland if you want to go all UK.
[2] Lakes and lochs are lassies but Bens sound like blokes although that's a form of Bheinn that's a lassie as well. A literal masculation of the feminine noun, this is a kettle of Gaelic gender worms!
[3] See [2].

Despite opening in 2002, it has taken nearly 20 years for the To Let signs to relent and the Shores is only now just about filling their vast car park. This after you-know-what, which wouldn't have helped, but also due, no doubt, to someone suggesting some changes of their own.

The addition of a Bird of Prey Centre, a new 'thrilling aerial adventure course' through the tree tops and some crazy golf, obviously.

The Gateway Visitor Centre used to be just that and although a little too child-friendly, they had a café and inside was informative and interactive. 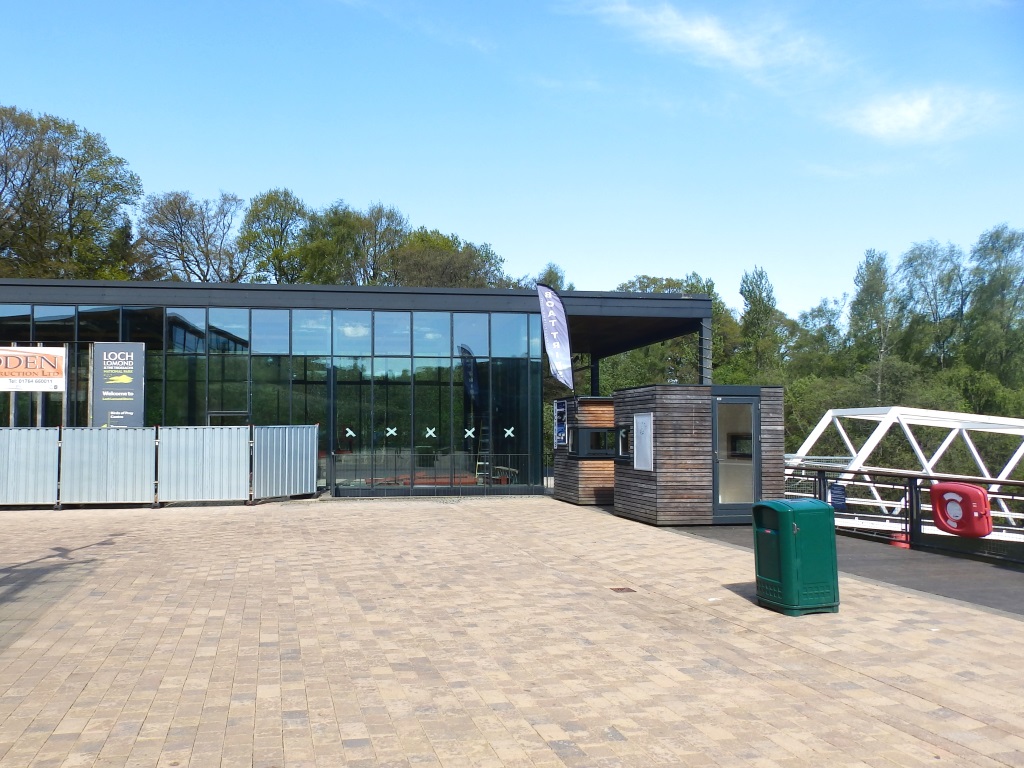 Now it's just inactive and talk of transformation to a restaurant with spa facilities, obviously, was as silly as it sounds.

Looking forward to seeing the Maid of the Loch sailing again, though. This constructed-on-The Clyde paddle steamer was purpose built for Balloch and peep-peeped up and doon the loch until 1981. 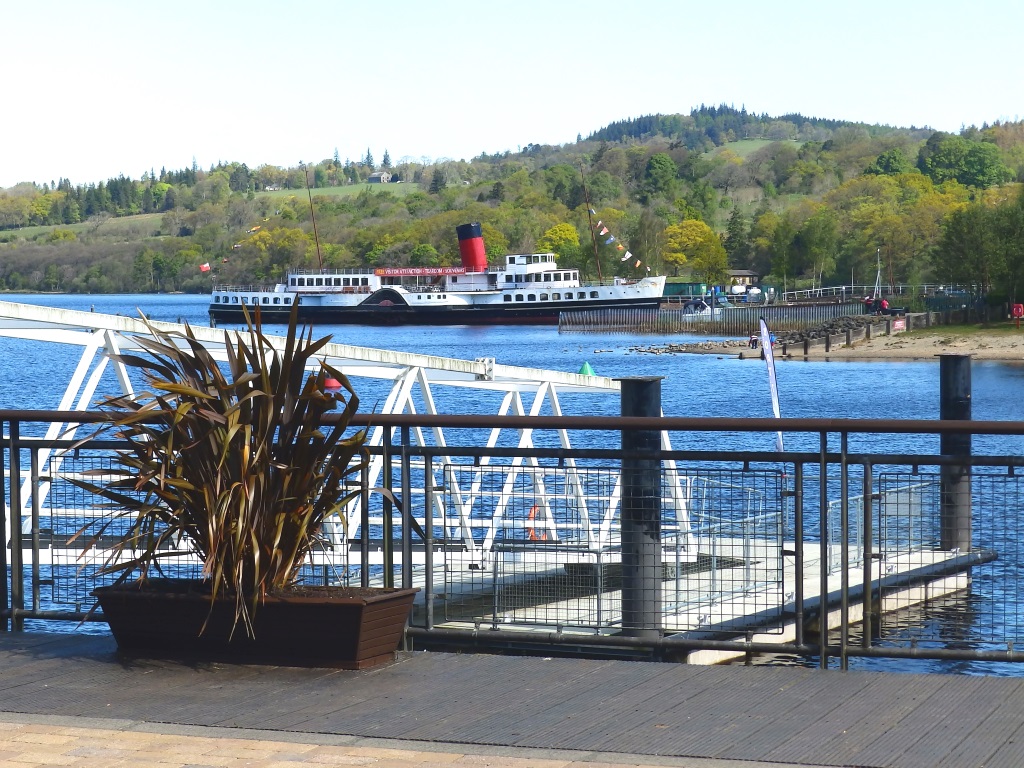 It's currently stationary with just a café and some model boats in it and there's no definite date for a relaunch, just yet. With just the £1.7M required to restore, hopes are high to be up and chugging again in the 2020s.

Now, this is new but it's closer to the Shores than Balloch and does a pretty good impression of a Premier Inn™ with a restaurant and bar to match.

Meanwhile, back in Balloch, head east on the bridge over the Leven to confirm that boating's a thing[1] here then left at the Balloch House pub to enter Balloch Castle & Country Park. 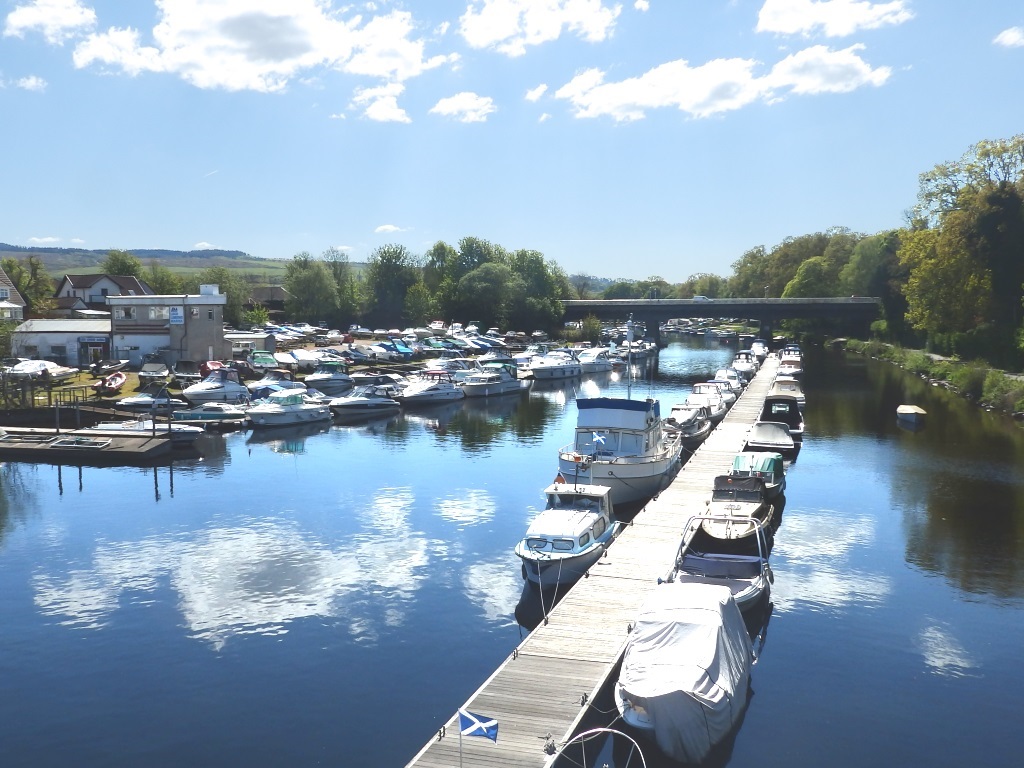 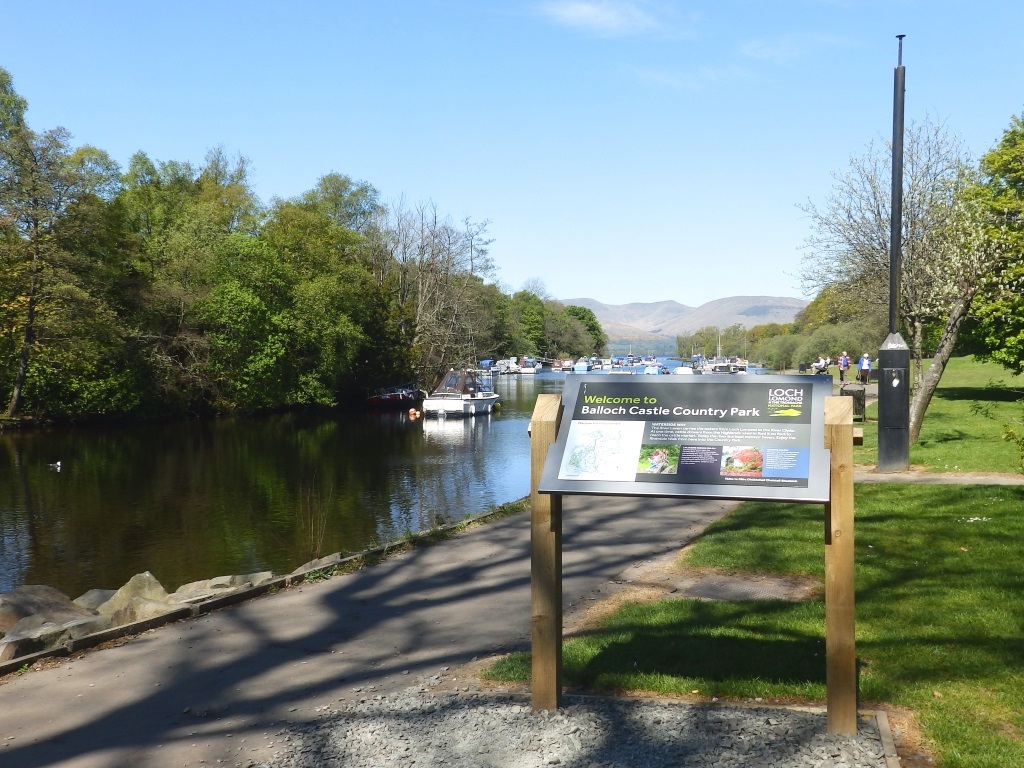 Things are fairly unchanged on the east bank of the river that flows out of the loch and down to the Clyde. 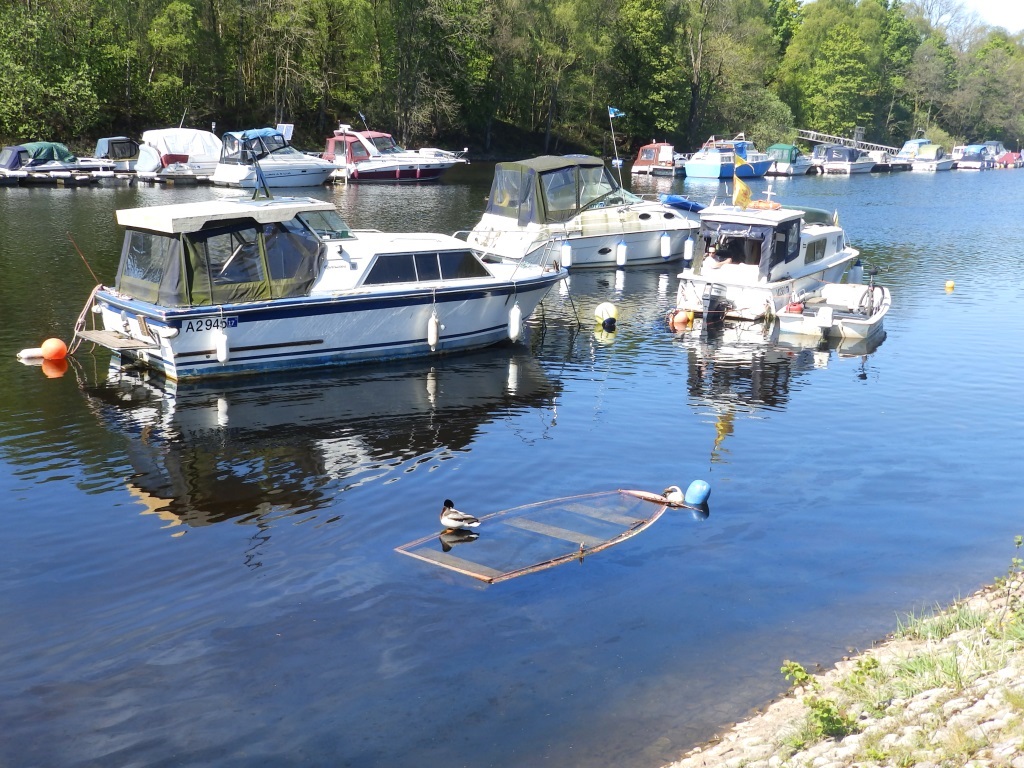 This is heading up to the loch as will all of these craft at some point during the summer. When it's said 'all', there looks to be at least one that won't be and at least one mallard that's grateful for that.

[1] It's like there's a big loch or something nearby?

You'll find them under the bridge and one option is their hour long circular with recorded commentary by go-to Scottish history guy Neil Oliver. 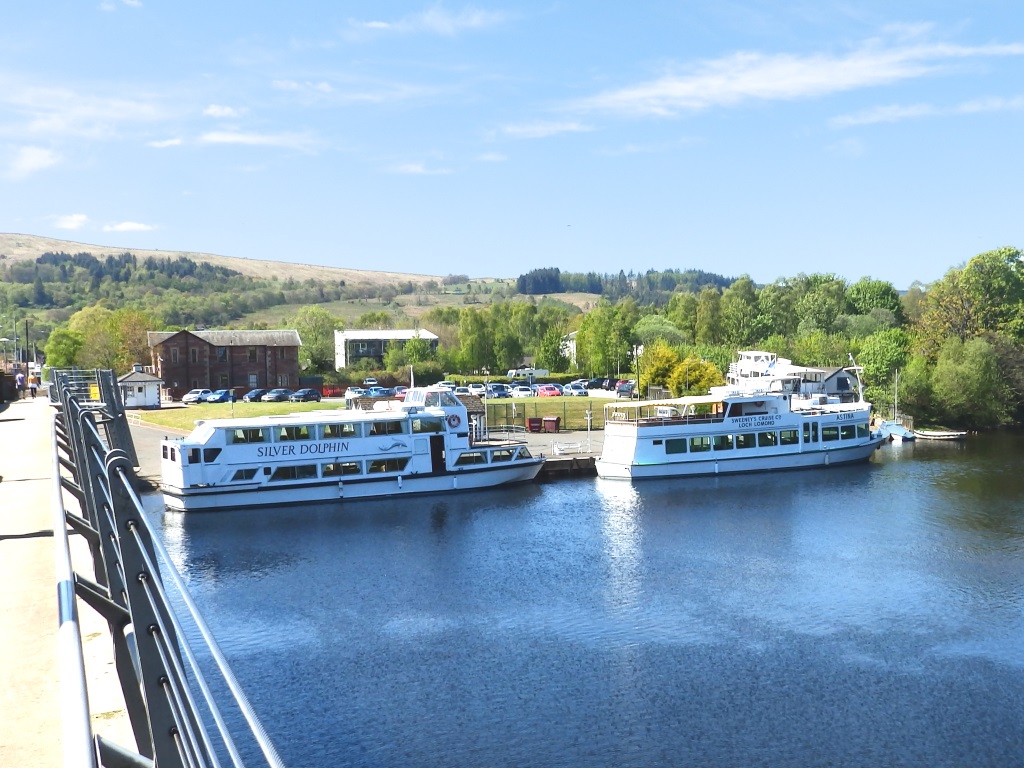 While it's hardly rib-tickling, it's mildly interesting and if you bring the binocs, you might clock the ospreys who have recently moved in, they say.

Further into the park, there's access to Loch Lomond where the banks are indeed of the doubly bonnie variety. 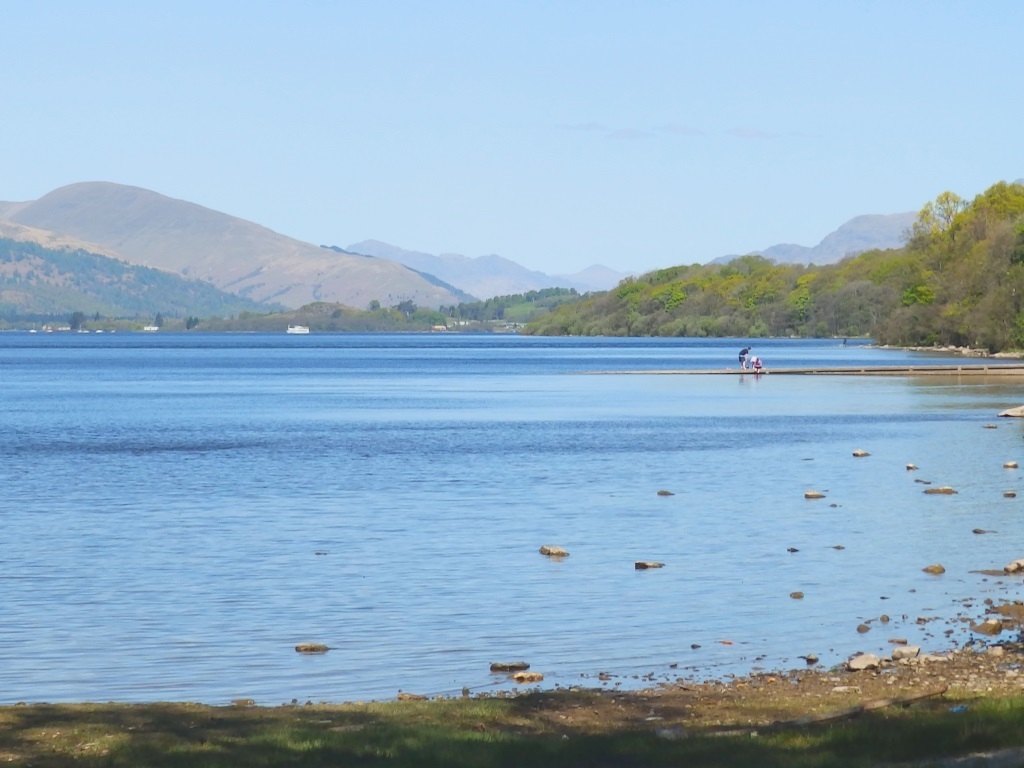 This is just about looking north here and the hills are essentially the start of the Scottish Highlands. Those in the distance are the Arrochar Alps, named after the village nearby and their resemblance to the proper ones.

Up in the Alps, you'll find Ben Arthur that's not quite a Munro but more than qualifies as a Corbett[1][2]. 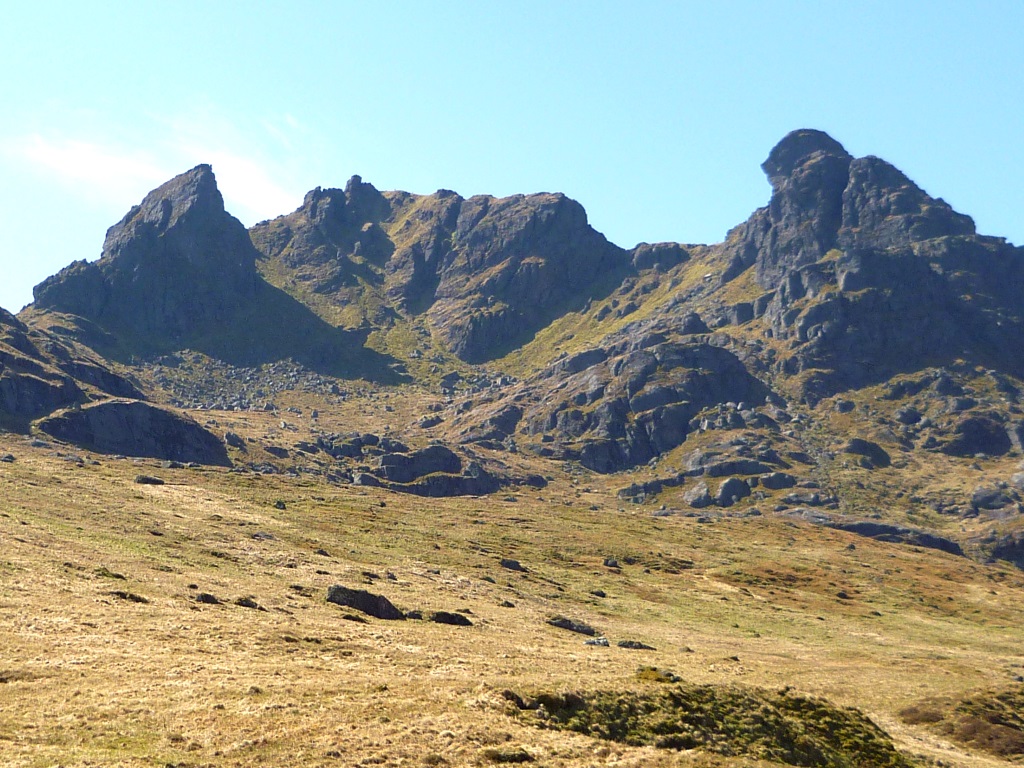 Commonly known as the Cobbler because, if you squint, there he is all hook-nosed and crouched over his shoe anvil. No? Not really seeing it, neither.

[1] Munros are Scottish mountains higher than 3000 feet and Corbetts are between 2500 and 3000 feet. Let's not even get started on the Grahams and Donalds.
[2] Speaking of Corbetts, 'A cement mixer collided with a prison van near Arrochar. Motorists are asked to be on the look-out for 16 hardened criminals.'

Meanwhile, back in Balloch Country Park and behind you, there's a castle that belonged to and was built by the Buchanans and yes, that's the same Buchanans responsible for Ross Priory near nearby Gartocharn. 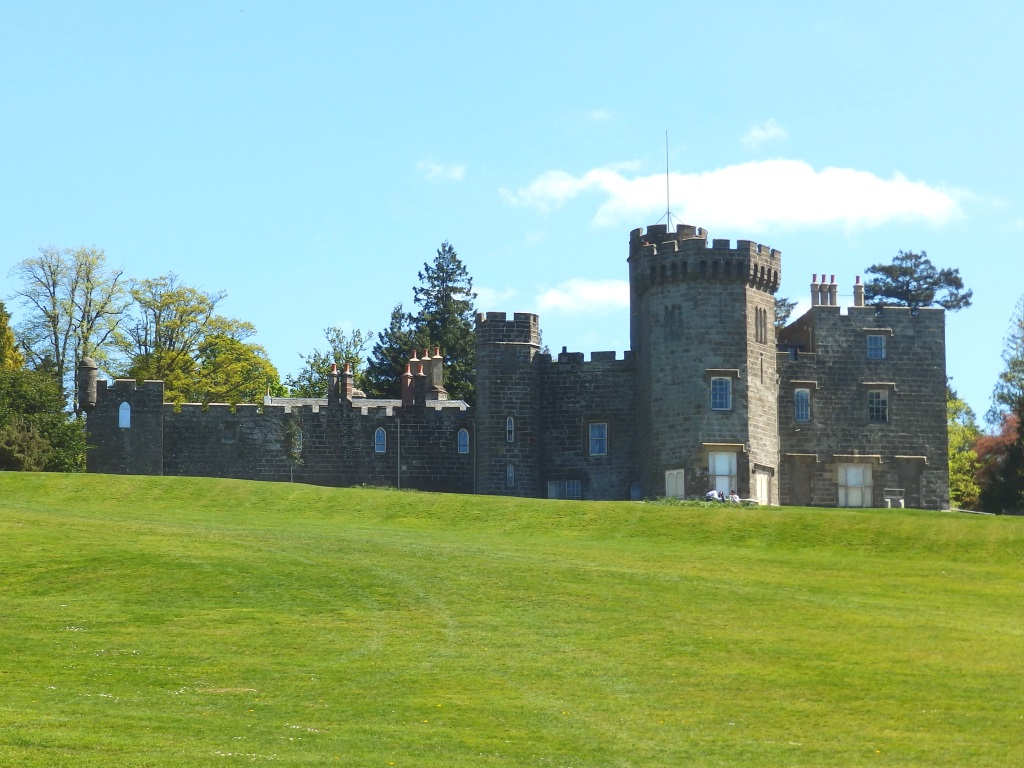 Successful hat manufacturers in Dumbarton, they made a fortune from the fedoras and in the early 19th century decided to demolish and build on the site of a 13th-century version.

Its last meaningful use was as a visitor centre but that was back in the early noughties and it's been designated derelict since then.

No official plans, they say, the contractors are just there to keep you, the winds of change and the water out for now. 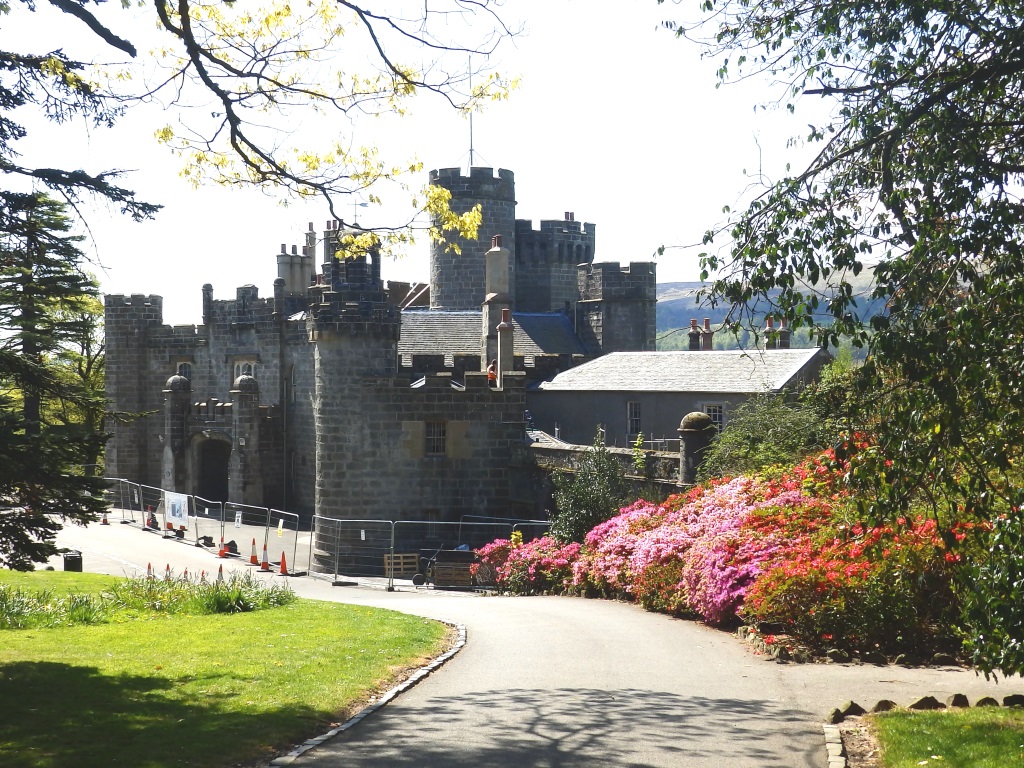 What with the rhododendrons firmly established and work on a new woodland sculpture, though, the smart money's on weekend weddings and a midweek conference centre[1]. Or both? 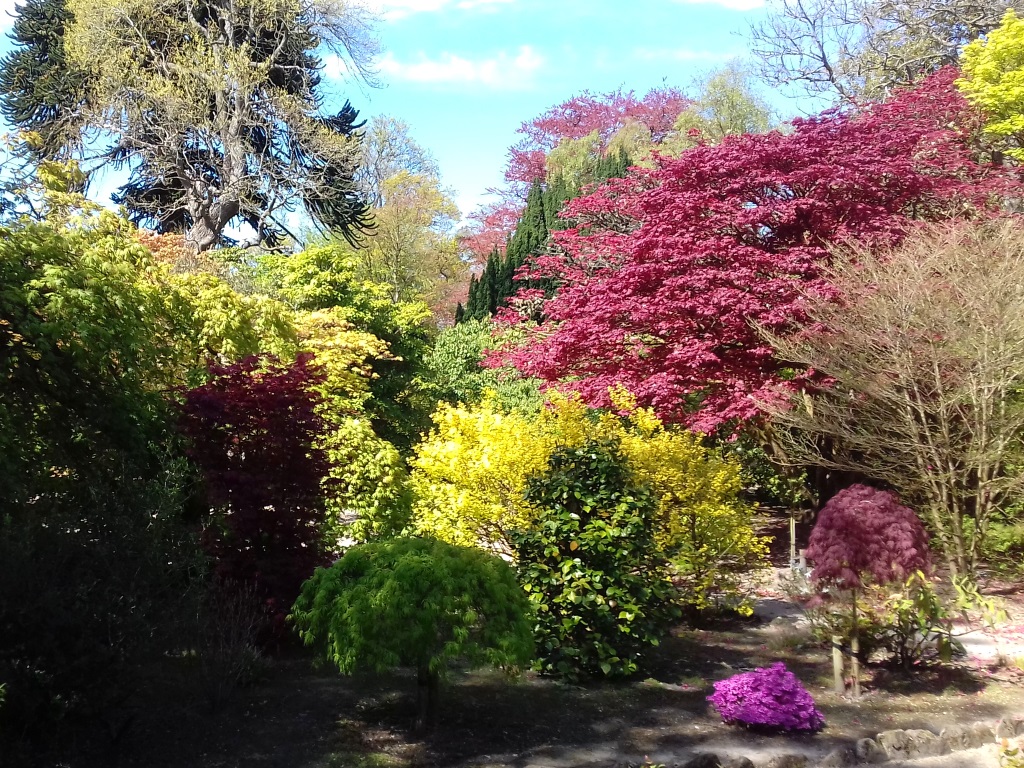 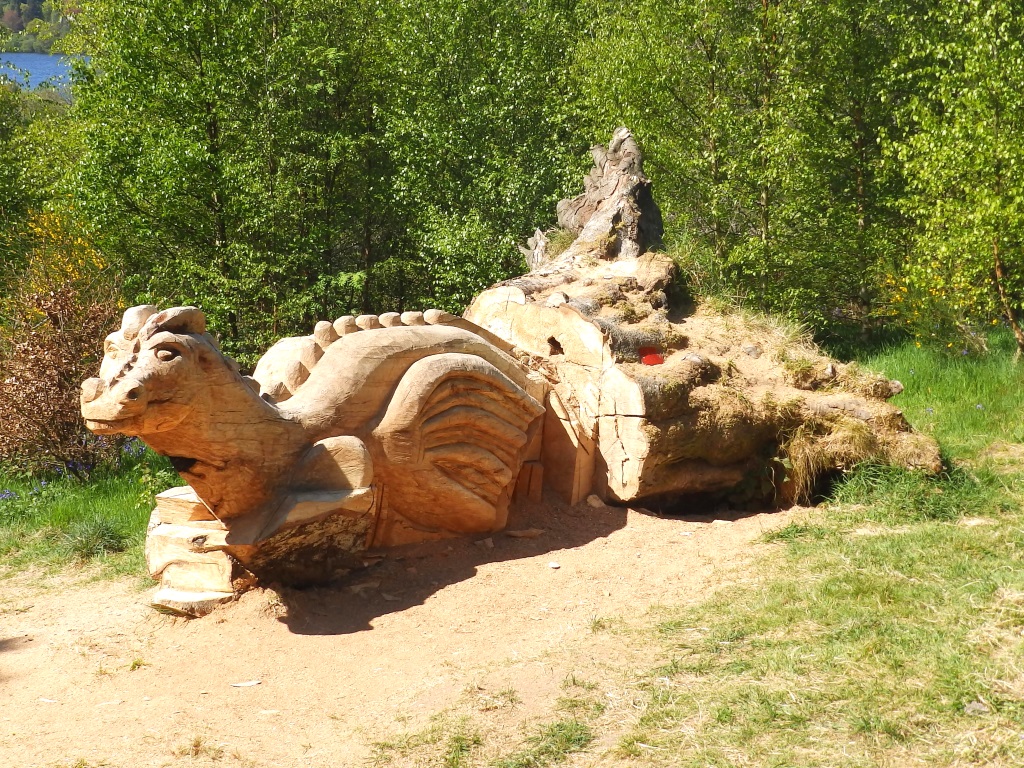 [1] See also any old UK castle that's not too hard to get to.

The road down from the castle brings you past a walled garden, not shown, and out at Balloch's transport hub where you can get to Glasgow via Dumbarton by bus. 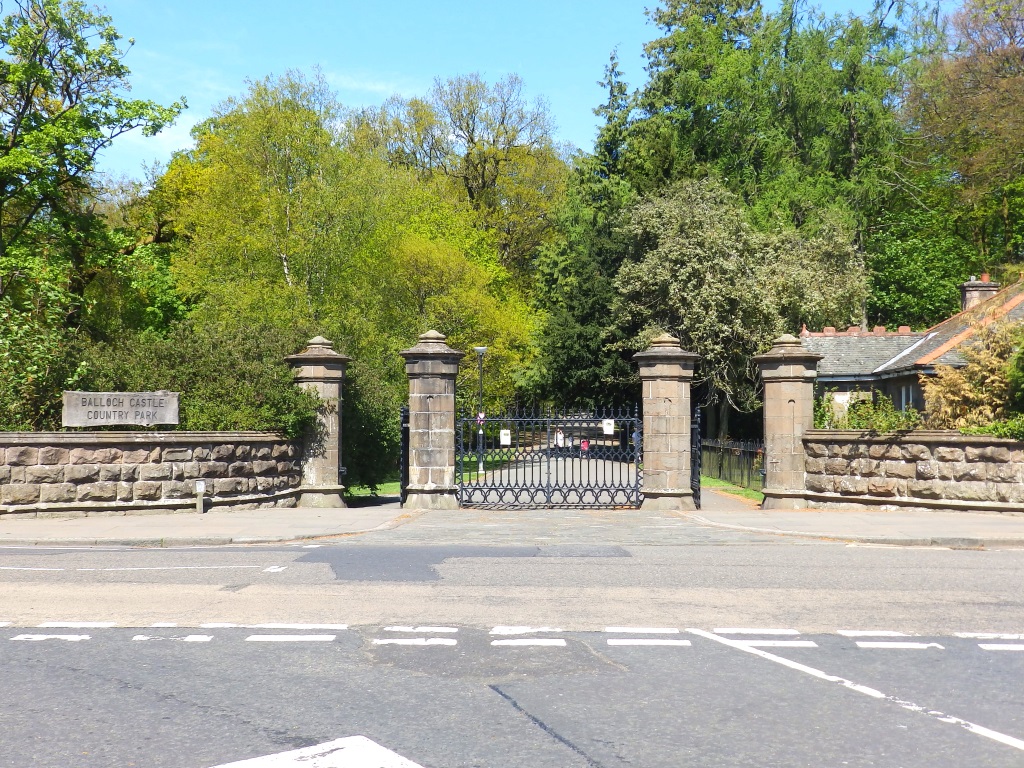 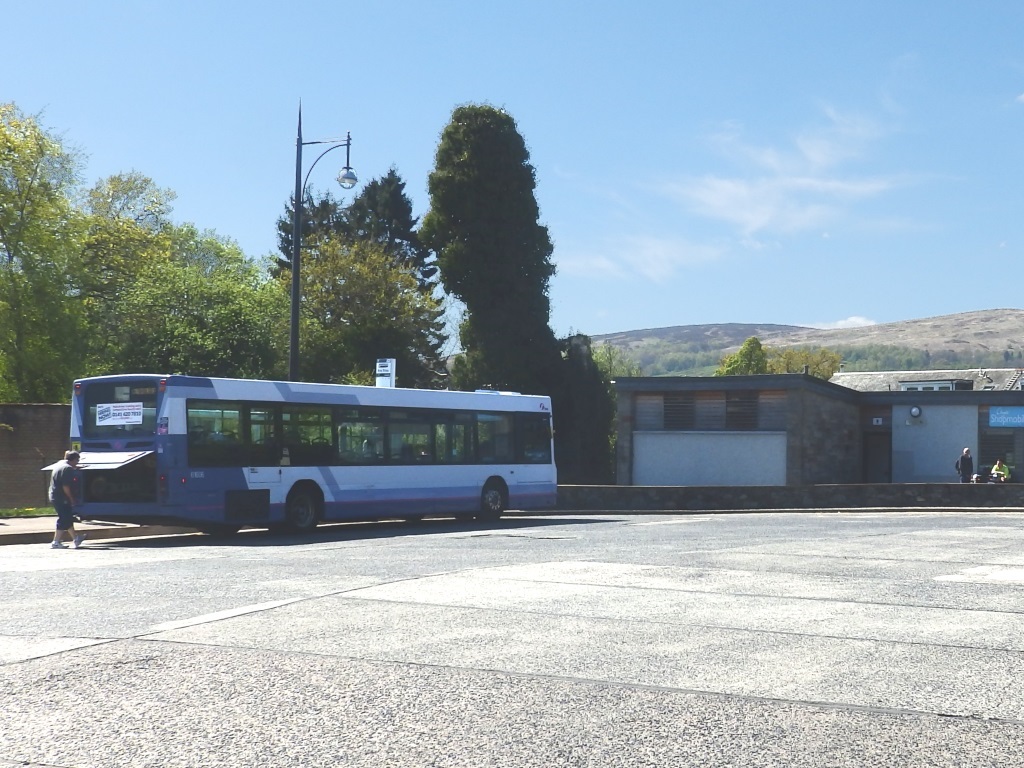 Despite being just 16 miles by flying crow, that ride will take you one-and-a-half hours and although they're fairly frequent, the ones to Luss are less so. 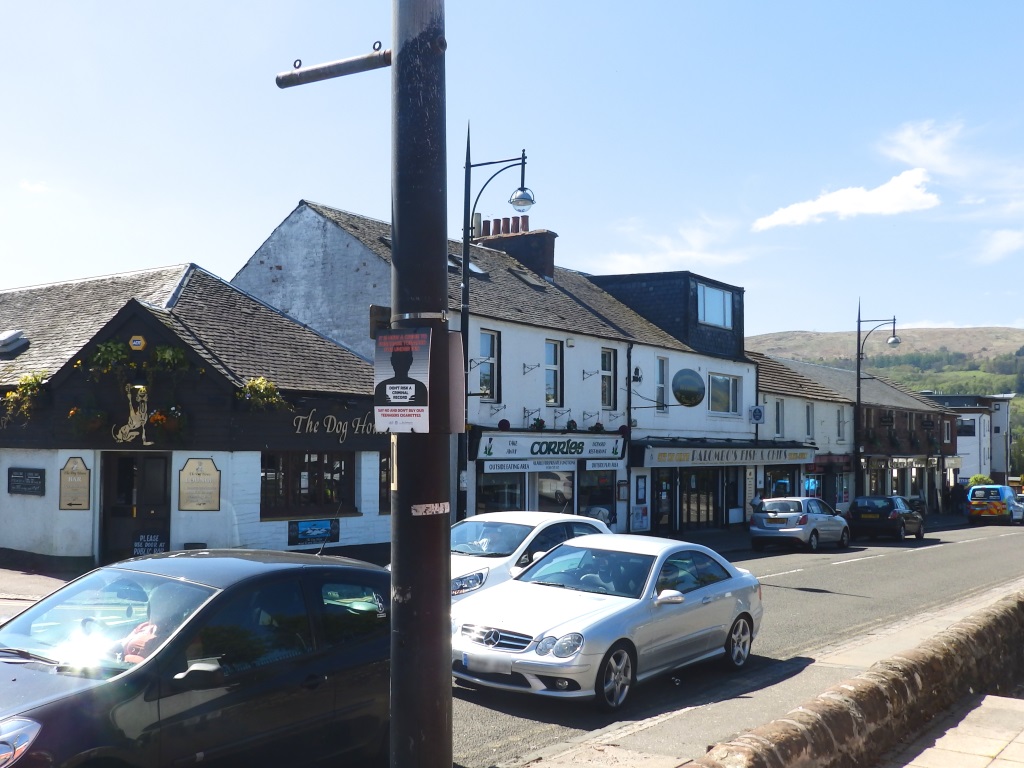 The train will take you half the time and to catch those, head back along Balloch Road where you might be tempted by the fleshpots and\or the fish and chips. It's said 'half the time' for the train unless it's a Sunday when, just like Balloch, it looks like you're changing.

The new Flamingo Land will be set back a bit but along Balloch Road, two new public squares are proposed.

That might entice people to pull over, park up, part with some pounds and even stay, which is, after all, the intention of this collaborative project between Loch Lomond & The Trossachs National Park Authority, Scottish Enterprise, West Dunbartonshire Council and the local community, of course.

Experience should tell you that when words like 'charrette' are bandied about, none of this will be happening anytime soon so, in the meantime, you'll likely bypass Balloch completely and a game of crazy golf at Loch Lomond Shores it is, then.

A pair of pub-dining dynasties are the chief sustenance providers along Balloch Road and are both slightly better than you might expect. 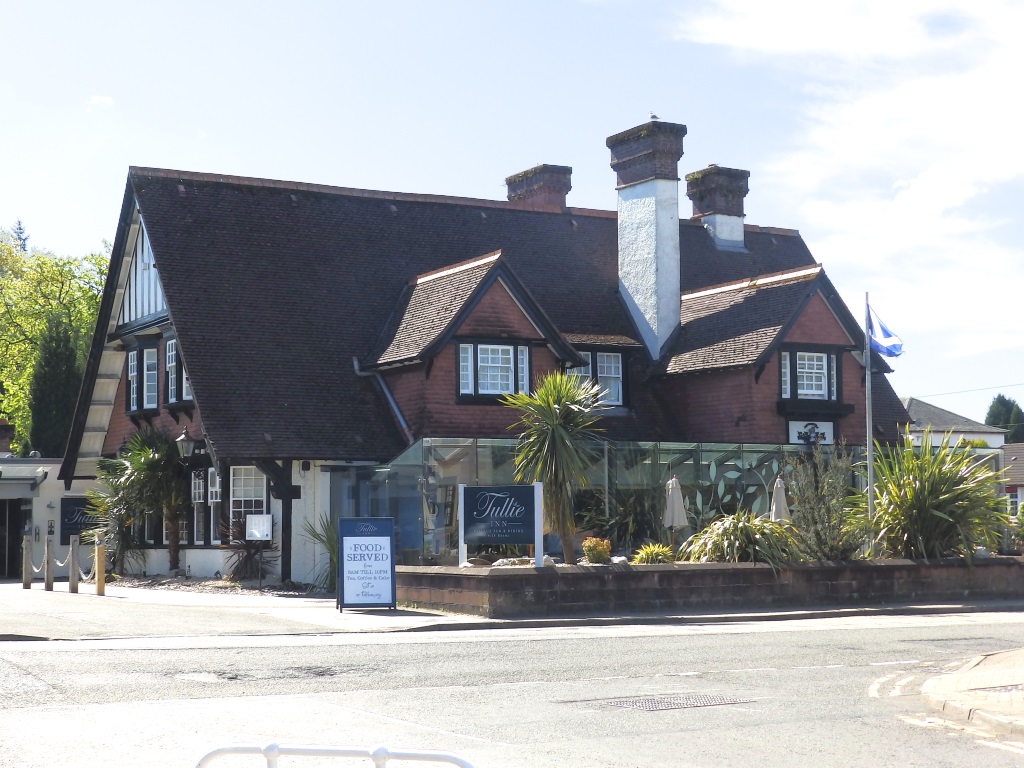 The Tullie Inn and Balloch House both support supping outside, when in season, and the former includes a selection from the excellent Fyne Ales brewery, which travels the 30 miles very well. Changes are afoot, however, on the fine-dining front and you don't have to look and book far.

Occupying the space vacated by a short-lived Indian-Scottish fusion operation called 'Bombay Jocks', seriously, the Pier Kitchen & Bar is only what Balloch has been waiting for, advising trippers say.

Des and his front-of-house team deliver a level of attention to detail not often seen outside of those with or chasing a Michelin™ star. How the kitchen manages to juggle a succession of burgers and 'classics' with perfect parsnip purees during a brutally busy service is miraculous.

The team behind the Pier cut their teeth up at Cameron House, you see, and they'll be hoping to coax some of those customers down. Cameron House you say?

'Five-star luxury on the banks of Loch Lomond'[1] and the luxury extends to their estate of lodges.

They're part of a 'cooperative property ownership scheme' that definitely isn't a timeshare because, with a timeshare, you pay a lump sum up front but then you're tied into an exponentially rising annual management fee and a guaranteed loss when you come to sell... hang on a minute?

It might be a hut on stilts but it means that Sly has six out of every seven birthdays in Balloch and SlyBob blummin' loves it here! 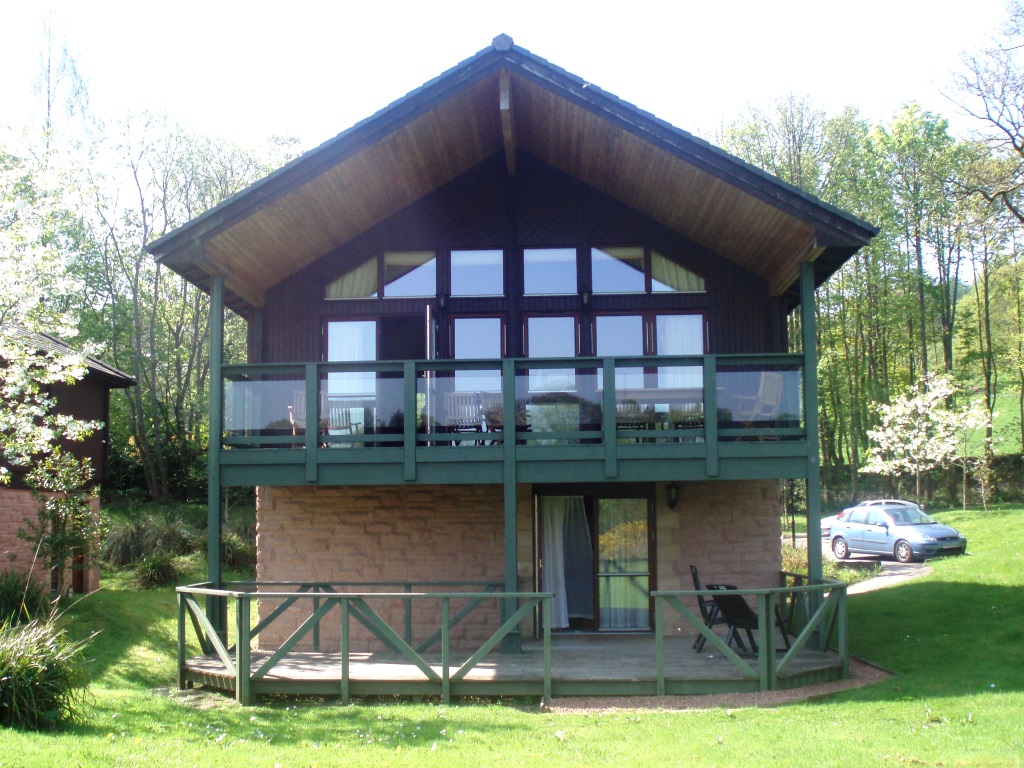 [1] Following the tragic deaths of two people in a fire in December 2017, the hotel and facilities remained closed until autumn 2021.

Following the fire, the former Michelin™-starred Martin Wishart at Loch Lomond restaurant required a reboot. Head chefs of a certain age tend to be classically trained and with that comes a degree of dining formality where supercilious, French waiters top you up in silence but that's what's expected and partly sustains the star.

Younger talent tends to be more relaxed but the downside is you're served by an inky hipster who wants to be on first name terms within two minutes. No, SlyBob don't think we're better than you, we're just not very good at chit-chat.

It's not known, then, what the current experience is but they've let this pair in the past in twice. The last time, Kelly Brook, careful now, was on the next table sharing a chateaubriand. The first time, an older lady was distressed by the view outside of a duck with a damaged wing. A fake, kilted ghillie was sent to deal with the situation where he wrung its neck behind the bins, probably.

On resuming their repas, 'For madam... the duck!'