There are bell towers on the horizon but that mainland train station at Mestre doesn't look like somewhere you want to be hanging about of an evening. Despite the distant campanili, most of what you can see from your approach on a two-mile-long bridge is just a busy, industrial waterway.

Alight at the Stazione di Venezia Santa Lucia and walk out of there backwards. That way, the utilitarian theme continues and the modernist style of the station building will be the last, modern thing you'll see this afternoon. 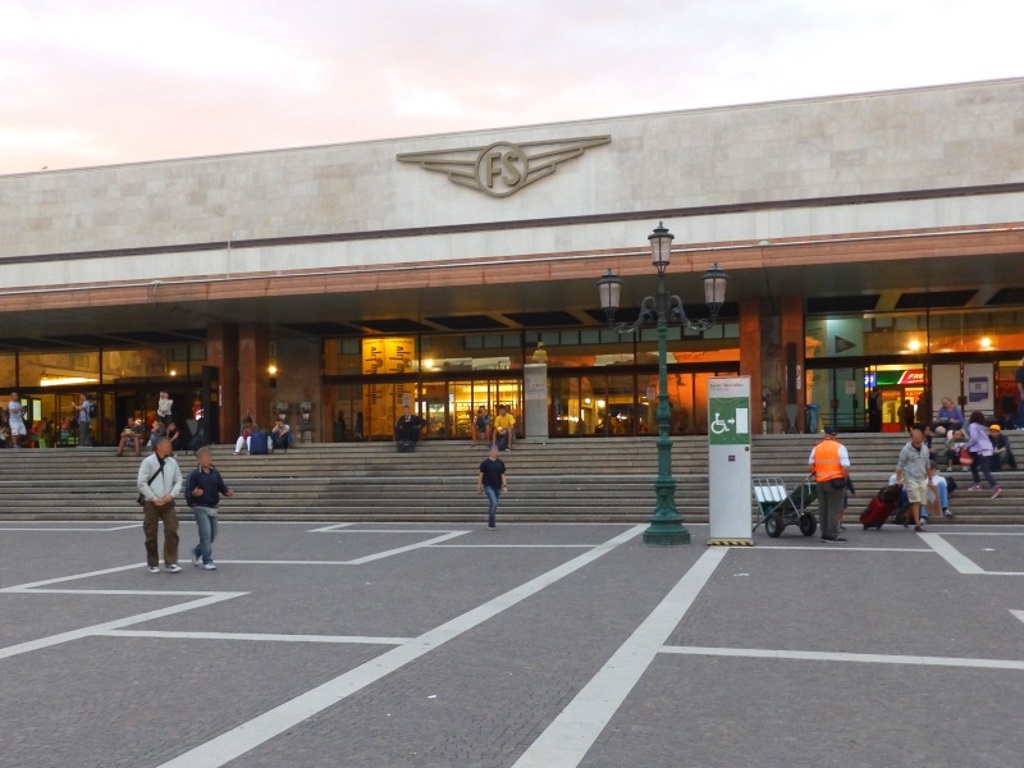 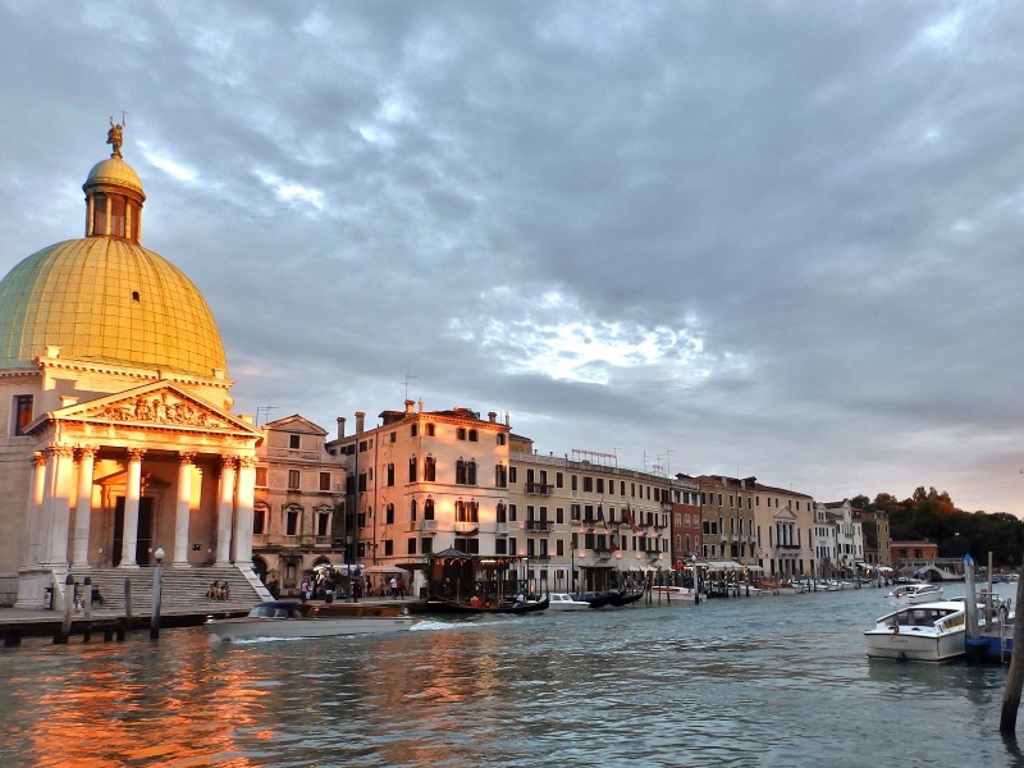 Because, when you turn around, it looks not a little unlike this, you see, and sì signor, you might well have just found yourselves in Venice and the sight will make you laugh out loud.

The reason for the train? You're trying to do this trip on the cheap, aren't you? You could have flown into Venice's Marco Polo airport and taken an expensive, private water taxi to your central, canalside hotel where you'll be banging on the walls for George Clooney or Madonna to keep the noise down.

Ryanair™, however, will drop you into Treviso, which is an hour away by bus[1], so, you'll settle instead for staying somewhere halfway between with a station.

[1] Not quite as far as the audacious airline's Frankfurt claim, which is three times that.

Countless bridges here, of course, but just the two[1] over the Grand Canal, Venice's main body of water.

It snakes an inverse 'S' south and, let's face it, you're heading down that way anyway to the Piazza San Marco or St Marks Square if you'd rather so you'll need to cross the Ponte degli Scalzi. 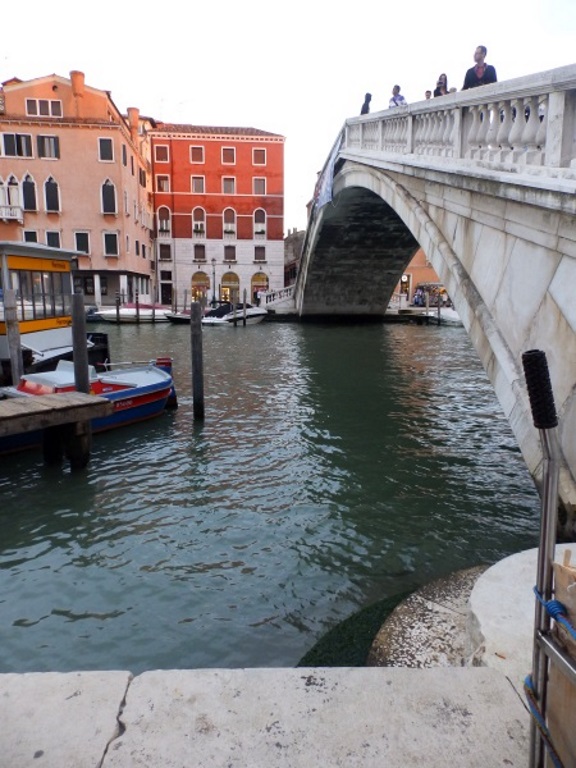 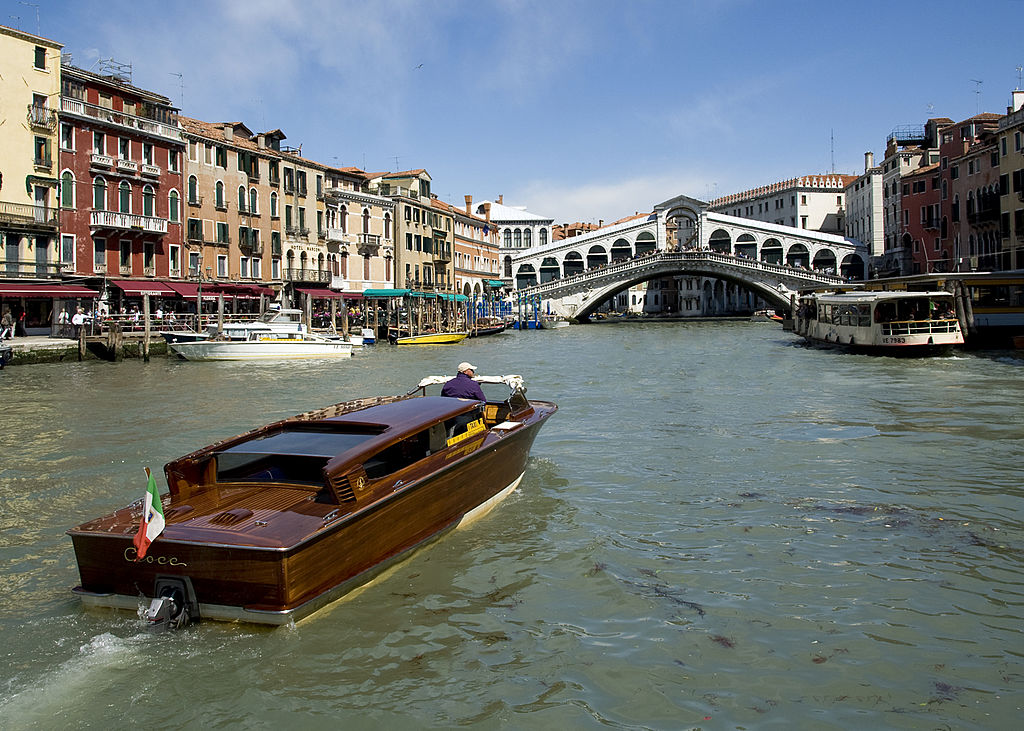 Over there, you and a million others will all be syphoned down the same side streets to the much better known Ponte di Rialto but you try getting a snap of that without the back of someone's nut in it!

You could, of course, take a water 'bus'[2] if you're not so frugal to fork out for a reasonably priced day pass at the, fairly easy to fathom, ticketing situation just outside the station but where would the frustration be in doing that?

[1] So there might be three.
[2] Vaporetti they call them round here unless you want to go all Venetian when they become bateo but more on that in a minute.

Today's a bit of a drizzler but down at St Marks, the 16th-century arcades provide some shelter.

You will, however, have to pay to kill time anywhere indoors and if you're still scrimping, you might want to give Caffè Florian a miss. It's knocking €20 in there for a couple of cappuccinos although that string quartet should've been a clue. 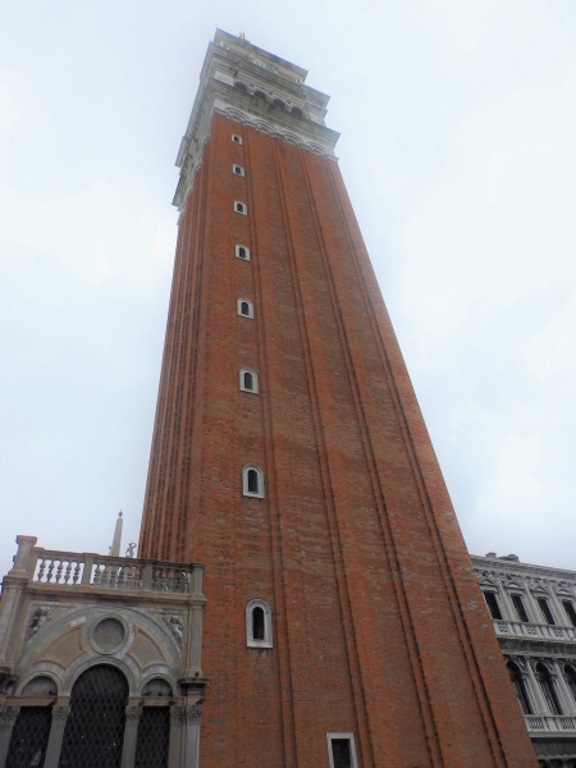 Venice is sinking, you see, and centuries of seasonal flooding reduced the foundations to custard causing the 16th-century original to collapse in 1902.

This one's built to the original's scale but it's going wonky as well and there's a current plan to secure things with an underground, titanium ring of all things. That and any potential wobblies[1] aren't the reasons for not going up there in a lift, not even the entrance fee...

Nah, the queue was nearly back to the train station.

That bell tower belongs to the Basilica Cattedrale di San Marco, which is a fine example of Italo-Byzantine architecture, apparently. 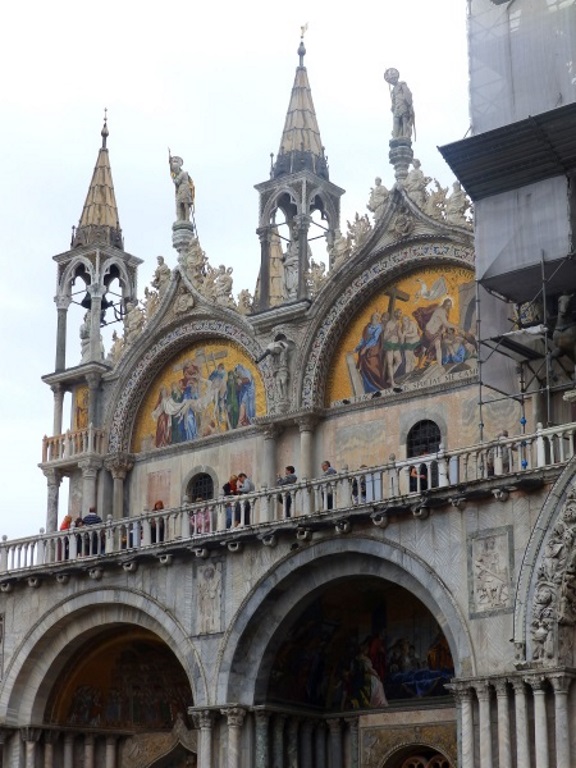 Some bits are visible but the scaffolding and the cladding have been up since 1994 and aren't due down until May 2017 when a fine example of Italo-Byzantine architecture will all be back on show.

To the right of the cathedral, the Palazzo Ducale or the Doge's Palace if you'd rather and most travel-blatherers would leave it at that because 'Doge' is an everyday thing, right? No? Not having that, neither. 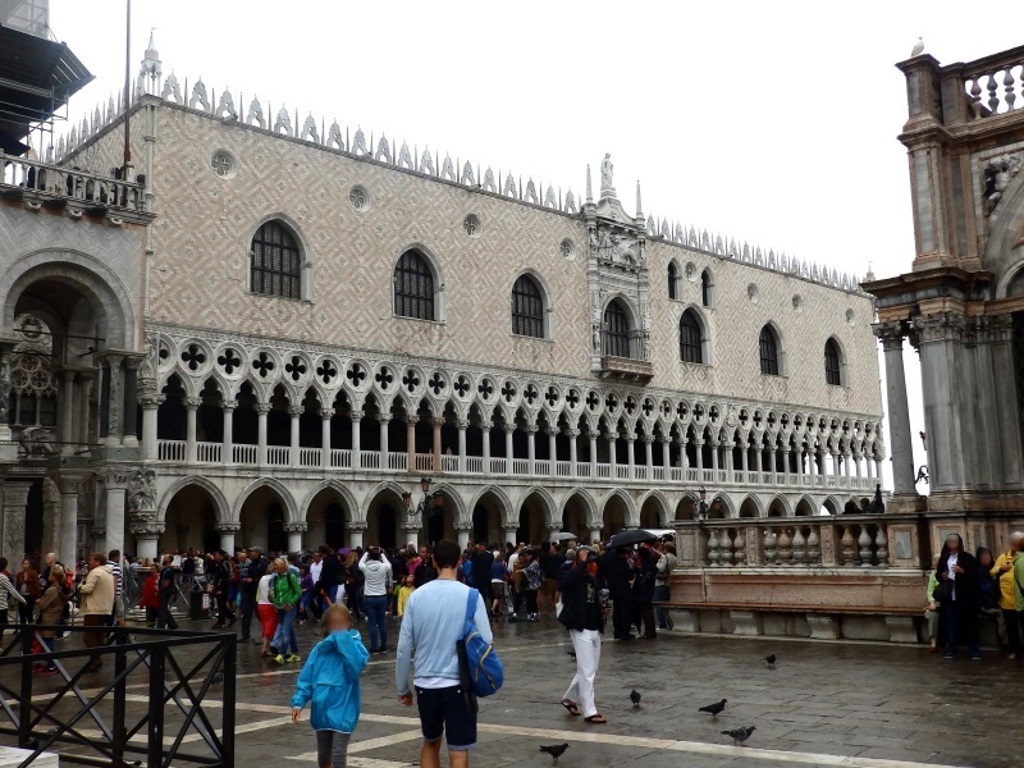 The system of electing these city leaders for their lifetime began at the end of the 8th century but given their generally elderly nature, life expectancy being what is was 1,000 years or so ago and machinations, military and political, they tended not to last that long.

Largely confined to the palace, it really was a Doge's life[1] and 120 have held the title, the last in 1797 when Napoleon Bonaparte invaded and decided to tweak the job title.

The position was largely equivalent to that of today's mayor but no sign here of any free bikes or a  bloke stuck on a zip-wire waving i tricolori.

[1] It's known that reads better than it sounds but with Game of Thrones about to finish, this is currently being pitched to HBO™.

Or St Marks Square if you'd rather. Obviously, you'll end up here at some point and if you're inclined to linger, the basilica's free although there's a paid option to skip the lengthy queues.

There's a fee for going up the bell tower in a lift as is there for the Doge's Palace and a bewildering number of ticket combinations for various other museums.

You can just say you live here when everything becomes free but best of luck learning the local lingo, it's a right bit of dialect, apparently.

Still here? Good, because the Doge's Palace is probably best known for the Ponte dei Sospiri or, as Lord Byron claims to have coined, the Bridge of Sighs, of course. 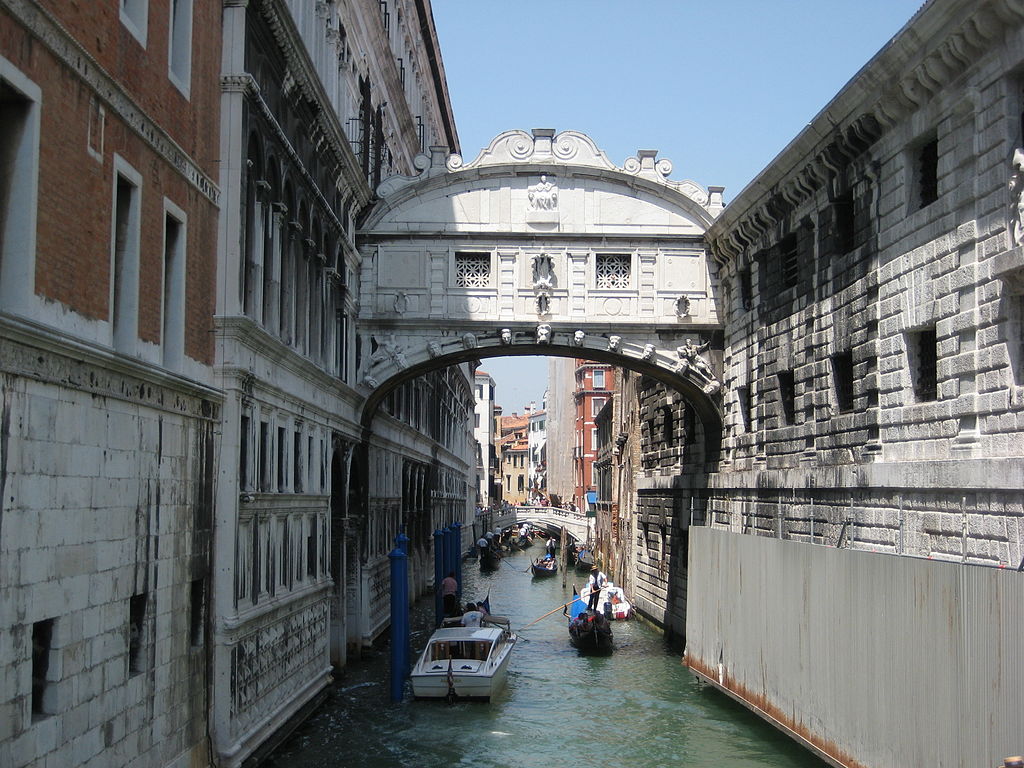 Given that's, literally, a literal translation, the Grand-Touring fop is getting away with way too much credit here. As is whoever romanticised the idea of prisoners giving a final suspiration at their last view of Venice on their way across to their execution.

The petty prisoners were for real but not this corny misconception since they'd largely suspended the use of the noose, for all but the most serious misdemeanours, by the time the bridge was finished in 1600. Venice is barely visible from those tiny windows and there's just as good a view of the skyline from the cells, apparently.

You'll need to pay to see the internals, of course, but you can go under it in a gondola.

Speaking of which, if you're still counting the coppers, that'll be €80 for a 40-minute trip, then? Some are more elaborately adorned than others and this one comes with its own little, Italian egret. 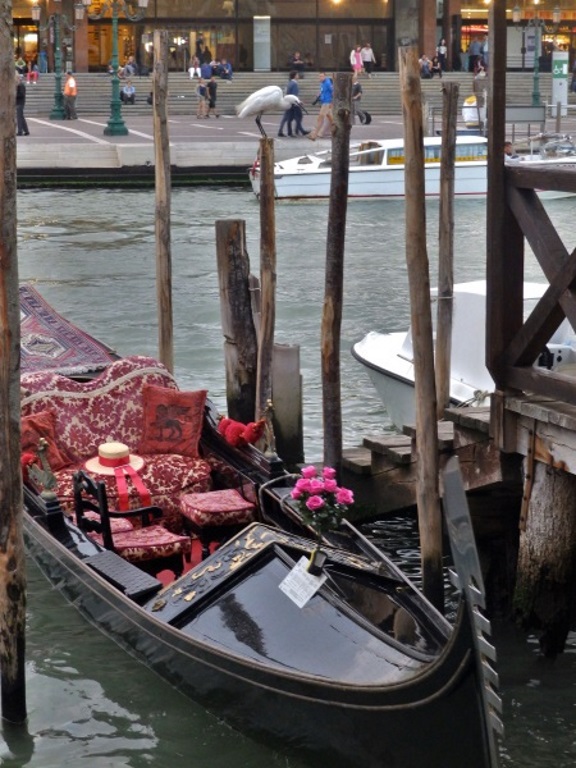 That's still an awful lot of money to pay to reminisce about  ice creams, though?

If the words 'romantic' and 'seasick' don't normally sit well with you then neither will your lunch in today's Moderate Breeze[1]. You could, however, always bring your own transport. 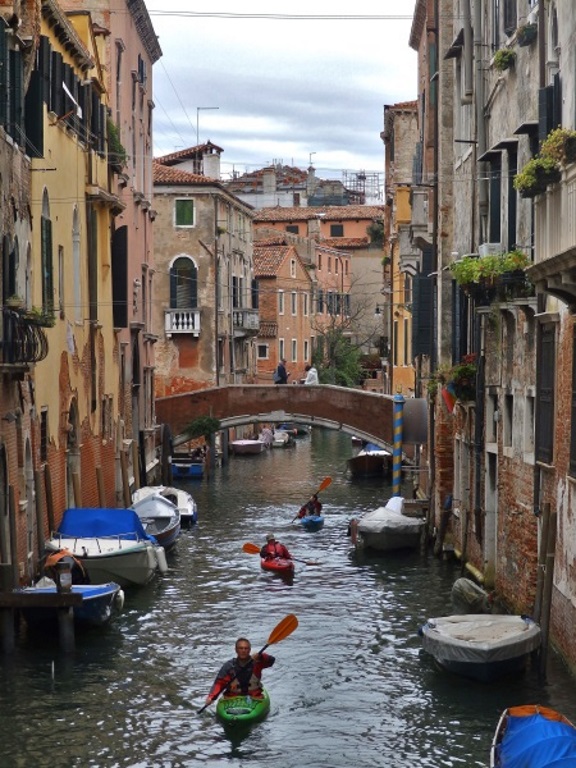 Some people really are quite mad, aren't they?

Remember that first bridge you crossed earlier, just outside the train station? Well, this time, don't bother and head straight on over a less grand canal into the area of Cannaregio where the streets seem wider and there's not quite so much water.

Guardian™-writing types describe the Rio Terà S. Leonardo as a tourist trap[1] and advise you to go, all smug and superior, into the side streets to snack on cicheti and to sip spritz al bitter like a native. 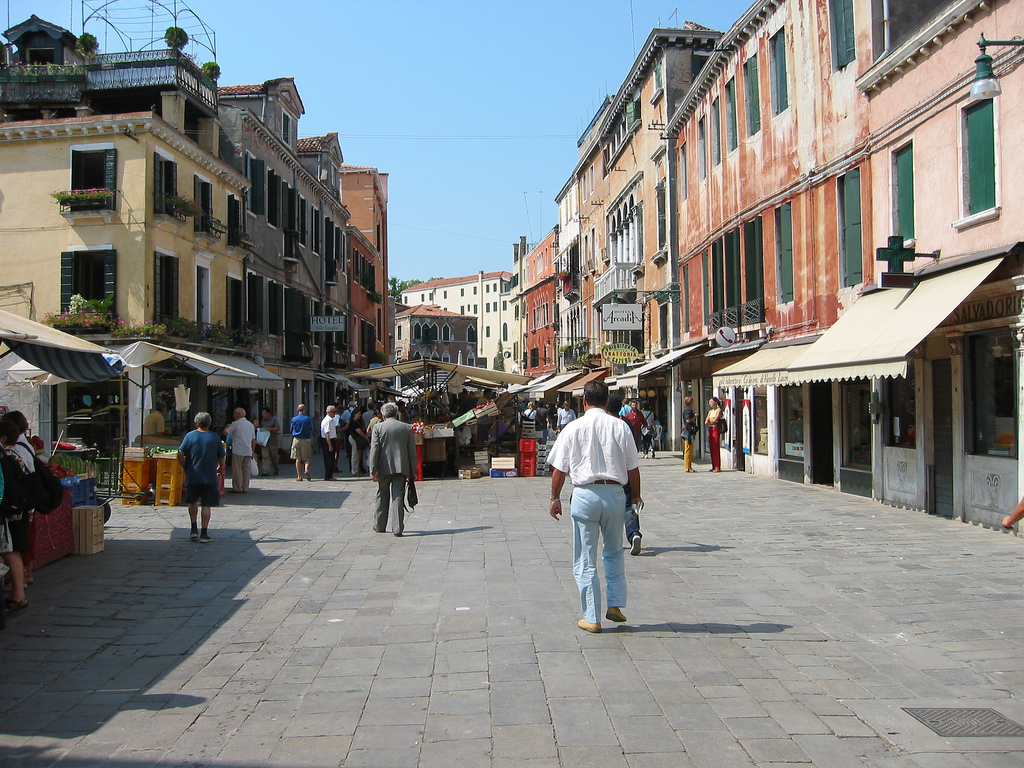 Enjoyable enough and thanks for the tip but are oily, vegetable-based bar snacks and watered down Campari™ really 'to die for'?

[1] Just the 10th most visited city in Europe then?

You'll pass through Cannaregio on the way to the Arsenale or the shipyards if you'd rather. At its peak in the 16th century, the yards provided most of the Venetian Republic's navy and largely account for there now being no trees in the surrounding countryside.

It's state owned and you're not allowed in, the Porta Magna is as far as you'll get. There's still a small naval presence in the Arsenale but just like their near-namesakes in North London, there's been nothing of any European significance for at least 20 seasons. 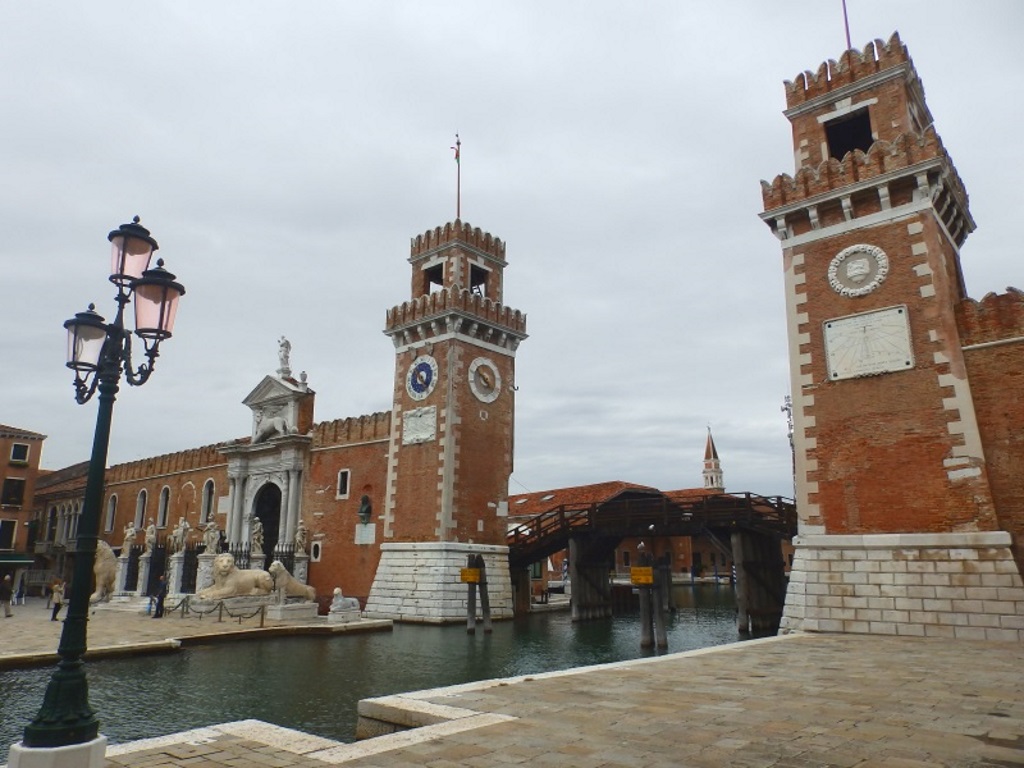 Why be here then at some shipyards that you're not allowed in? Only because it's not too far, to this point of faint interest, from the Vaporetti, remember them?

In case the geography of here isn't clear, Venice is the largest of around 30 inhabited islands in a 200 square mile and not too deep a lagoon. To get out into it and at the surrounding isles, Murano and Burano in particular, they'll ferry you out from the landing at Fondamente Nove.

It was actually at the landing that the most middle-class utterance, ever, was heard. Two middle-aged couples parting company... 'We're going this way for our Vaporetti.'

Not wishing to be picky[1], I think you'll find it's Vaporetto - masculine, singular noun, you see, unless they were taking two? Stuck with her for the afternoon, Bob would be wanting a separate one as well.

Fantastic pasta and pizza with separate kitchens for each and chock-a-block full of locals. 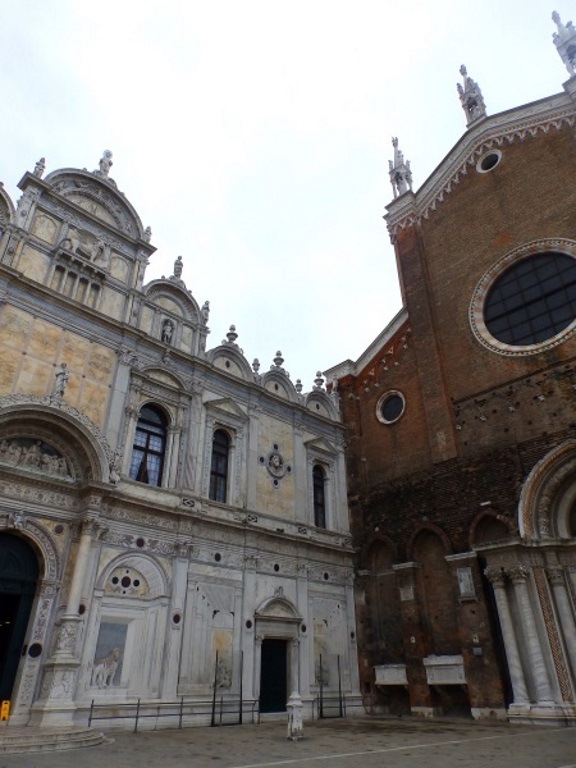 Just along from the Basilica dei Santi Giovanni e Paolo, these Italians really do know how to do lunch, don't they?

Twenty minutes away by water although if you accept that Ryanair™ has duped you, Treviso is three times that by bus. Either way, is it worth it?

Leaving the train station, that first view of a canal and a palace will make you laugh out loud but then the 16th-century surroundings lose the shock that they should.

The rhyming islands aside, an over-familiarity, perhaps, from  Don't Look Now through to too much Tomb Raider™ II and every TV travelogue-er, ever, having something to say and see about the place?

By all means, eat like a native in the side streets but you don't really need to come here to do that. After a couple of Aperol™s, though, and with the rain now gone, the place is actually starting to be quite liked.

This area is in and around the university so there's a youthful vibe and a chance encounter with the Aperol™ Spritz. Aperol™? Watered-down Campari™. Aperol Spritz? Watered-down Aperol although it is watered down with Prosecco.

They were trying to push this stuff in Departures on the way out from Stansted but you might have better luck in Arrivals where everyone will have a taste for it in four days time.

More Aperol™ in this bar\restaurant although, because of the location, the €euros are up a bit. A small price to pay for a hypnotic sunset over the Grand Canal while you wait for that train. This place is actually starting to be quite liked.

This one will distract you for an hour and there's a metal, stick-man sculpture outside in a state of erm, arousal? That will have the kids giggling and you get here over that previously undiscovered 3rd bridge over the Grand Canal.