The origin of the name might be a load of bull but it's all about the ball now and this one is oval-shaped. Egg-chasers, Pimm's™-sippers, gentlemen in the stands, hooligans on the pitch.

Not that SlyBob know anything beyond that and the number of games that've been seen through to the end could be counted on one hand-off. Rugby, of course, but if you could just explain that  offside rule again?

Benetton[1] Rugby Treviso play in the Guinness PRO12, a professional, European, rugby union league comprising teams from Ireland, Scotland, Wales and Italy from which seven of the dozen qualify to play against the best of England and France in the European Rugby Champions Cup with each nation always represented by at least one team irrespective of their final league position and an additional chance to qualify via a four-team playoff regardless of that nation already being present making the whole process as complicated as that offside rule[2]. Phew!

This suits Treviso since, despite an annual second from bottom finish, the other Italian team always finishes below them. Treviso also provides most of the players for the Italian national squad in the Six Nations Championship where their main job is to supply everybody else with bonus points[3].

They aren't very good at rugby in Italy. It's felt that can be said because they say the same thing about us and football, probably.

[1] The company has its headquarters here.
[2] Or Only Connect.
[3] This normally doesn't apply to Scotland but they looked a lot better in 2017.

RyanAir™ might think they have duped you into flying into Venice, which is an hour away by bus but you know the situation.

This option's better if you want to see something more than a gondola and, normally, it's just 15 minutes from the centre although that bleary-eyed taxi driver you've arranged for your early morning flight might think that you didn't notice he'd missed the turn-off.

Still, them €euros are no good back home, eh?

Treviso's centre is fairly compact and is rung by a river, roman ruins and a ring road.

To the south and east, the river Sile is claimed to be the longest 'resurgent'[1] river in Europe although the Treviso tourist board really need to drop that one. 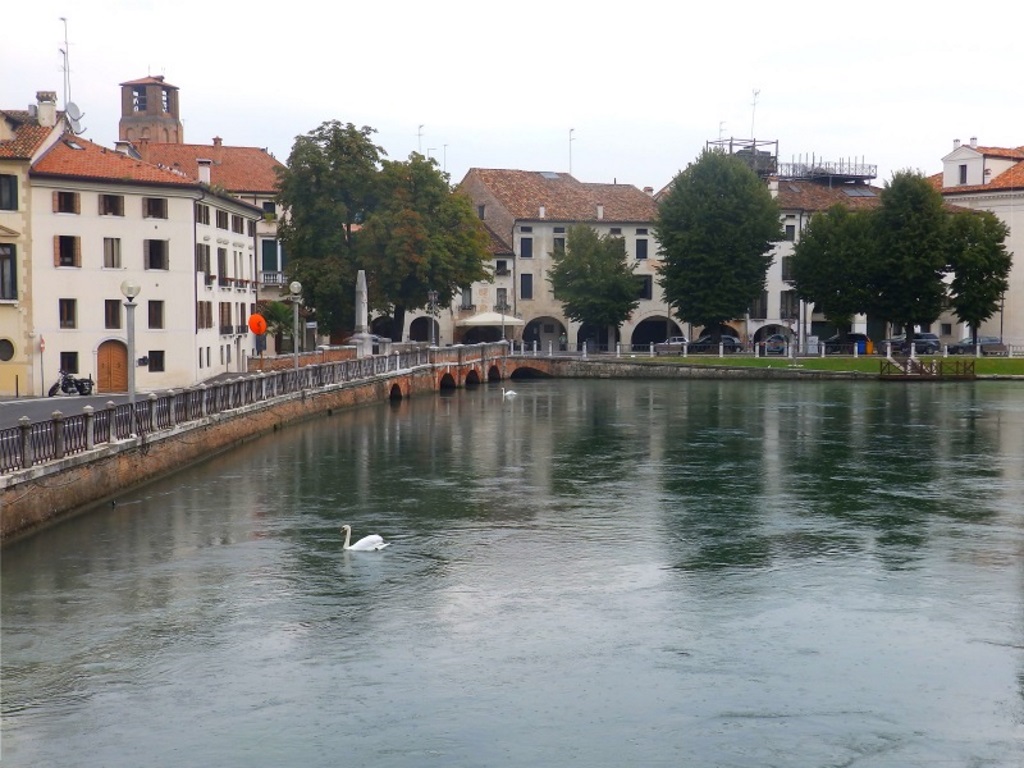 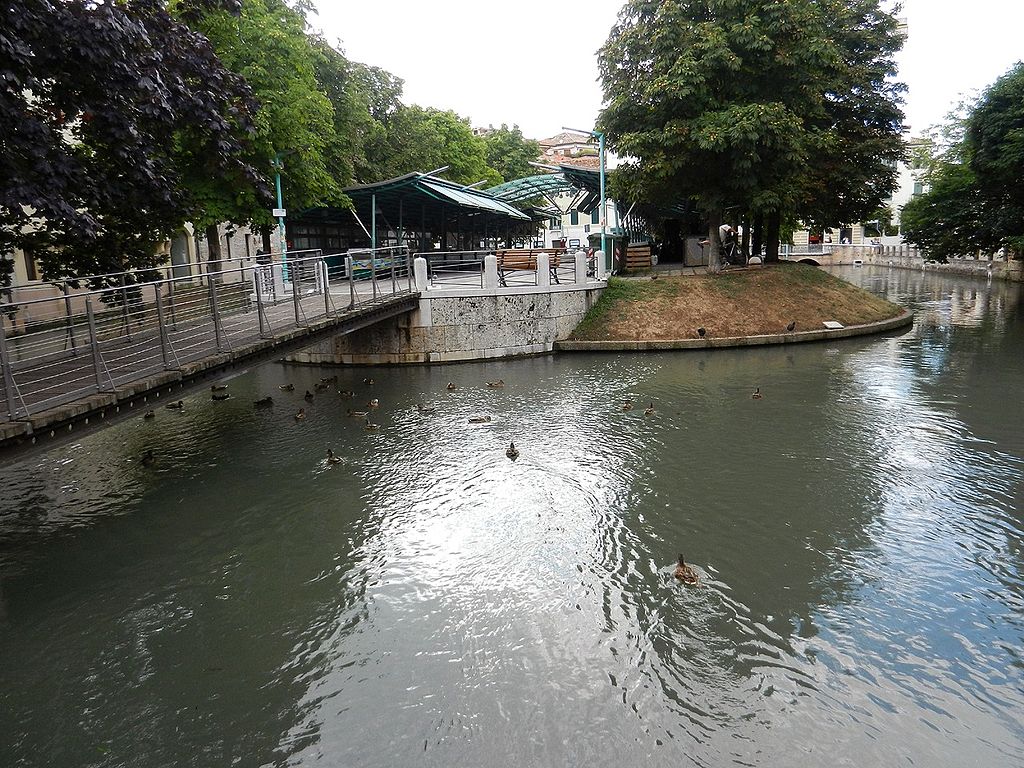 There are far better things to sell here including the three canals that feed the Sile just about here and although it's no Venice, the Cagnan canal, up on the left, has an island with a fish market on it.

There's an English village green feel here and if you squint, the swans could be on a pond in the Cotswolds, somewhere near Gloucester, say? Now there's somewhere where they're reasonably good at rugby.

[1] The source is an underground spring, apparently.

Expectations usually aren't that high in a continental hotel of the same name, see also 'Splendide' and spelling variations thereof. Nearly central location and an ornate, marbled bar means those expectations were unusually surpassed and it's handy for the road to the airport.

To the north, the old, city walls whose foundations are Roman, it's said, and just inside is where the river Botteniga splits to feed those three canals. The other side of the wall? 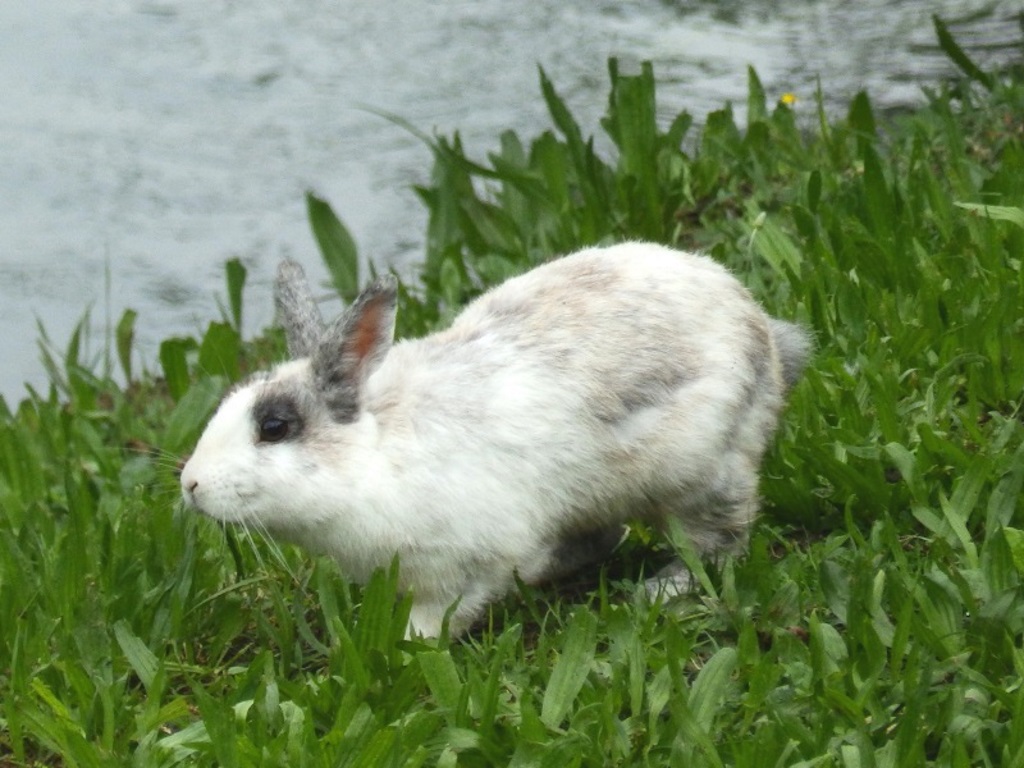 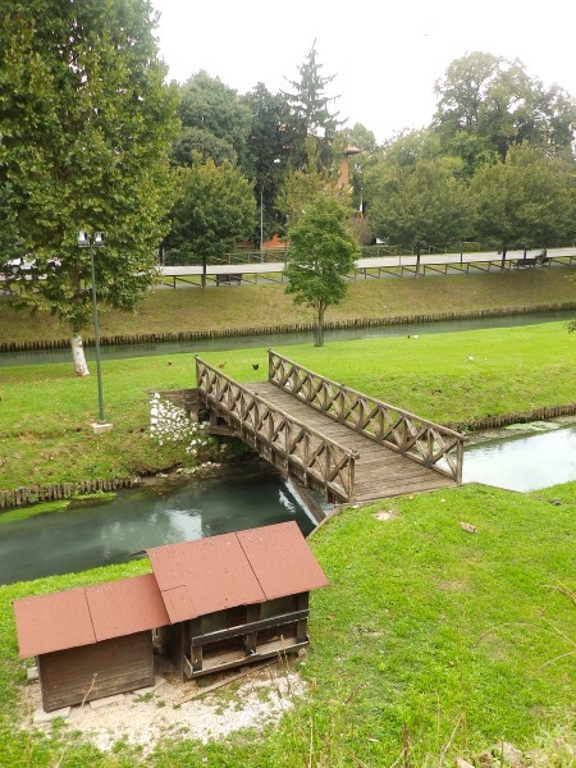 Only a 'wildlife reserve' that's reserved for rabbits with accommodation provided but it's worth knowing that this region supplies 40% of Italy's farmed rabbit meat. Surely not?

A little like the offside rule but a different kind of fowl keep the rabbits company. From a distance, they were first thought to be exotic and from Guinea but nope, they're just skinny chickens and black Livornos[1] depending on who you ask or Google™. 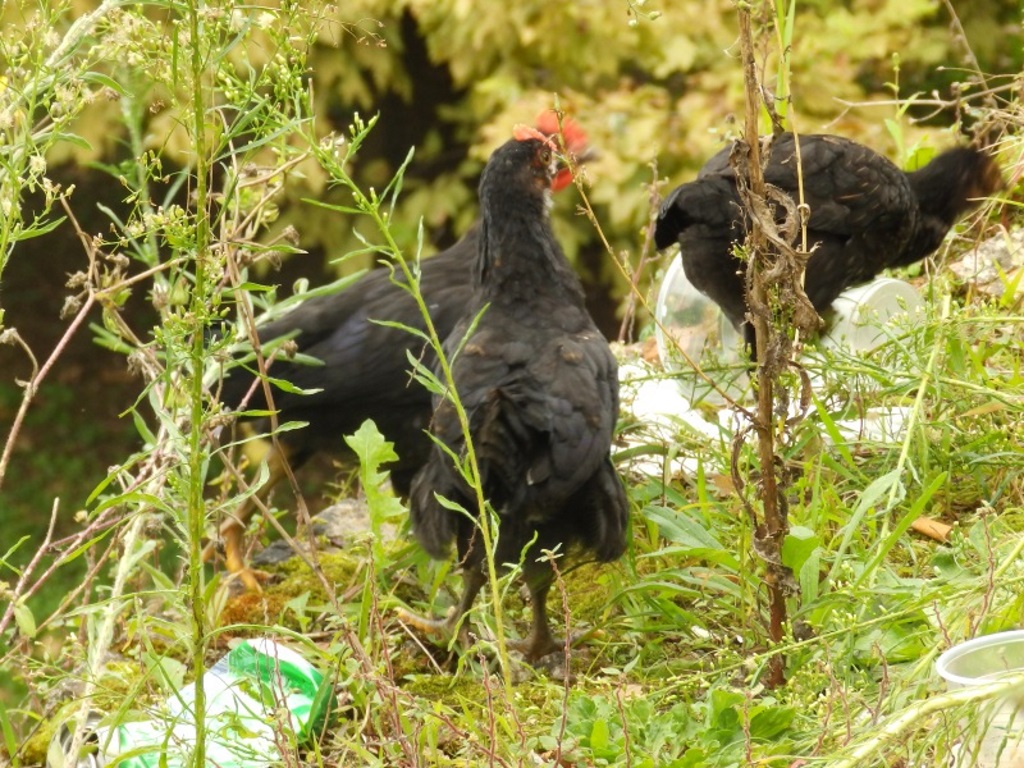 Skinny and jittery actually due, no doubt, to the local boozehounds' habits of lobbing their empties into their enclosure.

Struggling with that phrase book? No need to worry here, the owner speaks... Esperanto! That might be mildly interesting but it's of no practical help so you'll still be pointing and clucking like a chicken when ordering. It's heard that their rabbit's particularly good. Surely not?

Walking west along the wall brings you to a largely residential area with some fancy dwellings. The Via San Nicolò will then lead you back to the city centre via the imposing church of the same name, parts of which date from the 13th century. 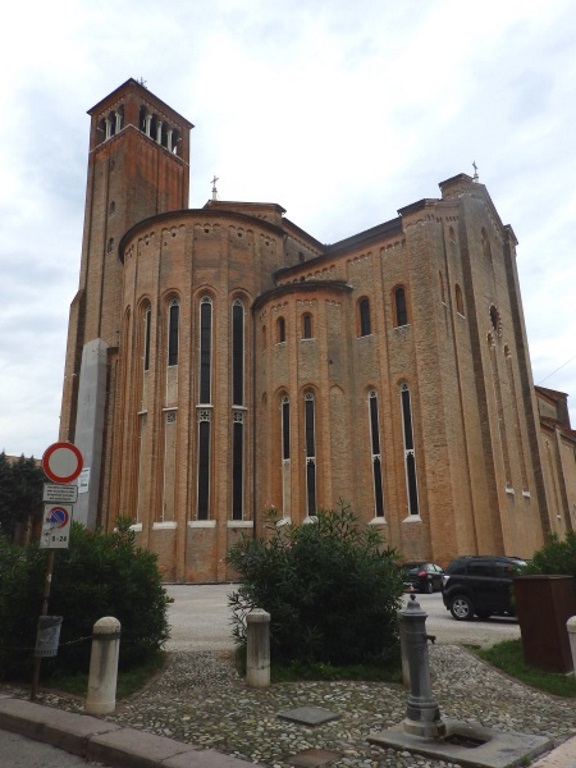 That might have been the second half of the 20th century since this suburb was bombed to near destruction in 1944. There was nothing strategic here except the train station to the south but by this stage of the war, the gloves were off.

The allies' tactics switched from taking the odd bridge out to the 'terror' bombing of towns and cities. The town of Tarvisio, further to the north, was an important link to Austria for the Nazis and there's a theory that this, seemingly unnecessary, pounding was a case of mistaken identity.

A bit like the time when AC Milan signed Luther Blissett from Watford and not John Barnes. Strangely enough, Vicarage Road, home of The Hornets, was also briefly home to Saracens and they're definitely good at rugby.

Back in the centre, everything is concentrated around the Piazza dei Signori and several old palaces. 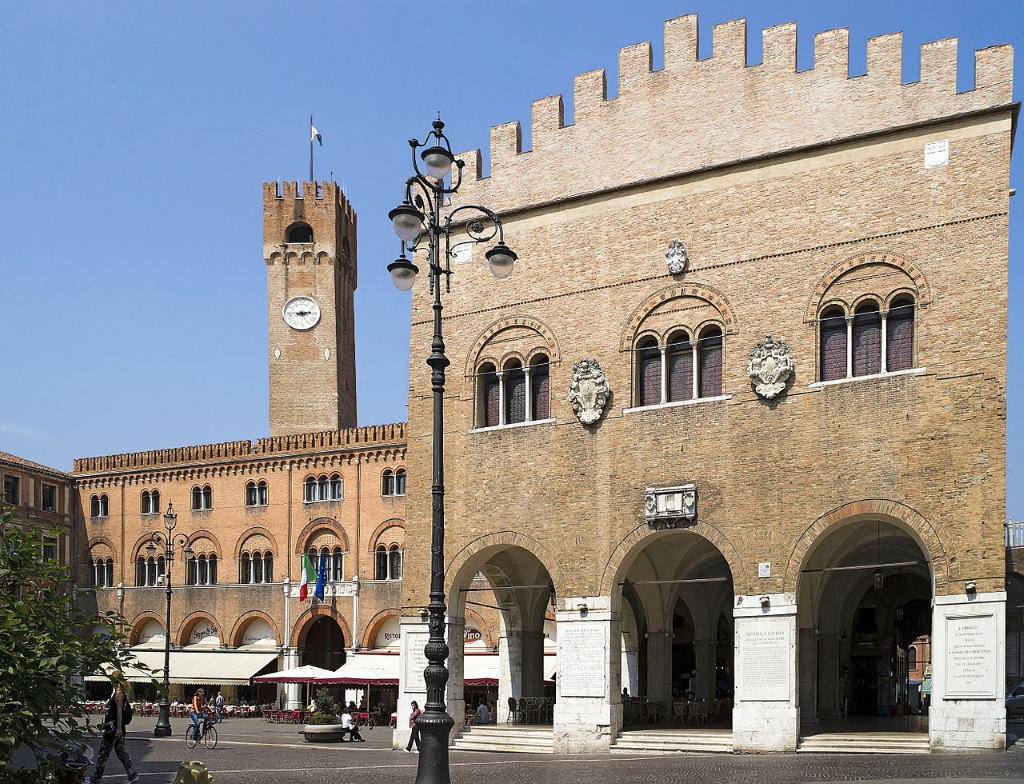 This large, public area provides seating for frequent outdoor events with tonight's being fashion themed and yes, it can be confirmed they are indeed a dandy bunch.

Café\bar full of lunching ladies and smoking teenagers that's under some arches and looks into said piazza. This looks to be the main gathering point during the daytime but you can't get near it if there's a nighttime event on.

Because of the setting up of the seating, you'll settle instead for lunch in the Piazza San Vito, a cosier affair just behind with a café in it. 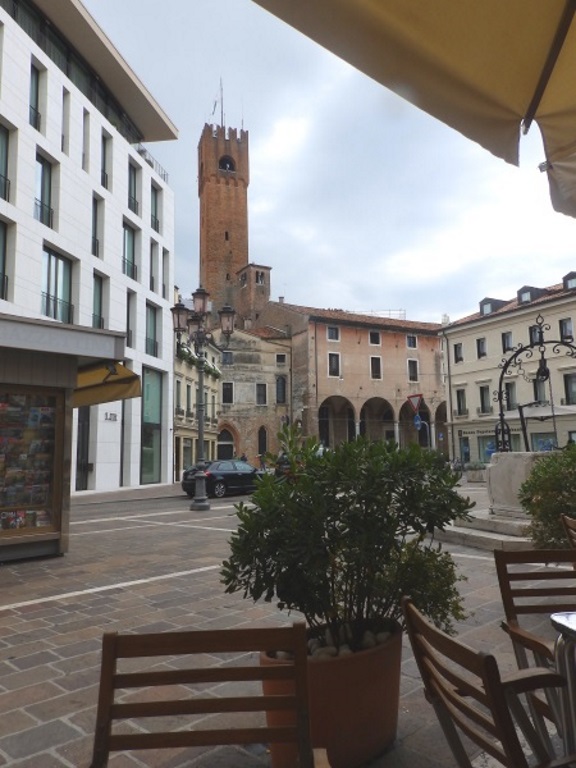 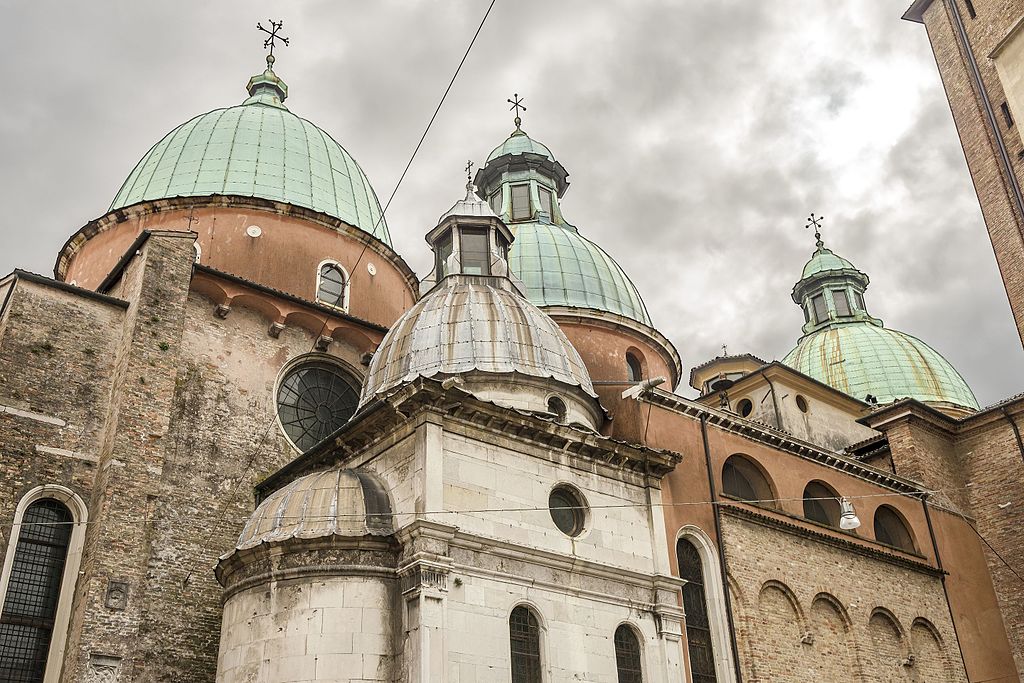 A glimpse there of the Torre Civica and then to its right, the cathedral with its, depending on who you ask, between three and seven domes.

Strangely enough, that's the same number of points that Treviso are expected to pick up in the PRO14 this season.