It's a well-known fact that the Scottish love a statue, they just do, it's a fact. That's SlyBob's casual observation, anyways, and there are more statues per capita in Scotland than there are anywhere else in the world. Apart from the Vatican City, that is, yeah, the Vatican has loads more, probably.

And so it is with Montrose with at least 20 dotted around this small town. Sir Robert 'the Rozza' Peel keeps an orderly eye on the high street on Saturday nights and has absolutely no connection with Montrose whatsoever. 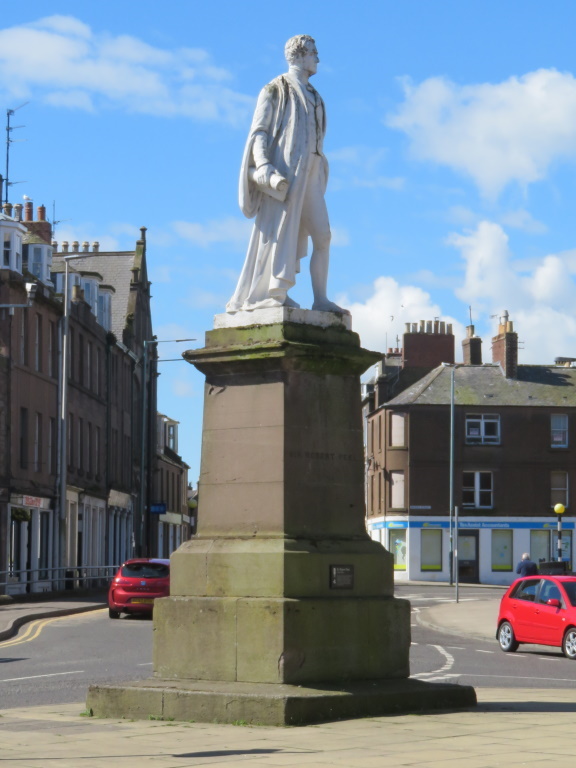 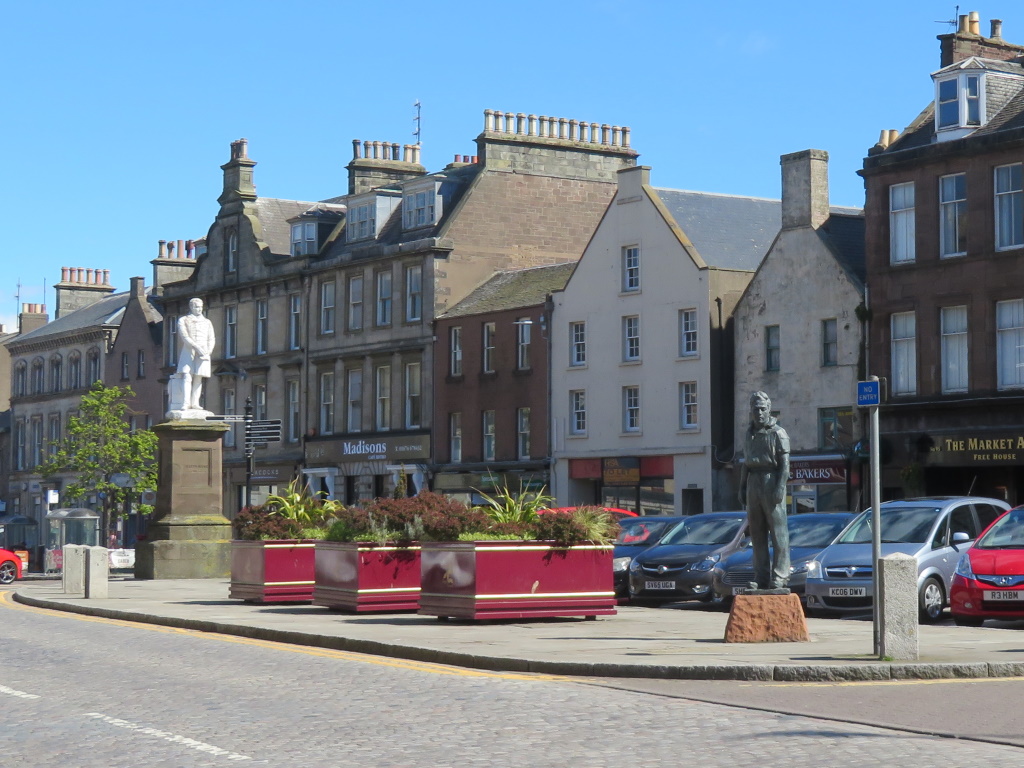 Local surgeon-turned-politician Joseph Hume has pride of place on the high street alongside a more contemporary piece, Bill the Smith, by local sculptor William Lamb. William Lamb? No, we've never heard of him, neither.

That's because outside of academic circles or those with an interest in the statues of Montrose, not many have. He is, however, recognised by those in the know-it-all as one of Scotland's finest ever artists.

Traumatised during World War I, Lamb returned to Montrose and wove the working-class environment into his work, none of that fashionable, modernist nonsense.

Remarkably reluctant to sell his work, Lamb died penniless and reclusive in 1951. His work, however, is still visible, hidden up a backstreet, having bequeathed his studio to Angus Council and is worth the trip to Montrose alone say those in the know-it-all.

The high street is best described as, erm, functional and the neo-Gothic spire of Old & St Andrew's Church just about marks the start, or end, of it. Beyond the church and here's an old friend in Nickel 'n' Dime, an unfathomably named chain of discount homeware stores that can be found anywhere north of Perth.

They've since done up the front but these providers of the low-priced and pliable have already been seen in Arbroath, Blairgowrie, Elgin, Inverness, Nairn and Stonehaven, not that they've become an obsession, but isn't MacPlastic™s much more apt, surely?

This was an Indian restaurant but is now filed in the permanently closed category. It's worthy of a mention, perhaps, because this was the best since Totnes and SlyBob provided them with 70% of their takings during a three-night stay.

The owner had relocated from Aberdeen for the cheaper rents and if anybody knows if and where he has hopefully reopened, that's next year's summer holiday sorted, thanks.

There's something rather more eye-catching east of the main drag at the Mid Links, a sequence of small, public play areas and parks. The railings line the marvellously named Provost Scott's Road, whoever Scott was and whatever a provost is? Robert 'the Rabster' Burns makes an inevitable appearance, despite hailing from the other side of the country, and it is all, quite frankly, surprisingly splendid.

No, not the inside of Old & St Andrew's Church but from the top of the staircase of these decidedly good, value-for-money lodgings. The lady on reception is delighted that Angus has two new fans but can't quite bring herself to recommend Arbroath. There really is some quite fierce rivalry around here.

The south part of town is largely out of bounds thanks to some heavy industry that's still hanging around.

Above that, though, evidence of some early wealth in the fine form of Montrose Academy and, just about opposite, the original town museum. 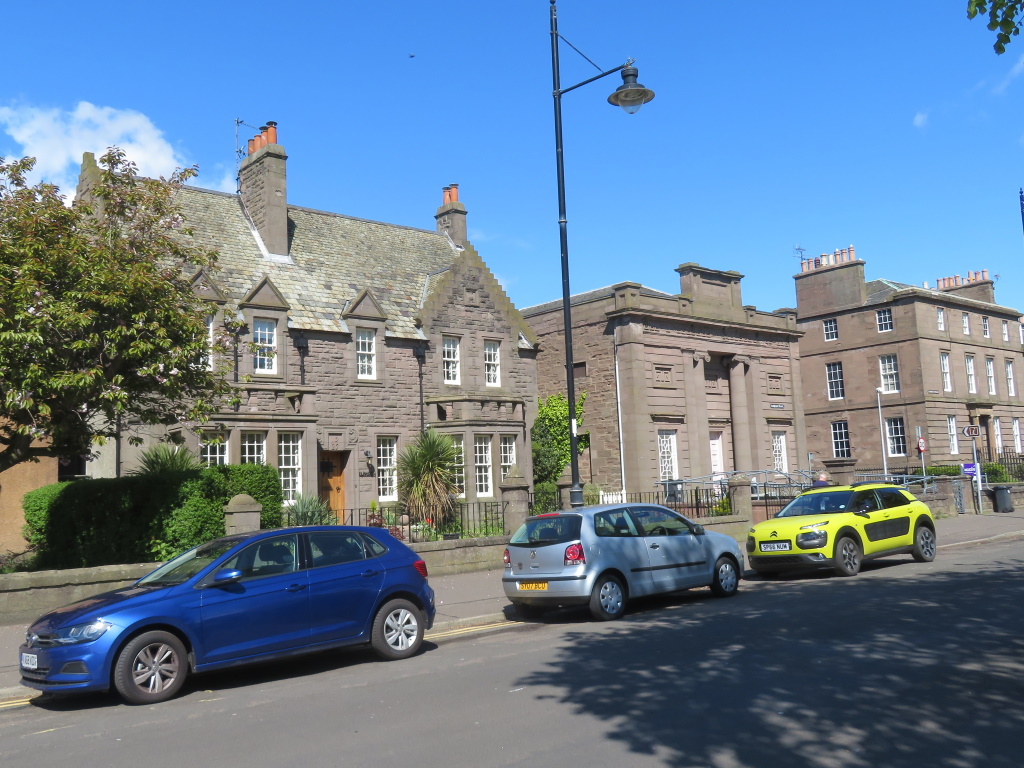 Purpose-built in 1842, the museum that is, it houses all manner of artefacts[1] with an adjoining art gallery catering to the contemporary. The former grammar school is slightly older but only the front remains and the adjoining extension now caters to the comprehensive.

Following a stint as an army barracks, Scotland's first lunatic asylum, no less, has now been repurposed for the residential, nearly. Hey, what else are you going to do with a bit of a gap and a spare photograph?

Overlooking the River South Esk, it's another piece of William Lamb's work and the solitary figure, not shown, stares seaward in recognition of the working men of Montrose.

Bamse, on the other paw and not shown, neither, has his head cocked towards town and this loyal St Bernard is a national figure in his native Norway. The mascot of the Free Norwegian Forces during World War II, you see, died on the dockside after his captain ended up moored in Montrose.

As has already been said, they love a statue here.

Numerous Premiership™ pundits have said over the years re Messrs Ronaldo, Viera et al. 'He's got all the tricks all right but would he fancy it on a cold and wet Wednesday night in Grimsby with the wind whipping in off the North Sea.', probably.

A row 'Z' special with a fair wind might require the services of a seal to retrieve it since Montrose F.C.'s ground isn't too far from the saltwater. It's also right on the Mid Links and every fortnight an average of 664 spectators access via here. 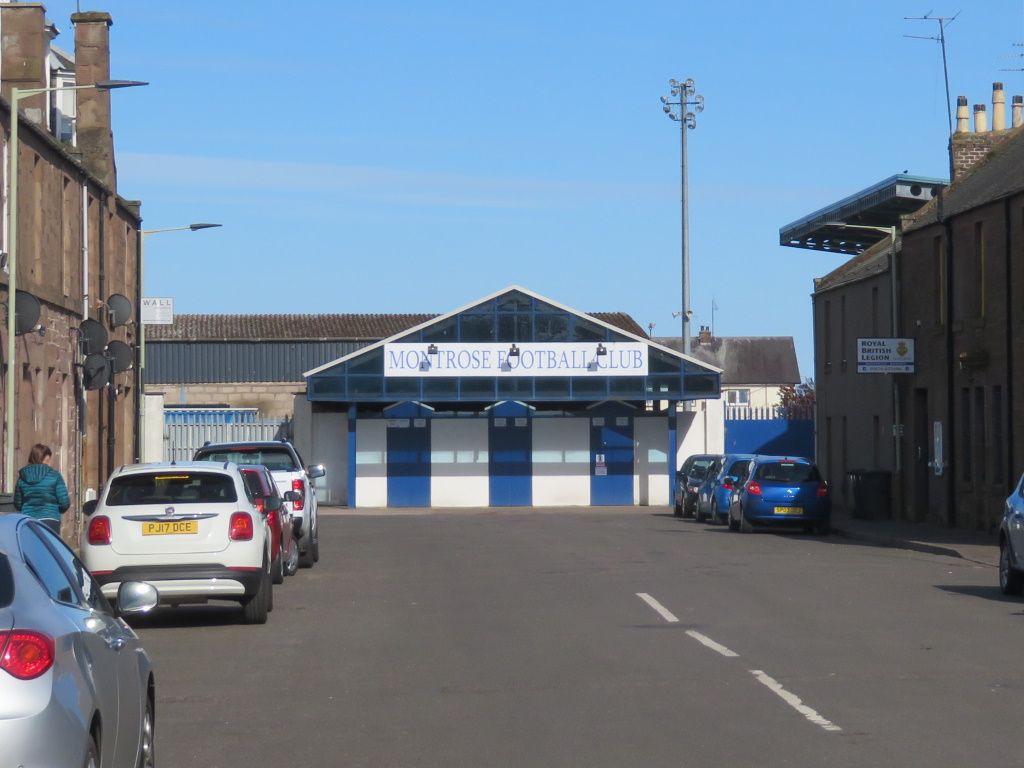 Unless their great rivals Arbroath are in town when things are a lot livelier, they say, although they're currently divided by a division and Montrose's best bet is currently a good cup run.

A slightly derogatory term for having built their houses facing the wrang way that's really down to a lack of adequate plots back in the day.

Follow that flying football over the playing field to land at Montrose Beach where there's some good work being done, golden sands-wise. 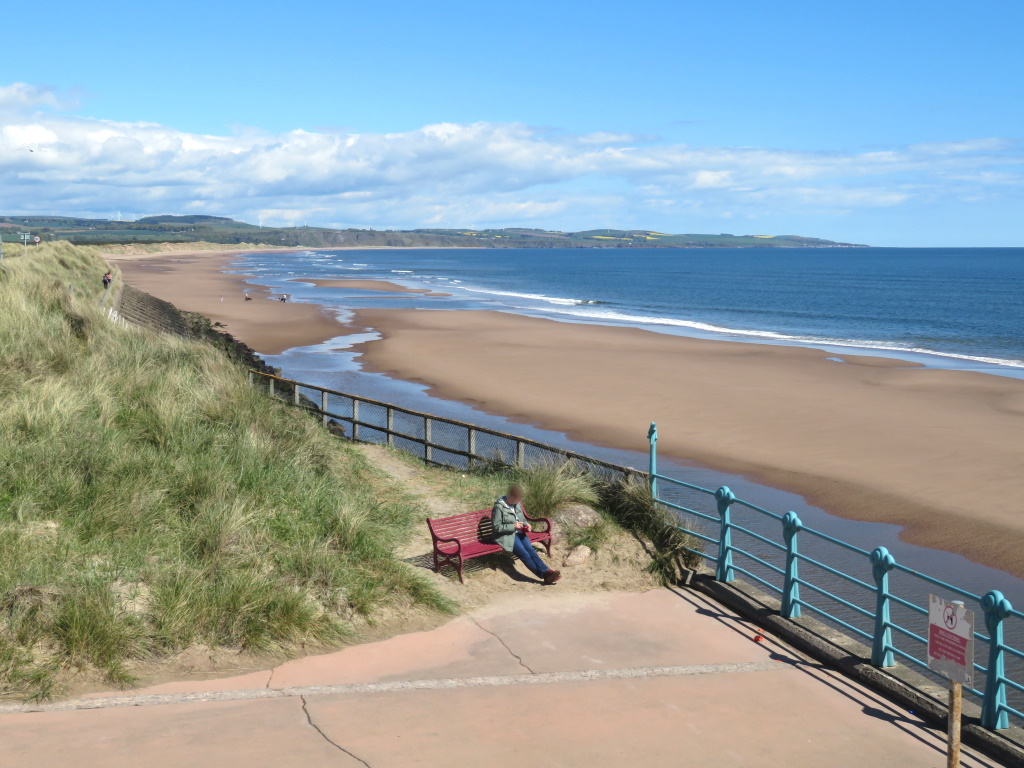 They've been flocking here since at least 1913 seeking respite from the rain in the Traill Pavilion, named after a pair of benevolent brothers who paid to pretty up the front.

There's more of William Lamb's work here, he really does get everywhere, and the clue here is he's looking down and not out. The Minesweeper would have been a local chap whose job was just that, patrolling the dunes for anything wayward washed up after a World War I storm.

For a full afternoon out, you too can follow the dunes north to an old viaduct then return via some woods. Getting to the Montrose Air Station Heritage Centre from here, however, looks to involve crossing a golf course making a good walk spoiled for all concerned.

There is another Montrose-first claim, the first operational military airfield in the UK, no less. That was the same year the pavilion went up and the practice was invaluable for what went off 12 months later, probably.

A more-than-serviceable beach, then, some obscure Scottish artistry and an excellent, if now defunct, Indian restaurant but they're not the real reasons to be here, right?

The Montrose Basin is the main attraction and what's that you ask? The Montrose Basin? Until a month earlier SlyBob had never heard of it, neither, but plenty of others have and they'll be largely twitching types.

Formed following a tidal wave 8,000 years ago, they say, this almost-perfectly circular, tidal lagoon has 750 hectares[1] for those fond of a binocular. There's just one problem. You don't appear to be able to get anywhere near it!

Most of it is hidden behind hedges and the best view seems to be from the footbridge above the Dundee-Aberdeen railway line. Not unless, that is, you part with a few, small pounds at the Scottish Wildlife Trust™-run visitor centre whose short trails and hides will get you as close as you're likely to get.

There are ospreys, when in season, and a golden eagle who lives in Dundee, the man says, but even they can't scare off the 80,000 migratory birds in autumn.

[1] Nearly 900 football pitches with room for throw-ins and corners.

It does, however, come with a downside and when the tide's oot, it's said to not half stink a bit.

Here's the Basin, there's Montrose
Shut your een and haud your nose.

Not that a single whiff of it was got on this visit, more like...

Shut your een and haud your nose
Another statue? Must be Montrose.

All translations were kindly provided  here.