Eyemouth is where the mouth of the Éa meets the North Sea but what's that you ask? Isn't Éa from the Old English for 'river' making for another River Avon situation? It certainly is and certainly does but here is something of a rarity along this stretch of Scottish coastline.

The natural bay does its best to protect from the often choppy North Sea but the East Coast Concrete Co Ltd™ have received several calls over the years. 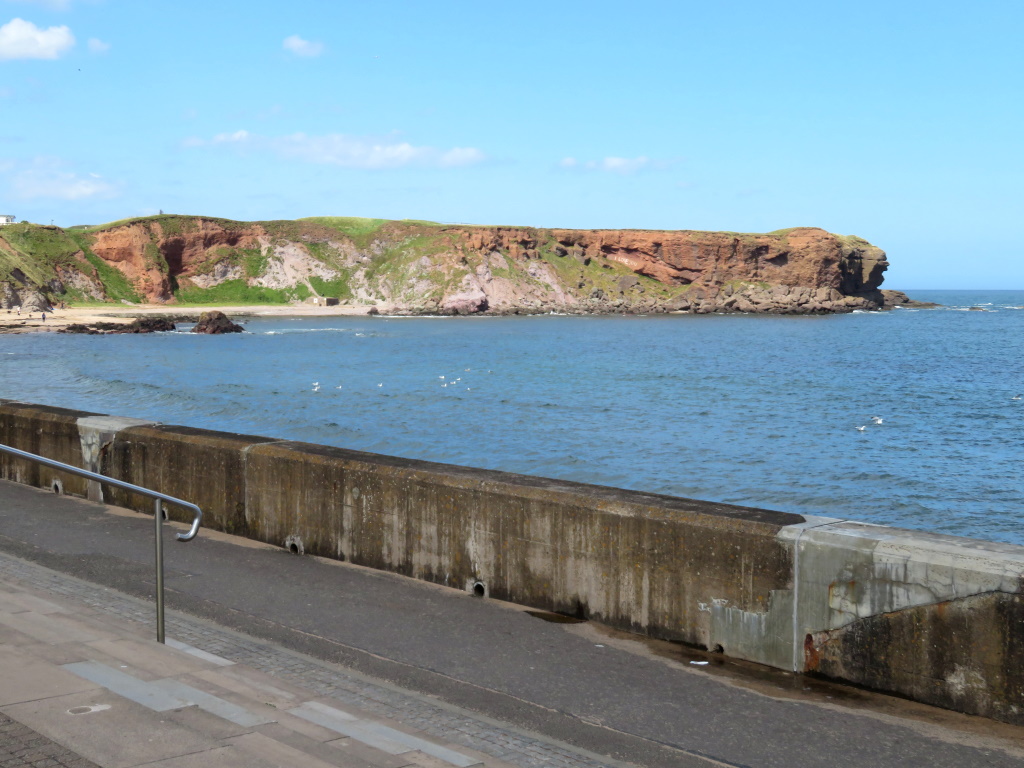 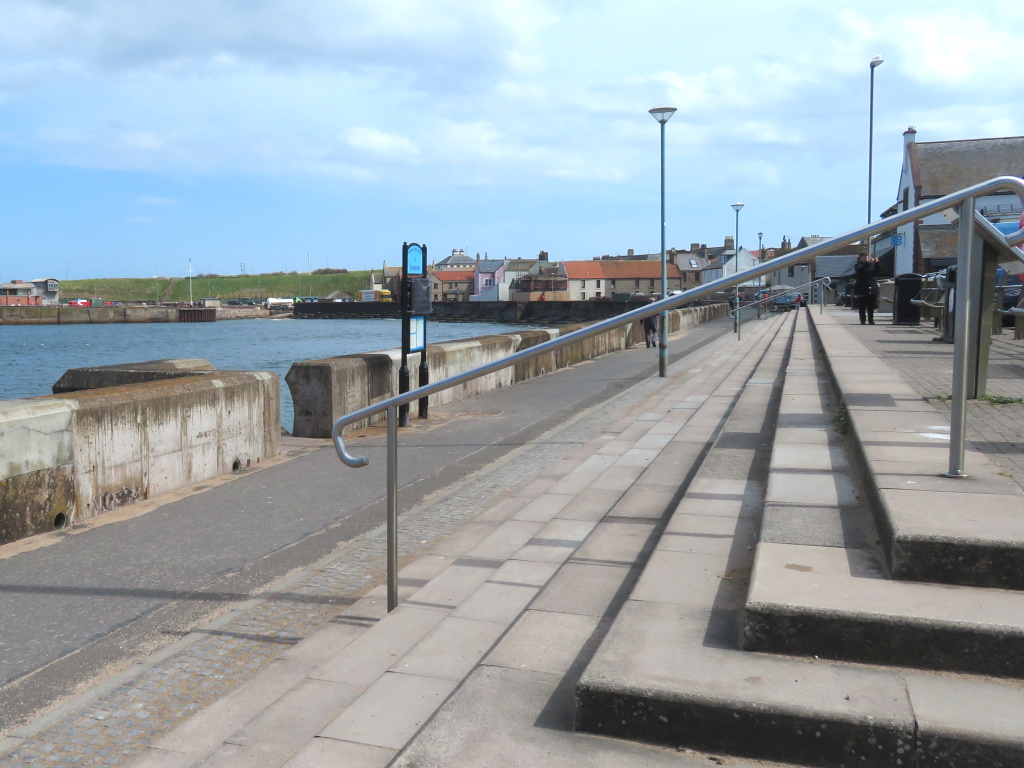 As has Edinburgh-based sculptor Jill Watson, no doubt, commissioned to commemorate the victims and families of a particularly ferocious storm in 1881. 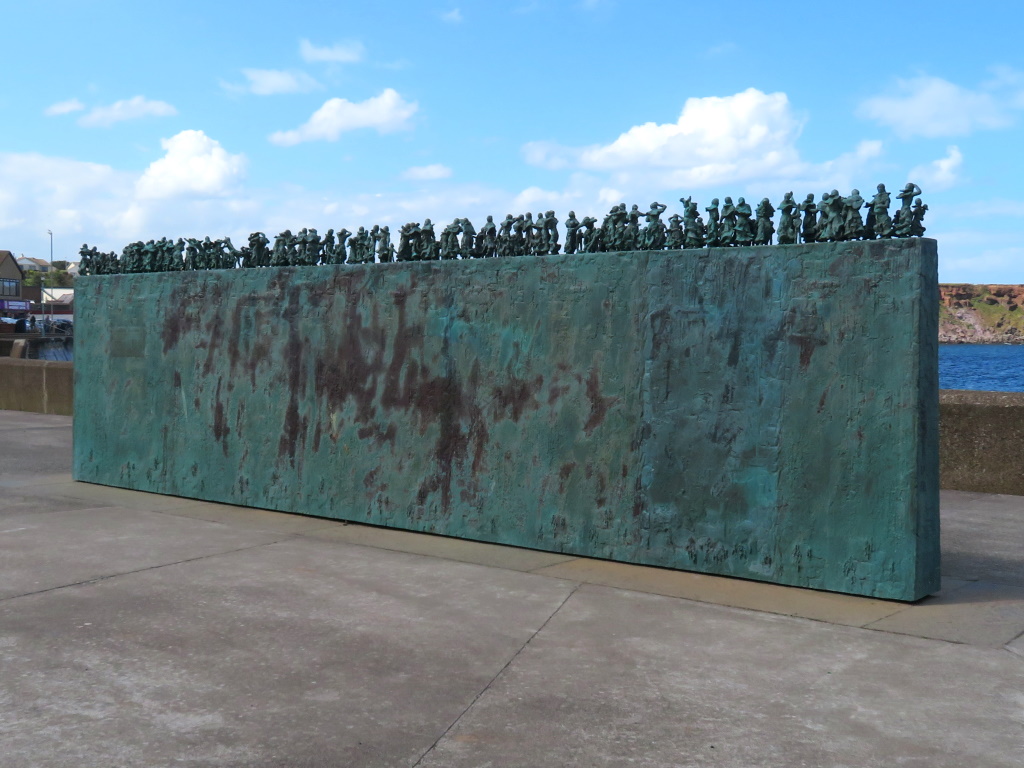 Still known locally as 'Black Friday', 189 mostly Eyemouth men, yes 189, drowned in full view of the Widows and Bairns who watched helplessly, and increasingly hopelessly, from the shore.

Each figure represented was real and while the usual cause is a north-easterly squal, this here delivers a visceral chill. There's a smaller version nearby in St Abbs where far fewer casualties still contributed to the 189, yes 189!

Here houses a still-working harbour with more than a whiff of the workaday. Day-trippers and thrill-seekers fuel a handful of fleshpots[1] before feeding the seals or travelling too fast on a RIB, respectively. 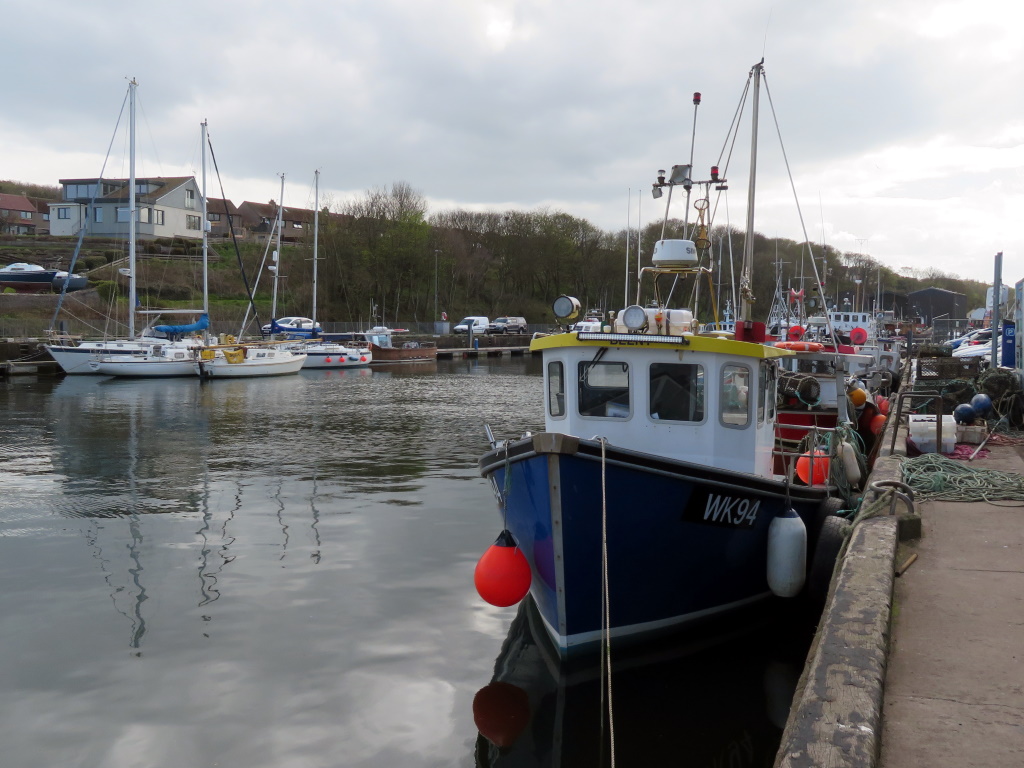 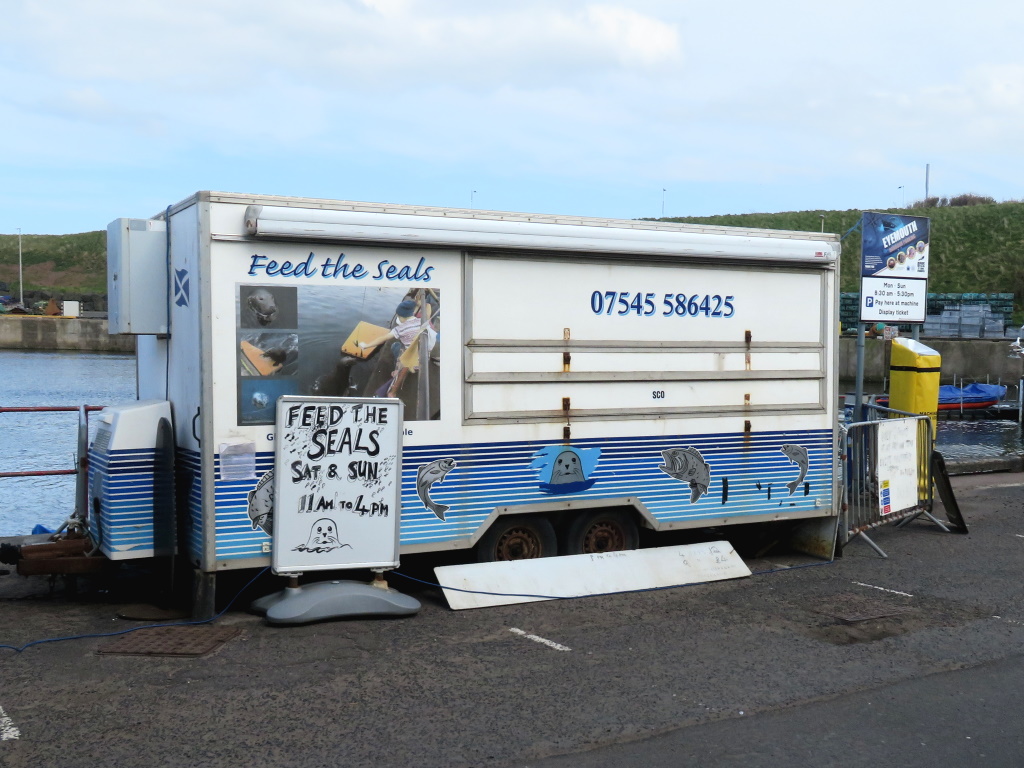 It's a short hop over to a headland for a close-up with those cliffs, they say, although a golf course looks to spoil that walk for all. Gunsgreen House and Nisbet's Tower hint at some history but, here's the thing, Eyemouth ain't actually all that old. 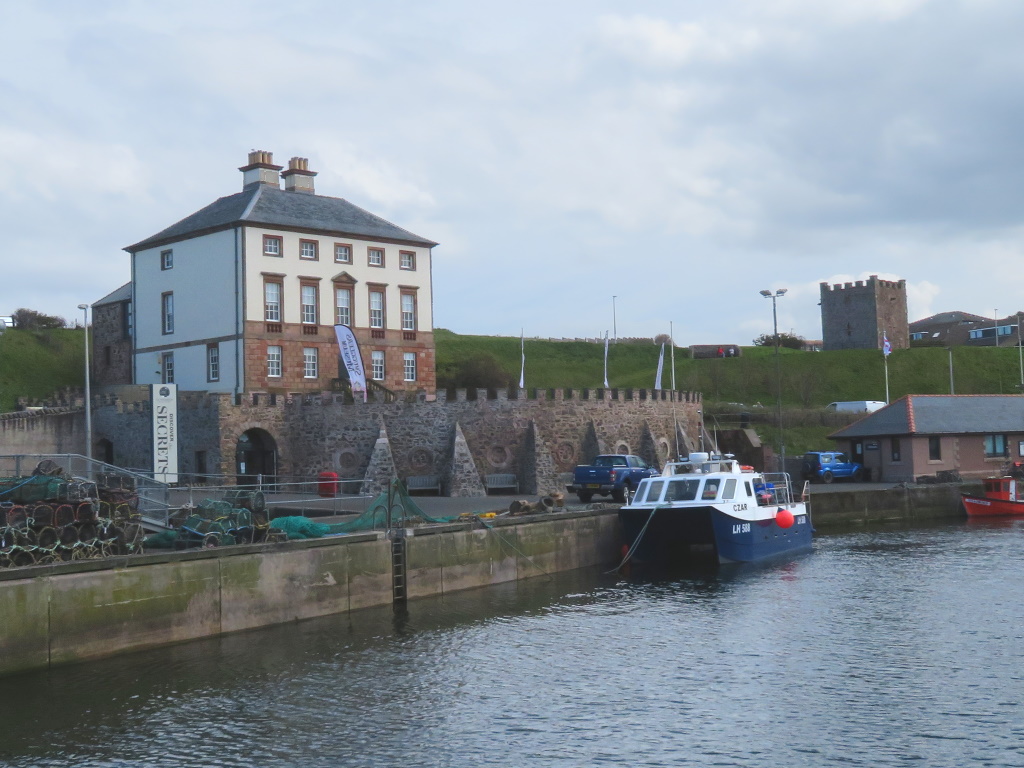 There might have been some 12th-century monks clinging to the outcrops but it wasn't until the technology of the time made the harbour navigable was there what could confidently be called a town.

Gunsgreen's Georgian windows are a clue and the town museum can fill you in further on all of that, and more, when in season.

Away from the harbour and the bay, there's evidence of the Victorians who came with the railway. 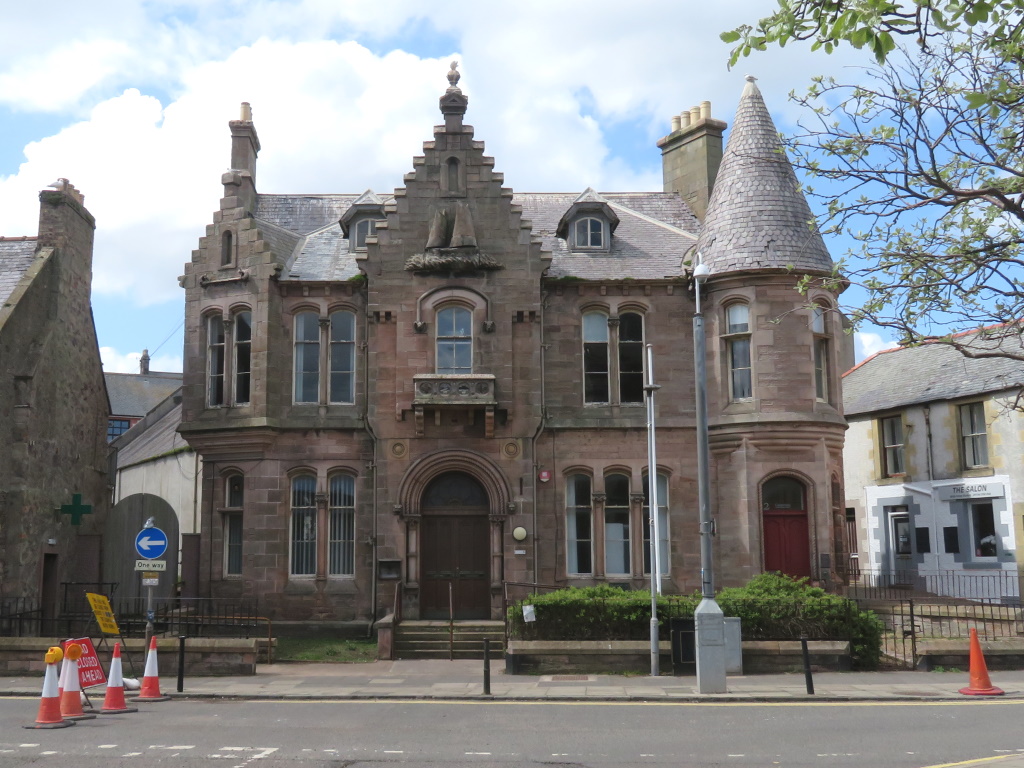 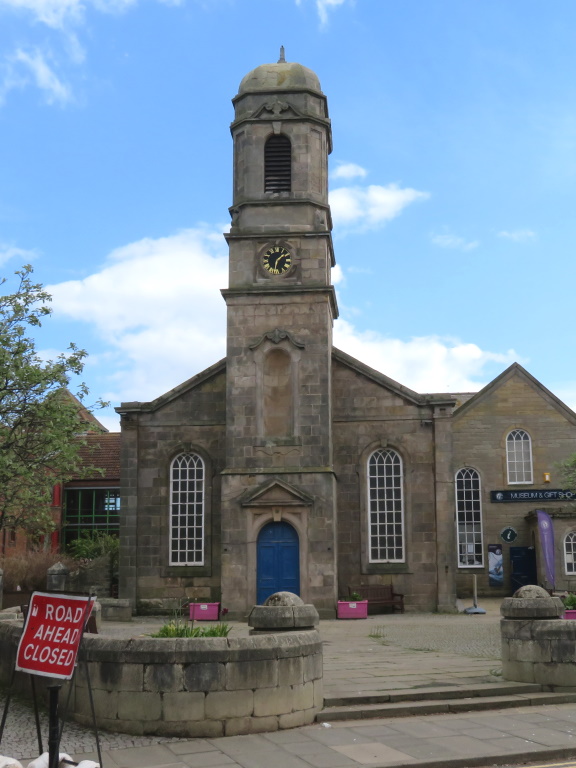 There are just a couple of streets here to explore, really, including the aforementioned museum, because, get this, downtown Eyemouth ain't actually all that big.

This was, however, once home to, and still is, sort of, Willie Spears. Willie who? You might want to pull up a chair...

He was only Eyemouth's version of another Willie, Willie Wallace, but it was the Scottish Church that oor Willie took on back in the mid-19th century. Their taking of a teind, one-tenth of all fishermens' income, was still employed in Eyemouth despite the rest of Scotland largely axeing this archaic taxation.

A greedy, local reverend, however, had read the small print and applied the legal entitlement for an annual added value to his god-bothering brand of an estimated, and not inconsiderable, £4,000. In return, no duties were due from the village to the harbour authorities but that meant no income for improvements and Eyemouth's men earned a reputation for working in far riskier and more dangerous conditions.

The not-so-god-fearing Spears was having none of this and following a riot, imprisonment and the rescinding of the teind, the capitulation of the church was complete with Spears stood atop the cliffs, kilt aloft, screaming...

Ray Winston would be perfect but he's never been able to do a Scottish accent, probably, so Martin Compston in menacing mode it is with Winslet playing his dour but dutiful wife now it's known that  role is in her portfolio.

It's a mystery, then, why Netflix™ aren't returning any calls, they'll make anything these days? Perhaps it's because this romanticised version isn't quite how it happened?

Spears was imprisoned, alright, but only after handing himself in, more concerned with public safety than his own. His leading of a peaceful protest had turned unexpectedly violent, you see, and the church did indeed abolish the teind but not for nearly another 20 years, technically speaking.

An agreement was made of a one-off payment of £2,000, the necessary loan conveniently arranged by the church and purely in their interest, terms and conditions. During this time, the state stayed well clear of this kerfuffle and, unlike everywhere else north of and including Dunbar, no grants were given and the harbour's health & safety rating remained at 'advisory'.

Not until the debt was fully paid were funds and plans provided but this was now August 1881 and it's now known what happened two months later. The delayed dredging and widening might well have created a haven and saved many lives that night but watching from the shore, a now-retired and traumatised Willie Spears. 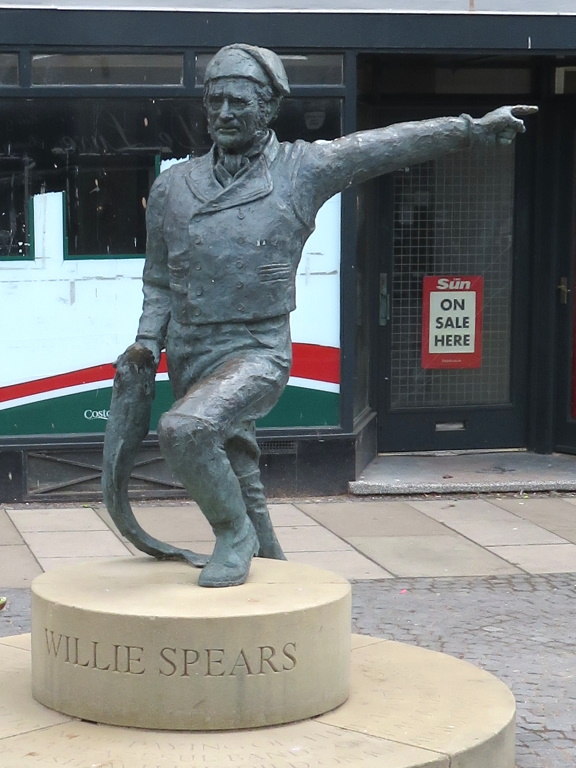 That's not nearly as romantic a tale with alcohol and poverty featuring in Willie's final few years. He is, however, rightly remembered here, right in front of the local tandoori, right comrades!

That's SlyBob's interpretation of events, anyway, but more detailed work can be found elsewhere. Researching his family tree, reporter-turned-author David Aitchison discovered his great-great-great-grandfather James Lough drowned in the 1881 disaster, the tale already familiar to him as a boy brought up in Eyemouth.

It was only after digging deeper, however, did he find that his great-great-great-great-uncle was none other than, well, Willie Spears, obviously. More deeper digging revealed Willie had been erased from the history books but he's been rewritten in Children of the Sea: The Story of the People of Eyemouth and Willie's involvement in what was, quite frankly, a scandal.

This dedication ultimately led to the unveiling of Willie's bronze replica by David and his young, fittingly middle-named son Spears, nice. Not having read Children of the Sea, but reading between the lines, it's fair to say that David isn't a regular churchgoer.

Phew! That's quite some story and Willie lived just to the right of the, yet to be erected, war memorial. 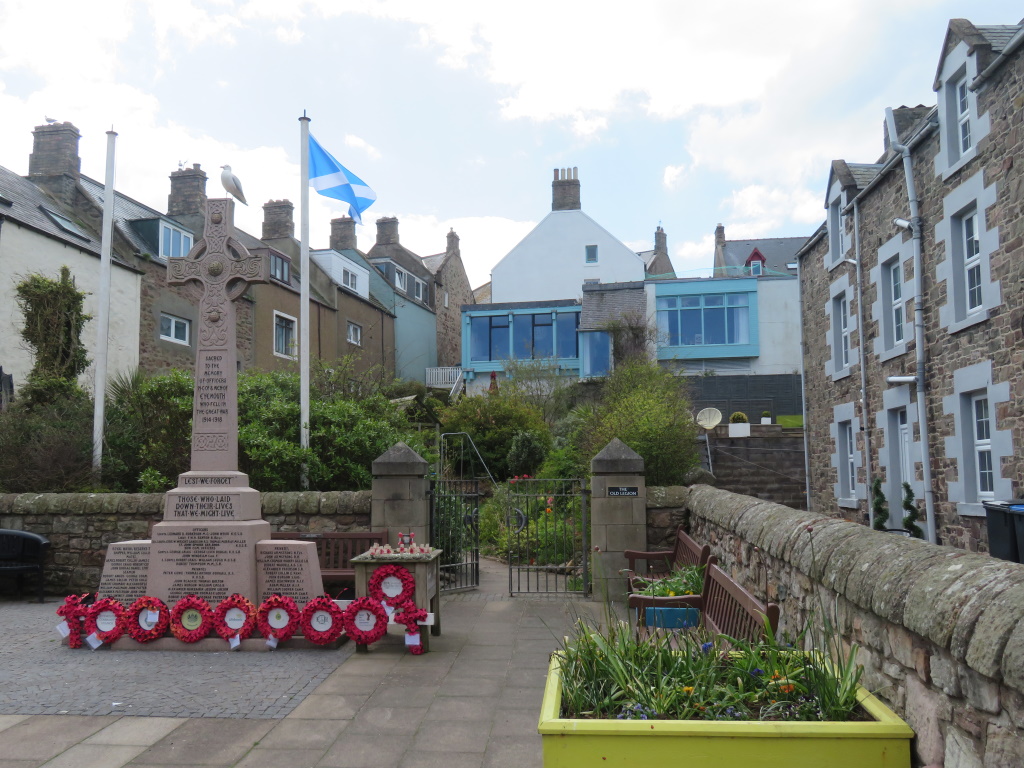 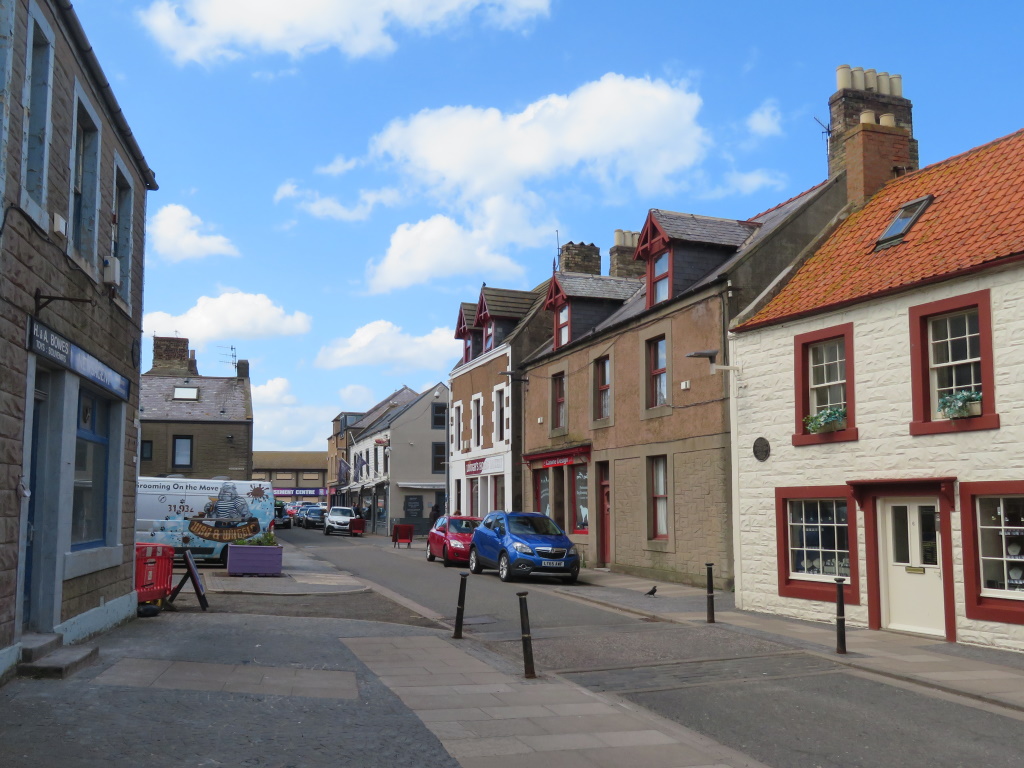 Just behind, the Lough's run the excellent local bakery on the high street, with all manner of savoury and sweet and all done with a 6 AM start.

That's an option if it's too early for the tandoori or too late for fish and chips so as not to spoil your teas but an empty table has just been spotted outside of The Tavern.

It's a sizeable operation inside and looks like they can accommodate most of the caravanners up the hill but they'll do a pair of sandwiches with a word of warning on the wildlife.

The gulls, however, are nowhere to be seen because there's a raven here, not shown, who failed the audition for  The Omen for being too intimidating. He's stalking for leftovers although he's not too bothered about the untouched side salads that nobody really wants, neither.

Hopping onto a table, it's a little disappointing to see he's not fashioned a pulley system from a discarded ring pull and some fisherman's twine to nick Bob's chips, they're supposed to be quite clever, aren't they?

As for the gulls, they're not too far off and returning to the car conveniently parked outside of the Co-op™, here's the evidence. 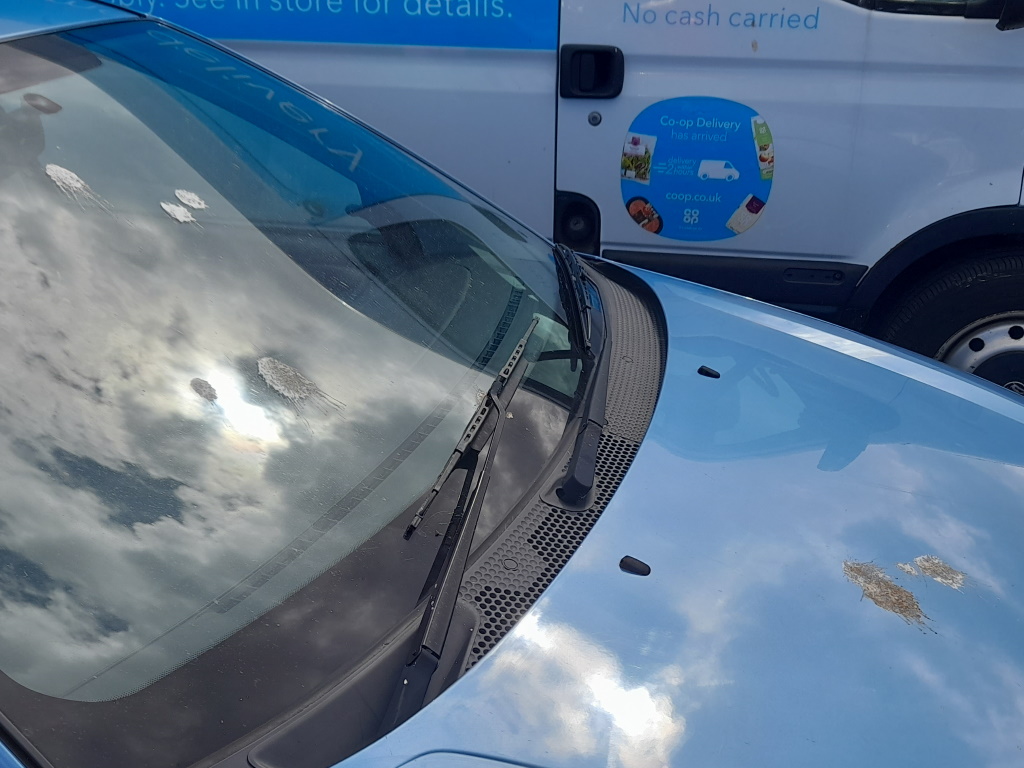 It's not so much the chips that are the problem, it's what happens to the chips 10 minutes later. It's thought you know what's being said here... SPLAT!