Can you believe SlyBob's never clocked eyes on Kelso? Every other large village or town in the Scottish Borders, yes, where there's usually something to write home about, but never Kelso, no.

It's heard to be the jewel in the just-over-the-border's crown but Melrose might be hard to match, this said from an increasingly unreliable memory bank.

"... the most beautiful if not the most romantic village in Scotland" said Sir Walter Scott of Kelso even if he did school here and was generally inclined to the reverie. 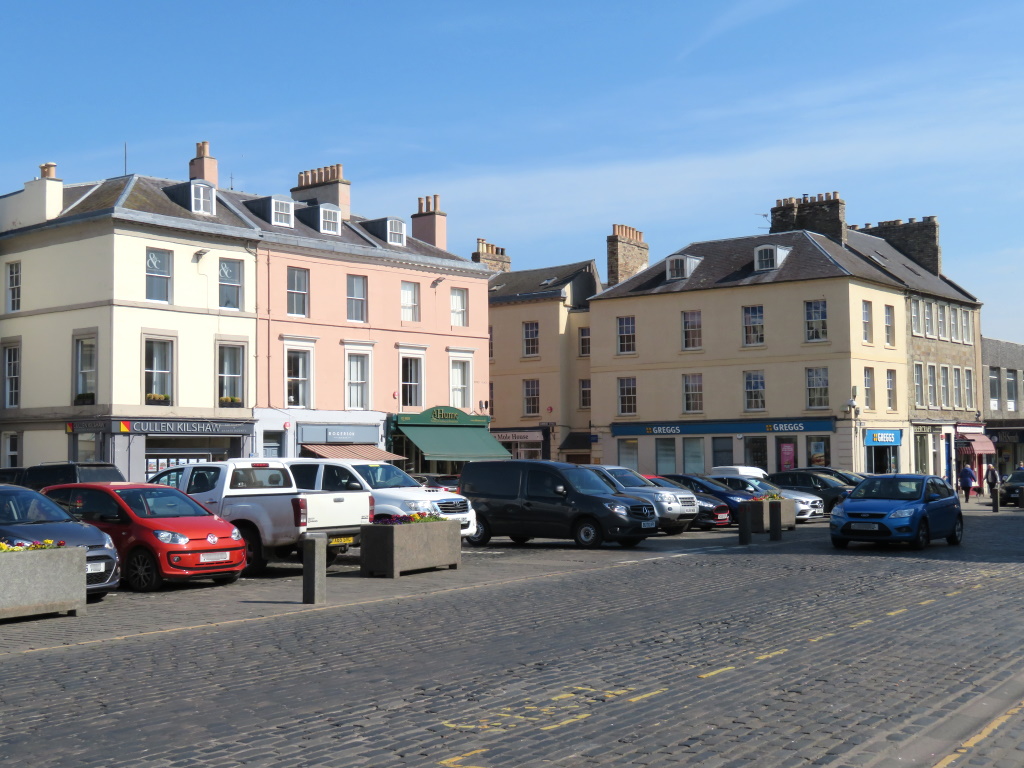 That has set the imagination in motion but having finally managed to arrive, Kelso simply doesn't look how it should and that's not in a bad way, by the way.

Hidden just behind there is the Cobbles gastropub, crafty brews and the whiff of BBQ complete with Courier font. Their gelato is of the artisan variety from a shop that's part of the same family operation and all with lineage back to Florence.

I Ciottoli, however, doesn't sound quite so exotic in the Scots vernacular.

Towns in these parts tend to be a single-road-through setup with a river if you're lucky but more on that in a minute.

Kelso, however, has long since been bypassed but the centre is dominated by a grand Georgian square and with four ways in and out and two bridges, no less, it's as navigationally challenging as most major urban areas[1]. 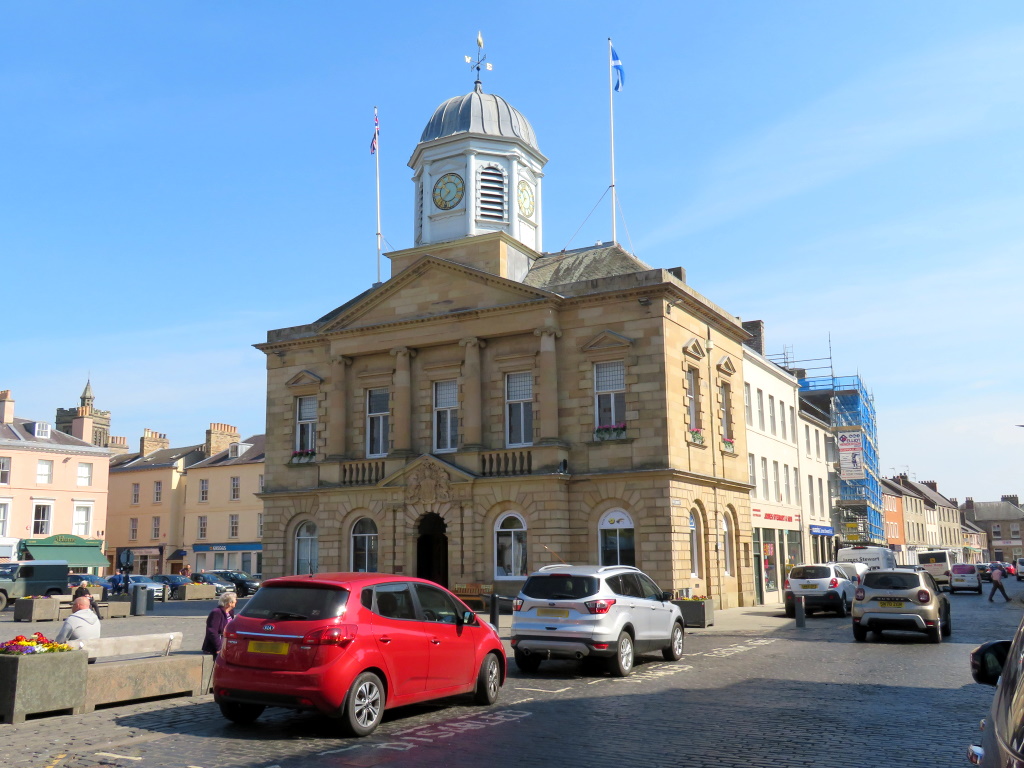 The former town hall dominates, now part-occupied by the River Tweed Salmon Fishing Museum that even at 100 miles long makes for a rather niche attraction, nice.

The building splits Horsemarket and Woodmarket, one way in and the other one out, and is an indicator of what once went on here on market day.

Whatever one sold wooden horses isn't known but what with Mill Wynd, this made for an industrious place by the mid 1700s although its roots are much older.

Here used to be run by the family now behind the Cobbles but the family-run feel remains at the friendly reception. 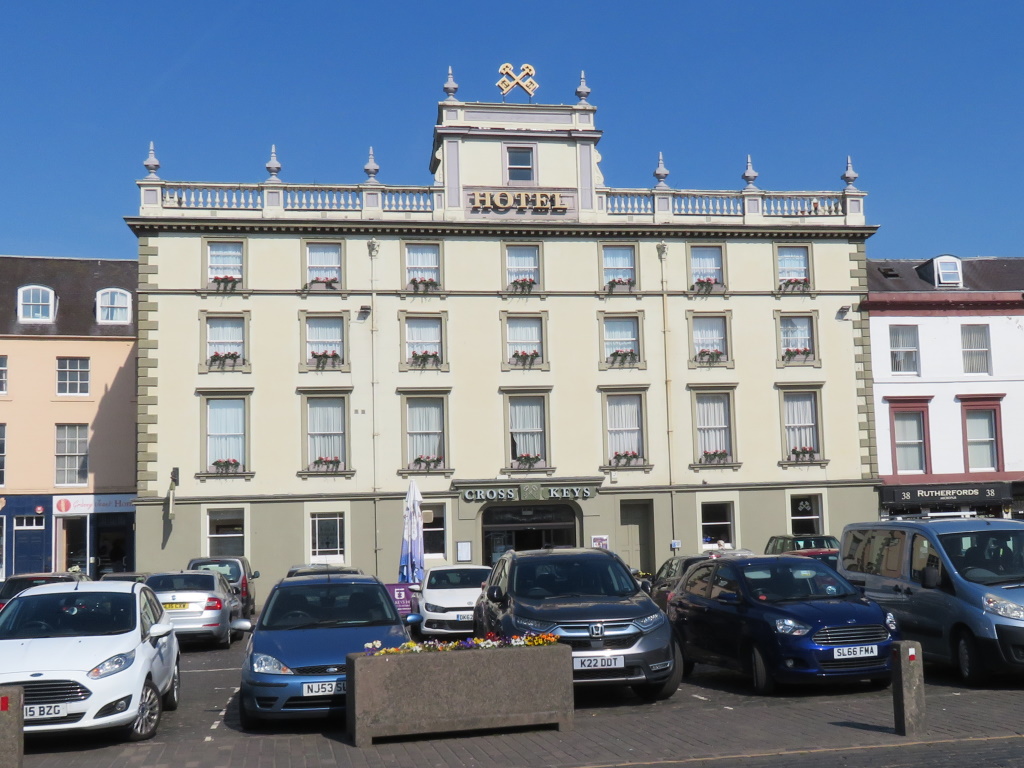 That includes diplomatically acknowledging the 9:40 AM breakfast request, despite their 9:45 cut off, and a tip that Sultans of Kelso is BYOB but the Co-op™ can handily be found just further up Roxburgh Street.

As for Sultans, they might not even have a reservation system so there's a 15-minute wait for a table despite having done so. Still, that means the poppadoms are free and the bitter notes of the Co-op™'s Joker IPA cut through the slightly sweeter tones of the Scottish curry, cracking.

They're well served with abbeys in the Borders with a right pair of whoppers at Melrose and Jedburgh and don't forget Dryburgh.

What's left of Kelso's isn't quite on the same scale but they're all down to David I of Scotland, a progressive, yet god-fearing, 12th-century king and soon-to-be saint, miracle unknown. 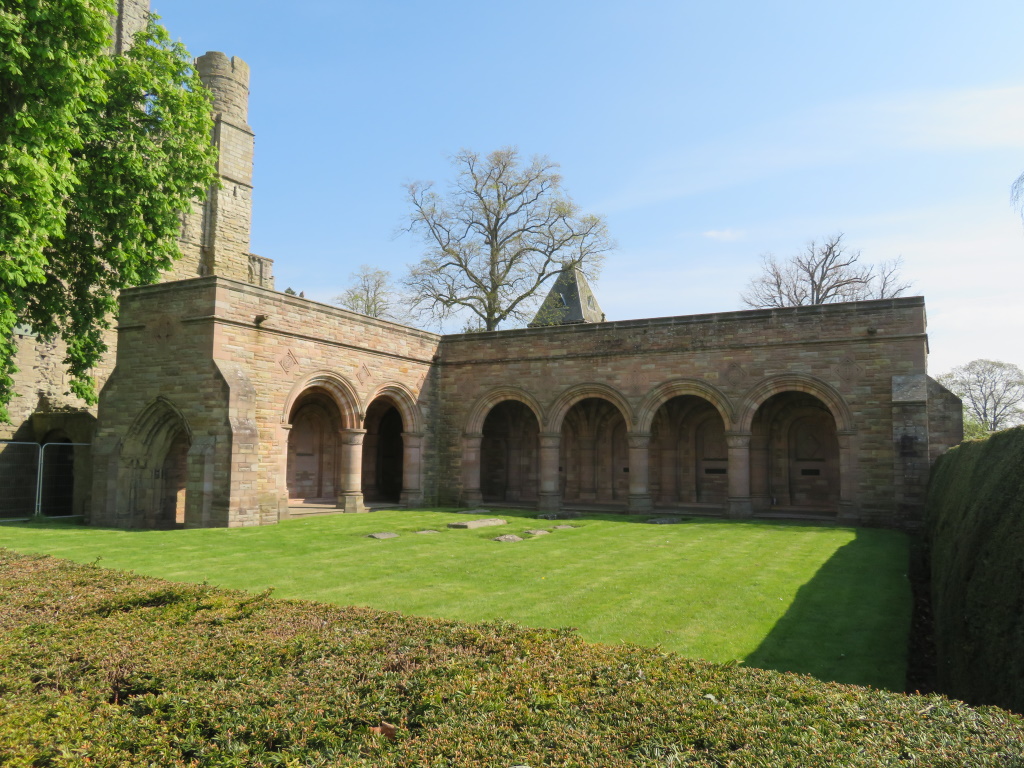 Today it's out of bounds thanks to a danger of death by dying but it's at least on the way to the river, like you weren't expecting a wander, eh?

The River Tweed should come as no surprise, there's already been mention of a museum with its name in it for goodnesses' sakes but boy, what a river! 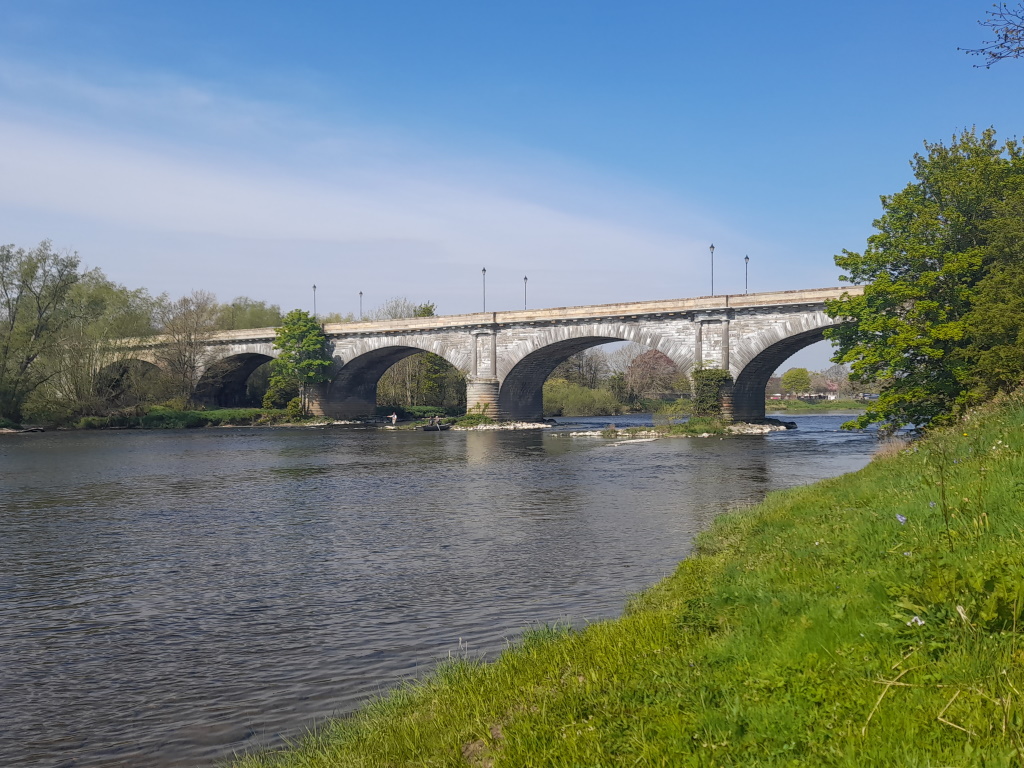 It has gathered plenty of pace by now with just the 20-or-so miles to Berwick and plenty of  fisherfolk taking advantage, permits permitting.

The early 19th-century bridge looks to be classic Thomas Telford, he had a hand in every major navigational project of the era, didn't he?

Not so with this one, rather a Scottish contemporary called John Rennie. Nice work John, the foundations are 200+ years and counting with just the parapets having had to be put right in the 1980s. The next time you walk over Waterloo Bridge in fancy London, you can thank Rennie for using this as practice.

The broad bank makes for a marvellous meander and the rest of Kelso would agree, a fair few minutes wait required for an unobstructed snap. 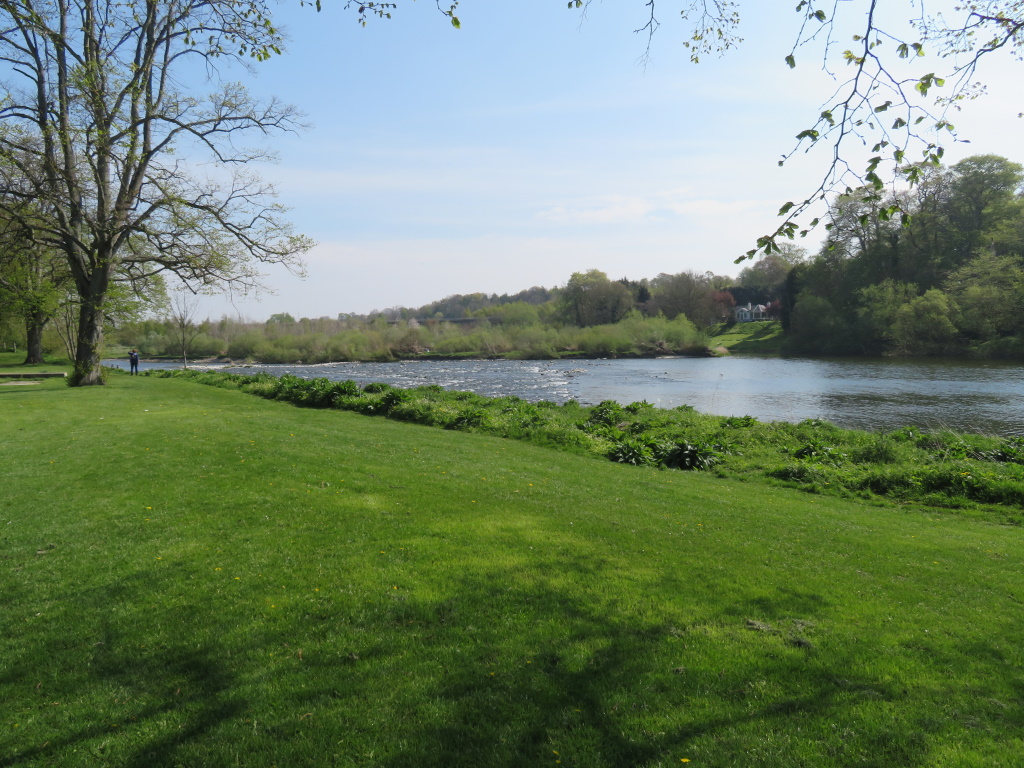 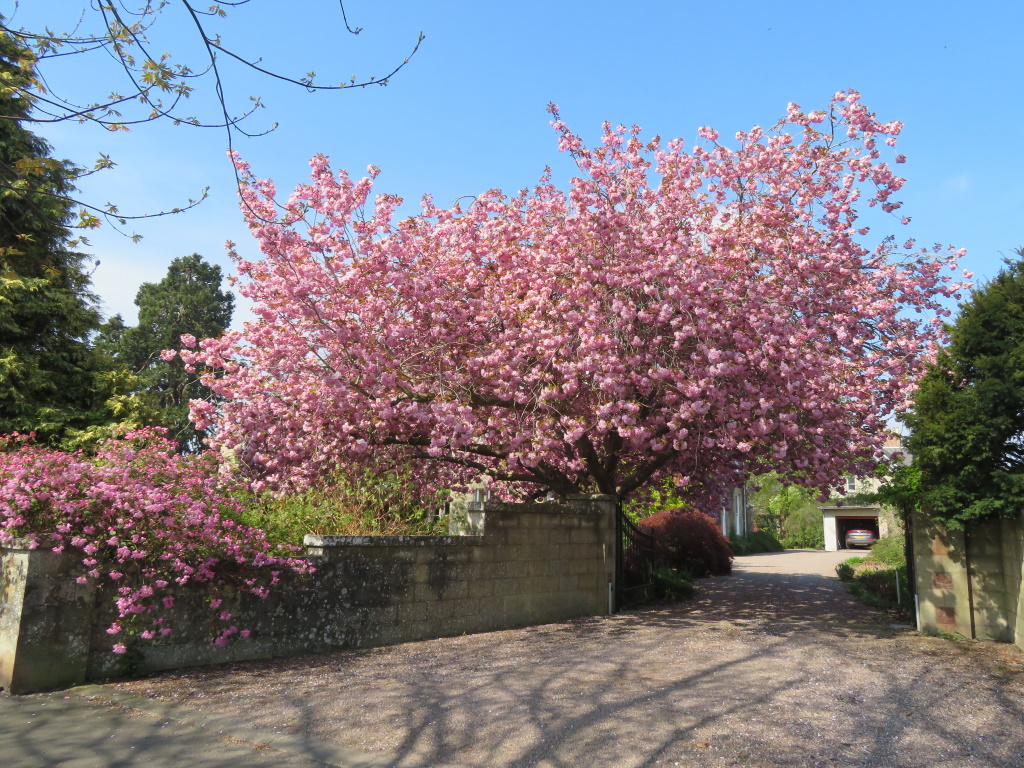 There's a temptation to snuck back into town on Abbotsford Grove but tempted by some impressive blossom, carry on along the narrowing bank through trees to a main road and another bridge from where it's a short hop to a roundabout.

That way finds you at another area of public greenery where Shedden Park doubles up as Kelso Cricket Club's wicket. The town's skate punks are catered for at the far end where LBW stands for Lands on Backside - Wipeout! Right kids? 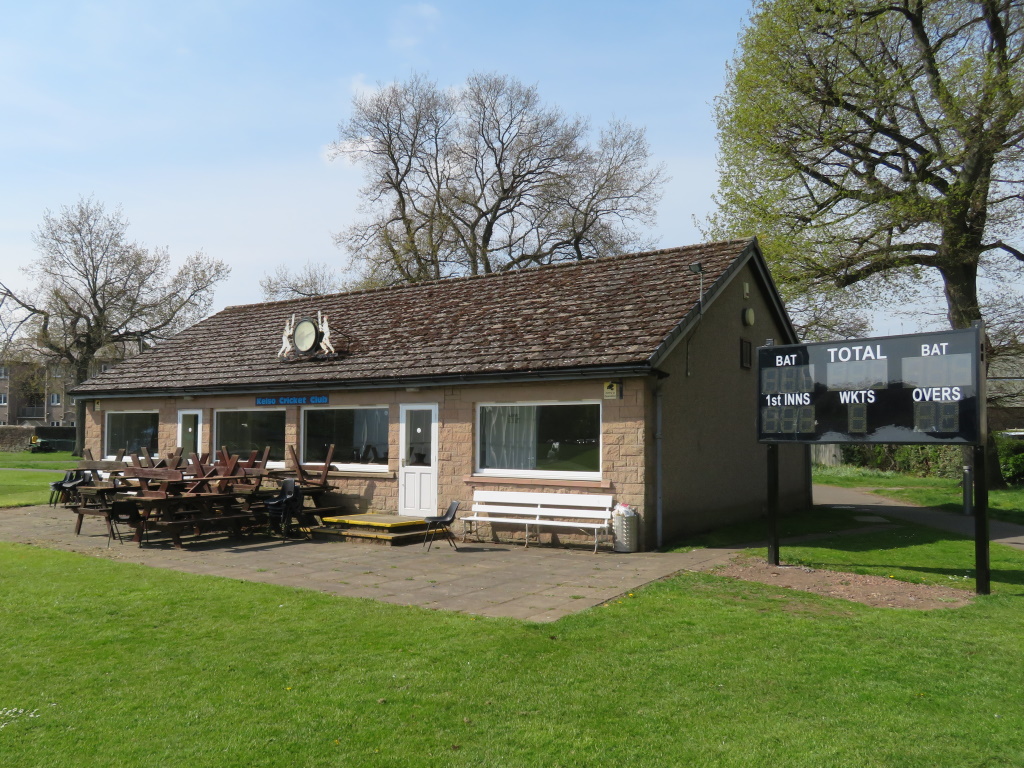 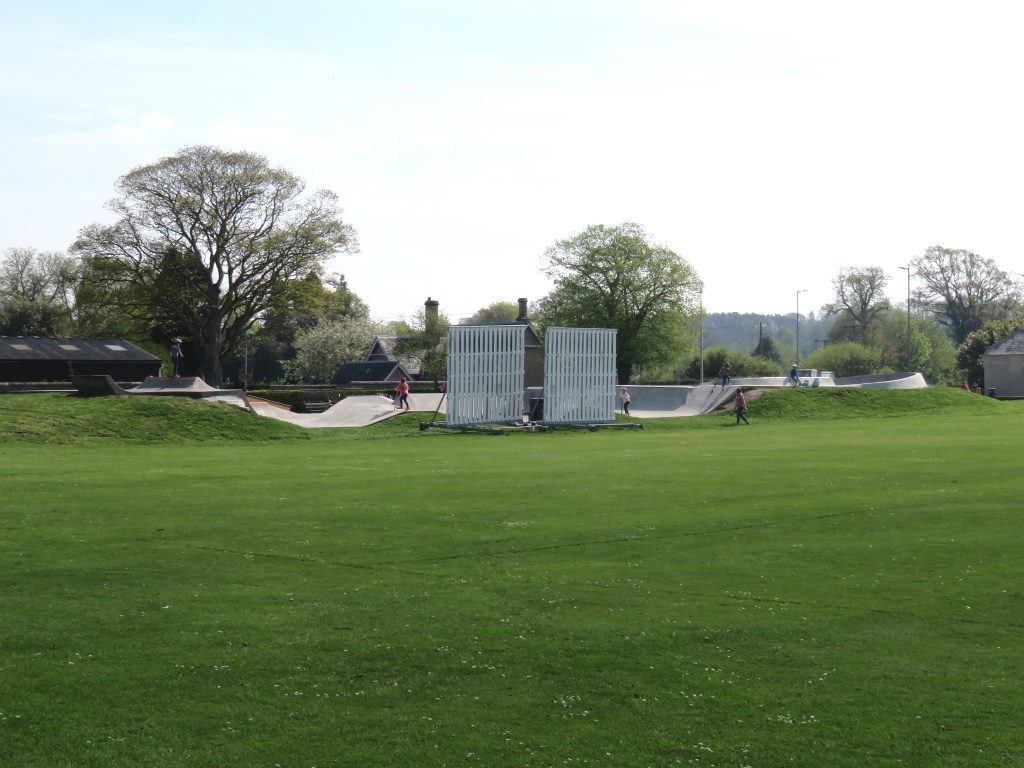 One of the benches facing Shedden Park Road, not shown, claims to be one of the Victorian originals from Lord's Cricket Ground, no less. It seems to have arrived here when they were replaced, as recently as the '80s, and by the looks of it that was nicked from a skip.

The Art Deco explosion, yes explosion, of the 1930s didn't completely bypass Kelso. Tait Hall and the former Roxy Cinema, now a restaurant, still stand amongst the sandstone and the pebble-dashed, so beloved in the Borders, nay Scotland! 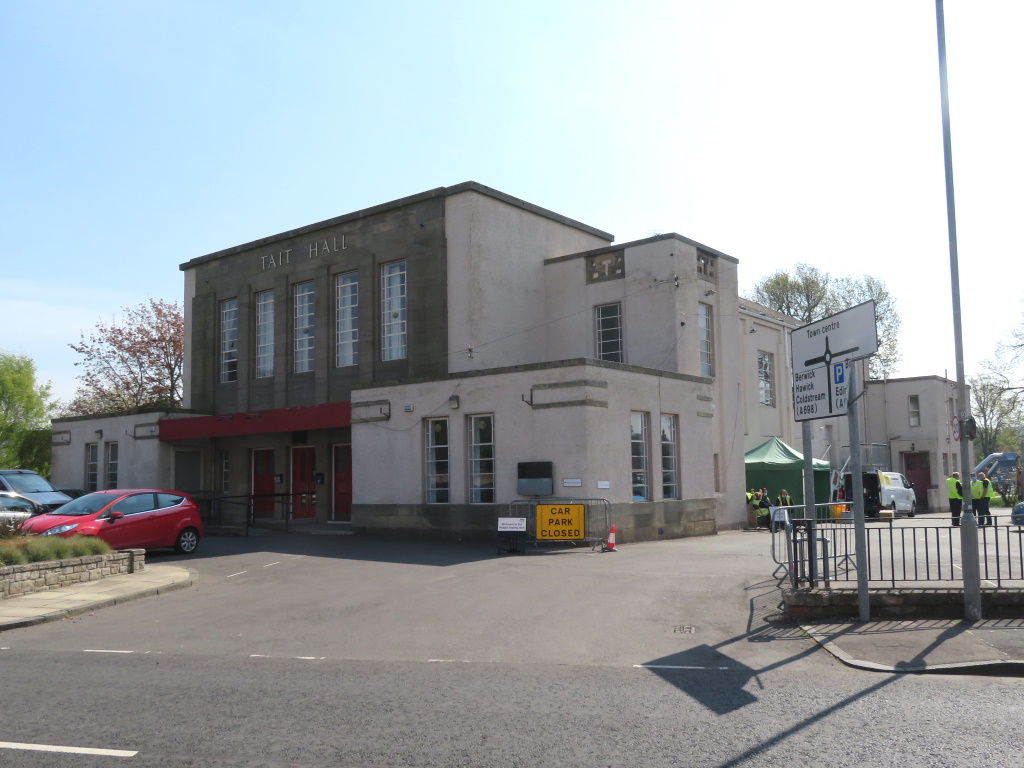 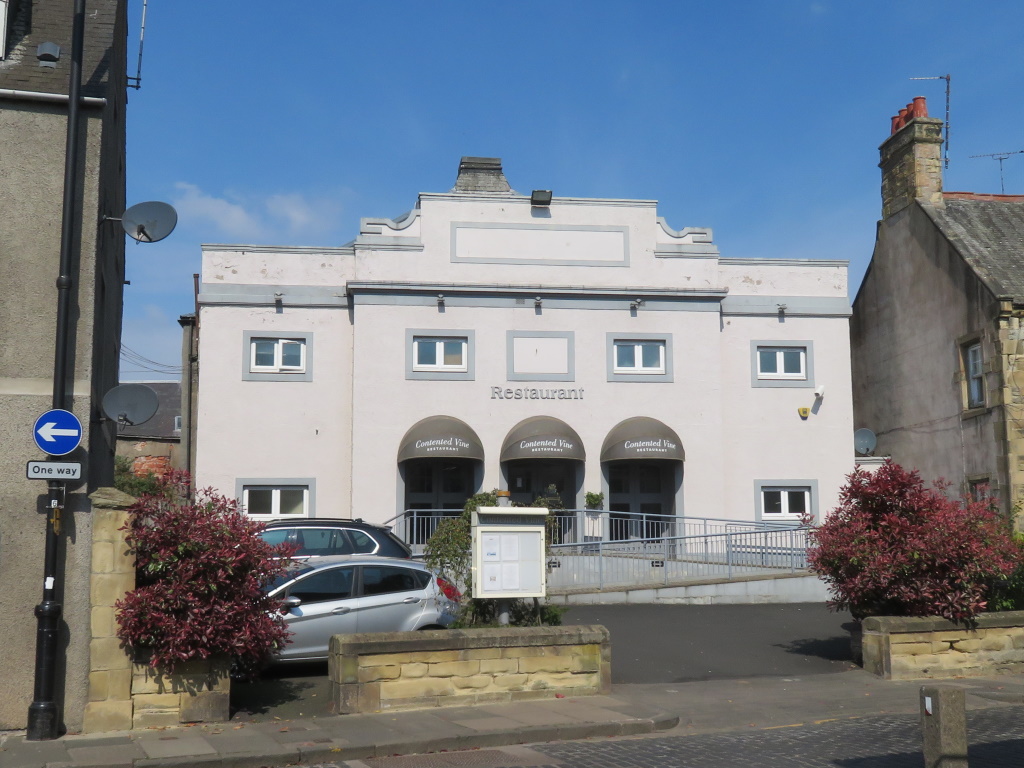 There looks to still be some performing done at the Tait Hall while the Old Parish Church behind the abbey caters for more sophisticated tastes. The big guns, however, play the big room or rather the great outdoors over the river at Floors Castle. Floors Castle?

This is one of Scotland's big hitters, country pile-wise, and just to emphasise, it's Antiques Roadshow-venue big. Bublé, Bryan Adams and Tears for Fears, no less, but no Rod Stewart so that's where any attempted antiques metaphors fail.

It's back in on Woodmarket to be full circle at the square where there's a right bit of bustle this late Saturday morning, Kelso's vendors largely full of things that people actually need, like gin.

You got any Kelso Gin?
Right behind you, where you were just looking, all 40 bottles of it says the man in BeerCraft.

It had been seen advertised somewhere or other the night before but in here, blinded by the branding, perhaps they were victims of you-know-what or were simply unable to compete in a saturated market?

They're very much still bottling and the botanically imaginative is just the tonic with the fruity flavourings rightfully left to their range of liqueurs. They do the distilling themselves so aren't just throwing juniper berries at bathfuls of industrial ethanol, which some of them do you know, you know they do.

They're also just about able to get away with 'Kelso' Gin with the distillery at Ancrum exactly eight miles to the south-west Meanwhile, back in BeerCraft, the shelves are a couple lighter, one for someone else's birthday, by the way, and with an obscure range of hazy pales not seen elsewhere, he can shut up shop and take the afternoon off.

Busy today it may be but the centre was found to be quite genteel of an eve. No rural, feral youth, unless they're up at the skatepark, just a pair of dapper gents in plus fours and tweed who are screaming Rotary Club Dinner.

These parts are pretty conservative, with all the sized cs, and the Scottish Nationalists don't currently bother the east-west band of blue this far south. It's expected not to be quite so quiet in July during Kelso Civic Week with seven days of activities fronted by the 'Kelso Laddie', a youthful man of local renown.

Border reivers are at the root of all of this, fearful and cattle-stealing bandits, really, and the tradition of 'common riding' re-enacts their raids against the English just without the kidnapping of cows. None of this plays to either of SlyBob's particular strengths so, for complimentary visitors to town and fans of their gin, an honourary position is proposed... the 'Kelso Hyderabadi'.

This involves eating in Sultans for seven consecutive nights with accommodation in the Cross Keys laid on for free. Thinking about it, lodgings excepted, that's a tradition that was very nearly started in Montrose!

Scotland's first micropub, they claim, although the current owners aren't the original Rutherfords and it might not even be called Rutherfords now.

It is, indeed, tiny inside so the outdoor seating on an agreeable evening entices. The fridge's crafty contents and a pair of guest draughts are capably managed by a young man from Redcar but there are customers from even farther afield.

A Spanish, Kelso resident is heard to say he made his way here via Huddersfield and is making friends with a group of southern invaders who have all combined to mock the Geordie accent. Not bearing a grudge, a courteous 'Buenas tardes' is offered on the way out but is met with a rather rude rebuke of 'Buenos noches!'

Admittedly, a schoolboy error on the time-of-day-based goodbye but at least Bob's trying. It's bet that between your new best friends there isn't even a single '¡Hola!' from any of them when on holiday, probably.