Outside of Auld Reekie and Glesga, Scottish cities ain't that big and Inverness can vouch for that.

So too is the case with the 'City of Discovery' where it's awfy dreich ootside but the weather's not nearly as bad as it was back in 1879 but more on that in a minute.

Where better to start than in a city's main square and the unimaginatively named City Square is up there with the one in Siena say, seriously. 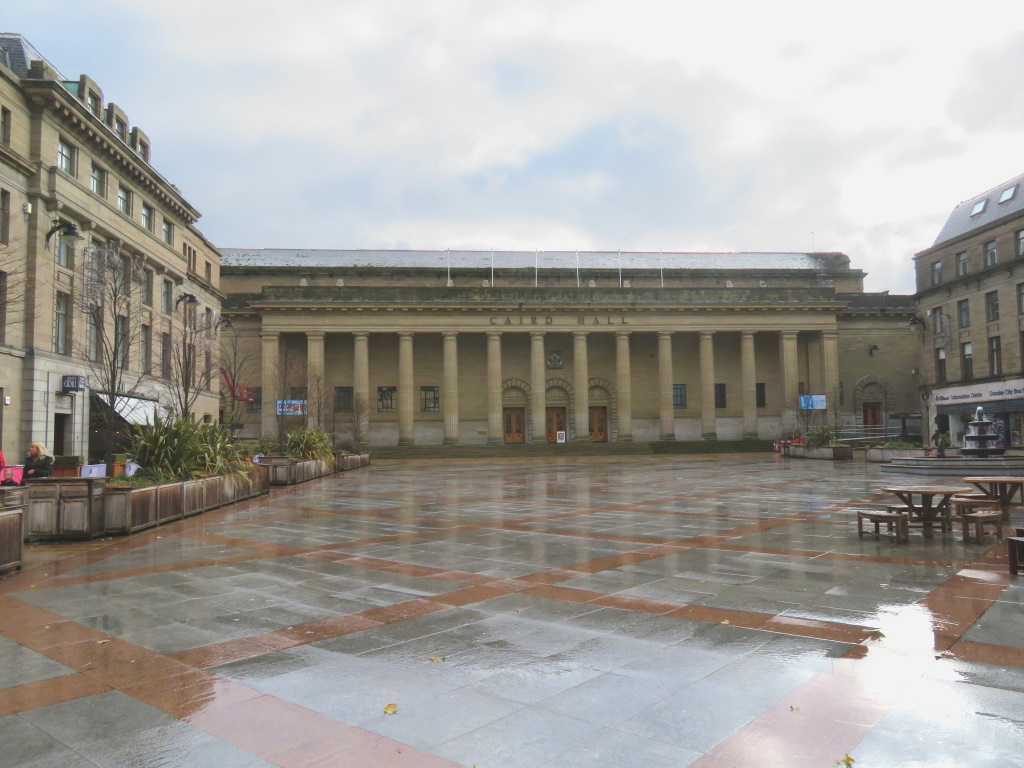 It was a bad year in 1914 to lay the foundations, however, so it wasn't for another 10 until construction was completed. It's classic Neoclassical, obviously, but the budget wouldn't extend to Beaux-Arts, whatever that is exactly.

Taking up one of the three bordered sides, the Caird Hall is still Dundee's main entertainment provider and all of the big players have played here over the years.

Don't fancy humming along to the 'Hook'? Head round the back, then, for some unexpectedly good, but not exactly budget, grub although they're astonished no reservations have been made. That's not an issue, they've enough empty tables to feed all of Hook's audience, probably, and it's best described as 'Modern Scottish'.

A bit if a shame, then, that it now looks to be closed although it's bound to open as something else sometime soon. In the meantime, it's either wait and see or look elsewhere for 'bridies' and 'stovies' both being given the brasserie treatment.

Back in Siena, there's a statue of some old Don, probably, but here, just behind, they've gone with Dan[1] and they must have been desperate, eh? 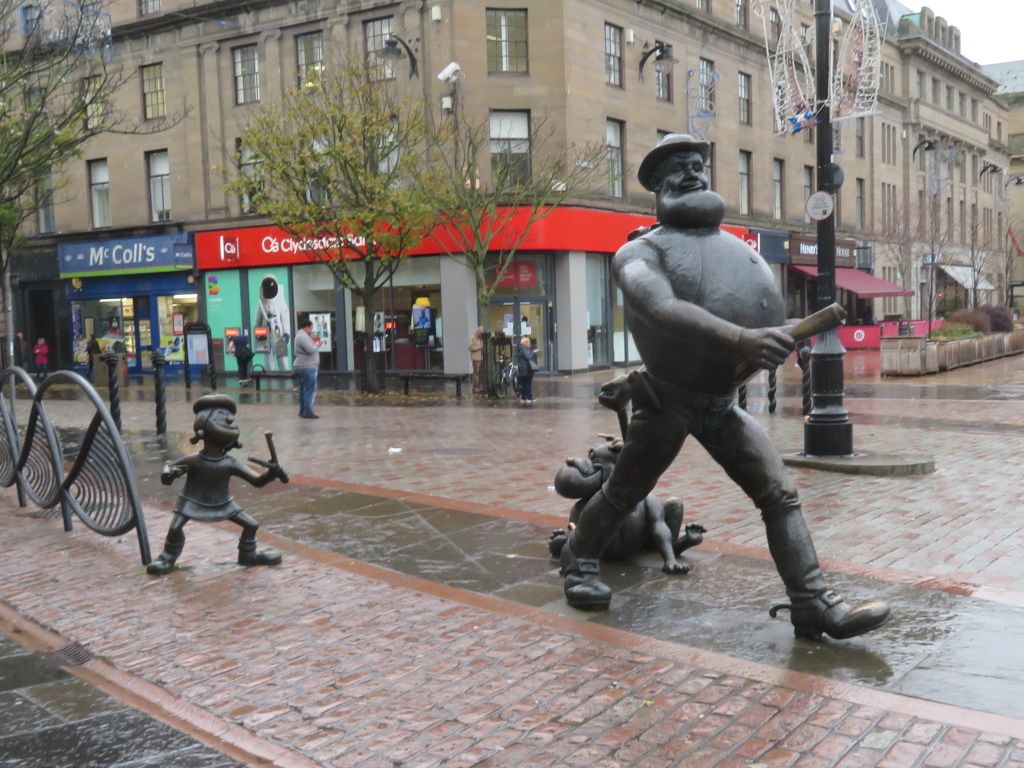 The not-so-dandy[2] Dandy comic strip character, of course, created in Dundee at the headquarters of DC Thomson™, like you didn't know already, but more on them in a minute.

[1] With Minnie the Minx mooching at the back.
[2] For that you'll have to buy a Beano and flip to Lord Snooty.

It's a fine, confined centre with all of the elegance you might expect and a Gothic spire, or is it Neoclassical?, around every corner. 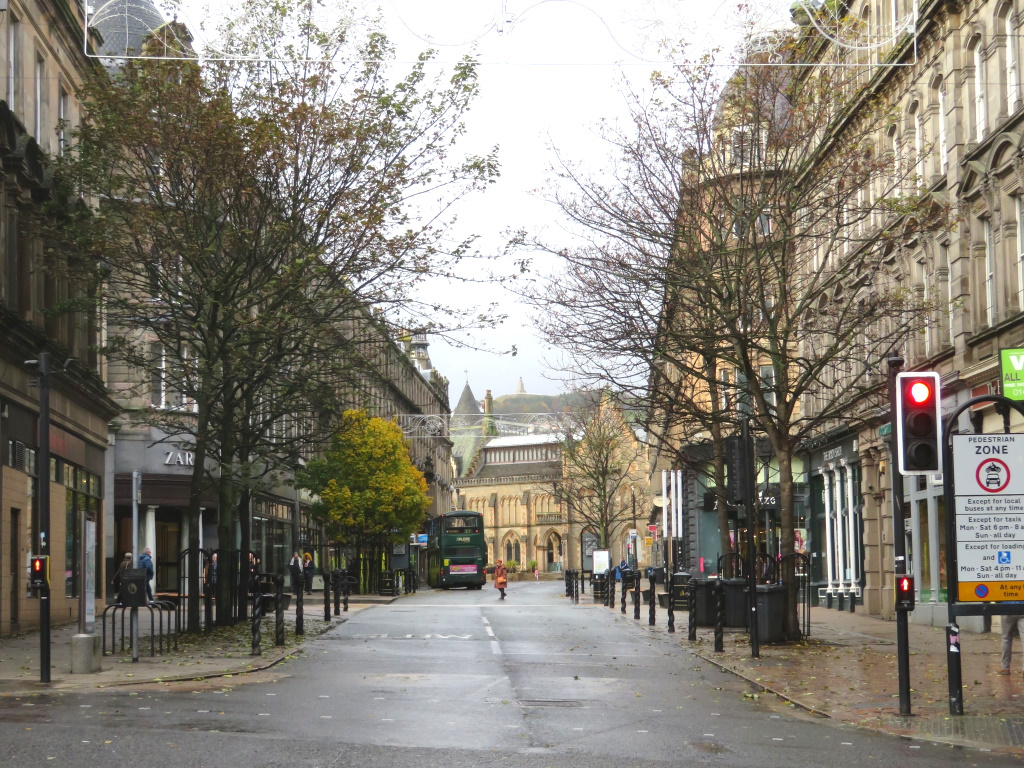 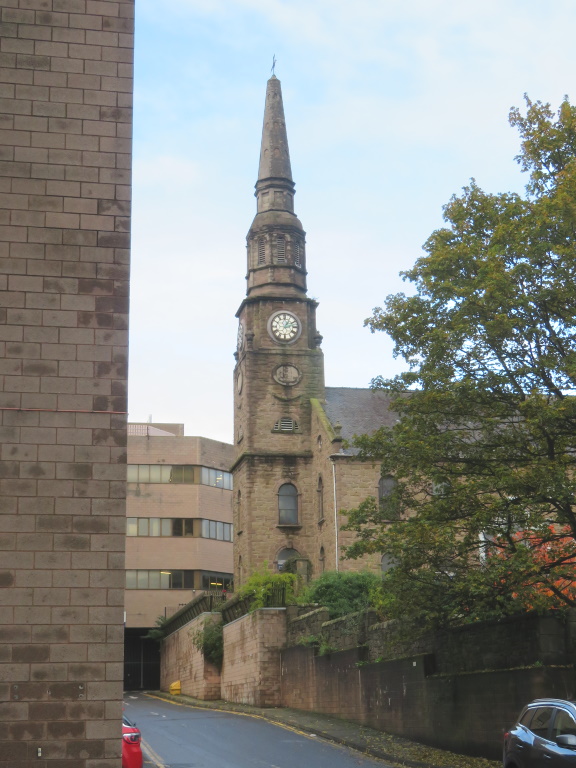 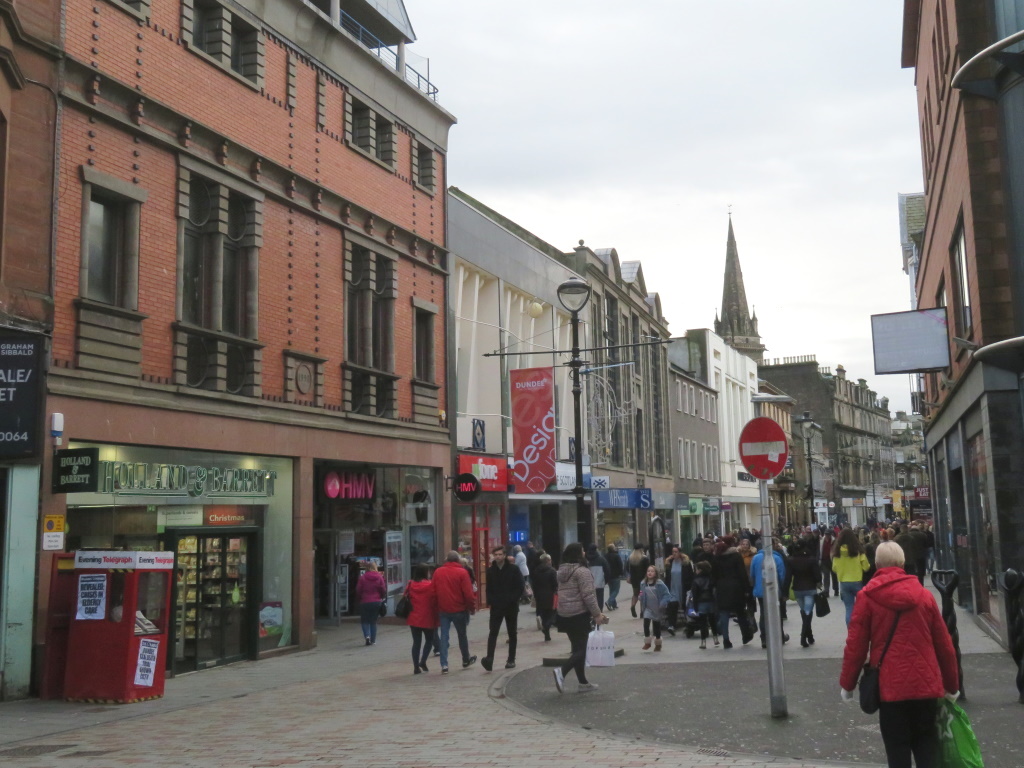 That suggests, if you didn't know already, this is somewhere in Scotland but, sorry Dundee, the standard shopping outlets on Murraygate could just about be anywhere.

The modern Overgate Shopping Centre, however, couldn't just about be anywhere. Not for any particularly unique design even though it abuts the back of a 15th-century church or at least some of it is, they think. 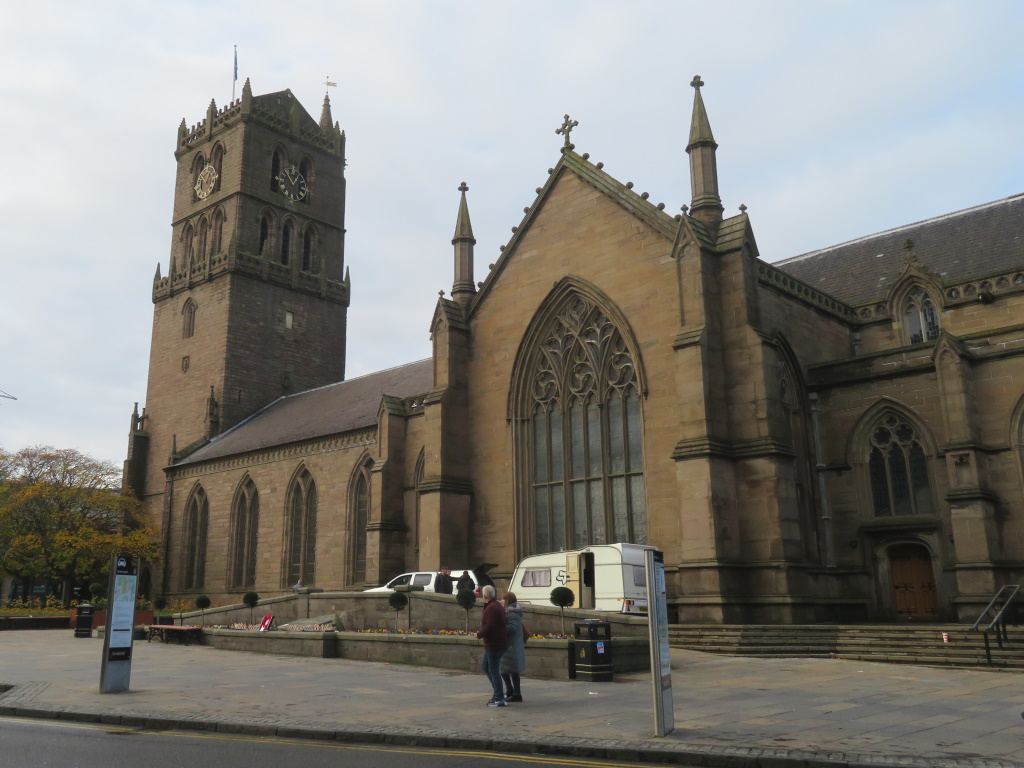 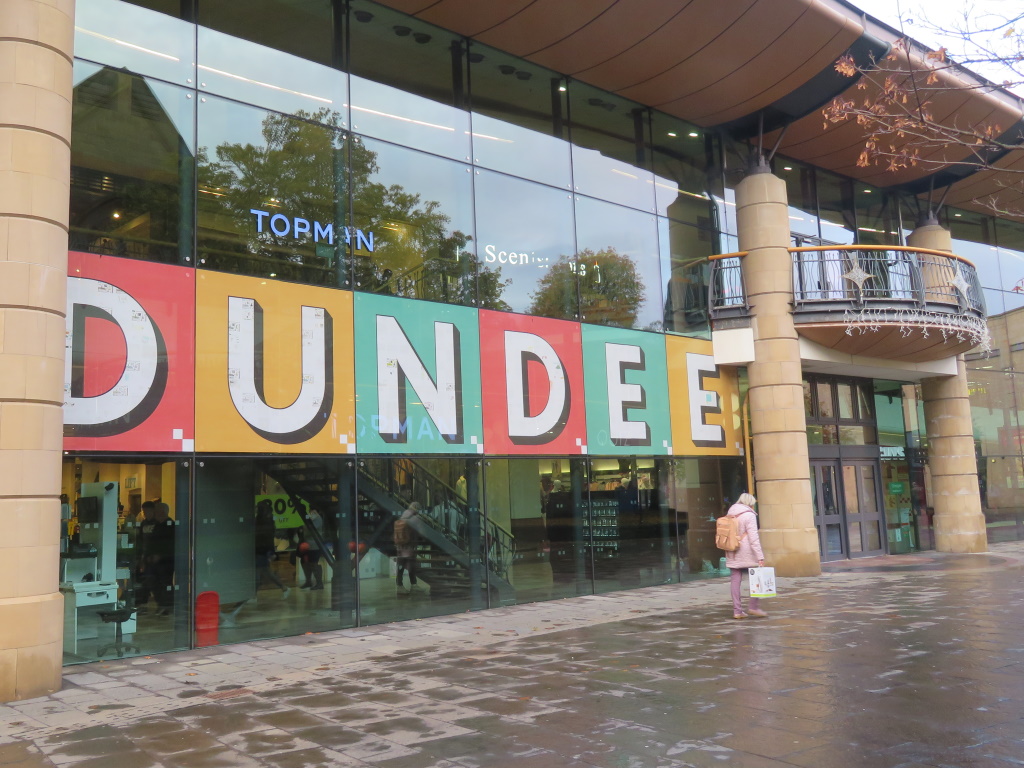 No, this couldn't just about be anywhere because it's got DUNDEE in six-foot-high letters plastered all over it.

Dundonians are clearly inspired by a spire, here's another one, but, as has briefly been seen, they're absolute suckers for a statue. 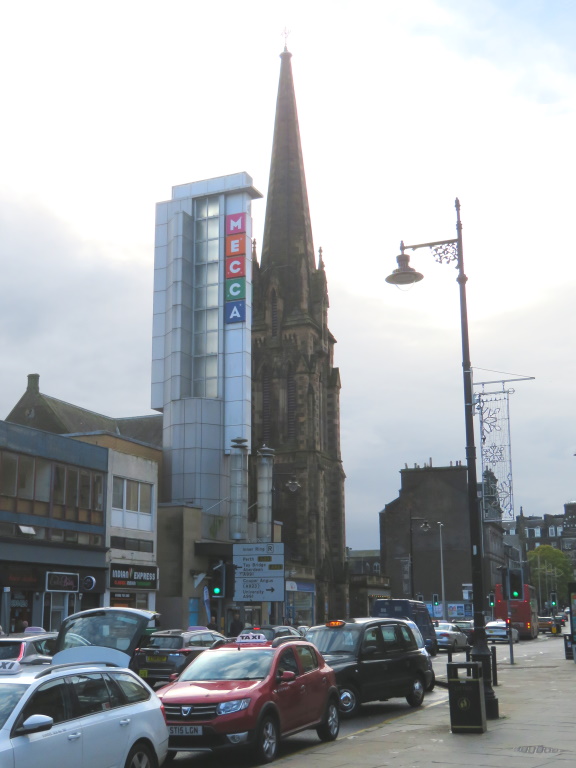 Robert 'The Rabbie' Burns, somewhat inevitably, and the Queen Vic in all her regalia. 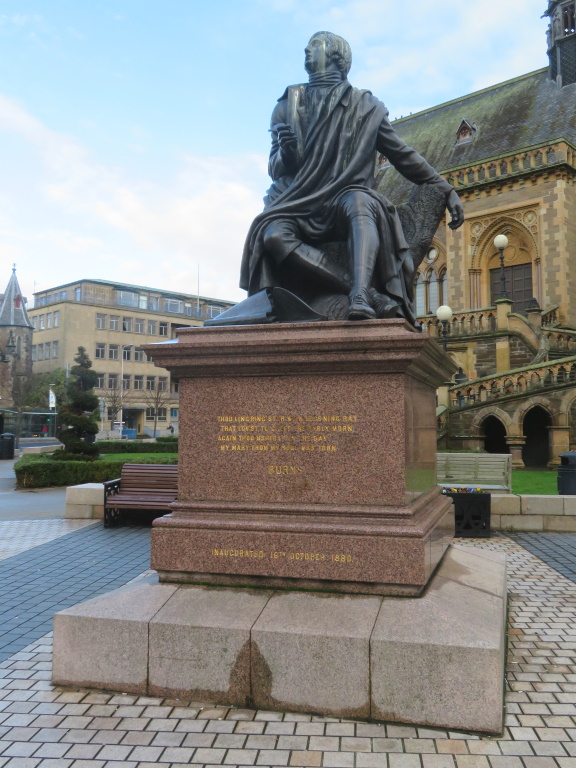 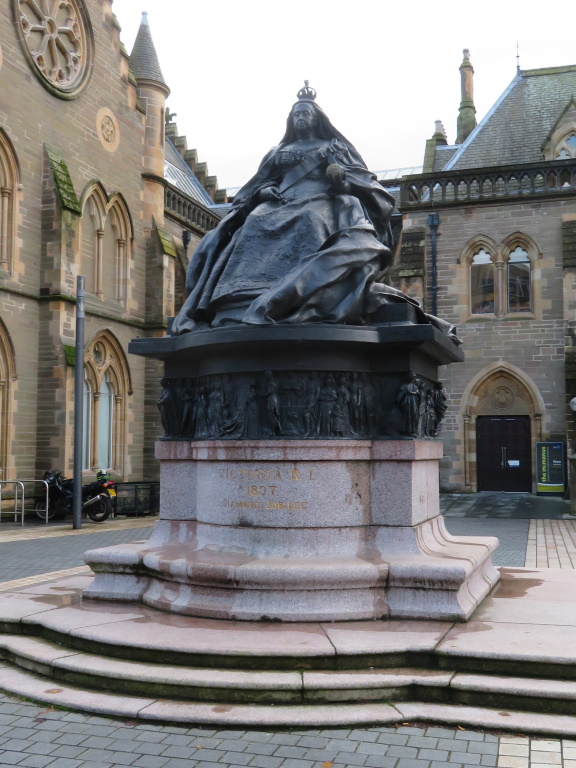 A prominent, local politician in the day, he inherited a Jamaican plantation but would later speak out on the subject of anti-slavery. It's not known if that was just a fashionable stance so it's unclear whether he'll end up in the Tay one day, which is ironic, really, given all of Queen Vic's empire presiding.

There's a promise of more pewter in the form of Oor Wullie™ on a wall but that seems to have been missed by a few months. The BIG Bucket Trail was a temporary attraction, you see, and he's since been auctioned off for children's charities.

They all stand guard outside of, not another church as first thought but, the McManus Art Gallery & Museum, Dundee's best-loved building, no less. 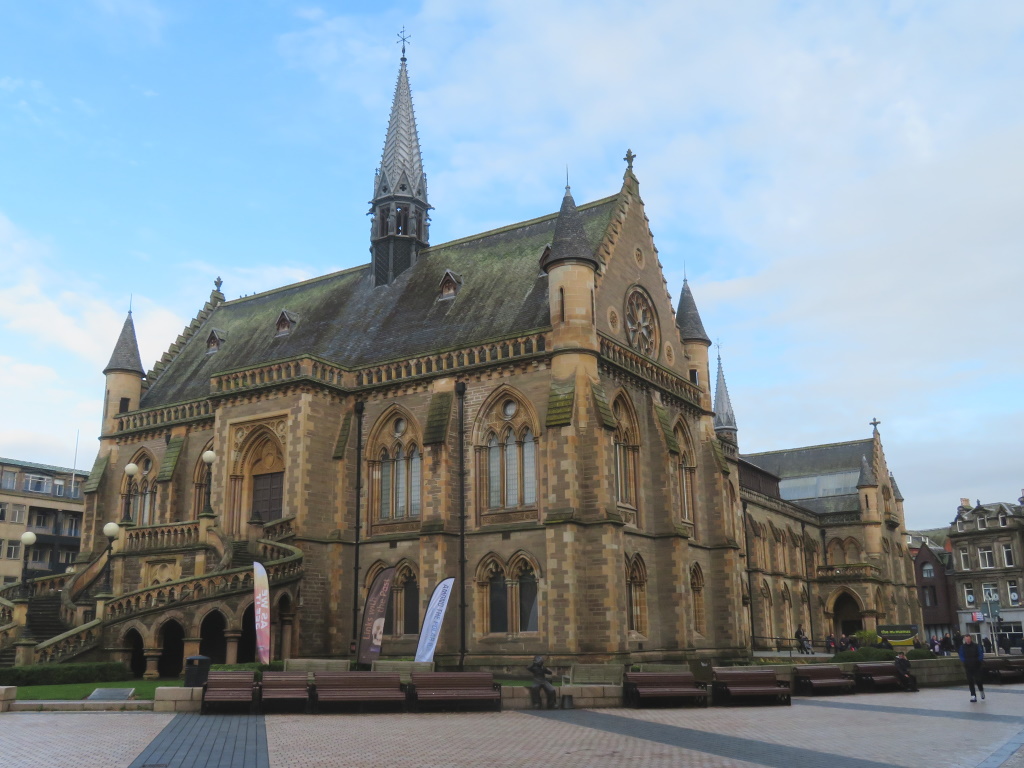 Opened as just that in the 1870s, it's largely free and packs in the local interest including Oor Wullie. Trouble is, it's one of them modern interpretations and looks nothing like he did in the '70s.

Oor Wullie, of course, another creation of DC Thomson™ whose HQ lies just opposite. 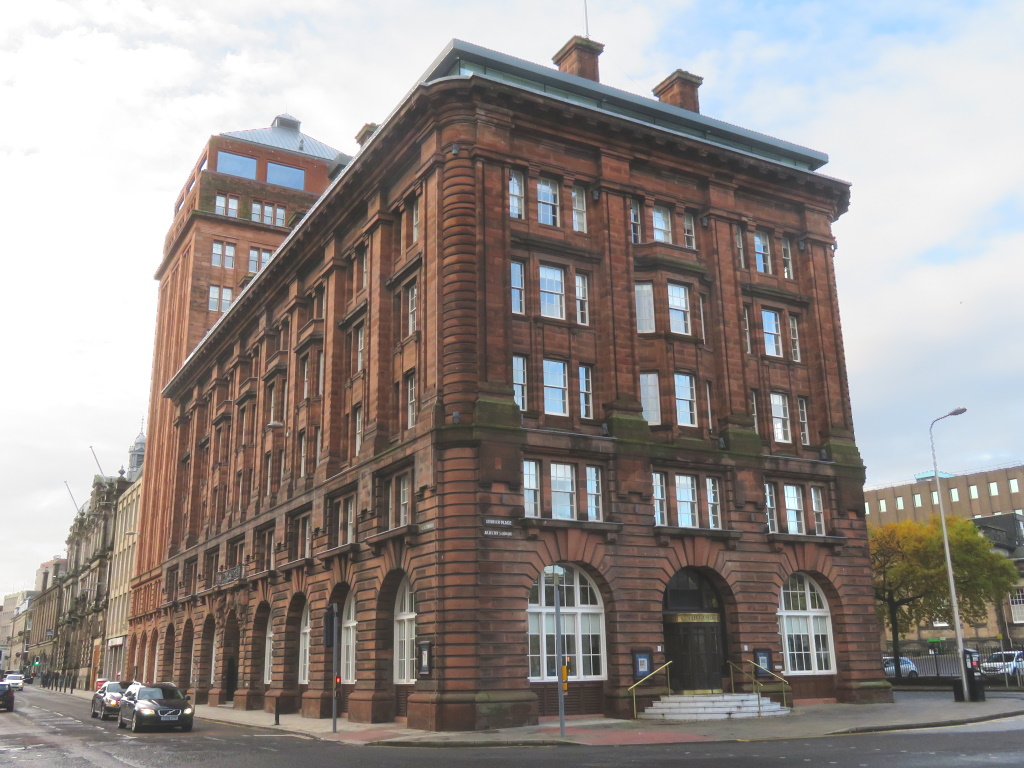 Birthplace of Billy Whizz™, Bully Beef and Chips™, Dennis the Menace™ and Gnasher™, Beryl the Peril™, Winker Watson™, not to mention the Bash Street Kids™, that makes it more of a maternity ward, really, and yes, somebody has put some real effort into that Wikipedia™ article.

They're not just about the doodling, this is still a proper publishers with newspapers and journalists and everything. The comic strips were just a supplement, you see, until they started to be sold separately just before the war.

It's not thought that particular acumen in sidelining was applied when somebody thought it a good idea to buy Friends Reunited™ in 2009. They'd have been better off with Myspace™, right fans?

Comic ramblings aside, this isn't why you Guardian™-reading snobs are here, is it? You want to know all about the V&A Dundee - Scotland's design museum? 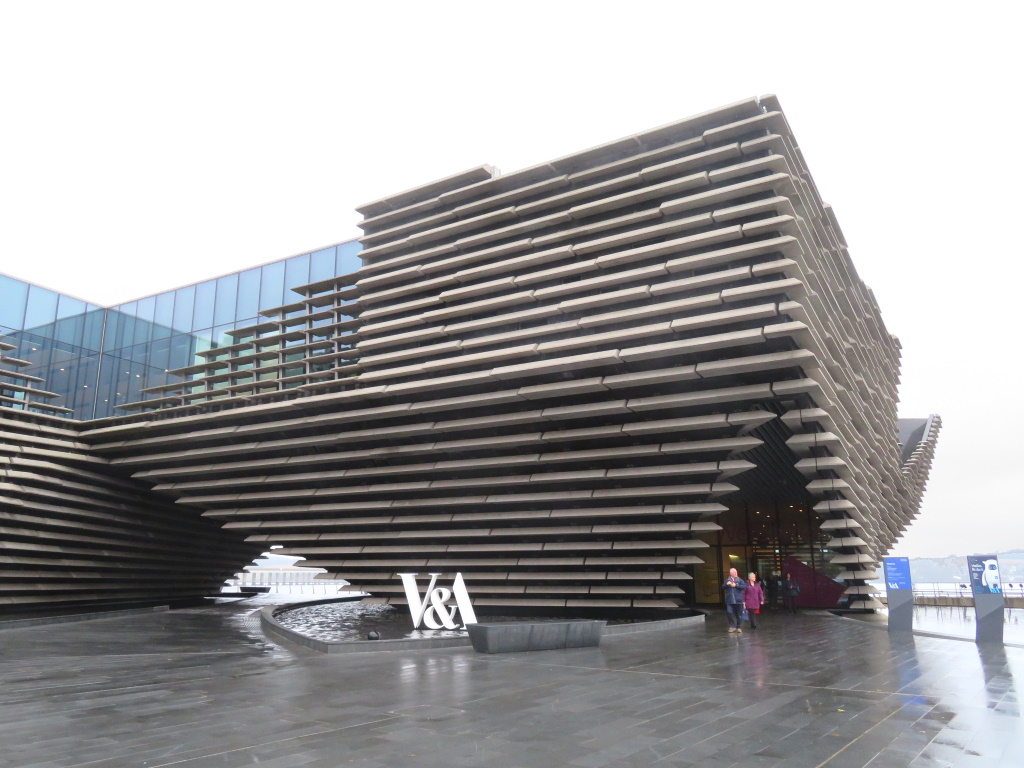 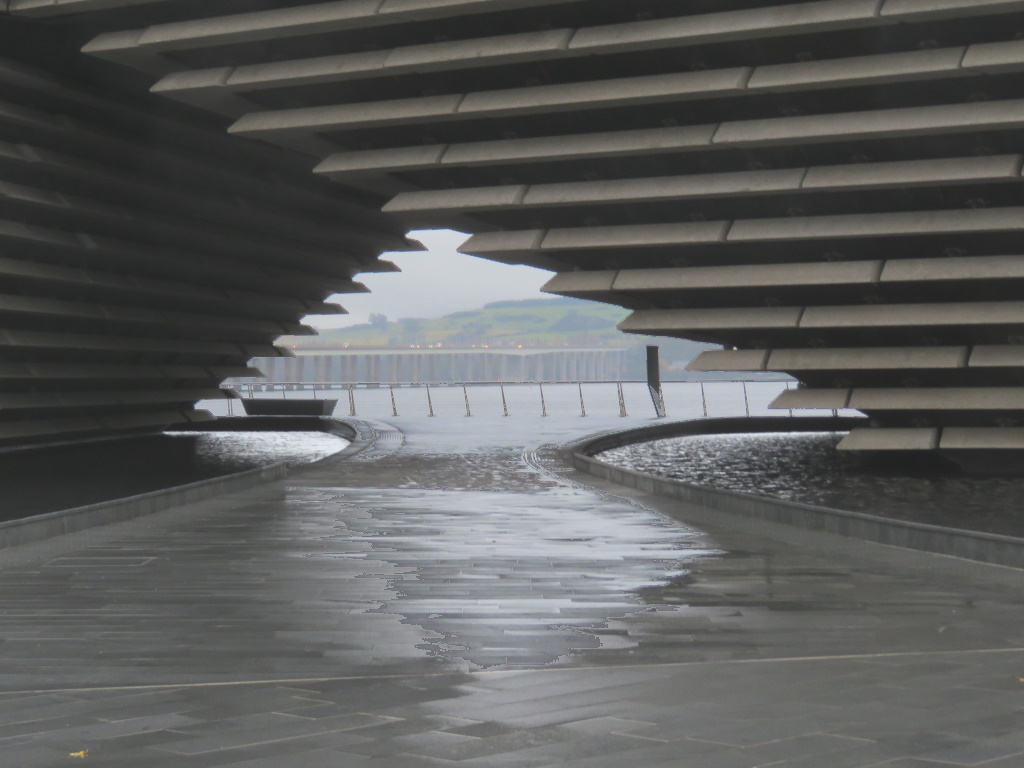 It's quite a piece of work and there's a permanent exhibition of all things Scottish-by-design upstairs. Things are mainly mechanical, functional and decorative but with a few too many frocks for Bob's liking although Sly vehemently disagrees.

Far more interesting is the relatively recent history of computer game design and nerdy kids from the early '80s might want to pay attention.

In the early days of home computing, Clive Sinclair chose Dundee as the manufacturing base for the pioneering ZX Spectrum™. The workers at the Timex™ factory were already well-suited to fiddly assemblings, you see, and it can only be assumed that quite a few of them, well, made their way home.

That's said to have inspired a small generation of junior programmers and Dundee still retains a presence in a global industry that's way, way bigger than Hollywood.

Who knew  Lemmings™ and Grand Theft Auto™ were created and coded here? Turns out quite a few people who are into computer games, actually.

[1] Designed to resemble the cliffs on Scotland's East Coast, apparently.

The V&A provided the interior for the aptly named season 2* episode 'Dundee' of HBO™'s Succession, quite simply one of the superbest television series ever made, ever!

It's a cleverly incorporated nod to Dundee-born Brian Cox, not that one, who portrays the show's pivotal character Logan Roy and he features heavily here.

The V&A isn't the only attraction in this redeveloped bit of riverside. Scott of the Antarctic set sail in a boat built in Dundee and they've brought it back to just about the original spot for the price of an annual pass. 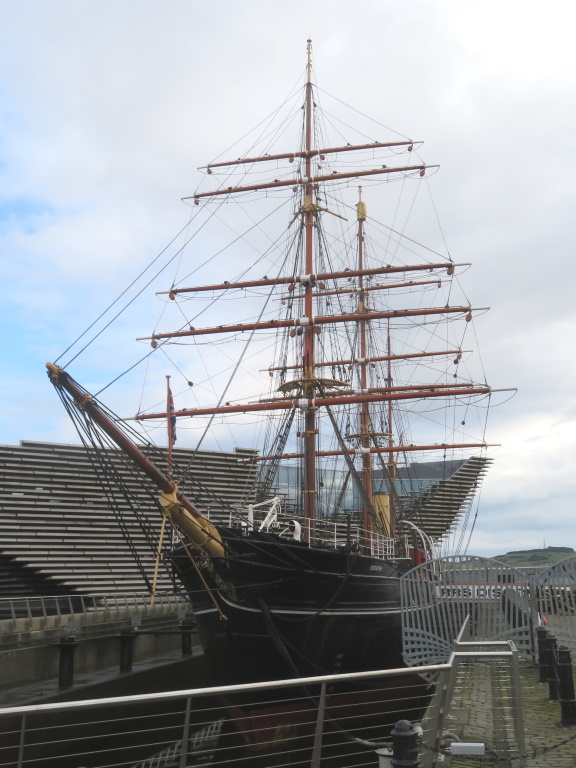 This isn't about the ill-fated expedition to reach the South Pole, rather a scientific assignment some 10 years earlier.

Not that this one didn't exactly go to plan, neither, and what with summers being winters down there, RSS Discovery found itself stuck in ice delaying any return for a year.

Unlike the ice, that's said to have caused a fair bit of friction and you can find out all about it inside the purpose-built centre. 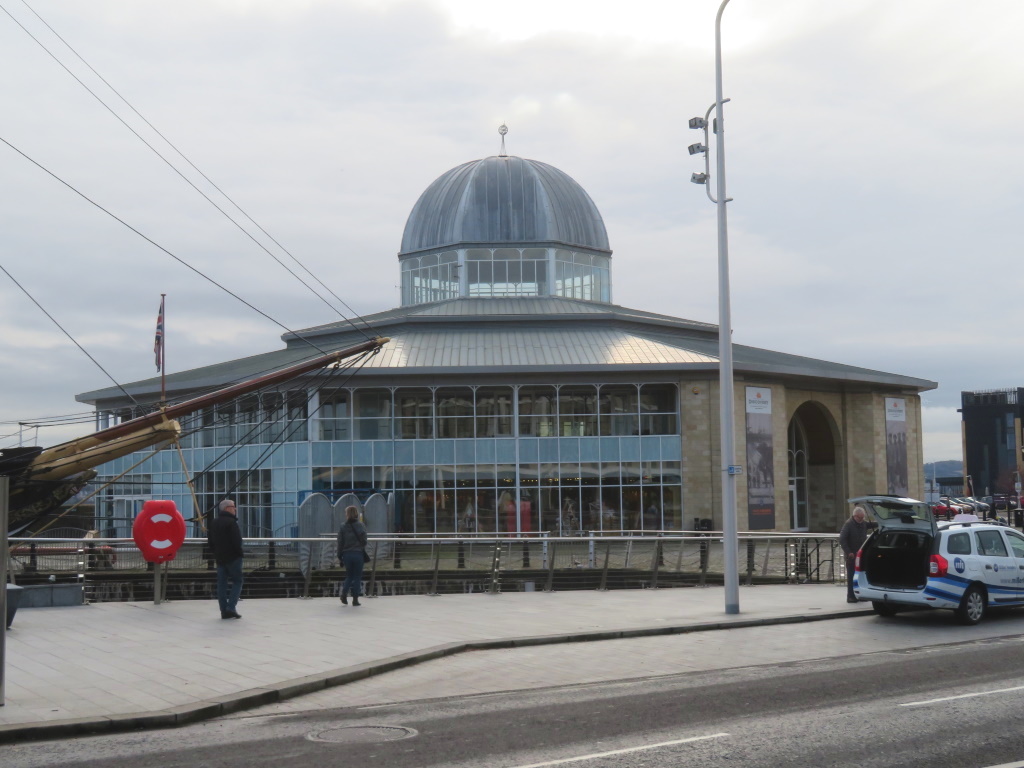 They'll also let you on the boat, by what's now known to be the port side, where conditions don't look to have been too cramped and any meagre rations were supplemented by the consumption of dogs, seriously.

It does, however, look like it would have been a b*gger to heat in winter.

All of this down by the River Tay, of course, and a couple of bridges to make your way across.

The Tay Road Bridge 'obviates', it says here, a 50-mile detour via Perth and that was the case until 1968 when HRH Queen Mum was invited to cut the ribbon. 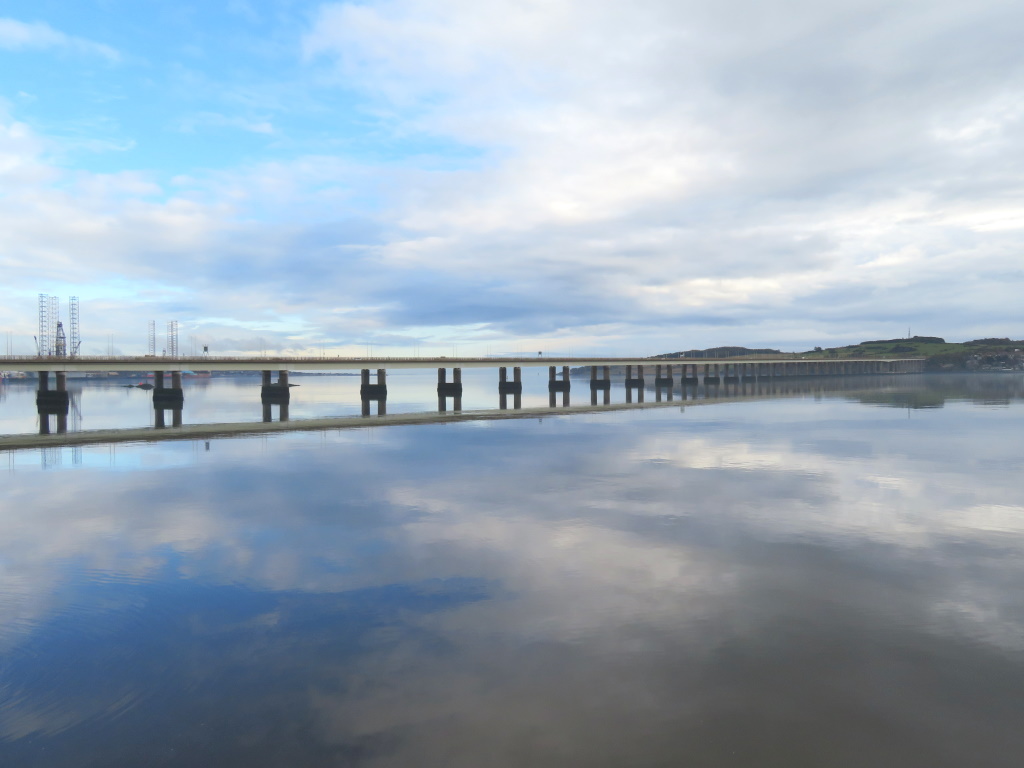 That's still the case, these days, when the wind whips in wildly off the North Sea but why you're out driving in weather that's bad enough to close a bridge should be your main concern, really.

It looks like this from underneath and provides an atmospheric glimpse of the last of the heavy industry to the east. 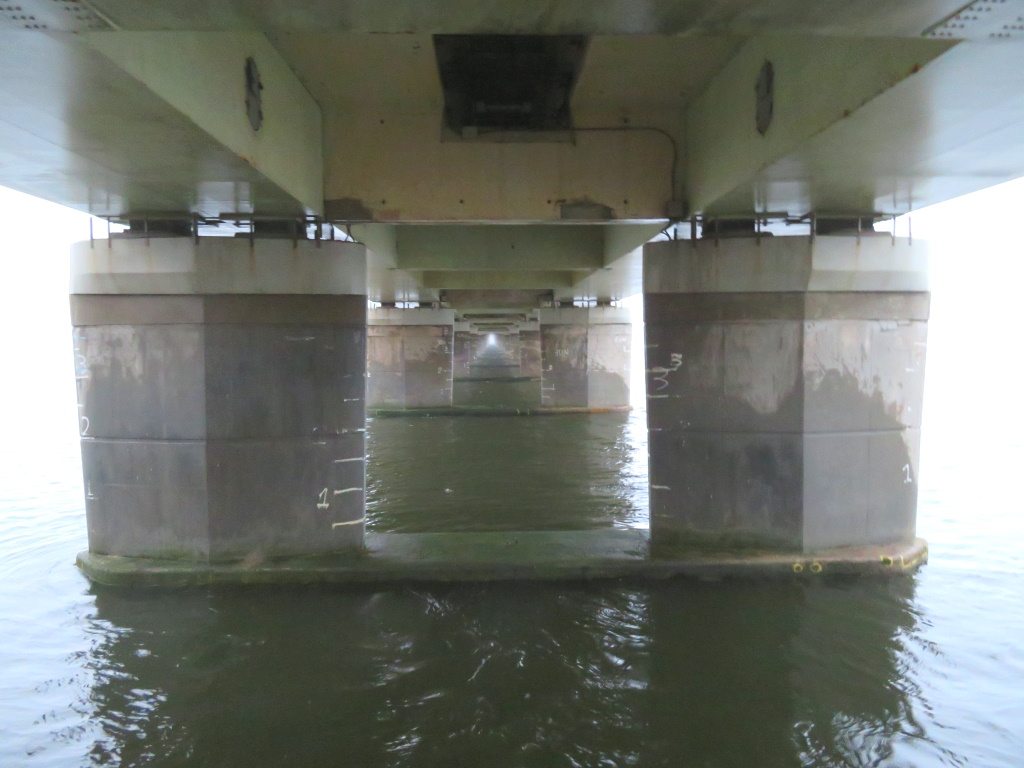 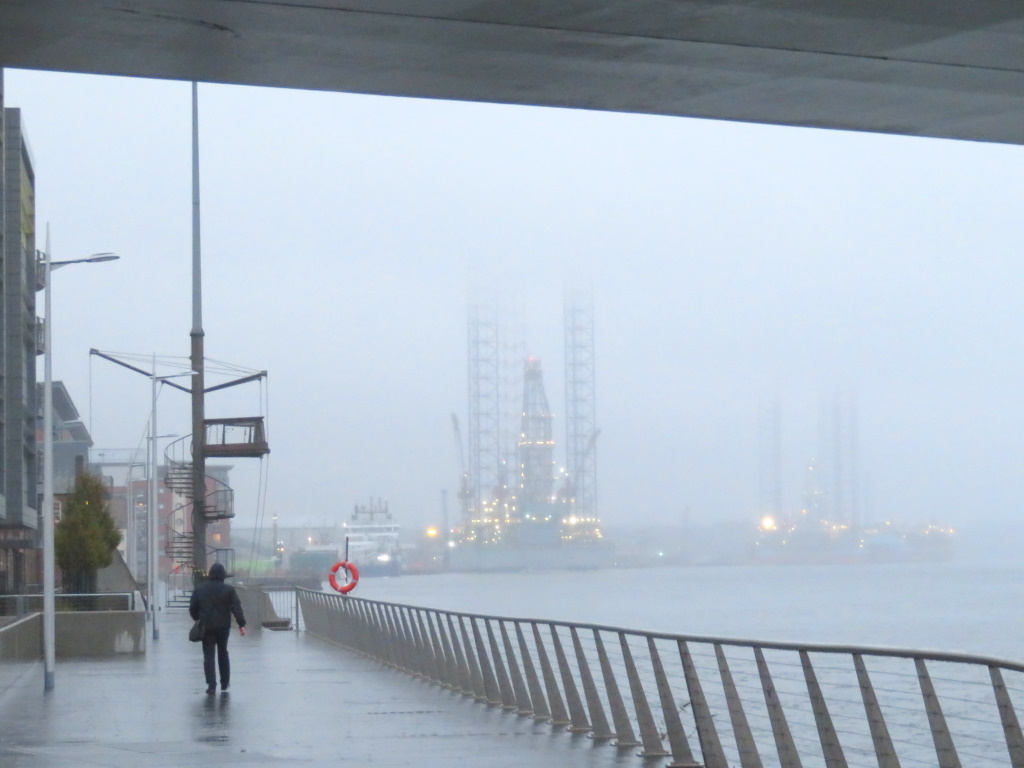 Regeneration of Dundee's waterfront is ongoing but that of the old docks looks to be largely complete. Highlights include a 19th-century warship, water-based activities for thrill-seeking nutjobs and some half-occupied commercial units inside one of which they look to be knocking up a new computer game

There's also somewhere to nap after a long afternoon dawdling around Dundee but both all-you-can-eat buffets insist all members of your large party pay for a plate. Dunno if that's a Dundee thing but it seems unthinkable to think anyone could consider filling up for free on someone else's leftovers?

The development itself isn't that remarkable, the glassy, generic gentrification could just about be anywhere although the old warehouses retain a bit of local character. What is remarkable, however, is by the time you get round to compiling this claptrap, there isn't a single photograph of any of it!

The Tay Rail Bridge, on the other hand, comes in at 1887 although it would have hoped to be nearly 10 years older. 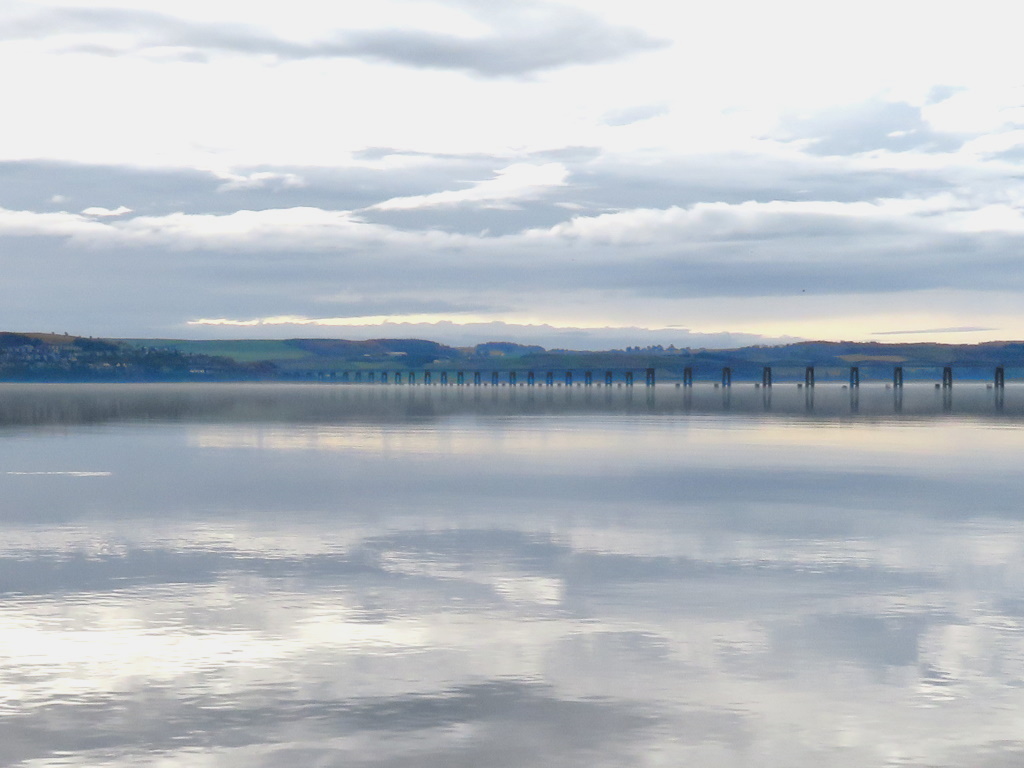 Despite being too far away, the original piles are just about visible and a reminder of when, two days after Boxing Day in 1879, it, well, collapsed, like you didn't know already.

Eighty mph gusts at all the right angles accounted for the estimated 75 casualties and this only 18 months after opening.

In that time the designer Thomas Bouch had been knighted but his reputation would soon, not unexpectedly, be slighted and he too was no more within the year, also stress-related, no doubt.

Promoting the shipment of coal by train back then, the Board of Trade needed a patsy, it seems, and accusations of shoddy manufacturing, out of Bouch's hands, were overlooked. As were the extremely extreme conditions and no one thinking it a good idea to set the signal to red.

You won't find that on Wikipedia™, you'll need to head to Broughty Ferry for a chat with a very knowledgable chap who's a member of staff at Broughty Castle and, with highsight, now sounded like a direct and very defensive descendent of Bouch.

It's thought to have been long enough ago to use the phrase 'at least one good thing came out of it.' The prose of William McGonagall, no less, universally acclaimed to have been the worst poet, ever!...

Beautiful Railway Bridge of the Silv’ry Tay!
Alas! I am very sorry to say
That 90 lives have been taken away
On the last Sabbath day of 1879,
Which will be remember’d for a very long time.

Now, it's not claimed that any of this nonsense is worthy of a Pulitzer but, deary me.

The waterside developments have transformed the area by the Tay but there's still some work in progress back in town with the Continental Restaurant & Ballroom not returning any calls for a reservation. 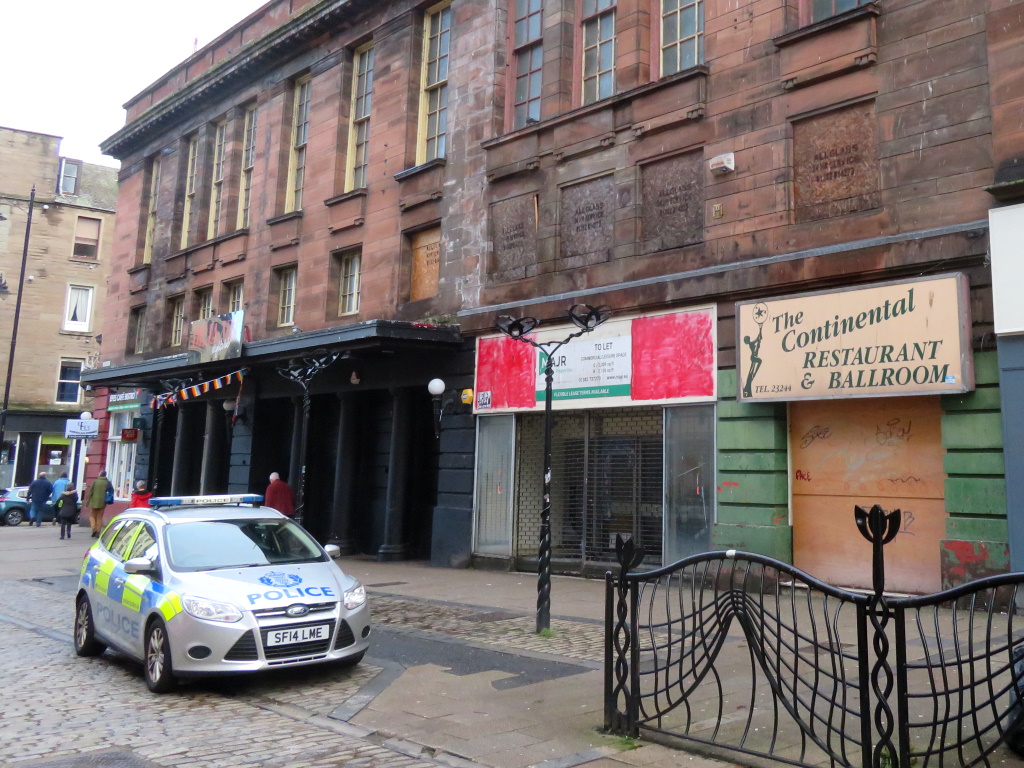 Not that you'll be stuck for somewhere to dine, this is a big student town evidenced by a few foot-long beards and the hipsters have well and truly invaded.

'Kebabs. Done Right.' might sound like a contradiction but only if your reference point is the virtually vegan option of the ubiquitous elephant's foot.

Combined with an 'aperitif' in the Edinburgh-based Innis and Gunn's Brewery Taproom, this will have you wondering why you've never been to Dundee before?

Their dosas are the size of a pillow and you can finish the rest off tomorrow morning, cold, when, much to Dundee's delight, England will lose the 2019 Rugby World Cup final.

Back near City Square, St Paul's Cathedral may not honour the famous apostle but some space is given over to the lesser-known Admiral Duncan[1]. 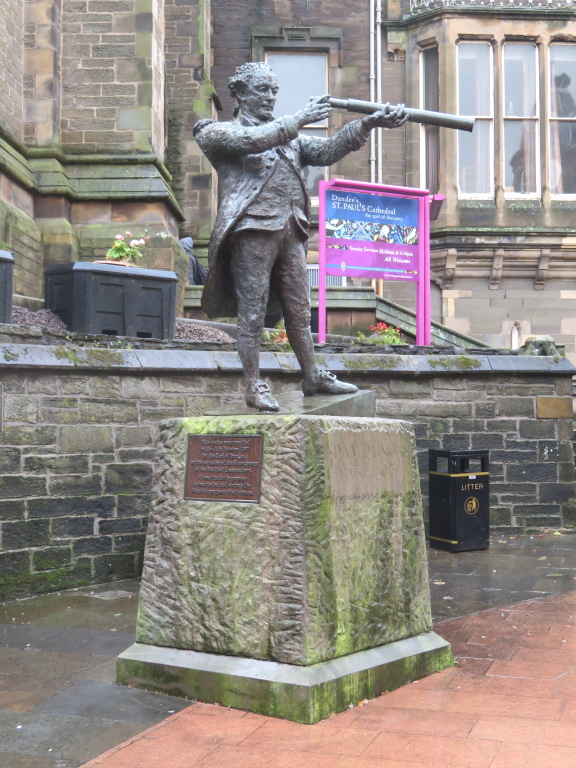 Dundee-born Adam Duncan saw off the Dutch in one of the most significant battles in naval history, they say. That was in 1797 so to 'celebrate' 200 years since the spanking, he now makes an appearance in his hometown even though he doesn't seem too sure how to use his new-fangled telescope.

Except, the bicentennial anniversary wasn't the real reason for his installation. No, less than a year earlier the Dutch were given another thrashing only this time at  Euro '96 and the gap is just the time it takes to get the casting done.

That's a joke, of course, this is Scotland, remember, and the cheers during the 2019 Rugby World Cup final will remind you of that.

[1] Only lesser-known, though, if you're not a military historian.