Rye is a perfectly preserved, medieval hilltop-town, it says here, and it's being thought yeah, right! That normally means a fenced-off piece of castle and a Costa™s in the old gaolhouse. 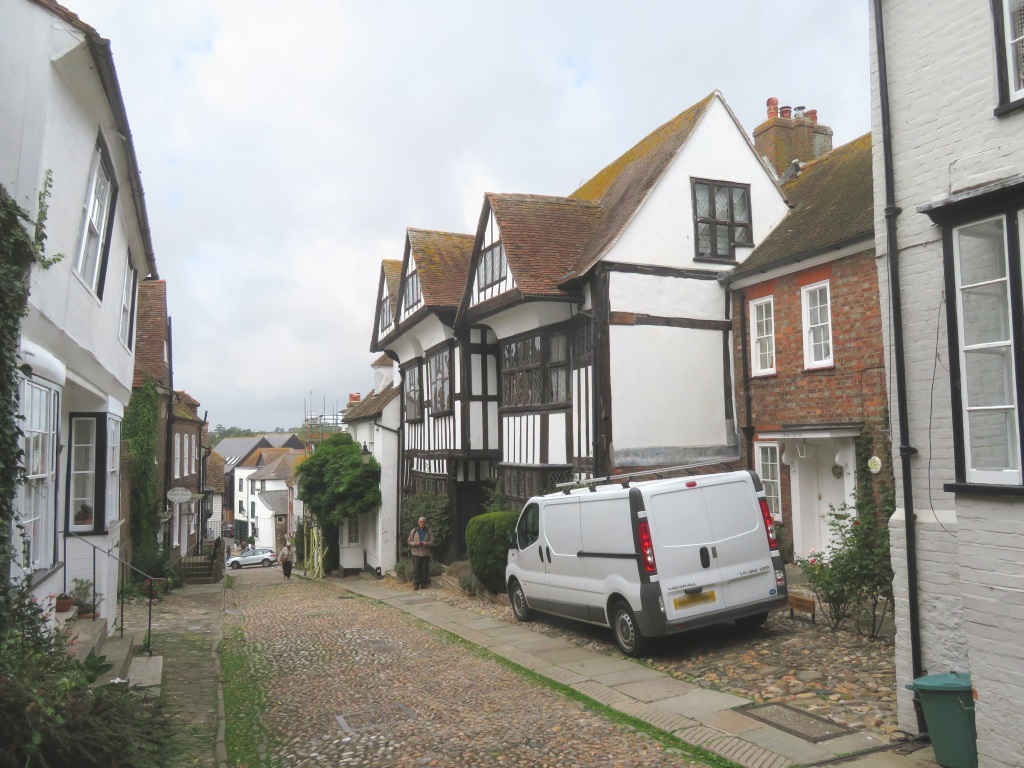 Heading up the not too steep a lug, however, and it looks like here's a perfectly preserved, medieval hilltop-town alright!

The second thing noticed is that they're a pun-heavy bunch. 'Catcher in Rye' for your fish and chips, of course, ' Pocket Full of Rye' for all your knick-knacks, obviously, but 'The Devil in Rye'? 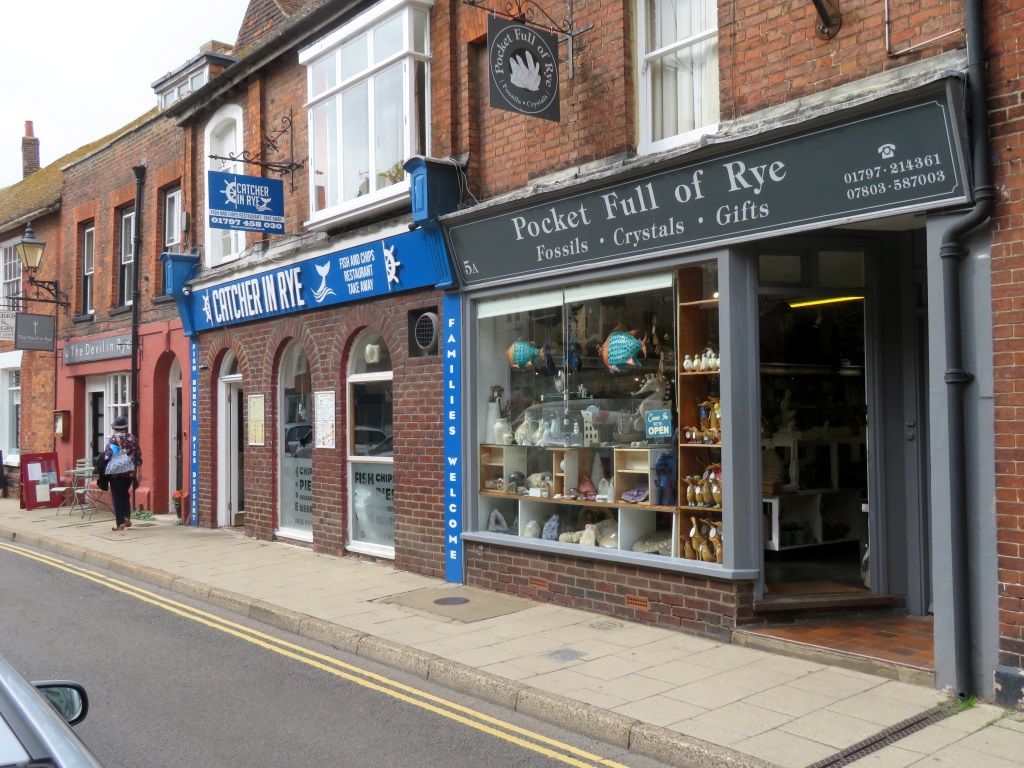 Fancy, Indian dining, apparently, but isn't 'The Jalf-Rye-zi' much better?

It's thought the local bakery is also missing a trick, what's wrong with just 'Rye Bread'? It's probably because they also do a fair bit of patisserie but using that name, SlyBob reckons they could mop up with our artisan sourdough, freshly baked focaccia and hipster Courier font.

That'll all likely involve a 3 AM start so, thinking about it properly, we're oot.

There used to be four portals to the old town but only the Landgate has lasted this long. Edward III and 1329 are the key stats and it still lets delivery drivers and lost holidaymakers through. 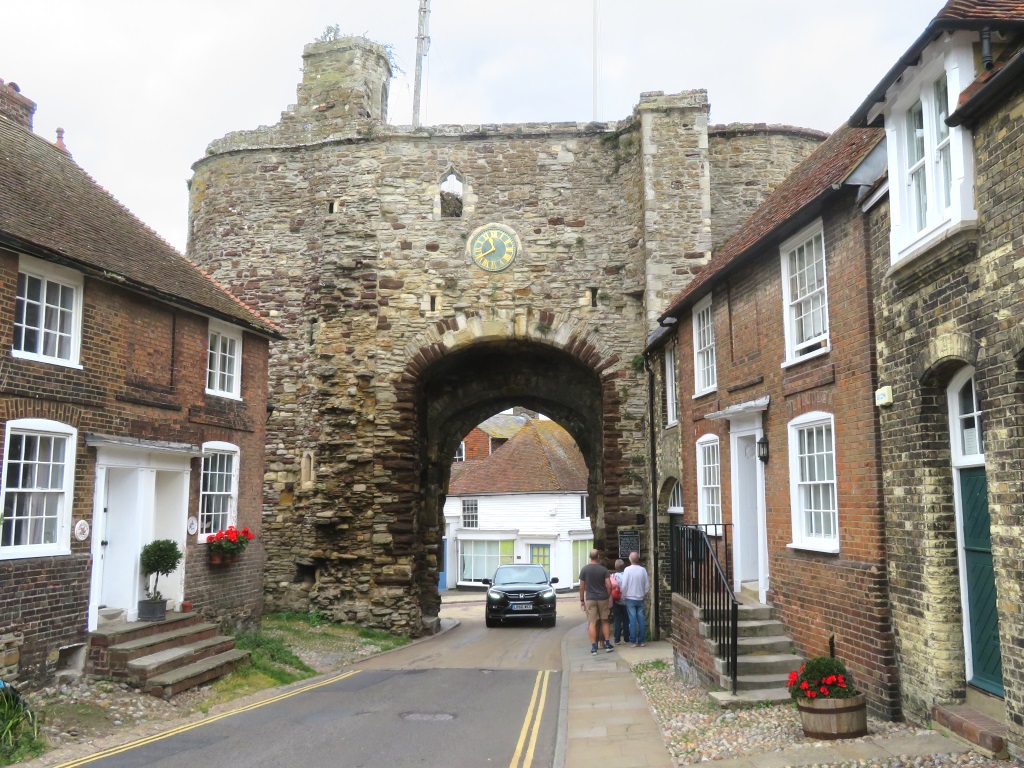 That means watching your Green Cross Code™s as you gently ascend for there's more history to be had up the Rye-se. 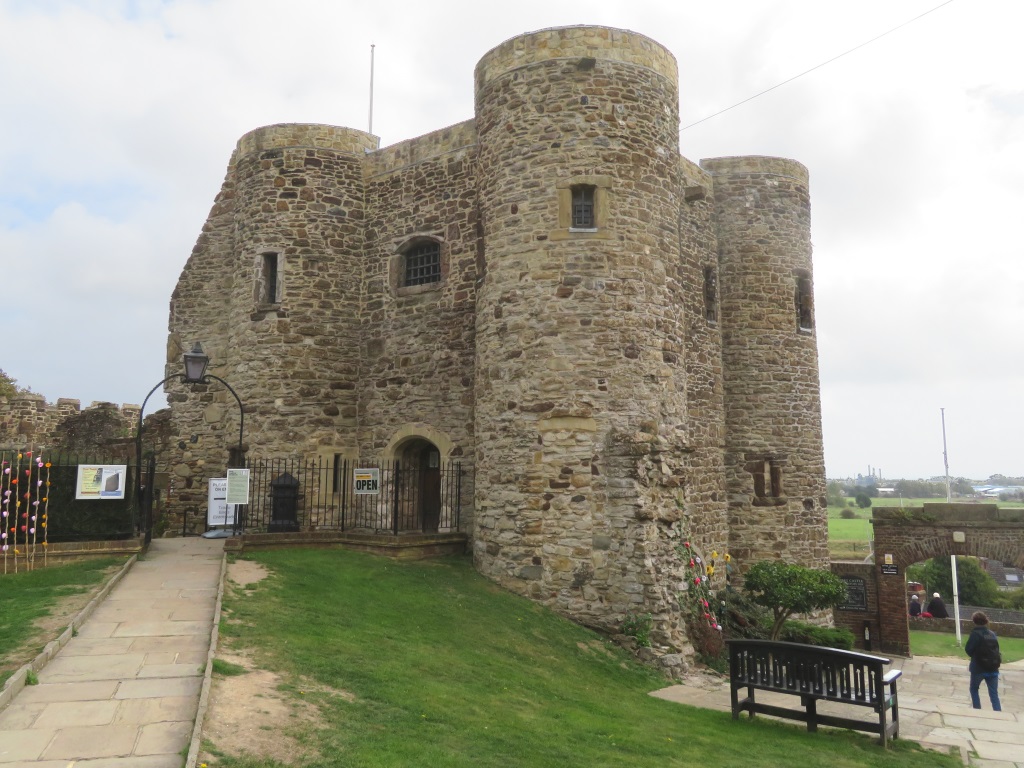 During World War I, the Belgian town and the battle heard the adopted pronunciation of 'Wipers' so you can now ask for directions like a local.

The problem with that, however, is if you were local, Rye isn't all that big and you wouldn't really need to ask for directions.

The tower dates from the same time as the gate, possibly earlier, and doesn't have a Costa™s in the old gaolhouse. But why the need to defend what's largely inaccessible marshland? 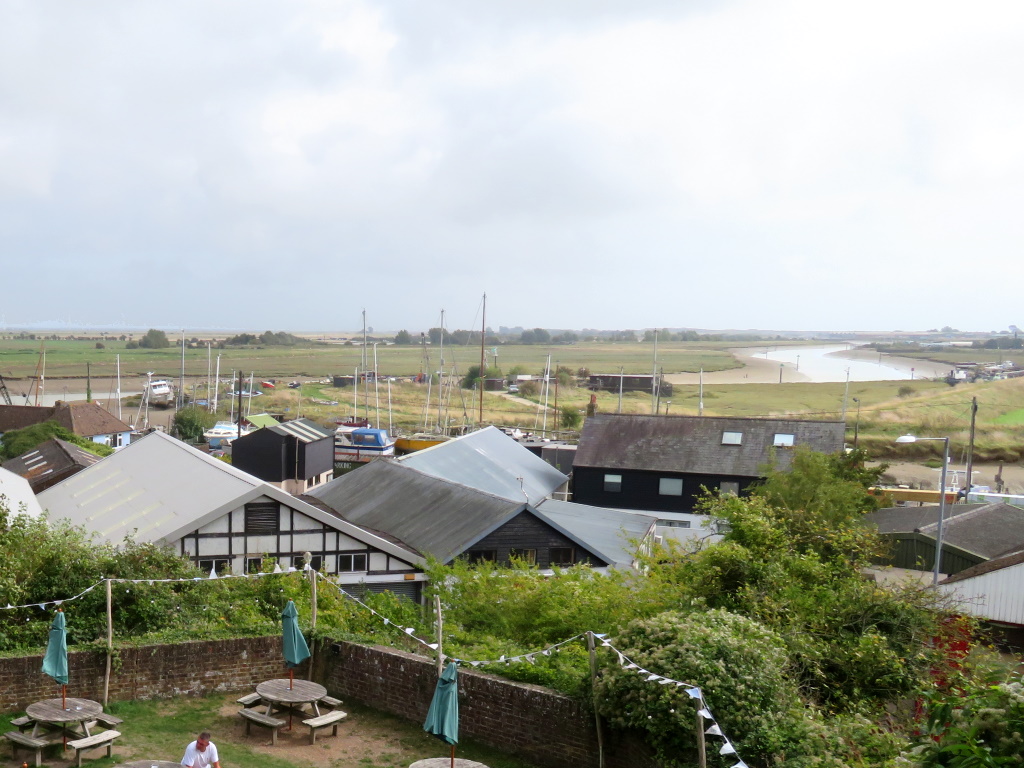 It wasn't always so, this was all once sea, you see, until it retreated and took the harbour with it. 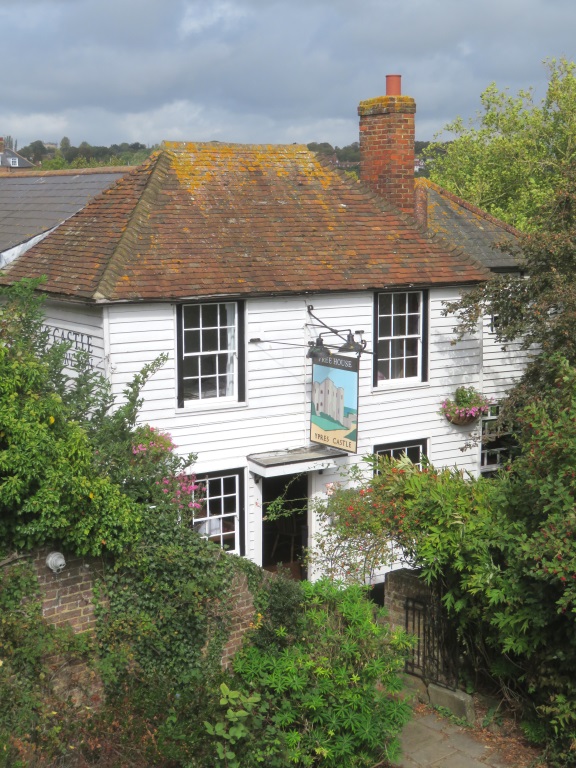 The Old Dairy Brewery's Über Brew is from over the border in Kent and is, quite simply, superb. Not too strong and hopped to the hilt, it's not known nationwide, just yet, but why is this not winning prizes?

Oh! It seems that it is but the Society of Independent Brewers are a bunch of Budweiser™-imbing boneheads. Just the bronze medal!?!

It turns out that Jeff not only owns and runs the best pub in the world, he's from South Shields and his cousin lives 50 yards away from your dad. This is only revealed after a game of chit-chat tennis, each point interrupted by Jeff having to run a busy pub.

One regular remarked at the end 'I thought you were going to end up being brothers.' Quite Rye-markable, indeed.

The entrance fee to the castle has been passed over, thanks, since there's something even older and higher behind. 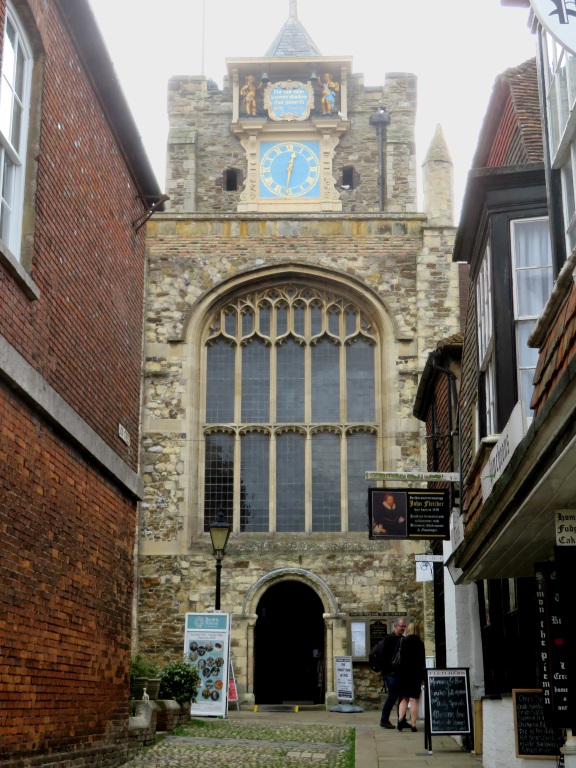 St Mary's Church dates from nearly 200 years before the castle although the clock is more 1561 or shouldn't that be just after 4 o'clock?

It's the oldest, working, turret clock in the UK, they claim, and although the stained glass is more recent, the pendulum can be seen swinging in front of it, in the chancel, or is it one of the Rye-sles? Rye has links to the ancient Cinque Ports[1], a proto-protection racket, really, hence the significance of their church. Not that it stopped the French ransacking in 1377, which meant they had to get the tombolas out for a new roof and a new set of bells.

All of these facts are fine but the most important one, perhaps, is that they'll let you up and inside for a few pounds.

Cinema and café-bar in an old school up a side street near the church. There's a retro-80s season on at the moment with screenings of Rye-ders of the Lost Ark starring Har-Rye-son Ford. 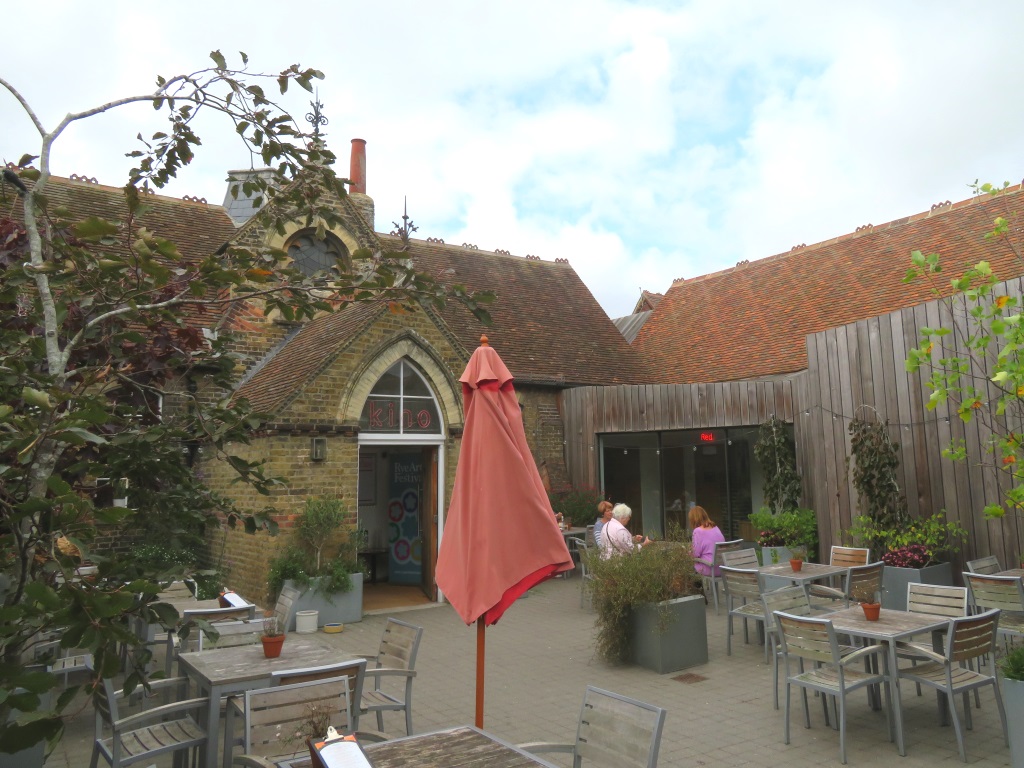 Not really, obviously, but the outdoor seating is welcome while you figure out where you're going to eat.

Something similar to the church's staircase was once set off up in Lucca but a combination of the crowds and the wobblies[1] soon saw to that ascent. A sequence of makeshift stairways here will see you up but you might want to check your timepiece. 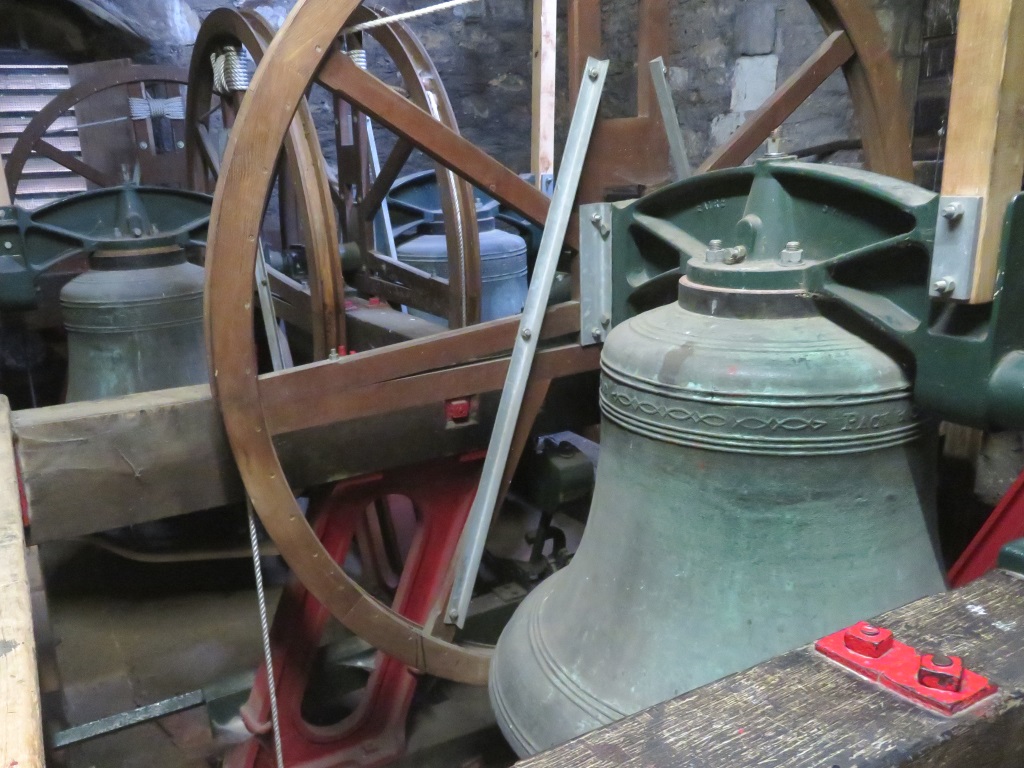 You don't want to be next to these bad boys when they go off. Bong!

You've likely been enticed in by the ornate entrance of this 15th-century boozer. 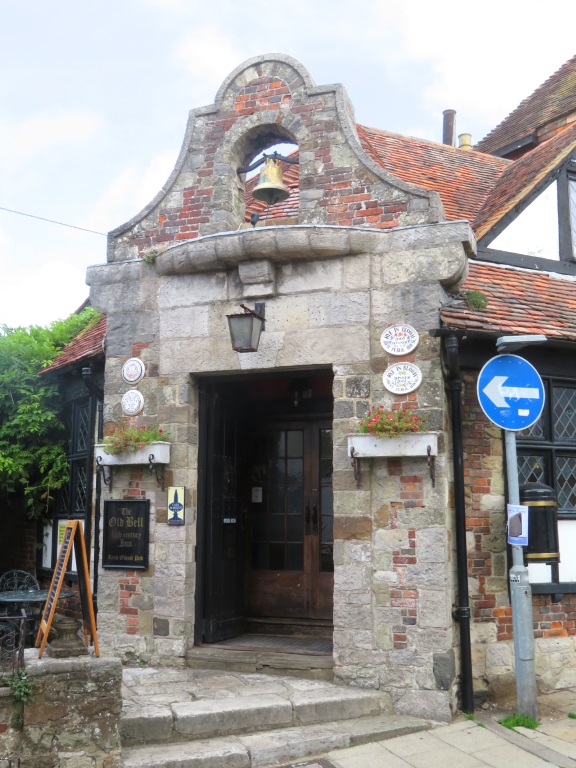 When the French ransacked Rye in 1377, they took the church bells with them so a bunch of lads sailed to France the next year and brought them back. This after setting fire to two of their towns and that's a score unlikely to be seen anytime soon unless it's a friendly, football-wise.

The name's a nod to that event and no, that's not one of the original bells above your head on the way in. No Über Brew in here, neither, but it's handy while you wait for your freshly fried fish from the excellently busy Marino's just down the road.

The 'Cathedral of East Sussex' can be seen from miles around and you can return the compliment from the roof. Not unexpectedly, excellent views for miles around over the town and down towards, what's now, Rye Harbour. 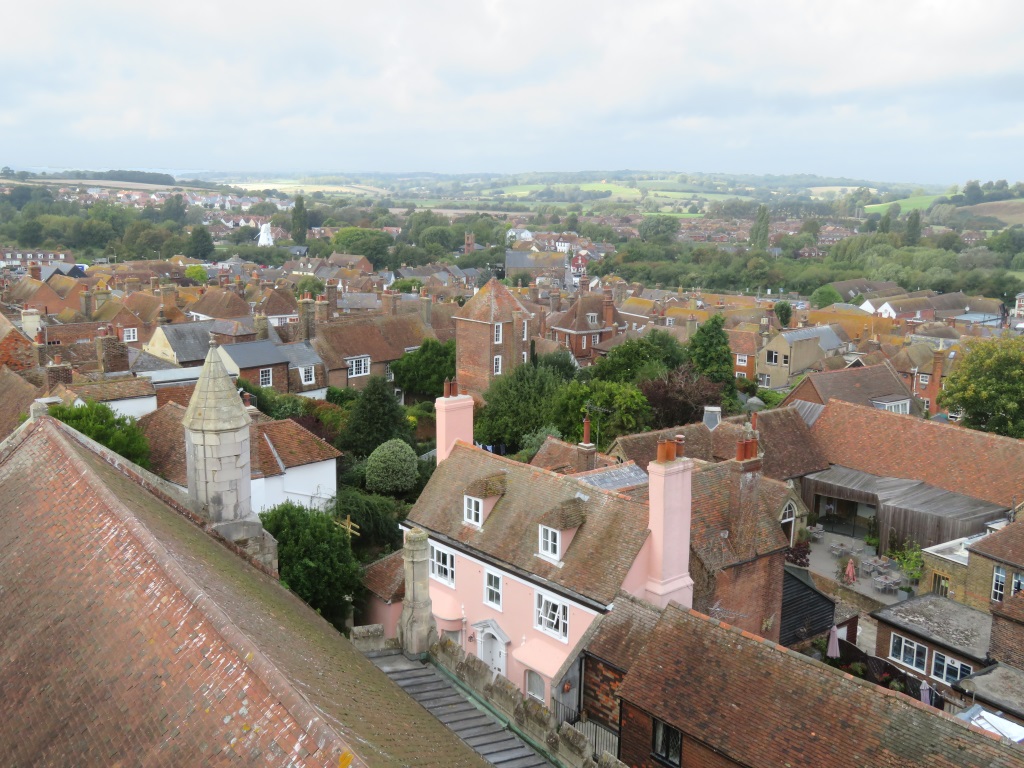 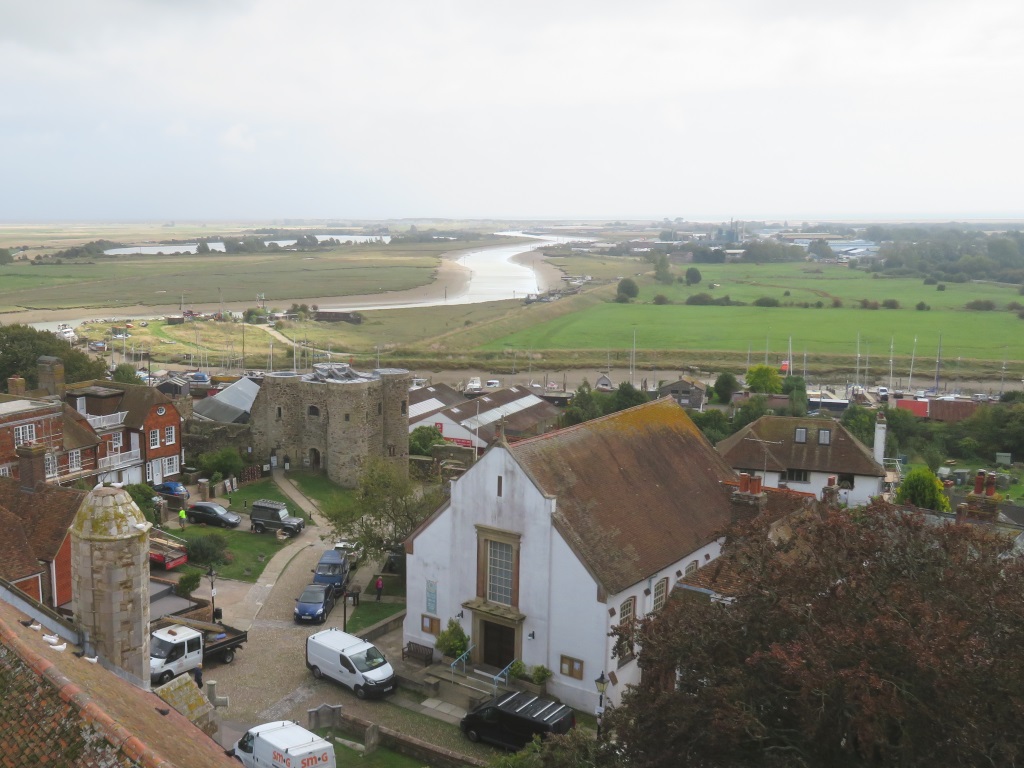 It all makes for some nice Rye candy and, of course, they've not overlooked that opportunity on the high street. 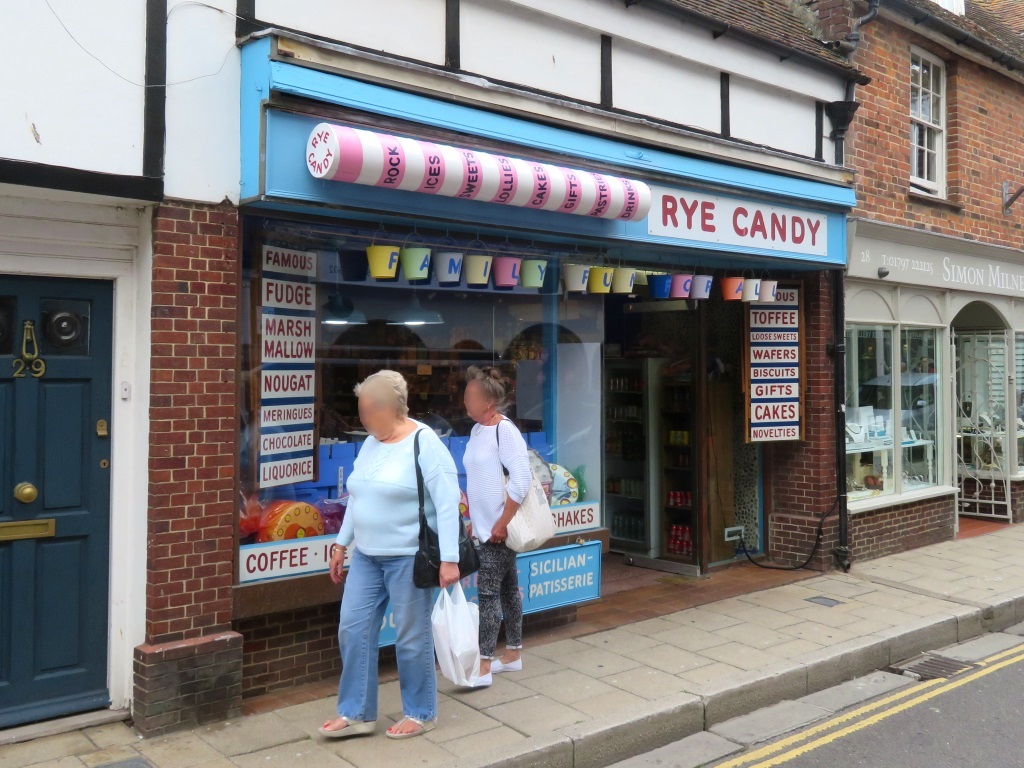 The slightly swankier Mahdi Lounge opened to cope with the demand at their sister restaurant Mahdi Spice. There needs to be a third one tonight, it's the final evening of the annual Rye Arts Festival, you see, and there isn't a table in town to be had.

See you later in the week, then, when there were no complaints. In either, actually.

It's all a mesmerising mooch, much more so than most places, and there's a temptation to simply list the architectural and historical highlights. There are plenty of other resources available elsewhere, those ones compiled with considerable more care and accuracy, but let's give it a go anyway...

There's a 14th-century plank, once part of a prison door and now put to work to prevent access to a back garden. 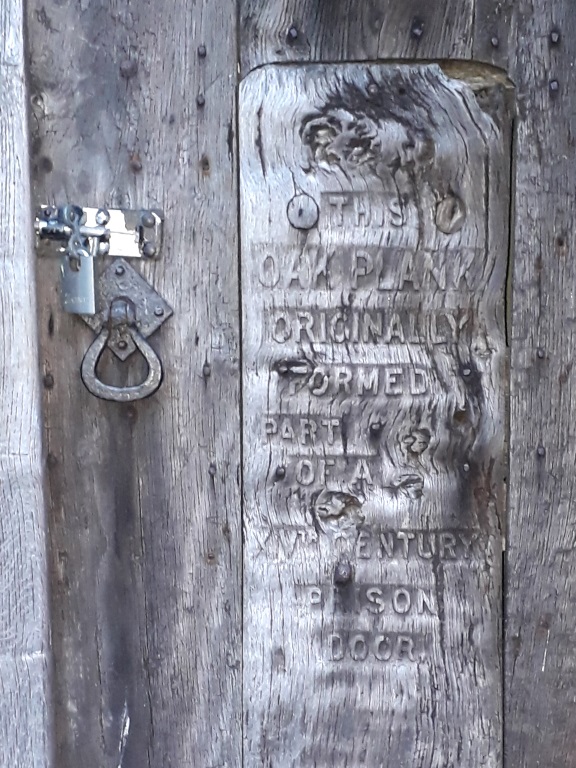 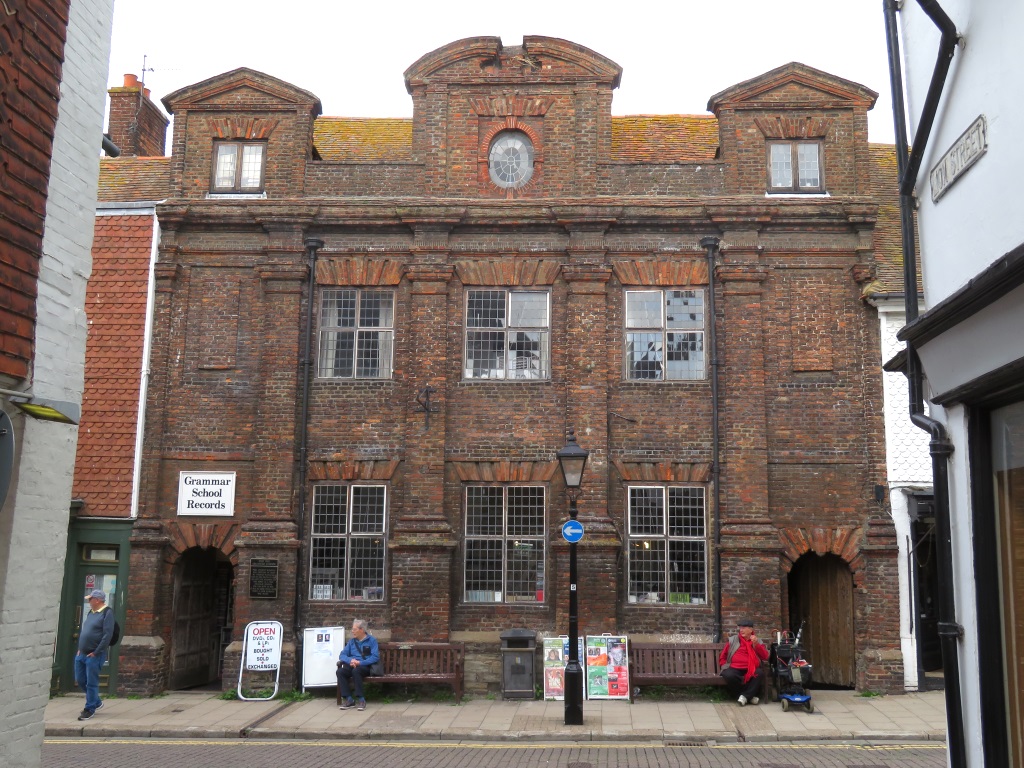 The old Grammar School dates from 1636 but CDs and vinyl are the only musical 'spinets' in what's now a record store.

Henry James, one of literature's greats, some say, lived in Lamb House, a striking Georgian mansion. The acclaimed author penned some of his best work here including The Rye-verberator, The Outc-Rye and The Eu-Rye-peans. 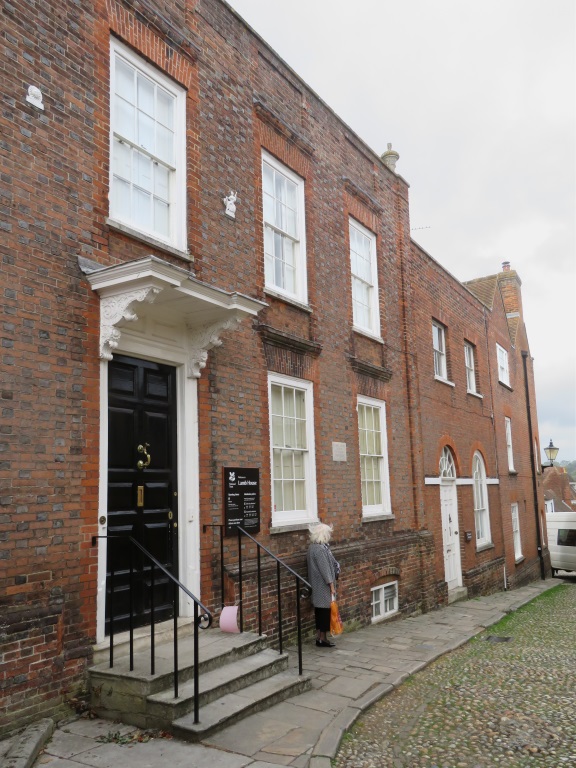 Admittedly, that's not SlyBob's best work but the shops have already pinched the best puns.

Down on the flat, things are slightly more serviceable but with the old-fashioned feel still intact. 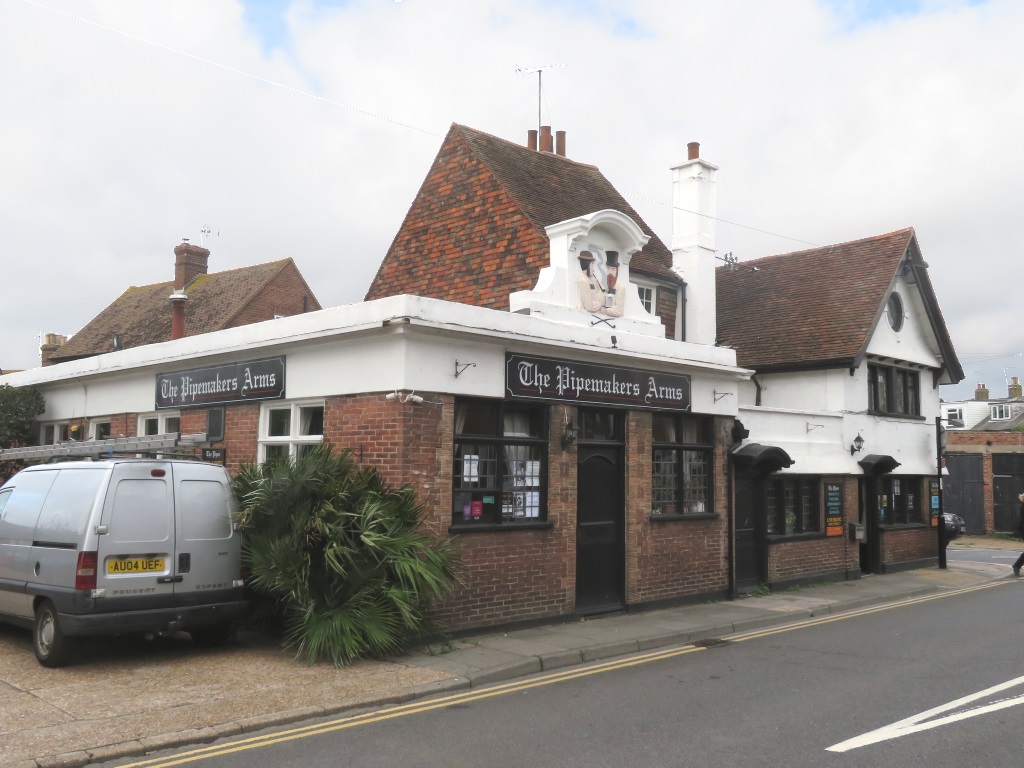 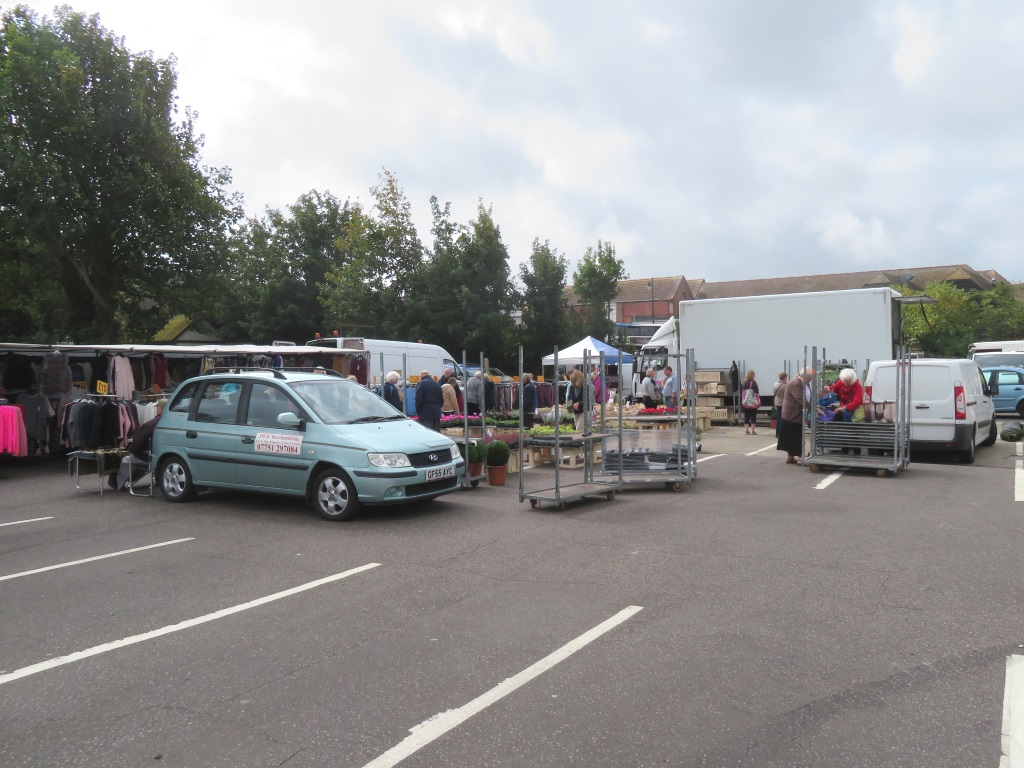 The Thursday market cuts the available car parking in half but gets the coachloads in and keeps the cafés happy.

There's nothing in here that's brewed from more than 20 miles away and they'll pour your cider straight from the flagon. Grub is very much of the Scotch egg variety to go with, get this, a green-hopped ale.

It's known in this house as wet-hopped, despite never having tried it, but whatever the terminology, it's a bit of a thing around Kent.

It's only available for about two weeks after the hop harvest when they pop 'em in whole rather than drying them out to use all next year. If slightly oily beer isn't your thing, they've also got Über Brew on and they were both supping superb.

It's lucky, then, that this is not long after their opening following protracted planning applications to operate out of the listed building that once housed the town's water pump. With this and the Ypres Castle's offerings and hospitality, it's wondered why the other dozen-or-so pubs in Rye even bother, Rye even bother?

Things happened fairly early here railway-wise and it's been bringing other kinds of coachloads in since 1851. Not that many would have alighted here, however, the line served Hastings, Eastbourne and Brighton and Rye simply happened to be in the way. 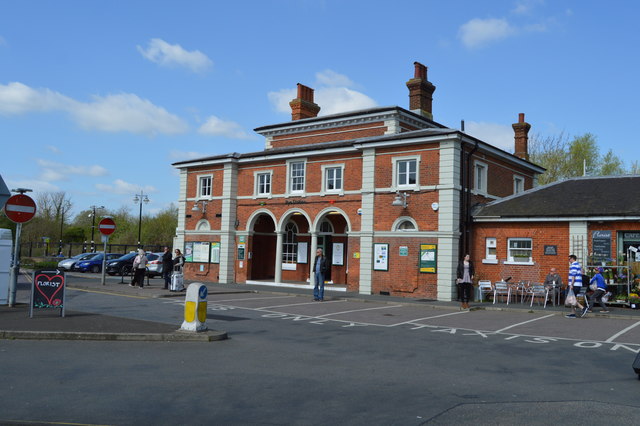 It's managed to escape the axe several times, including so-called 'Dr'  Beeching and the original station was still lit by gas in the 1970s.

It's just over an hour to London on a good run but unlike everything else in Rye, there's nothing heritage here. That means, just for once, the choo-choos aren't following you around and Hythe will have to be headed to for that.

The high street leads down to the Strand or the quay or the harbour if you'd rather. This was all once on a bay but a succession of storms in the 13th century changed the course of the River Rother and it's been filling up with shingle ever since. 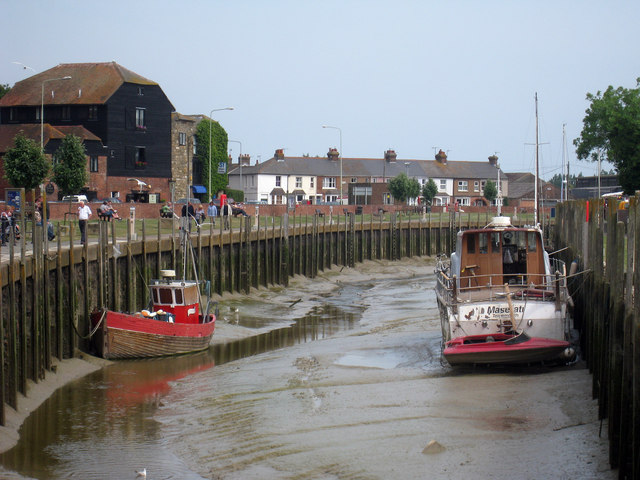 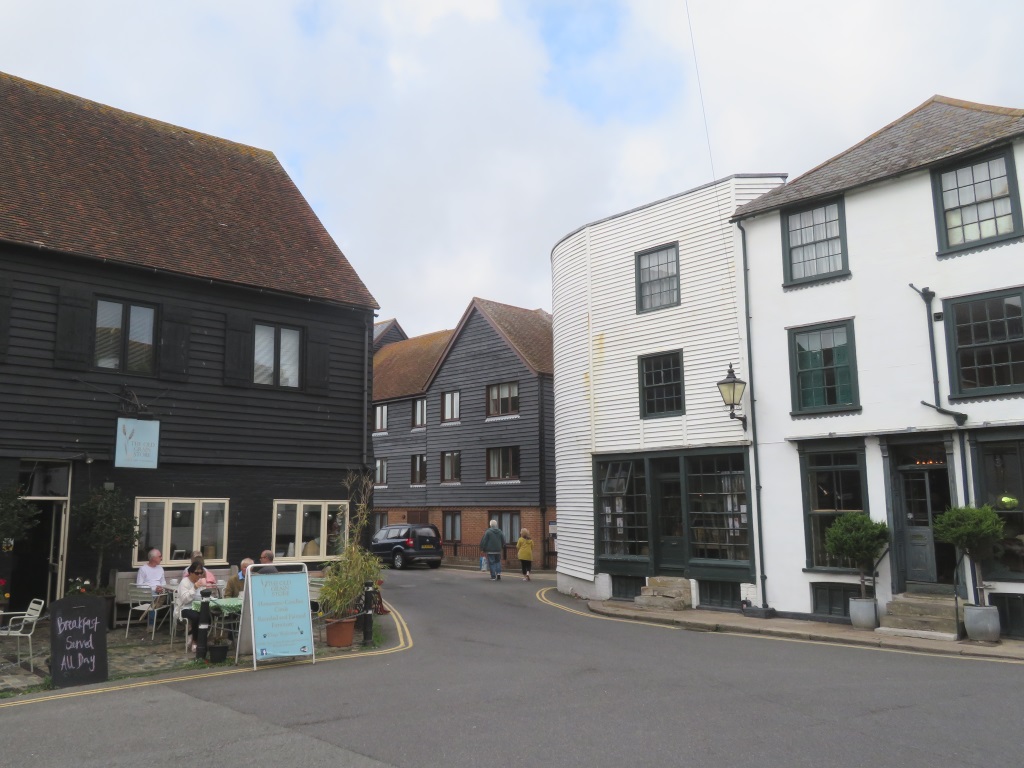 It's nearly two miles to the shoreline now and it's thought this is roughly where the harbour would have been. The only things being unloaded these days, though, are coffee, antiques and the planks of tarred weatherboard that are typical in these parts.

This largely modernised stretch adds a different dimension to town and if you're in the area makes Rye-more reason to visit East Sussex.

That just about exhausts all possible puns but the 1066 Country Tourist Board can still have that one for free.

All your familiar favourites in what's not quite as old-skool as anticipated. There's a bit of a wait and a bit of confusion with the surname but between the respective Geordie and Sicilian twangs, both parties are happy that Mr 'Handy' is close enough.

7-45 PM it is, then, and the Ship Inn next door is also handy while you wait but be warned, that's also an Über Brewless joint.

Meanwhile, back at Simply Italian, 'Are you Handy?' Well, I do live just around the corner[1]! All but that very last bit is true and that name's now being used whenever a restaurant reservation is made, like a right little pair of Jay Rayners.