Wetherspoon™s - The Muckle Cross : The medieval monument that's at the heart of Elgin (2/5).

Of course SlyBob's not lost their marbles, nearby Nairn is being knocked around in so a first foray into Moray could hardly be considered crazy. Very elegant is Elgin, they say, although it's not a great first impression parked up at the Sports and Community Centre that's a bit of a '60s eyesore, not shown.

Things perk up, however, in Cooper Park, Elgin's primary piece of greenery that leads down to the old cathedral and you're talking 1224 old. 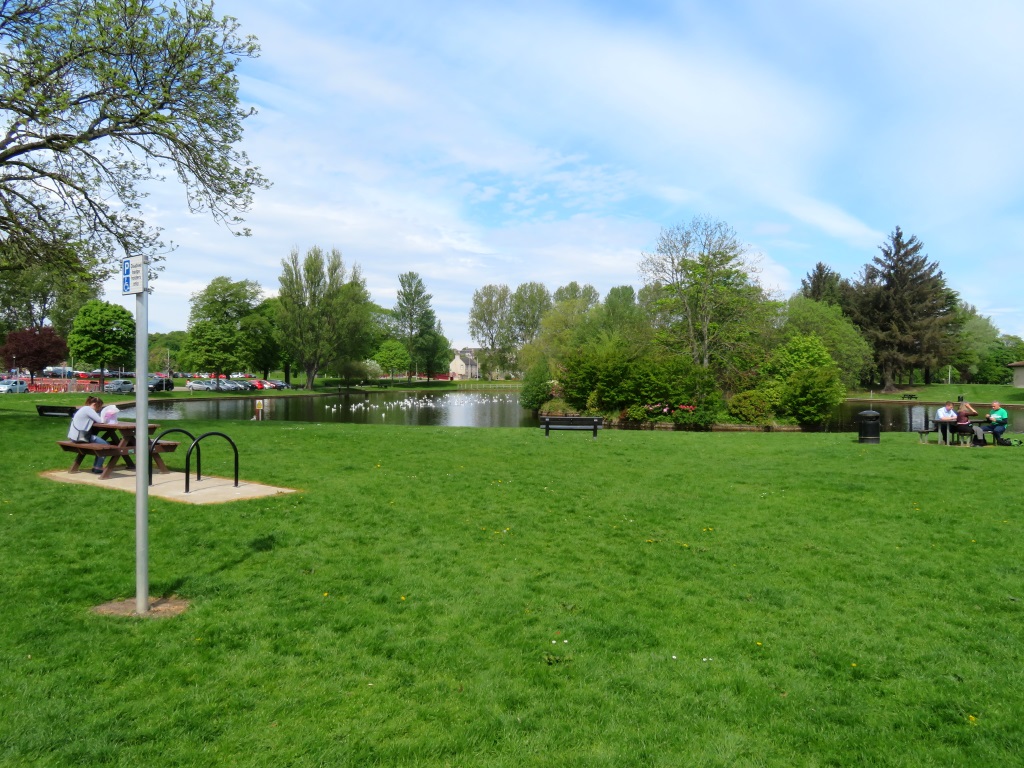 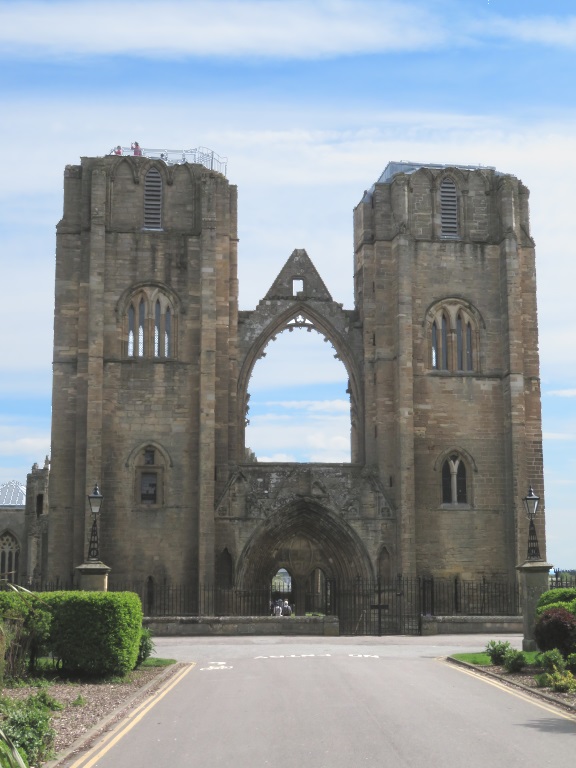 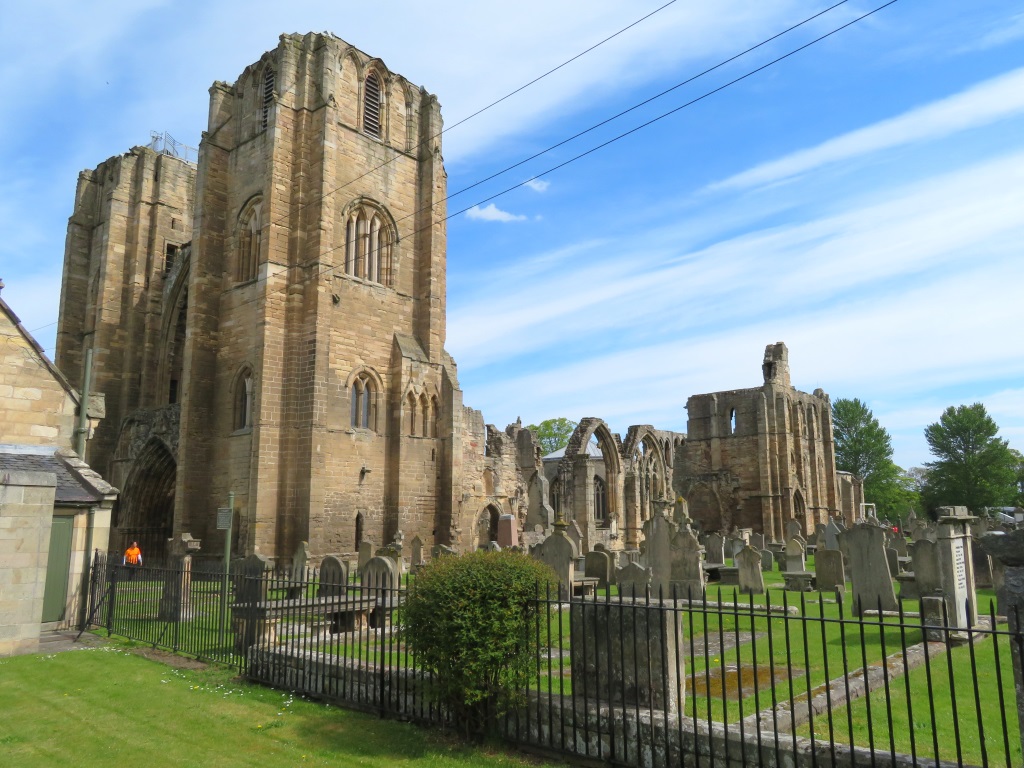 Historic Environment Scotland™ will let you inside and up for £7-50 a pop but disinterested skinflints can cop enough of a peek for free.

Just like absolutely anywhere else in the UK, Elgin was transformed in the early 19th century. They paved over the open, medieval drains and rebuilt St Giles' Church, which also caused a right stink at the time, apparently. 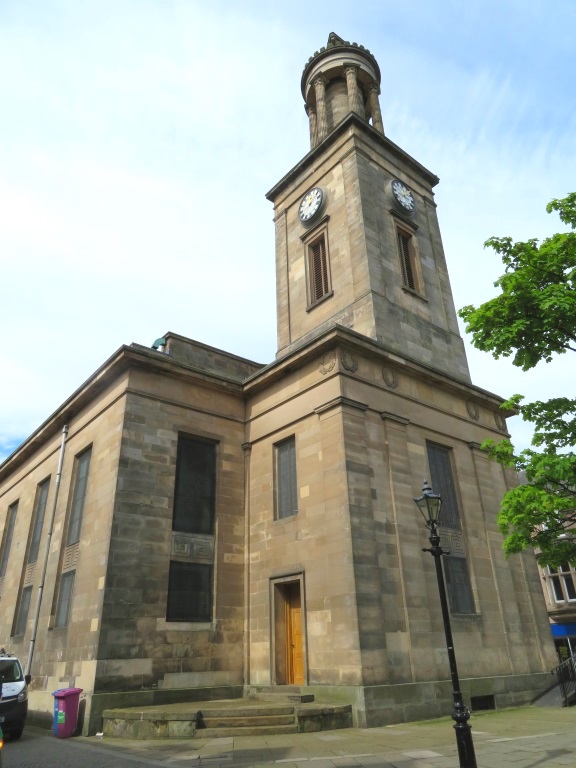 This broad part of the high street also boasts an impressive war memorial and fountain even if that means this is reduced to just showing you some snaps, for now. 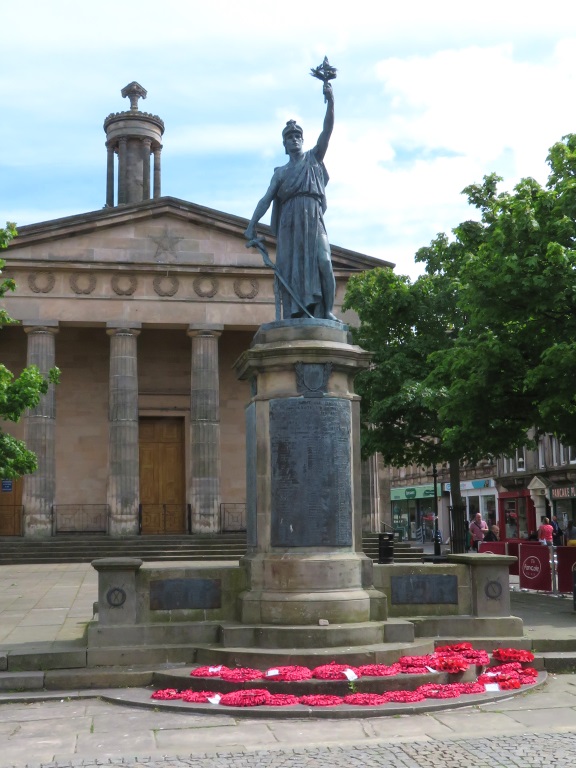 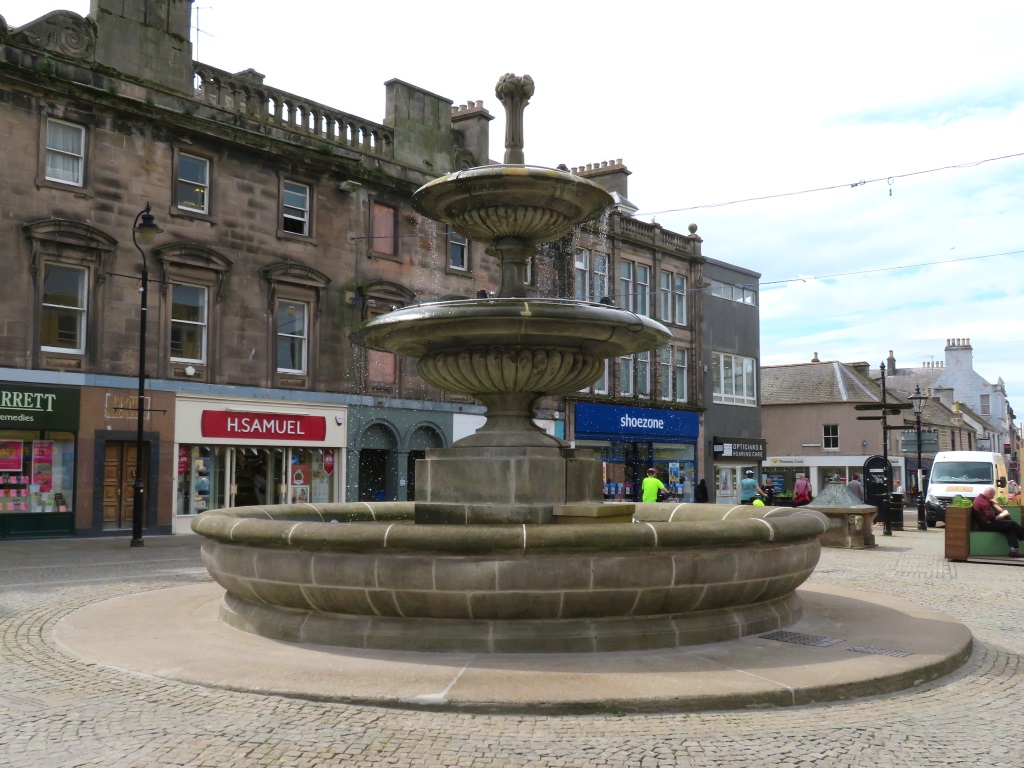 Away from the monuments, Elgin's high street is best described as, erm, functional with the usual suspects of familiar chains and the odd independent that didn't quite make it.

If you're needing some discount home-goods, however, this is the pick of the low-priced, plastic providers, probably. 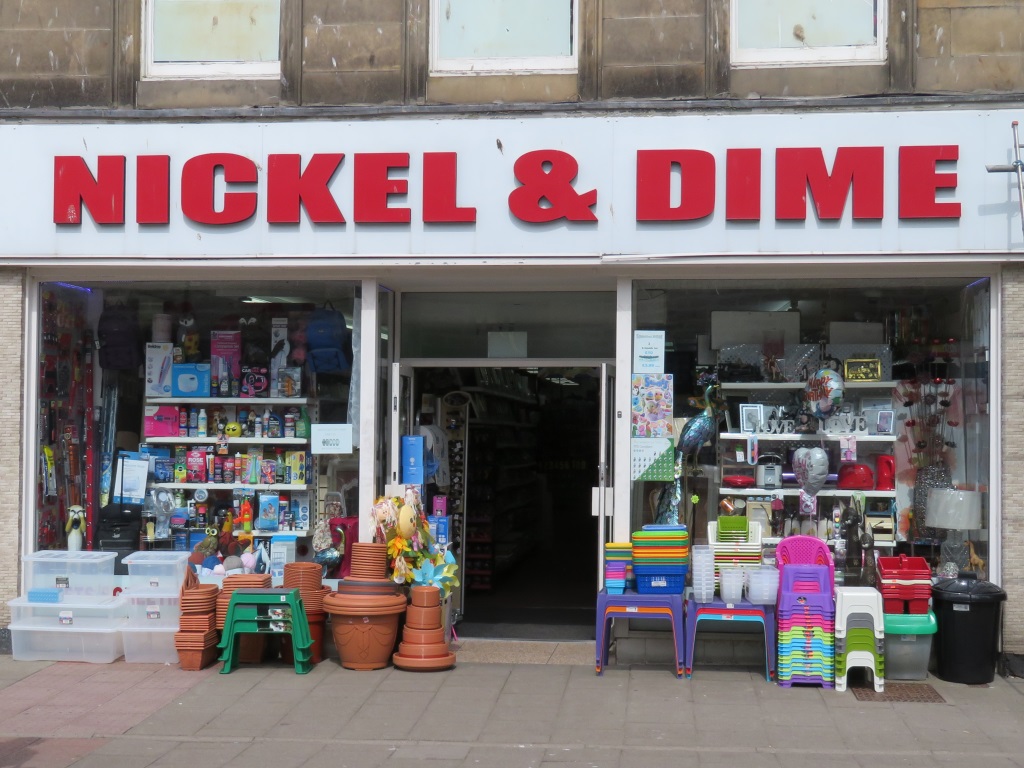 It's definitely a thing up here because they've already been noticed in Nairn[1] but the name is, quite frankly, unfathomable.

How about something a little more 'on brand'... MacPlastic™s? Macca's Placcas?

[1] Now known to be every other town north of Perth, actually, and not that they've become something of an obsession, honestly.

There's a busker opposite the fountain banging out some bossa nova beats that are better than the ones in Brazil, nearly. 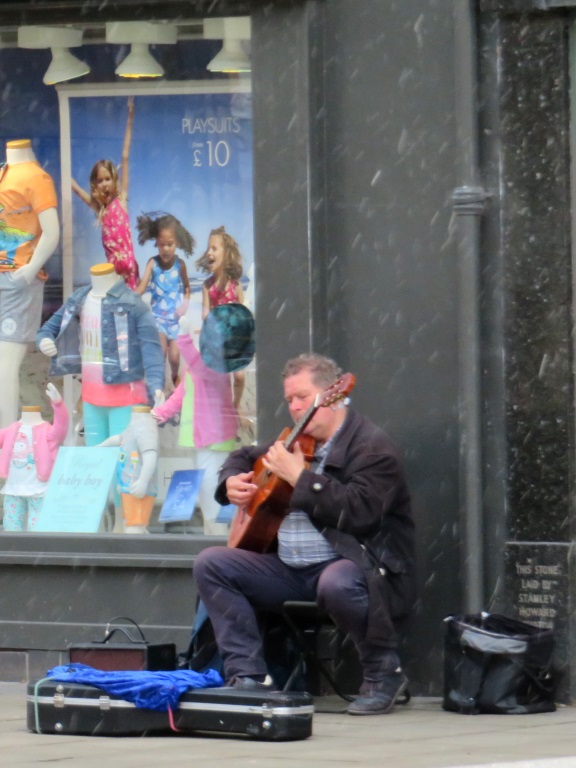 With the sun now out, today has a continental feel and there's a muckle load of change being tossed into his hat.

That's the same muckle that many a mickle makes with muckle meaning big or a large amount but so does the interchangeable mickle. 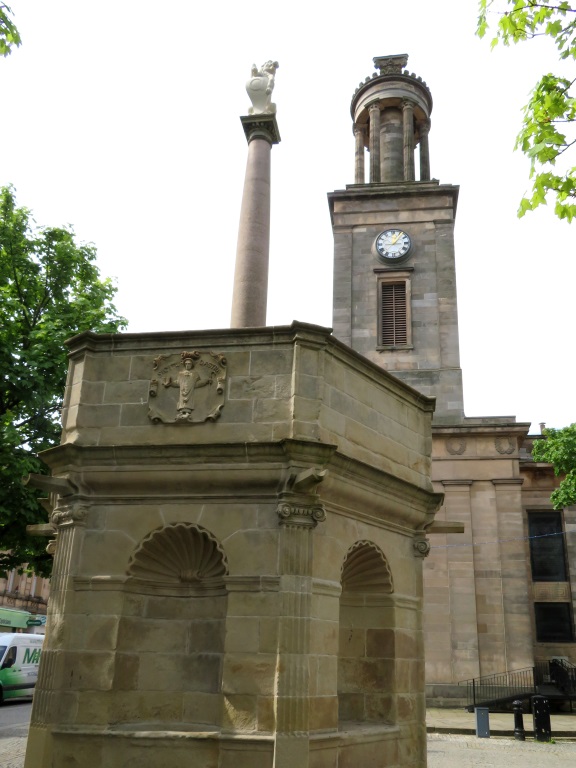 There was a cross here dating from the 14th century, they say, although it's not known how muckle it was and those Victorian developers replaced it with a lion, obviously.

This is not long after the recent unveiling of an identical-looking Leo only this one's not covered in nearly 200 years of soot, just yet.

Wetherspoon™s didn't show muckle imagination, they just nicked the name from 100 yards up the road so the Director of Contrived Waterhole Naming gets a generous (2/5) for that. 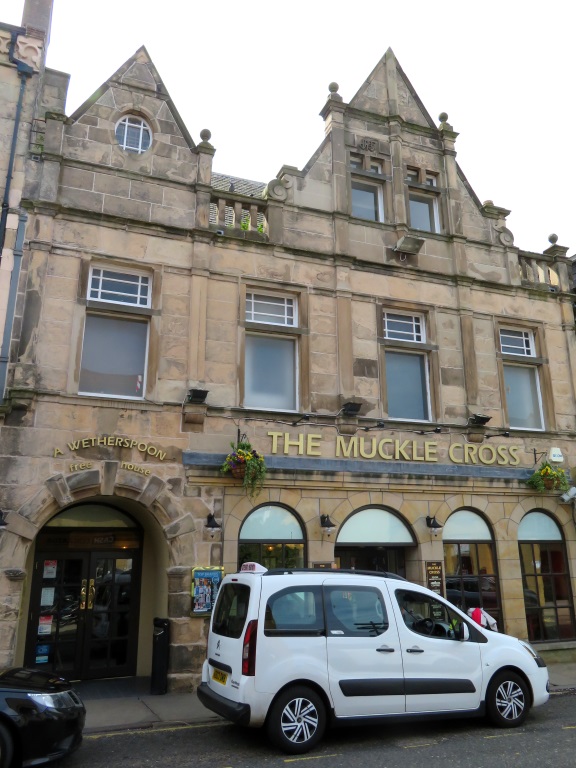 It's just down from Elgin Sheriff Court, as they still call him up here, so they might be guilty of catering to a rough crowd of supporters some days.

South street runs parallel and below the high street and, monuments aside, provides Elgin with a little bit more of an identity. The rents are presumably cheaper than up on high, so Elgin's chain-free merchants are better represented.

That includes everybody's favourite, the independent bookshop even if the Guardian™-reading tightwads in these places never actually seem to be buying anything. 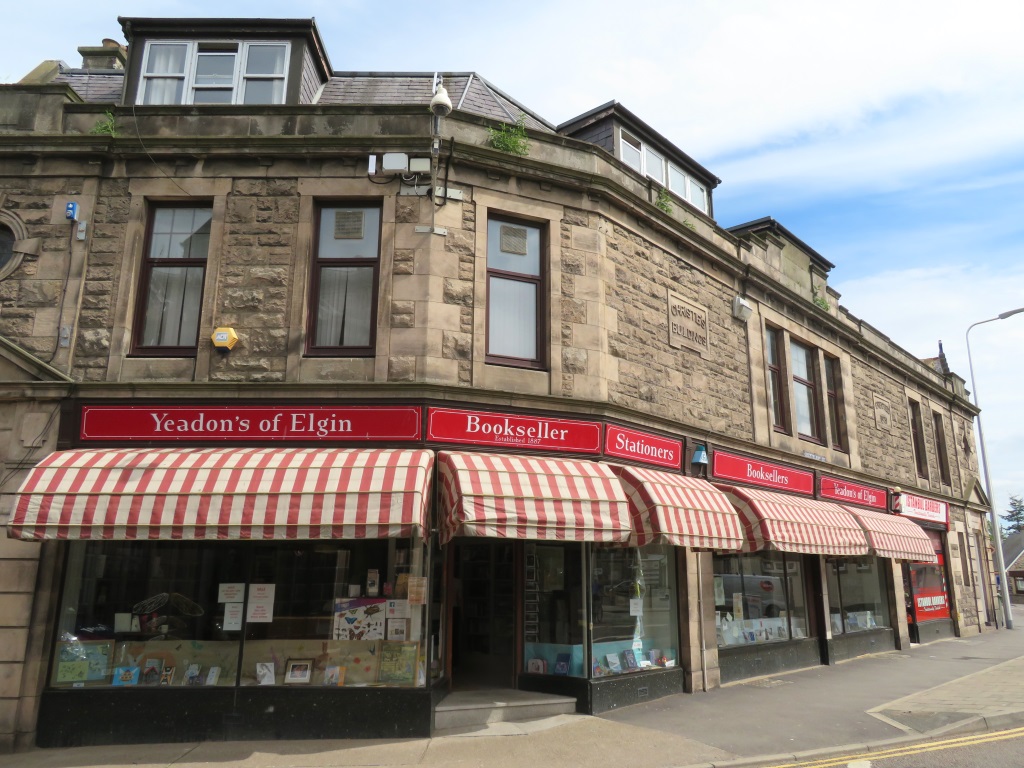 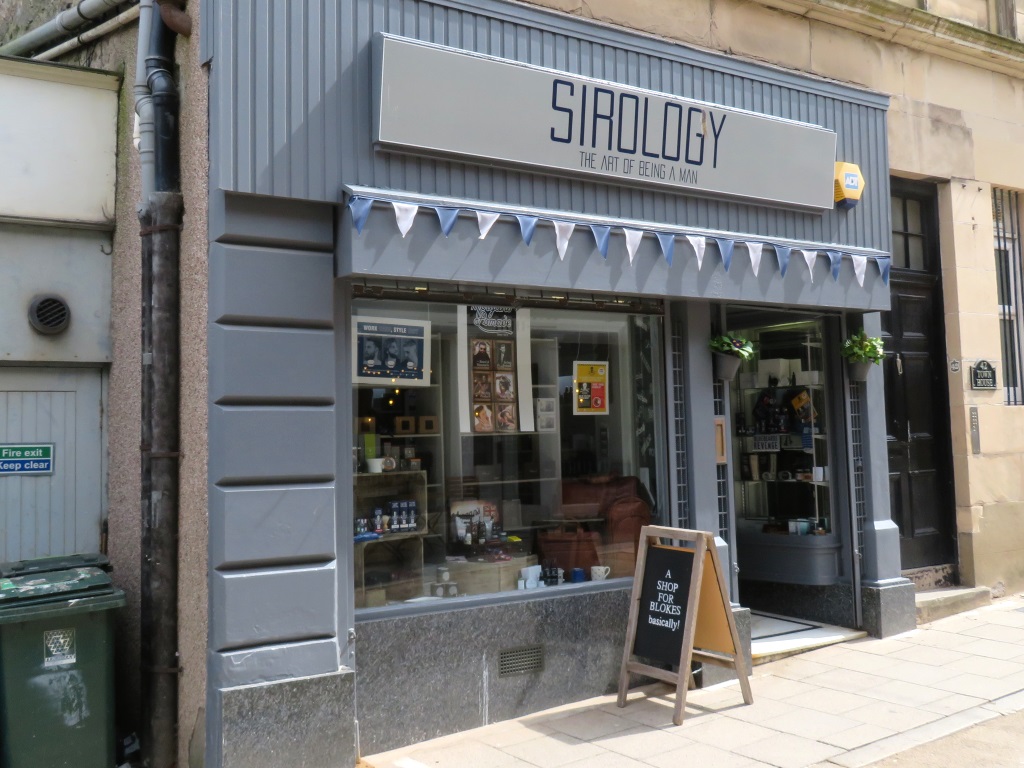 Sly will have to entertain herself for the next hour since Sirology is © 'A SHOP FOR BLOKES basically!' Unfortunately, they don't do pies or old football stickers so not too much time will be spent in here unless you're a particularly well-groomed individual.

For fans of the uisge beatha, Gordon & MacPhail are serious suppliers of single malt Scotch whiskies, especially those from Speyside. 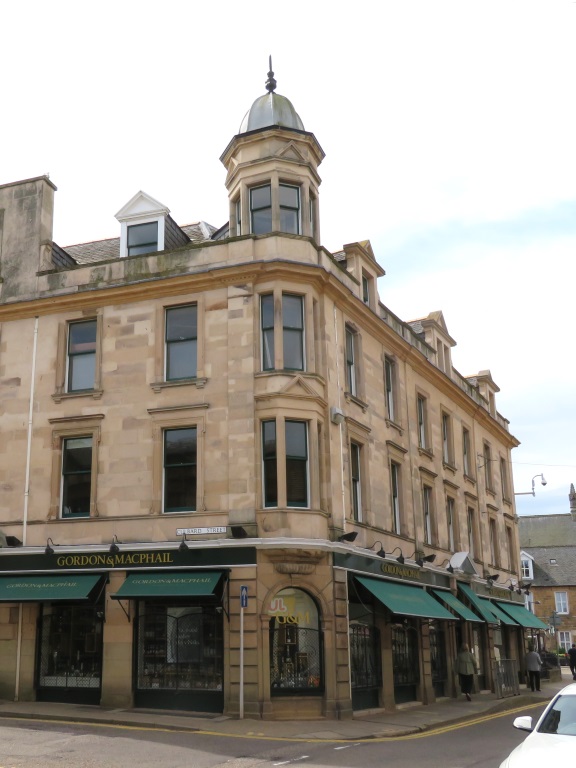 They even do their own blending in a purpose-built plant near the big Tesco™s but if Balblair or Benromach don't ring any Bells with you, then you've no right being in here.

There's a strange-looking symbol been instilled on the brown road signs around these parts and, what's now known not to be a yurt, marks the Malt Whisky Trail.

There are nine locations in all, most of them working distilleries, and doesn't that make a great day out for the designated driver?

The west end of the high street leads to a pair of war veterans' cottages behind which there's something much more significant, monument-wise. 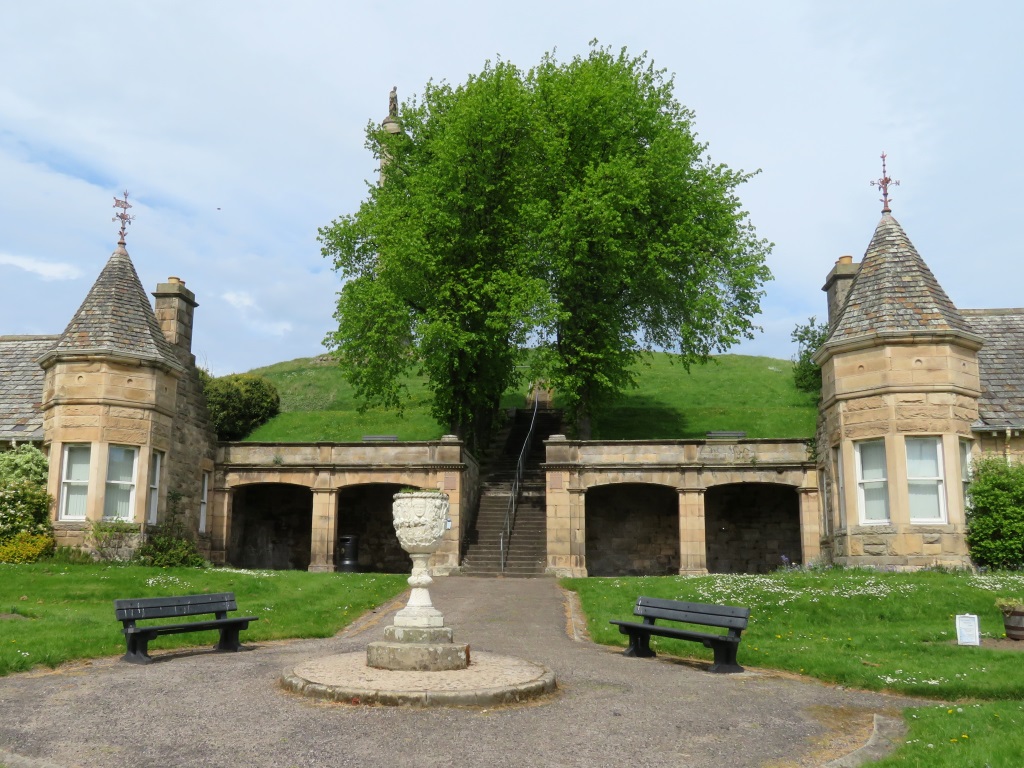 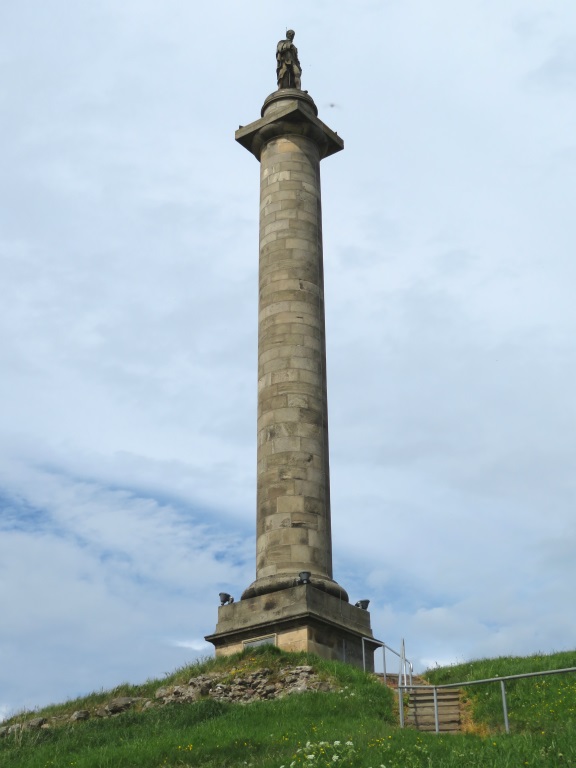 It's an 1850 tribute to the fifth Duke of Gordon, whoever he was, and the end of the line for this Aberdeenshire clan.

He's got good views from the top of Ladyhill down to town and the big Tesco™s and it's all on the site of Elgin Castle. 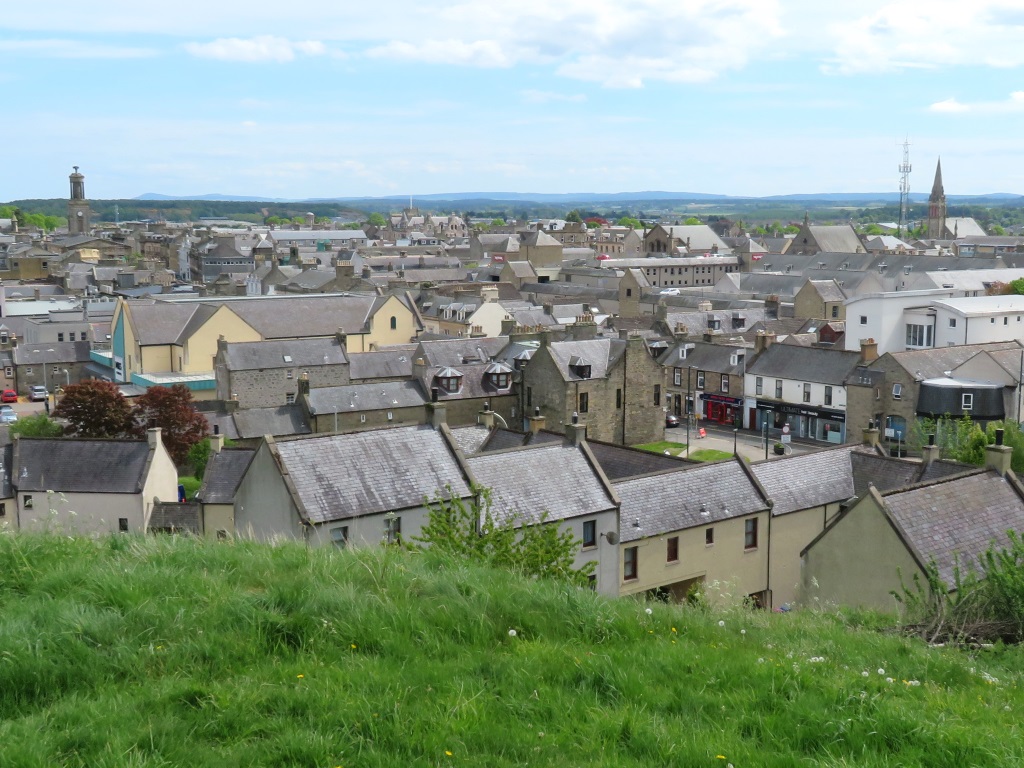 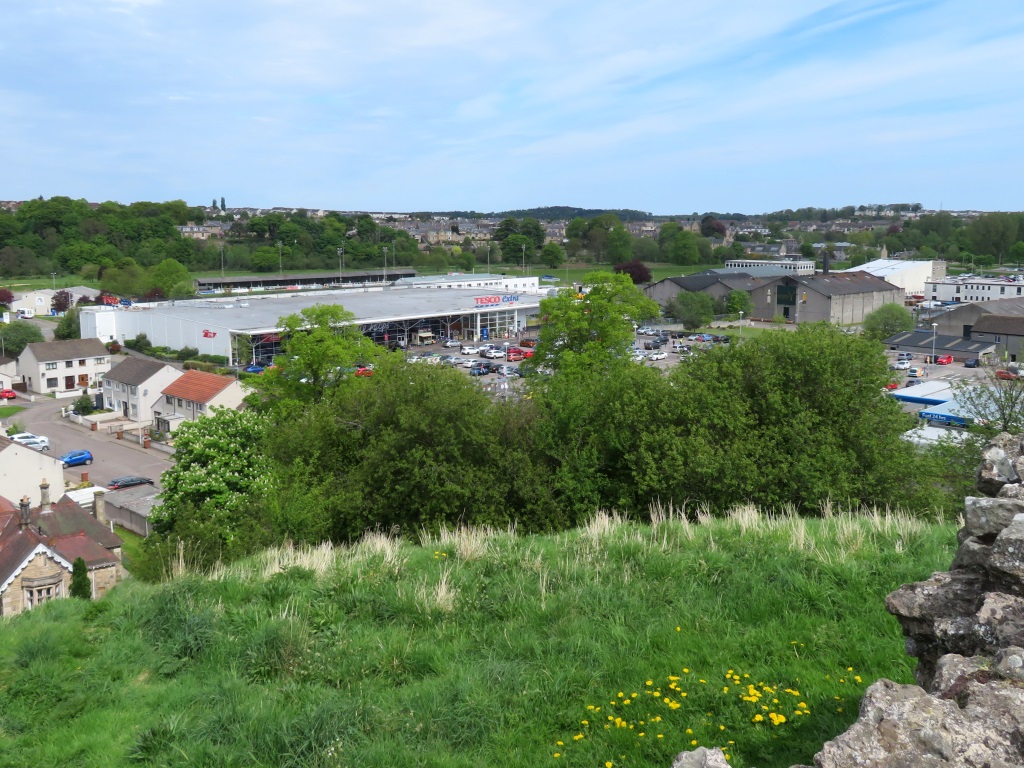 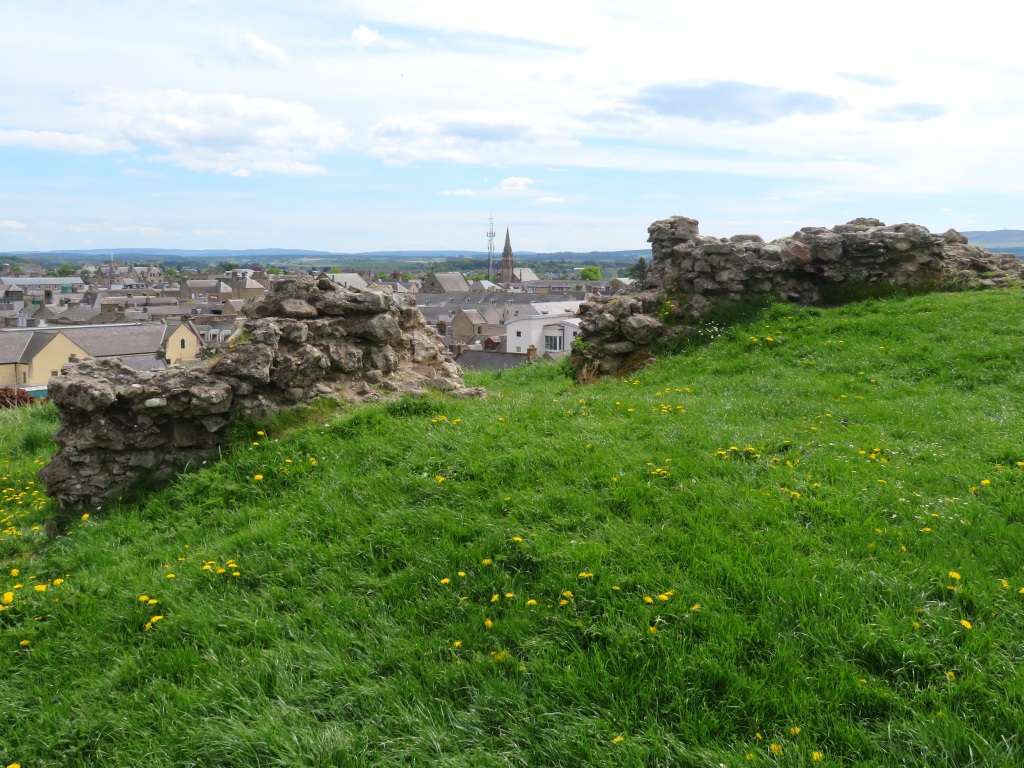 Classic motte and bailey, of course, but after it was ransacked in 1308 it was never rebuilt and the ruins remain.

With the Dukes of Gordon gone, the mantle of leading, local dignitary was taken by Lord Rockingham. That's the same Lord Rockingham, AKA Elgin-born Harry Robertson, who topped the charts of pop back in 1958 with his hilarious hit  Hoots Mon where, among other things,... 'There's a moose! Loose! Aboot this hoose!'

Unlike Mel Gibson, he wasn't an overt racist, it was just a playful take on his native Scots dialect but, along with Oor Wullie, is responsible for every bad impression of a Scotsman ever heard.

Just like Mel Gibson, then, who, by the sound of things, used them both as homework for his part in  Braveheart.