Amble is the first place of interest, with a population, on your way up the South Northumberland coast. Saying that, what about Blyth or Newbiggin-by-the-Sea or Cresswell?...

Amble is the first place of interest, with a population, on your way up the South Northumberland coast. Too small to be thought of as a port and never deep enough for a dock, the fishing fleet has always been fairly so-so and that boat repair yard simply functional.

That was reflected in the town, which while always welcoming was a bit underwhelming. Queen Street serviced the needs of the locals over any visitors but that was all before the explosion. The explosion? The epicurean[1] explosion of the mid-2010s! There's still a bookies and a barbers along here but there's an artisan bakery and a cookery school now, not to mention what's going on down at the harbour.

[1] It sort of means food and yes, the spelling and the meaning had to be double-checked.

Slightly misleading in that the purpose-built block at the bottom of Queen Street used to fill you in on all things local but it's a micropub now filling you up with local beer and cheese. More regeneration outside and the sundial sculpture is accurate to 15 minutes, they say, which will come in handy when they start charging for the parking.

On a previous visit and at the harbour, there was a car boot sale, of sorts, where you could buy 100 metres of tin foil, one of the few commodities that's actually quicker to run than unravel. 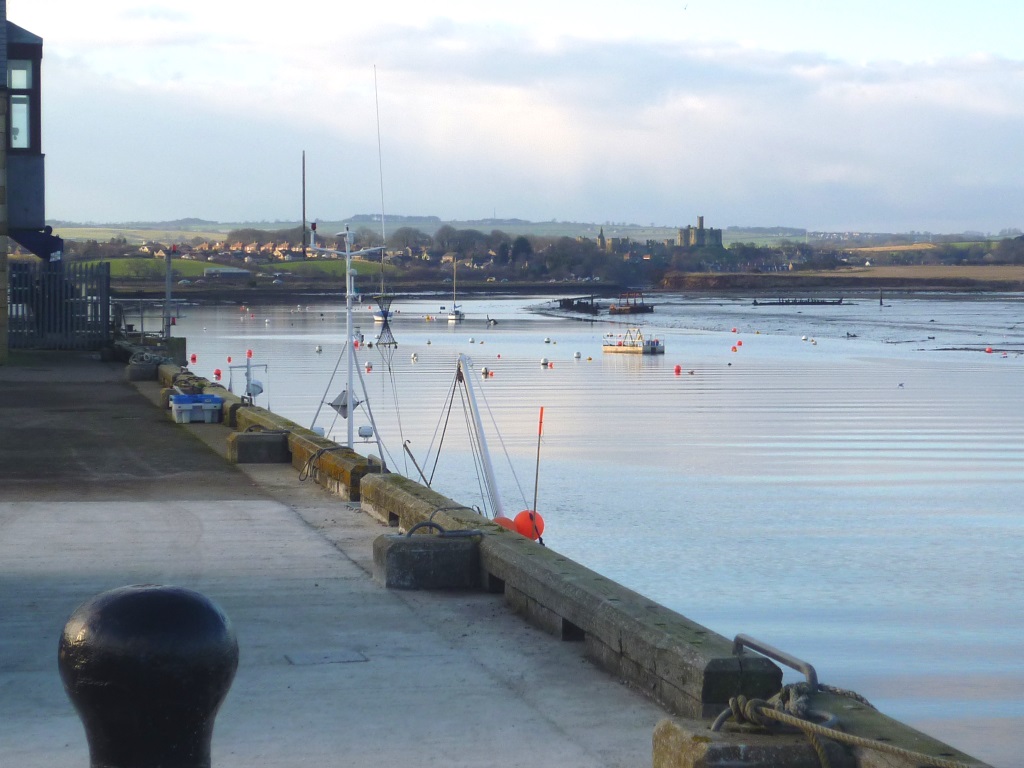 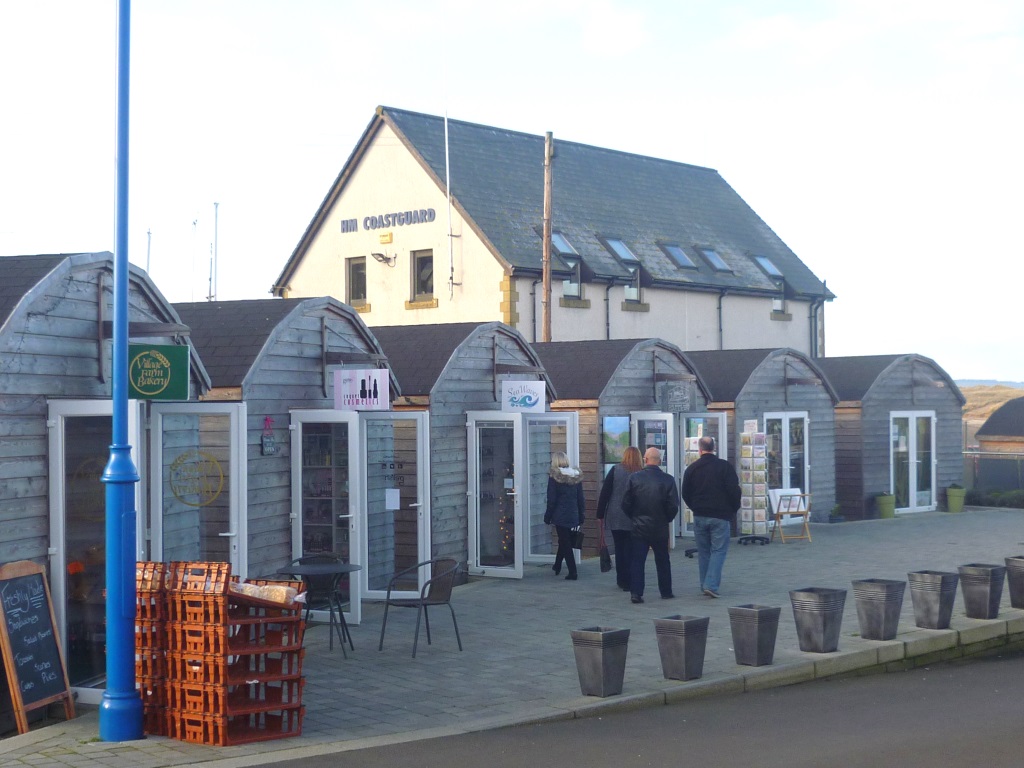 It's now been transformed into Amble Harbour Village, a Rural Enterprise-funded operation that brings a slight downside to being a destination for expectant diners.

While it's a thumbs-up to the seasonal, retail 'pods' selling local nosh, it looks like Sly is slightly more of a fan of those peddling hand-crafted jewellery and maritime-themed knick-knacks.

The car boot's still here on a Sunday but Amble is now, officially, that kind of a place.

Part of the group that runs the Old Boathouse bistro nearby and that cookery school but what's this with the fish and chips? Creamed peas? This wooden hut might make Amble Harbour now look like San Francisco but do they think it's Thanksgiving? Creamed peas? 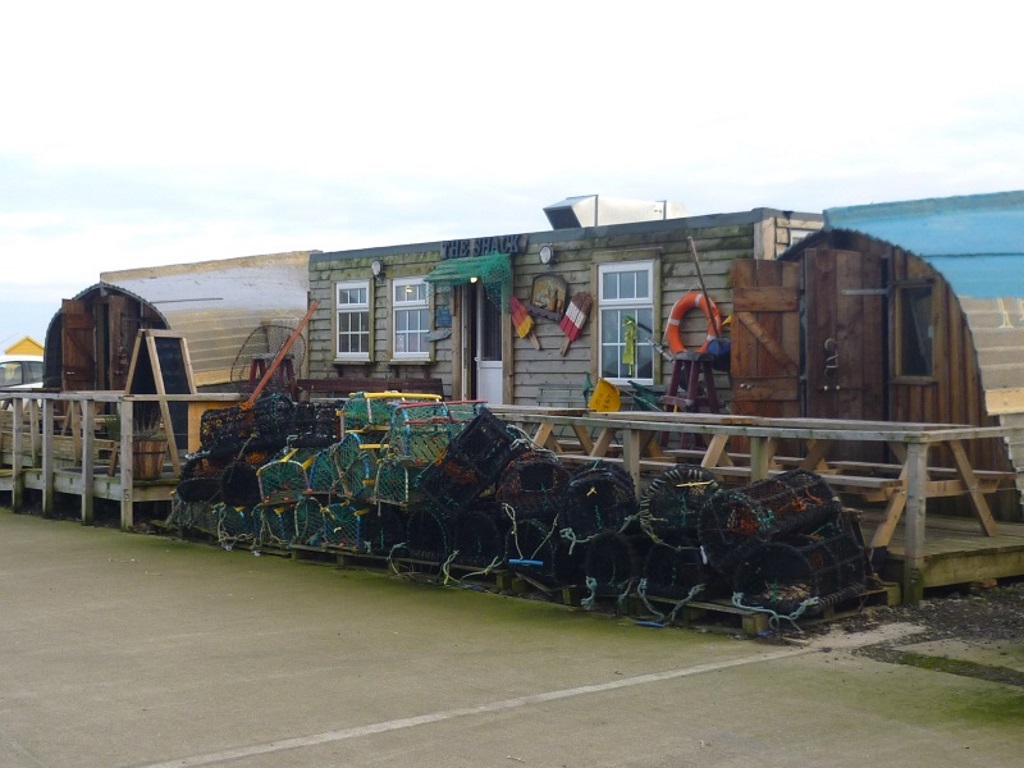 Sweet and not too, well, creamy, that's a bold substitution for the salty of the mushy. These were the best since Saltburn and creamed is the only way SlyBob now take their peas.

Opened by 'Big' Jack Charlton, RIP, in 2016, the menu, however, has since reverted and SlyBob are now thinking did they dream the Creamed peas?

This once uninviting establishment was always no frills and no food but with free Wi-Fi although, even then, that was a bit like a Blackpool guest house still advertising hot water in every room. 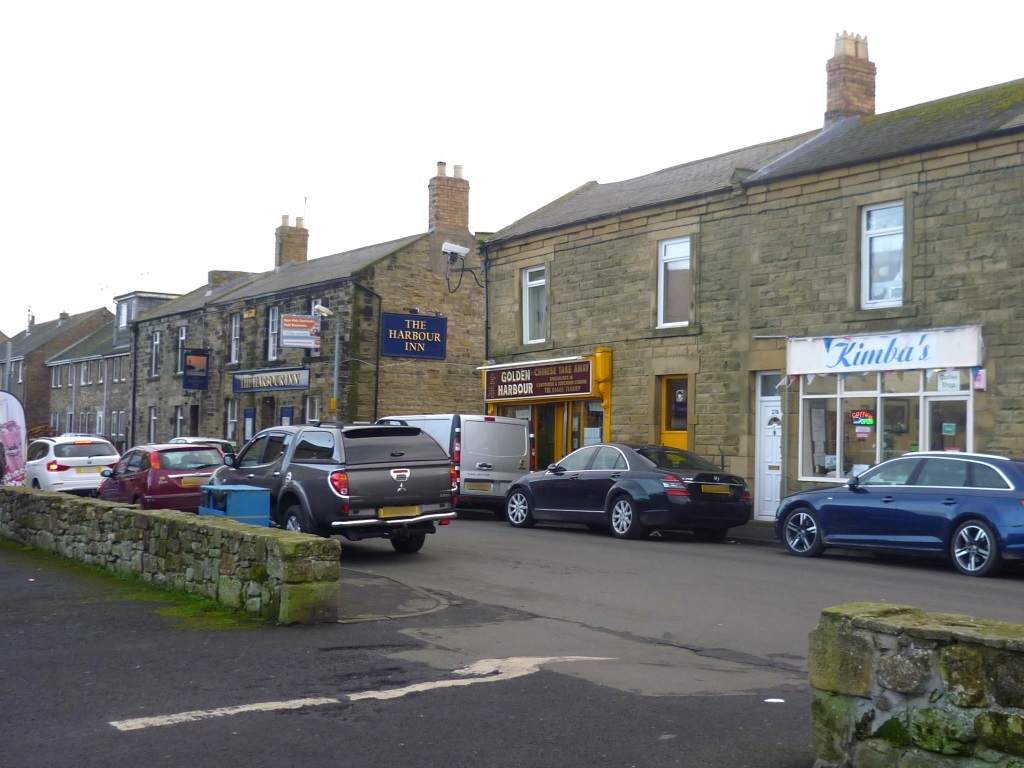 It's also handy while you wait for your Chinese takeaway, should you be self-catering, and for the Quayside Café opposite where the peas are, and always have been, strictly of the mushy variety.

Amble you will, naturally, all the way to the end of the pier, nearly. It was known that a recent fire had almost seen to the wooden walkway but video evidence of three firemen and a big water pistol suggest it was just the local news headline that was really inflamed. 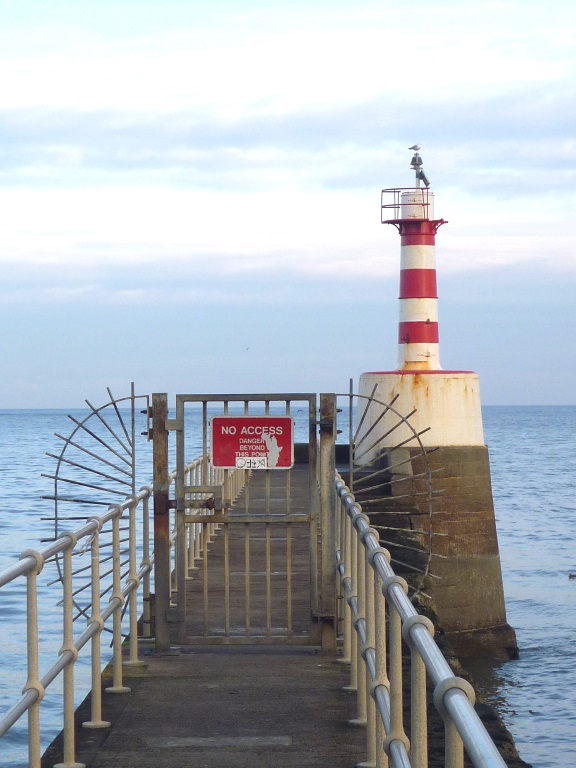 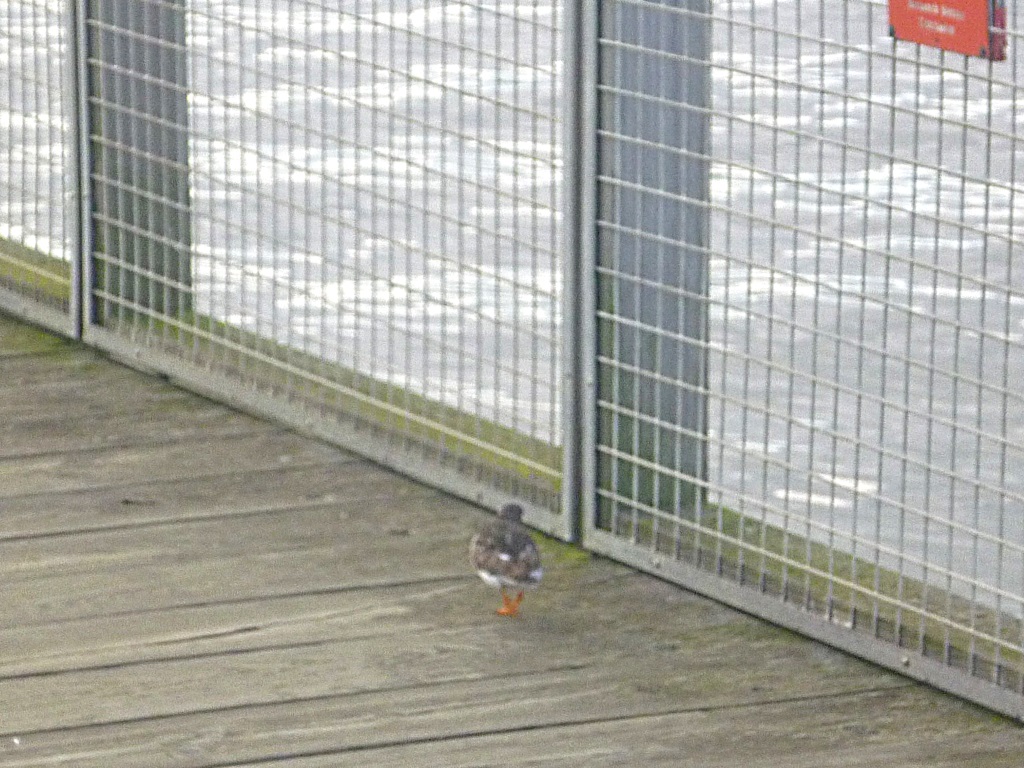 Two piers here and the other one? That one's the wrong side of the River Coquet and to get there, you'll have to walk the mile-and-a-half from Warkworth and all of its attractions. Mid-19th century these breakwaters are, built to provide some additional calm for the natural harbour. The other one has been shortened somewhat by that often choppy North Sea but neither of them can do much about the occasional tidal surges here.

Judging by the fresh seaweed on the concrete back near Bay View Cottages, the last one was about four hours ago. 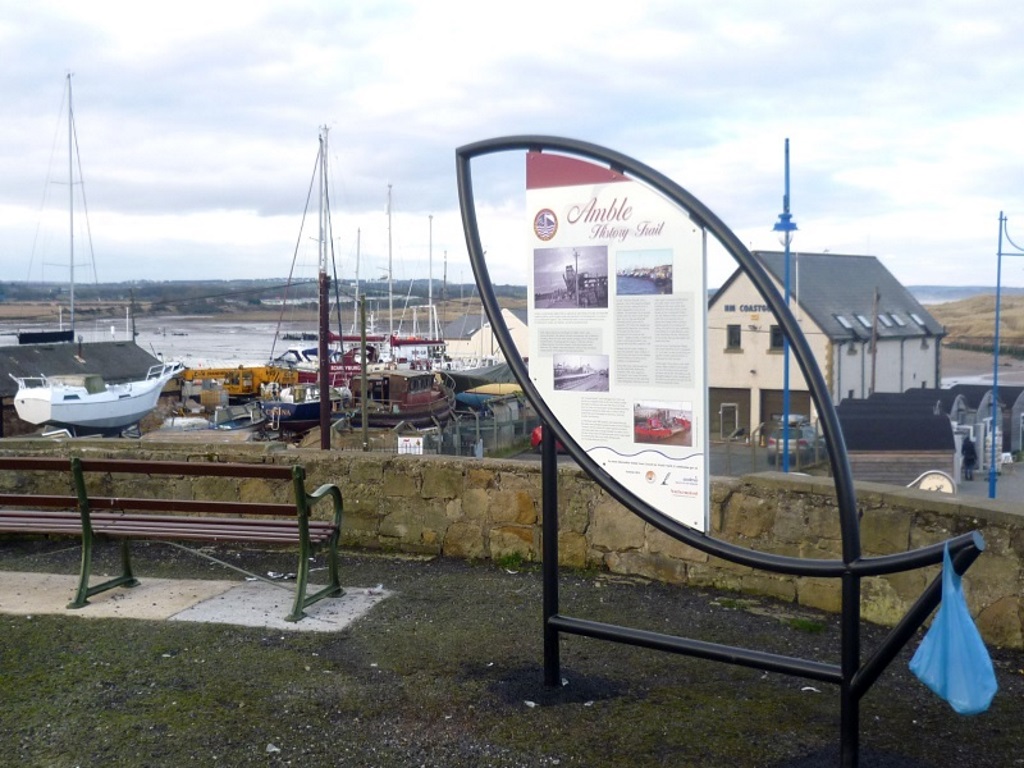 You'll end up doing most of it anyway without knowing anything about it but a pair of pounds from a local outlet will secure you a booklet with more information.

The pier also protects a small bay, which is the preferred beach provider for many a day-tripper in July. 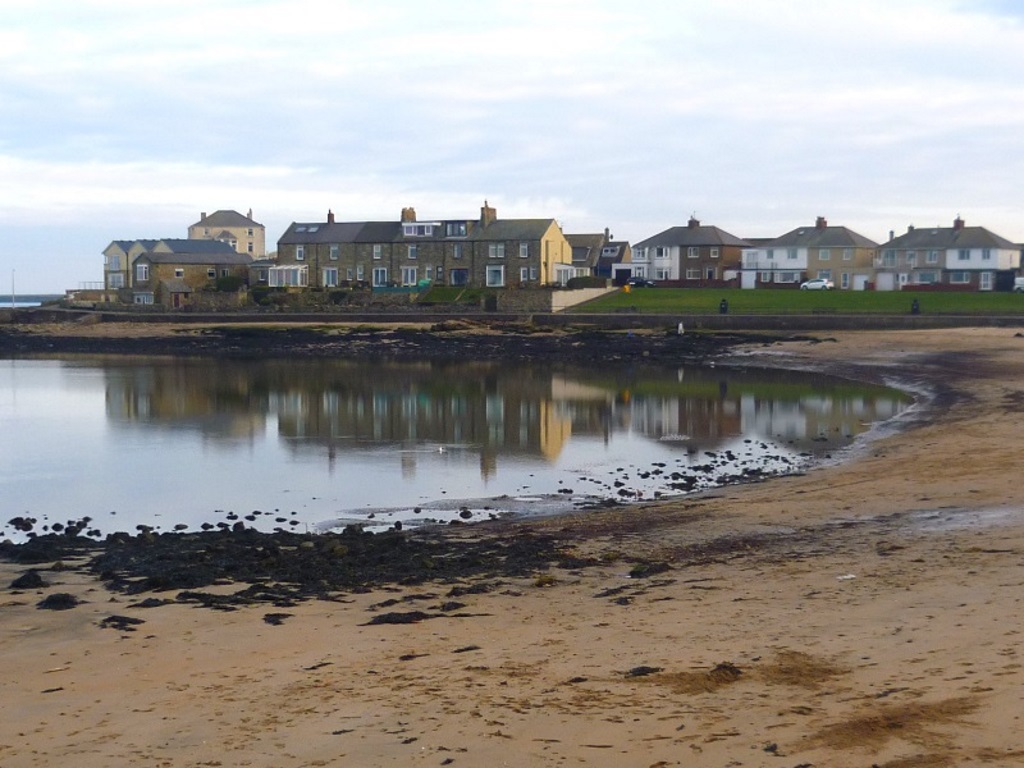 There's a much better beach, just to the south, off Links Road and opposite the caravans and just about at the northernmost end of Druridge Bay.

Druridge Bay is the first place of interest, without a population, on your way up the South Northumberland coast. This spectacular, seven-mile stretch of sand is home to a country park with a visitor centre, herds of Highland Cattle keeping the reed beds in check and a number of small nature reserves.

A pair of boobies and a lesser spotted pecker? Possibly. While most people are here for the beach, some of it is set aside for nuddyists.

These diverse surroundings would have diversified further when they nearly put a Nuclear Power Station here in the 90s. The objectors won that one but were back 20 years later only this time it was opencast mining, which they went on to win as well.

There's still coal in the Northumberland seams, you see, but for periods of the seemingly endless battle, seven years, actually, the nuclear option might not have seemed such a bad idea?

Another addition out of that epicurean explosion, you can find them at the entrance to the new apartments, sorry, second homes, on Coble Quay. 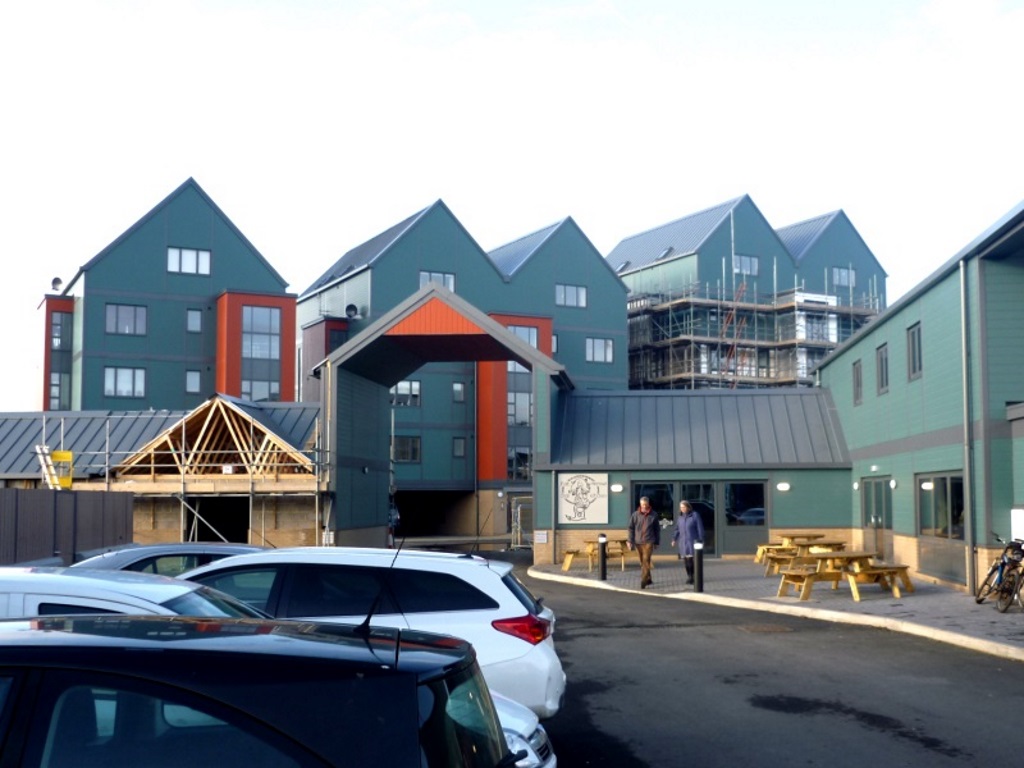 At least you once could, the Fat Mermaid might now be what was formerly Sea and Soil, a highly rated bistro that can be found at the bottom of Queen Street.

This Fat Mermaid might now be called something else and might not still be part of the same operation. It's complicated this and for a small town with a population in and around of 6,000, there's a revolving dining scene to rival fancy London.

While the carbon is being commented on, these old staithes were the final port of call for the coal. The amounts were only ever modest, just serving a single coalfield, they say, but they were in use for more than 100 years and unloaded their last in 1969. 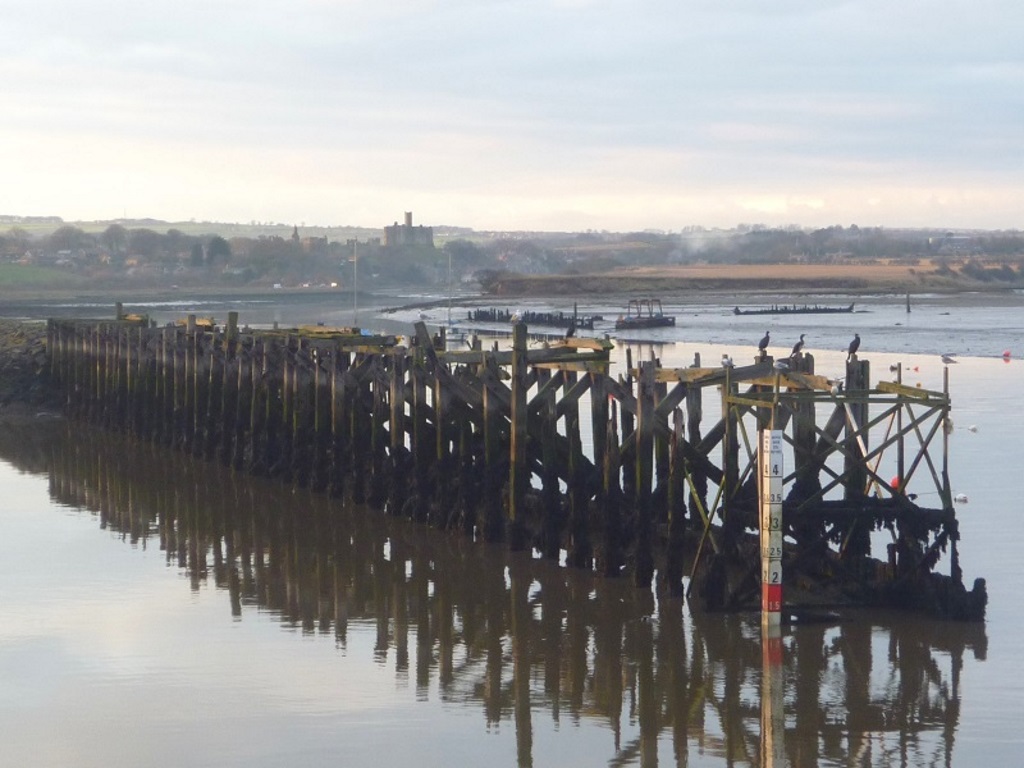 They're now home to three cormorants[1] and a curlew, not shown, and yes, that's walkable Warkworth with its castle in the background.

[1] It's known that you know that wildlife types will say 'cormorant' as in 'We saw three cormorant.' That's a route that's being roundly refused, it's either... 'Seven sparrows' or... 'A spuggie'!

Sold as the '10th best venue to visit when on holiday in the British Isles' by the Sunday Telegraph. That's not the only mouthful, you're likely to see puffins returning to Coquet Island with sand eels.

Although he can't land there, Dave Gray will ferry you around the island and is something this binoc-toting pair of amateurs have inexplicably yet to do although it's pencilled in for next June.

As for the marina, it's mostly leisure with just a handful of vessels looking used to doing, what is believed to be called, a 'proper shift'. 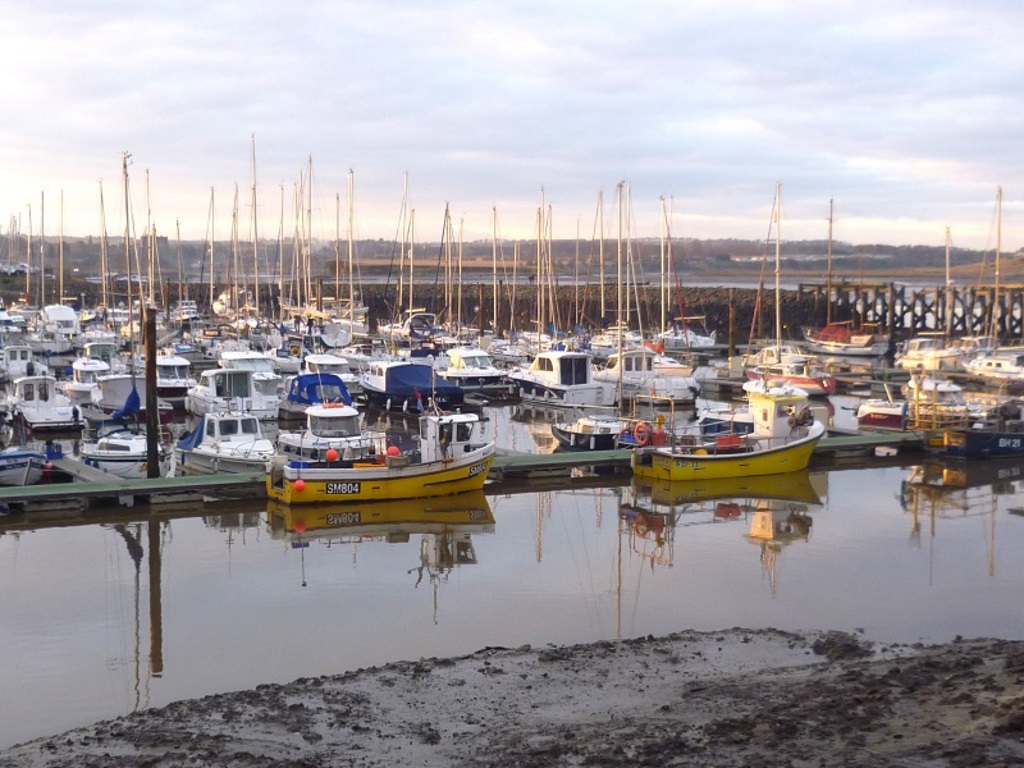 In fact, all of the town's recent redevelopment has seen to the last of the traditional with the boat repair yard making way for apartment blocks or second homes if you'd rather.

The only upturned fishing boat hulls now are those retail pods whose design they're said to resemble and the blow torches are being used on the crème brûlées.

Tarry bottom? The name of the new Wetherspoon™s that will inevitably open here next year.