Welcome to Saltburn, indeed, definitely your last chance for a scenic stop off[1] by the sea before things turn more typically industrial up on Teeside. 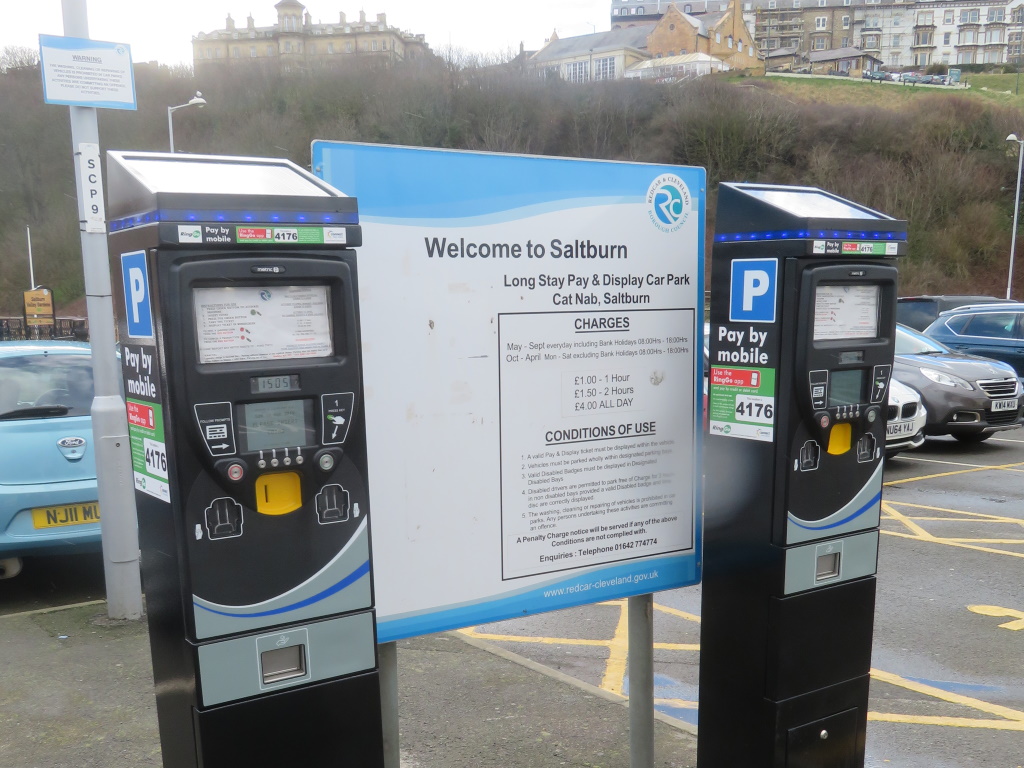 The Cat Nab car park is right on the kink after the road dips down and a competitive tariff makes for a bargain. It's now known that even the thriftiest of folk shouldn't fume at forking out £4.00 for a full day for there's almost an afternoon's worth here, nearly.

That should really be 1s 6d since most of today's value has been provided by the Victorians and, unlike this nonsense, some of it actually works.

[1] And you thought that was Staithes?

The site of the salty stream used to be home to some proper old-skool smuggling and Old Saltburn is where they set up shop. Not that much of it remains and the only barrels you'll see now are the ones being ridden by the surfers, not shown. 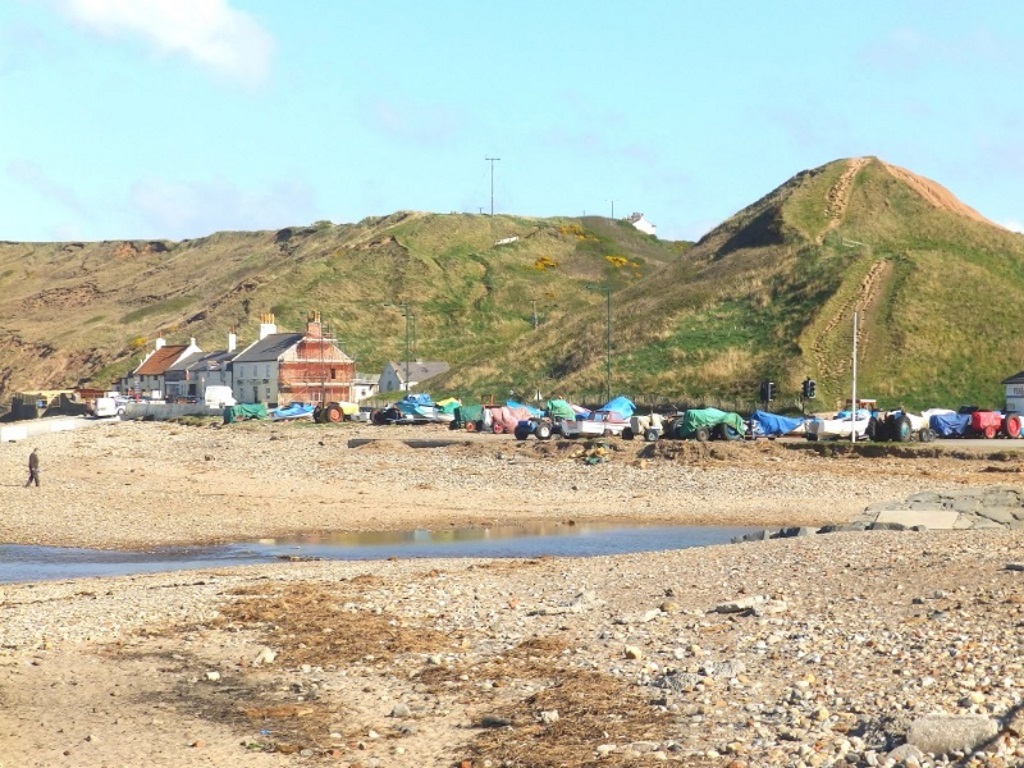 Yes, Saltburn's become quite something on the surfing scene and those in the know have it in Britain's top 10 as the Surf Capital of the North, no less, where Claire looks to have done considerably more homework than SlyBob.

Skelton Beck runs into the sea here via Saltburn Valley and the woodland would've provided plenty of hiding places for that contraband, probably. 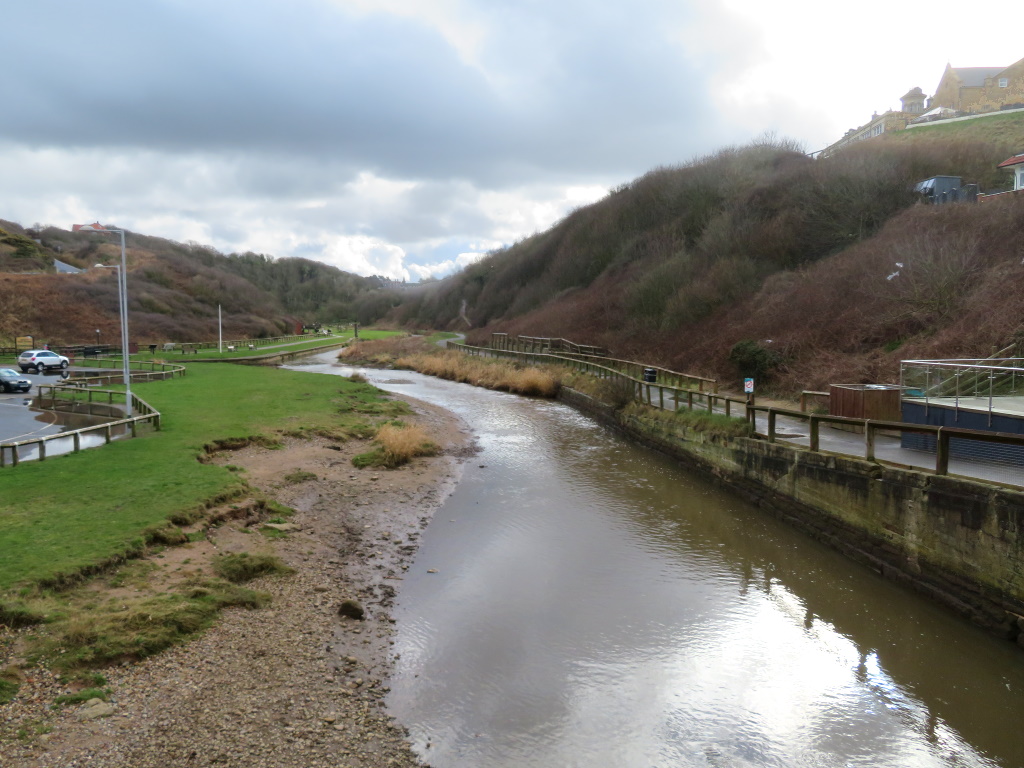 Up until 2016, this ran all rusty red, evidence of old ironworks in the area, but some fine work by a local action group means that the river now runs clear as a whistle.

Speaking of which, you can access the valley by mini choo-choo and before you ask, just for once, absolutely not! 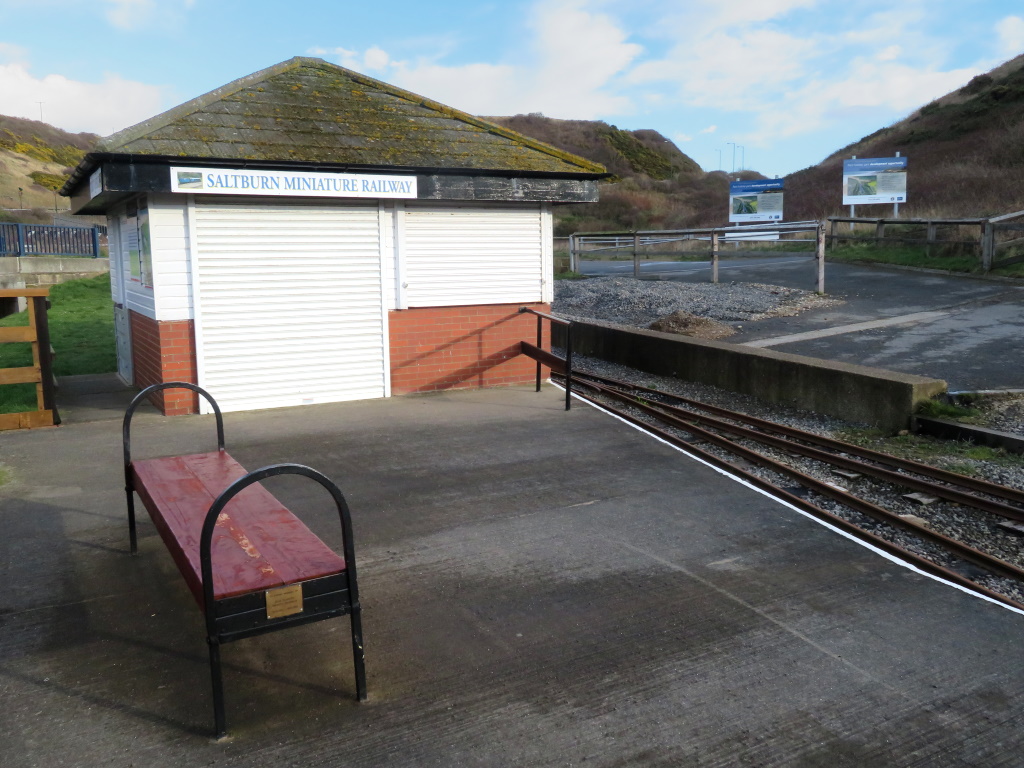 Saltburn developed as a Victorian seaside resort and all by a man called Henry Pease. He was no pudding, Pease, and saw the potential when the railway came and it just so happened to be his railway.

Not this railway, though, the Saltburn Miniature Railway came later and runs for just over half-a-mile south to the 'station' at Forest Halt where you can get off, erm, walk to easily enough by the beck. 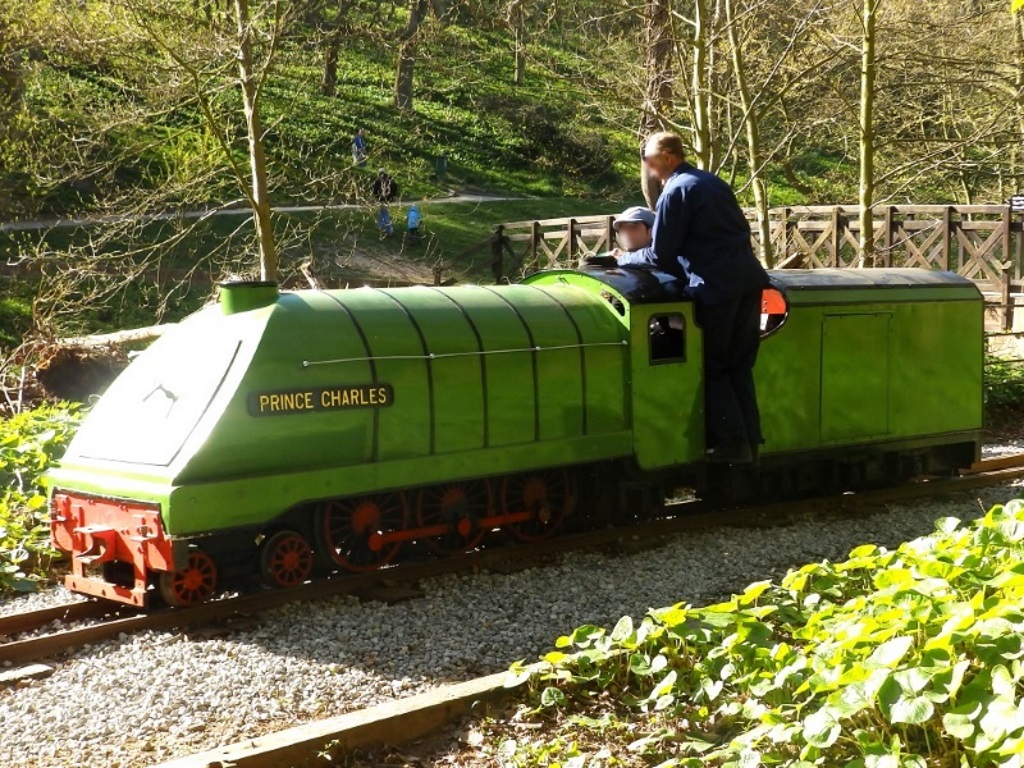 While it's hardly a forest, there's enough shrubbery here to warrant what could be called woodland.

For something wilder, Saltburn Gill is the other side of Saltburn Lane where this dedicated nature reserve is designated a Site of Special Scientific Interest and, as should be known by now, they don't hand them awards out willy-nilly.

Over the bridge, Saltburn Valley Gardens contains an ornate, Italian one, originally planted by a pal of Pease. It's a distraction on the Cleveland Way, a 110-mile long footpath that runs through the valley before the Way heads south by the cliffs and most long-distance trekkers coming the other way today. 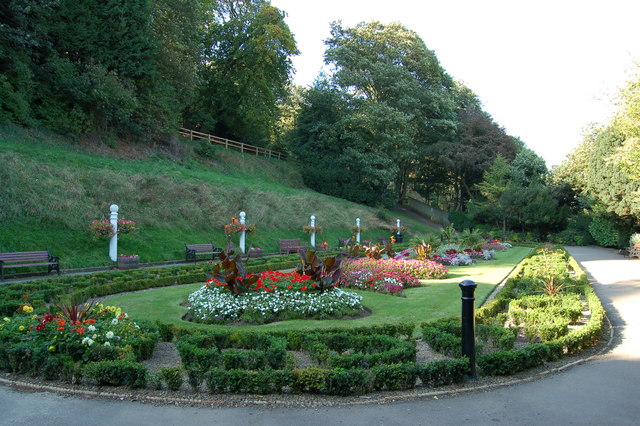 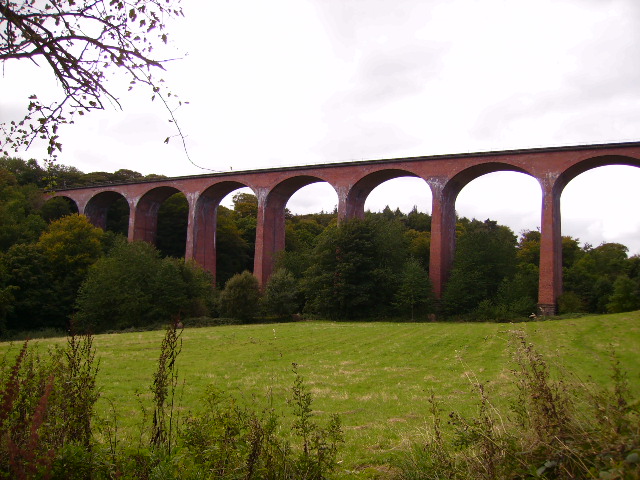 There's more fine work being done out of the Woodland Centre, conservation work to manage the paths, woodland and meadows. These all get a bit more rugged by the time you reach the old viaduct that still carries freight on the way towards Whitby.

Contains the ornate, Italian Gardens and the Woodland Centre. Follow the Cleveland Way through Skelton Beck to extend your stay and take the mini choo-choo, if necessary.

Hidden in the woods, east of the beck is the Rushpool Hall Hotel. Built in 1865 by some indulgent, iron-stone industrialist or other it was home for a while to one Arthur Dorman. 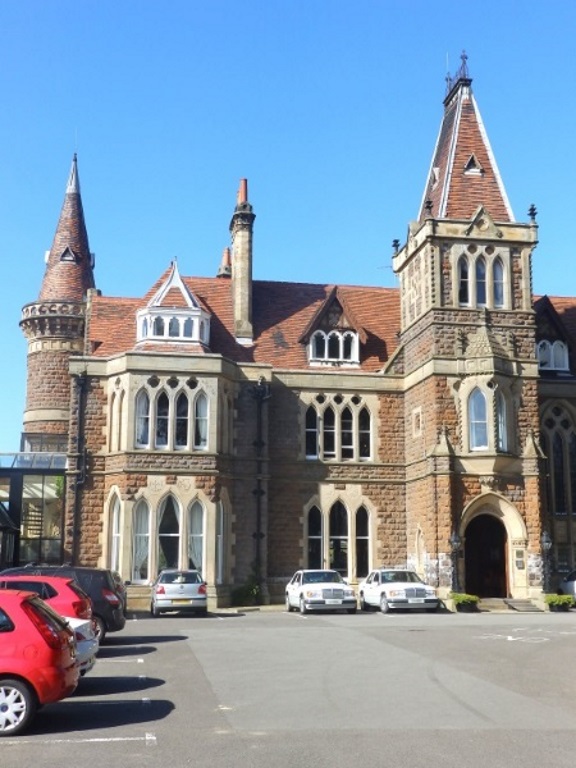 Now, old Arthur liked a trip to Oz and decided to introduce three kangaroos into the grounds. The one that didn't die from pneumonia had a less lingering exit at the hands of the Cleveland Hunt. Poor skippy was, somewhat accidentally, duly dispatched by the distracted pack when it leapt into their path.

It's not thought that this incident did Dorman's reputation down under any harm. Dorman-Long & Co. Ltd. of Middlesbrough would later win the contract to build the Sydney Harbour Bridge, no less.

You can explore the grounds with its lake and fountain and what's thought to be called a ' pergola'. 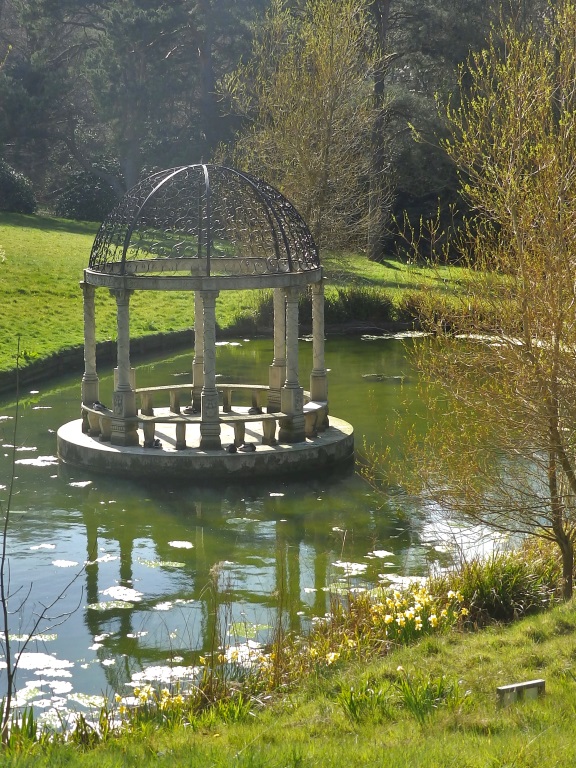 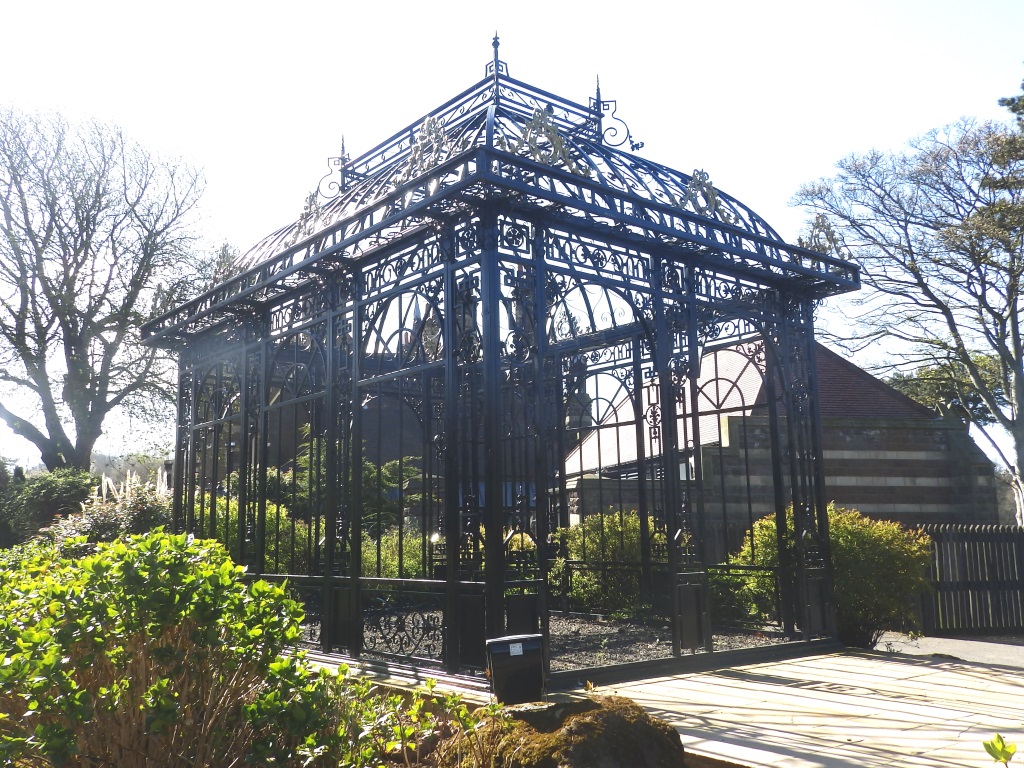 There's still some exotic, albeit a little less jumpy wildlife around in the form of one of these fellas. 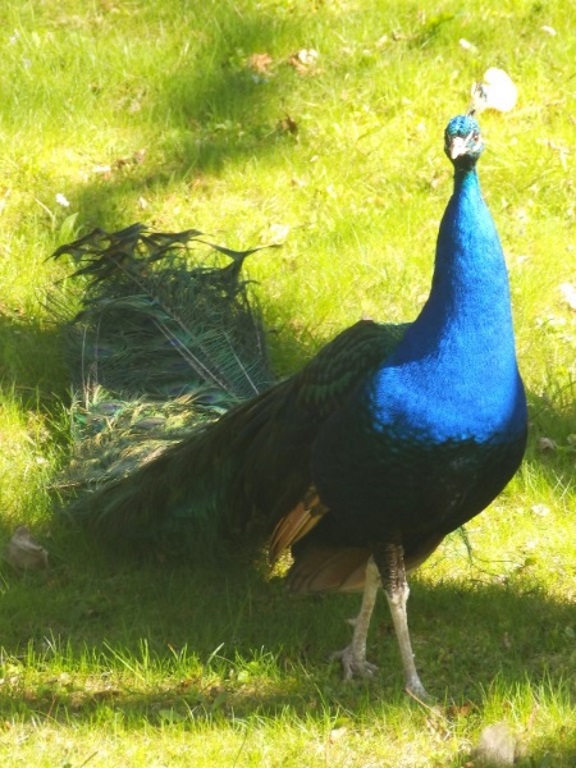 You can make your way back to the mini choo-choo via the grounds although you might not really be allowed. If anybody stops you, just give a 'Click, click, click... here boy! You've not seen a kangaroo have you?'

Rather than backtrack completely, nip up and out of the gardens to follow Marine Parade round to where the sea can soon be seen, again.

Looking down to the beach and pier here and if this looks familiar, that's because it's one of the Idents for BBC™'s regional news program Look North. If you do look north then because of a kink in the coastline, you'll be looking straight out to sea. 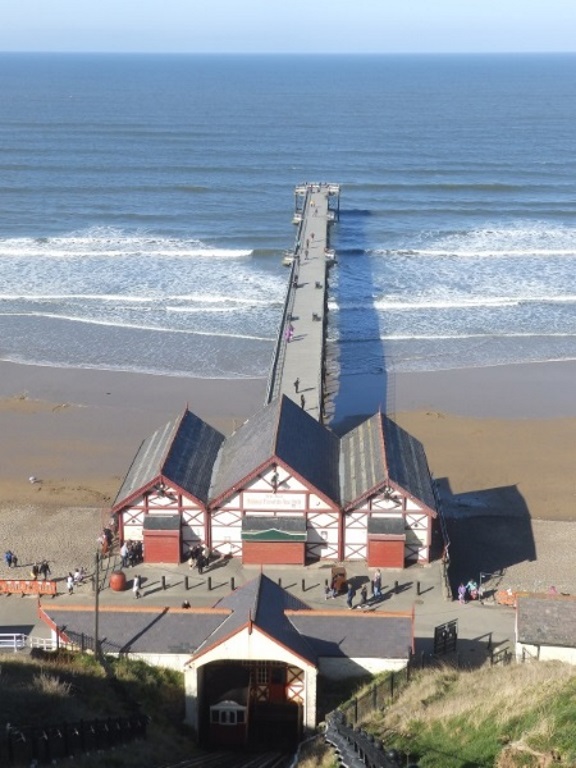 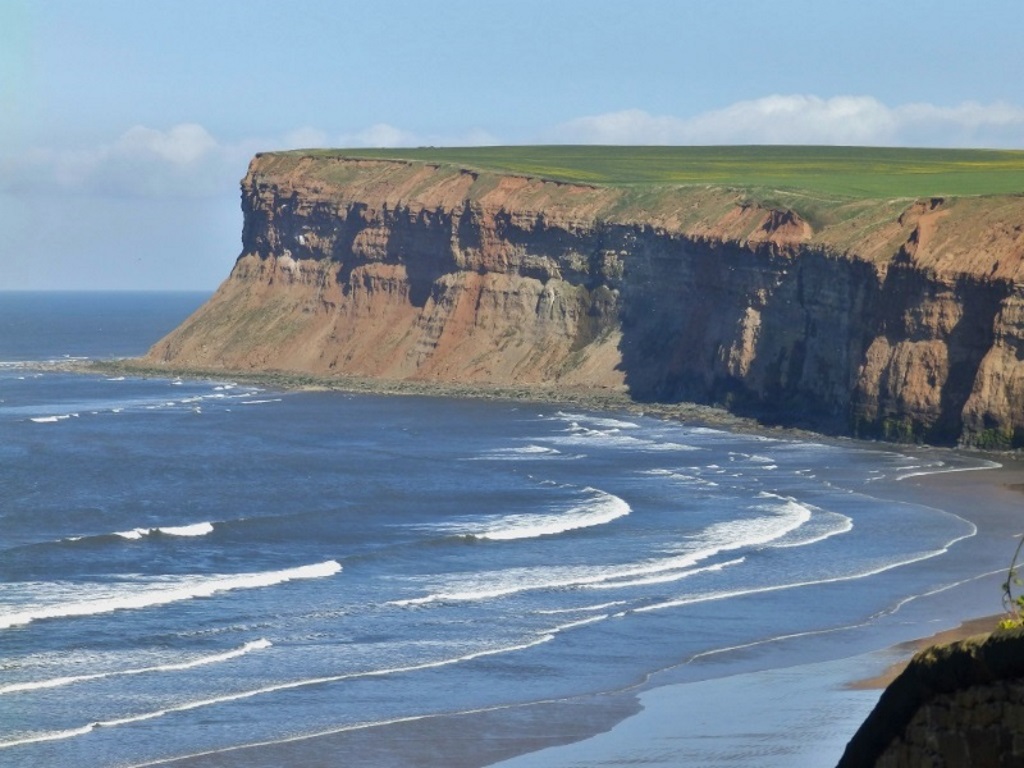 Look left and westish to Redcar's wind farm or right to the cliffs at Huntcliff Nab. These are near-400 footers and host the coastal stretch of the Cleveland Way that now sees you south to Scarborough.

That's for another day, possibly, there's still plenty of 'lower' Saltburn to see. If only there was some way down from the top of town?

The town centre is likely to have been bypassed but it's right behind you, either side of the railway line. The other side of the tracks, here is perfect for that lunchtime snack with it doubling up as a restaurant in the evening.

There used to be a rickety, wooden cage that did the hoisting up and down but it had a habit of jammin' and even back then had Health & Safety frownin' and a tuttin'.

It was replaced by the Cliff Lift, a tramway that's inclined to go up and down by the filling and emptying of 240-gallon water tanks. If that doesn't sound convincing on paper, it's been here since 1884 and it's 55 seconds up and down. It's also said to be the oldest of its kind still in working order[1]. 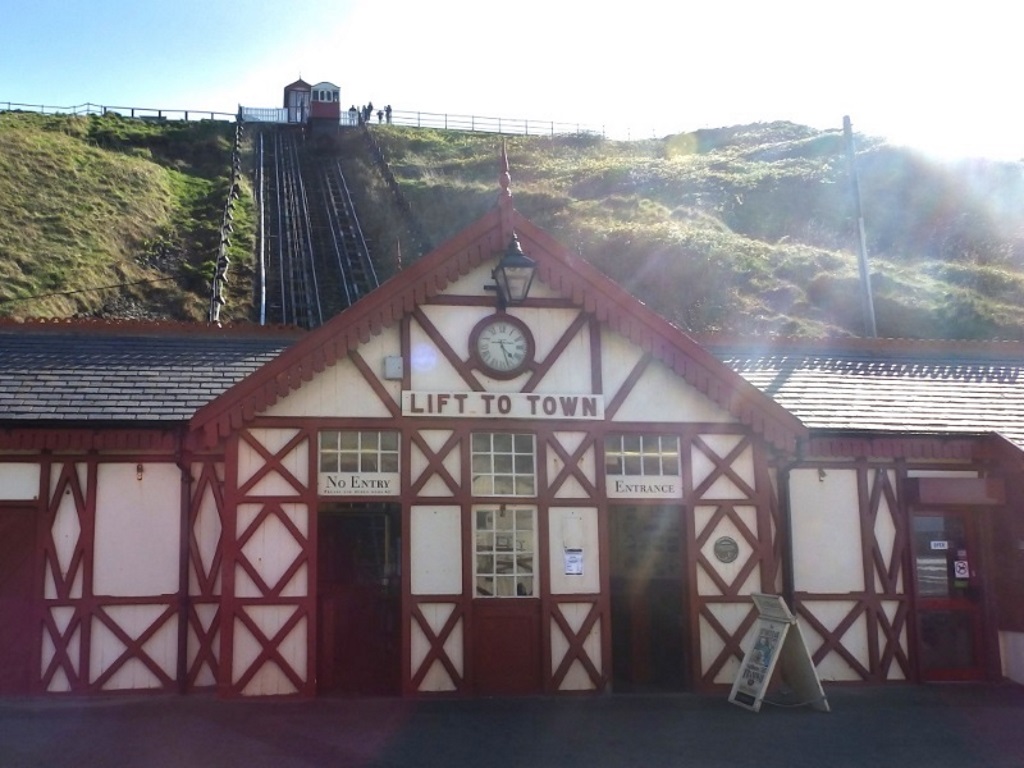 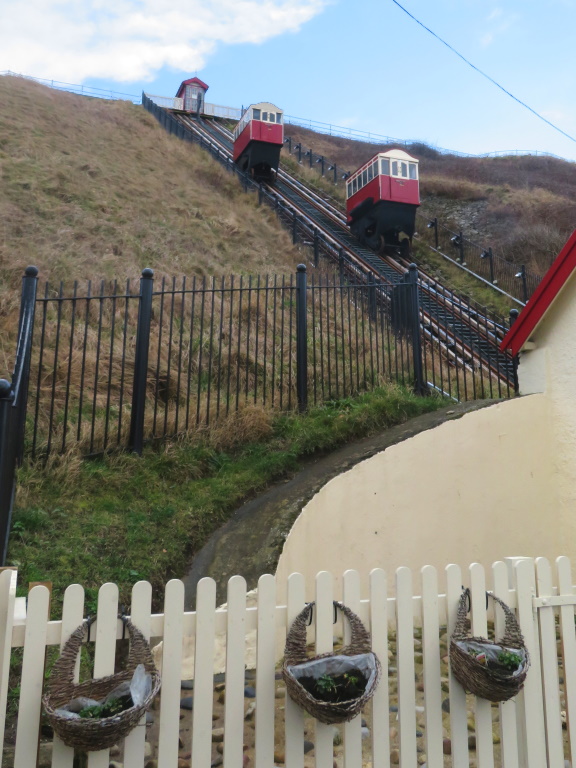 The wooden interiors of the tramcars are a treat and the stained glass windows date from... 1979! 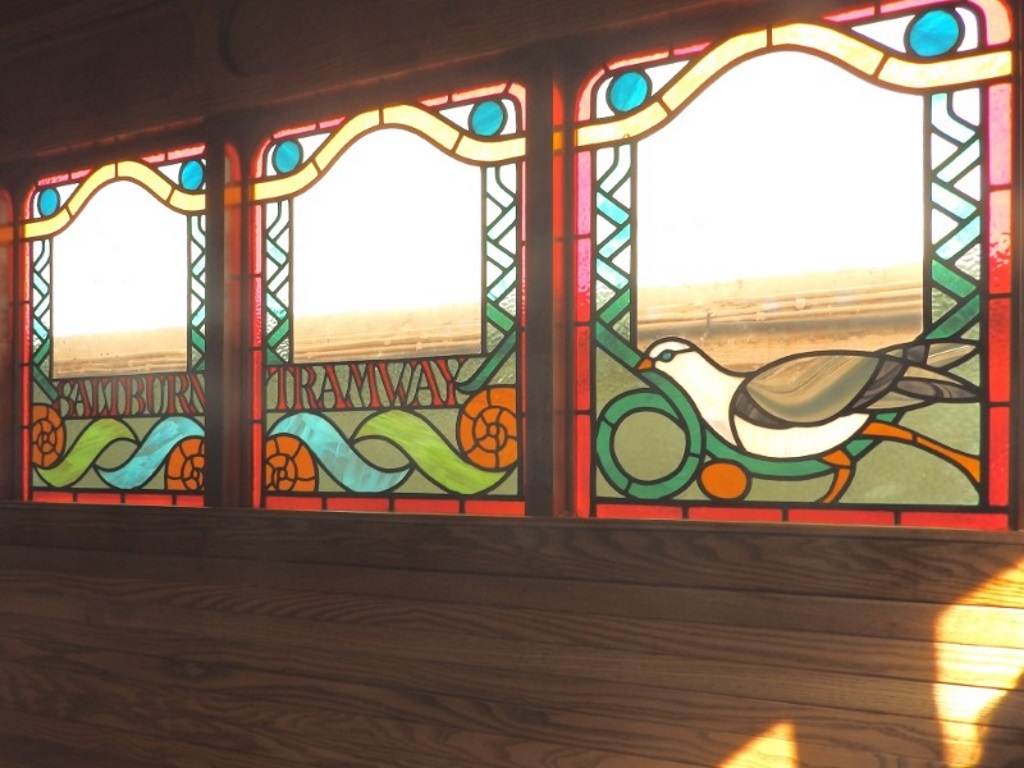 That was their last big renovation and local glassworks were employed to rectify the diabolical decision to remove the originals in the '50s. I don't know, some pen-pusher at City Hall probably thought that was progress, probably.

[1] See also every other piece of old, operating machinery in the UK that will make a similar claim. The widest flywheel in the West Midlands for example.

The pier dates from 1869 and was originally built as a landing stage for the steamers, ferrying in then well-heeled holidaymakers from Hartlepool and elsewhere. 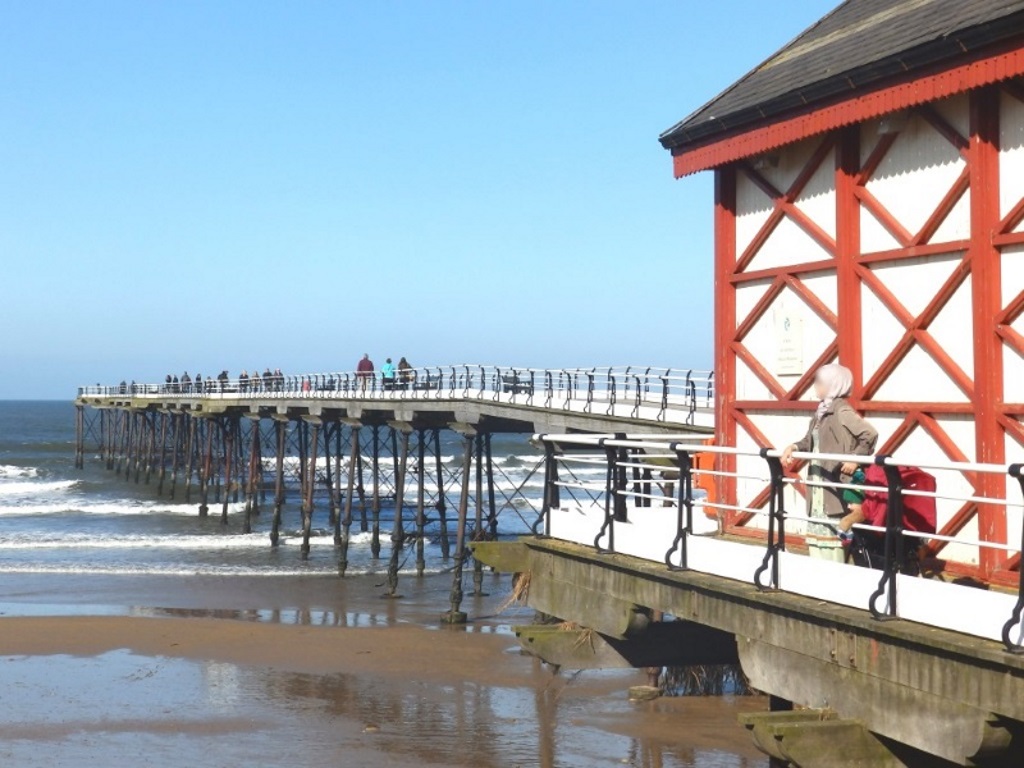 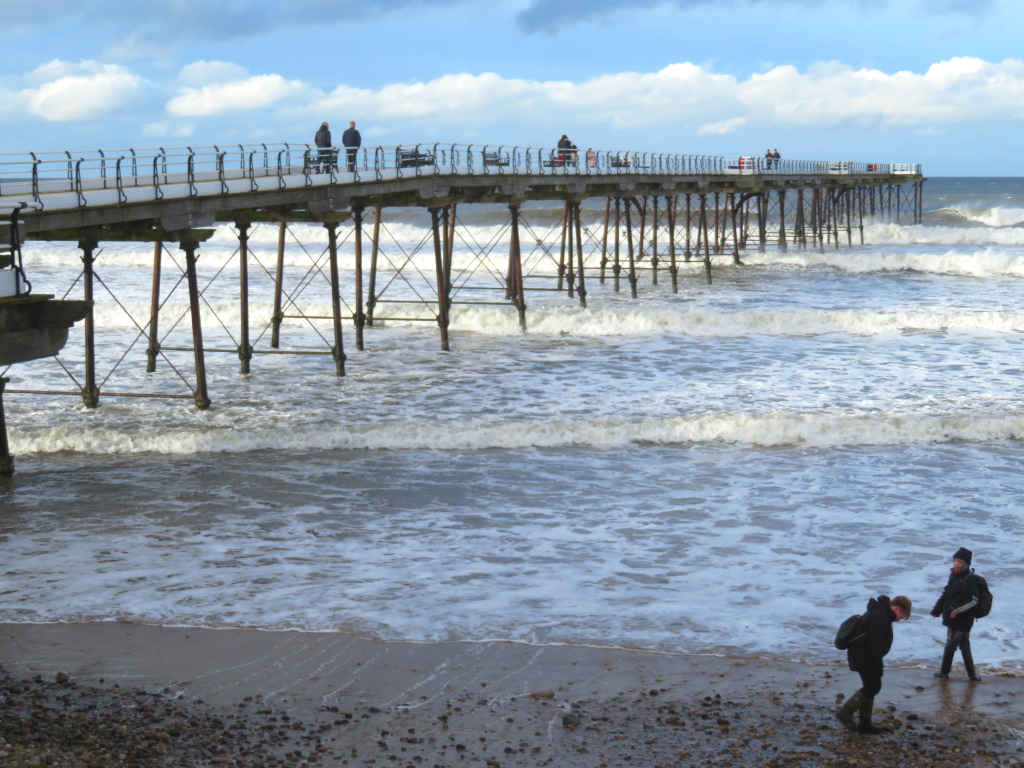 It's less than half of its opening 1500-foot length now, a succession of scrapes with the sea have seen to that. There was also a bit lopped off to discourage holidaymakers, this time, ones from Germany during you-know-when.

Rather unusually, it doesn't seem to have suffered from a, taps nose, fire and you can't say that about most of them. It's the northernmost, surviving one in Britain, pleasure-wise, but you're not convinced of that fact?

Well, in the same time you've just spent in Saltburn, you try spending another two hours finding out that actually appears to be true.

If you've never heard of Saltburn, you might say Pease's vision didn't exactly catch on. Try telling that to the 45-minute queue for, admittedly excellent, fish, chips and peas of the mushy variety on the promenade.

There's a modern take on the traditional interior and, on a sunny, bank holiday, the waiting time for a takeaway didn't look to be that much less