Possibly your last chance for a scenic stop off[1] by the sea before things turn more typically industrial up on Teeside.

There's 365/24/7 parking at the top for the quaint fishing village at the bottom making this more Cornwall than North Yorkshire. 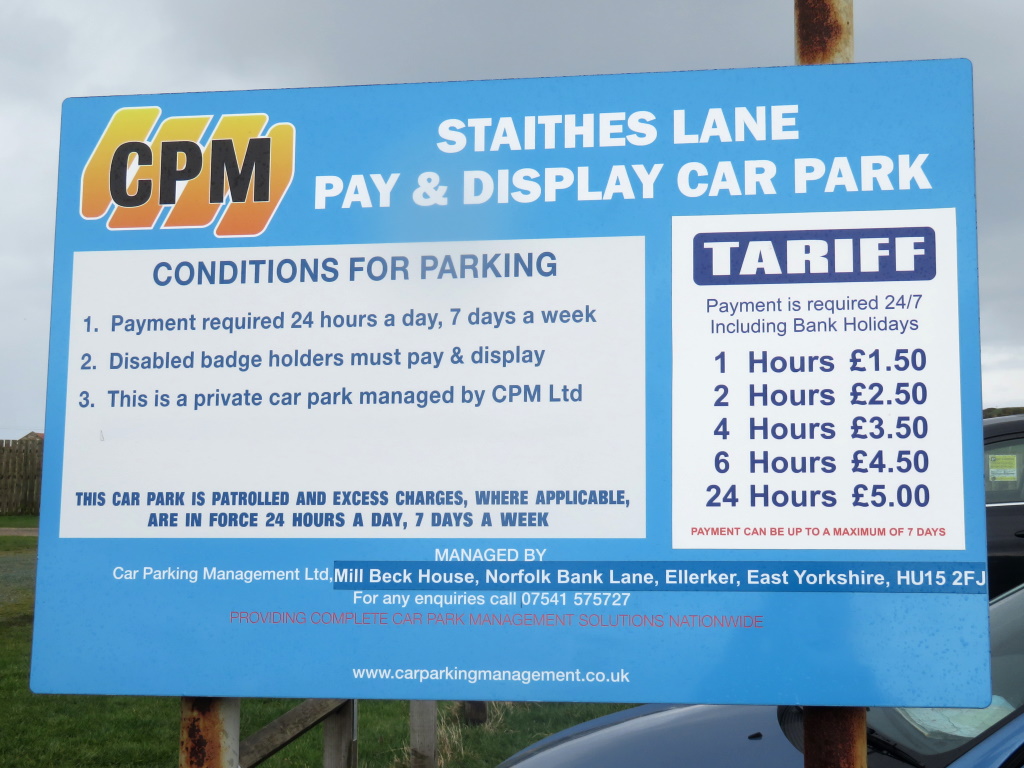 Just like Cornwall, be warned, that makes for an inevitable lug back up from people trying to sell you things you don't really need but not to nobody still living down there since there ain't none of those left, right kids?

[1] Never been to Saltburn-by-the-Sea, then?

It's a fairly steep drop down with what's technically a beck, but really more of a gorge, on your left. 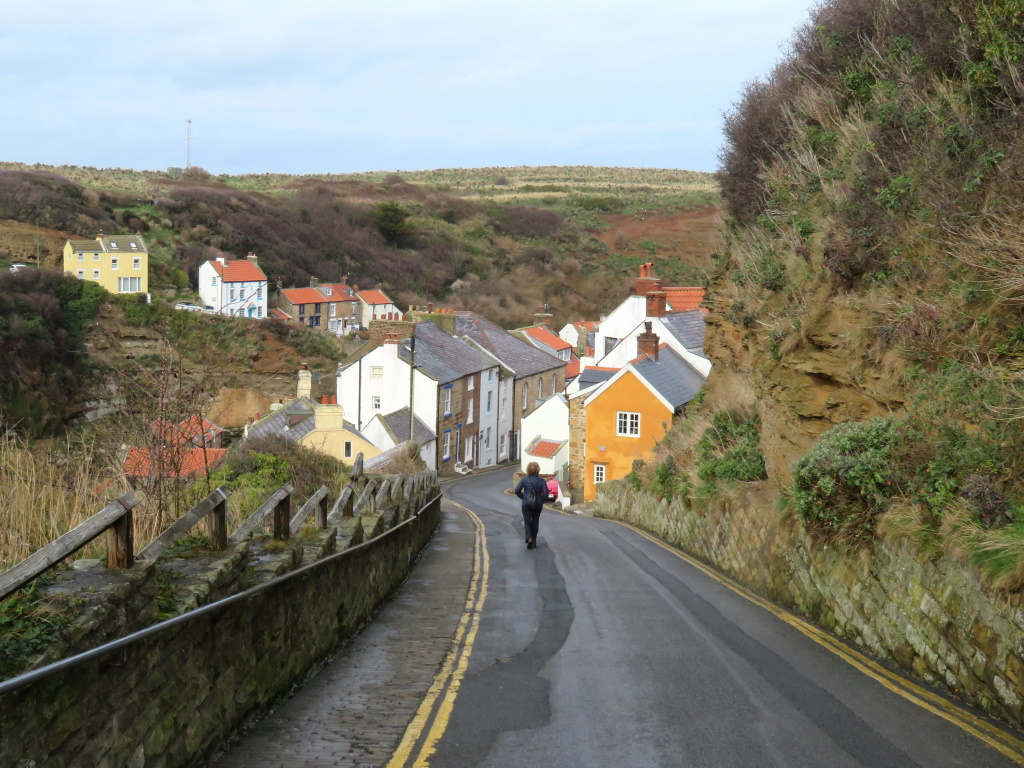 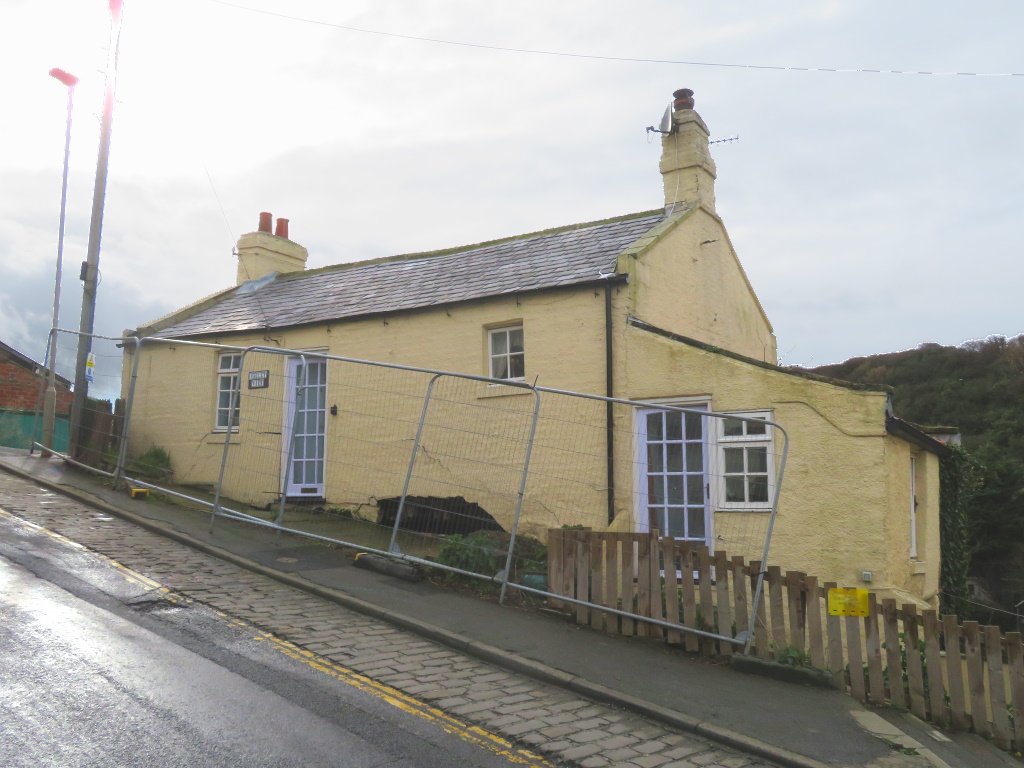 The runoff from the North York Moors is responsible for that, that and the subsidence, probably, with Valley View still not responding to any enquiries for a week in July.

If you were educated, sort of, in South Tyneside in the '70s then Staithes should be all too familiar. School 'camp' was a week in an army hut, the old-skool accommodation full of bunk beds and dead spiders.

They've been renovated for the holiday rental market, these days, although it's not thought today's tenants are in fear of a frustrated PE teacher still allowed to wield the slipper, when necessary.

A couple of art galleries and Dotty's Vintage Tearoom explain the draw for the day-tripper but there's also a high demand for holiday homes. That's somewhat surprising since traffic is actively discouraged to the point of being downright dangerous making unloading the 4x4s, quite frankly, frustrating. 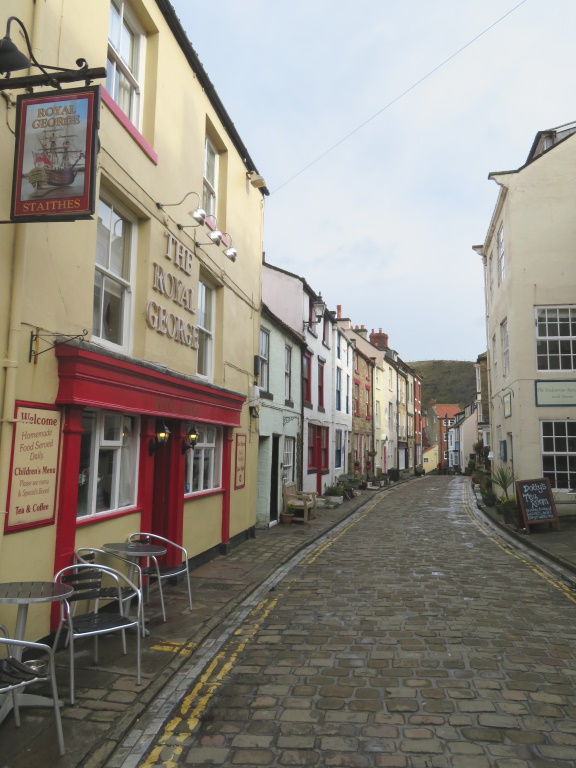 It is, however, all rather eye-catching and since nobody actually lives here, remember, absolutely everywhere[1] is available to rent for a nostalgia-fuelled, '50s-themed fest of a fortnight. 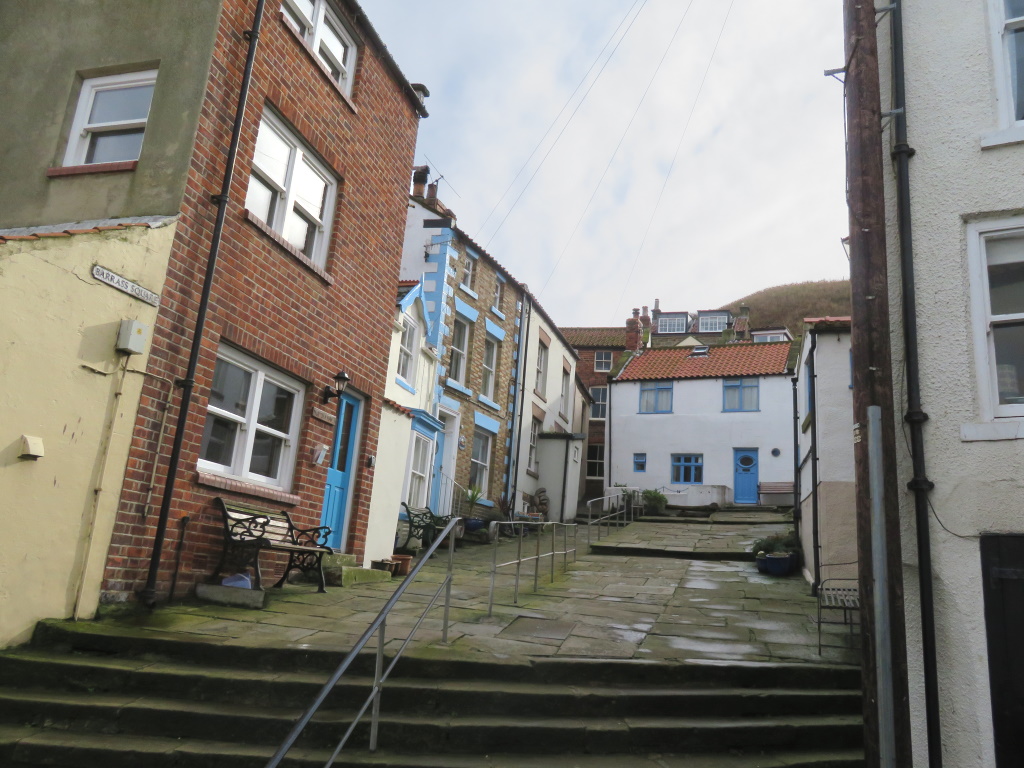 [1] The visible giveaway of a key safe next to every door.

Just as every settlement in North Kent bangs on about Charles Dickens, this entire stretch of the Yorkshire Coast makes some claim or other to Captain James Cook, no less.

Staithes' credentials are as good as any since young Jim was apprenticed as a grocer boy and came to live here when he was sixteen.

It's said the sight of the sea inspired him to spend the rest of his life on it, which is why he nicked off to Whitby, and you can find this all out in an old Methodist Chapel, now the Captain Cook & Staithes Heritage Centre. 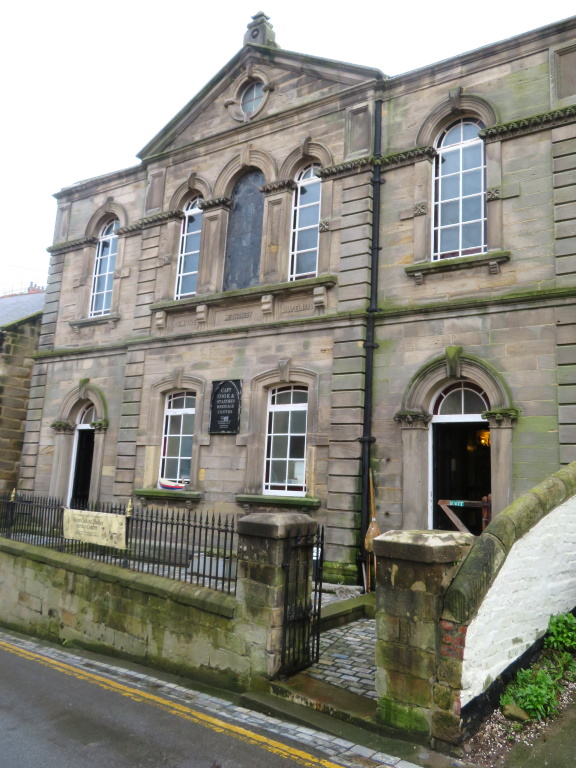 His apprenticeship was at a time of pre-preservatives and canned goods, of course, so the expiry dates of the stock he stacked and shelved were no longer than when he went on to say... 'Howay lads, who fancies a week in Hawaii?'

The high street leads to the harbour where a pair of breakwaters provide a calming influence. Here's where everybody huddles but not for the, just about, small, serviceable beach or the prospect of doing some old-skool rockpooling. 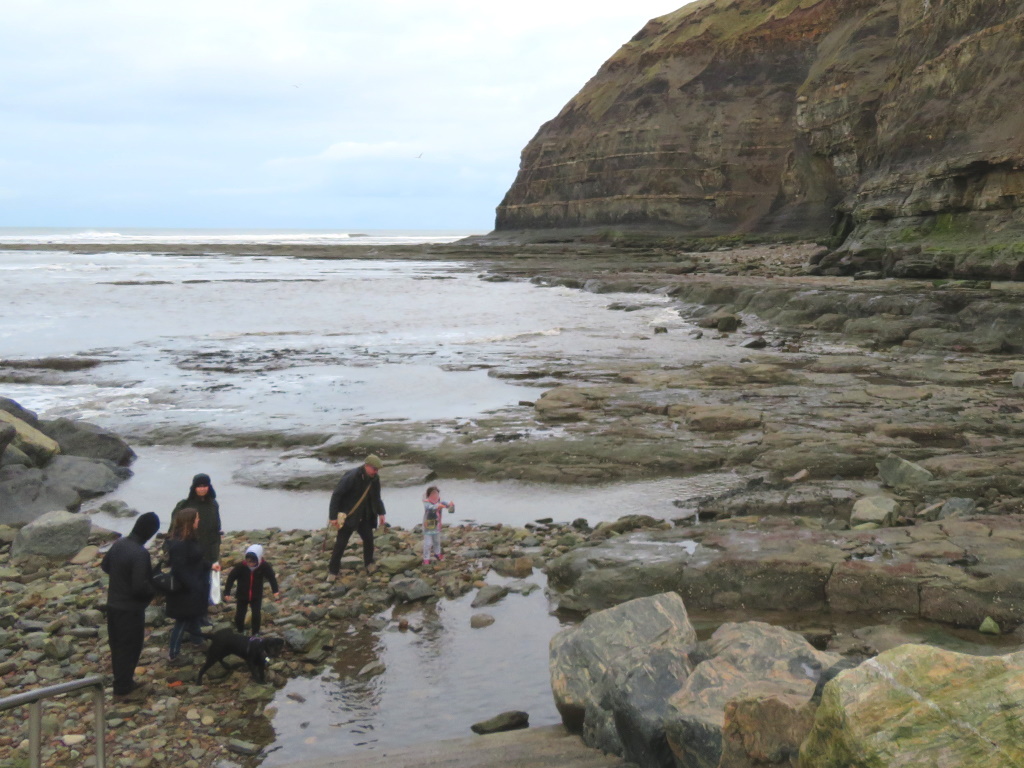 No, this is the only location for a half-decent signal, they say, although it's already understood you'll be leaving the technology behind for this trip.

There's a heck more of a huddle, however, here at the harbour in September and there's a hint at the end of the breakwater. 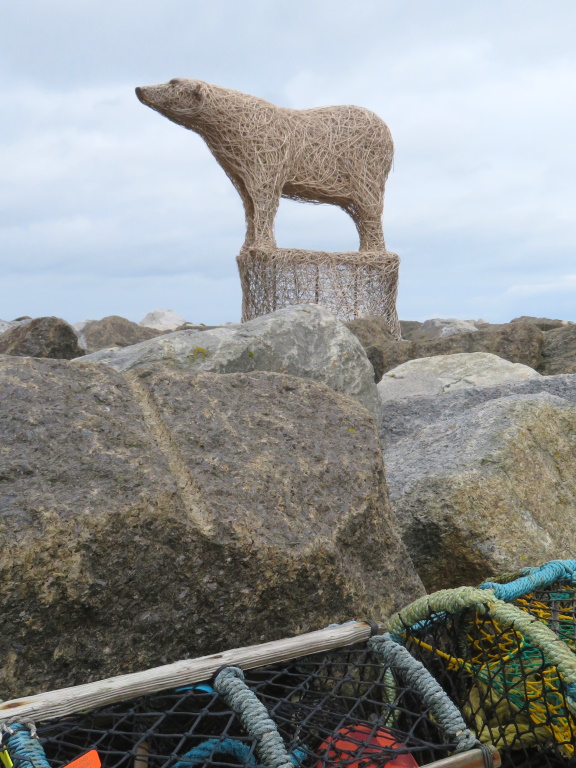 No, the Arctic sea ice isn't melting that fast, it's a piece of work by Whitby sculptor Emma Stothard who put it here in 2018 for the annual Staithes Festival of Arts and Heritage.

During this long weekend, the residents open their doors for exhibitions and demonstrations although it's not exactly known how that works since nobody actually lives here, remember?

The polar bear might not be here no more so when a man with a lens, which is longer than really necessary, eventually gets out of the way, just enjoy the view back to the village. 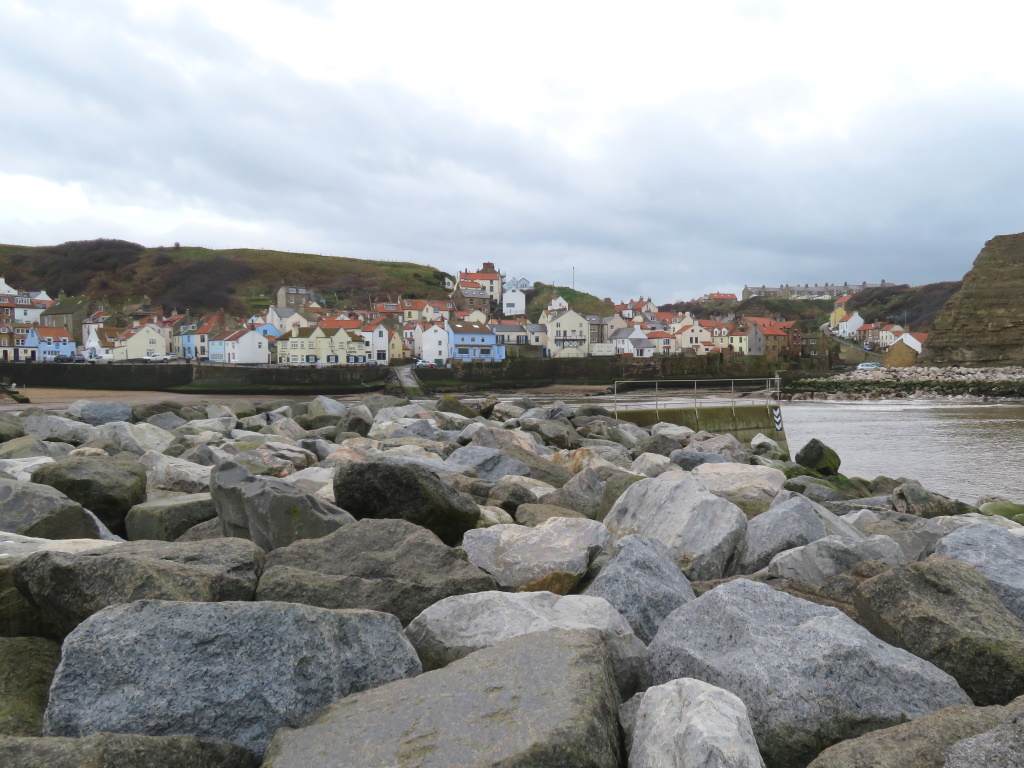 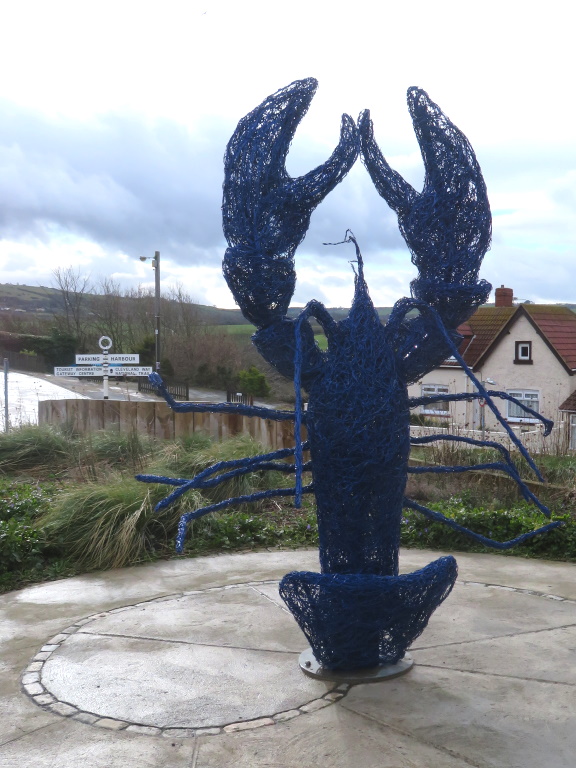 You will, of course, already have seen a similar piece of Emma's work, a lobster, up at the car park. That's genuinely not a case of being disingenuous, it was just to disguise Staithes' artsy attractions and to keep the reveal until now so, in a way, it was a bit.

The geology that guards the harbour hosts part of this 110-mile footpath, half of which is across the North Yorkshire Moors and the rest along the clifftops on the way down to Filey. 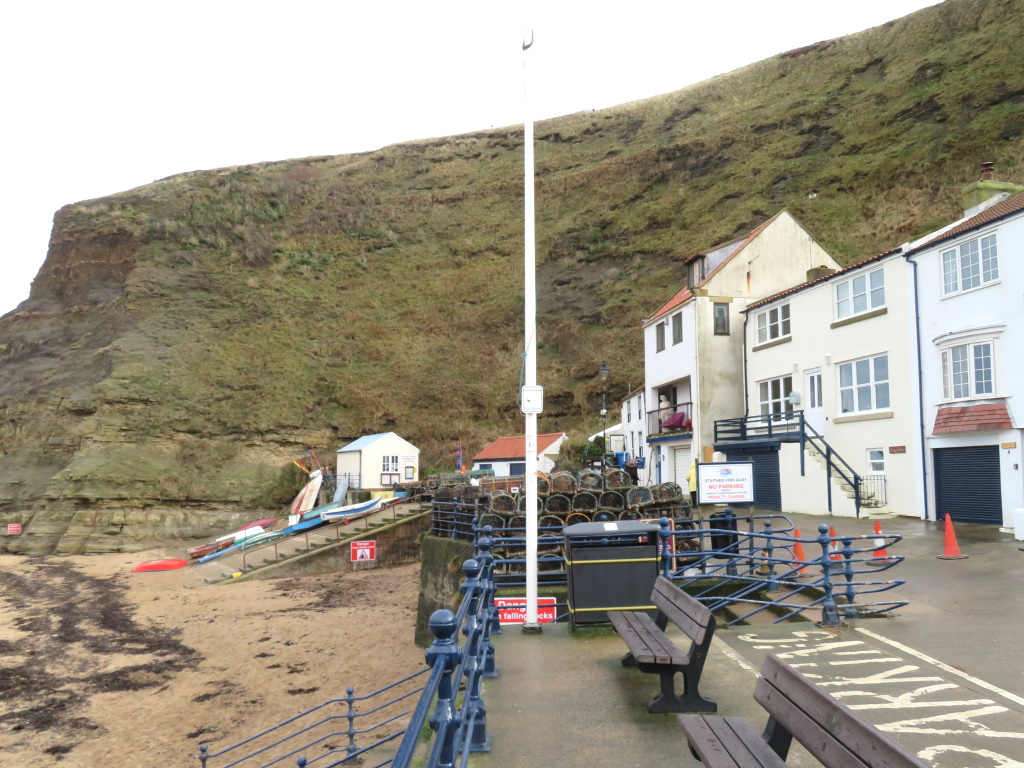 Just for once, you can do this one in either direction and, either way, Staithes is just about halfway. Most folk will take about nine days in total so from here that makes another four-and-a-half or so to go or 50-odd miles in old money.

The lug back up the relatively dull road can be avoided by lugging back up the marvellously named The Old Stubble. 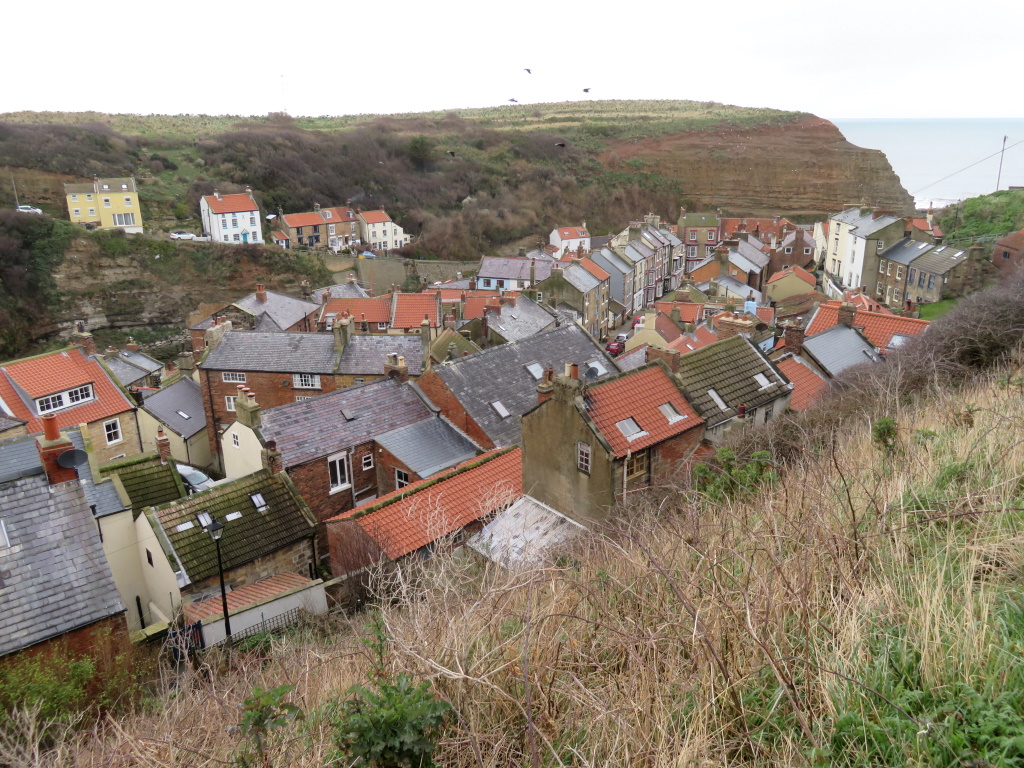 It's along here that a view confirms Staithes to be bigger on the outside including an area on the other side of the beck that's home to the Lifeboat Station.

There's a footbridge over to there but that wasn't always the only way across. The old station building next to the car park is a clue as is what's left of, what's believed to be called, an 'abutment' that helped to support the Middlesbrough to Whitby railway. 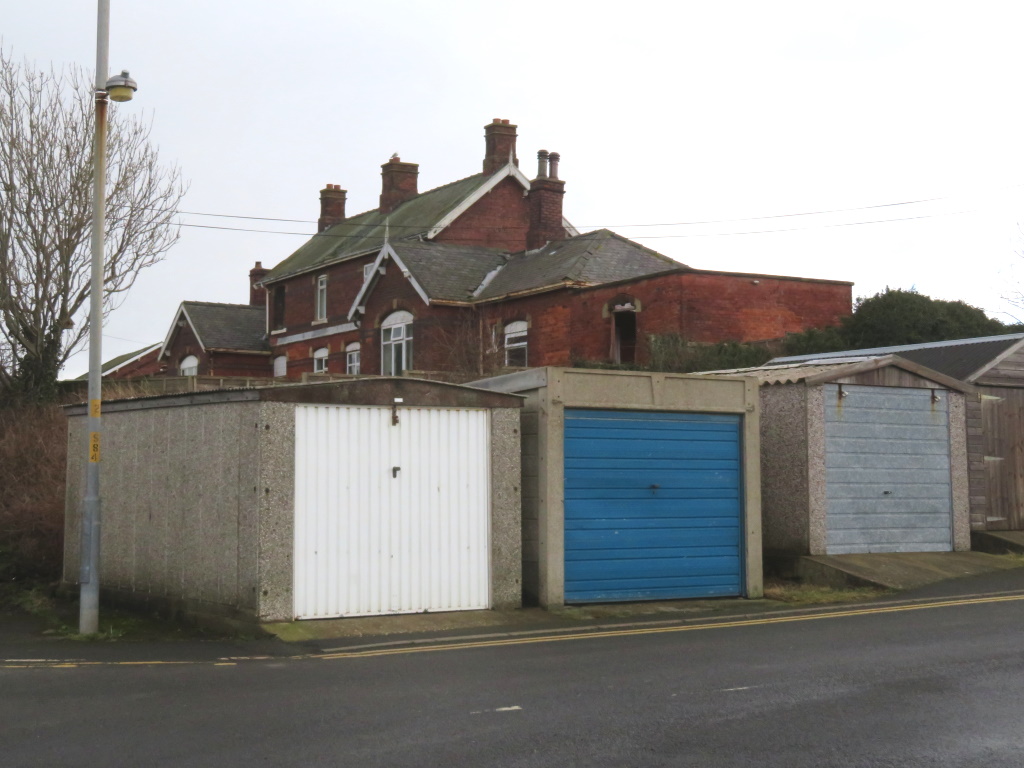 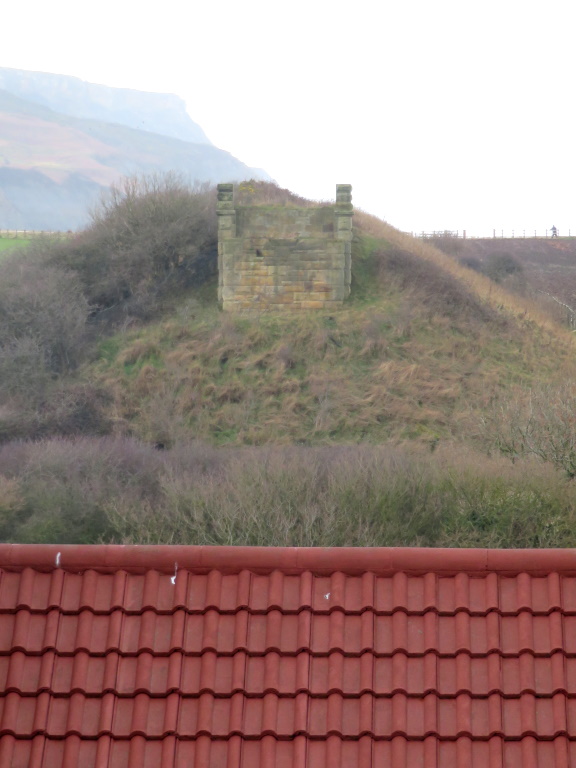 Special clamps on their wheels helped to stop trains from not blowing off where a 150-foot drop down from the bridge to the beck beckoned. Thankfully, none never did but with alternative ways to Whitby, the viaduct was blown up, in 1960, actually, so not down to so-called 'Dr'  Beeching, since you ask.

The height of the railway was nothing compared to the cliffs in the background and Boulby Cliffs are a drop to the ocean of, get this, 666 foot! These can make some claim to being nearly the highest in England and they're even better than Beachy Head, no less.

This significant stretch of coastline could be argued to be blighted, ever-so-slightly, by a potash mine. It accounted for all of the UK's potash production, whatever it is people use that for, and is still the second deepest mine in Europe, no less. 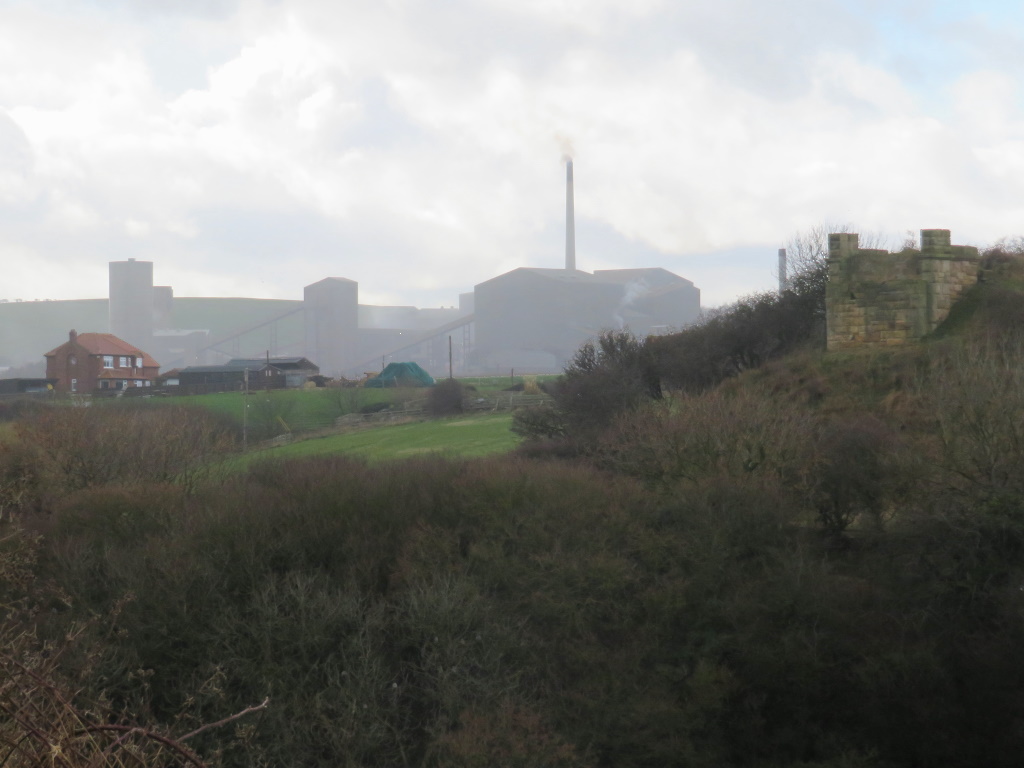 You could stack four Eiffel Towers down to the basement where there's even an underground research 'facility'. Now, the last few Bonds were relatively well-received but here's a chance to recapture the heyday...

An international, crazed, criminal mastermind, Señor Ja!, has his base in Boulby and steals the Eiffel Tower because, as is now known, he has more than enough room for it. Not content with that he targets London's Post Office Tower and then, well, that still needs some thought but JB is sent in to sort it all out.

Unbeknownst to Bond, however, Señor Ja! is also manipulating the processing of potash into... pot-hash! This he feeds into the global water system, turning the mass population into gigglesome oafs from whom it's much easier to steal their towers.

That makes for an extended one hour and seven minute scene in which, after accidentally drinking from an underground tap, 007 wonders what it would be like if there were ten days in a week before, now strangely peckish, trying to find the canteen.

Hey, Fleabag! You reading this?