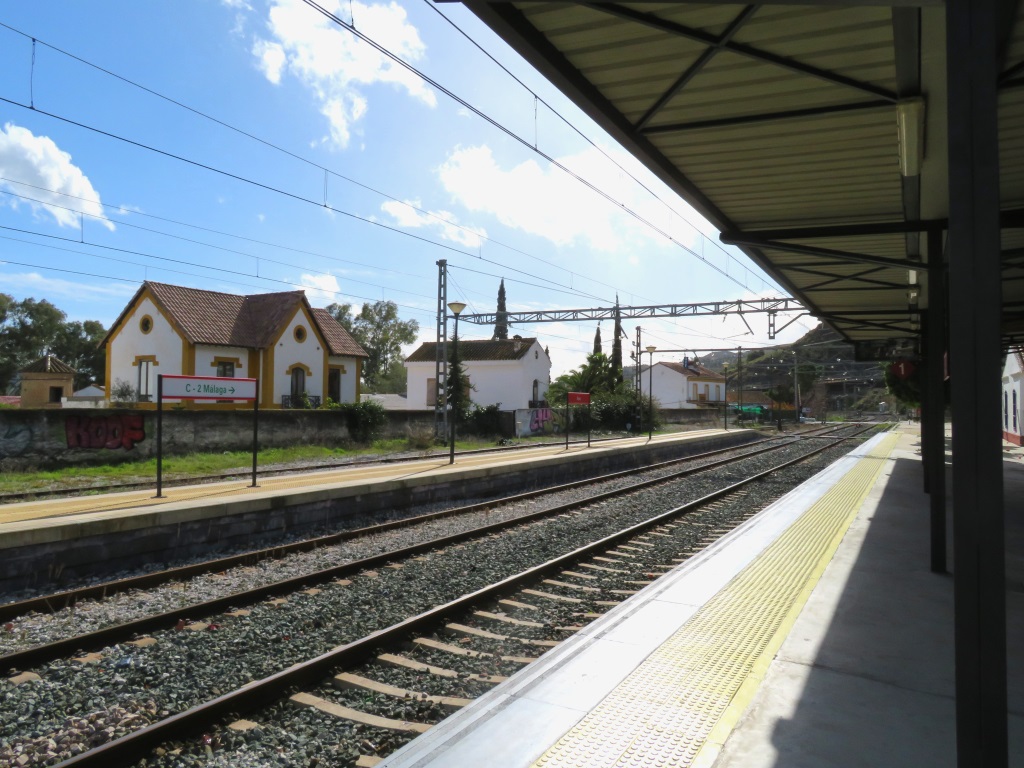 The train station is a little isolated, you see, and it looks like the shuttle bus up to the traditional, whitewashed, hillside village has just been missed so... 'Allora, it looks like there's some walking to be done.'

You can get here from Málaga, about 40km to the south-east, and highlights of the train journey included a seemingly endless tract of citrus groves that nobody seemed bothered to be picking. 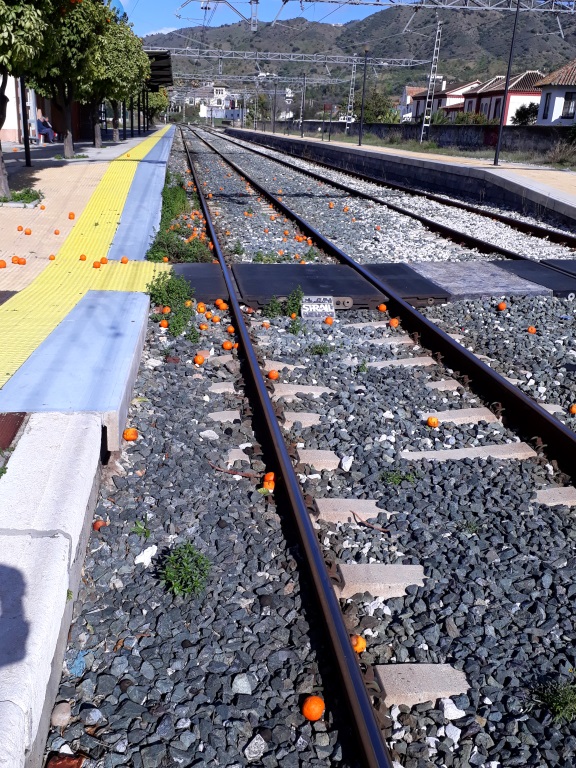 It's the same situation at the station and a couple of these will be trousered for half-time on the lug up.

Forty minutes from Málaga and every hour, you need to take the Linea C-2 to get here. Make sure you don't mix up with the Linea C-1 or you'll end up in Torremolinos, which isn't half as bad a day out as it sounds.

There's a relatively busy road to negotiate that will have you watching your Green Cross Code™s before an ascent that's not actually too much of a lung buster. 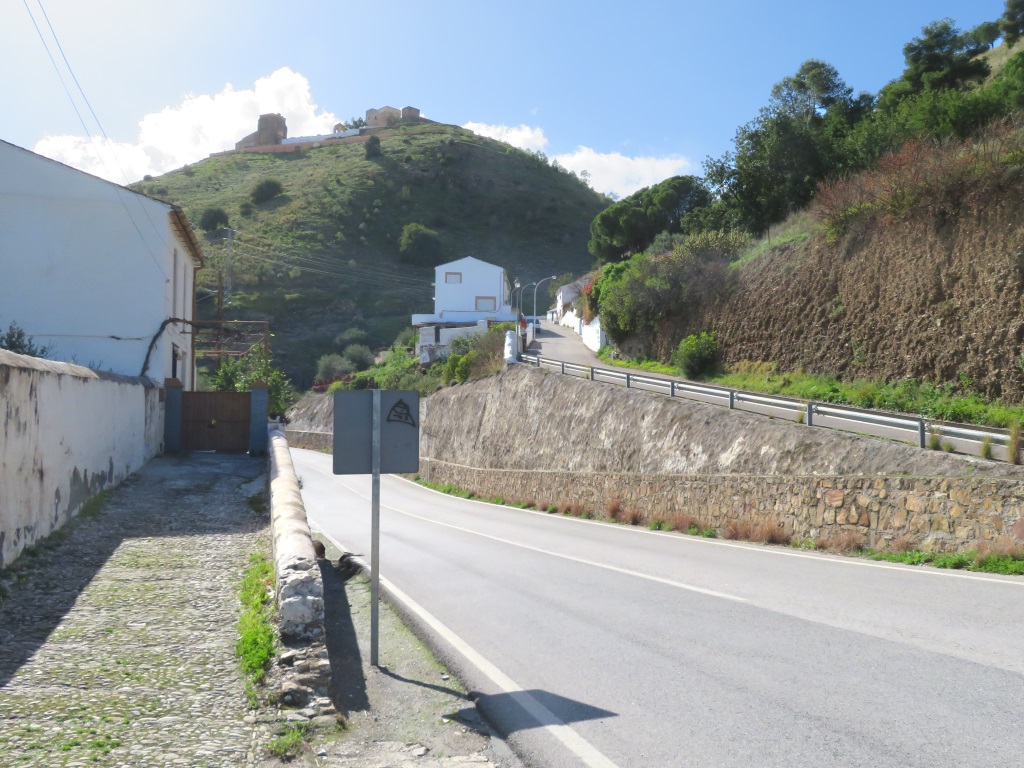 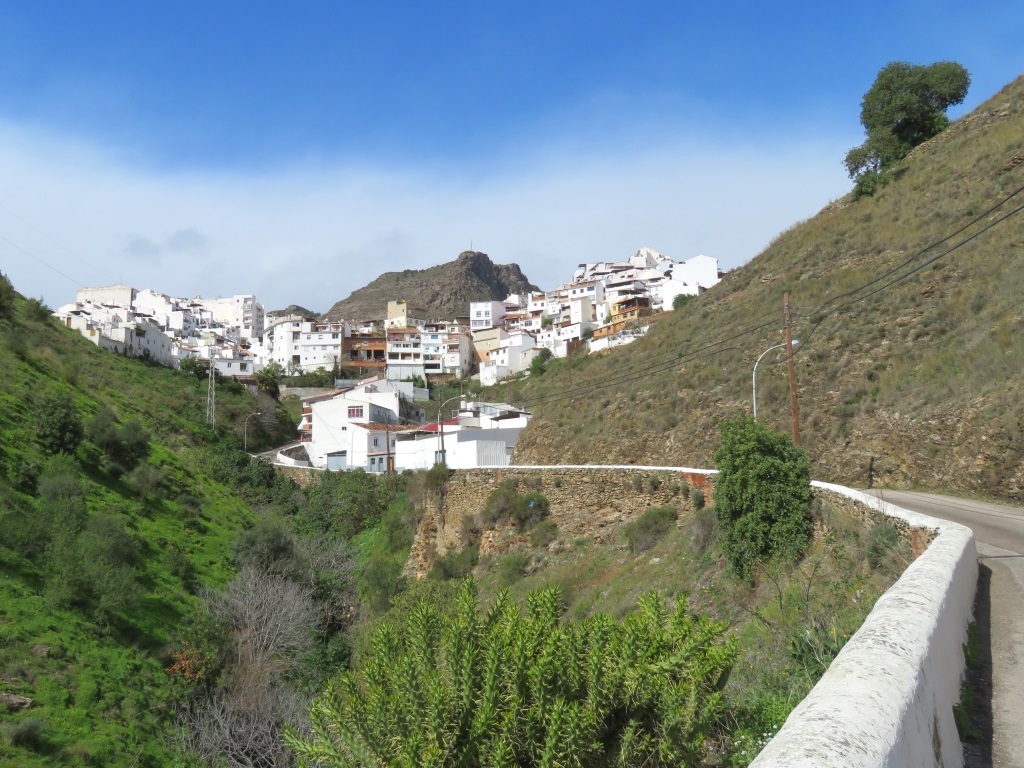 There's not a great deal happening at the Plaza Fuente Arriba and that fountain won't entertain for a full afternoon. 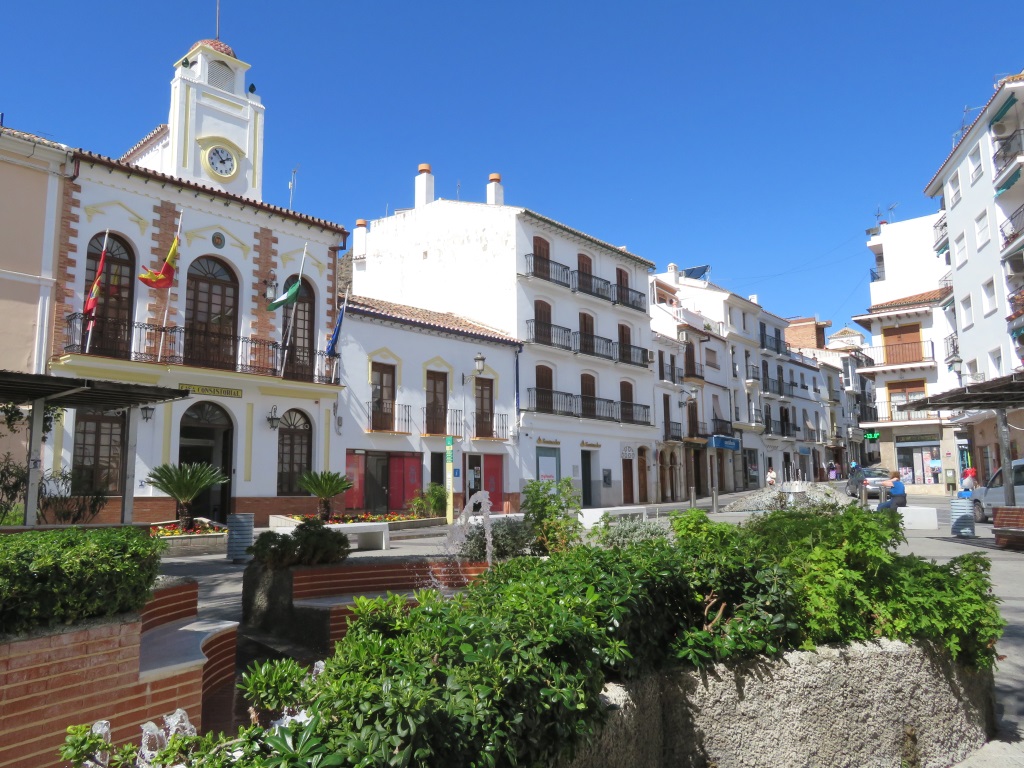 This might be early March and slightly out of season but they don't exactly look to be equipped for visitors?

There's a little more life further up on Calle Veracruz and a mildly rewarding viewpoint although this isn't quite so high up to be blown away, just yet. 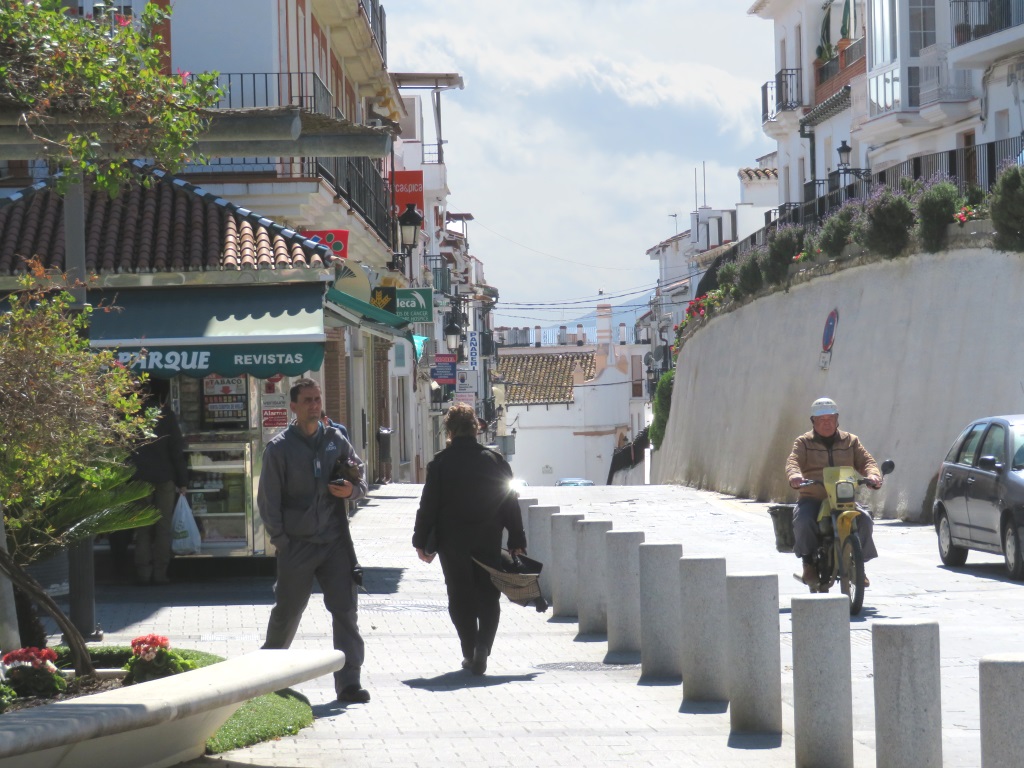 Once again, the panorama won't entertain for a full afternoon but a couple of options for a snack and evidence, perhaps, of a downside to living in Álora. You might want to pull up a chair...

Bob lost his caña and Sly her vino blanco when a sudden gust caused the canopy to collapse to the sound of a bomb going off. Reseated inside, a quartet of ageing ex-pats chat politely in between courses and awkward pauses with just the leading lady trying the staff in Spanish.

With not a single 'grassy-ar*e' from the other three, couple #2 decline another drink citing 'things to do' but they'll see them again tomorrow... 'Around 5?'

'Things to do' appears to be refusing to integrate and walking their small dog 50 yards back to their apartment directly opposite. Not that they were being followed, by the way, they just left a little bit later and that view was being enjoyed as they did.

It's like Groundhog Day meets Last of the Summer Wine only without the capers and they'll eat the same Russian salad and patatas bravas tomorrow with their only hope of respite being when their children grudgingly visit and they'll have to ask for a larger table, in English.

Funnily enough, that Russian salad might just come with capers as, potentially, does the Calle Omar.

Can you imagine going down there in a tin bath?

Freak gusts notwithstanding, big, rustic portions and a favourite with the locals. This definitely didn't get the nod because they advertise they speak English, no Señor!

Before you know it there's some phrasebook fun while the Spanish words for 'bomb' and 'wind' are double-checked.

There's more height to be gained if you're that way inclined with the view, this time, definitely rewarding. Here you'll find their football stadium although it's not thought that residents have too much trouble with the traffic on matchdays. 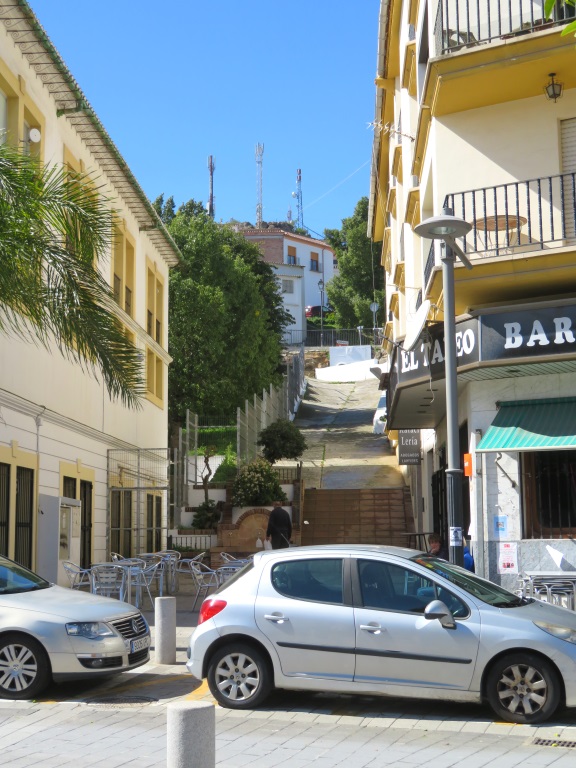 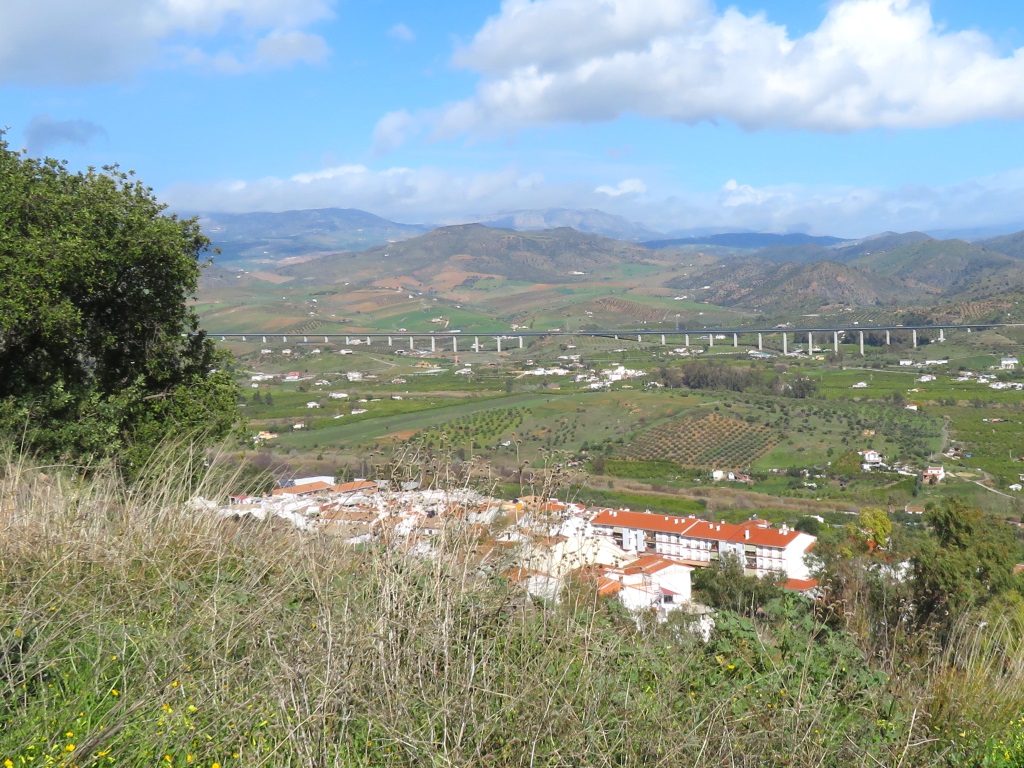 The mountains provide the backdrop for a setting that must be one of the most spectacular, if not the highest, for a kick-about anywhere in the world? 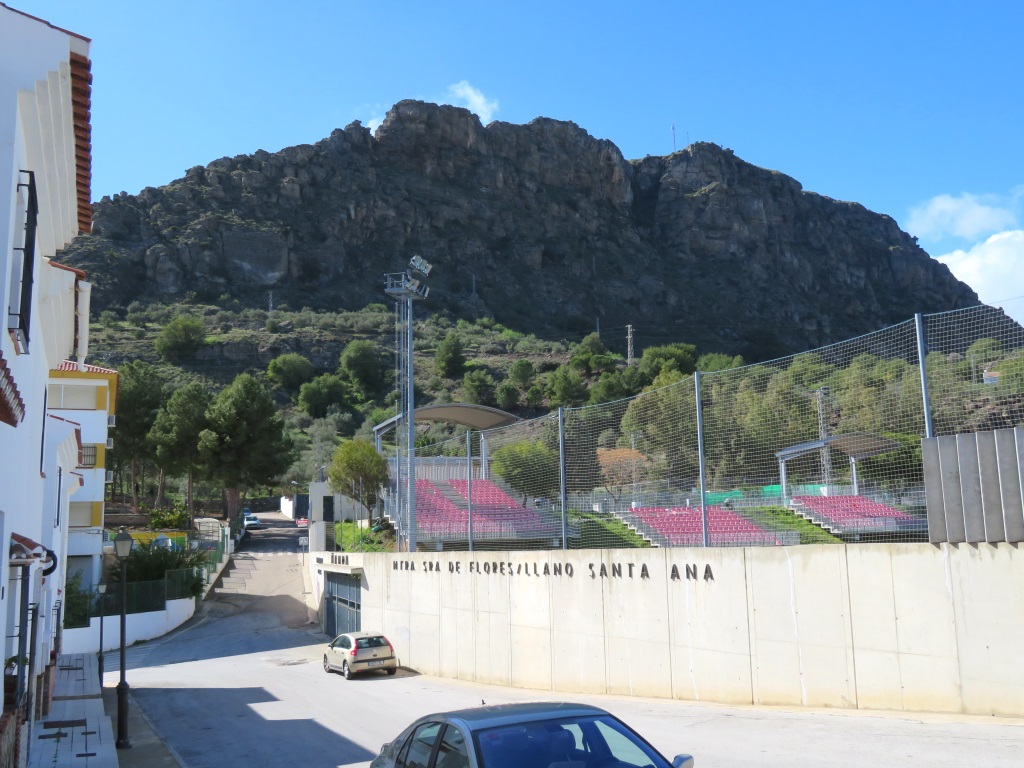 The Bolivian national team are said to do their summer training here and still complain about getting light-headed.

While those mountains are hardly the Himalayas, 10 miles north-west of here, they're home to a gorge that was handy for the hydroelectric. By the beginning of the 20th century, there were two power plants but no easy way to get between them.

Simple, construct a metre wide concrete path that's somehow supported by some steel in the cliff face and don't worry about the 300-foot drop, these guys have got a real head for heights.

Over the decades, the concrete crumbled and the steel got rusty causing a problem for the authorities... people kept falling off it. Following the fifth such death in 2000, the path was supposedly closed but that didn't stop daredevils[1] tackling the '  World's Most Dangerous Hike'[2].

It reopened in 2015 with something much safer, wooden and suspended but they limit the numbers, make you wear a crash helmet and you need to book in advance. It's such a shame that this wasn't known at the time because SlyBob would definitely have been up for that. Yeah right, that's happening.

[1] Or lunatics as they shall be called here.
[2] If you can watch that without flinching then you are, quite frankly, not human.

It's a steep but steady descent through the deserted backstreets with the only sign of life a couple of youths blaring music outside of a church. 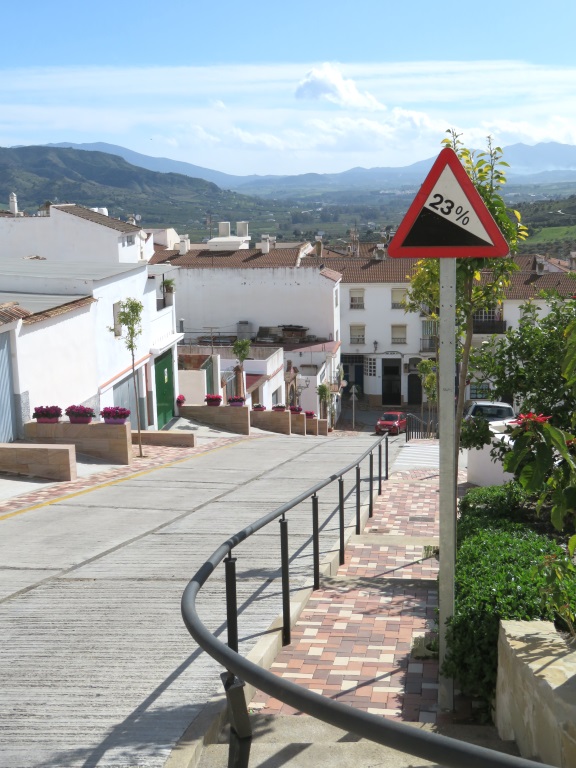 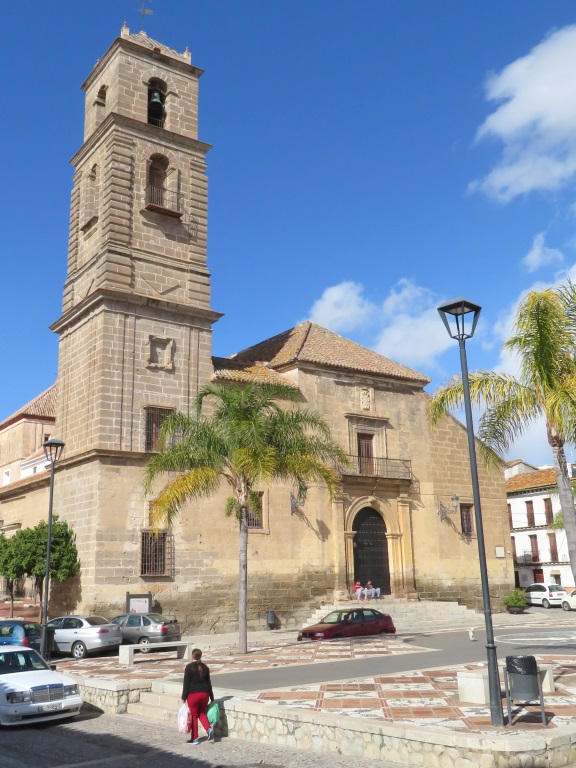 There's an option to head back up to the castle, which is the main attraction to the town and is all free, apparently. 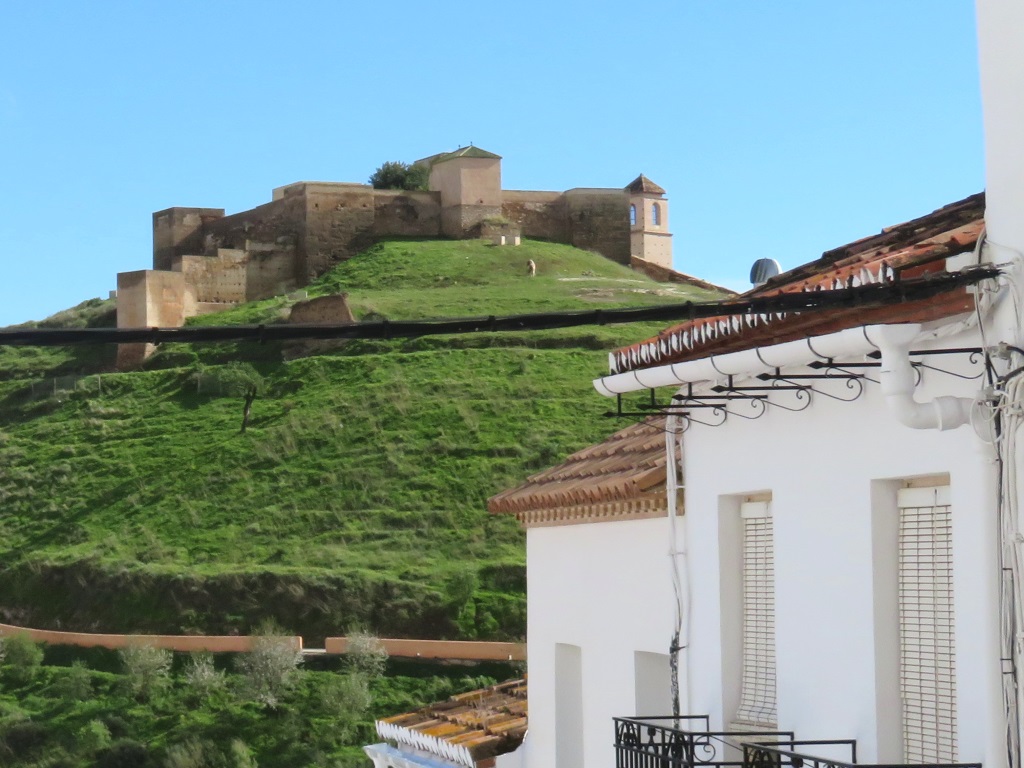 The heady heights have already been hit here, however, and that blast of wind earlier was a clue, the rain's coming in and there a train back to Málaga to catch.

Down near the station, the Manhattan entertainment complex shows no signs of life and there's a solitary apartment block with barred, ground floor windows and warnings of CCTV. 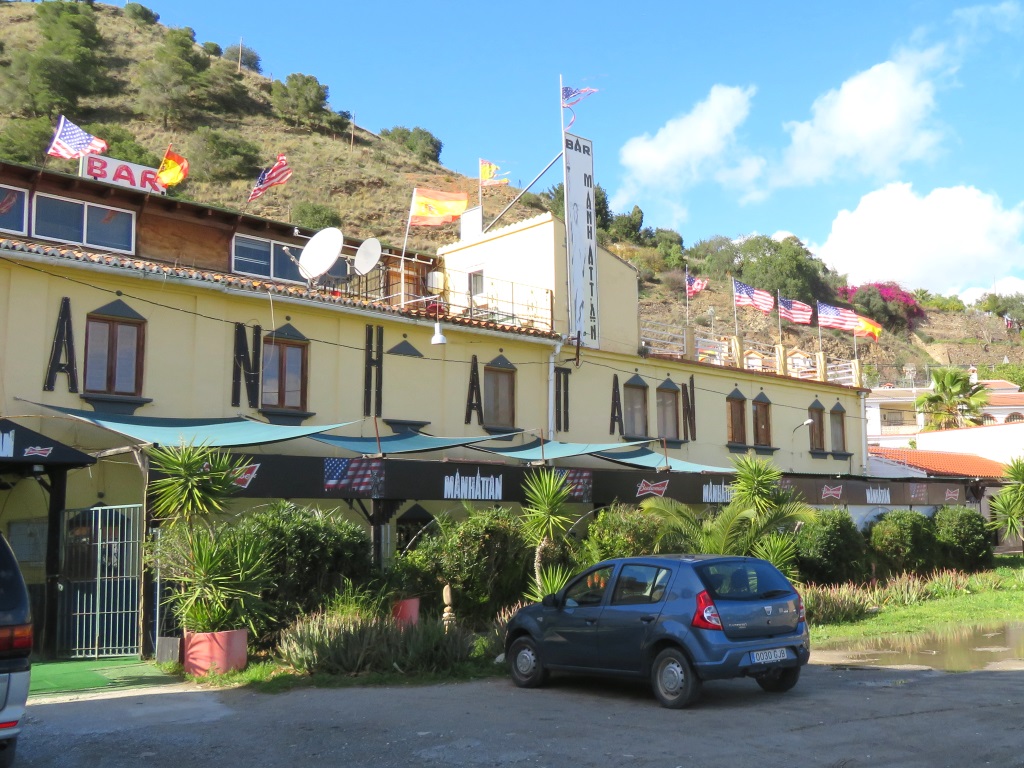 Three bored teenage girls try to amuse themselves on a swing and they're overheard to say... 'Allora, what is there to do now?' You want to get yourselves up there girls, the cast of Last of the Summer Vino could do with some fresh, young blood.

Now, do any of you happen to have a baño de estaño?