It's an expanse of lakes & wooded peaks with a large visitor center, popular for hill walking & cycling, alright, but how the heck do you get here?

Simple. Fill up on Liz MacGregor's shortbread in Aberfoyle then take the Duke's Pass north out of the village where this stretch of the A821 is one of the most scenic drives in Scotland, scratch that the UK, scratch that the world!

After about a mile you'll come across what was once known as the David Marshall Lodge, named after the chairman of the charitable trust that funded its construction. They've since dropped the 'Dave' but the Lodge Forest Visitor Centre is still the main source of information for the Queen Elizabeth Forest Park.

Forestry and Land Scotland handle felling and general access while Scottish Forestry are more policy oriented and the series of meetings to arrive at this setup would have made for a rurally diverting episode of Och Aye Minister, eh?

That means it's £5 to park up next to a pond, mind, although the captive participants of the big Go Ape™ might have something to do with that. There are none of the normal National Trust™ qualms at forking out, not when there's an impressive cataract just five minutes in.

There's a wildlife hide over a bridge where the entrance fee is fully justified with the likelihood of seeing some of these. 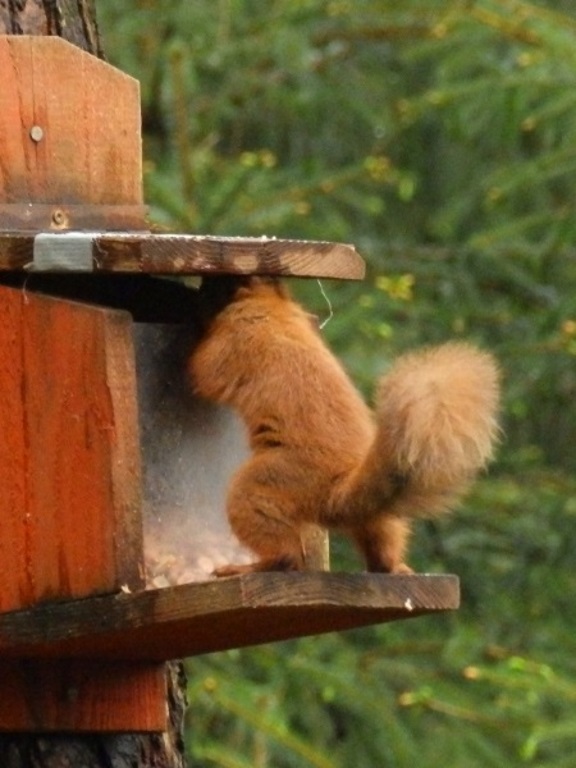 Or these although it's likely to be the same one.

The bird feeders make for a scene from Bambi with all of the tits, some of the finch and a solitary nuthatch[1] flitting in, not shown. It's the single reason for SlyBob now donning binocs to eye up the birds but not to the point where any lists are being ticked with 5 AM starts, this here is more than enough.

If you're feeling strenuous, there's a path up to Lime Craig for quite a view of the Trossachs, albeit one that's not nearly as good in photographic form. An athletic lady and her dog shot past on the way up and she's waiting for you at the top.

The Go Ape™ here had at one point had the longest zip wire in the UK. A combination of the wobblies and a reluctance to part with that many pounds means there's zero chance of Bob's business. Sly's slightly better, and less stingy, so is planning a visit on the next big birthday. See you back in the café, then, which used to be run by Liz MacGregor, remember her?

Previously purchasing some shortbread, it was advised to wait five minutes for a fresh batch. Hot out of the oven, these were the best ever tasted and 'We've had a few'[1] was cemented in ink in the visitor book's comments.

Imagine the disappointment on returning the next year to find the contract to cater had headed east and by that it's not meant Perthshire, neither, but Poland! Now, who doesn't like a goulash and a dumpling but late afternoon after a woodland walk?

There wasn't a krótki-chleb[2] to be had.

[1] Chrystal's or Maggie's are now the best, actually.
[2] The shortbread's back on the menu after they demolished and rebuilt the place, dropping the 'Dave' in 2013.