Totnes is truly tremendous but there's a problem. Deep down in South Devon, you may have accessibility issues but, if you do, there's a simple solution. Make your way to the spare bedroom, climb into the wardrobe and see what it is that the lion and the witch in it want...

But more on that in a minute.

A watery welcome awaits whatever your direction and that's the Dart, the river, of course. Totnes is where it just about turns tidal and your last chance to cross as it heads south.

The 19th-century bridge brings you in from Bridgetown, which is where people live, to Totnes itself, which is somewhere that you'll now love. 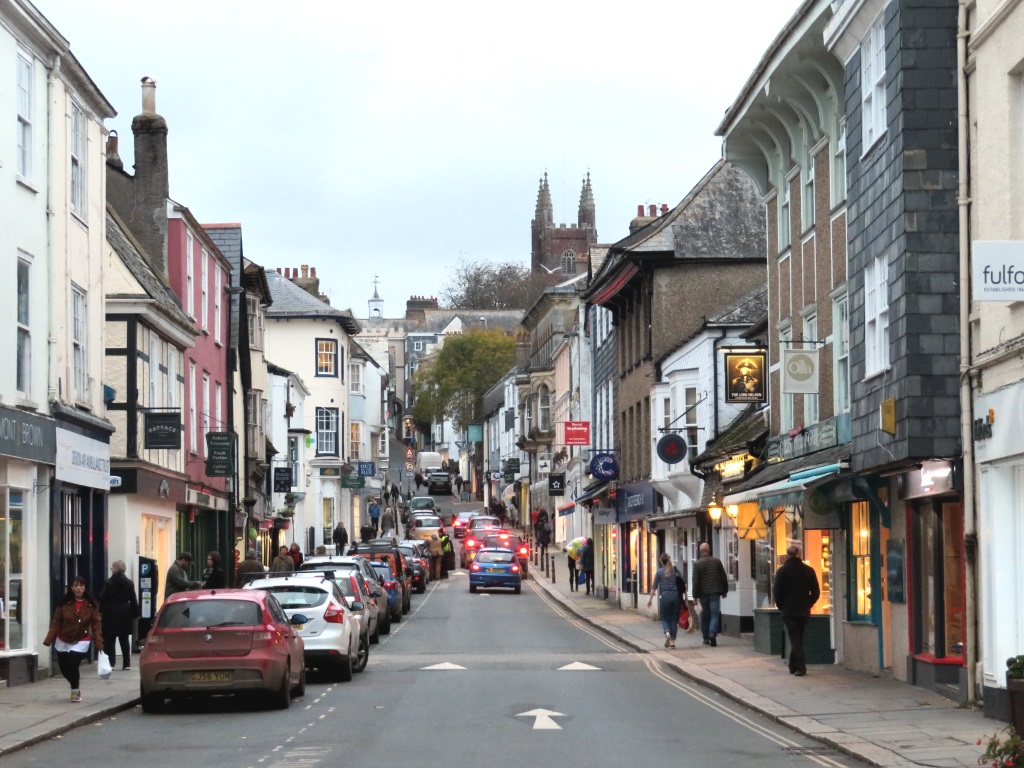 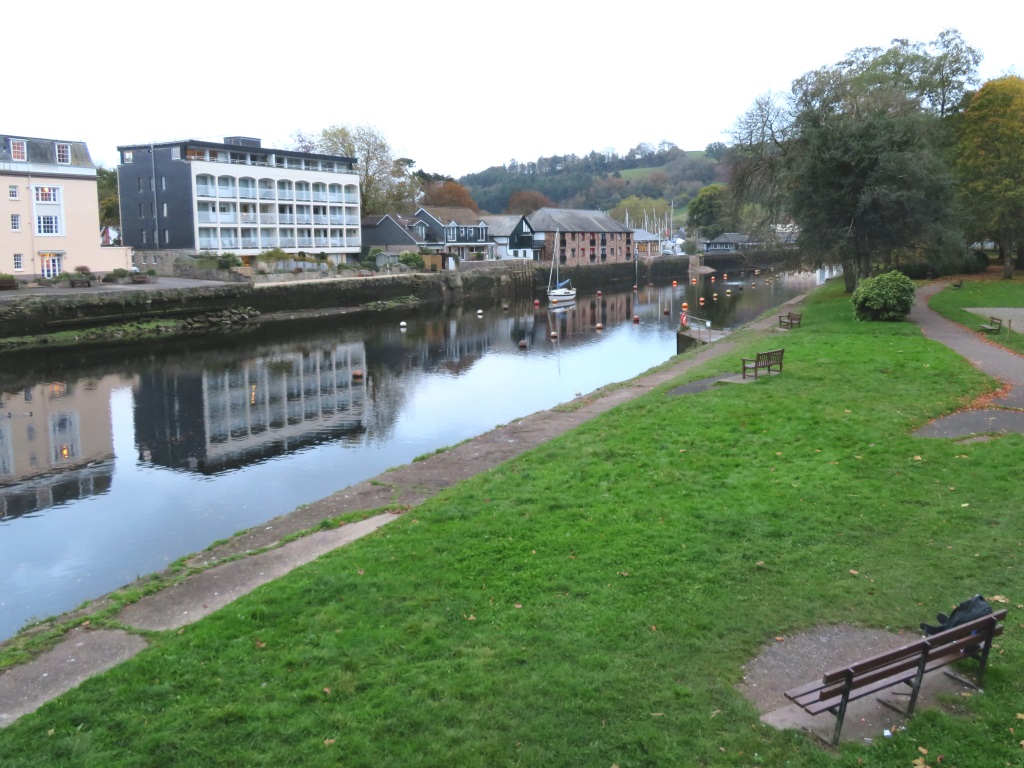 Below you is Vire Island and you can get down to it from the bridge. Totnes is twinned with the same-named town in Normandy, which is why there's a pétanque pitch on it, probably, or is it just because Totnes is, well, a particularly pétanque-y kind of place?

Formerly the Waterside Bistro 'in Devon', it's thought they figured you already knew that but they've stuck with the waterside bistro promise, which happens to be in, well, Devon.

They're a youthful and lively bunch in the beer garden outside and inside, it's poshed-up pub grub, really, but better than you might expect.

While it's a bit artsy and, dare it be said, 'New Age', the overall feel is kitschy and, with that, just a little bit rough around the edges. Unlike somewhere like Southwold, say, they're not trying too hard here and that extends to the uniform.

For a lot of young men, that's a scrubbed-up-on-a-Sunday version of  Swampy, remember him? As they morph into middle-age, this manifests as a thinning ponytail with a hat with a feather in it on it and they look like the kind of men who might whittle you something.

The place prospered as a port, of sorts, for cargo up and down the Dart and the warehouses were still stuffed full well into the sixties. They're largely bars, offices and apartments now, obviously, although some people still insist on calling them flats. 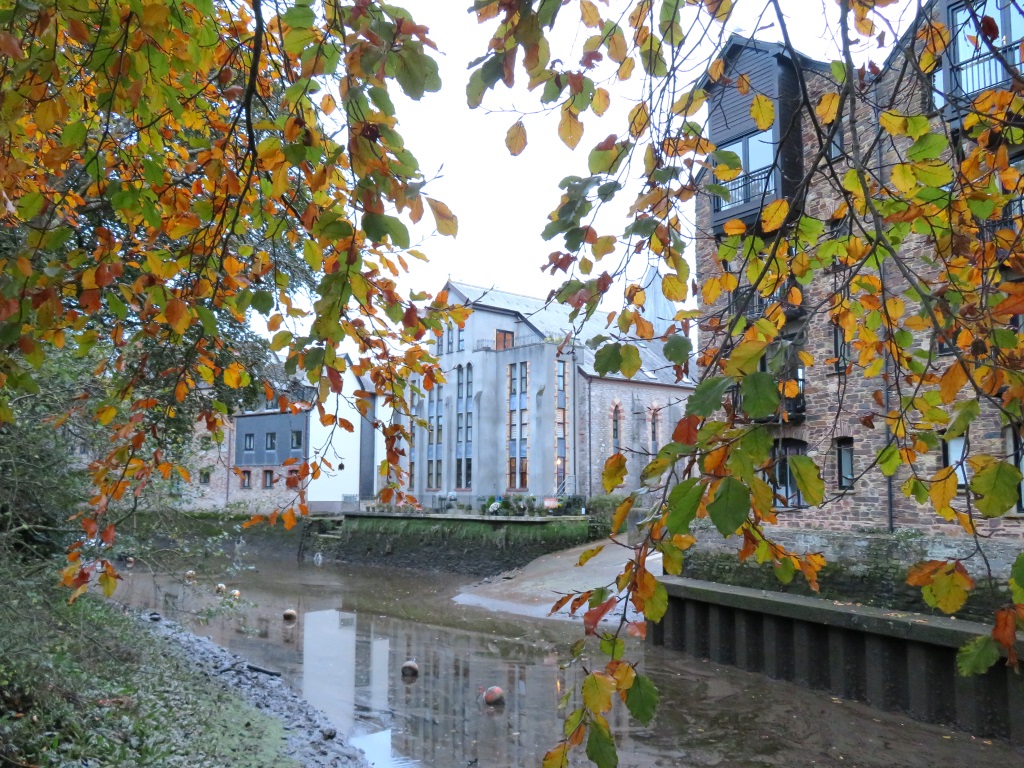 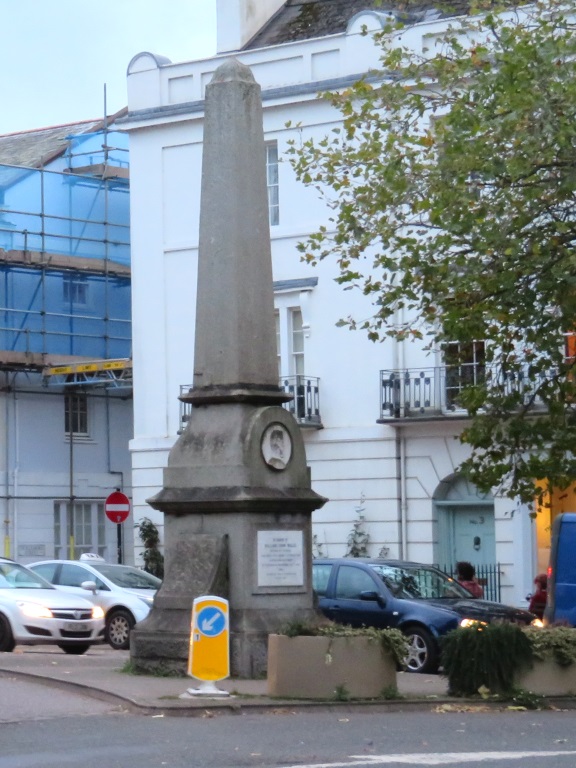 The monument near the roundabout at the bottom of Fore Street[1] is to William John Wills, a local lad and Victorian explorer, and you'll have as much luck crossing the road in rush hour as he had crossing Australia.

[1] It's a Cornish language thing and every town and village in the South West has one. It would be called, much more unimaginatively, High Street where you live.

Just next to the roundabout with the monument, you don't have to be staying here for them to nourish you nonetheless. A tip, turn left into the lounge where the draught beer is better than in the bar where a pair of languid locals sip Doom Bar™ while watching their adopted team, Arsenal.

The restaurant is in an old stable block and it's carvery only on a Sunday, they say. Having been here before, situation-wise, that beef's been sat there since 12 PM but a lady on a nearby table beckons... 'No it's not, ask him for the à la carte.'

The waiter denies its very existence so that means the head chef's knocked off early and the Waterside Bistro it is then.

Fore Street heads gently up and has a touch of a Tuscan hillside town about it. 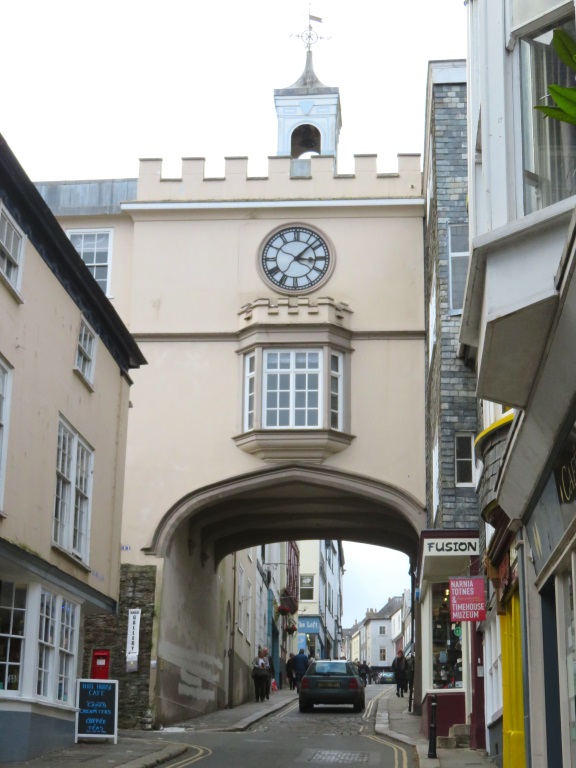 Most of what you can see is listed, building-wise, and a lot of it goes back to the Tudors including the East Gate Arch, which relatively recently, suffered a devastating fire so the faithful reconstruction makes it more 1990s than 1490s.

Beyond the gate, Fore Street turns into High Street[1] and the 15th century Church of St Mary is a sight. But isn't that a mixture of classic and Neo-Gothic architectural styles? 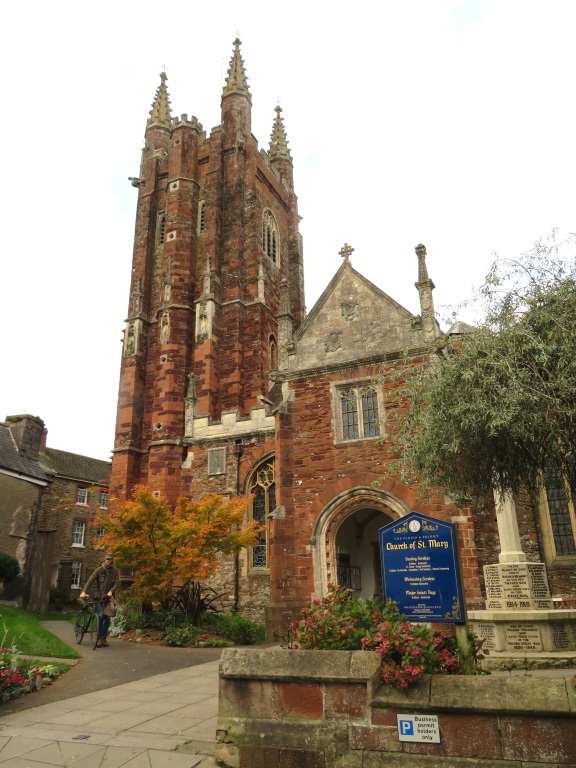 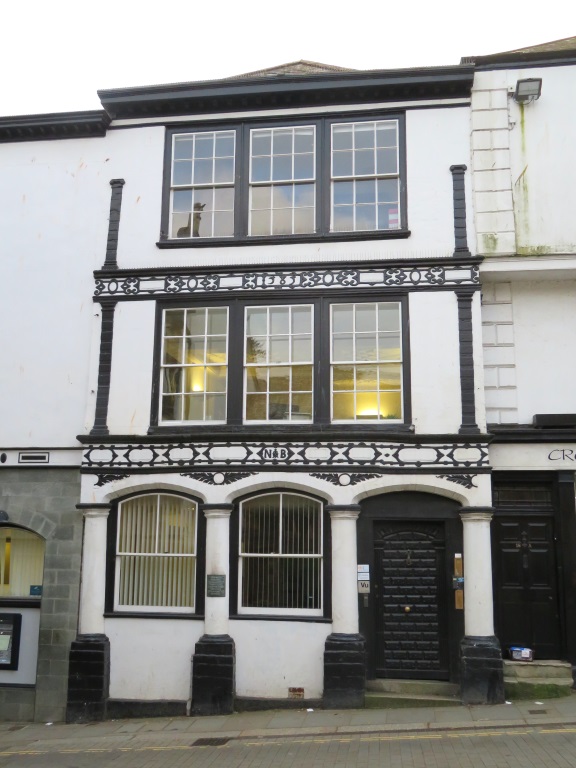 It certainly is following a complete Victorian restoration that wasn't to everyone's taste at the time, they say. Just opposite is the former home of Ann Ball. Ann Ball?

The building decoratively advertises itself as 1585, which was when Ann moved in here with her husband, the then mayor of Totnes and a wealthy fishing merchant to boot. When he kicked them in 1586 she inherited a pile from the pilchards and one Thomas Bodley came-a-courtin'.

With the former mayor still warm, she was up the aisle, again, before the year was out and with his name now on the joint account, the funds went to furnishing a library in Oxford and the Bodleian was born, no less.

Fascinating stuff, for sure, but that's all to be had not unless you want to know about the Pokémon GO™ characters that hang around the plaque that hints to this, right kids?

[1] It's a Middle English language thing and every town and village where you live has one. It would be called, much more imaginatively, Fore Street in the South West.

Because Totnes grew up around a hill, there's bound to be a castle here, right?

Totnes Castle, of course, and let's recoup some of that capital outlay with English Heritage™ having been so beguiled by Belsay. Looks like it's weekends only, though, in November so the best view is from some private housing that you're not really allowed in. 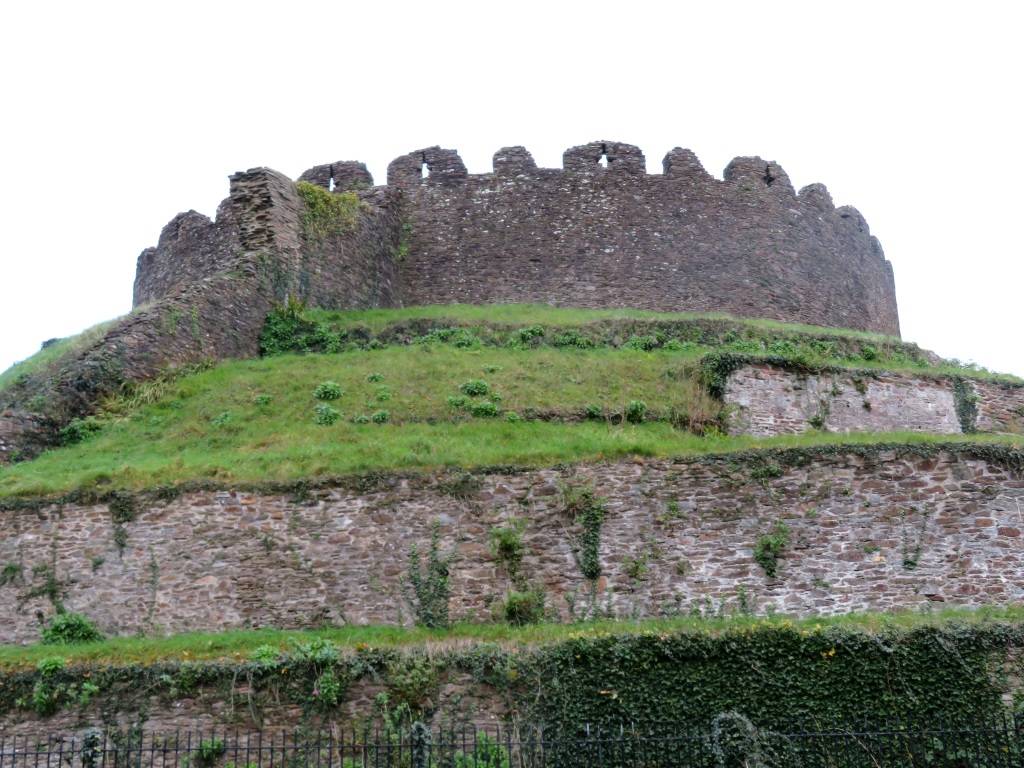 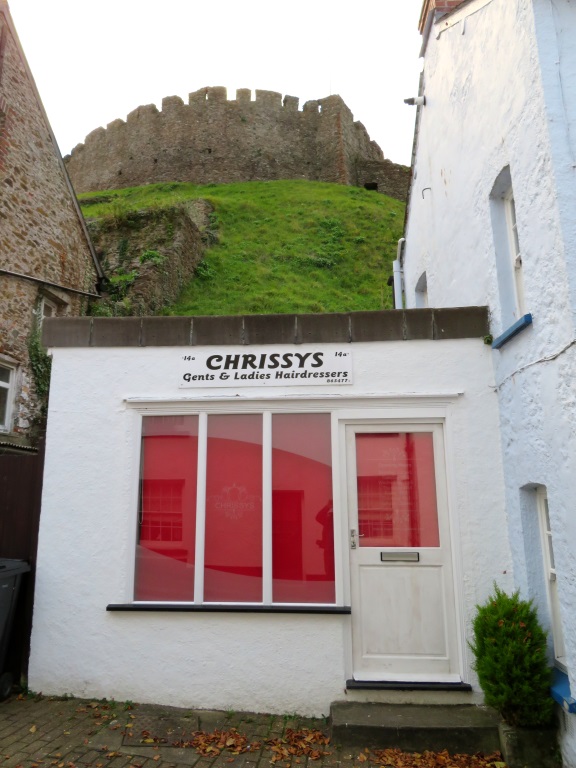 You can always get a haircut while you wait but it seems that they're closed as well so by the time the castle reopens, next March, Bob might be able to fashion a ponytail, of sorts, and get to fit right in here.

Meanwhile, back on High Street, there's more of the Tudor at the Butterwalk, so called from the protection it once offered the dairy stalls. 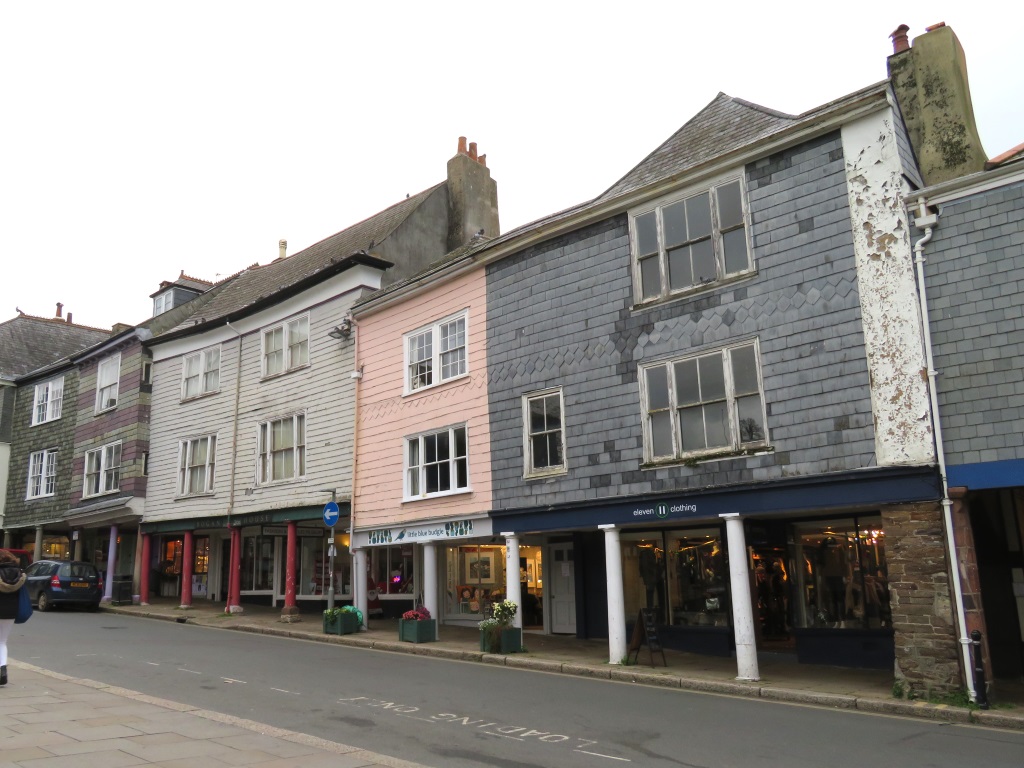 The shelter's still welcome for the cafés but if it's cheese you're after, these days, just opposite is the marketplace and every third Sunday of the month they ditch the general knick-knacks for good food, they say. 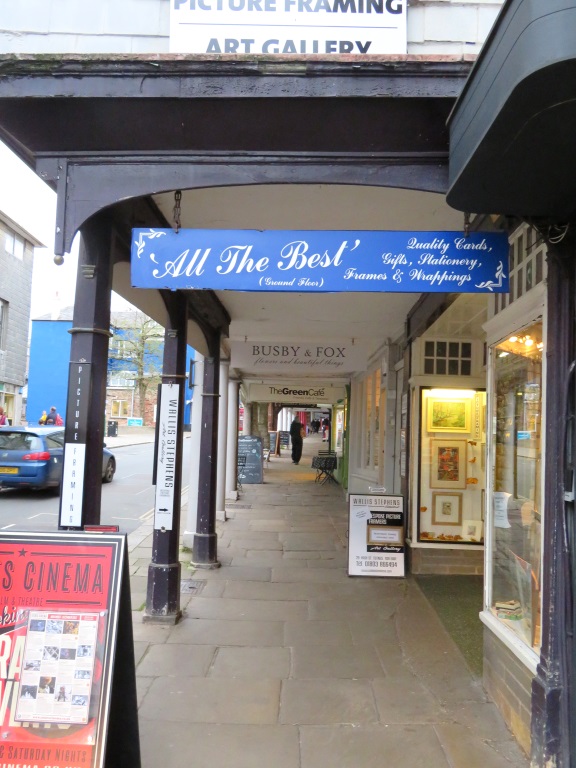 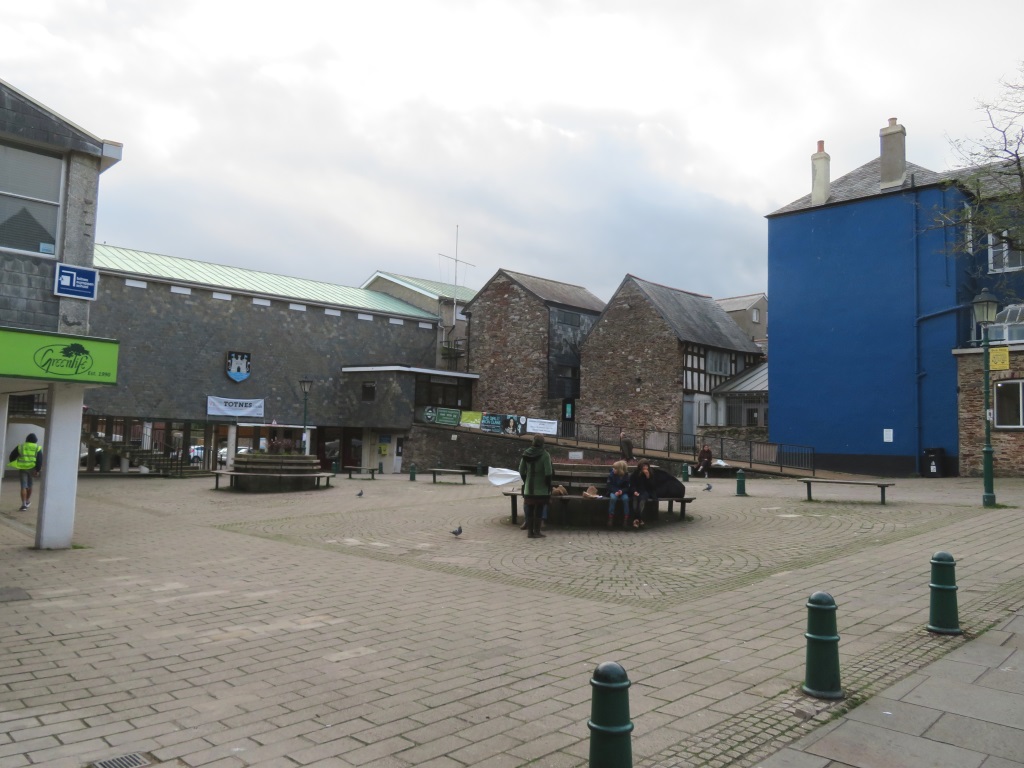 There's all of your standard farmers' market fayre as well as a good line in Caribbean patties and chicken on a stick from the Far East. As for the patties, Jamaica? No, Sly ate one of her own accord[1]. As for the satay, Jakarta? No, you've already been told, she walked up.

Just about where it says it is and where the offerings are definitely of the 'crafty' variety. They don't just do their own, though, there are up to 80 available at any time and can even be enjoyed outdoors, in November, with all the smoking bohos.

They don't do food but will co-operatively advise where's good to eat and once, just for once, there isn't a Courier font in sight.

Upstairs from the Brewing Company, this had to choose between being a café\restaurant combo or a live music venue. The gigs won out and it's a fixture on the local circuit and also does DJs whatever it is that they do although that's very definitely an age thing.

High Street bends round to the left to become the ' Narrows' but this is no place for the narrow minded. 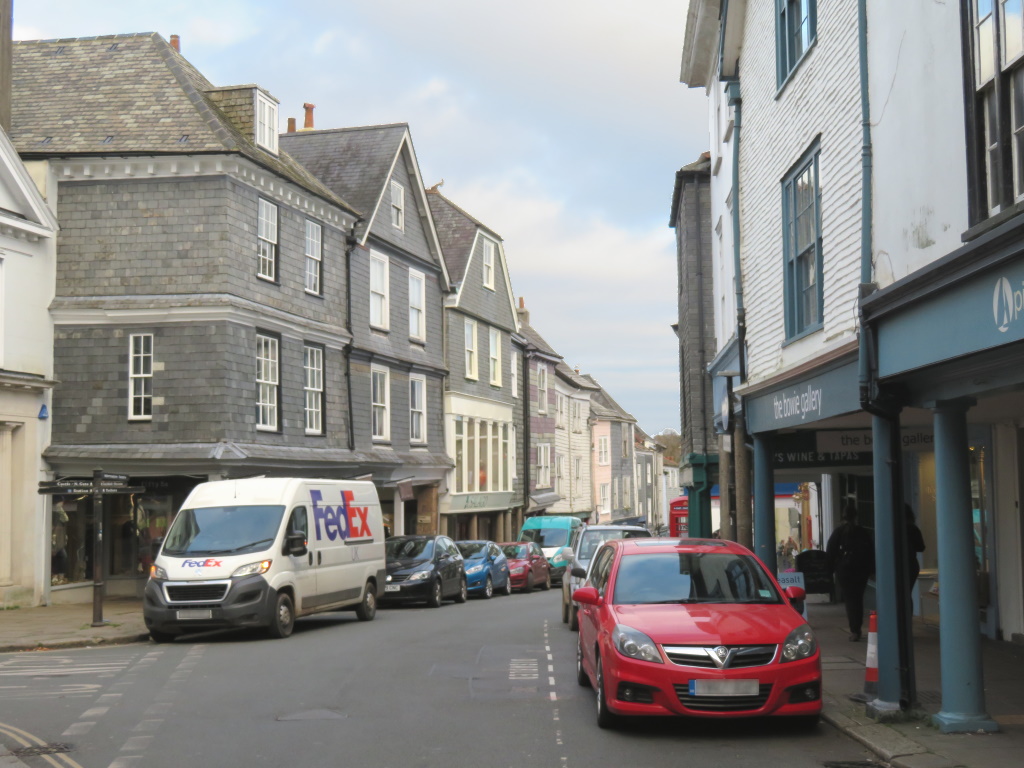 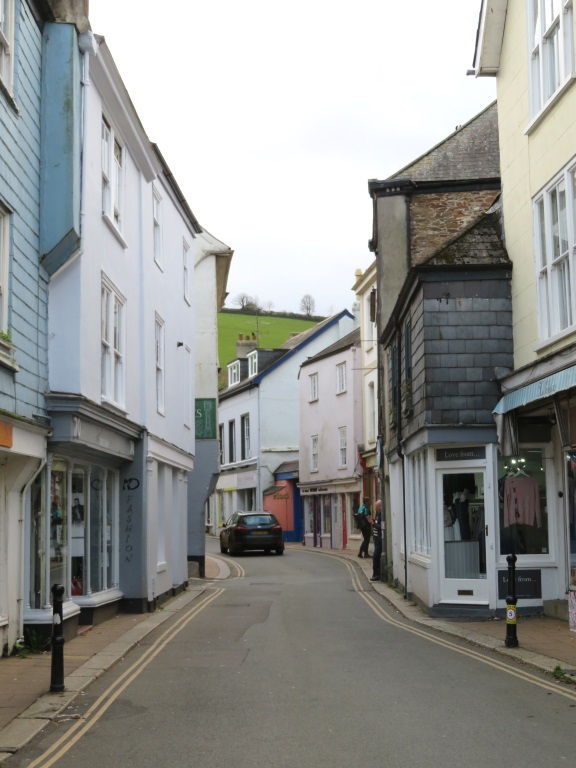 This is why the locals joke that Totnes is twinned with Narnia where it's all recycled furniture, dream-catching crystals and more varieties of red kidney beans than was thought possible.

Along here you'll find the country's only zero waste shop and they even had their own currency to keep the spending in town and so far, anyway, they've managed to keep Costa™s at bay.

Sometimes you have to be careful, very careful. If somewhere falls below these, admittedly low, expectations then it's best not to mention rather than mock and no one need ever know, right?

Very occasionally, however, it has to be considered if the criticism is better off shared and so it is with Cafe Mumbai because this was... THE BEST CURRY, EVER!

Two minds are in about going public because a table will be wanted on the next visit but that's based on the presumption that there are more than half-a-dozen of you taking note of this nonsense.

You'll find the Chicken Mooshori in the 'Chef Kobir New Dishes' section of the menu and while the Lamb Begun wasn't bad, this was, quite simply, superb. Slow-cooked 'homestyle' as told by the chef's wife who, himself, was a little too busy to accept a chapati on the back.

'This is much more typical of what the family eat at home.' You say you're closed tomorrow so where is it you live again?

As the shops start to run out, carry on up to a pub that may or may not have since reopened but why do this you ask? 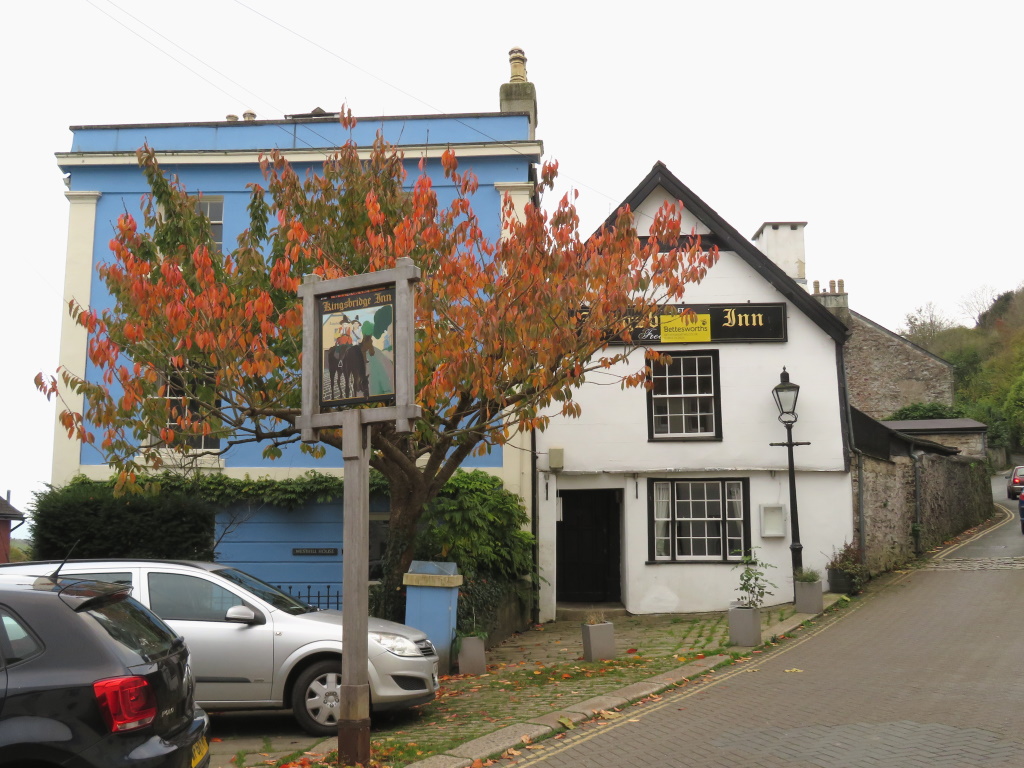 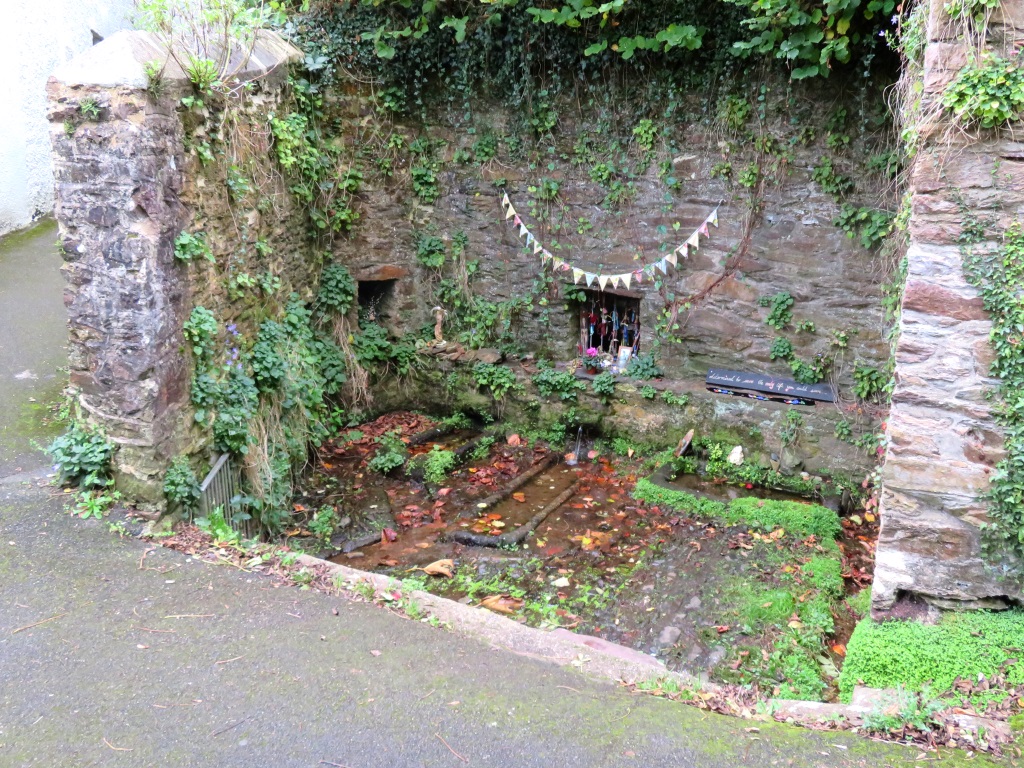 Because, with the castle also closed, the only thing that's simultaneously of a similar historic interest and not can be found behind the boozer. The Leechwell, three separate springs emerging at the same point and whose health-enhancing benefits have been known for centuries.

When someone found a triangular pool behind the ancient troughs in 2003, the New Age nuts went, well, nuts as evidenced by the ribbons and the trinkets. What with the three springs, the three paths that lead here and the three points of the pool, that makes for a trinity of trinities! Whatever that is!

In 1925 a pair of wealthy philanthropists bought the run-down Dartington Hall Estate, a mile or so north-west of town. They created, what's now considered to be, an experiment in 'rural reconstruction', whatever that meant, and all with an eye on the arts, whatever that entailed. 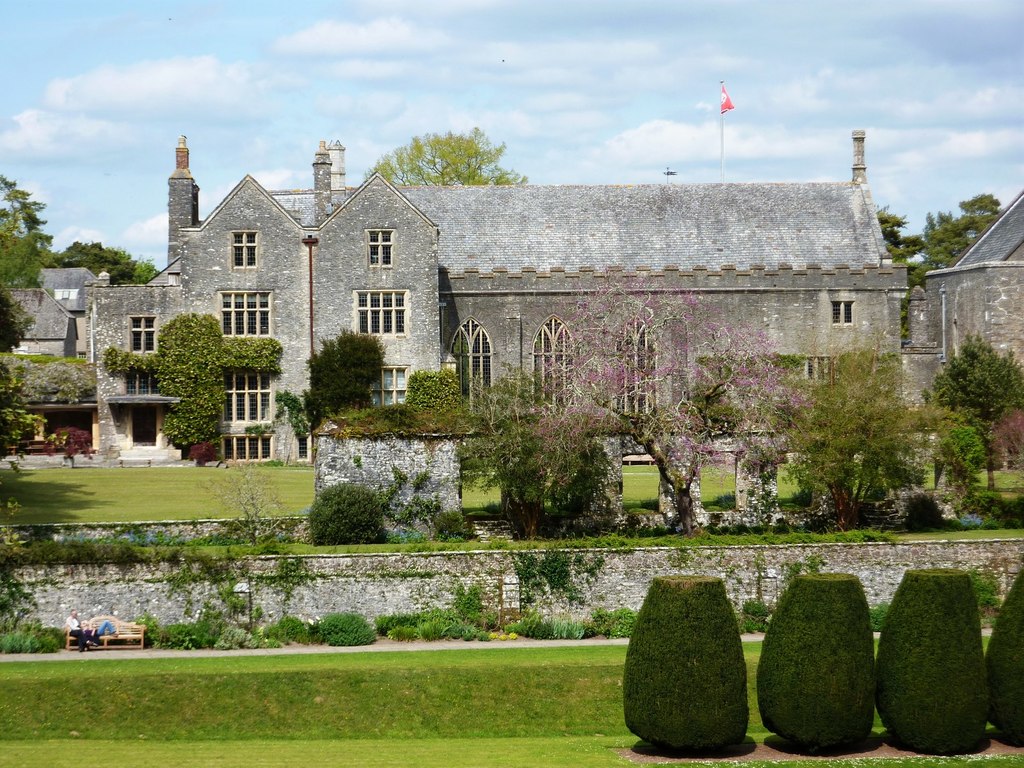 This communal setup also included Dartington Hall School, which would become Dartington College of Arts in 1961 with proper degrees and everything. This lasted until 2010 when, despite a protest march, the quirky college moved to Falmouth 'University' and education here ended.

It's largely down to the school, or rather its reputation, that led to the influx of those with a whiff of the patchouli to seek out creative, alternative lifestyles or what brought the hippies here if you'd rather.

They're still coming today thanks to the Dartington Trust running the Summer School of Music and Schumacher College, another educational establishment that sustains itself with short, ecological-oriented courses.

They're not the only trust assets that have been capitalised, the hall runs as a wedding and conference centre these days and on the way into the estate, there's some quite posh shops.

No time to linger here, however, back in Totnes there's an appointment with the best curry ever and the experience will later be interpreted in dance. Who knows, it might even be juxtaposed with something?

Hey, when in Rome.