Here is over 1,000ft up at the 'Eastern Gateway to the Cairngorms', the 3rd coldest place in the UK, they say, making this place more Brrr-mar, eh? 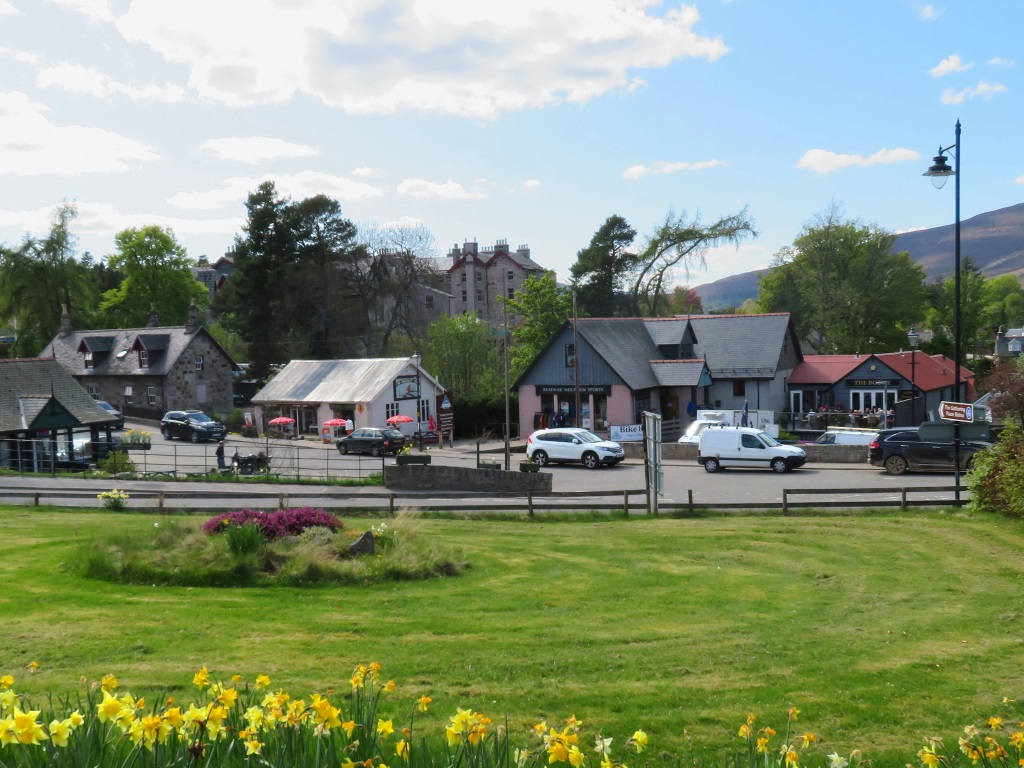 The A93 makes for a rollercoaster of a ride in and the continuing good weather means this is double the average daytime temperature for late May so no need to double up with any Arctic apparel.

This much, though, is already known by monitoring the climatic conditions via a real-time feed from their state-of-the-art weather station. 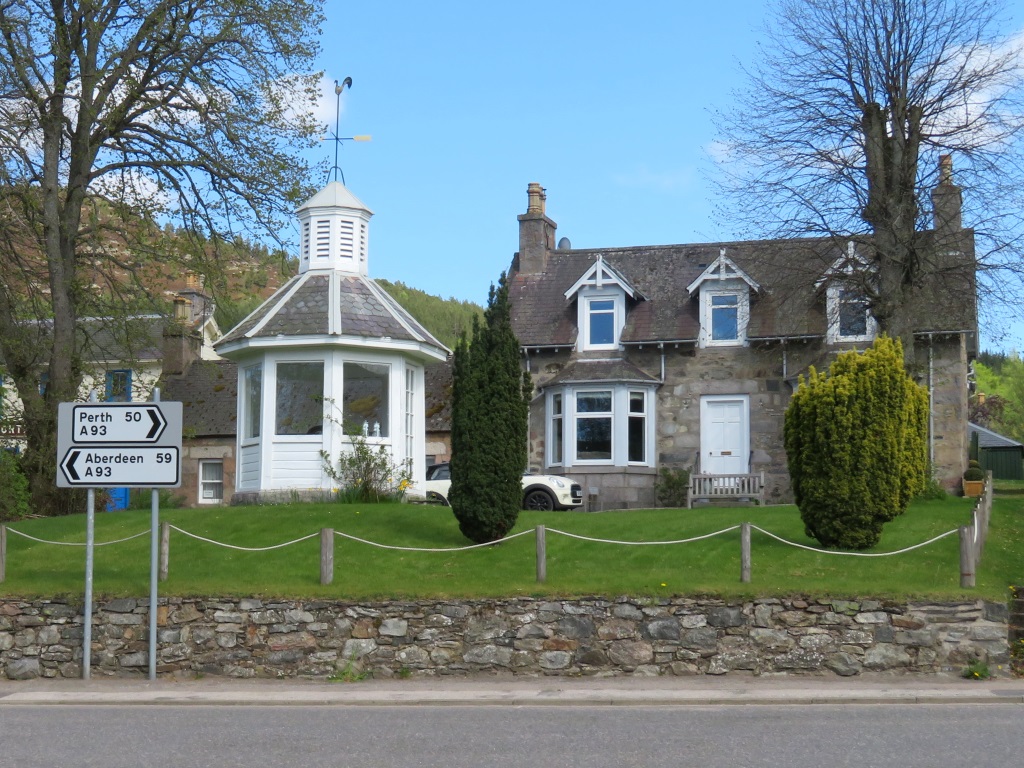 That's a joke, of course, but this wooden structure has been used to measure all things meteorological since 1855 although it's not thought to still be in use. It is, however, responsible for recording the joint lowest ever UK temperature during January 1982.

-27.2°C since you ask that, positively speaking, is what you might expect to see today in the Seychelles, say,

The bridge over Clunie Water, which can be a torrent when the ice is melting, leads to Braemar Mews, more of a modern, shopping parade, really, or at least it was. 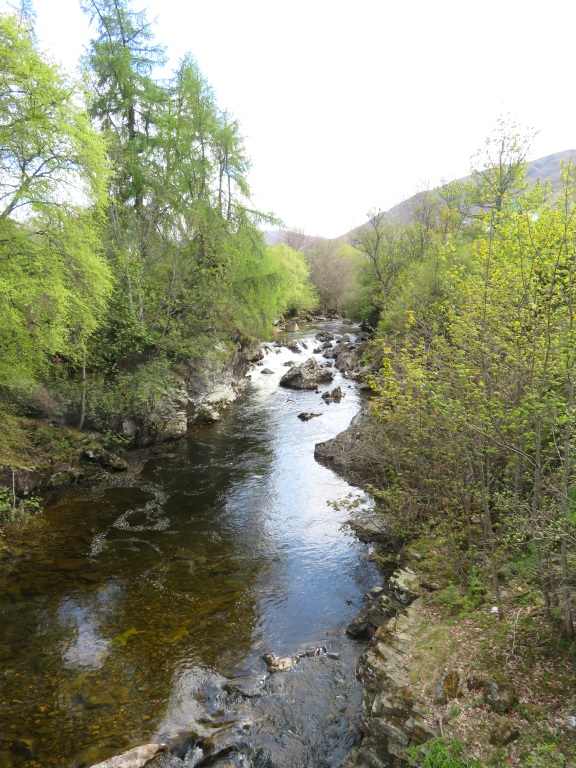 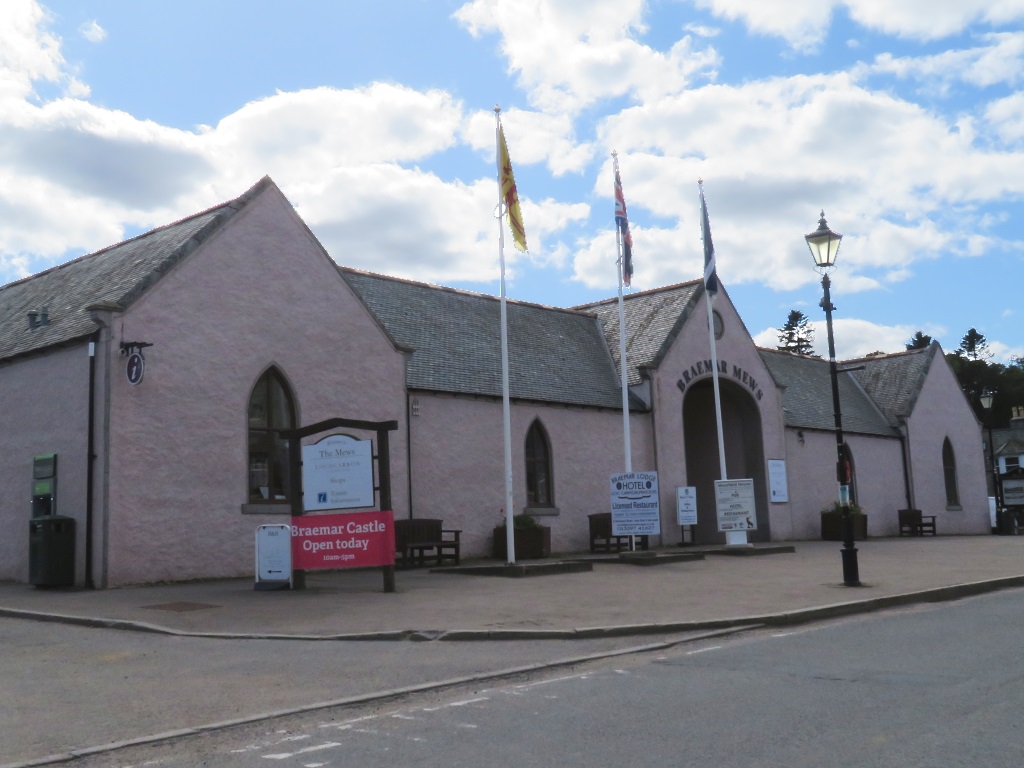 Former home to Braemar's Visitor Centre and a variety of retail best described as, erm, 'niche', recent trippers advise that the shutters are now up.

Shame that since the opportunity for a frothy coffee and the kitting out with some custom kilt wear has expired although the peddling of spiritual crystals in these parts was always, at best, ambitious.

You may have already noticed more than a fair share of tartan knick-knack providers. 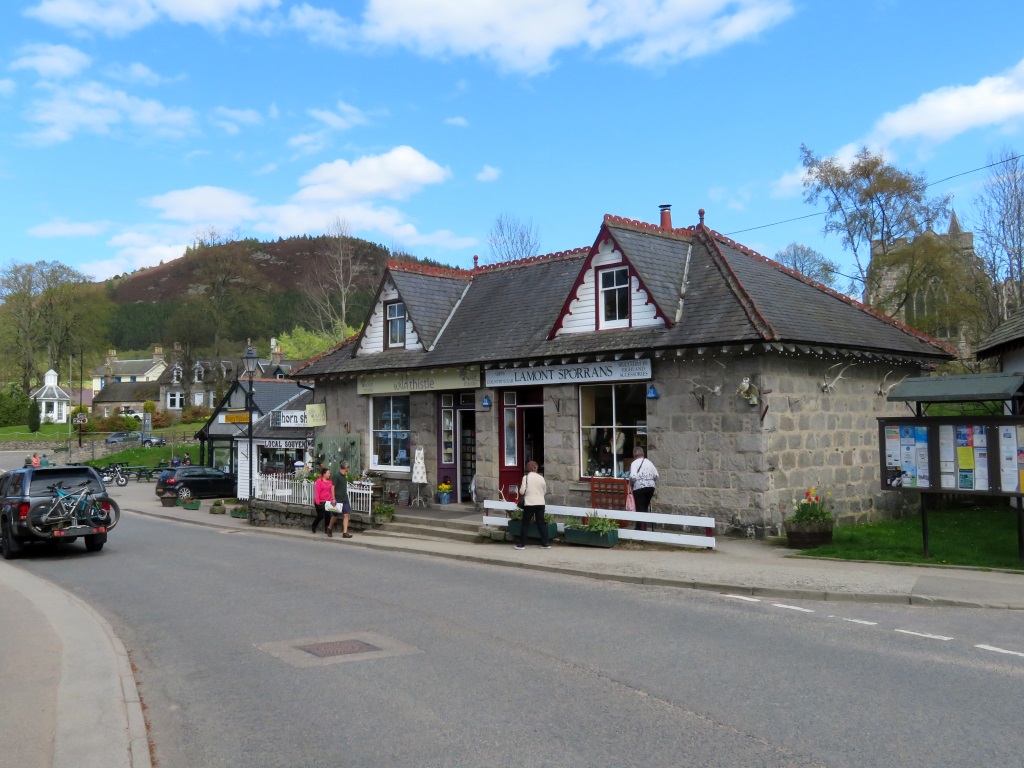 This one is somewhat more specific and specialises in sporrans so yes, it's already evident that Braemar is a little bit, ever so slightly, that kind of place.

When Queen Victoria visited in 1844 to watch the Highland Games, she was given a tartan rug to keep the chill out and that's how tourism was invented in Scotland, sort of. 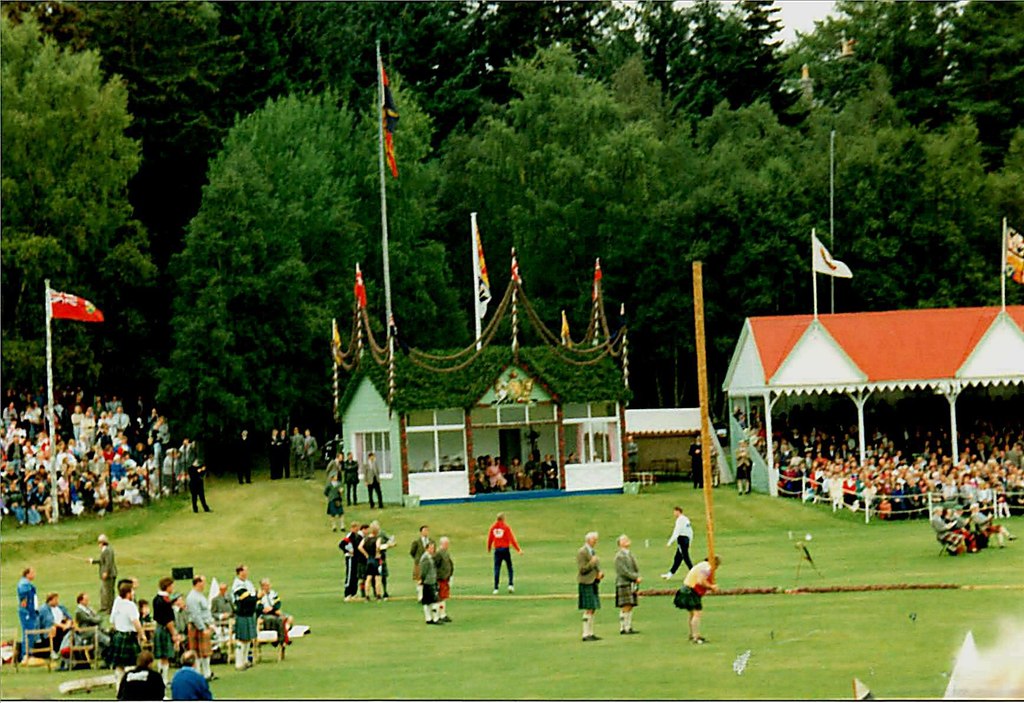 Clans had been gathering here since the 1000's, they reckon, but the 1746 Act of Proscription put an end to the fun and games.

When the 'law' was lifted, a little under 40 years later, the tartan took some time to return but in 1832, Braemar became what Athens is to the modern Olympics.

There's a new, permanent Exhibition Centre if you're here out of season but the only things being tossed, unless it's early autumn, are the capers, in the salad, in the café, possibly.

You get here by heading down Mar Road and hidden in the housing on the right, there's a sighting of the much rarer silver eagle. 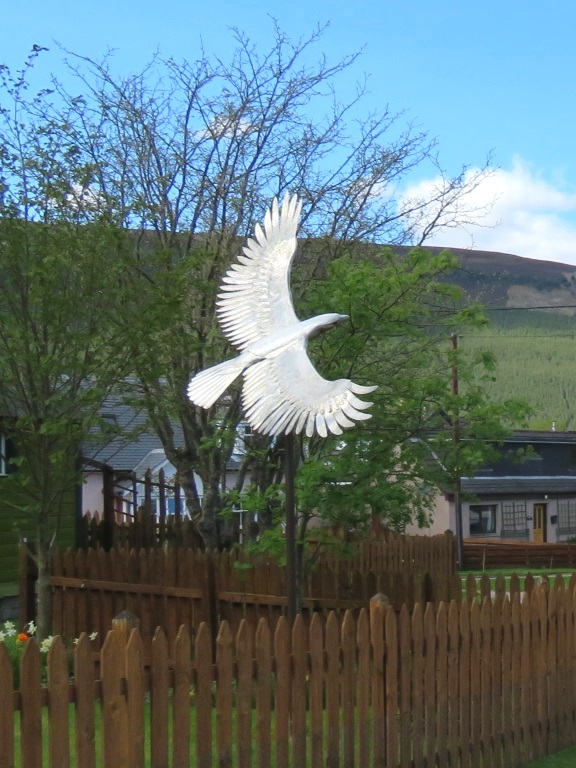 Nice to see an effort being made there but the exertions are off the scale in September when the cabers are out.

Following her royal visit in 1844, it wasn't long before swarms of Victorian toffs started to arrive. All top-hatted and tittering at the word 'tossing', no doubt, they came with the new railway, well, not quite. 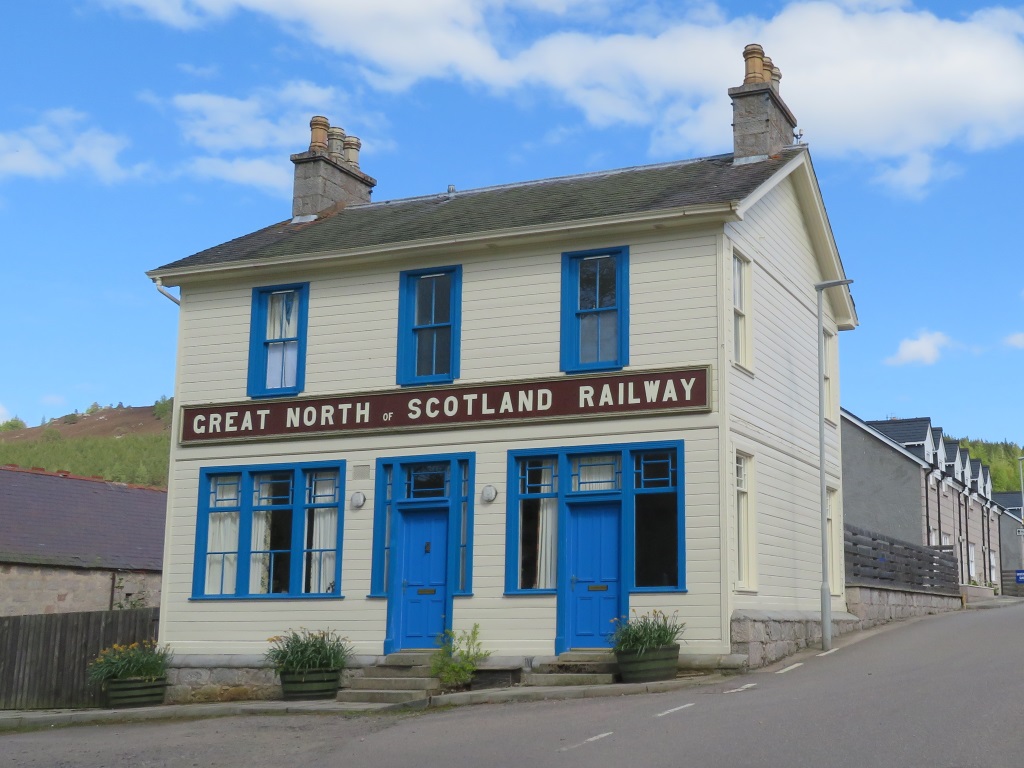 The line never made it here, you see, which is no surprise, given the elevation, and plans were eventually scrapped with the outbreak of World War I.

Before that, Vic was said to have been far from amused at the prospect of what she saw as a potential invasion of the Balmoral Estate just eight miles away... all 50,000 acres of it!

The best they could do was a branch from Ballater to Bridge of Gairn from where it's quite an uphill haul on a penny-farthing.

Kindrochit Castle is thought to be the earliest fortification in the area although not that much of it remains. Don't knock it, Kindrochit, it can be found behind the free car park in the form of some just-as-free 14th-century ruins. 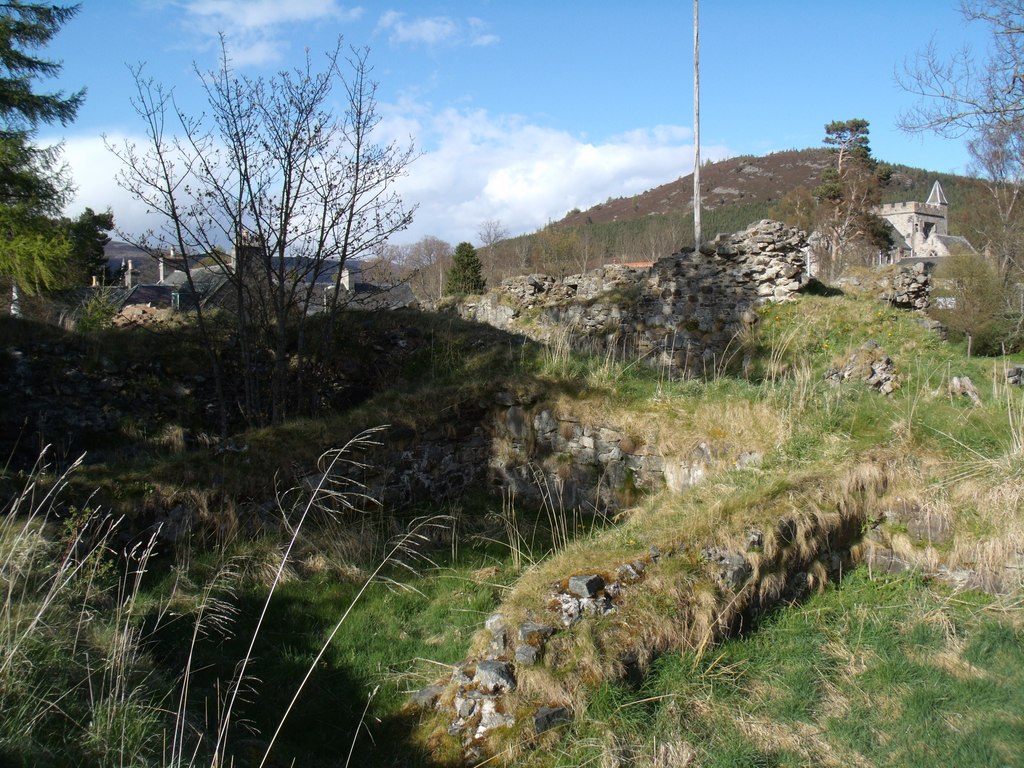 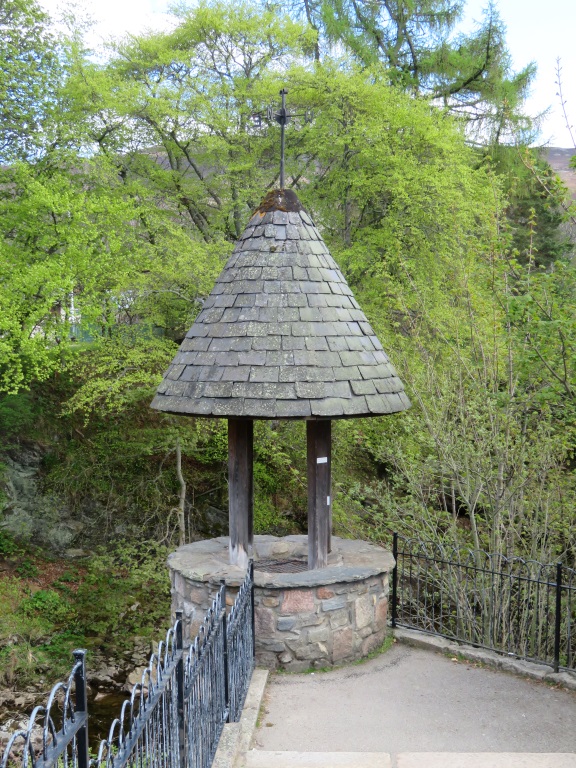 It stands guard near this well at the strategic crossing point over Clunie Water and protected the settlement of Cinn Drochaid. That, by the way, simply translates as 'bridge end' but sounds so much better in Gaelic, don't you think?

Unlike Kindrochit, Braemar Castle can only claim early 17th century but there's a lot more of it still standing despite them setting their own place ablaze in 1689. 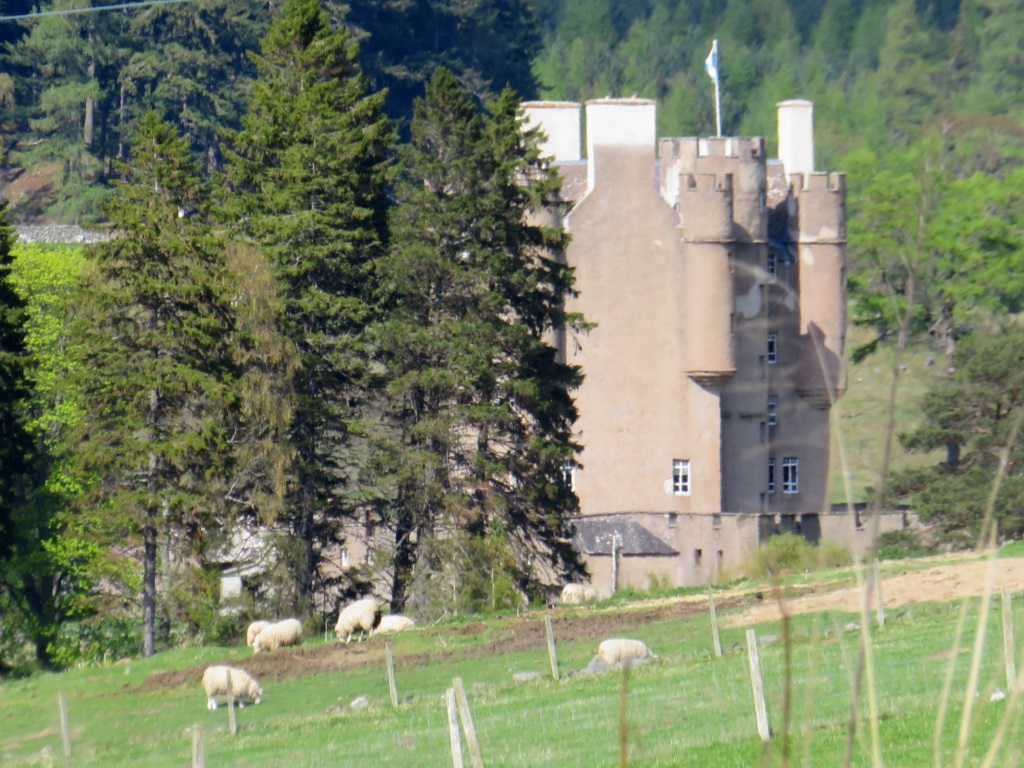 That was to prevent its use by English troops then, after Culloden, it inexplicably landed back in their lap in 1746 where it was slowly restored to the point of putting Queen Vic up for the night.

It's a bit like handing the FA Cup to the team that got hammered on the day, not that this fairweather fan would have minded in 1974.

It's been charitably run since 2007 and they'll let you in for just south of a brown Walter Scott where you can be filled in further on the fate of the Farquharsons.

The stone fountain on the patch of grass next to the Invercauld Arms Hotel is a memorial to Elizabeth Oswald who died, aged just 24, during a difficult delivery in 1870. 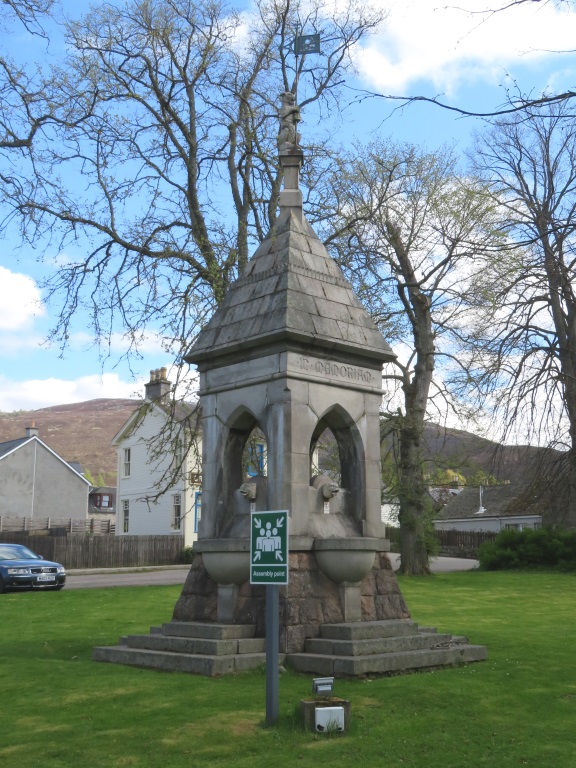 Wife of Lt Col James Ross Farquharson, the Farquharsons were key players in the Jacobite rebellions and the family pad was Braemar Castle, like you didn't know already?

Rather disappointingly it's simply said as 'Far-Car-Son' although 'Far-Kwar-Har-Son' should be the preferred pronunciation. See also Colquhoun.

If you're looking for lodgings, the Invercauld is less than luxurious, it would seem, but there are far fancier offerings at the Fife Arms Hotel, back opposite Bramer Mews. 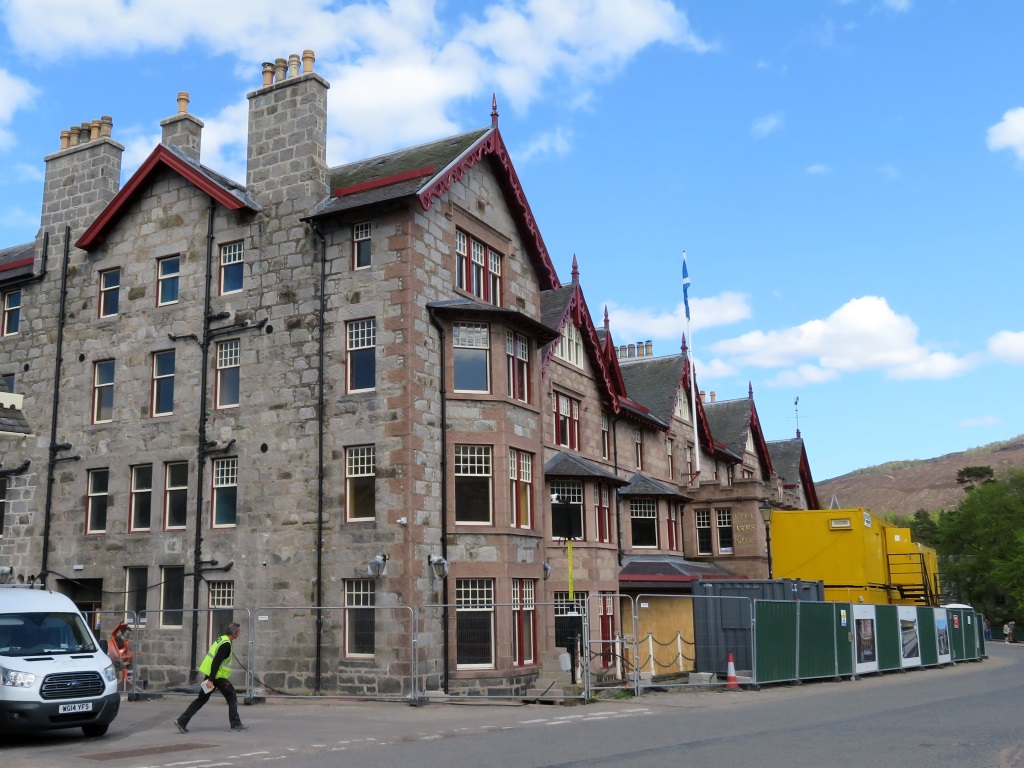 Today's near-two-year restoration is being overseen by an art-loving Swiss couple whose plan isn't nearly so full of holes as their favoured cheese. They'll go on to open on time in winter 2018 as a five-star destination to add to their existing operations in New York and, erm, Somerset.

This was once the village's principal accommodation provider and its last major refurbishment was to convert back to a hotel after it was commandeered by those new-fangled Commandos during World War II.

At the Fife's lavish launch last December, that's something the inevitable, fake, kilted ghillies were definitely advised not to go...

Commando? At that time of year? -27.2°C is proper brass monkeys, remember?