It's a rollercoaster of a ride in on the A381 but you might have to park and ride at the top, when in season, where walking down is also an option. If you're lucky enough to find space in Shadycombe Car Park then leave there in the wrong direction for a decent view of your surroundings and use the obvious route to return by later. 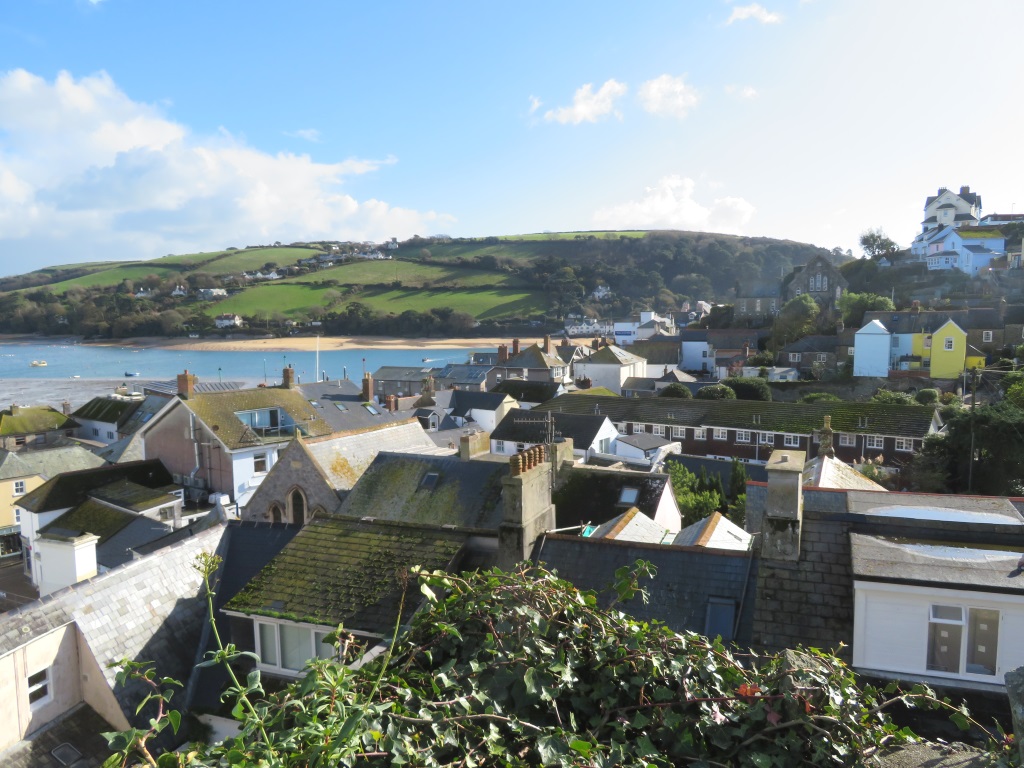 That makes for a leisurely loop and evidence of not just an East-West but a North-South divide, no less.

Finally, the Cornish border has been crossed so it's cream first on the scones although it only really works if it's clotted, of course. That's just one example of the famously fierce, South West, regional rivalry but they've got their very own Devon split here.

The inhabitants of the rugged north think they're all southern softies in the likes of Salcombe what with their ice creams and their shops while northern savages worship the big, silver bird that flies over from Exeter airport. Sedate and serene Salcombe certainly is and standard day-tripper's fayre in and around the narrow streets and lanes. There's a higher than average number of nautically themed outfitters but don't think that means you can get decked out like a deckhand and head off up to Ilfracombe, say.

They still think Napoleon's about to invade and you'll be made to walk the plank, probably.

The bar of the Victoria Inn is advertised as a 'Man Creche' and addresses the often thorny issue of traditional gender roles in society. It's the men who stay at home here while the female of the species goes foraging, in the shops. 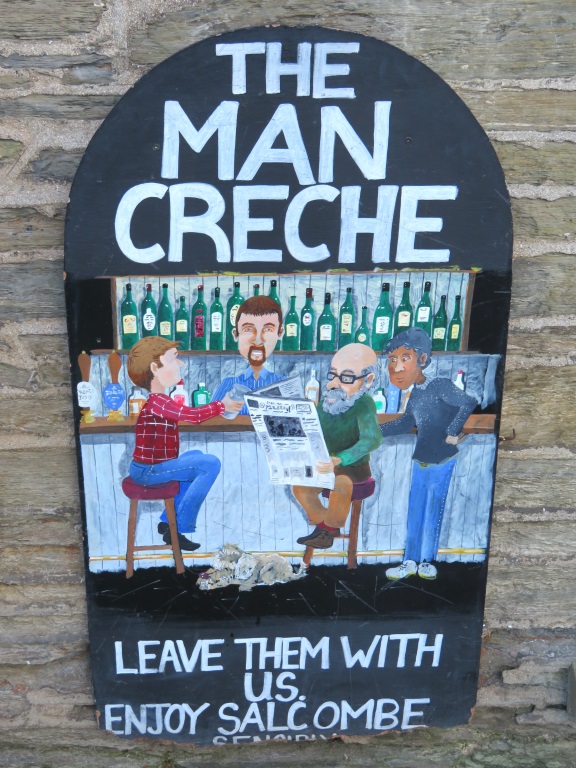 Sure, they sell crisps and beer but they don't do pies, haven't got a dartboard and Sky™ Sports isn't even on!

The small car park opposite is on Normandy Way after 66 ships from the US Navy sailed from Salcombe as part of Operation Neptune or the Normandy landings if you'd rather. Given the lack, generally, of available parking, it's not quite known how and where that lot docked overnight.

With a creek and an estuary, this is a natural haven for sailing even if there isn't an actual marina. Things are just a little too tidal, you see, so the Harbour Authority has to, just like in Vegas, provide pontoons to keep the industry afloat. Salcombe sits at the top of a rugged headland, which is fairly inaccessible as is the one opposite. You'll pass them both as you sail south into the sun towards the sea through what looks like, to these landlubbers anyway, an unnavigable channel.

You call that a channel? When I was a kid growing up in North Devon, we used to sail up the Bristol Channel in an old tin bath, ride the  Severn Bore and still be back in Bideford in time for a pasty supper.

If you're walking England's longest National Trail anticlockwise from Minehead then well done, you're about 450 miles in so just the 180-or-so to go to Dorset. If you're coming from Dorset then it's still about 450 miles to Minehead.

You'll become best friends with both of those headlands on your way in and out after you've caught the foot ferry to or from East Portlemouth.

There's more careful navigation required as the road narrows and the shops run out before things get a bit more interesting, architectural-wise.

Cliff House was built to house someone or other's daughter but she didn't want to live here, however and whoever, even though there was no memorial for a yet-to-happen war to spoil the view up the estuary. 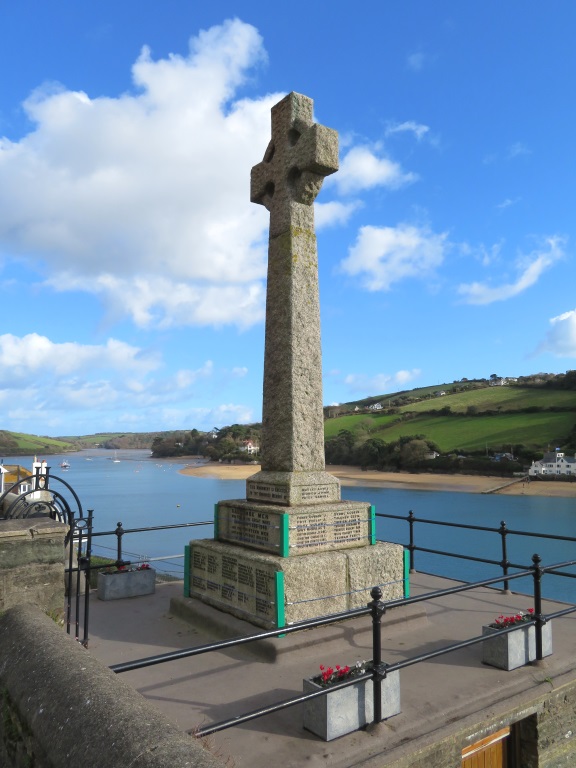 The house was built on the site of one formerly owned by the Prideaux family who had an even bigger pad near Padstow. Mrs P. did want to live here and created the terraced gardens below but it's bet she was no Rowenna Cade, her hands not personally dirtied, probably. Part of the house passed into a Community Trust in the 1920s and operates now as Salcombe Yacht Club, a popular wedding venue and the local library.

From there you can borrow books or as they say up in Barnstaple... 'What are books?'

Things start to thin out as Fore Street climbs to become Cliff Road but here's an inviting-looking building that was formerly a bank. 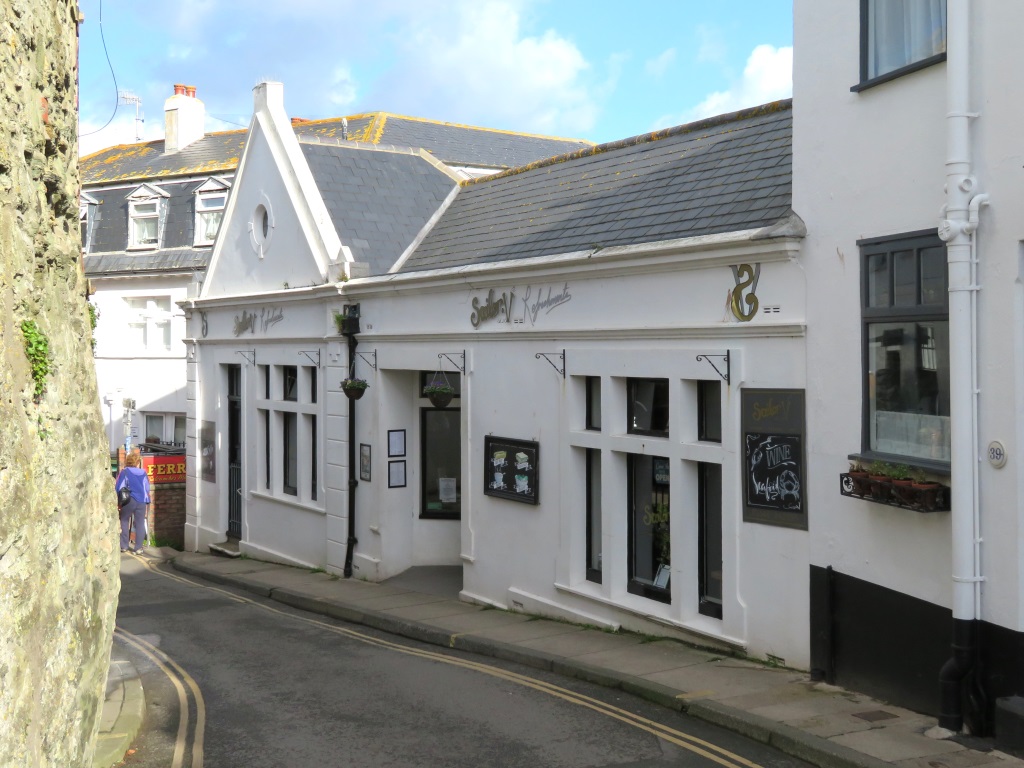 They now serve breakfasts, lunches and desserts with a 'speakeasy vibe' and a mandatory Courier font.

Back down in the centre and behind the shopping, there's access to the water and what's technically a creek with some small-scale fishing still operating out of here, mainly shellfish, they say. This once relatively rare little egret is trying his best even though they're ten a penny, these days.

The waterfront path leads to Island Street, which while not exactly an island is surrounded by water on two sides. 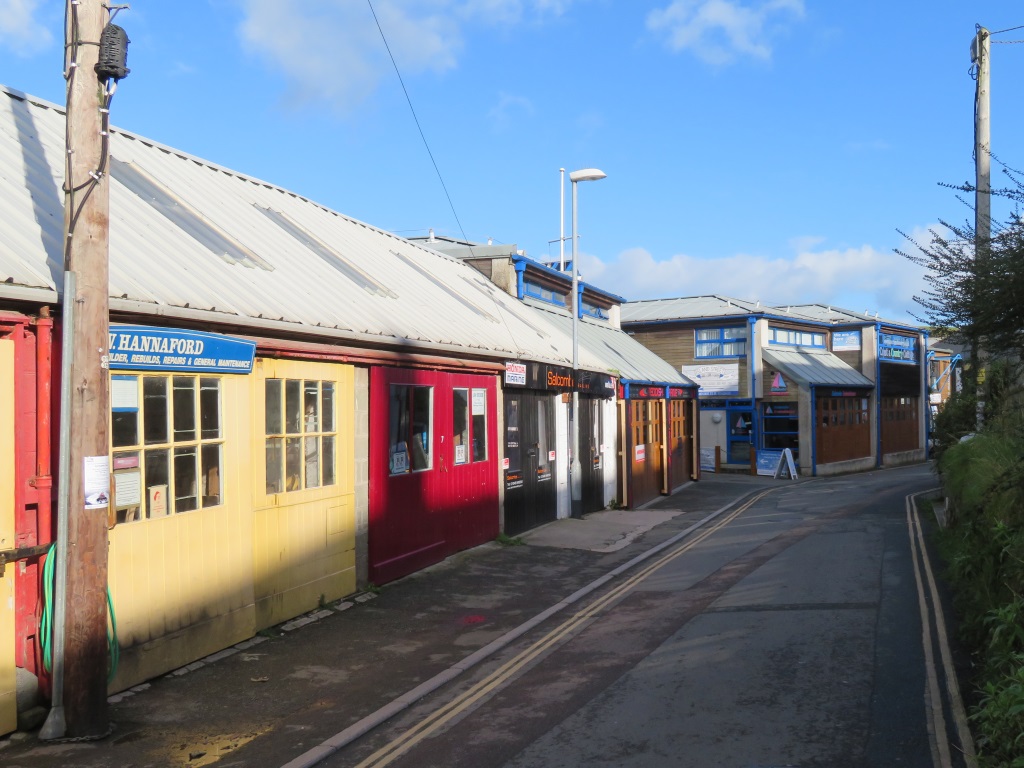 The former workshops are being slowly replaced by artisan gin and child-friendly art spaces, not that it's not already been noticed that Salcombe is a little bit that kind of place.

It's only here, however, that there's any evidence of the old boat building industry that still supports the fishing.

Fishing? You call that fishing? As a kid growing up in North Devon, did I tell you about the time I  caught a shark off Hartland Point?

Some of them don't even do their own distilling, you know, and charge you £40 a bottle for what was previously just a bathtub full of industrial ethanol and juniper berries. Here they do do their own and this relative newcomer to Salcombe has had global awards tumbled down on them.

Here's an unusual and eye-catching attraction and another chance to address the often thorny issue of traditional gender roles in society. 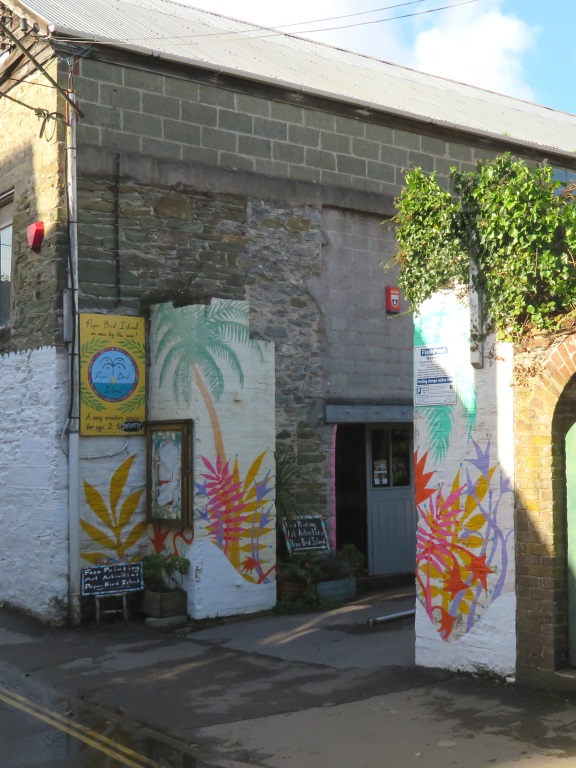 Dad can do the gin while mum and the kids get plastered in a very different kind of way, all over, with paint.