Six miles north-west of Hastings, here's the site of the actual shenanigans, the shenanigans being those that named that toon.

The town grew up around the abbey, the abbey that Willie Conker was made to build as a penance to the Pope for his part in the punch-up that led to 6,000 deaths, they reckon. If only there were that many parking spaces. There's now known to be plenty of parking elsewhere but accidentally pulling into the English Heritage™ car park, you now require a token to exit and that needs to be bought at the abbey but without paying full price for entrance to the abbey and the, erm, 'alleged' battlefield and no, joining up again isn't an option thanks very much anyway.

Is it really more than a year since Belsay was found to be so beguiling?

The logistics of the parking now eclipse those of defending a low ridge prior to a spontaneous pursuit, possibly caused by a sequence of feigned flights by the French, resulting in a counter-attack by their cavalry and an ultimately futile, rearguard action.

That's thought to be how it went and they're still rubbing it in just off the high street. 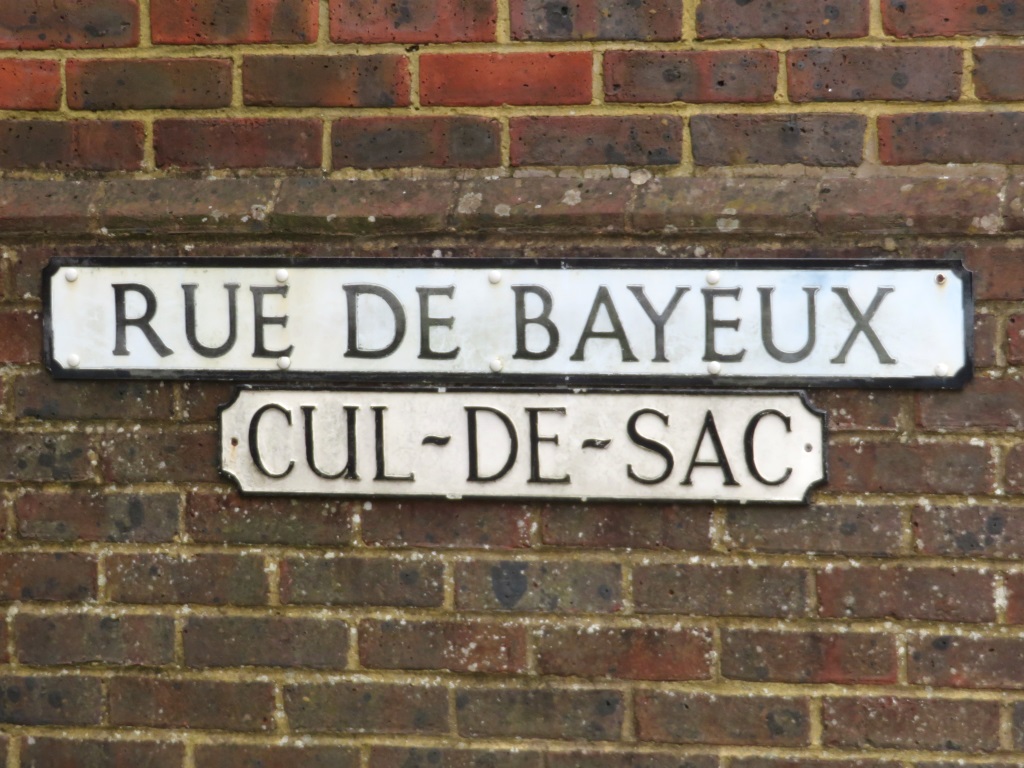 Things are rather picture postcard and Postman Pat™ agrees as you head off up the high street. There's a high concentration of people trying to sell you things you don't really need in an attempt to tempt the tourists up from the abbey. 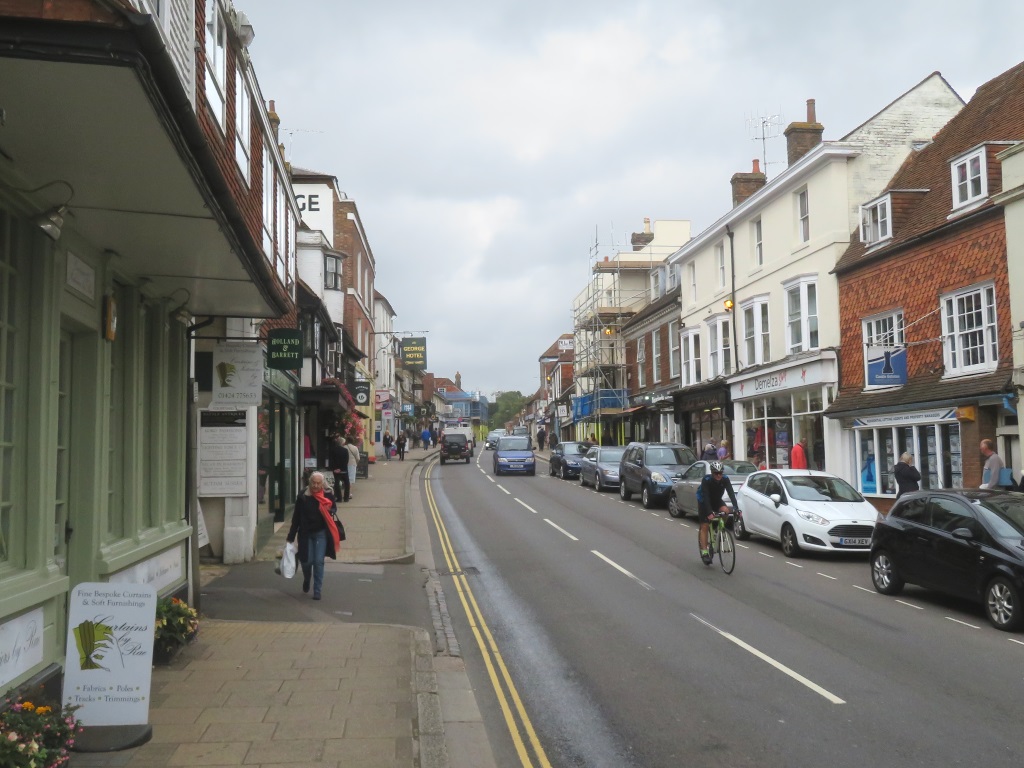 Not quite so old to be listing, many of the high street's buildings are listed and Grade II, early 19th century if you're that interested.

Posh popsters Keane hail from hereabouts and just about namecheck the town on their single  Sovereign Light Café. That's a real place down on the coast in Bexhill and is where they spent much of their adolescence skulking about, probably. By the look of baby-faced frontman Tom Chaplin, that could have been just last week.

A little further up the high street, things are more 15th century in the form of the Almonry, an old distribution centre for those without much in the way of life savings. 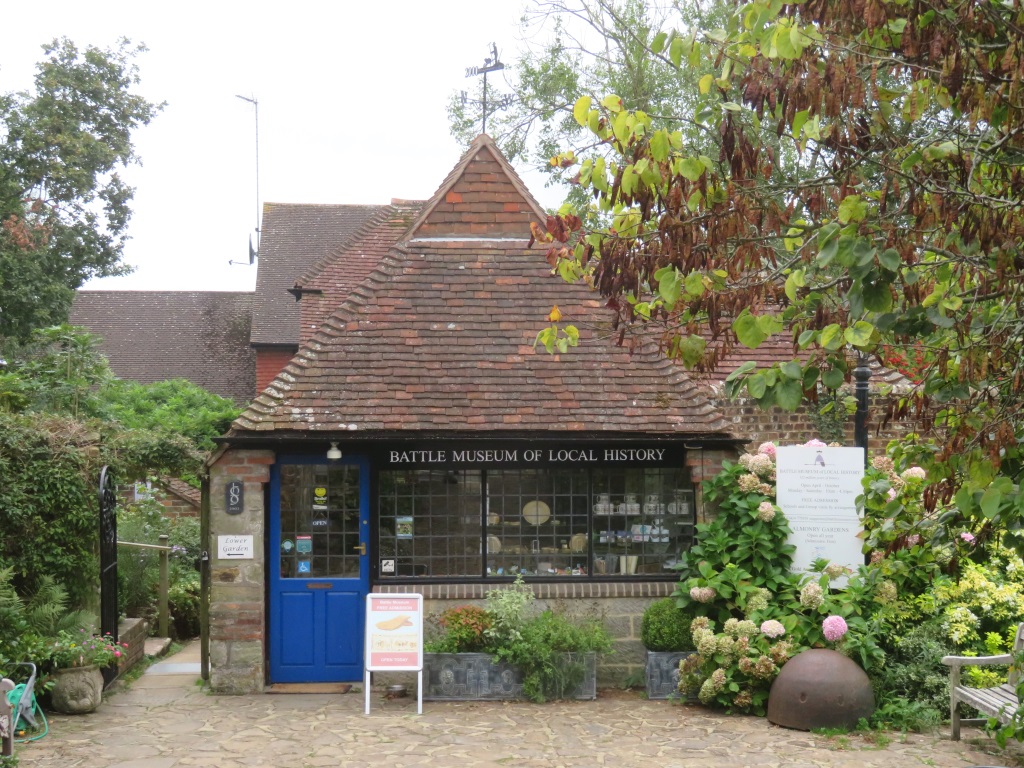 If you too are too much of a skinflint to fork out for the site of the single most important event in English history, probably, there's far better value, right next door, at the free Battle Museum of Local History.

The small exhibition has enough on 1066 for the average individual but far more interesting is the changing face of Battle's Post Office over the years, seriously. The helpful lady is delighted to hear that Hastings has two new fans and as for the donation, well, for once you're welcome. 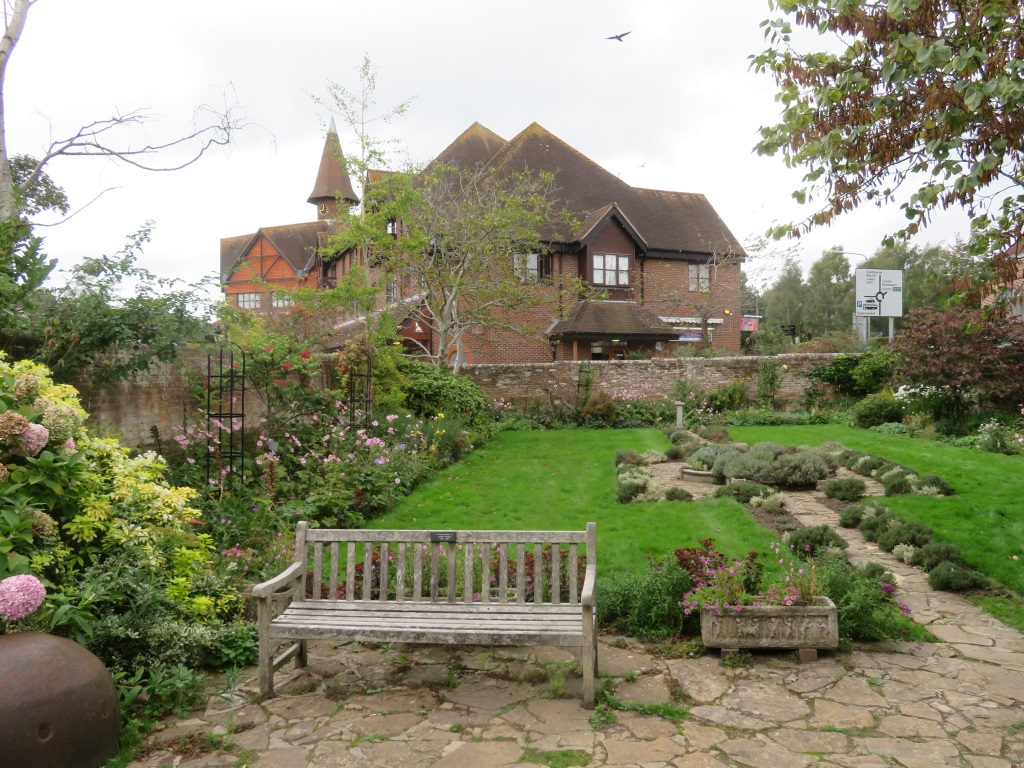 That'll help to keep their really, rather-marvellous garden tended to and there's more wildlife in here than there is down in Dungeness.

The Sussex High Weald is an Area of Outstanding Natural Beauty and, as should be known by now, they don't hand them awards out willy-nilly.

When Battle is seemingly conquered, there's a chance to head into the highest concentration of ancient woodland in England. Not just for that reason, though, the old Squire of Brightling went and built a load of follies in it, obviously.

John 'Mad Jack' Fuller was a charming eccentric, they say, which really means an inveterate drunk, gambler and womaniser. His day job as a politician included promoting the benefits of slavery but he still found time to build a pyramid as his mausoleum and it's a short walk to his Hermit's Tower, the result of a drunken bet. The Brightling Needle, the Observatory, the Rotunda Temple, the Coade-clad Summerhouse, and the Sugar Loaf can be found scattered around the surrounding countryside and not, as first thought, through an old door in the churchyard.

Through there is a dog as mad as old Jack and you'll beat a retreat from his back garden wishing you'd done even the most basic of homework beforehand.

Meanwhile, back in Battle, there's more of the same as you head back down the opposite side of the high street and a chance to check out the fleshpots should you be here for the night. 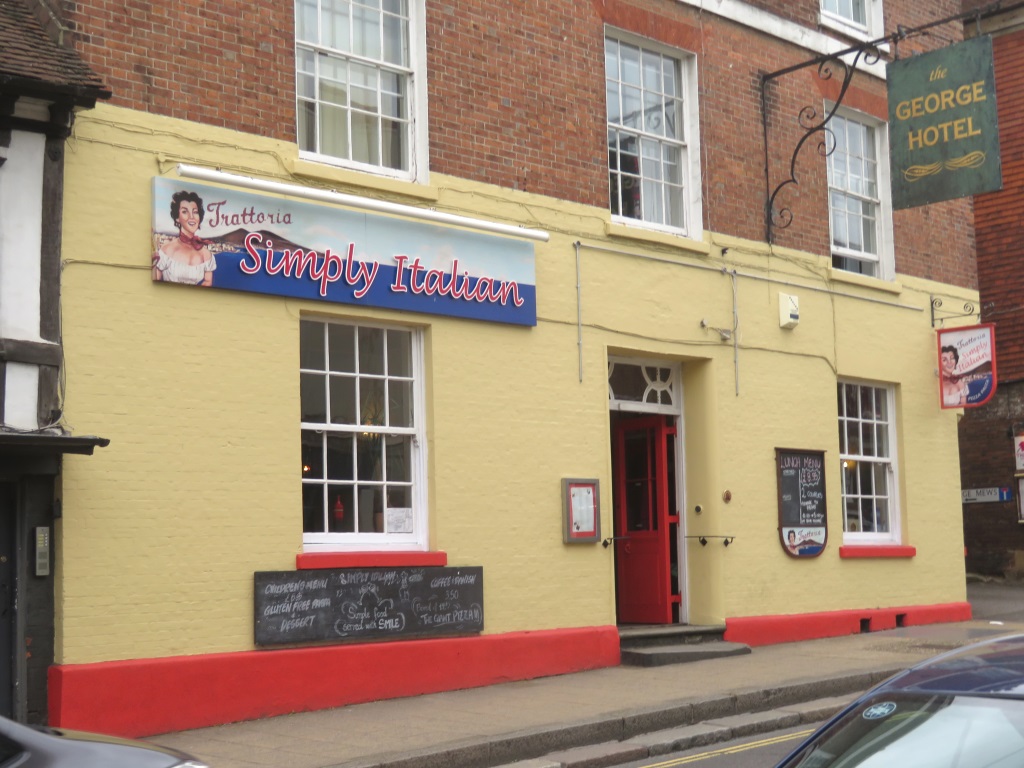 An absence of the larger chains indicates a reluctance to be invaded, again, although Costa™s managed it in 2012 when they moved into the former 1066 pub. Serene it may be, these days, but there's evidence of a more recent, international conflict.

A Neapolitan street food restaurant is soon to open and will replace what was the Bonani Tandoori. 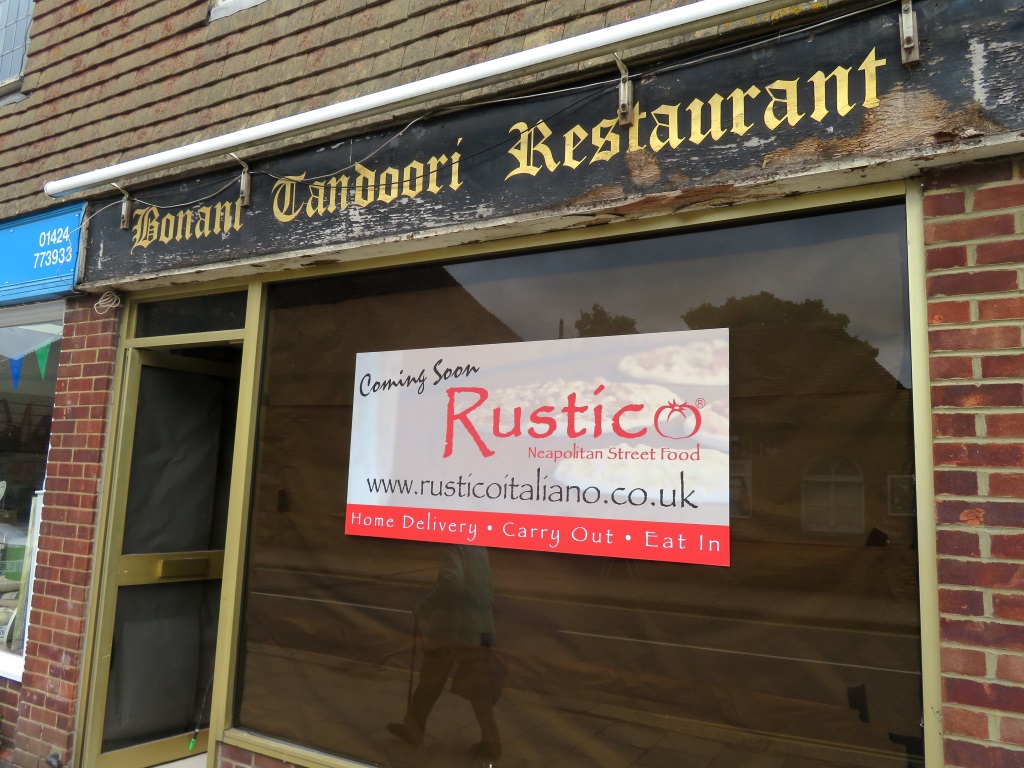 Take your pick from the pubs and cafés along the high street but these cherry scones were the best tasted this week. Admittedly, not every one in East Sussex was sampled nor can their weekend-evening tapas be vouched for, neither.

There's more action to be had past the impenetrable abbey as the road heads down in the direction of the train station.

Things become largely more residential including the former home of the owner of the Battle Abbey estate. Tenants would doff their caps to the Duke of Cleveland, whoever he was, as they handed over their rent through the door downstairs. 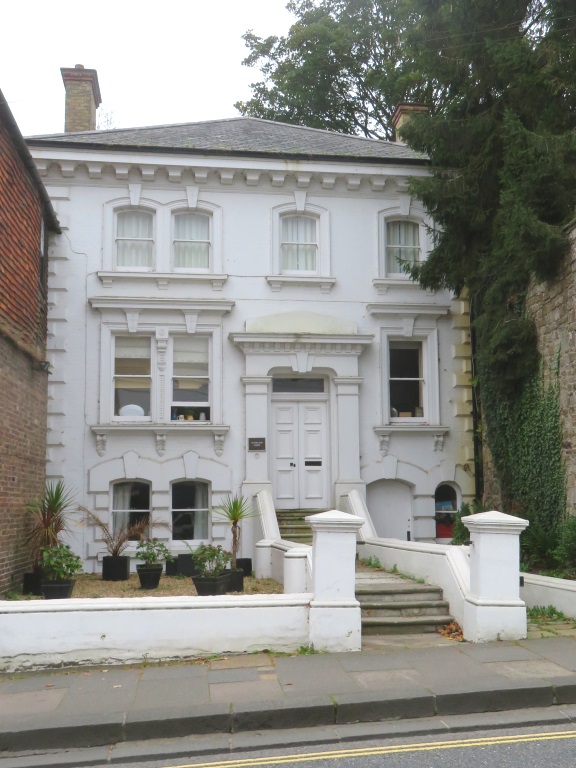 He had links to Barnard Castle, built when his northern forefathers were being harried by Willie Conker's cohorts, probably, and is a very early example of what goes around comes around, right kids?

The immediate area has been branded as 1066 Country and there's a chance to stride out into it. The 1066 Country Walk is a relatively short, long-distance walk and at just 31 miles belongs in your 'recreational' category, really. It starts in Pevensey Bay, the landing site of the invading Normans, and passes through Battle on what might be, but probably isn't, the original route. It then carries on to Rye and, just like SlyBob, they had a short holiday there themselves.

A cement mixer has just passed by but he's too fast for these fingers to get a photograph. His name? Of course it's William the Concreter! There's no immediate need for any light construction work in the East Sussex area but if there ever is, this bunch have got the business based on their bare-faced cheek.

That and the absence of a rival operator called Harald Hardradahat ha-ha!

No, the only thing trying to be built is the number of people who are, at best, even moderately amused by this nonsense.