It's time to head deep into the dark heart of the Trossachs[1] and the Queen Elizabeth Forest Park so some sustenance is required.

Picking up bananas in Aberfoyle, it was pointed out that his use of the apostrophe was technically incorrect, the best bananases what? It's also confusing post-transaction since none of the best bananas' baggage is wanted but yes, SlyBob will have a bag, thanks.

That was met with a scowl that soured his plums. He's already had to rewrite all of his signs to show the price in kilos, you see.

[1] Not really, the Duke's Pass cuts right through it.

The opposite's happening with place names where the apostrophe is being dropped and while Bishop's Stortford's train station complies, the Welcome To by road sign doesn't. 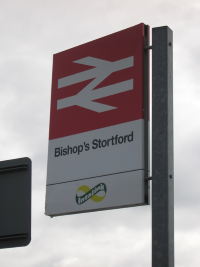 The Apostrophe Protection Society[1] can get very possessive about this but they've no worries in Brig o' Turk since there's simply nowhere for the apostrophe to go.

Unlike SlyBob and the iconic[1], wooden tearoom in the village is the starting point. From the Gaelic tuirc for 'wild boar', of course, although there's no sign of it on the menu alongside the goulash. 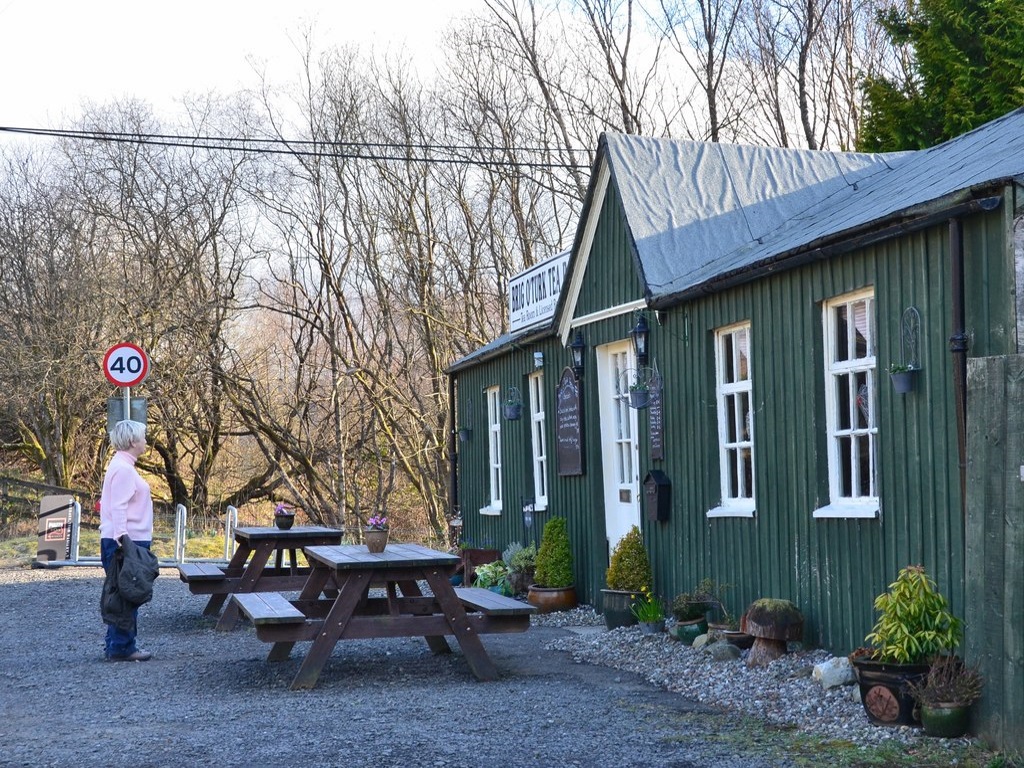 Husband and wife team Csaba and Veronica Brünner have Hungarian roots, you see, and while there wasn't room for a big bowl of red stew at 2 PM, the hortobagyi pancakes packed a similar paprika punch.

Some recent, erm, research suggests they've since moved on but new owners James and Kay Hill will now fill you up with home-baked treats and veggie snacks.

Speaking of having roots, it's time to get the daisies on for this fairly straightforward four-miler. Largely on broad forest tracks, which should be clear after last month's storm, this is now not so much of a meander but more of a mission! 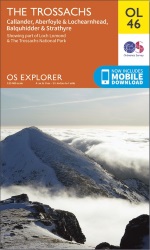 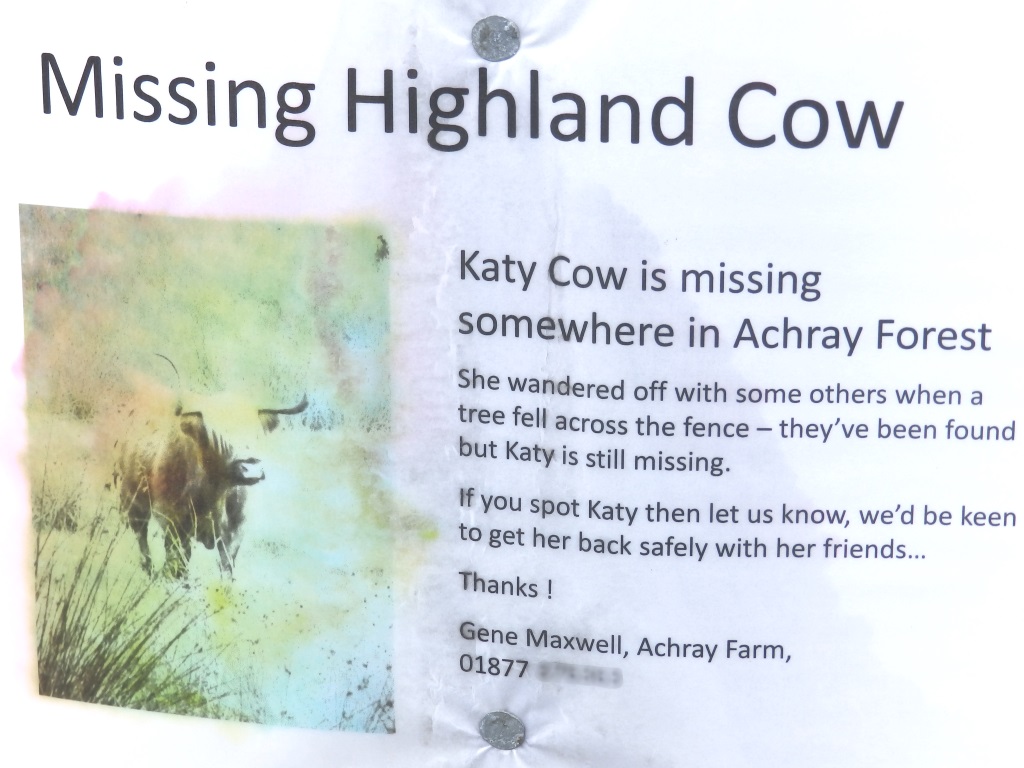 A mission to find Katy Cow who's only gone and gone missing in there. It's hoped she's all right and not missing her herd[1] too much but where could she possibly be?

From the tearoom, turn right onto the main road and follow the pavement for just under 400 yards. Left now to the Byre Inn, which may or may not have reopened[1] that 'refurbishment' is taking much longer than expected.

It's not known, neither, if they'll be keeping the petanque pitch but what with the goulash, it's like a Grand Tour of Europe never mind a trail in the Trossachs. 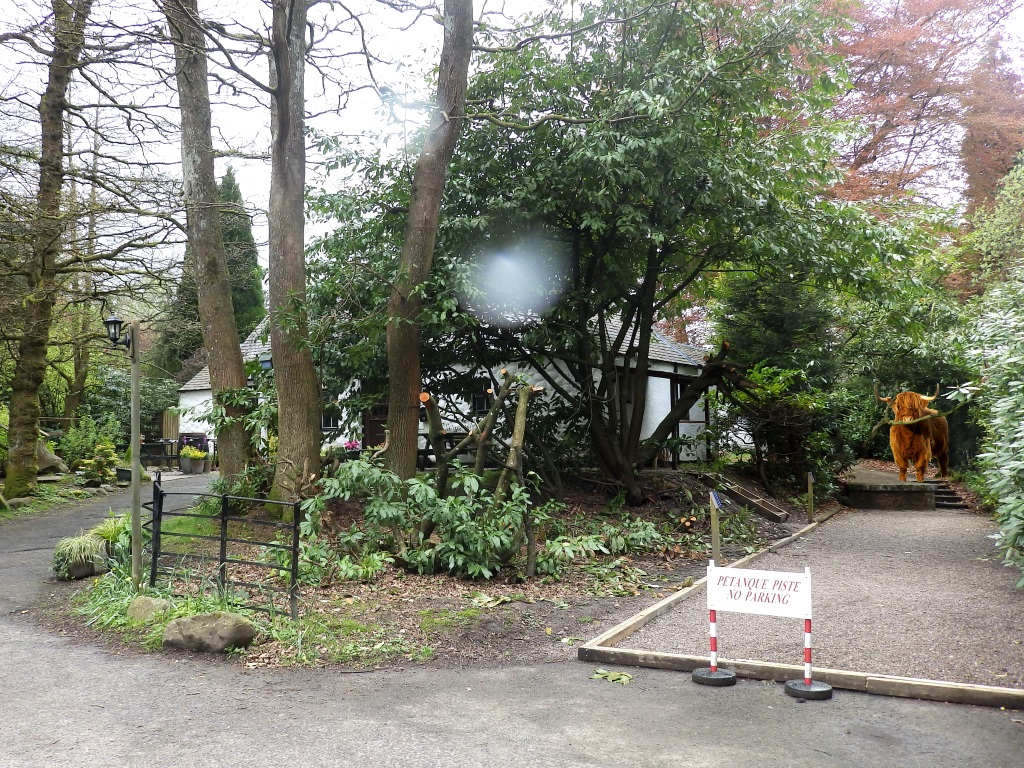 After the bridge, the road veers right to a farm where Katy Cow normally lives together with at least one porker. 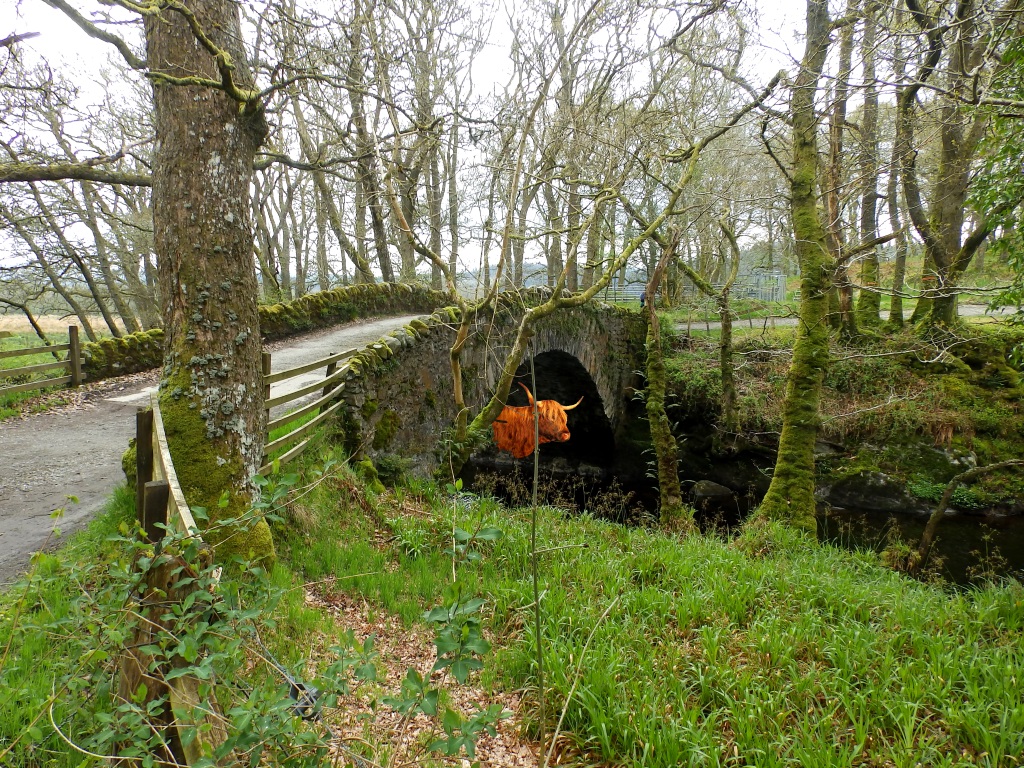 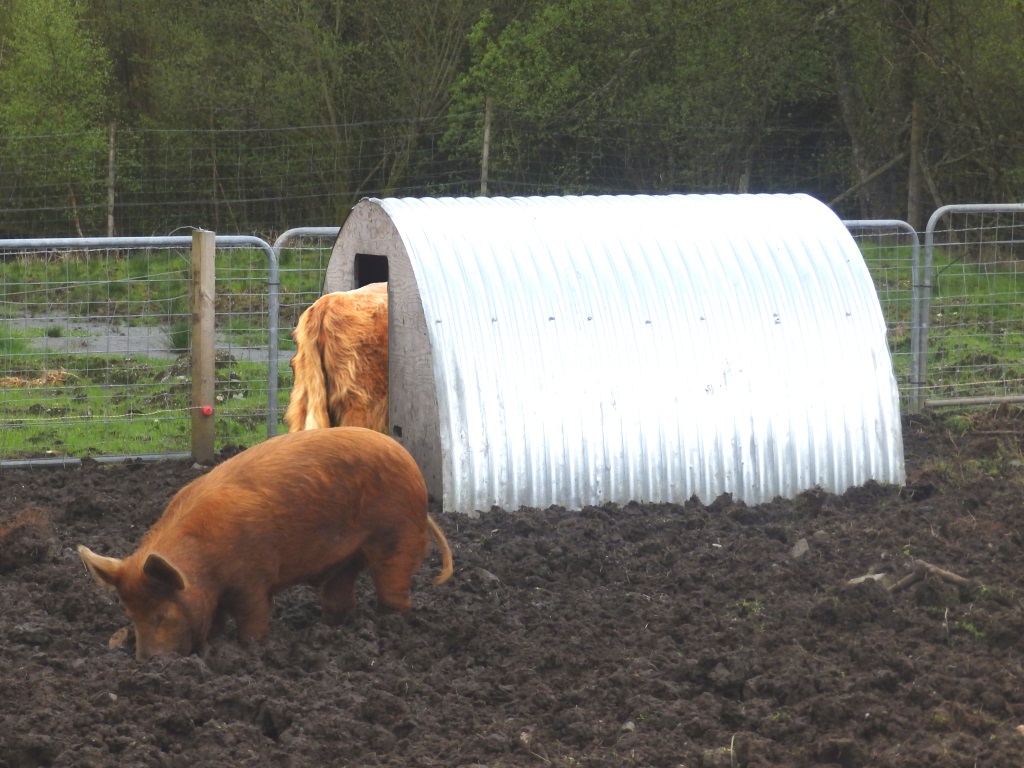 No sign of her yet, though, it's assumed they've checked all of the immediate surroundings?

Just past the farm, the road meets another, which is more suitable for your general purpose motor vehicle. This is the Three Lochs Forest Drive and three current pounds to Forestry and Land Scotland will see you in one-way or another.

Watch your Green Cross Code™s and go left where there's a view to the east over fields and, is that? No, it can't be? Katy Cow? 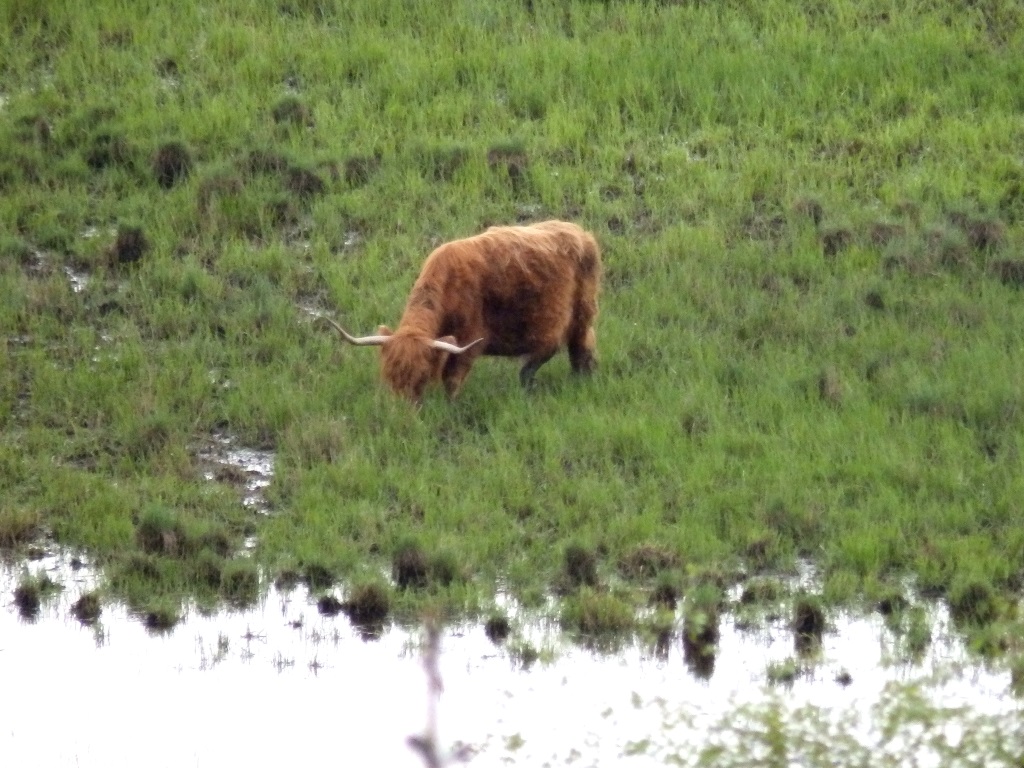 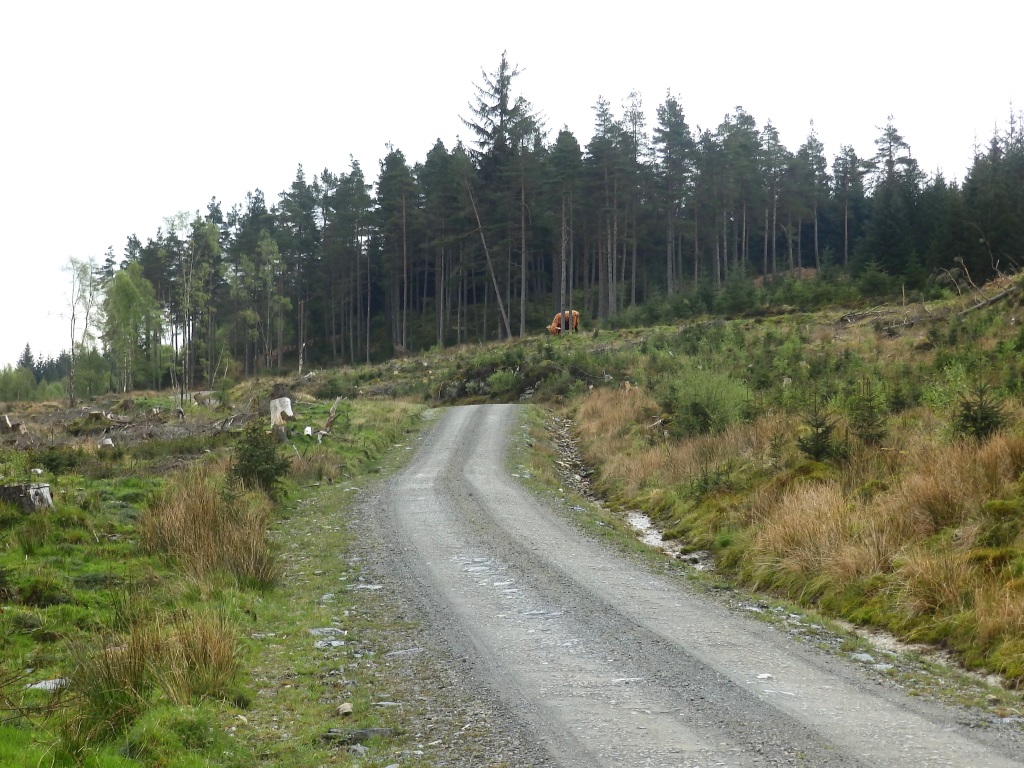 'Here Katy, Katy, Katy Cow! Here girl!' Not a twitch. That can't be her, anyway, they'd have taken that waterlogged sign down, surely? Let's hope not, nobody wants to be out on a wild-Bos taurus chase so just keep to the road as it gently slopes uphill.

At the end of the slope up, turn left and after 10 minutes there's another junction to negotiate. Go left towards Loch Drunkie, the best named[1] of all the lochs where, unless you're doing some furtive fishing, there's no need for that permit. 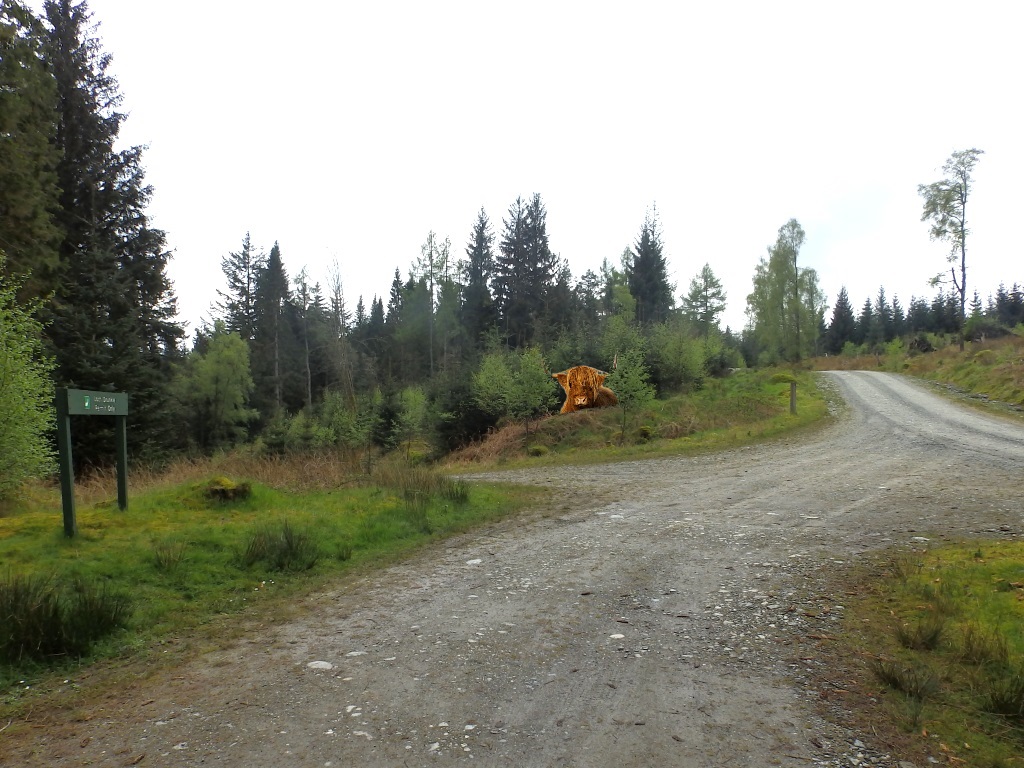 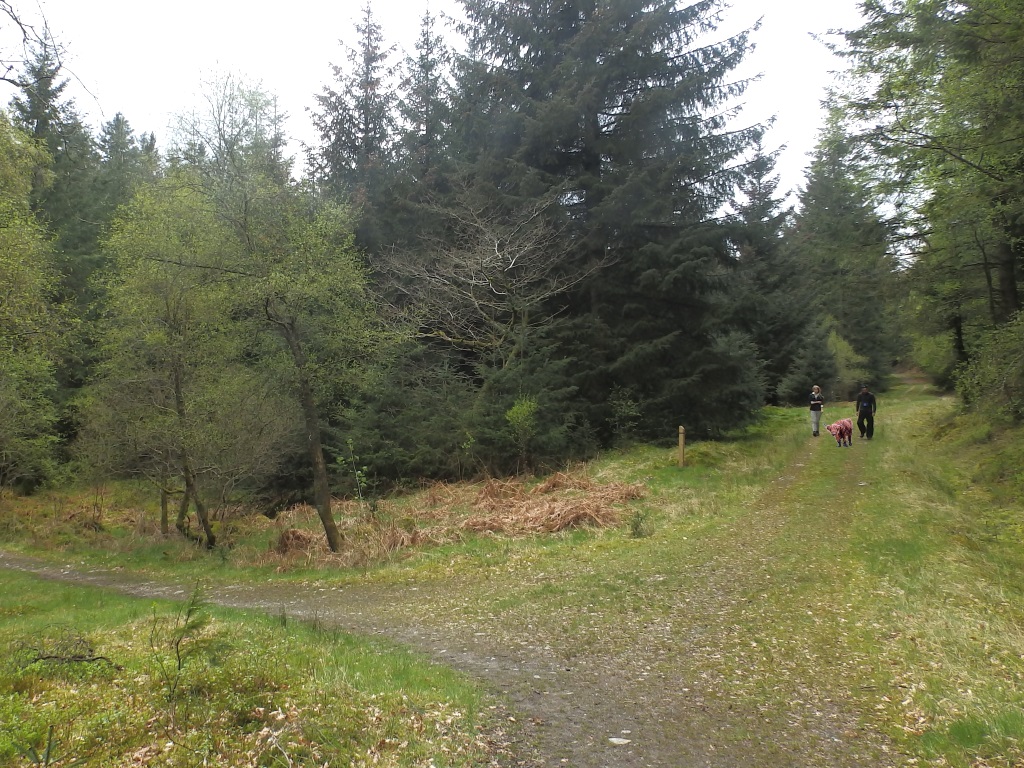 Keeping left, the path leads down to the loch although there's a fair bit of shrubbery that accounts for it, inexplicably, not being shown, probably.

[1] Loch Lochy up past Fort William is possibly the worst? That's not even trying.

There's some fun and games to be had along the path that skirts the loch. An upturned boat[1] might provide some shelter from the rain then the chance to hit a home run although the bat's not thought to part of the original installation. 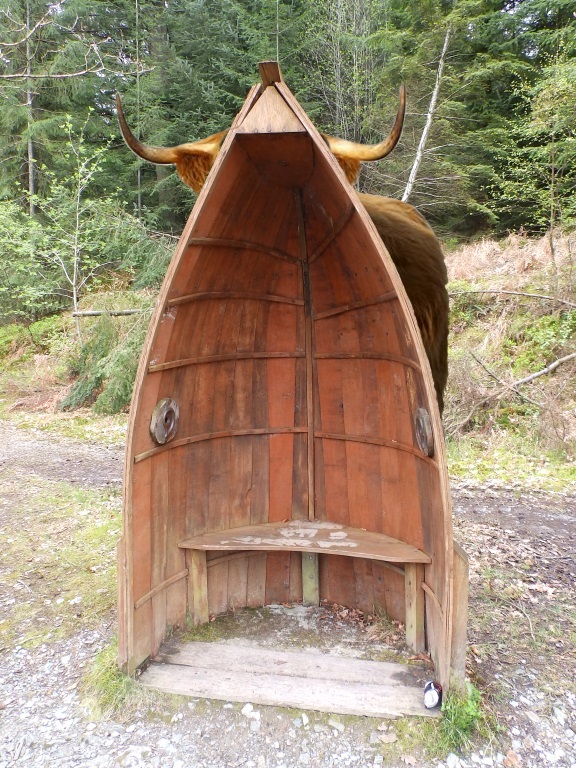 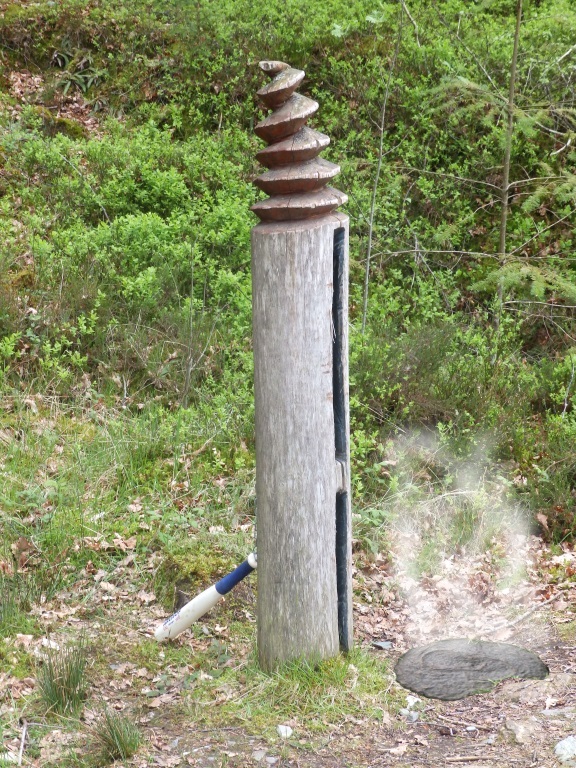 Finally, there's an opportunity to swing on some ropes, which will save you at least £33 at the Go Ape™ back in Aberfoyle. 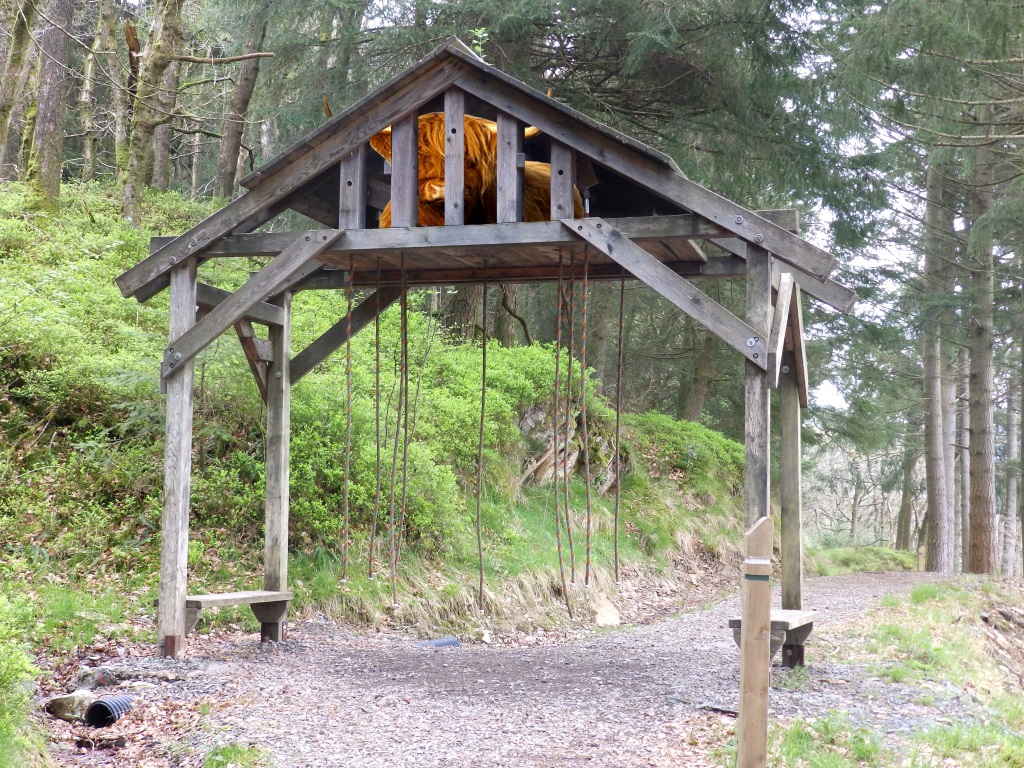 [1] That crumpled Pepsi™ MAX can definitely isn't ours. Idiots.

Soon there's an area for parking where a block of lavs have been laid on for your convenience. 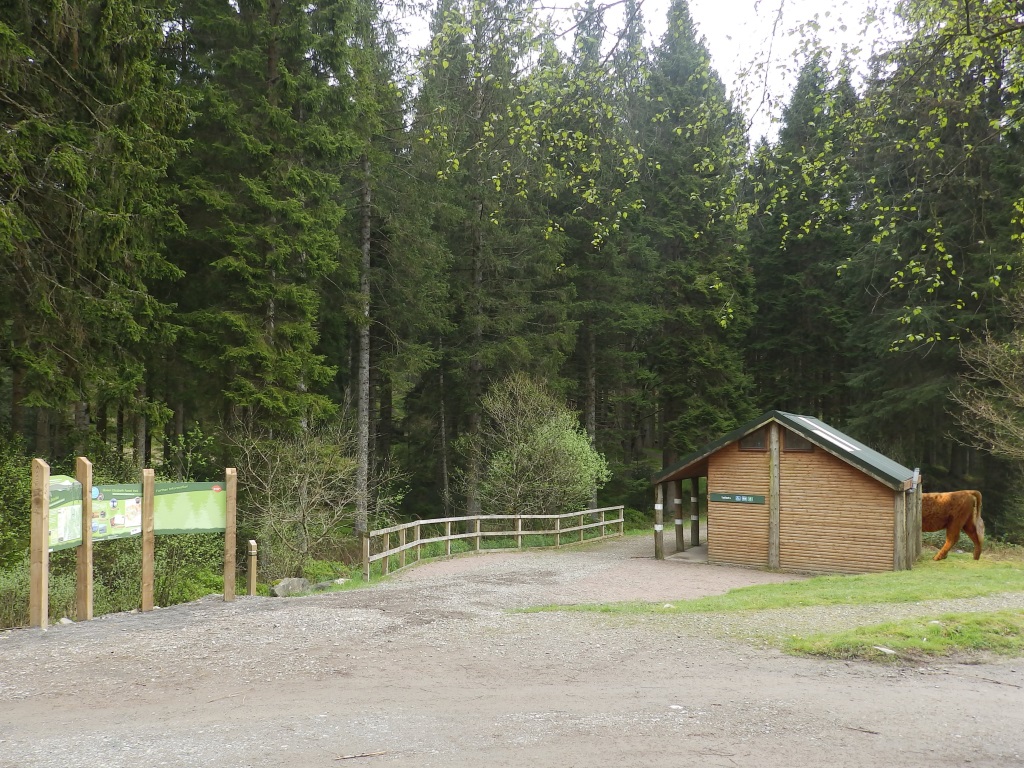 Cars can congregate here so you might have to watch your Green Cross Code™s, again. In the past they would have been described as 'lazy bums' but that's likely to be SlyBob in 10 years time so, nothing wrong with a friendly wave, eh?

Head north away from the facilities and take the first left. 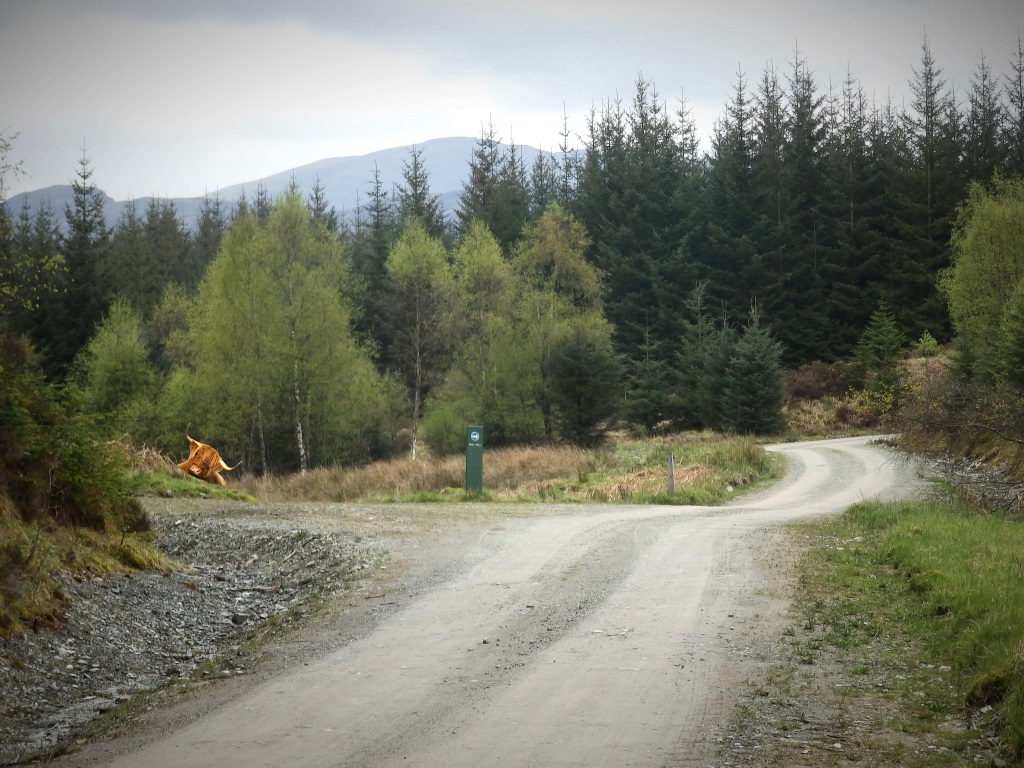 This leads off the main road and into the forest properly away from the cars and while it's hardly Brands Hatch, they can be just a tiny little bit annoying.

Although this is the Forest Commission Scotland, there's currently no logging going on down here but there is some evidence of last month's storm. 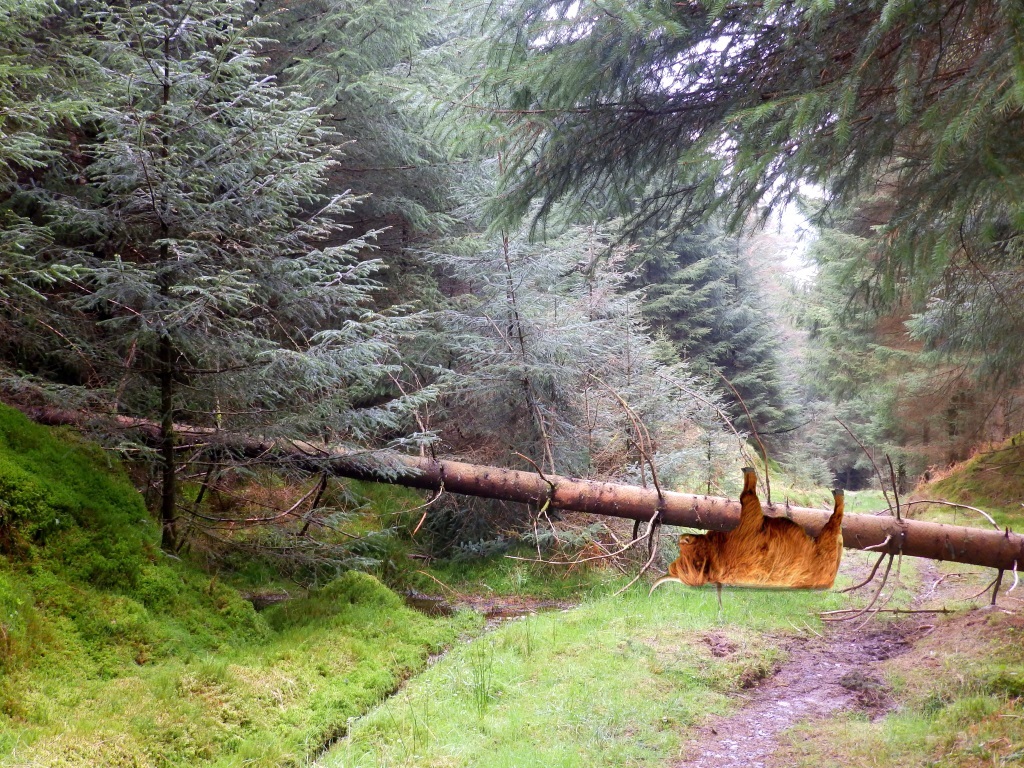 It's less than a mile to meet the road walked in on earlier then slightly more than the same again to retrace the steps back to the farm. 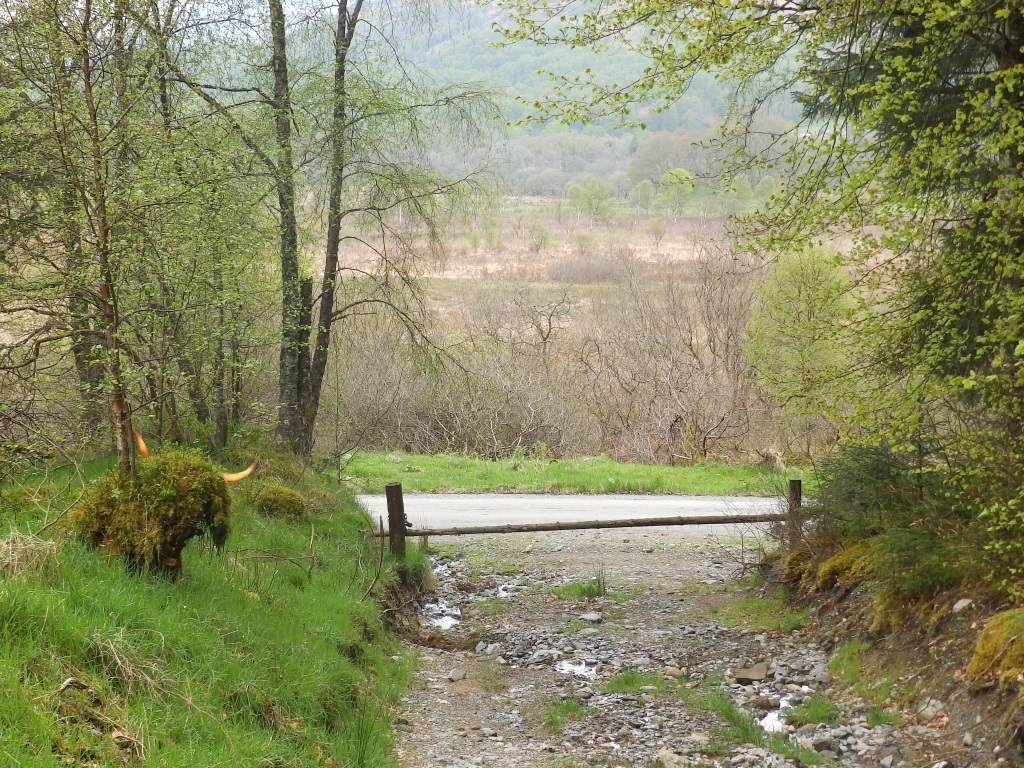 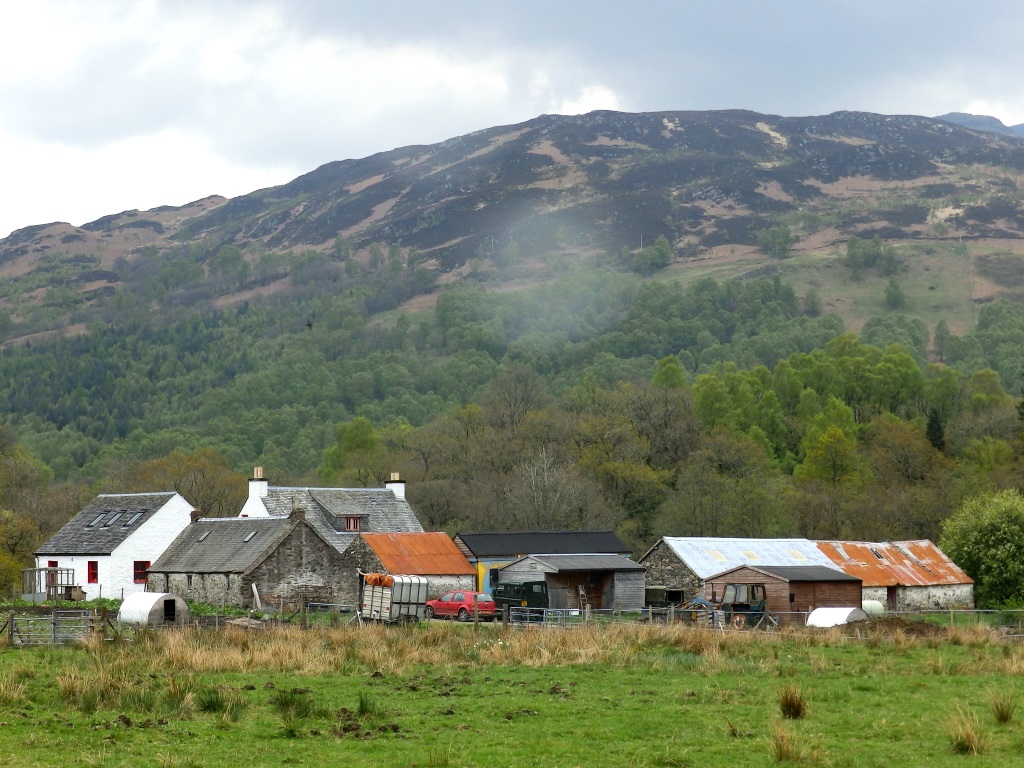 This expedition has been fairly flat so the bigger hills north of Brig o'Turk are being pondered when there's a distraction back at the Byre Inn.

It's seen they're doing two-for-one on their beef burgers and not one to pass up a bargain but mindful of the industrial scale processing often involved in these products...

'Is the meat sourced locally?' Bob enquires...
Ye cuid say that, he says glancing outside at the forest.

That's a joke, of course, including the translations that were provided  here. SlyBob P.I. has been on the case for over three years now but with new owners at Achray Farm, the case of Katy Cow remains unsolved.

You'll have to arrive at your own ending, which is as initially disappointing as how they  wound up The Sopranos, right kids?