It's a valley full of rooks, alright, and some, but more on that in a minute. Not the first time for SlyBob in and around the picturesque Wear Valley but a first for a bird in the place name and another one can't be thought of[1]? Österreich? Nearly, but there's somewhere not been to and Gullane isn't that kind of Laridae.

Here isn't quite on the Wear but nearly three miles north up a B road, which leads into the remote North Pennines, and several hundred folk have chosen to call Rookhope home.

'The most wonderfully desolate of all the dales' said Wystan Hugh Auden with a typically nice line in the downbeat. He holidayed here as a lad, you know, just after World War I and would later write... 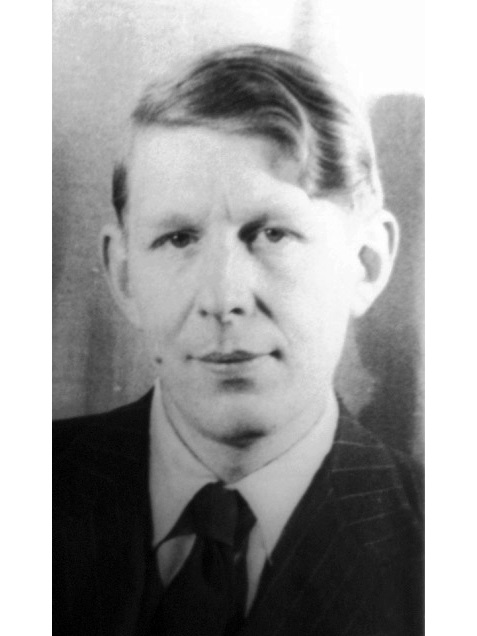 In ROOKHOPE I was first aware
Of self and not-self, Death and Dread...

This after dropping a pebble down a deep and open mineshaft, they say. Still, if there are no apples to scrump around here, what else is an adolescent going to do and then dwell on? The one from  Four Weddings should have been quoted but it's still strictly copyrighted, you know the one...

Halt every time-indicating device,
Remove the receiver from the apparatus into which you normally speak,
To the family pet, a nutritious piece of osseous matter to keep quiet give...

[1] Swanage, actually, but that won't be until in the future.

The route heads north-east up a slope then counter-clockwises it back via the moorland that gives this area its distinct identity before you drop back down. With your newly bought OS X307 strapped to your chest, there's industrial heritage to be had in the heather, they say. 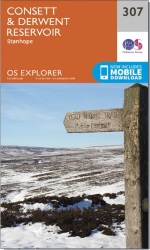 That and a load of rooks, probably.

Ignore any opportunities to park up in the village and head west for just under a mile to reach a layby. Opposite is an arch but not just any old arch, this one used to have a chimney on it, a horizontal chimney! 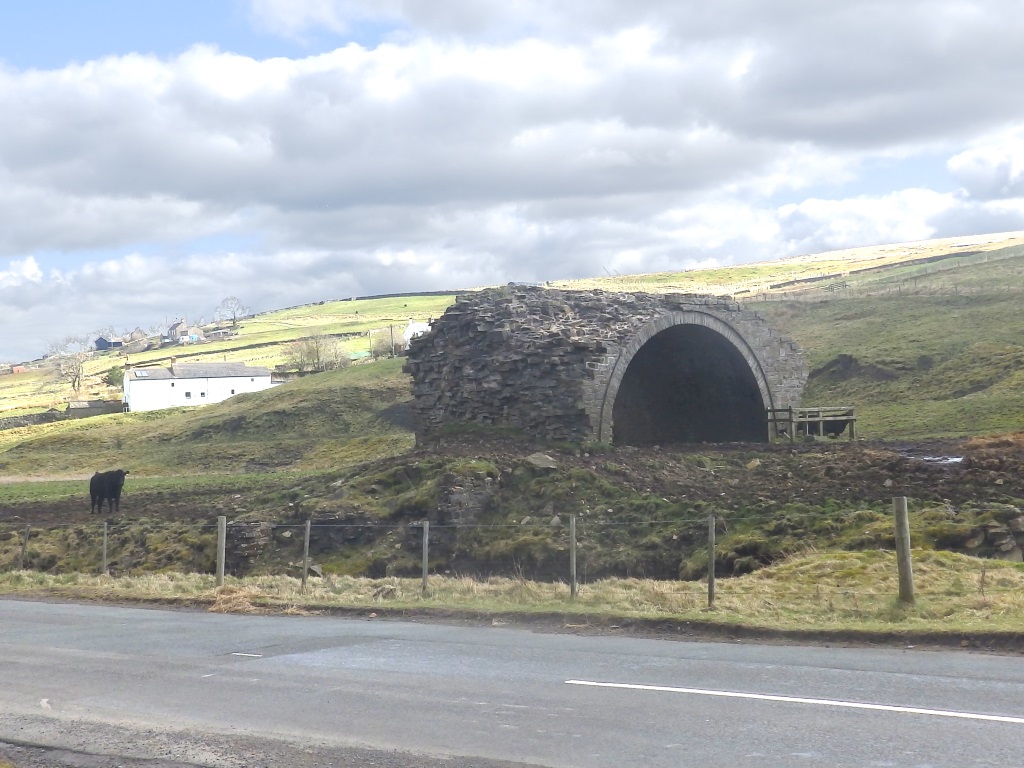 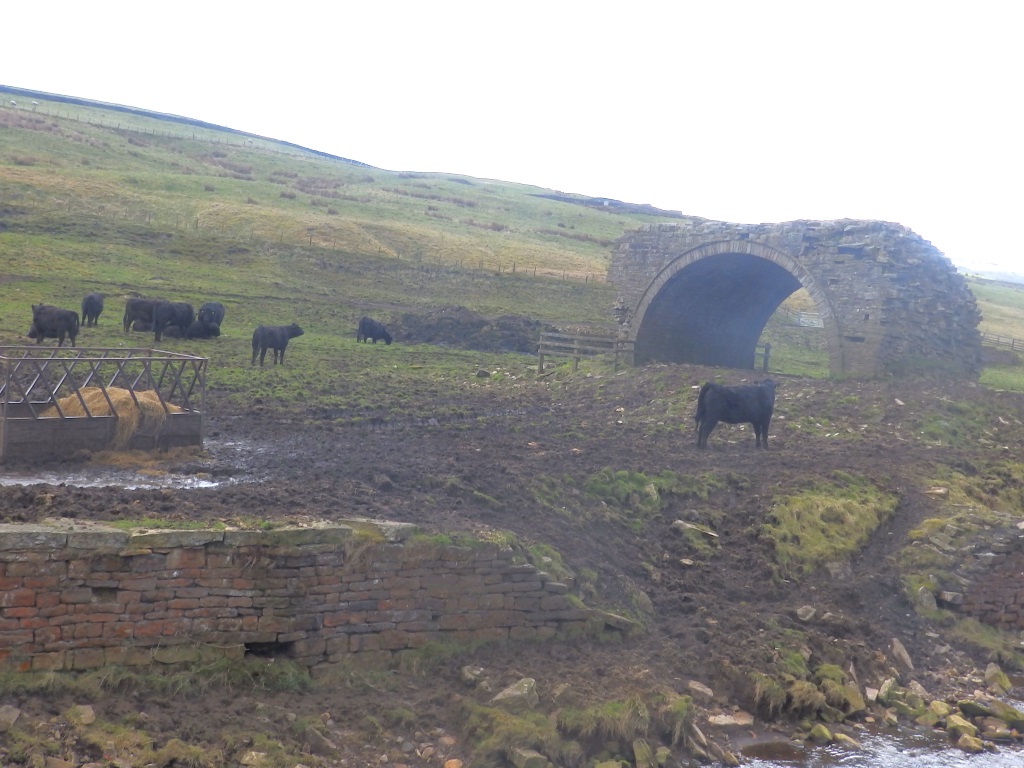 They used to smelt lead beyond the cows, you see, and if you've ever tried doing that at home, you'll know what a noxious, old business that can be.

A semi-circular tunnel was built atop what were once several arches that ran here from the smelter, over the road, up the hill then more than a mile to the high, open moor. There, 700 foot up, a 'proper' chimney belched out the fumes to keep the village from becoming too stinky or poisoning the residents if you'd rather.

You can follow the route although the humps are unknown but they might have been access points to the tunnel, which they will insist on calling a chimney. 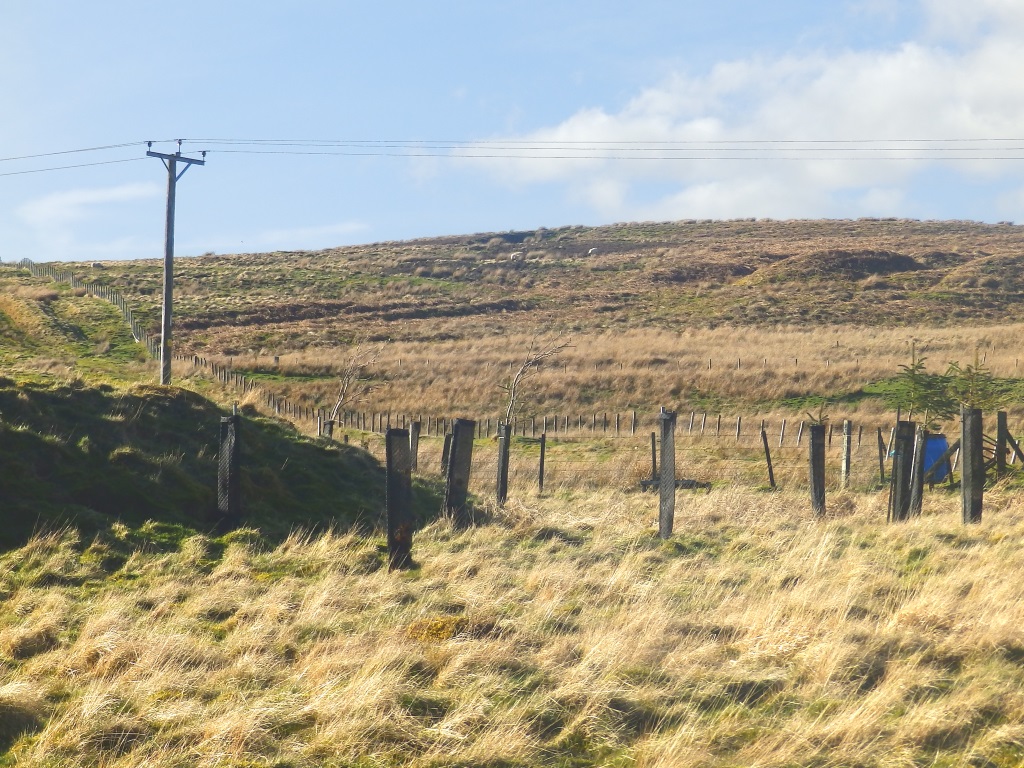 Men were employed to scrub the insides, you see, where any excess, condensed lead and silver was then flushed back down to the bottom. Some ingenious engineering there for the early 1800s[1] but industrial overkill?

Not so, this was a highly profitable business and the capital outlay for doing things this way could be recouped in a couple of years, they say.

Taking care on the narrow road, head east towards Rookhope until you pass the war memorial on the left and the Rookhope Inn, RIP, is right ahead. 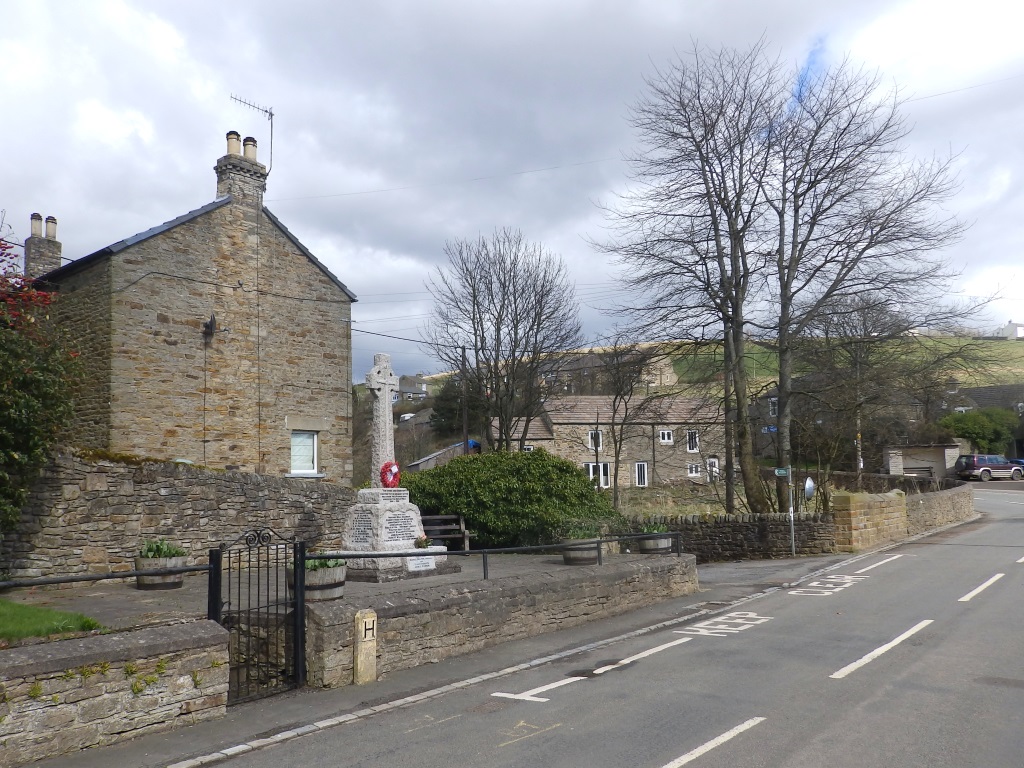 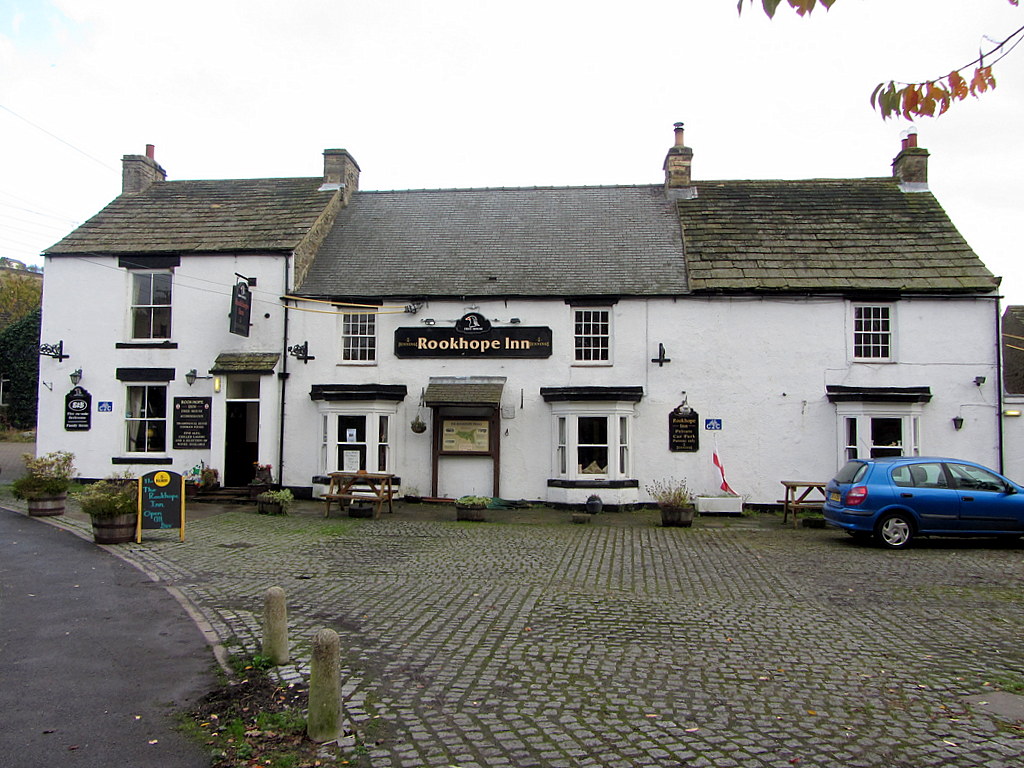 Outside the pub, an information board and a rough looking lad nursing a Fosters™ and a fag...

You lost mate?
'Not yet!' Bob retorts in a flash.

At least that's what's wished was said but not until later[1] and more on that in a minute. What was really said was 'Just checking thanks.'

[1] Classic L'esprit de l'escalier there although this would take an hour. That might be too long to qualify when it simply becomes hindsight.

Turn left at the Post Office and take the broad track uphill past the bins. This is signposted as part of the Coast to Coast Cycle Route although the terrain means you're unlikely to see anyone on a 'racer'. 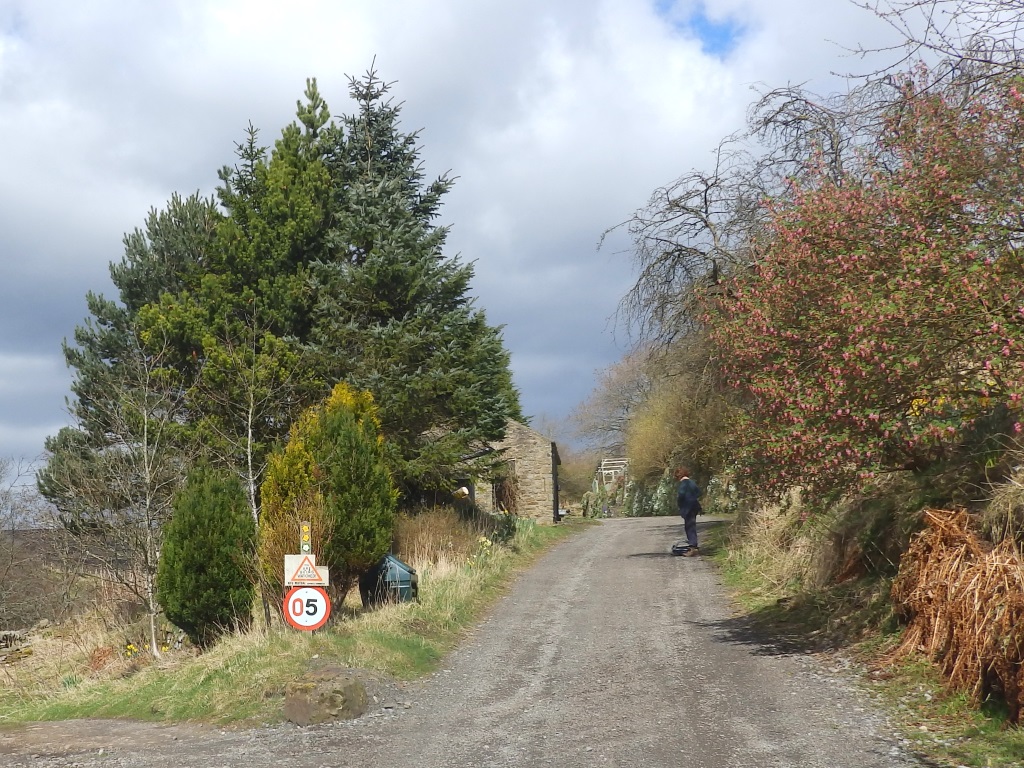 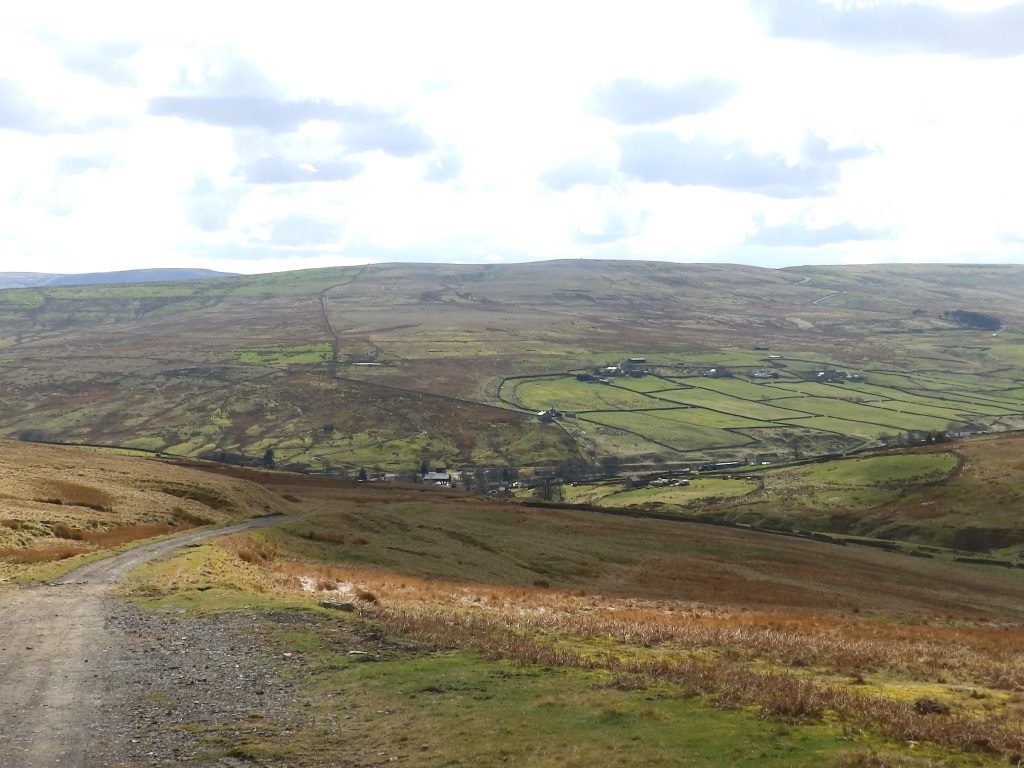 A fine view soon opens up back down to Rookhope and beyond giving plenty of time to pretend to reflect but really to catch your breath.

The track keeps straight as you gently rise, unlike the skylarks that parachute either side, not shown. There's not a rook to be seen, as yet, but something large in the heather on the right. The unmistakable, if slightly blurry, red grouse, of course. 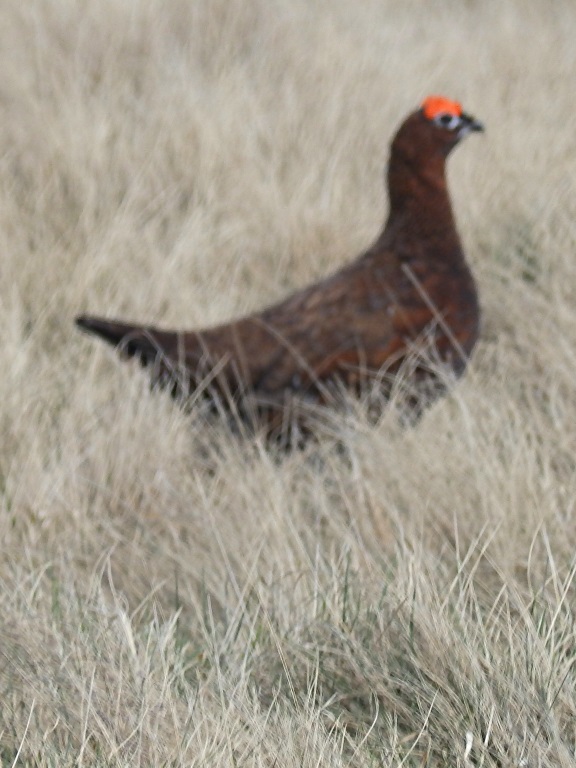 There are estimated to be around 250,000 breeding pairs in the UK although numbers are said to be on the decline. Yes, they will be if you keep going round shooting them? Toffs hunker in the bunkers[1] in and around here but what's wrong with a game of darts in the Rookhope Inn? They say that's a 'sport' as well.

An attached image of logos included the Co-op™ and LUSH™, surely not? It took a week to realise they were some of those not involved so sorry to both for the brief drop off in sales of hummus, Fairtrade wine and Bath Bombs.

After less than a mile, some mysterious looking doings as things begin to level out. This is what's left of the Standing Engine at the top of Bolt's Law Railway Incline. 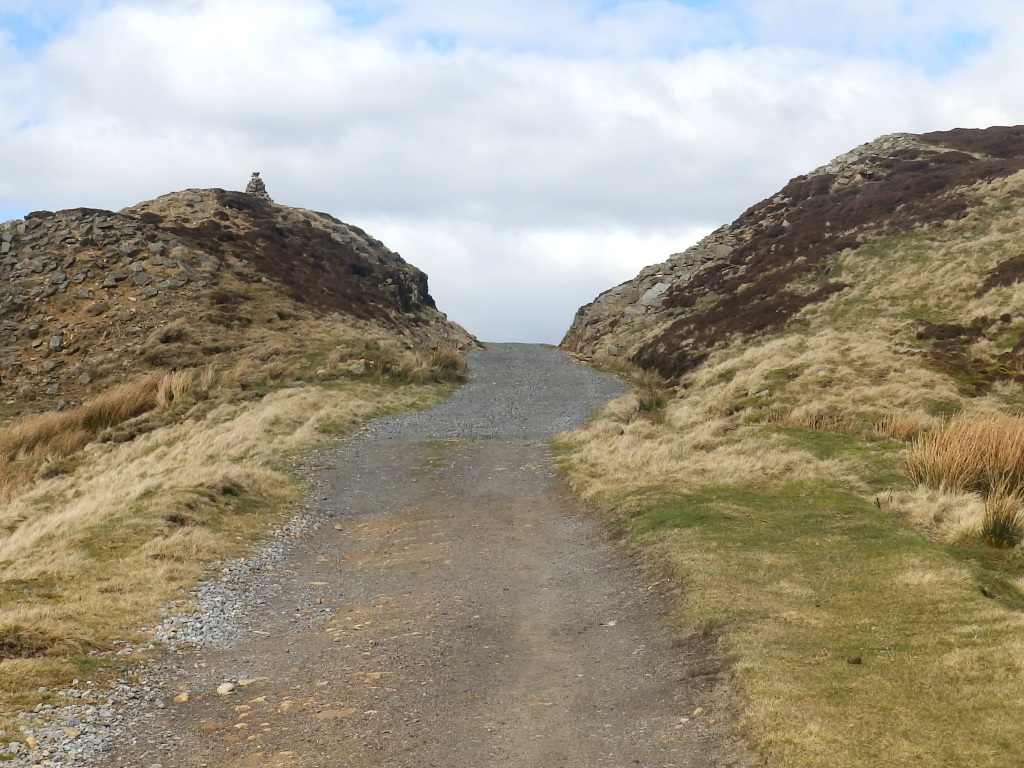 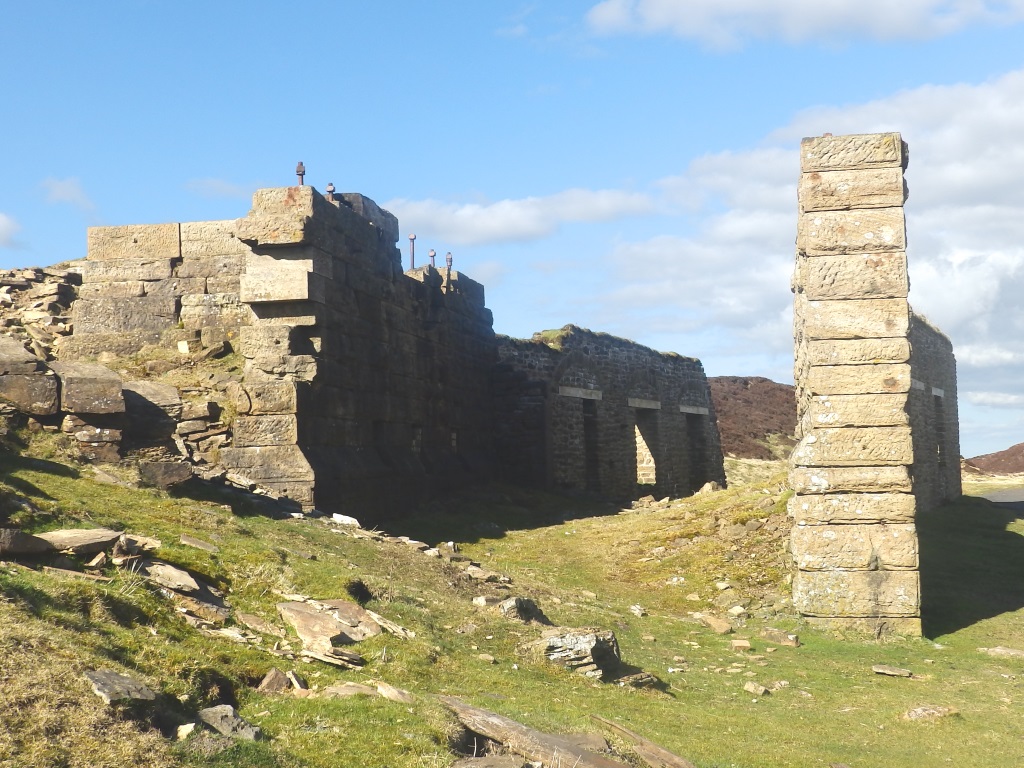 Yes, that track just followed up was once a wagonway and the stationary steam engine here was quite a pull.

Coal down, ore up or was it ore down, coal up? Either way, minerals made their way east to the Wear and the Tyne and at nearly 1700 foot, this can claim to be the highest-ever standard-gauge railway line in the UK although ' station' is pushing it a bit. 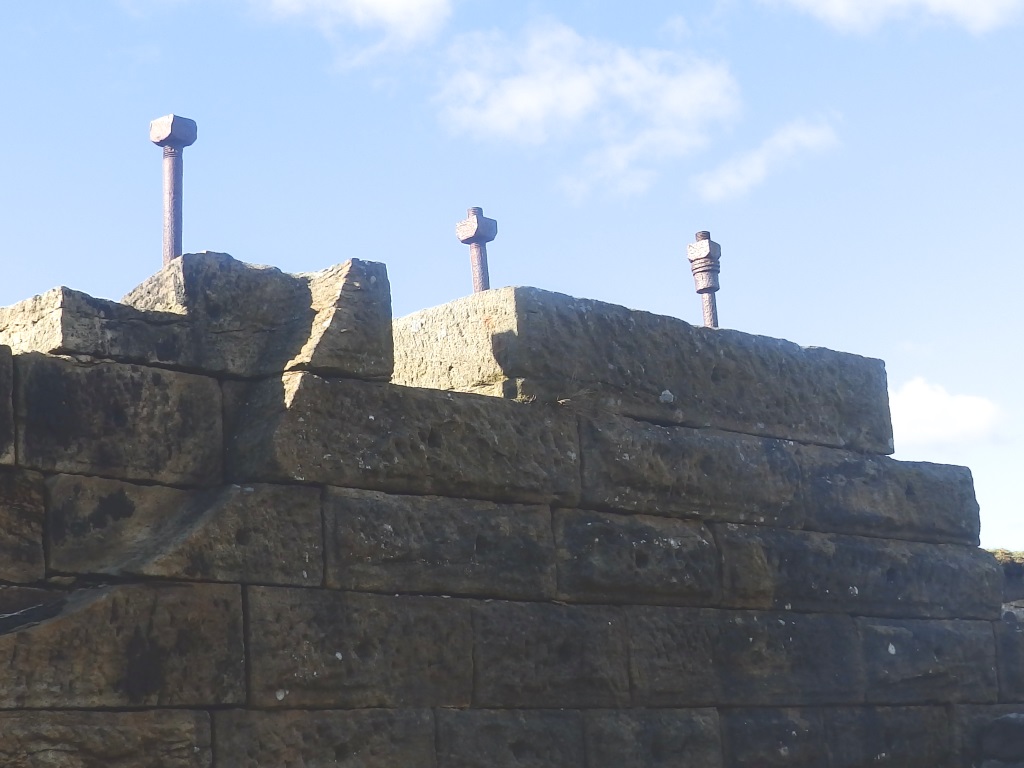 It lasted until 1923 by which time the lead was long gone and the cottages on your way here had to rely on the horse-drawn for their coal.

Don't believe it? Just read the information board then.

The course of the old railway swings round to the right and just as it does, look for the path on your left that cuts north.

When you miss that, carry straight on until there's another that leads you over some bog that will require diversions. This is around the time you'll wish you'd been quick enough to quip straight back at that lad outside the pub.

It's not known if arriving at this stile is a good thing or not. What is known is that you need to turn left to head for the triangulation station on top of Bolt's Law. 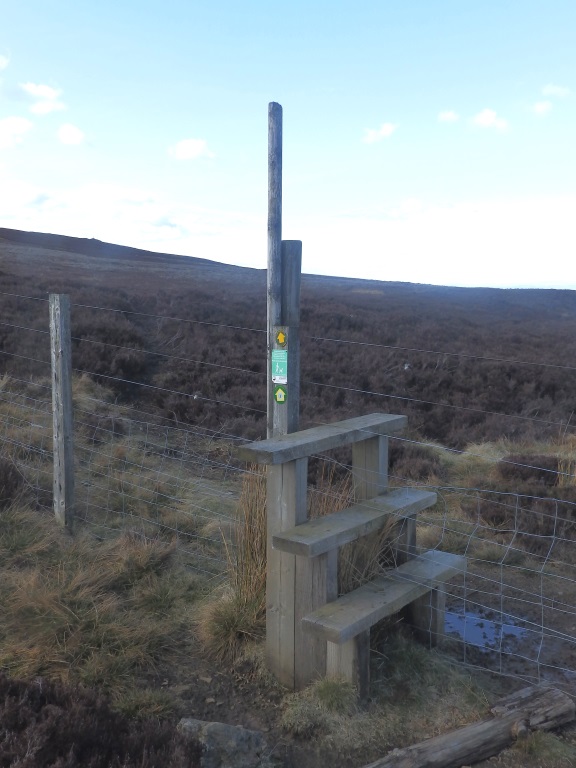 You'll get there eventually after a decent view down to Sikehead Dams, it's thought, and then through a gate with a gracefully posed grouse on it. 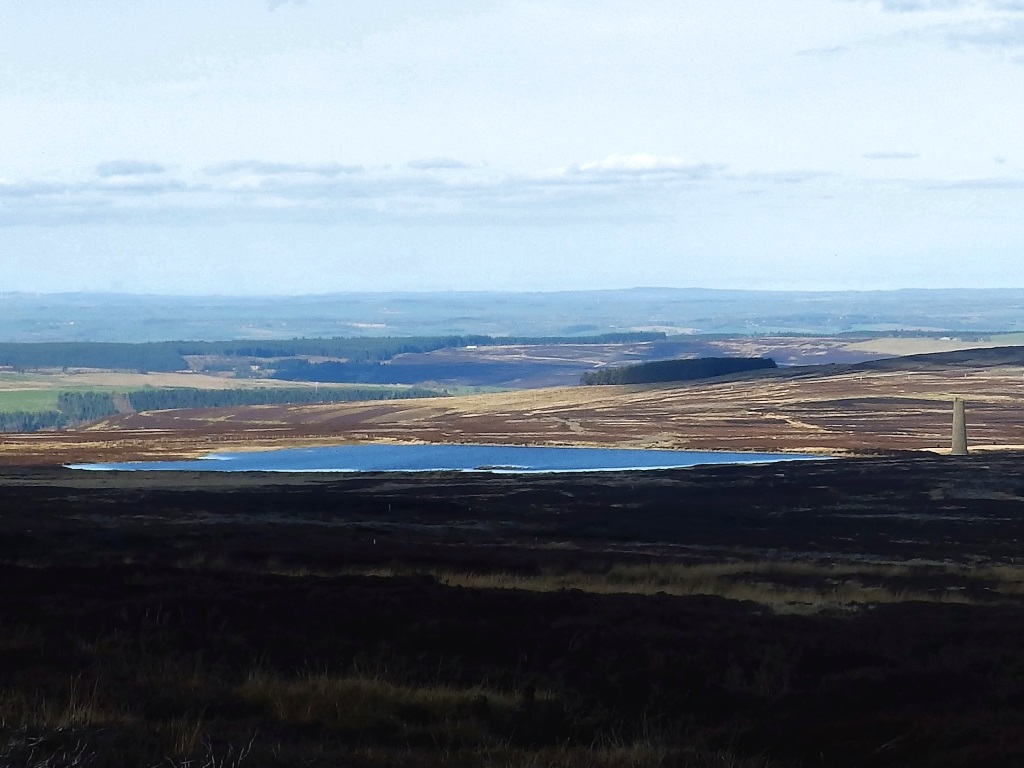 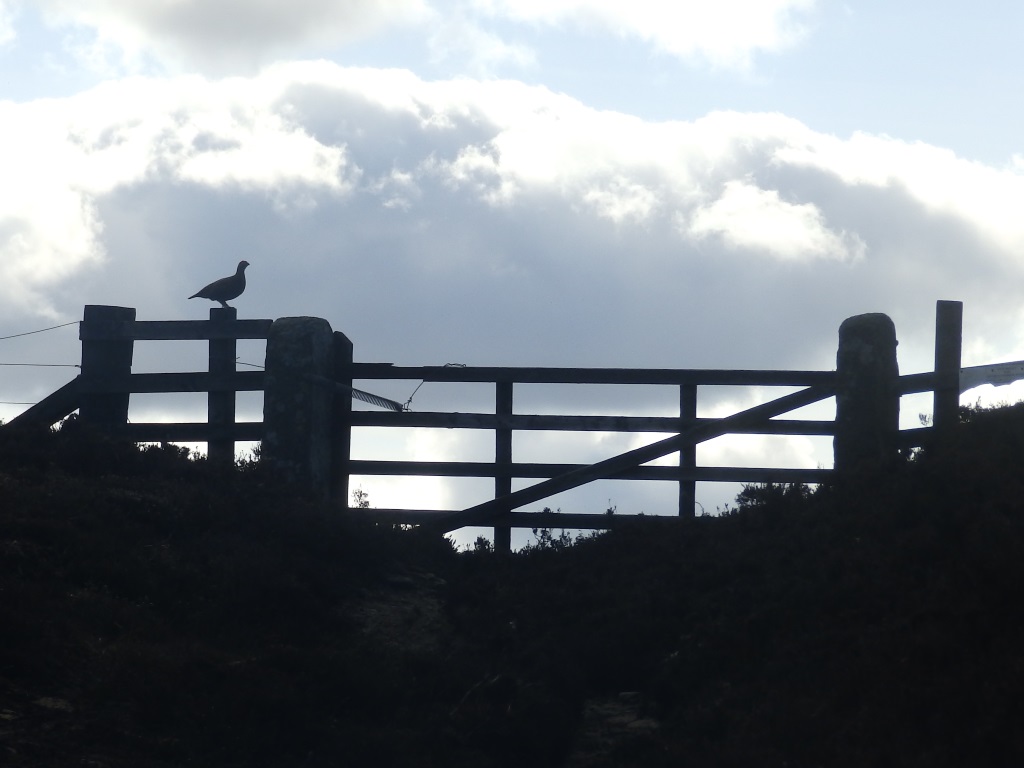 The trig point at Bolt's Law, not unreasonably, marks the highest point in these immediate parts and, as a bonus, there's also a 'currick', which is what they call a cairn in the North Pennines. 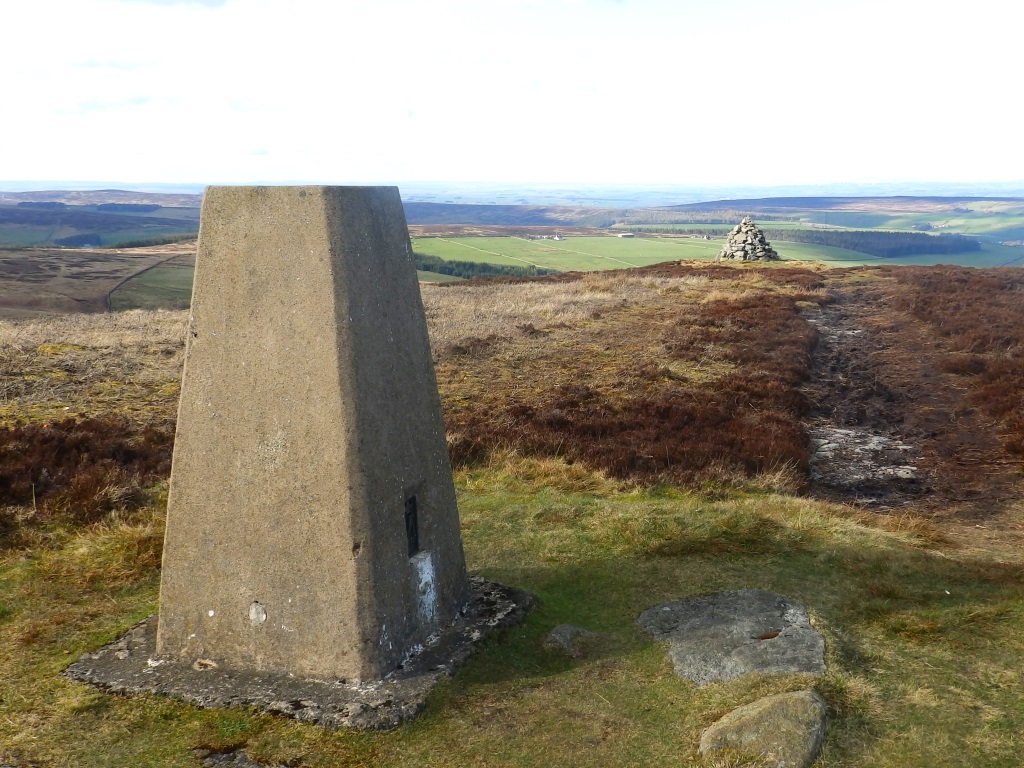 Since this is the highest point, it's all downhill from now although that last, lost half-hour might have you thinking the day had already started to go that way.

Downhill through the Newbiggin and Hunstanworth Estate, actually, although their intentions aren't so necessarily so environmentally friendly. 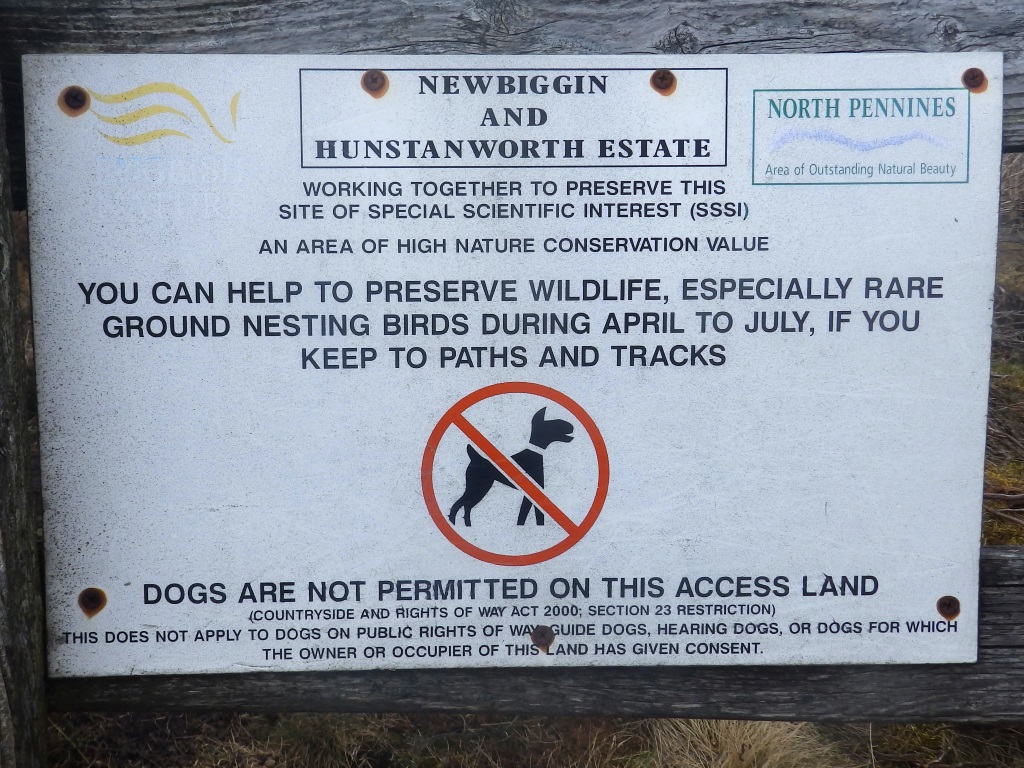 Ground nesting birds? That'll be the grouse, which aren't that rare, they just don't want them disturbed so toffs can keep paying a premium to take pot shots at the little breeders later in the year.

The pheasant was introduced to the UK around 1,000 years ago, which in evolutionary terms is the blink of a finger. The invention of the internal combustion engine is even more recent so it's excusable that they haven't evolved, just yet, to realise that bouncing off cars isn't a good survival strategy.

Red grouse, on the other hand, are native to the UK so they should have had a head start in evolving to not waiting until you're three foot away before panicking and whirring off in a right flap. They're pretty but stupid things and will have you very nearly siding with the toffs.

Another couple of miles of moorland to navigate but these tracks are easy to follow. You'll meet a minor road coming up out of Rookhope, which will make for an exhilarating drive north on your way back home later. 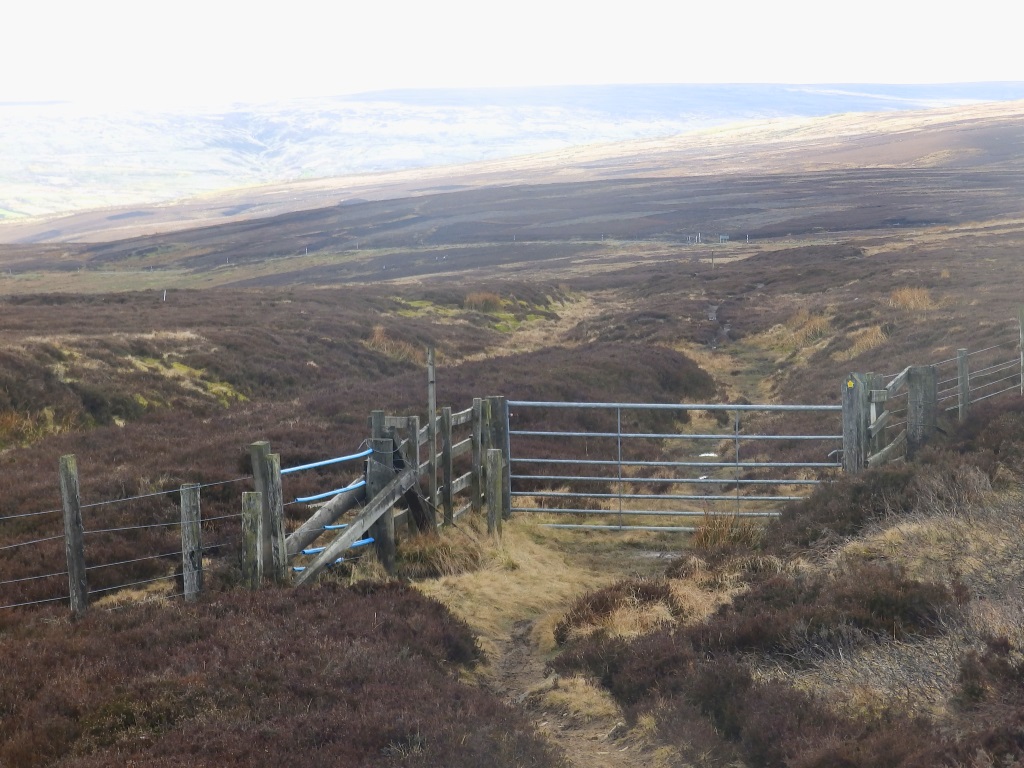 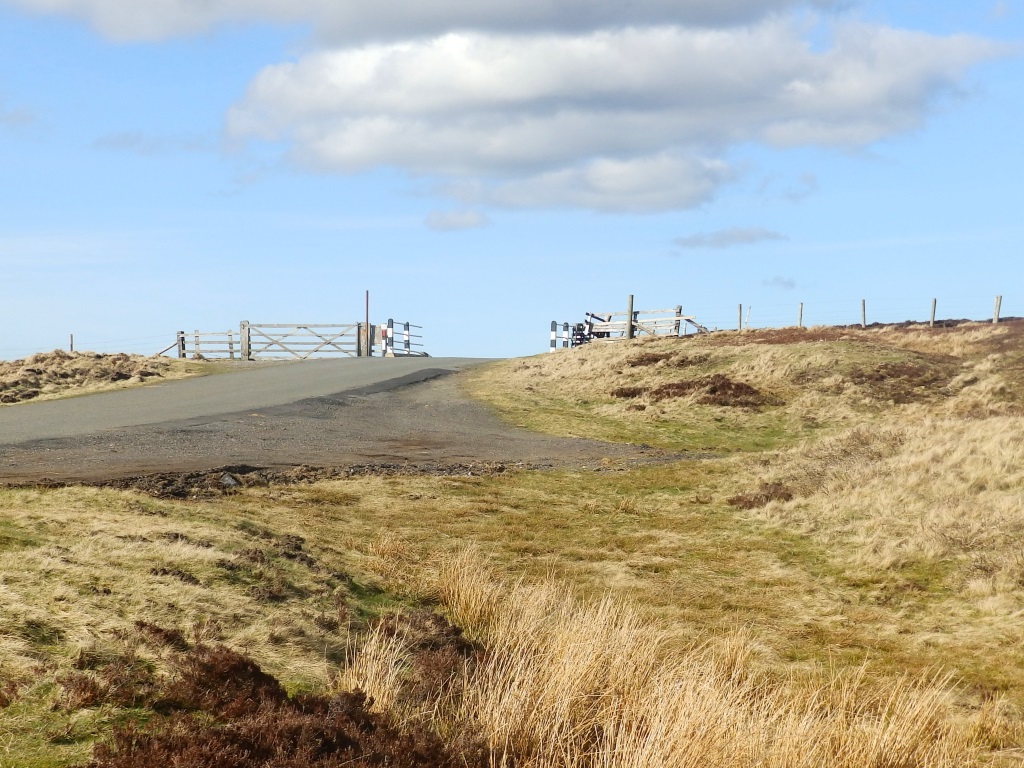 No other option but to walk along it although you can cut off a corner where lapwings and curlews are heard but not seen. A track past Bankfoot Cottage brings you just about back to the start at the arch.

Meanwhile, back in Rookhope, a rewarding pint. Look, there's that lad from before... 'Alright mate, remember you asked earlier if Bob was lost? What I meant to say was...'