What have Arbroath Smokies and this particular individual got in common? That's right, they've both been said to stink a bit, aren't particularly fashionable and they're not to everybody's taste. 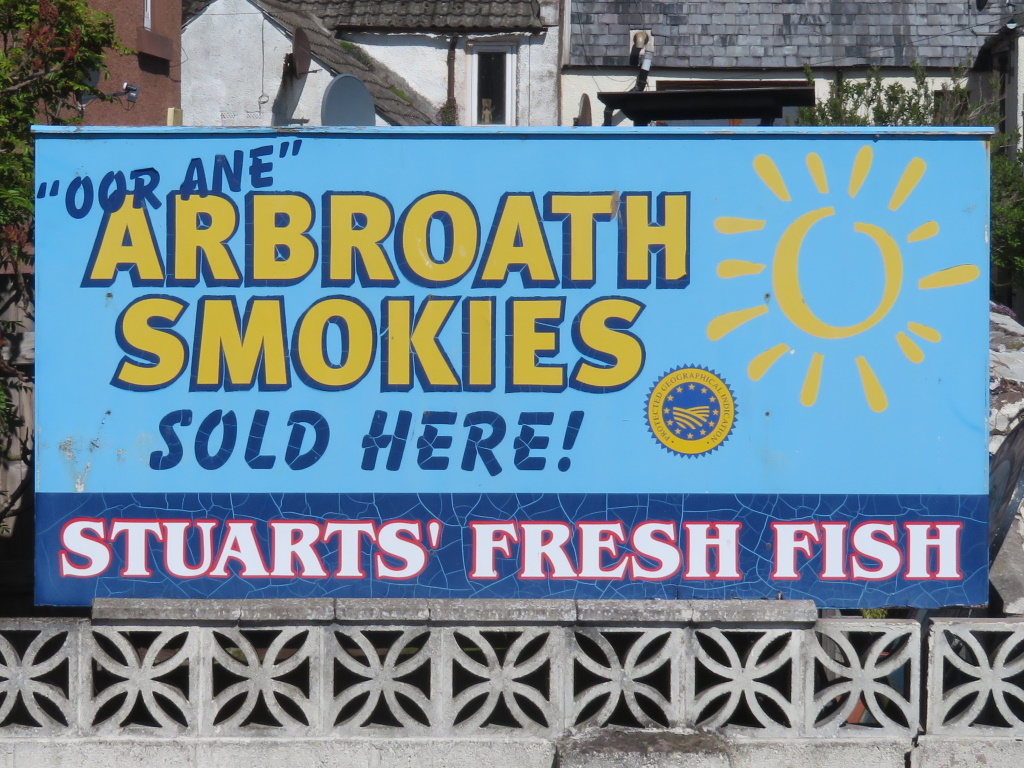 That much can be lived with so, with some apare time on a Sunday, let's try and get to the source and cure these aversions.

In that time it will be seen to be as much about the flax as the fish as well as eyes down for a game of obscure, Scottish football grounds bingo... Hoose!

The Hill Street Car Park won't leave you with the blues on a Sunday since it's free, you see. Head onto the High Street and turn left to wander down to the harbour like you didn't know there was one already?

There's an early temptation to be had at the Old Brewhouse, a building that bore the brunt of a bombardment of cannonballs in 1781. 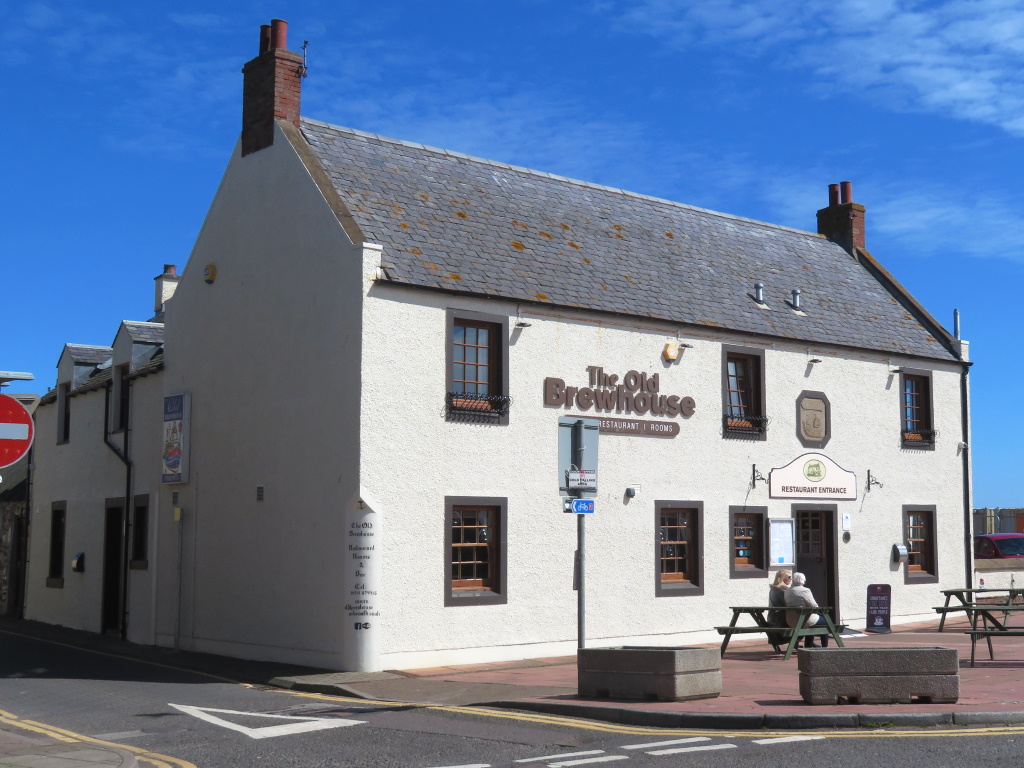 Flying under the French Flag, Captain William Fall, nothing more than a pirate, really, held the town to ransom for £30,000 but today's restaurant and B&B's fees are far more reasonable. 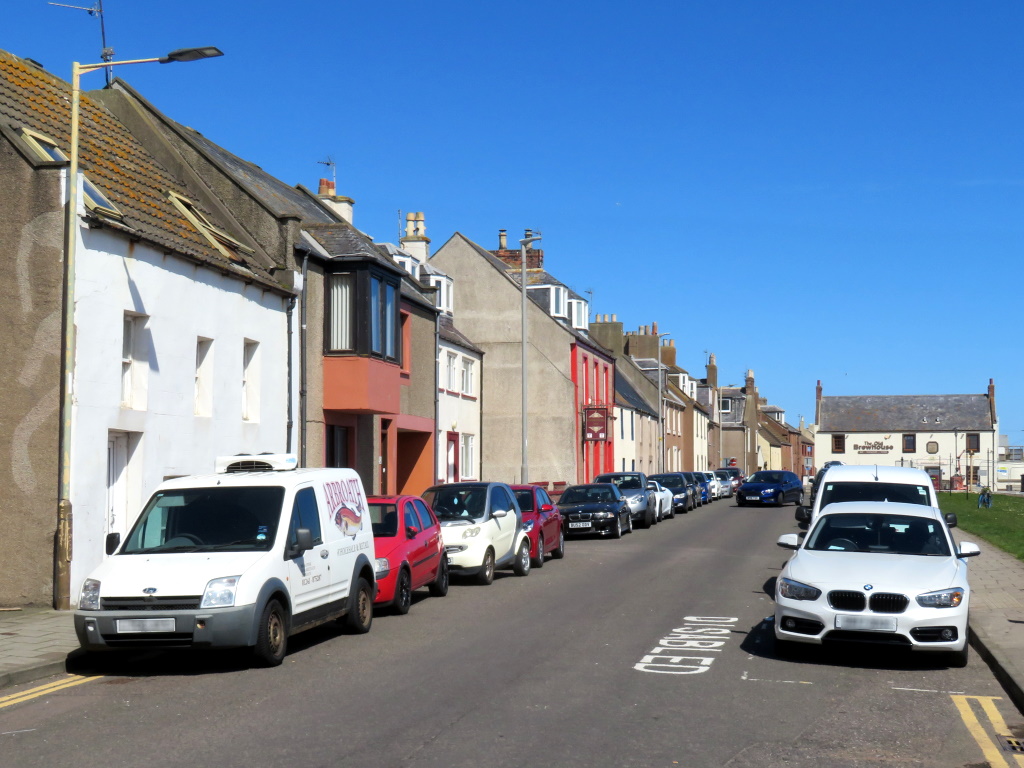 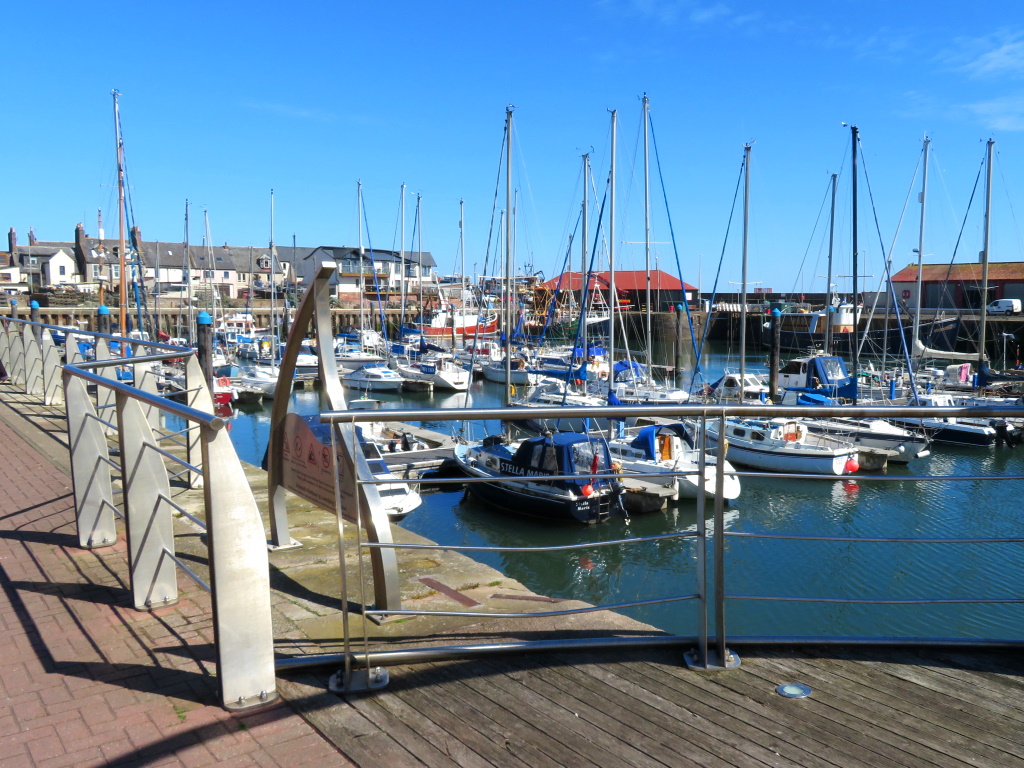 There's still a little bit of a whiff of the fishing industry along Old Shore Head although the filleters now number fewer than 50 and a lot of the landings have been given over to the leisurely.

There's a different kind of dwindling stock at the west end of the harbour, the now nearly extinct Scottish Visitor Centre. 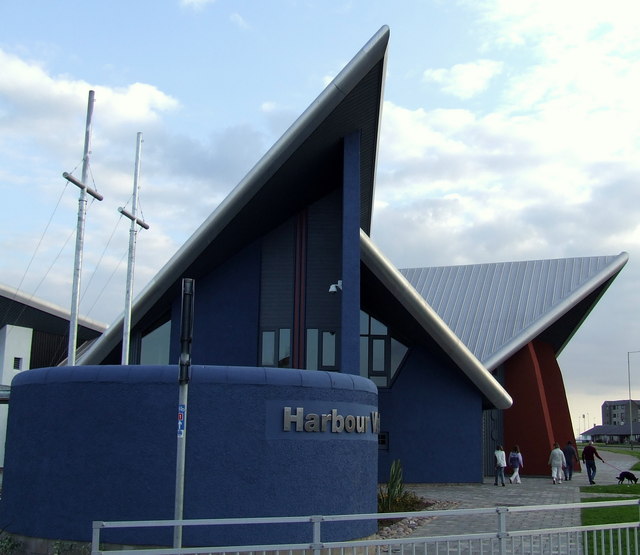 This modern amenity was a victim of falling visitor numbers and people's preference for the smartphone so you'll now have to head down to Dundee to be regionally, and personally, informed.

The Old Boatyard Restaurant, however, is still very much open with posh-noshter Michel Roux Jr, no less, popping in for a fish supper fairly recently.

While they're hardly competing, Michelin™-star-wise, their Smokie take on arancini is a clue to owner Marco Macari's Italian roots, probably.

It's not known if Mr Macari sources the smoked stuff locally but it's more than likely given there are still 10-or-so smokehouses in town. 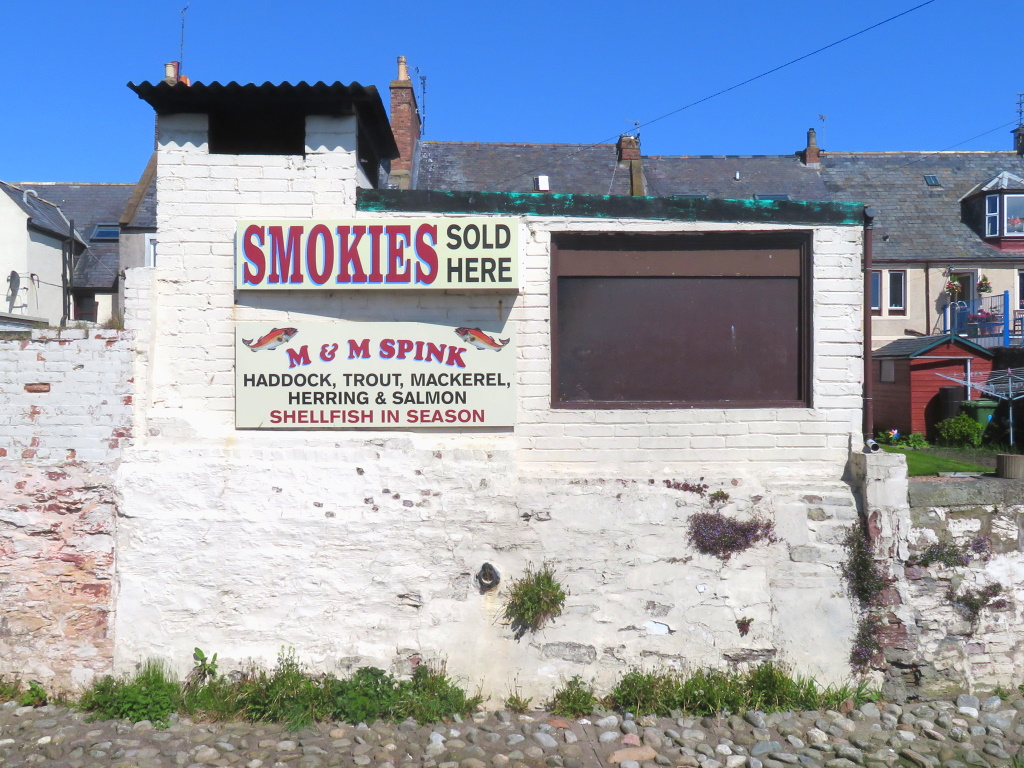 To be legitimately labelled as Arbroath Smokies they have to be produced within a five-mile radius but those EU regulations will be out of the window come the morning of 29th March 2019, sorry, 1st November, sorry, the 12th of whenever!

Then they'll be mass producing them in Manchester, say, but none can be made more traditionally, surely, than those fresh out of M & M Spink's outhouse whose Viking family lineage all adds to the authenticity, probably.

Beyond, what was, the Visitor Centre a coastal lea is home to Arbroath's Signal Tower Museum. 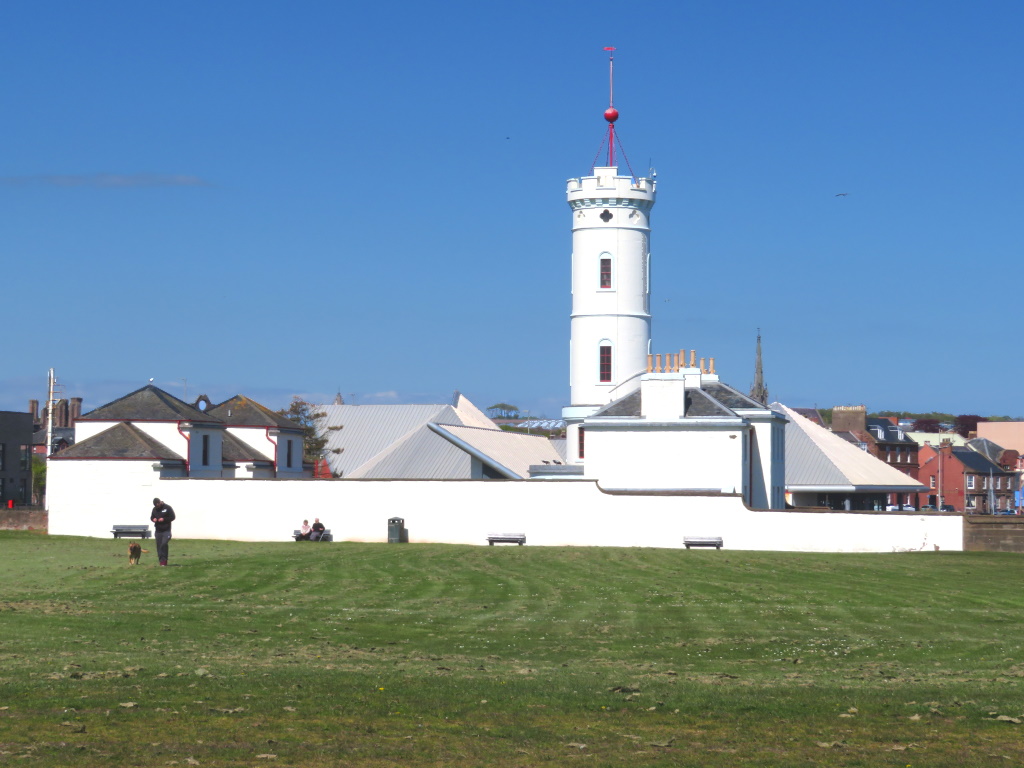 Originally the shore station for the, still-operational, Bell Rock Lighthouse, it's now home to some of Wille Faul's balls and all manner of fishy history although you'll have to take other peoples' word for that.

There's simply no time today for there's a far more interesting and adjacent attraction at Gayfield Park, where a different kind of sphere can often be seen flying through the atmosphere. 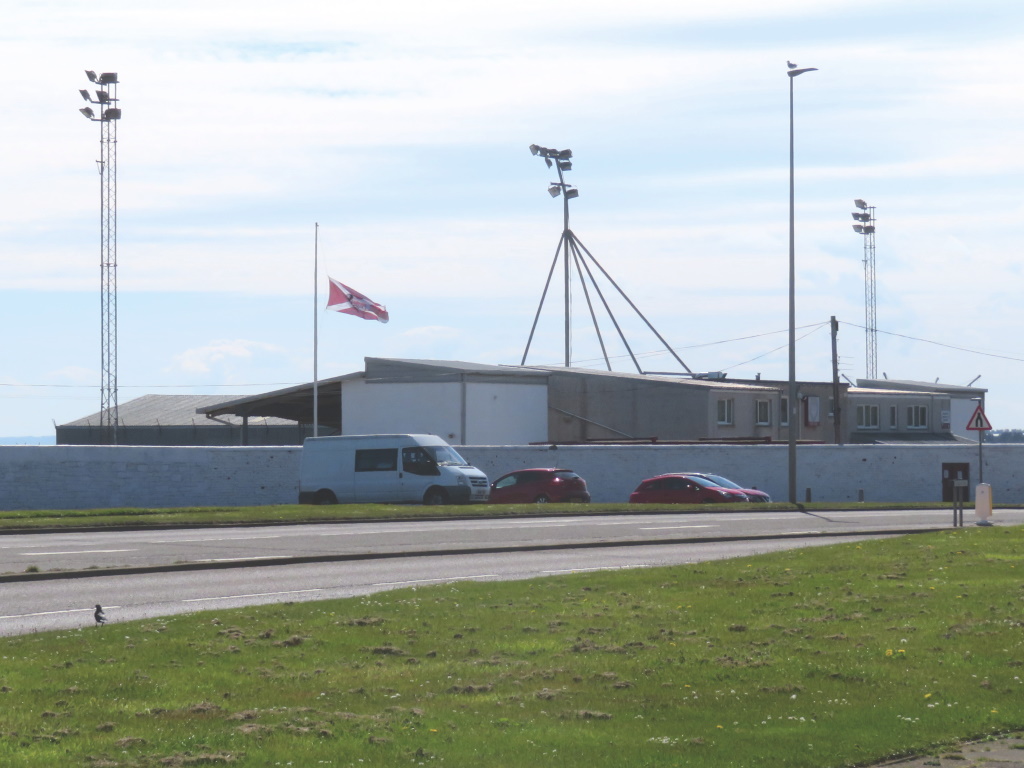 Home to Arbroath Football Club F.C., it's the site of their historic 36-0[1] victory in 1885 over Bon Accord, a team from Aberdeen for whom the horse and cart trip home must've been a hoot?

That's still a British record score although some fairweather NUFC fans are fearing something similar on their next excursion to the Etihad or even on Steve Bruce's return to Aston Villa, actually.

[1] A bad day all round for teams from the Granite City. Aberdeen Rovers lost 35-0 down the road in Dundee making for one epic episode of Match of the Day, sorry Sportscene up here, that night.

Just beyond the football ground, West Links Fun Park is a fine public space with a playground and a paddling pool. It's also home to Kerr's Miniature Railway, the oldest of it's type in... Scotland!

It only runs for half-a-mile unlike the full-size InterCity 125s flying past on the East Coast Main Line. As for the size, well, it doesn't even trouble the top ten, miniature-wise.

Bit of a shame that it's now no more, then, closed in 2020 due to a decline in numbers. It's still worthy of a mention because, well, who doesn't enjoy finding this out by clicking on links to miniature railways?

Careful now as you cross the busy A92 to pass by some indistinct dwellings but, up on the left, the eye is caught by St Vigeans Residential Home. 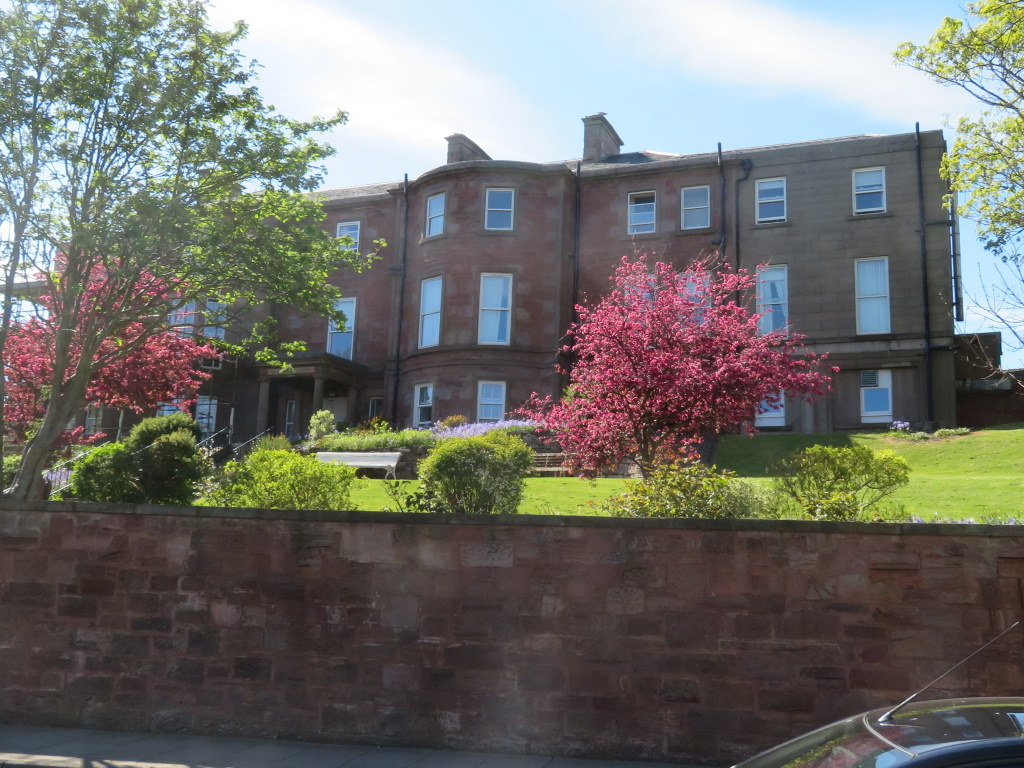 That's the name of the nearby village founded in the 8th-century by an early-Christian group who may have been more of a monastic cult, really. Isolated and confined to a life of meaningless routine, it's not thought the monks fared any better although that's a joke, of course, and remember, St Vigeans care so  you don't have to.

Just up and along is another imposing building, the Church of St Thomas of Canterbury, which isn't St Vigeans and is more RC than Methodist or monastery. 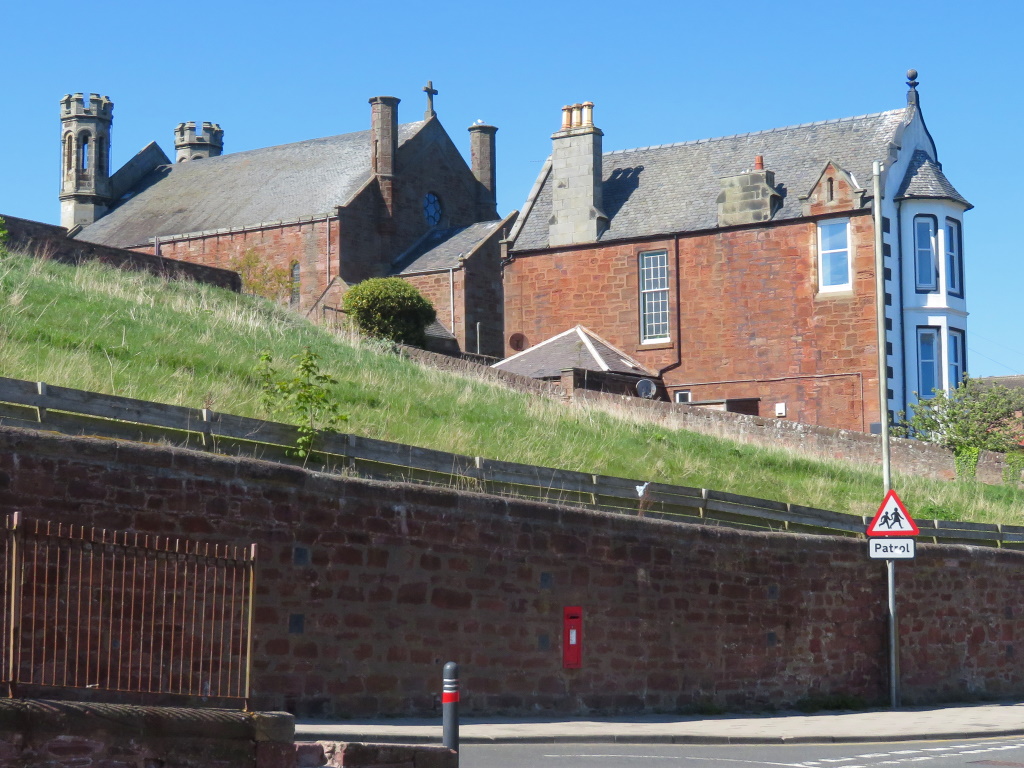 For no other reason than its address is given as Dishlandtown Street and you get up to it via Mount Zion Brae. If only the local Wetherspoon™s had been so imaginative with their naming but more on that in a minute.

Head further along Millgate Loan to turn left up West Port to an area known as, erm, Westport or Westport Village if you'd rather. 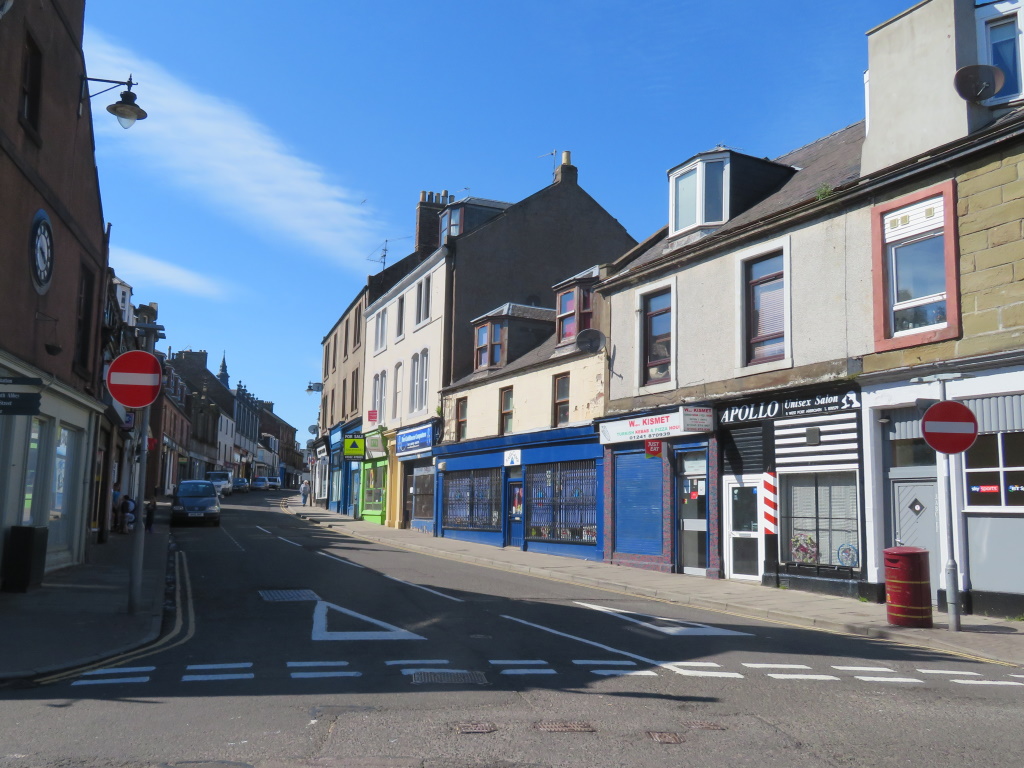 Home to largely local and independent vendors, a recent campaign to encourage locals to shop locally is centred along this street so that'll learn 'em down at the big Morrison™s and Lidl™s, hopefully.

One of the big selling points of Westport is the architecture, which sprouted up around the railway and still surrounds the town's Train Station. 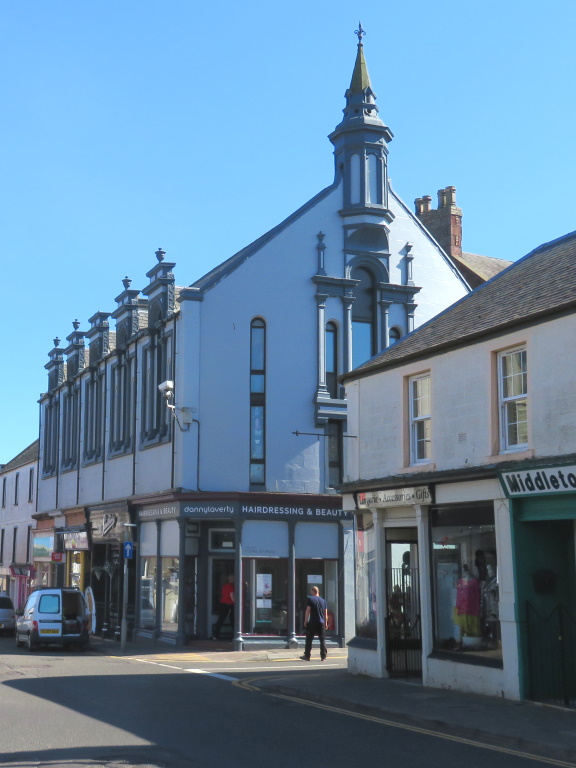 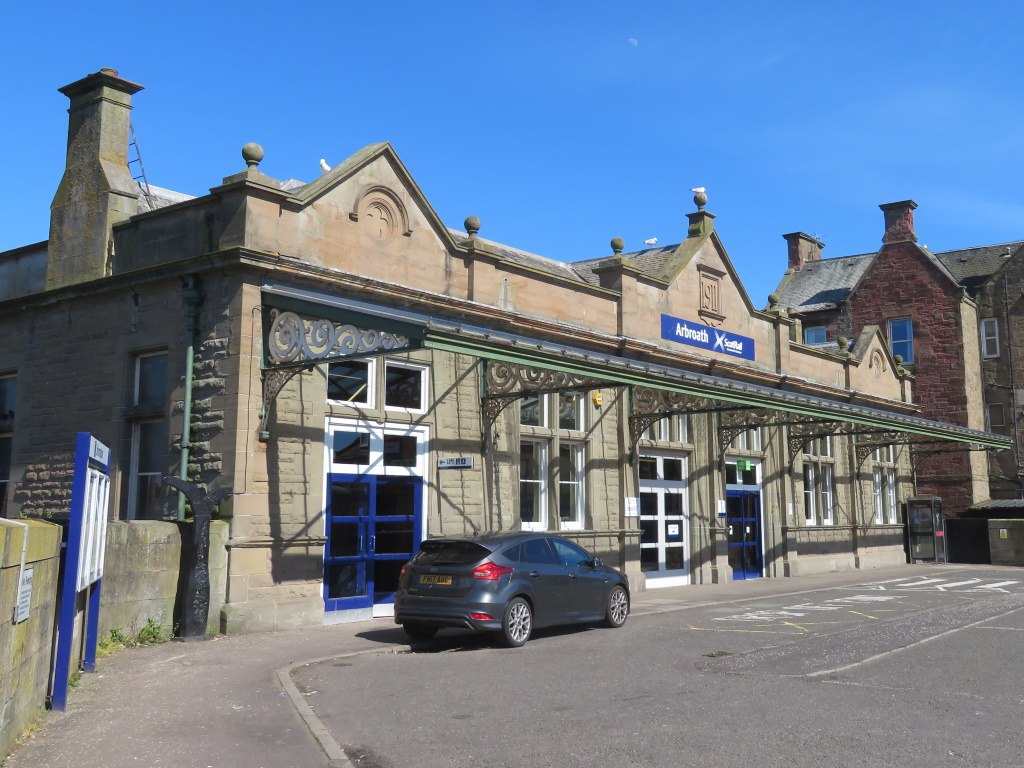 You can get directly to London from here in six hours and one minute[1], which is a minute more than it took Bon Accord to trundle back up to Aberdeen in 1885, probably.

[1] Six-and-a-half hours on average or just over nine if you plump for a pillow on the sleeper.

Some ruinous-looking doings loom in the, not-too-distant, distance but before you cross the dual carriageway over to Lidl™s, there's some unexpected, ex-workings that weren't hitched to the haddock.

Millgate Loan was an earlier clue and this former cotton mill looks to be the largest of what's left of at least 30 once employing several thousand, tactile with the textile, hands in town. 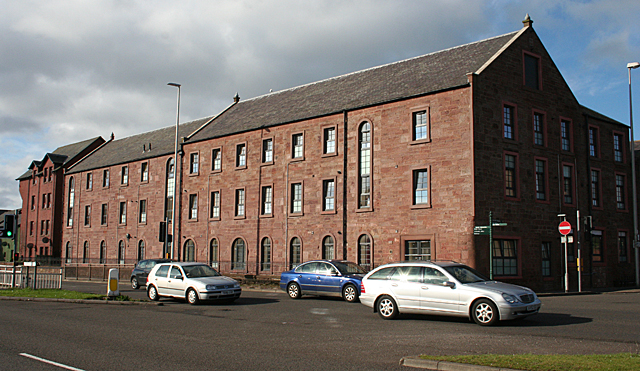 The Cutty Sark's sails were cut from this sturdy cloth, they say, so the old industry of Arbroath wasn't just about what went underwater.

Not that Tiddles will be getting any treats or tidbits today, T Browns & Sons' pet shop is shut but, since it's a Sunday, that's pretty much typical of any provincial high street. 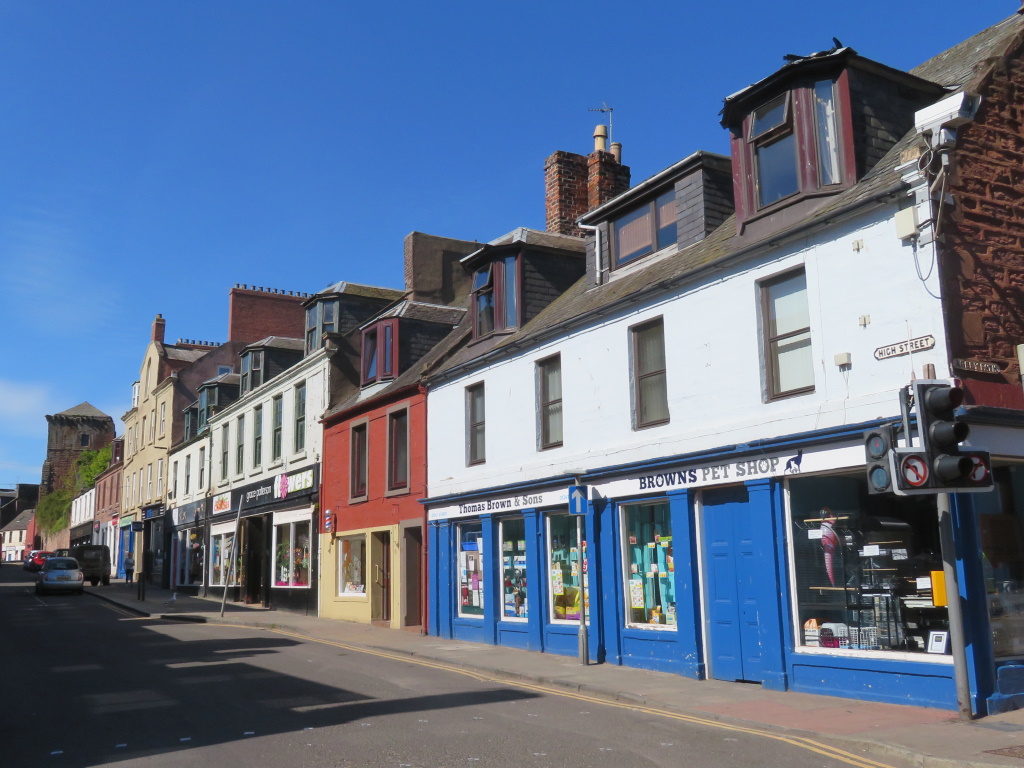 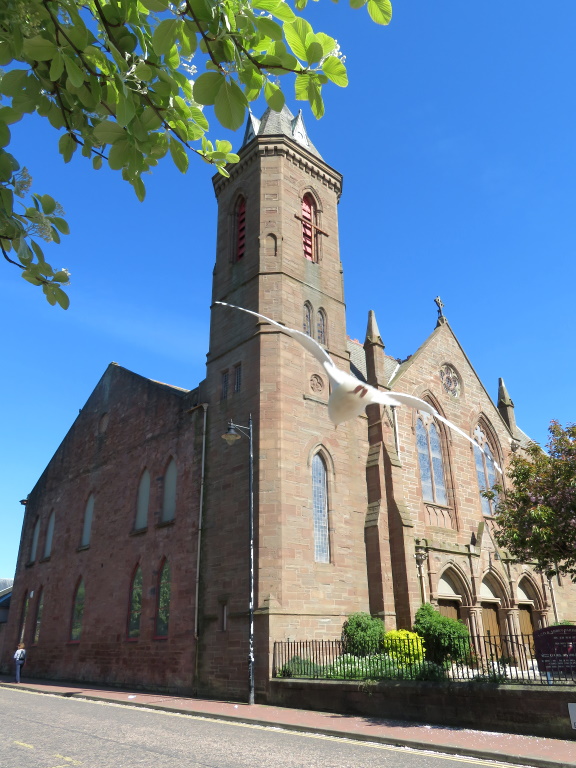 That just leaves the Old & Abbey Parish Church open for business so yes, Arbroath has an abbey since you ask.

Just before the dual carriageway on your way in from Aberdeen, all your favourite, family-baked savouries and sweets even if a Forfar 'bridie' is just a Scottish pasty, really. It looks like a 24/7 operation and there are even bouncers on the door for the pie-mad, post-pub crowd.

That leads to a downside, however, when a very different kind of sausage roll was on display one night making for headline stuff in the local rag.

Meanwhile, back at the abbey, Historic Environment Scotland™ will demand a fair few pounds for your entrance but their hedge isn't quite so high to stop you copping a peek for free.

That includes the 'Round-O', an impressive bit of early brickwork that would once have had some glass but Bell Rock would later go on to outshine it, lighthouse-wise. 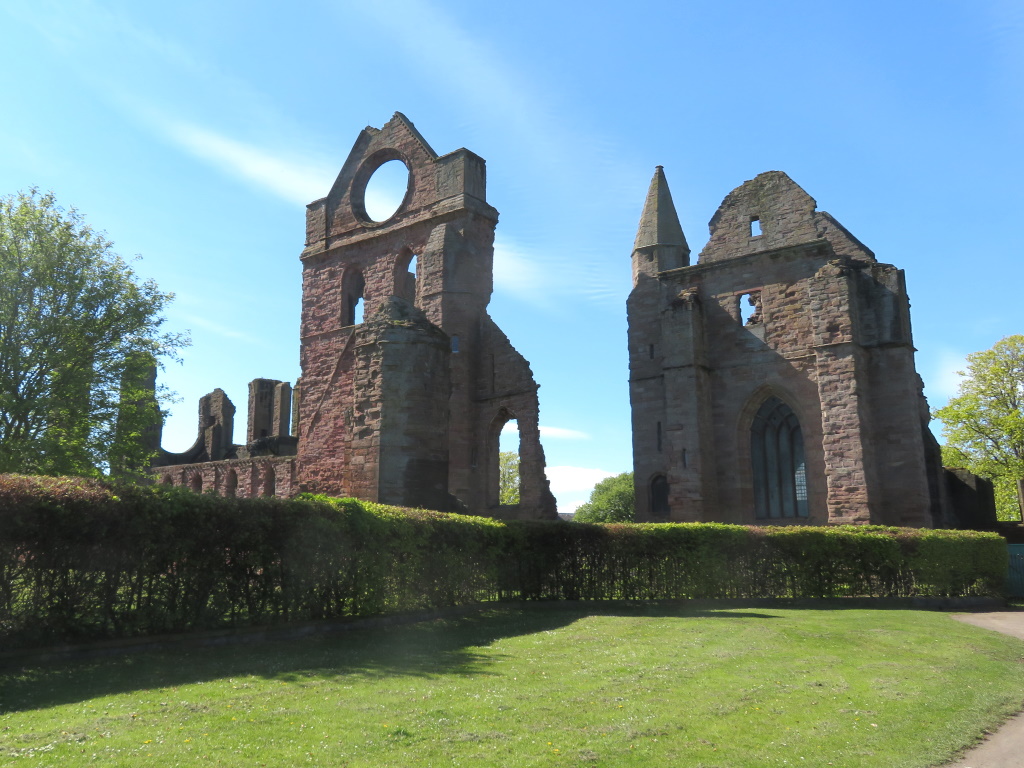 When King Eddie II, of England, got more than he bargained for at Bannockburn, a victorious Robert the Bruce started a campaign for Scottish independence and without resorting to a referendum. You might want to pull up a chair...

The Abbot of Arbroath penned a lengthy letter in Latin in the hope that the pope would reverse the Vatican's view on King Robert's rightful reign and Scotland's subjugation.

That wouldn't happen for another eight years, however, by which time Eddie III started fancying his chances and normal service was soon resumed over the border. Ultimately then, the 1320 Declaration of Arbroath made for as much wasted ink as there was on the super-toned torsos of that last lot who pitched up on Love Island.

An important period in Scottish history has just been skimmed over here but it's this flunker's version of events so you'll have to give Historic Environment Scotland™ those pounds to be filled in on the full story.

Either that or you could start watching Game of Thrones who look to have just nicked the best bits before going on to add some dragons and no, so please stop asking SlyBob if they've seen it, thanks.

Arbroath's main drag runs south of the abbey and east of Brothick Water with Aberbrothick how some old-timers can still be heard to pronounce the place, they say. 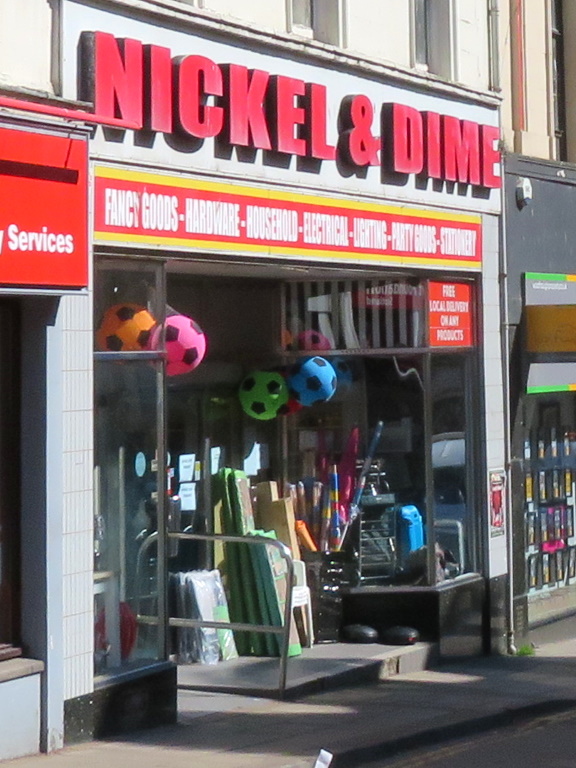 Most of the mid-19th-century architecture is intact and adapted for the likes of Nickel and Dime, a chain of discount homeware stores that you won't find south of Perth.

This provider of the low-priced and pliable has already been noticed in Nairn, Elgin, Inverness, Blairgowrie and Montrose[1] but the name is, quite frankly, unfathomable.

How about something a little more 'on brand'... MacPlastic™s? Macca's Placcas?

[1] Not that they've become something of an obsession, honestly.

Other highlights include the Webster Memorial Theatre, a converted arts venue that acts as Abroath's 'West End' as well as staging other exhibitions and performances. 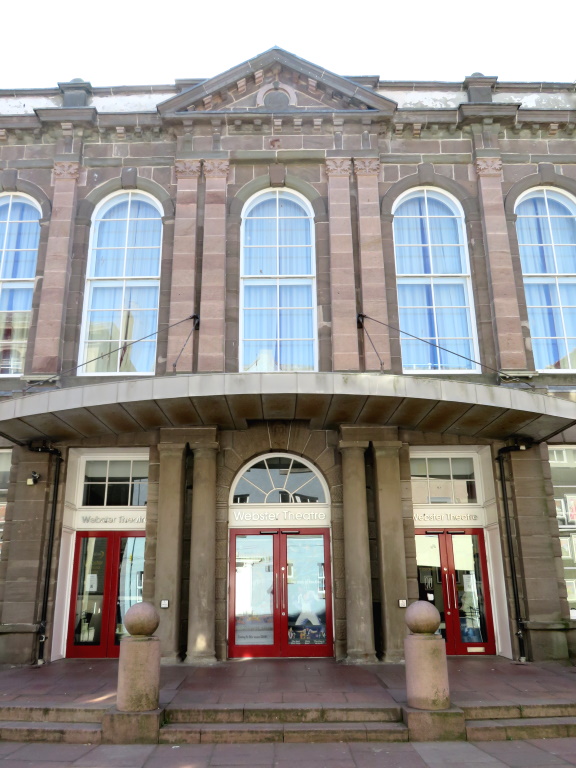 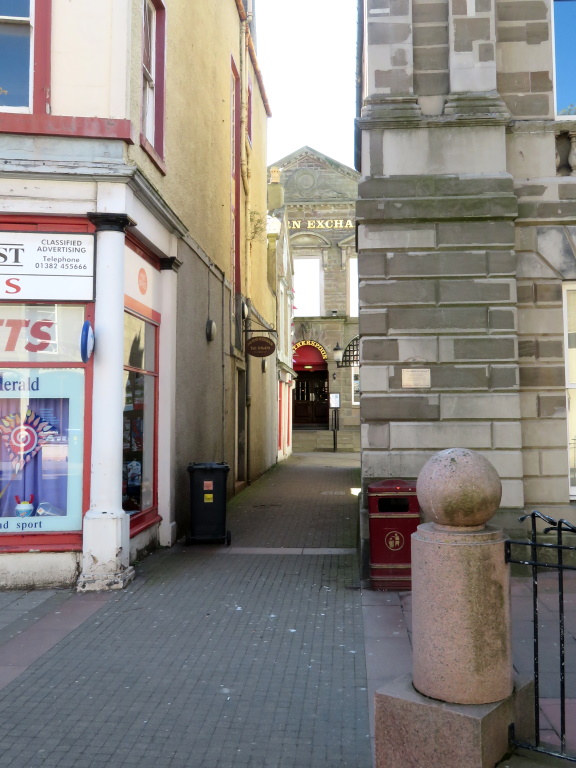 Just through the gap there, a glimpse of the old Corn Exchange and now home to, yes, you've guessed it, the inevitable Wetherspoon™s.

It seems that the corn didn't really catch on and the building only operated in that guise for a couple of years but the conversion to the Olympic Picture Palace clearly wasn't considered worthy by the 'Spoons and the corny name is getting a scornful (0/5).

It's only five minutes back to the car during which time this cultural commentator has realised that the Wetherspoon™s building is indeed unique and possesses some suddenly realised significance...

It's the only place in Arbroath, these days, where all the smoking is being done outside.